The NWSL is the home of many excellent footballers, such as former Manchester City Women midfielder Sam Mewis and Wales star Jess Fishlock. There are also many younger talents plying their trade in the league, such as Racing Louisville’s former Bristol City Women and Manchester United Women forward Ebony Salmon. Portland Thorns forward Sophia Smith is undoubtedly one of the best young players in the league, though, having joined the club as the top pick in the 2020 NWSL College Draft.

In this tactical analysis, we will look at what Smith gives the Thorns on the pitch, and how the 20-year-old fits into their tactics, analysing her ability to play on opposing defenders’ shoulders, her tendency to operate in wide areas, and her movement, which creates options for her teammates around the pitch.

Before beginning the analysis, we will examine Smith’s heatmap for this season so far, which will give us a good idea of the areas of the pitch that she frequents the most.

As Smith is a forward, it is unsurprising that there is colour inside the box. However, what is noticeable is that the most colour on the heatmap is on the right of the box, suggesting that Smith is more of a wide forward than a central striker. Therefore, we can conclude from this that she is a versatile forward, and this is why she has become such a useful player for Portland to have in their squad.

Playing on the shoulder

The first thing to look at in this scout report is Sophia Smith’s natural tendency to play on the shoulder of the opposing defenders. By doing so, she opens up the space behind for Portland Thorns to attack into, and constantly forces the defenders to run back towards their own goal.

Portland’s tactics under former Chelsea Women reserves coach Mark Parsons mainly revolve around transferring the ball up the field as quickly as possible, playing through the thirds. Here, against OL Reign, Crystal Dunn is looking to do just that, and Smith angles her body to run behind the defence as soon as Dunn releases the ball. In doing so, she ensures that she remains onside when the pass is made.

Smith always moves away from the ball when her team are attacking, which makes it harder for Portland’s opponents to close them down. It also means that Smith can recover the ball from opponents early on, with 77.8% of her recovery attempts in the opposing half this season being successful. This prevents the opposing side from launching rapid counter-attacks, so is one key thing that she brings to the team.

Here, against Houston Dash, the ball is further back, but the idea is still the same; Portland want to get the ball up to the attackers as quickly as possible. There is a player available in the middle to provide a link if needed, or the ball can go straight to Smith, who is in space and can meet the ball in the final third. Therefore, Portland have different options in their transitional play, with Smith’s positioning amongst the Dash defence giving them this flexibility.

Smith’s runs behind help her team in other ways too. Here, OL Reign have set up to control the central areas of the pitch, forcing Portland into a small channel out wide. Smith’s positioning allows Portland to continue their attack, so, again, she has helped her team to find the open space behind the defence. When she gets into these wide channels, crossing is not her strong point, with an accuracy of 9.5% from an average per game of 3.72 crosses, so this is something Smith can work on as her career progresses.

We mentioned at the start of this analysis that Sophia Smith is versatile, able to play on either wing or as a central striker. This section will show how she operates in the wide channels, and what it gives her team tactically.

We have already mentioned that Smith is generally the one making forward runs, but Portland tend to use a front two during games, rather than a single striker. This allows one player to drop back if needed, helping to win the ball, whilst the other stays higher up the field and occupies the opposing defenders. Here, Portland forward Morgan Weaver is driving centrally towards the OL Reign defence, and Smith sees this and remains in a wider position, staying out of the way and not crowding the ball.

This demonstrates her spatial awareness, and helps Portland to keep the pitch as big as possible when attacking. It also gives Portland a passing option on the wing if Reign’s defensive line proves too strong for Weaver to get through. Therefore, Smith being comfortable in the wider spaces is another reason she has been so crucial for Portland this season.

This is not simply a way for Portland to fill the spaces around the pitch though. Here, against Chicago Red Stars, Smith is shooting at goal from a wide angle, which turns into the opening goal of the game. She has so far got 46.4% of her shots on target this season, which doesn’t sound like a huge amount. However, because she shoots from different and often difficult angles, like the one in this image, her accuracy will always be lower than expected. What this image shows is the threat Smith poses when in different areas of the final third, and how Portland always carry a threat when she is on the pitch.

Smith has already made history in her short career, becoming the first player born in the 2000’s to play for the USA senior team, and her versatility helped her to attract their attention. USA head coach Vlatko Andonovski likes to play attacking football, with a front four seen in most of their games. Here, Smith is on the left of this setup, maintaining her width and not drifting inside too much, as this would leave the wing open for France to control.

However, Smith still demands the ball from her teammates, knowing she can attack the space ahead of her if she gets the ball, and this demonstrates the confidence she has, despite her relative inexperience. Her ability to play in a wide role gives the USA and Portland different tactical options in attack, because Smith can play in a front two, three or four, and this versatility is what managers like.

We have already looked at Portland’s transitional play, but they have a good tactical setup when in the final third too, as this image illustrates. Their front two in this game, Smith and Simone Charley, split to either side of the NY/NJ Gotham defence when the ball approaches the box. This allows the attacking midfielder, Canada legend Christine Sinclair, to maintain her central position and create a triangular structure, as shown by the red lines. The defence now has to spread out, marking both Smith and Charley, which creates a gap through the middle for Sinclair to shoot through and score, as the yellow arrow shows. This situation highlights again how Smith’s ability to play in wide positions helps her team’s productivity in the final third.

The final aspect of Sophia Smith’s play to look at is her movement around the pitch, which is another way that herself and her teammates create promising attacking situations.

We have already mentioned how the USA play with a front four, but the opposition take that apart at times by closing the ball down, as has happened here. This creates a gap in the middle, and Smith, in the black circle, runs forward to fill that space, completing the front four again. By moving into this position, she offers a short passing option for her teammate behind the defender, and is in a good position to then shoot at goal.

The key point here is that Smith’s spatial awareness helps her to see gaps and fill them, even if it is not where she was originally asked to play. This makes her a really important player, and someone that managers and teammates can rely on.

When in a central role, Smith shows plenty of confidence in tight spaces. This image shows how she is surrounded by OL Reign defenders, but stays calm, playing the ball into open space and opening her body up to shoot at goal.

The box is always a congested area of the pitch, with defenders and attackers constantly trying to dominate the space, so having a player who can operate in small gaps like this is important. Converting chances is something Smith can continue to work on, as she only scores 0.35 goals per game with an expected goals (xG) value of 0.38, but she definitely has the quality to score more per game as the season goes on.

Her small positional adjustments do not only come when she has the ball, but also when she is out of possession. Here, her teammate is looking to cross the ball into the box, with Smith initially in front of the Houston Dash defence. However, she sees a gap in their line and changes the angle of her run to move through and expose the space behind, giving her teammate a target to aim for with their cross. Smith has an average of 10.45 touches in the penalty area per game, and it is her excellent awareness that gets her into these areas, creating opportunities for her team.

We have looked a lot at Smith’s movements in the forward line, but she is just as capable at operating in an advanced midfield role. Here, she has picked the ball up from further out, dribbling it towards Argentina’s box. From there, she doesn’t shoot, as there are too many defenders around her, but plays a perfectly-weighted pass through to Alex Morgan, in the yellow circle, who scores the USA’s fifth goal of this game.

Therefore, Smith’s role in attack is not just to run ahead of the ball and shoot at goal, but also to drop back when required and set up teammates ahead of her. She has a passing accuracy this season of 56.6% and a dribbling accuracy of 61.8%, so this demonstrates a different side to her game, and another thing that helps her to fit into Portland’s and the USA’s tactics.

In conclusion, this scout report has shown how Sophia Smith is not just a central striker, but offers a lot more than some may first notice. Playing on the defenders’ shoulders, operating in wide areas and having good movement are all different things, and show the variety of options she brings to the team. Portland Thorns are unquestionably one of the stronger sides in the NWSL, having lifted this year’s Challenge Cup title, and Smith, with her undoubted talent and mixture of qualities, is one of the players who helps the Thorns to be such a formidable side. 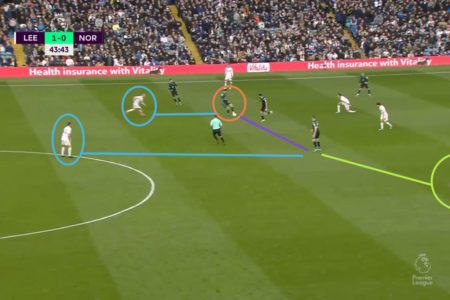 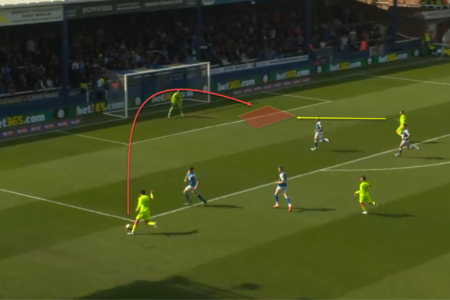