Sergej Milinkovic-Savic has been regularly linked with a move away from Lazio in the recent past, and with the transfer window on the horizon, the Serbian international is again generating a lot of media coverage with Paris Saint Germain and Manchester United reportedly keen on the in-demand midfielder.

At 25 years old Sergej is approaching his prime and he has proved himself to be one of the best midfielders in Serie A since moving from KRC Genk in 2015/16 when Lazio acquired his services for a £16.2 million fee.

During his five seasons with the Biancocelesti, the towering Serbian standing at over six foot two inches tall has been an ever-present figure in Lazio’s three-man midfield, totalling 150 league appearances and contributing with 26 goals and 18 assists. This season Sergej Milinkovic-Savic has played a total of 2,052 minutes of football in Serie A for Lazio, adding four goals and five assists as Lazio challenge Juventus for the Scudetto.

In this scout report, we explore the important role which Sergej plays for Lazio, examining the Serbians contributions across the defensive, middle and attacking thirds of the pitch through a tactical analysis.

This season Lazio have generally favoured a 3-5-2 formation under Inzaghi, as the Italian has utilised these tactics in 90% of matches in Serie A, in which Milinkovic-Savic has operated in the role of the box-to-box midfielder. 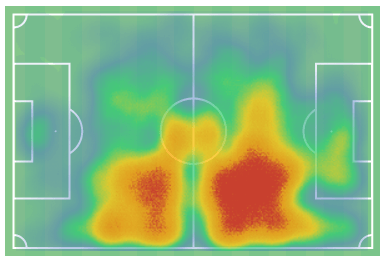 Looking at the Serbian’s heat map, you can see immediately how Sergej has an impact for Lazio across all thirds of the pitch, showing his effectiveness operating in the role of the box-to-box midfielder. His height also makes him an effective target-man in the attacking third, as he can often be found progressing further up the pitch into the opposition’s penalty box, providing Lazio with an additional aerial threat on attack. This versatility is an added bonus, making Sergej an important piece of Inzaghi’s arsenal, and we will explore this role in a little more detail further on. 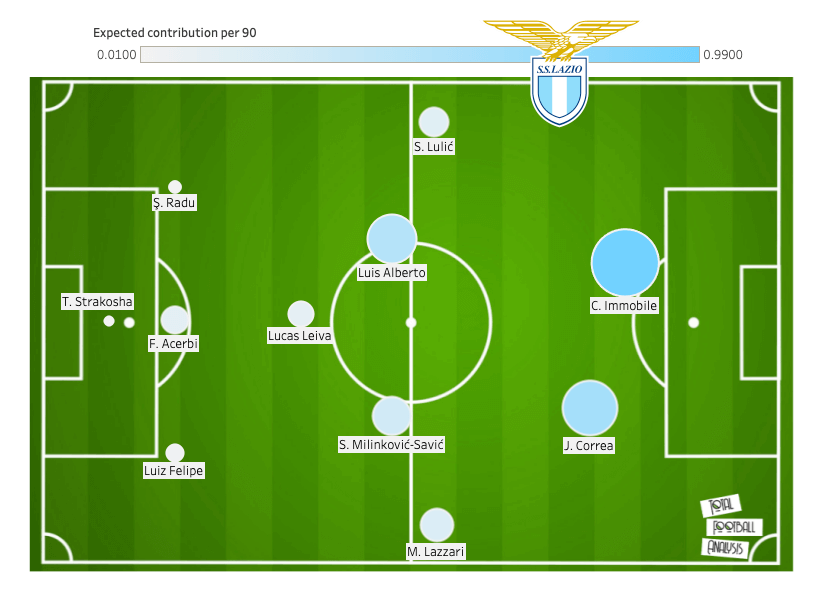 The above data visualisation highlights Sergej’s importance to Lazio, the player has an expected contribution (goals and assists) of 0.3 this season, which is the fourth-highest in the most frequently used starting eleven, with current Cappocannioniere Ciro Immobile leading the way with 0.99 contributions per 90.

Despite being deployed as a box to box midfielder, a player in the midfield position who is effective both at the attacking third and the defensive third of the pitch, Sergej Milinkovic-Savic offers Inzaghi an aerial threat in the attacking third and can often be found in advanced positions. Inzaghi’s tactics in relation to allowing Sergej the freedom to act as a target man has paid dividends across the 2019/20 season.

In order to display how unique Sergej is as a midfielder, we have conducted a data analysis against a sample of all central midfielders in Serie A, who have played more than 900 minutes for their team in 2019/20. The analysis covers three metrics, passes to the oppositions penalty area, touches in the box, and Aerial duels per 90. 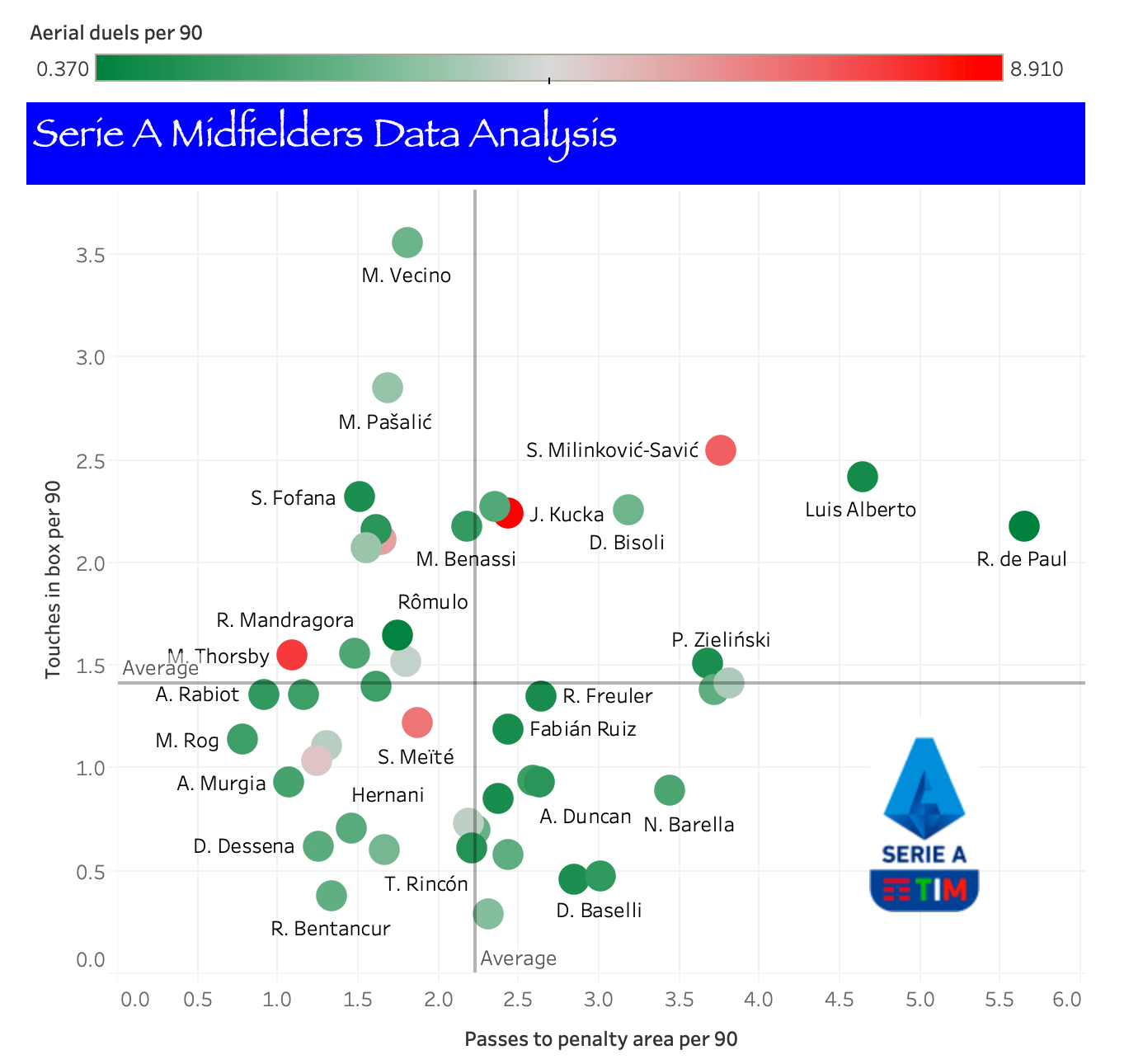 Carrying out an analysis on the above data visualisation, you will see that the Serbian is performing above average with 3.76 passes into the penalty area per 90. This credits his ability to progress the ball into areas with a high expected goal (xG) value, highlighting his creative side and threat to the opposition when in possession in attack.

Sergej also is in the top three midfielders in relation to the number of touches he takes per 90 (2.55 per 90) in the opposition’s penalty area. This figure credits his ability to advance deep into the attacking third to influence the game.

Finally, Milinkovic-Savic also is averaging 7.15 aerial duels per 90, this output is what makes the midfielder so unique, with the majority of the players performing above average in relation to the other two metrics scoring low on this metric, the one exception being Juraj Kucka of Parma.

Examples of Sergej Milinkovic-Savic demonstrating his aerial qualities can be seen below, firstly against Inter.

In the above image, Inter are set up in a compact bock and are looking to force Lazio to play from the outside of the pitch as they have left Jony open in the wide vertical channel. Noticing that Inter are looking defend their right side, Milinkovic-Savic makes a run behind Milan Skriniar, having faith in Luis ‘The Magician’ Alberto to find him with a pass.

The timing of the Serbian’s run and the brilliance of Alberto’s ball causes mass confusion in the Inter penalty area. A backpedalling Skriniar collides with goalkeeper Daniele Padelli, allowing Sergej to compete for the second ball, winning the aerial battle against Diego Godin. Inter’s Stefan de Vrij then fouls Ciro Immobile giving away a penalty, and we can see that all three mistakes on Inter’s part are caused by the brilliance of Milinkovic-Savic.

Below against Cagliari is another example of Milinkovic-Savic making himself an option in the opposition’s penalty area. Cagliari are set up in a compact block (4-2-3-1) with Nahitan Nandez and Artur Ionita operating as the double pivots, shuttling the space between the defensive lines to make it hard for Lazio to attack through the middle of the pitch. The awareness of Milinkovic-Savic to run into the Cagliari box behind Ionita, who is focusing on the movement of Joaquin Correa, highlights the awareness of the Serbian international.

Milinkovic-Savic is able to progress into the box at the back post completely unmarked, due to Joao Pedro’s lack of desire to track the Serbian. This allows Senad Lulic the option to deliver a high cross towards the towering Serbian at the back post, this attacking rotation can often be seen watching Lazio, who will often attempt to get players close to Milinkovic-Savic to attack the second ball. 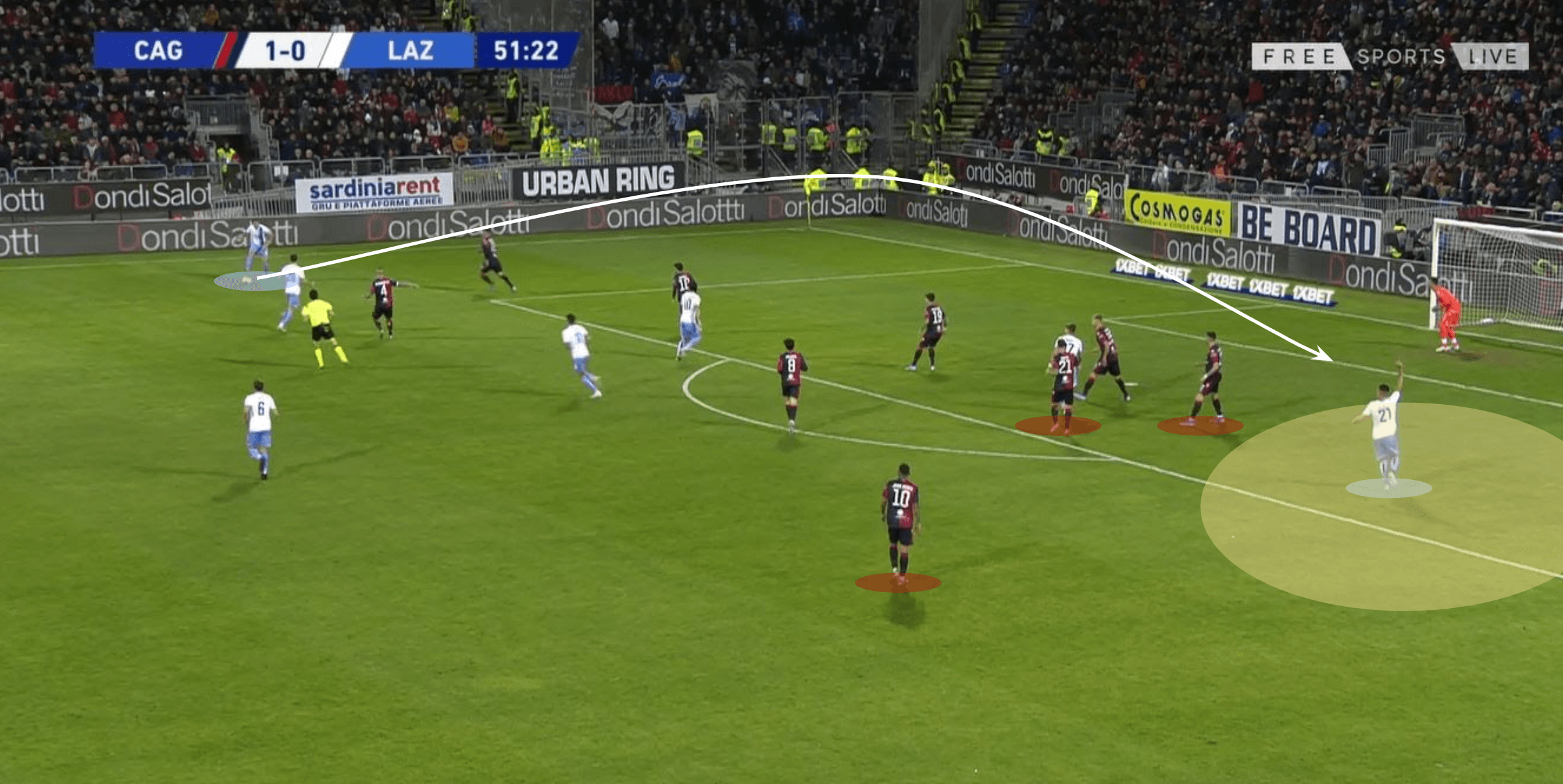 Milinkovic-Savic is a powerhouse of stamina, he has the ability to constantly create chances for Lazio’s more attack-minded players (Luis Alberto, Ciro Immobile, and Joaquin Correa). Being able to progress the ball further up the pitch is another role of the Serbian under Inzaghi’s tactics who demands that Sergej has an impact on the attacking/transitional phase of the game. 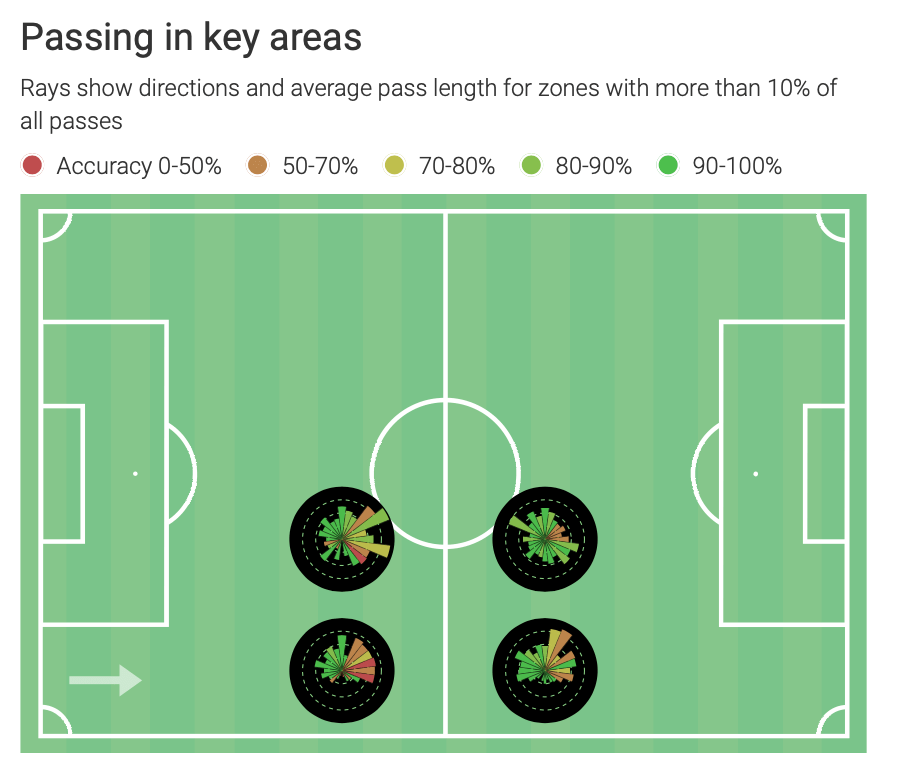 Firstly, an analysis of Sergej’s passing in key areas leads us to the conclusion that the Serbian is an effective passer of the ball. The midfielder has a diverse passing range which is reflected in the above radars showing that Sergej is more efficient when passing the ball from the half-space rather than from out wide. The Serbian can often be found taking possession in the half-space, where he has a pocket of space in which to use the ball, often playing the ball beyond the defensive line.

Further analysis of the Serbian’s ball progressions over the past year show that he favours progressing the ball with a pass rather than opting to dribble. This tendency certainly is of benefit to Lazio as centre forwards Ciro Immobile and Joaquin Correa are both not short of speed, making the progressive pass the quickest way to move the ball to them. Impressively, Sergej has completed 100% of passes over 40 metres over the past year. In fact, he has a pass accuracy of over 90% for all passes over 20 metres, making him the king of progression.

An example of Sergej’s ability to play a long pass can be seen here against SPAL, the midfielder is on the ball in transition and has multiple options available to him. SPAL are retreating as they look to assemble their defensive shape, this means he could have dribbled the ball up the pitch, he also had the option of progressing the ball to his right and the run of Manuel Lazzari. However, the confidence in his own ability at playing a successful long pass meant his option was to deliver a pinpoint pass 30 metres into the space behind the defence for Ciro Immobile.

As we move the play further along, Milinkovic-Savic can be seen making a late run into the vacant space which has been created by the movement of Bobby Adekanye. It is a credit to the midfielder’s iron lungs and desire to have an impact on the game in the attacking third.

In the below image, we can see another example of Sergej’s ability progressing the ball. Again, against SPAL the Serbian can be seen in a large pocket of space, demanding the ball. The midfielder constantly scans the pitch, looking over his shoulder two or three times between the moment the pass leaves Lucas Leiva’s feet and him controlling the ball. This awareness highlights the player’s ability to process information, aiding his decision making.

The scanning of play enabled Milinkovic-Savic to decide he had enough time on the ball, due to the lack of SPAL’s press. This enabled the Serbian to turn on the ball, attack the defensive block and then progress the ball out wide into space for the electric Manuel Lazzari.

Box to box players can also be looked at like an extra defensive cover for the team. Before the defence can be tested, the opposition has to progress past the box to box player. Sergej under Inzaghi has two different roles in the defensive phase. When the ball is played down Lazio’s right-hand side, Sergej’s role is to press the opposition and close off passing lanes through the middle of the pitch.

When the opposition attack down Lazio’s left-hand side (above), Sergej Milinkovic-Savic can often be found dropping into his penalty area, and it is from this position that he acts as an additional central defender. An example of this can be seen in the above image against Roma, where Sergej can be seen man-marking Edin Dzeko. This tactic allows Francesco Acerbi and Luiz Felipe to adopt zonal marking, giving them the freedom to attack the ball when it is delivered by the opposition.

The Serbian can also often be found breaking up play by putting pressure on the opposition, often using the second ball as a pressing trigger. In the above image, late in the game against Inter, there are 10 players crowded in the Lazio area. Milinkovic-Savic, using his ability in the air to win an aerial duel, forces the ball out of play to secure the victory. It’s small details like this which win teams points, as Milinkovic-Savic took control of the situation, not allowing Inter the opportunity to play one final ball into the box. 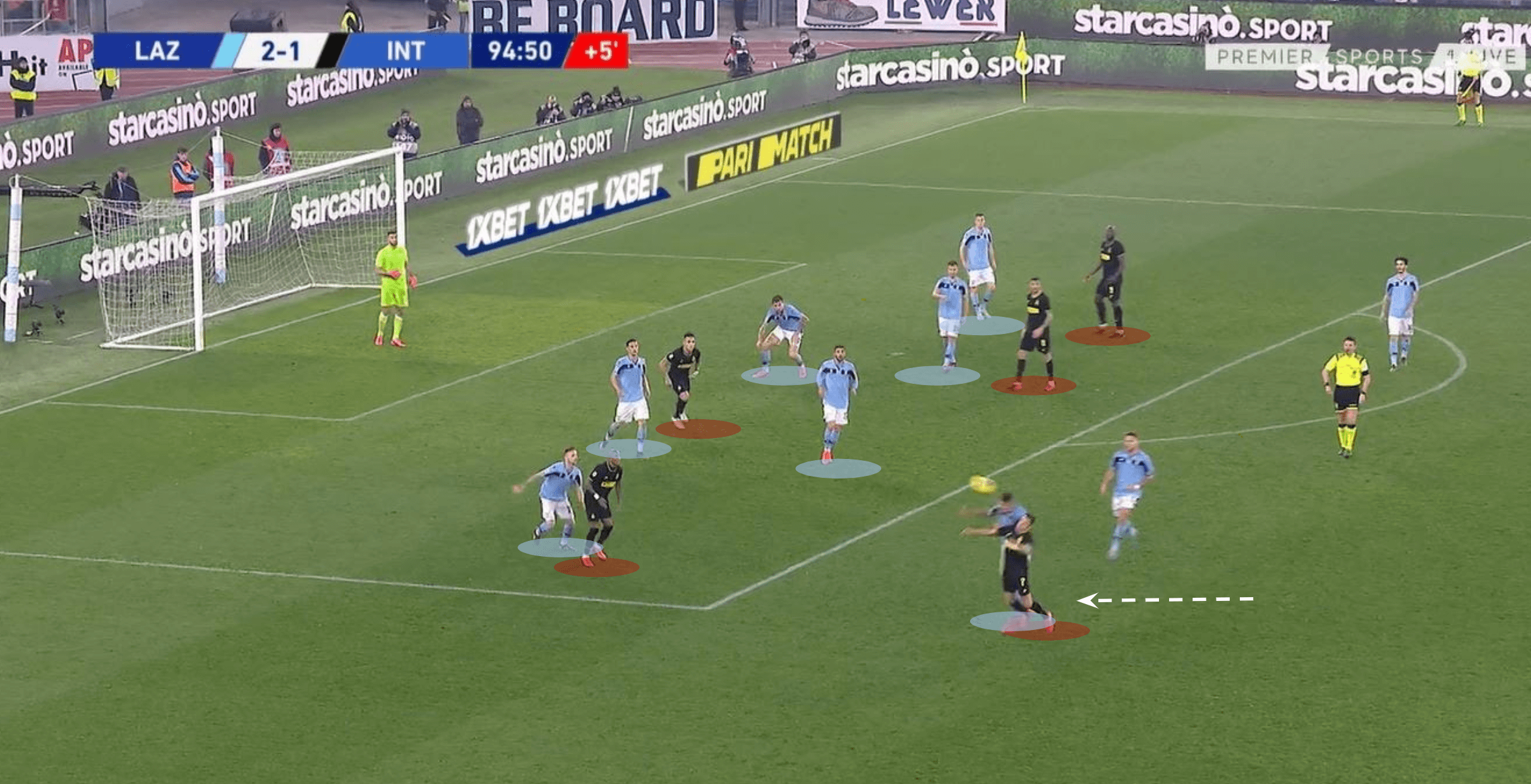 Milinkovic-Savic has been setting Serie A on fire over the last five years and has been showing every season that he is worthy of his reported lofty price tag. Ever since his arrival in Italy, the Serbian has made at least 25 league appearances in each season.

Sergej is a creative passer and is confident with the ball at his feet. Whether he is threading through balls through to the likes of Immobile or Correa, or directing his teammates like a true midfield general, it is clear to see why Europe’s elite are targeting the unique midfielder.

The relationship between Milinkovic-Savic and current side Lazio is a strong bond and there is no doubting that Simone Inzaghi is building a very special team in Rome, with Sergej being integral to the Italian’s vision.

One thing is for certain, regardless of where Sergej will be playing his football, the midfielder is approaching his prime and will no doubt continue to dominate the field between boxes for the foreseeable future.