Even though the deal is currently on hold, if the reports are to be believed, Barcelona and Atletico Madrid are negotiating an Antoine Griezmann for Saul Niguez swap. As weird as it may sound, the Frenchman might be heading back to the Wanda Metropolitano while the Catalans could add another midfielder into the fold.

But how exactly, if at all, does Saúl fit Barcelona’s tactics and what kind of a profile of a player is he? This tactical analysis will aim to answer those questions, providing you with a scout report and a thorough analysis of the 26-year-old and his suitability to the Azulgrana system.

Saúl is a 26-year-old central midfielder with a well-rounded profile and wide palette of abilities. Standing at 1.84m and weighing 75kg, he is not the most physically imposing player but one with a huge engine and incredible work rate. He likes to be deployed on the left side of the pitch, complimenting the strong preference of his left foot, but has been played all over the pitch, from across the midfield, the forward line and even at full-back.

Below you can see Saúl’s player profile through data. Note that all bar graphs show percentile rankings while per 90 minutes figures can be seen in the table below. 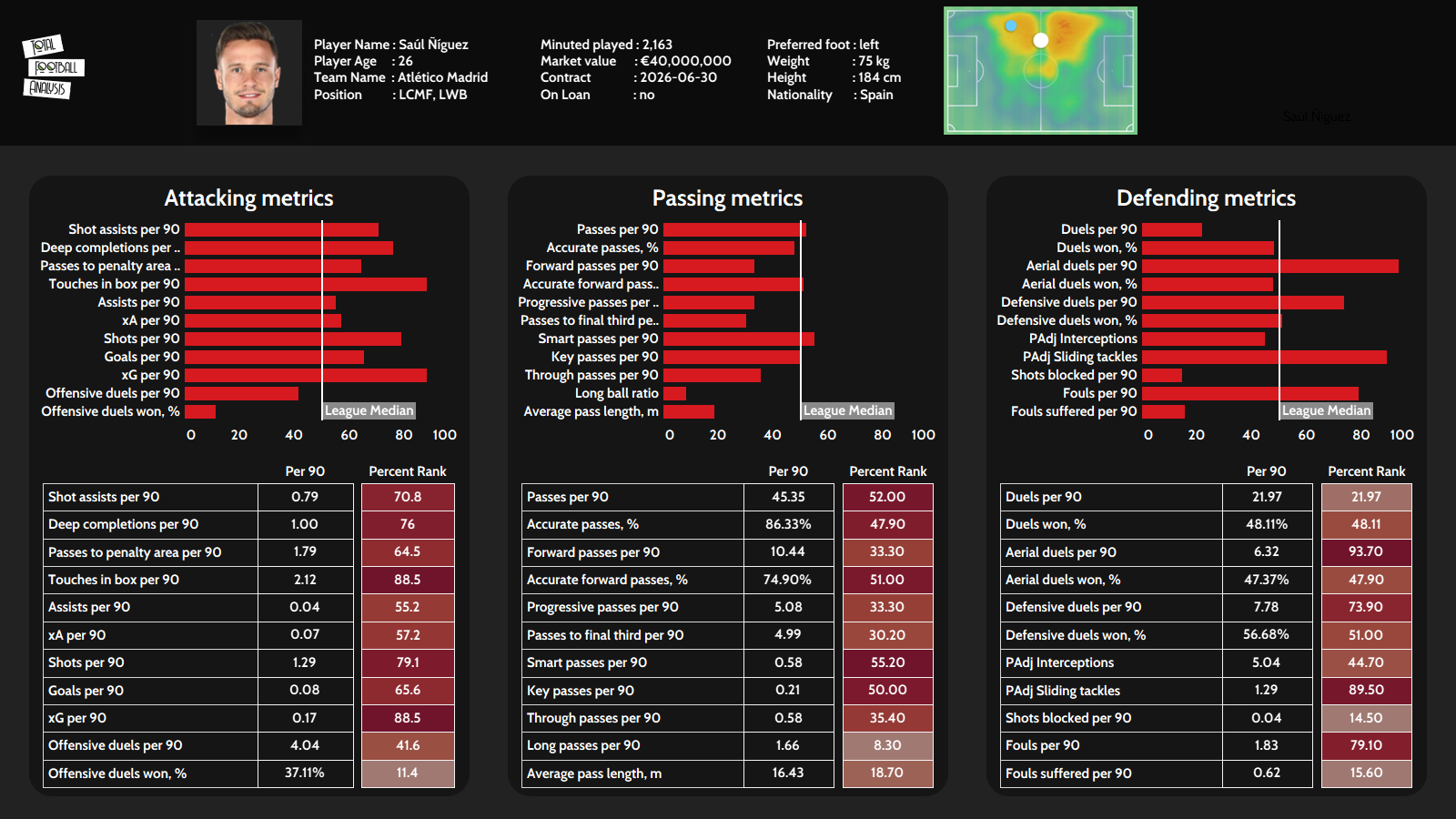 What we can gather from the data analysis is that Saúl is indeed decent at almost everything but sadly, elite in very few metrics. His attacking and defensive profiles are, however, rather impressive and do well to paint a picture of an effective box-to-box midfielder. His tendency to make off the ball runs and provide an offensive outlet in the box result in high touches in the box, shots and expected goals per 90 (xG).

Similarly, despite the recent decline in form, Saúl still tallies more shot assists, deep completions, passes to the penalty area and xA than an average La Liga midfielder. When it comes to passing, however, he ranks below or just around the league median, which is not a good look for someone who’s striving to sign for Barcelona.

But what role(s) would he occupy in their tactics? Let’s find out.

In his current form, Saúl feels like a jack of all trades but master of none type of player. He has the quality to perform a wide array of tasks but is currently unlikely to single-handedly dominate a match. His box-to-box nature is, however, something Ronald Koeman has been looking for for a while now. But looking at Barcelona’s midfield, it’s highly unlikely Saúl would get a starter role in the gala XI.

All three of Pedri, Sergio Busquets and Frenkie de Jong are nailed on starters and it would be nigh-impossible to displace them. Another issue here is the role itself. Barcelona’s midfielders have almost predetermined roles depending on their position on the pitch. 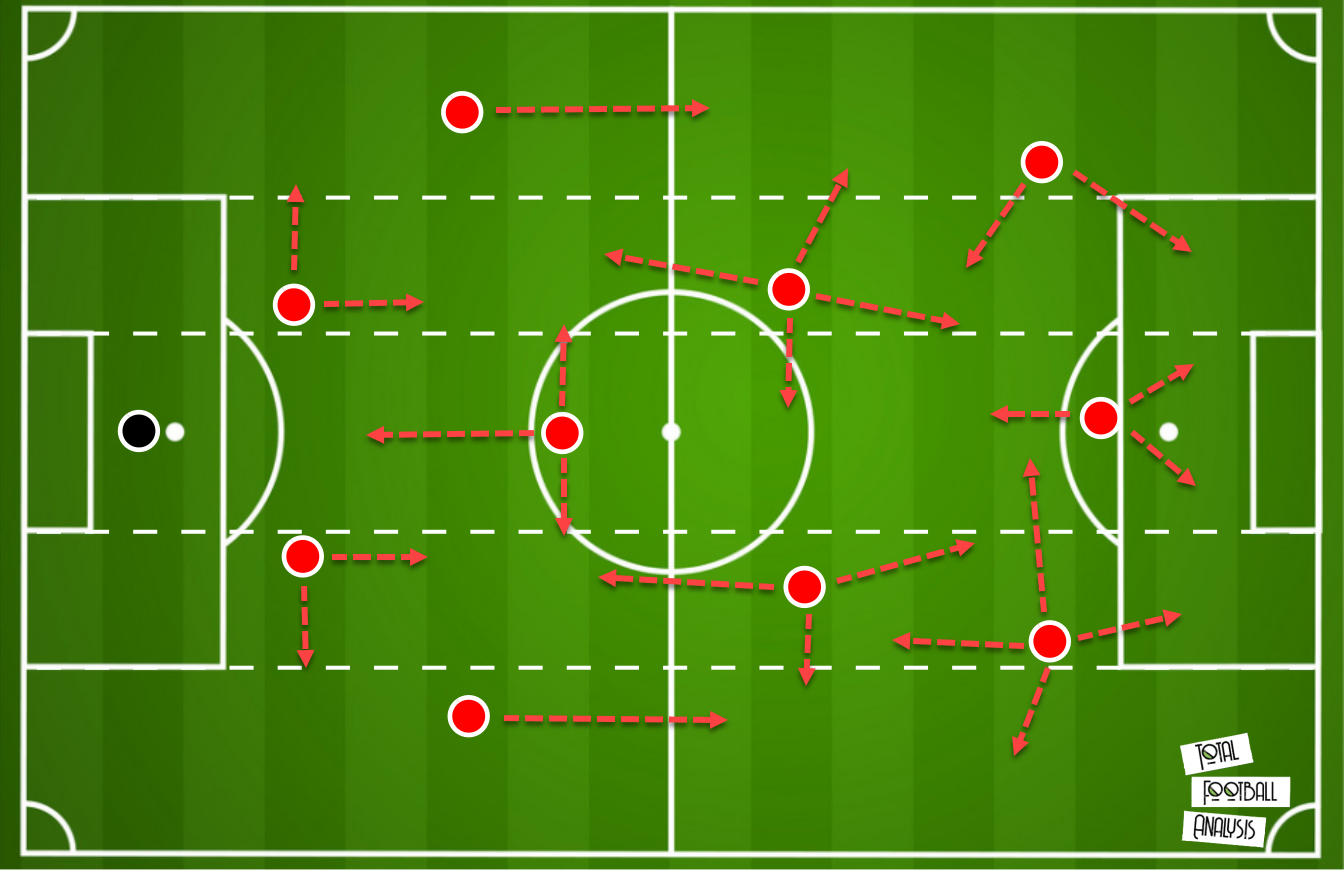 Above is a graphic showing us who does what across the team. Let’s focus on the midfield a bit more. Barcelona’s pivots are usually positioned very deep, often between the centre-backs, and act as recyclers and main progressors connecting the thirds. Saúl does have the ability to fill that role but his progressiveness is nowhere near the level of someone like Sergio Busquets.

The Rojiblanco midfielder tends to drop as deep as the backline to aid the build-up phase and does this job decently well. Below you can see an instance when that is used at Atletico Madrid. A great thing about Saúl is that he is a facilitator; his movement is largely determined by his teammates’ actions, just like Mario Hermoso’s advance up the pitch has prompted Saúl to drop, as can be seen here. 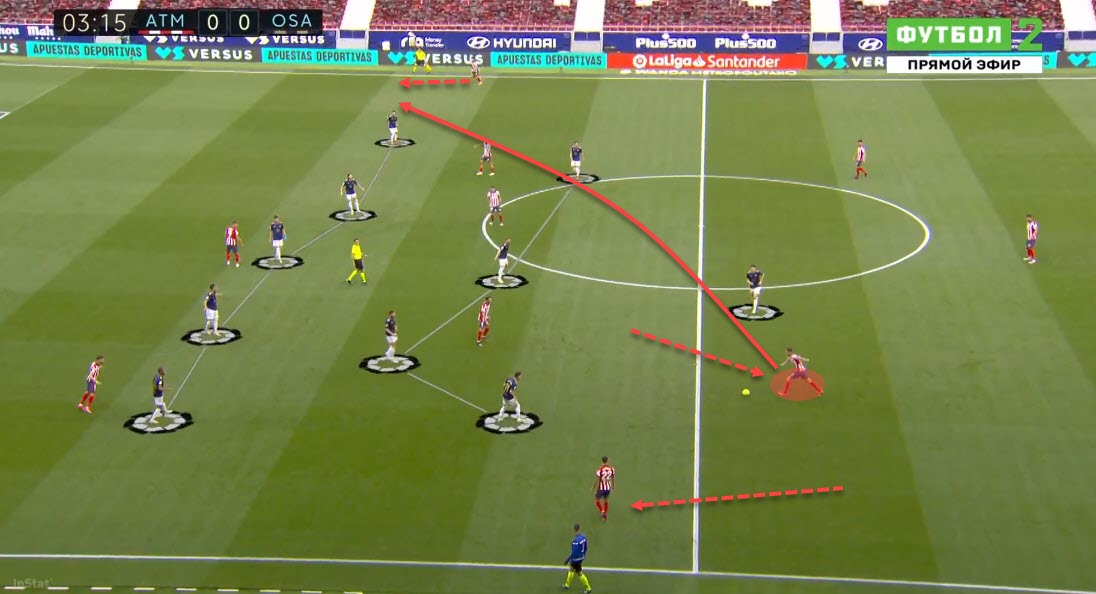 In this regard, he is very much a utility player who would be used to plug holes and support all across the pitch. Saúl also has good defensive capabilities, as we’ve alluded to earlier in this tactical analysis, so his awareness and engine could shine in a deeper role.

But looking at his progressive numbers and how he dictates play, the 26-year-old lags behind all three of Barcelona’s midfielders. His 5.05 progressive passes per 90 and 4.99 passes into the final third put him around the 30th percentile ranking in both categories, a far cry from his Azulgrana counterparts. 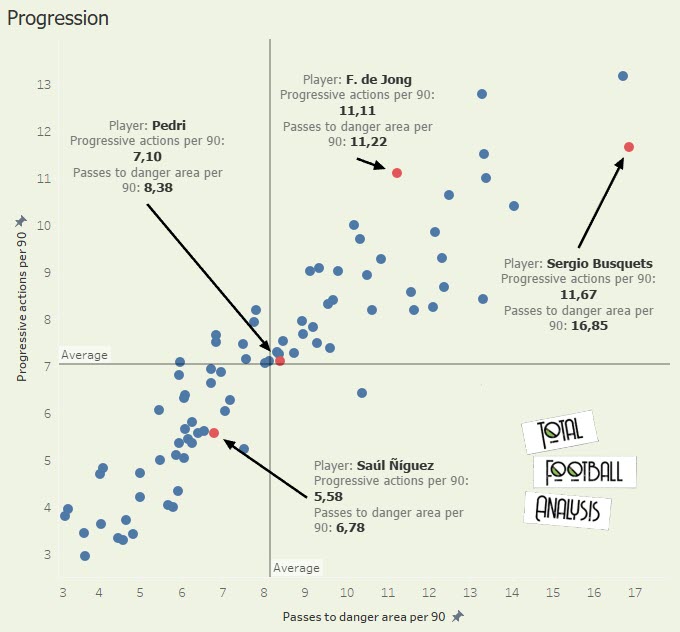 His current profile ranks below average in both metrics across all LaLiga midfielders with at least 700 minutes under their belt in 2020/21. This is also due to his role at Atletico Madrid not always being that of a deep progressor but the player’s tendencies have played a part too.

So we’ve established he has some traits that would suit a Barcelona pivot but there is no way he’s replacing Busquets at the moment. Let’s take a closer look at the no8 roles then, which are much closer to his original position anyway. 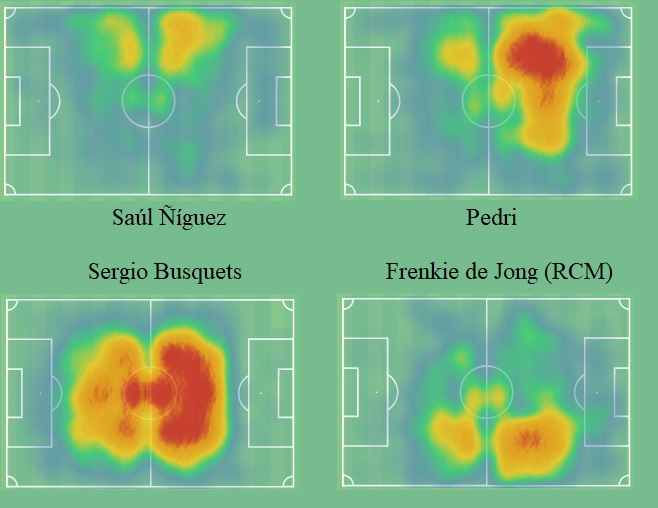 Looking at all four players’ respective heatmaps, we can immediately see that Pedri’s and Busquets’ roles are far too different from Saúl’s. The left centre-midfielder at Barcelona is drastically different to the left centre-midfielder at Atletico Madrid. Traditionally, that role at Barcelona always belonged to the most creative cog within the midfield trident and a player with the most freedom to roam the pitch.

Pedri, as a result, has a very versatile profile, often dropping deep when necessary and progressing play while also spending a large chunk of his time in the final third, especially in and around zone 14. Saúl does something similar for Atletico Madrid but none of the three midfield roles under Diego Simeone have as much freedom as Pedri has under Koeman.

Below is an image that shows us the relationships of midfielders at Atletico and we can see that Saúl will generally access the area Pedri likes to occupy too. However, this is not always the case and using the heatmap above as our guide, we see that he indeed has a much more restricted, left-side focused role.

But the left midfielder role requires a lot of creativity from whoever occupies it at Barcelona. Saúl has decent numbers with his one deep completion, 0.79 shot-assists and 0.07 expected assists (xA) per 90, enough for a 76, 70.8 and 57.2 percentile ranking respectively. This is above-average across the board but also not overly impressive for a role that would require him to be one of the main creative outlets after Lionel Messi.

Compared to the Barcelona trio once more, this time assessing their creativity, Saúl falls behind in a very similar manner as he did for the progression metrics. This time, we’ve used deep completions and key passes per 90 along with xA per 90, which is depicted by the size of the dots. 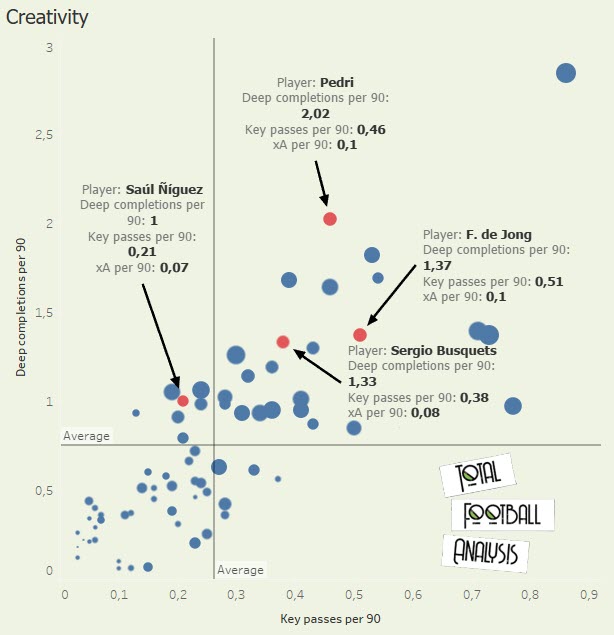 A note that a deep completion is a non-cross pass that is targeted to the zone within 20 metres of the opponent’s goal, according to Wyscout. Saúl’s one deep completion per 90 is enough for an above-average result but 0.21 key passes per 90 sadly are not. Similarly, all three of Barcelona’s midfielders are far more creative and outperform the Rojiblanco in every category that’s measured here.

What we have to keep in mind is that Saúl’s role in Atletico’s 3-5-2 has limited his freedom and the extent of his involvement in the final third. He likes to burst forward and make runs into the box and generally into the final third, as can be seen from high xG, touches in the box and shots per 90 figures. This indicates there is a true box-to-box nature to his profile that has been somewhat restrained of late.

But his on the ball ability means he’s unlikely to be a good fit for the left side of the pitch at Barcelona. Instead, the right-midfielder role, in the mould of Ivan Rakitić, Arturo Vidal or even now Frenkie de Jong, is more to his liking. The right side is more suited to a box-to-box presence; a player with an engine to cover for his teammates and contribute on both ends.

Above we can see how Saúl does all of that in a single sequence. He is dropping deeper to open a passing channel for his teammate but if that’s not taken, he can immediately burst forward through the half-space and offer a running option or just a decoy to drag the markers away.

This is very reminiscent of De Jong’s role, which is confirmed by the heatmap as well. I’ve opted to include the Dutchman’s games as the RCM only, so that we get a better sense of what he does on each side specifically as opposed to getting his heatmap that essentially covers the whole pitch.

When deployed in such a role, Saúl would have the freedom to use the full extent of his kit while also providing the necessary support for his teammates. When the full-backs bombard forward, he can and will drift wide for cover. Similarly, if the opportunity arises, he can be the one keeping the width in the absence of an overlapping full-back or a natural winger. 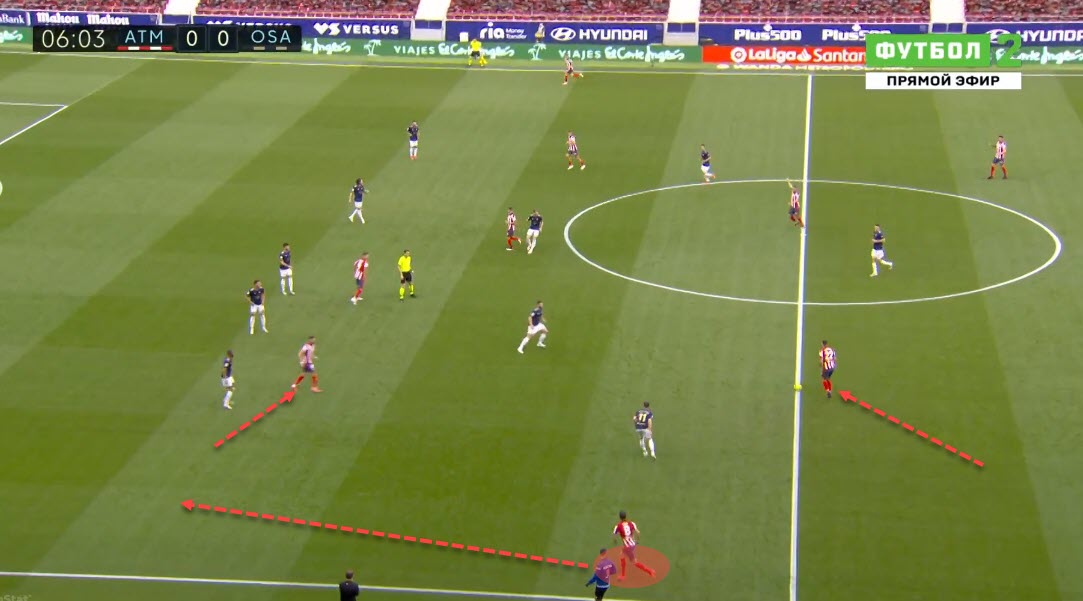 All of this points towards a very suitable role on the right side of the pitch. The only problem is, once again he’s not good enough to bench De Jong. Our final two comparisons deal with attacking and defensive outputs respectively and Saúl, while impressing in some metrics, still lags behind the Barcelona trio.

He matches De Jong in touches in the box and records more shots and a higher xG so that’s definitely something unique he’d offer. But as a whole, it may not be enough for a starting position in the team. 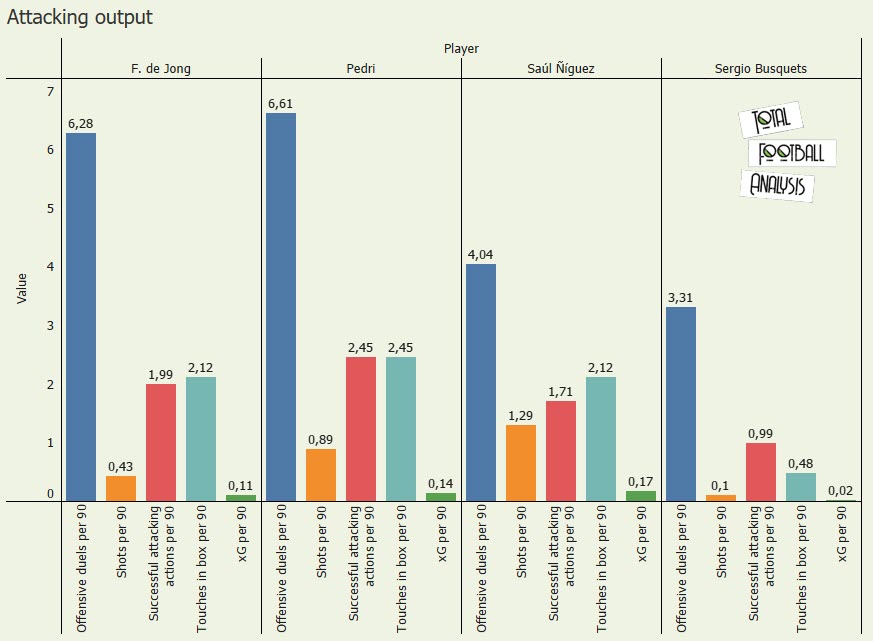 Defensively, however, we can see that he outperforms Pedri and De Jong almost across the board. Pedri tallies more PAdj interceptions (possession-adjusted) but overall, Saúl is a far more defensively well-rounded player than both of them. Busquets is still edging him out in certain metrics but that is also due to the role he plays within Barcelona’s tactics. 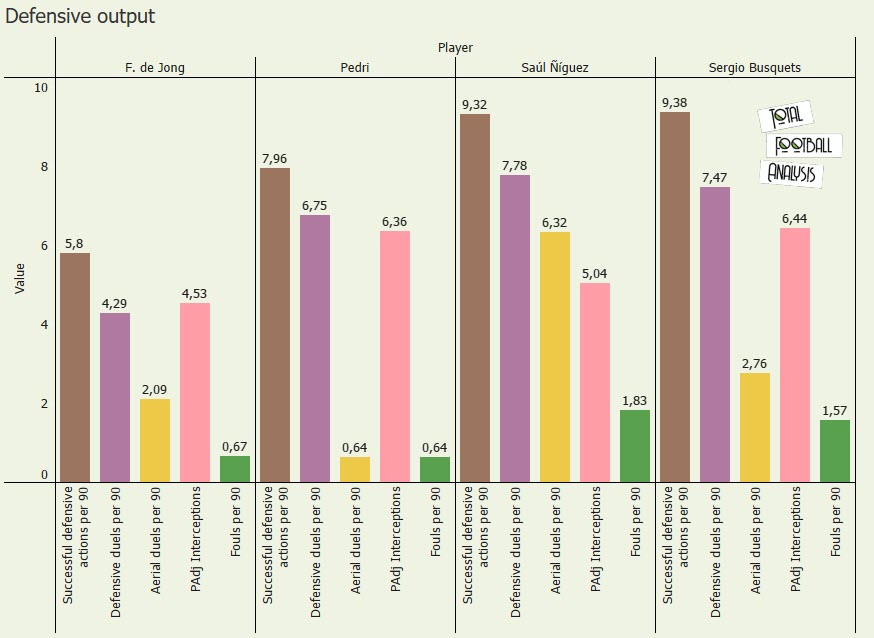 All of that leads us to believe Saúl is something between a De Jong and a Busquets; a true box-to-box profile that can perform both roles well but is not good enough to bench either of the players. Pedri’s role is out of his reach too so that means he’d be a good backup option for the right and deeper roles.

Of course, there is always a possibility of deploying a system with all four of them at the same time but at the moment, that seems unlikely.

Saúl is a quality player in his prime but the current form he finds himself in is not overly impressive. While you could argue that he can fill almost every midfield role and broader, his output is simply around average or just above it.

If he does sign for Barcelona, Koeman will get a hard-working player eager to prove himself but also one that is likely to be used only as a rotational figure in the squad.