With Colombia still going strong at this year’s Copa América, it doesn’t surprise to see some of their players impress the most so far. One such player is Zenit’s Wilmar Barrios, a 27-year-old defensive midfielder currently dominating the tournament and turning heads.

Compared to Tottenham Hotspur’s Pierre-Emile Højbjerg, Manchester United’s Fred and Arsenal’s Thomas Partey, Barrios is a player who could soon be making a move to some of Europe’s best.

This tactical analysis will dissect his player profile in the form of a scout report, give you the tactics he thrives in and use analysis to uncover some potential weaknesses as well.

Barrios is a 178 cm tall, right-footed defensive midfielder, weighing 74 kg and currently playing for Zenit in the Russian Premier League. He is also a Colombia international and a big part of their squad. The 27-year-old predominantly plays in the no.6 role and enjoys incredible defensive awareness, pace and decent strength for his stature.

Below is a graph that will give us a closer look at his main strengths and weaknesses. Note that all categories are compared to other midfielders in the league and shown in percentiles where the higher the percentile, the better the player’s performance. 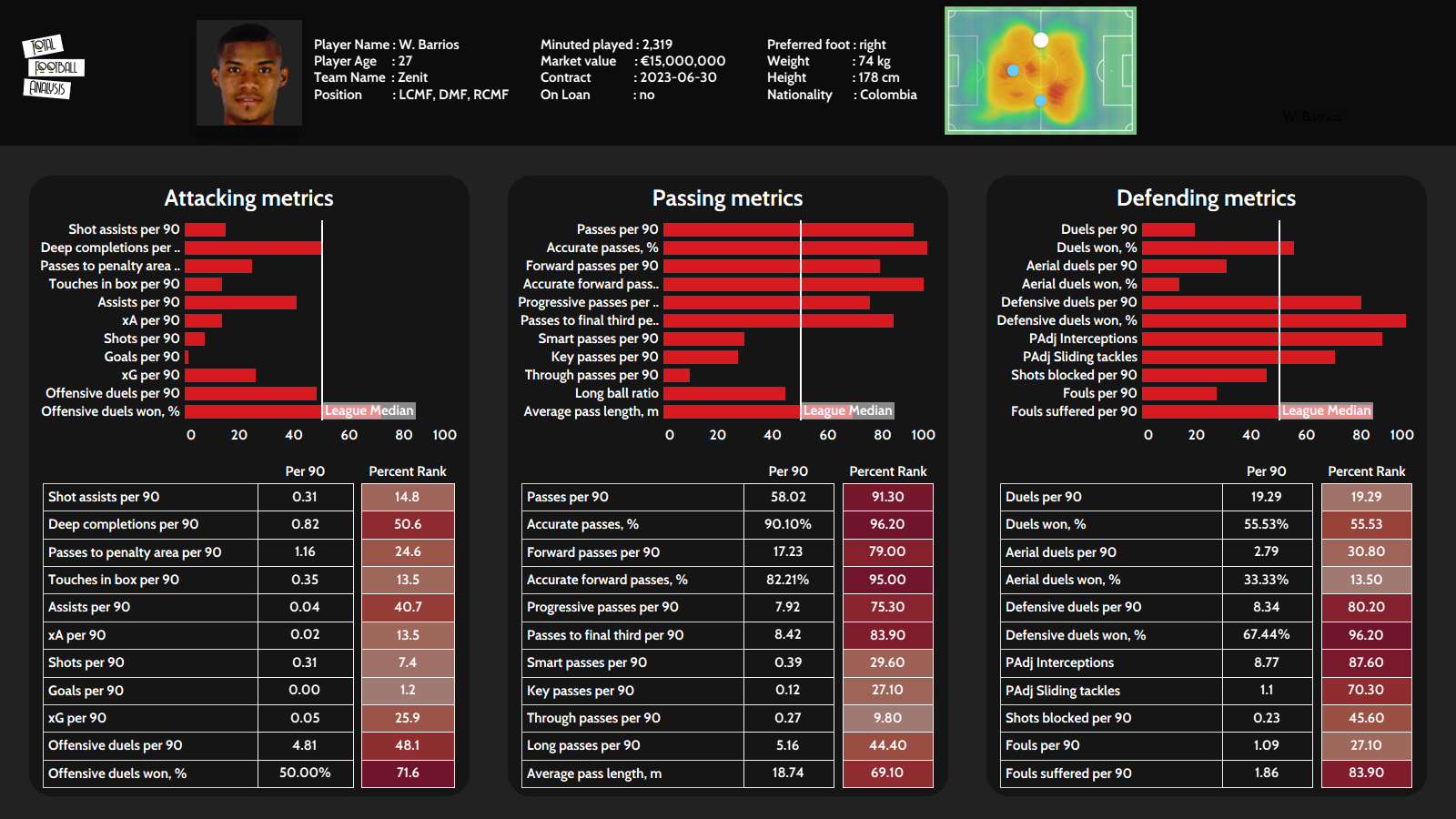 Immediately, we can see Barrios is a progressor and a destroyer in one, excelling on the ball and defensively while offering limited offensive output. While he can win offensive duels and largely does so when engaging in them, he will rarely attempt to shoot or find himself in the danger area to register overly impressive expected goals (xG) values.

When it comes to passing and progression, we see he’s highly involved in the build-up phase, finding ways to deploy forward passes and advance play up the pitch, often through long balls. Barrios is, however, not the most creative but can, on occasion, thread a through ball or a key pass.

Defensively, while weaker in the air, partly due to his height, his reading of the game is excellent. Barrios is very fast too so he can correct his mistakes and will win defensive duels often. Even more importantly, he’s good at stopping attacks without committing fouls often.

The tactical analysis will now dissect some of his most prominent traits in more detail.

At first, Barrios struck me as a regular destroyer – tough and clean defensively despite his decent but not overly impressive stature. But what surprised me the most is his technical quality both on and off the ball. The 27-year-old is an excellent pivot due to his defensive ability, absolutely, but also because of his press-resistance and most importantly – scanning.

A good player is always aware of his surroundings and while scanning is very difficult to quantify, its effect is clearly visible through the eye-test. Barrios is a player who always scans for the opposition’s positioning and this, to me, is one of his greatest strengths, both offensively and defensively. 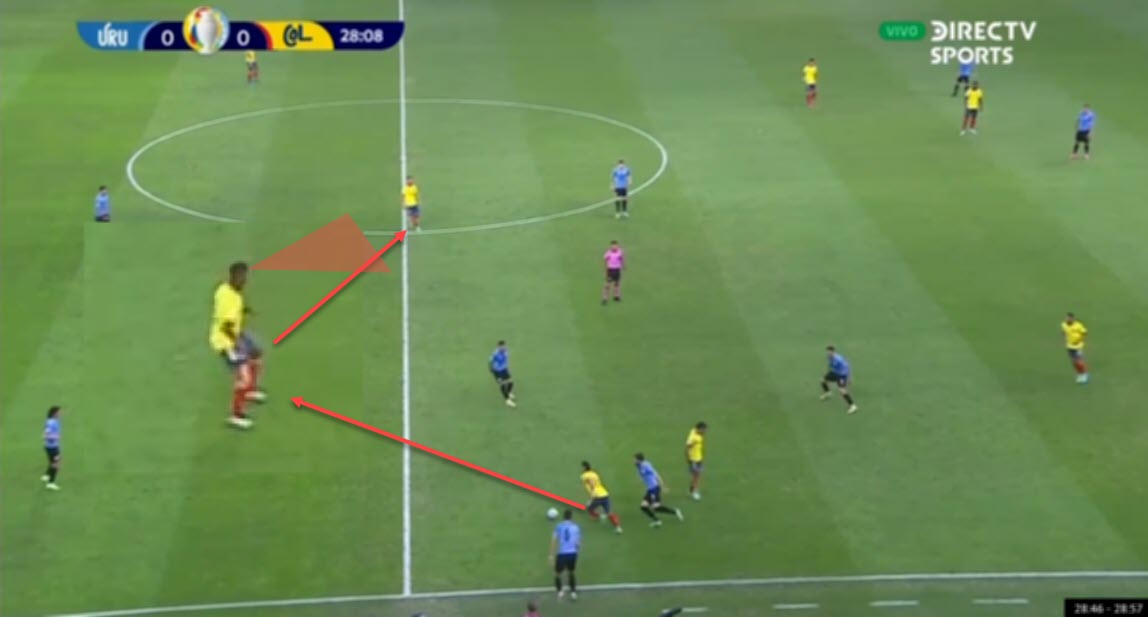 As a result, the moment the ball reaches him he can send it along and in three touches, Colombia have successfully bypassed the collapse. Needless to say, this can also be a defensive tool. In our next example, Barrios uses scanning to reposition himself and close a passing channel for the Uruguayan attack.

After scanning his surroundings and noticing the runner behind him, he moves in such a way to keep him in the cover shadow while also maintaining a short distance to the player in front in case the ball goes there instead. And this allows him to intercept the pass before it reaches the danger area. 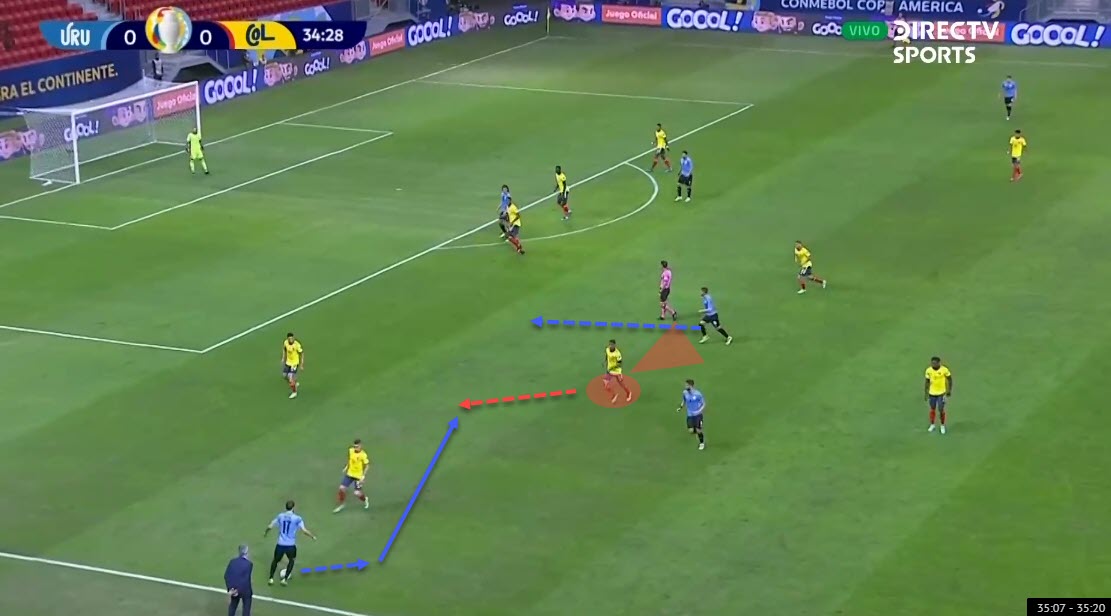 But scanning is mostly used offensively and in the build-up phase. Barrios uses it to make sure he’s got enough time and space to receive the ball and then deploy deadly passes into the final third. It has to be noted this is not always the case – he’s more of a recycler and ball-retainer but has it in his locker to be more creative as well.

0.39 smart passes, 0.12 key passes and 0.27 through passes per 90 in 2020/21 are sadly not that impressive as neither eclipses the 30th percentile ranking in the Russian Premier League. But Copa América has shown us this side of Barrios as well.

The following example depicts the 27-year-old receiving around the halfway line of the pitch after scanning multiple times to ensure no one is close. Following that, he takes a couple of touches to reposition himself and then deploys a piercing through ball to a dropping teammate down the central channel. 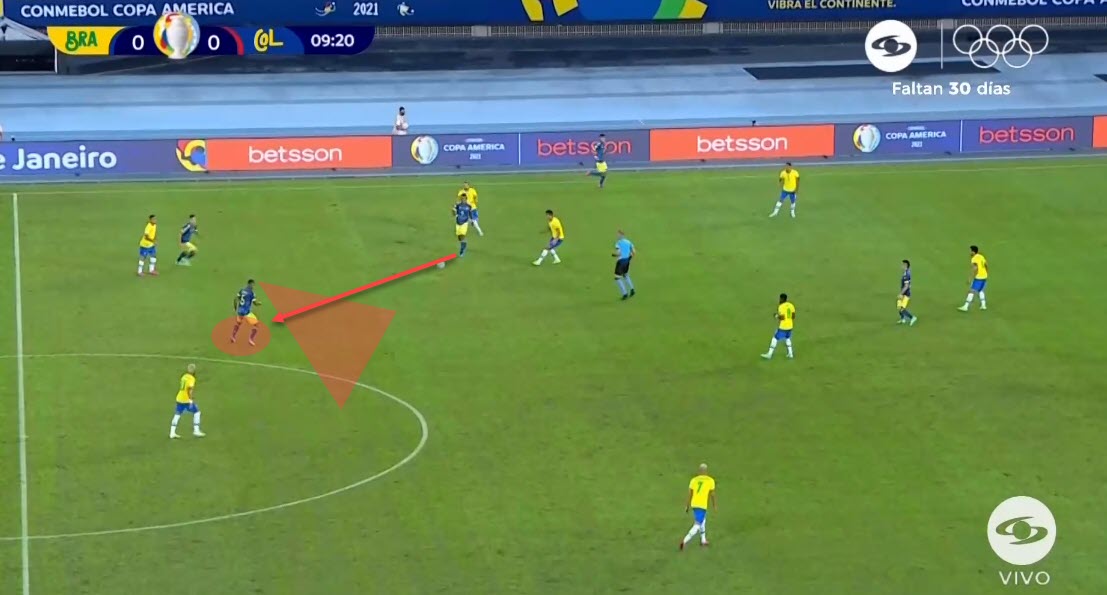 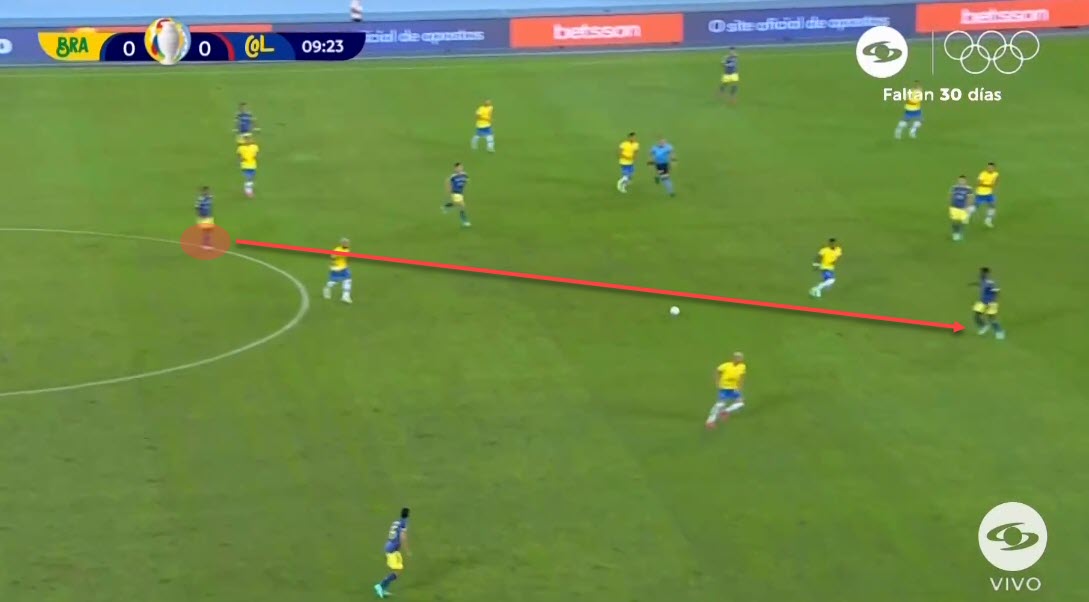 After touching on it shortly in the first section of our tactical analysis, it feels right to look at Barrios’ passing in more detail again. We’ve established he’s not the most creative but his progression is still impressive. With his 58.02 passes per 90, he’s in the top 10% of midfielders in the Russian Premier League when it comes to sheer volume, signalling he’s heavily involved in the build-up.

Similarly, 17.23 forward passes and 7.92 progressive passes per 90 put him around the 80th percentile ranking, further solidifying his role in his team’s tactics. Usually, he’ll drop outside of the opposition’s defensive block and position himself in front of his backline. Creating a triangle with the centre-backs is a good way of ensuring numerical superiority and offers good passing channels for progression.

After receiving from the backline, Barrios is more inclined to deploy short progressive passes or go long by switching sides, as can be seen from our next example. Here, the 27-year-old shows us his vision by picking out a free teammate on the opposite side of the pitch, sending a pinpoint lofted pass over the defensive block. 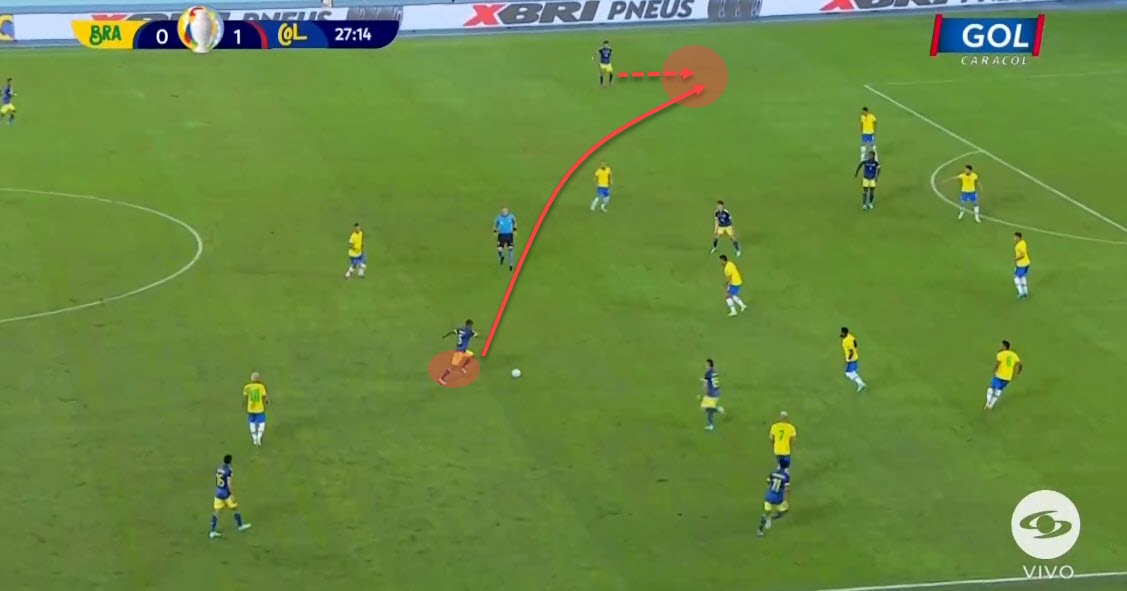 And it’s this vision he possesses that is a subtle hint of his more creative side, which is definitely present. Of course, his positional awareness is key in these examples as he always knows where both his teammates and opponents are.

The example down below shows us this perfectly. Colombia do great work to invite Uruguay’s collapse, which frees up the flank for an overlap. Barrios has the vision to see the play happening immediately and sends an excellent long pass into space on the right. 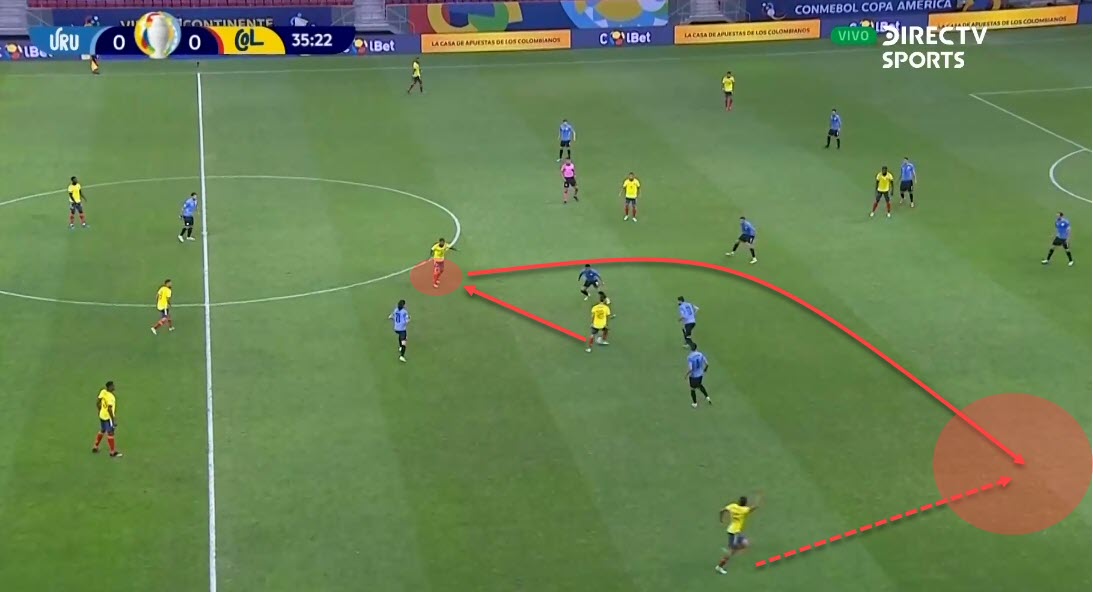 But this is also the thing with Barrios – he’s a great progressor but largely does so through his passing rather than running with the ball, even when he has a clear option to do so. Let’s explore a couple of examples where this was most evident. Against Peru, for instance, the 27-year-old kept receiving in front of his defence and then despite having clear progression channels for a run, he would opt for a short passing option.

It has to be said that this is the nature of his more defensive role in Colombia’s tactics – a defensive no.6 with more creative no.8s. In the example below, Barrios receives from his defender and instead of repositioning himself with a short run, he takes far too many touches and then decides to attempt a very difficult through ball which doesn’t find the mark. 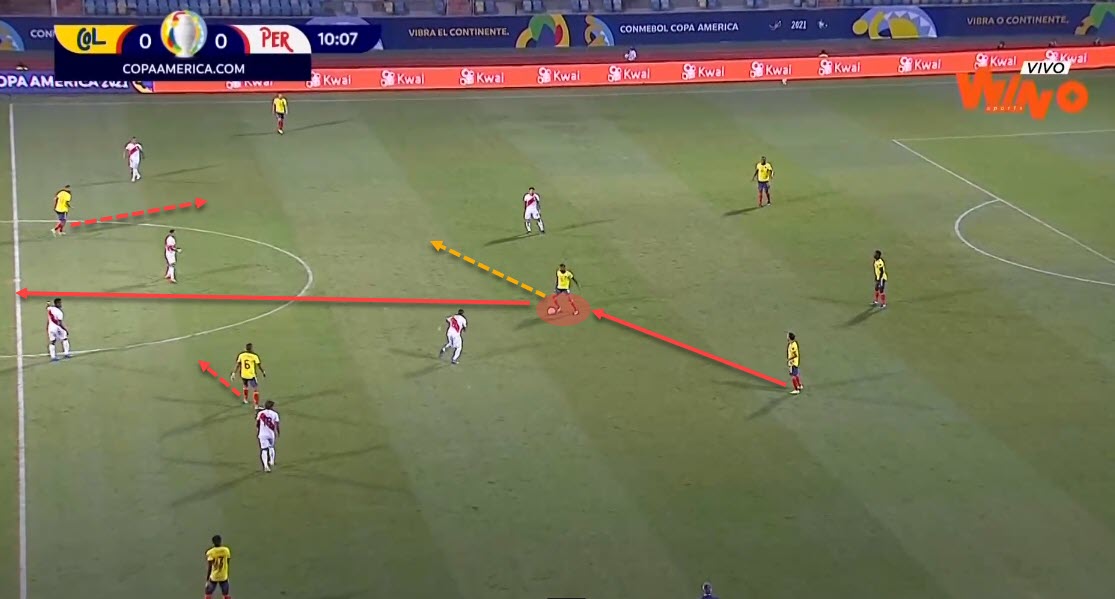 And this seems to be a slight flaw in his player profile. Barrios often takes one or two touches too many before deploying his next pass. This is acceptable when the tempo needs to be slowed down but for a fast-paced build-up, he would need to be more comfortable with one-touch passes. Similarly, it seems his first touch can be somewhat lacking in certain situations.

While generally, he doesn’t struggle with it, there are instances when his miscontrol puts him in a much worse position than what would initially have been the case. Below is another example of his reluctance to run with the ball to progress play.

Again, he receives deep and has acres of space to run into but he opts for a short pass and leaves the progression to his teammate. Note that the yellow arrows represent the option that could’ve been taken. 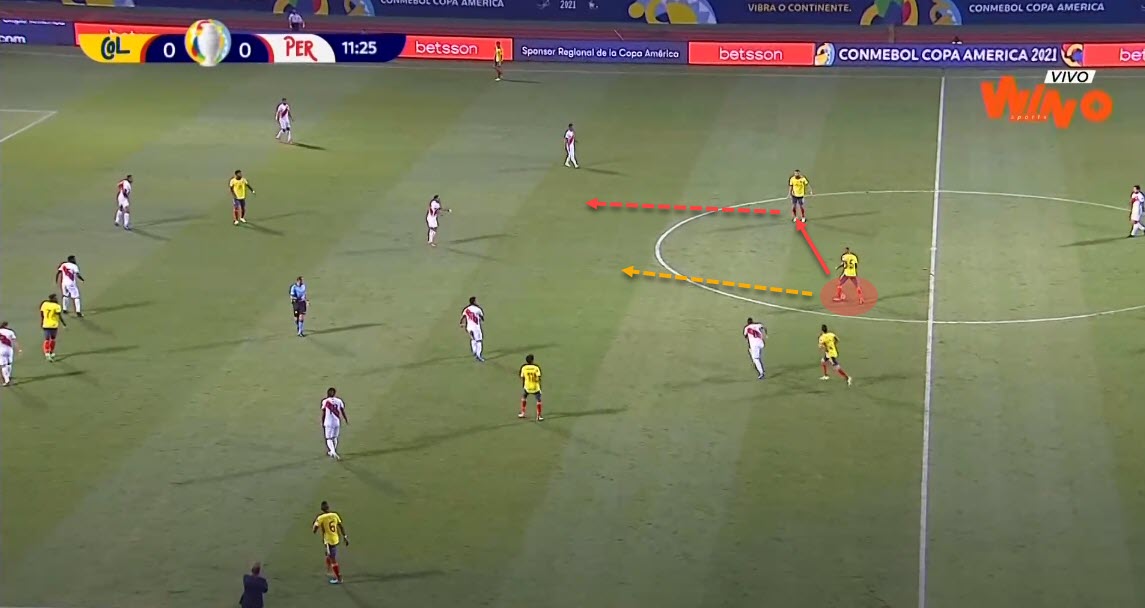 Finally, we should really touch upon Barrios’ defensive abilities, which is what people notice most about him. And it doesn’t come as a surprise. In 2020/21, he tallied incredible stats in most defensive categories – in efficiency in defensive duels, his 67.44% success rate puts him in the top 4% while he’s equally impressive in PAdj (possession-adjusted) interceptions and defensive duels per 90 (87.6% and 80.2% respectively).

Another very important aspect of his defending is the fact he wins challenges without fouling too often, registering only 1.09 per 90 minutes. We’ve already seen how his defensive scanning helps him be aware of the opponents’ positioning while also ensuring he’s in the right place at the right time.

Below is another example that shows a very similar thing. Barrios is positioned perfectly to both close the half-space channel towards a target in a dangerous area and to still be close enough in case Peru go for a short option more centrally. 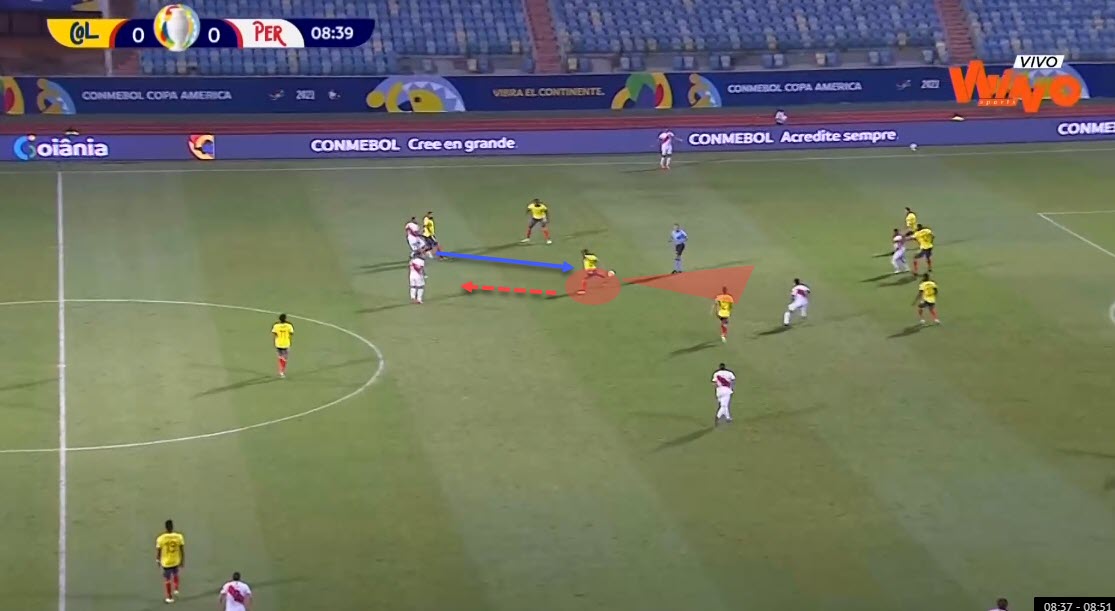 He ends up intercepting the pass successfully, which is often the case due to his positional awareness. We’ve also shortly touched upon his physique. Barrios is not the most physically imposing defender but he uses his body well to shield the ball and when you add more than decent pace to the equation, you get a defender you’ll struggle to beat in a duel.

Below is an example of Barrios tracking back with speed to snatch the ball away from a sprinting opponent without committing a foul in the process too. This, too, is not an isolated case with the Zenit midfielder.

He can shrug attackers off the ball and recover possession even in risky areas of the pitch. 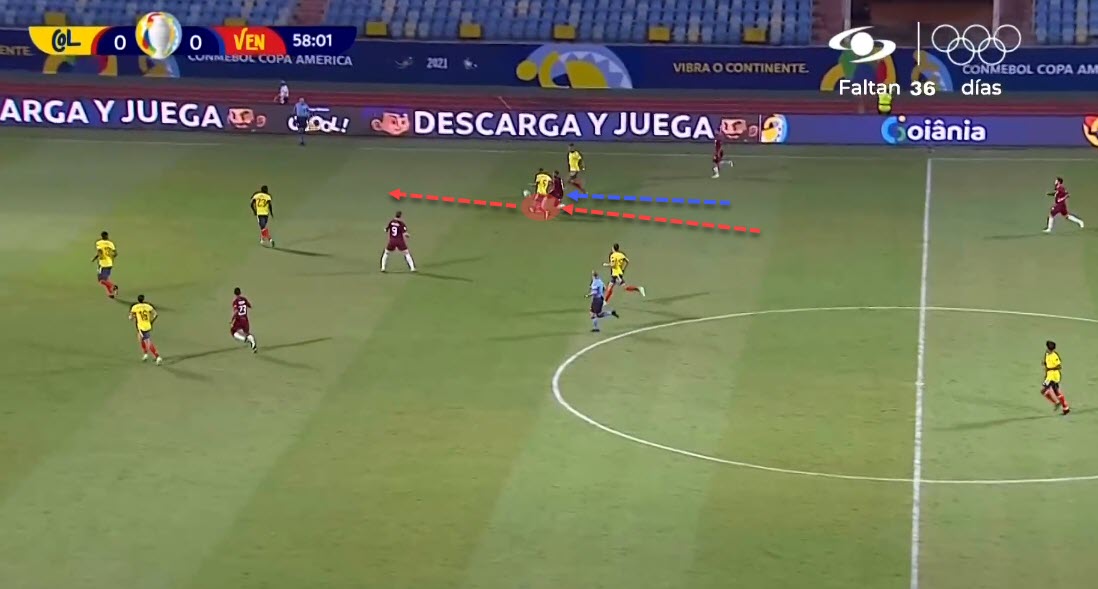 Interestingly, Barrios seems to have a certain style when it comes to tackling. Usually, he’ll open his body and spread his legs to get the ball and close the opponent’s path on both sides. While it can be risky against players who can win fouls often, it has proven an excellent technique so far.

So much so that he’s dominated the likes of Paris Saint-Germain’s Neymar in direct confrontations recently, completely pocketing the Brazilian on a couple of occasions. Below is an example of such a scenario and you can see Barrios’ technique clearly. 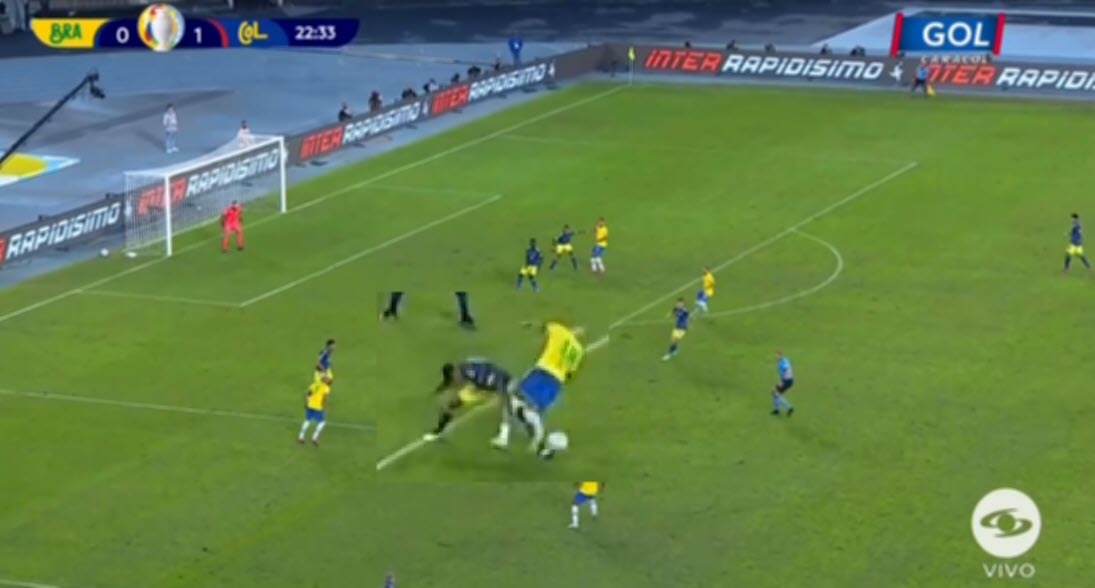 That being said, it does seem the Zenit star can be a bit too aggressive in his approach at times, rushing into a challenge and often going to ground with sliding tackles. Generally, this hasn’t hurt his defensive solidity too much but there were times where he was easily eliminated due to a reckless charge.

Another deficiency in his profile are aerial duels, which he struggles to win largely due to his height.

Following his incredible Copa América campaign – which is yet to finish – Barrios will surely be in high demand. And seeing his quality, it wouldn’t be a stretch to say he could be a huge reinforcement for a big club in the near future.