Until recently, Lionel Messi’s career with Argentina’s national team was characterised by failure and disappointment. For years, the Barcelona legend struggled without the rise of any promising players coming out of the South American country. The tides have turned, however, and as seen by their recent Copa América success, there are countless Argentinian stars emerging throughout world football. More specifically, the generation of players born from 2000-2005 may turn out to be a golden one for Argentina.

While stars like Man City’s Julián Álvarez and Benfica’s Enzo Fernández are already performing for UEFA Champions League clubs, there are a few promising players on the verge of breaking out of Argentinian football. One of the most consistent of them is 20-year-old Santiago Hezze from Huracán. The kid from Buenos Aires is a product of Huracán’s youth system, having made his professional debut in early 2020. After establishing himself in the senior team, he is now a key piece of Diego Dabove’s side, who are currently third in the Liga Professional.

In the form of tactical analysis, this scout report will examine Santiago Hezze’s playing style, identifying why the defensive midfielder is such a promising player. Specifically, this analysis will look at the 20-year-old’s characteristics, tendencies, and strengths.

Santiago Hezze is rather versatile as far as positioning in the midfield. The 20-year-old is certainly more defensive, although he is also able to play an important role in possession. Dabove’s tactics have been built around a 4-2-3-1, with a 4-3-3 occasionally being used. In the 4-2-3-1, Hezze has the more defensive role in the double pivot. However, he was also used as a number eight in the 4-3-3.

Nonetheless, given his abilities and characteristics, Santiago can perform either as part of a double pivot or as the single pivot himself. As seen in his heatmap, he has mostly performed on the right side of the pitch throughout his career. 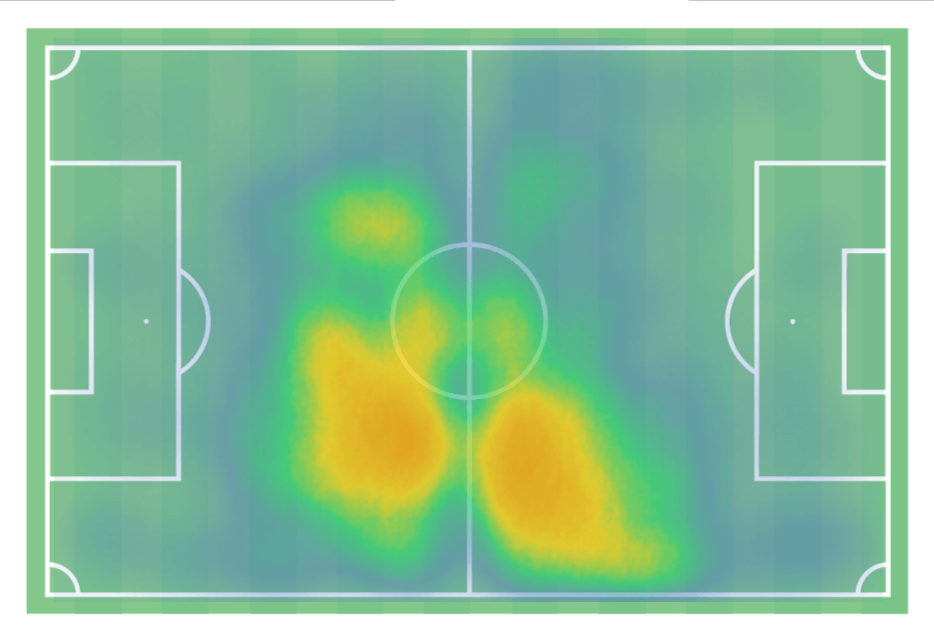 His actions map further highlights his involvement throughout the pitch. Though he is initially deployed on the right, he is active everywhere in the middle of the pitch. This mobility and presence are quite significant, especially in such an important role. 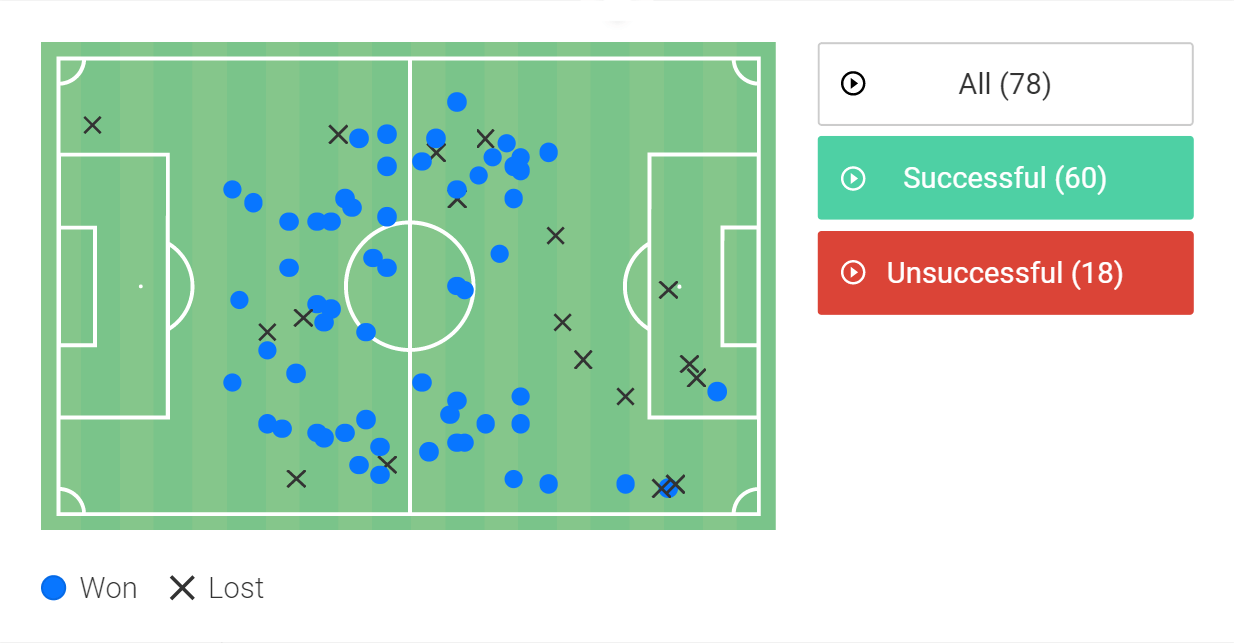 Santiago Hezze’s most notable strength is his defensive presence. Sitting ahead of the backline, he offers tremendous protection and intensity. When pressing in a high block, he is also able to provide cover and close players down. Statistically, his performance is quite impressive. In 2022, with 24 matches played, the 20-year-old averages 12.15 successful defensive actions per 90. Hezze is very active on the defensive end, and a significant part of that comes from his ability to read the game.

Regardless of the scenario, he is constantly able to anticipate plays and successfully recover the ball. At 5.71 interceptions per 90, he has been quite consistent despite the young age. In a recent match, the Argentinian had 12 interceptions in a single match, being able to retain the ball in all of those instances. 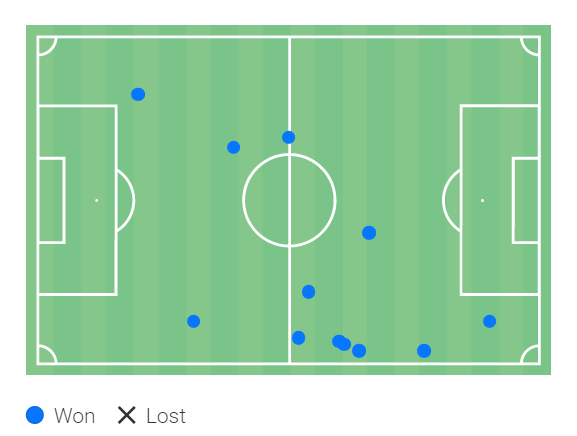 In lower blocks, Hezze demonstrates an impressive awareness of the defensive organisation. With intelligent positioning and great physical abilities, he is constantly able to cover spaces and intercept dangerous passes. In the example below, when the ball is played to the centre-forward in the box, he is able to quickly step in the lane and recover it. 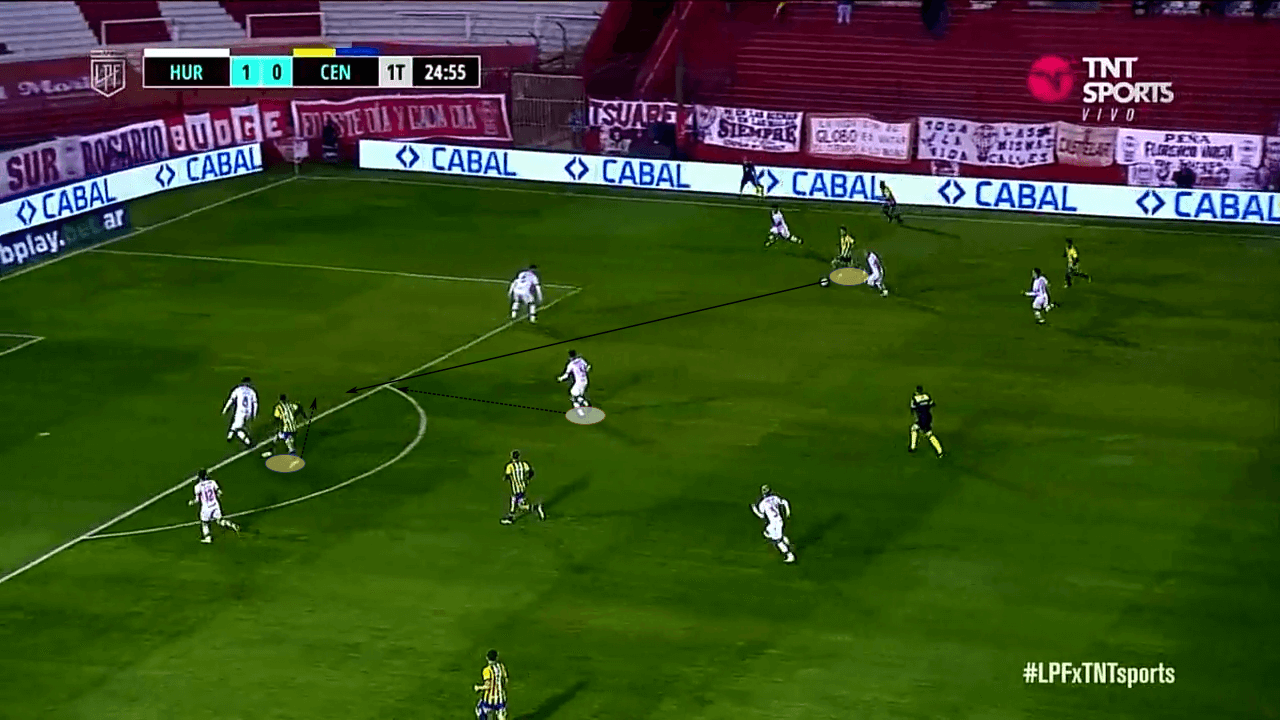 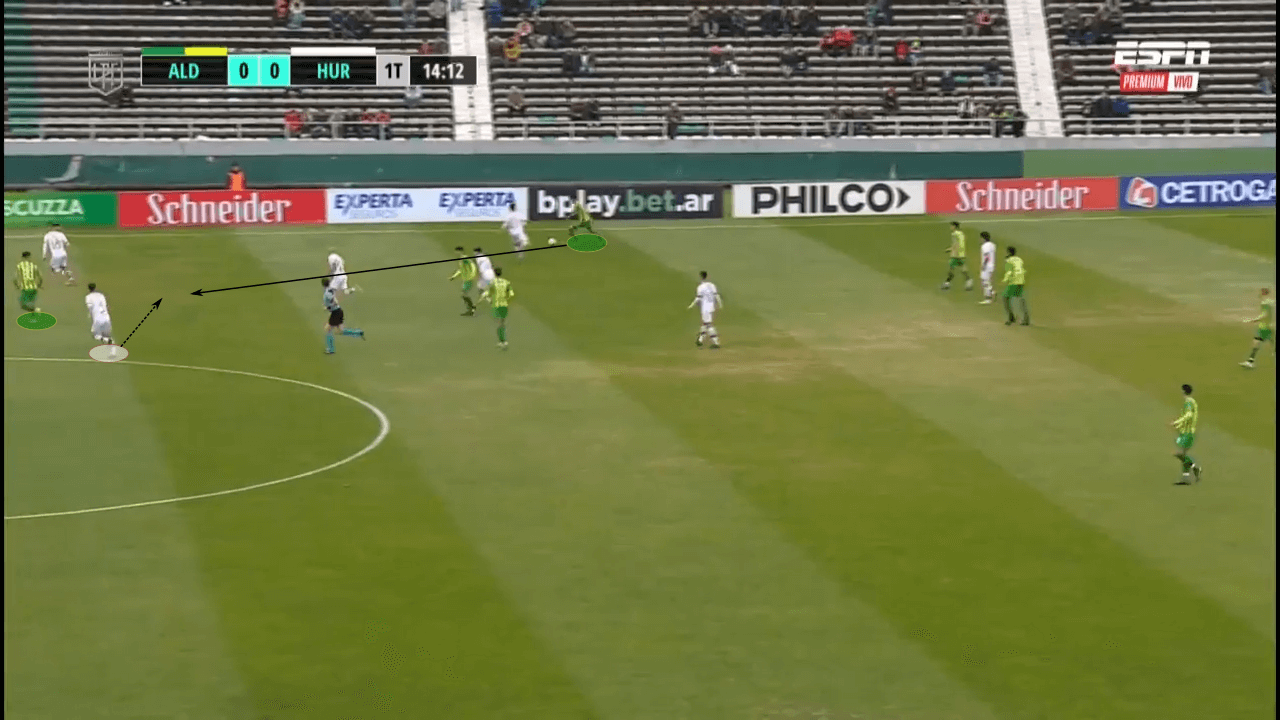 Another example can be found below. As the opposition aims to play a direct pass into the midfield, Hezze immediately anticipates the pass, recovers the ball, and begins an offensive transition. His quick acceleration and strength allow him to not only get to the ball before the opponent but also win the 50/50 challenges. 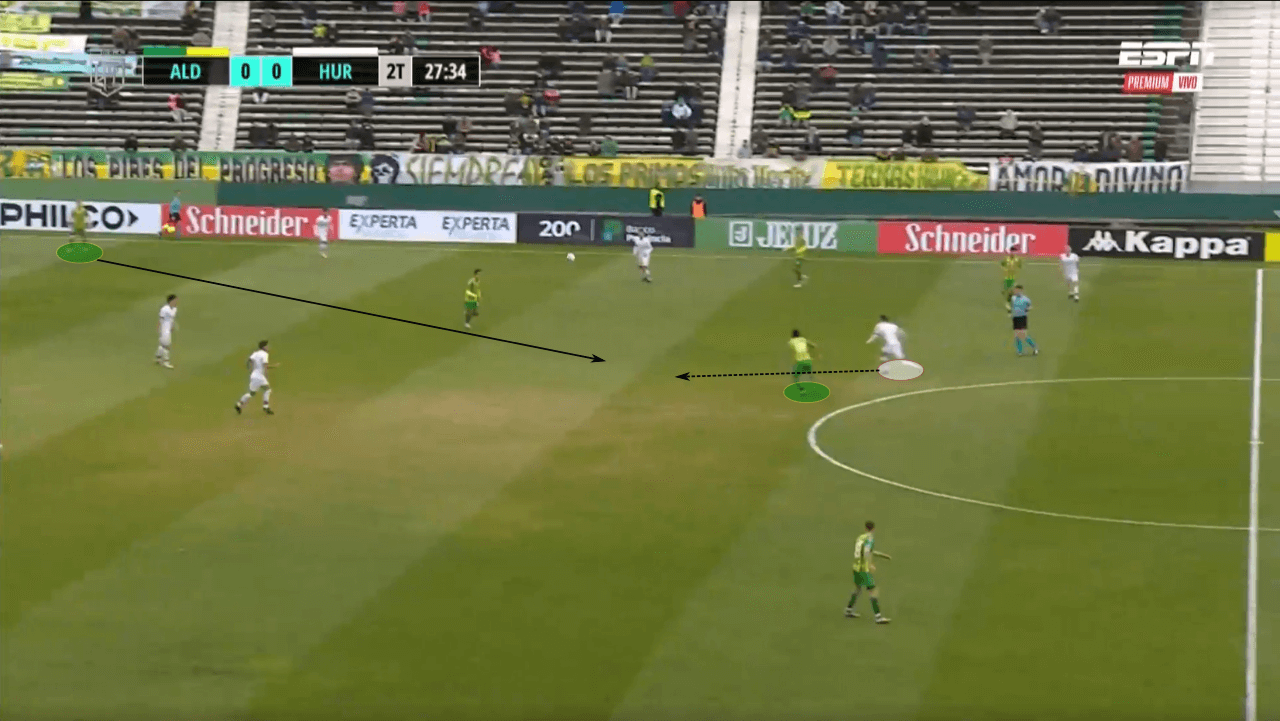 As seen through his positioning, Santiago is quite mobile. He is able to cover a lot of ground, especially due to his aggressiveness. He is able to press the opponents in a relentless manner, not allowing them time or space on the ball. In the example below, rather than sitting deep ahead of the backline, he steps up to close the opponents down in the midfield. When the ball carrier plays it to the middle, he intercepts and again launches a dangerous transition. 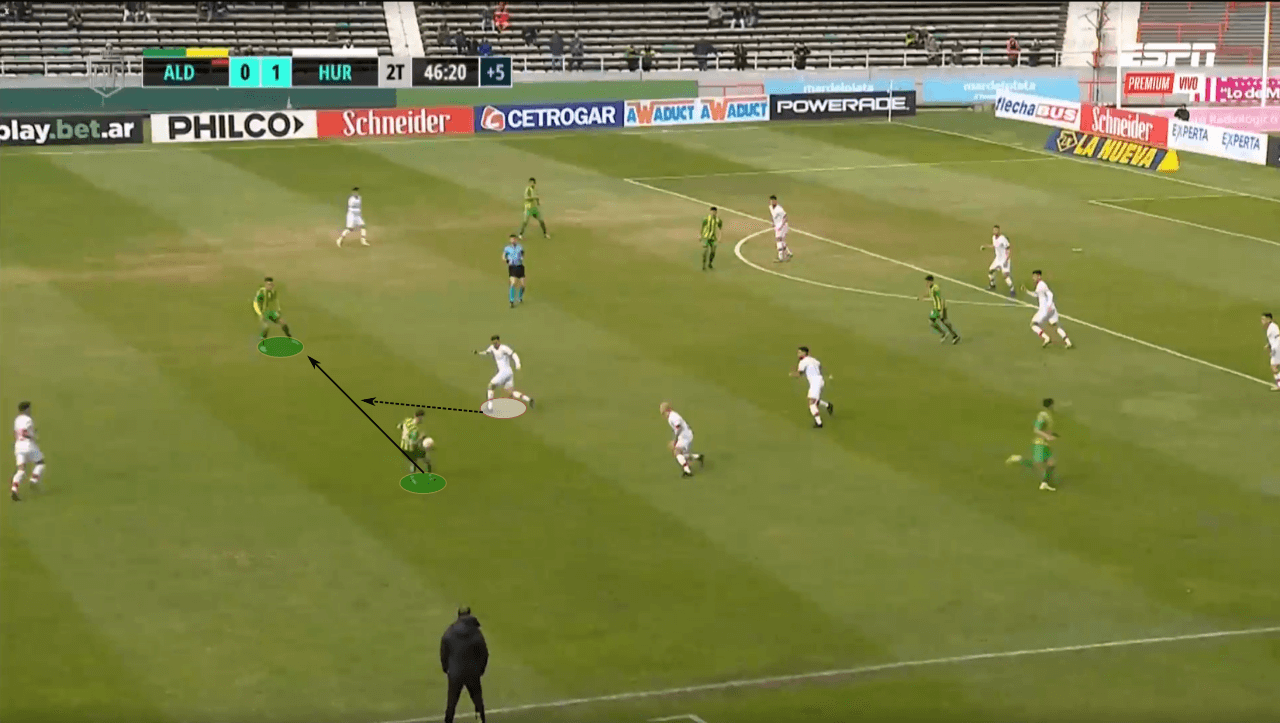 The 20-year-old kid from Buenos Aires is a tremendously technical defender. Despite having a relentless intensity to his defensive game, when performing tackles and challenging for the ball, he does so with incredible effectiveness. Hezze knows when to stay on his feet and exactly when to perform the challenge.

At 8.63 defensive duels per 90, he is again very active in the defensive phase. Additionally, his 58.59% success rate is quite impressive given this high volume. Aerially, the 177cm midfielder is also able to contribute significantly. In 2022, Santiago has averaged 3.88 aerial duels per 90 with a 52.81% success rate.

Against Aldosivi, his astute defending was on display once again. The Huracán midfielder won five of his seven defensive duels. The 20-year-old also had 20 total recoveries, with 10 of them being in the opposition half. In the instance below, when the defender performs a turn, he surgically extends his legs and challenges the ball. 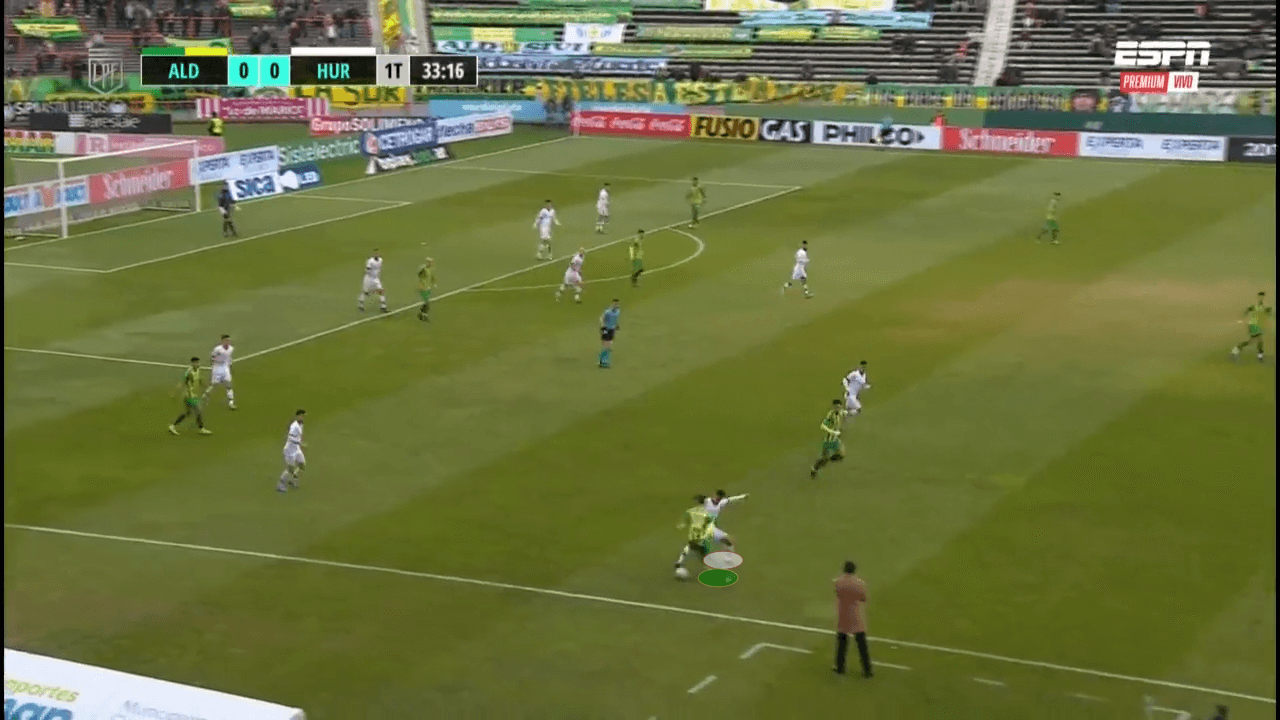 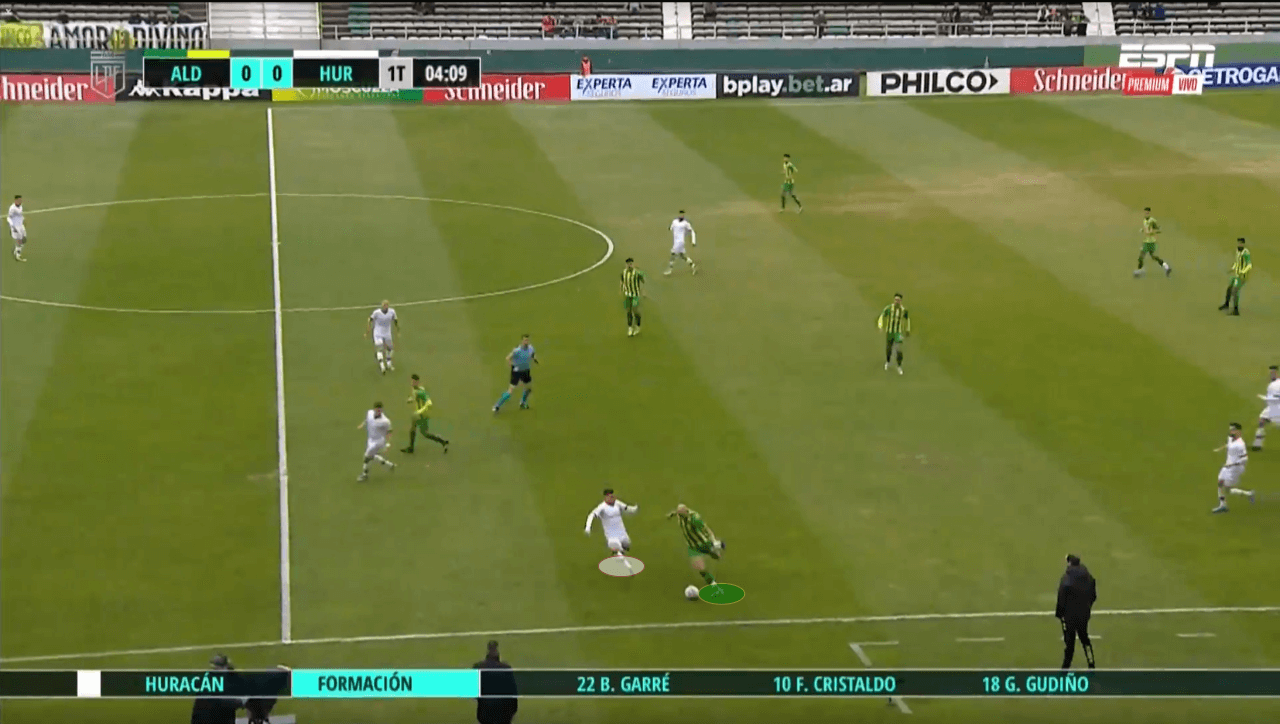 His ability to read the opponents and their intentions is also significant in this department. As attackers drive at him, he reads their body language and anticipates their actions. In this instance, he realises the attacker will dribble to his left rather than passing it to his right, so he makes the step over and wins the ball. 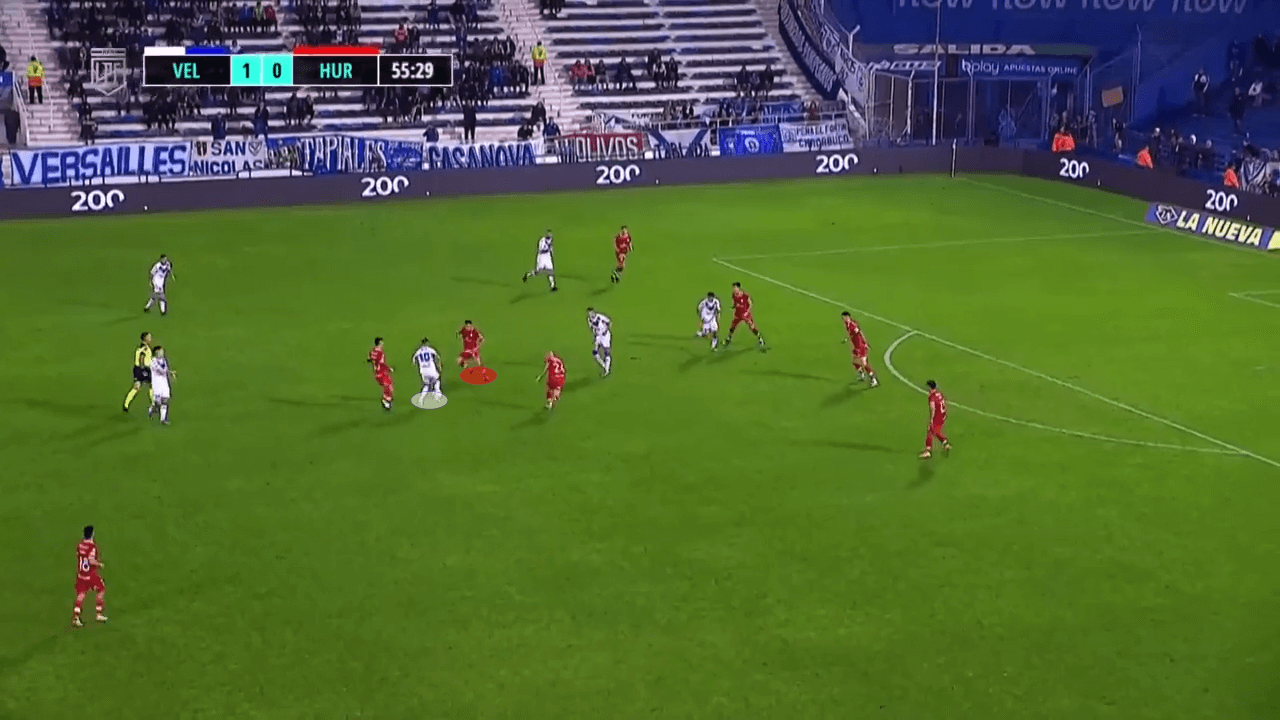 He is also conscious of his own body language, always ensuring he has the best opportunity to recover the ball given the scenario around him. This is especially helpful in transitions when the attackers are driving at him. Below, as the opponent begins to dribble at him, he performs a half-turn to be in the best position to chase him. When the ball is knocked past him, he accelerates, recovers it, and plays it back to the keeper. 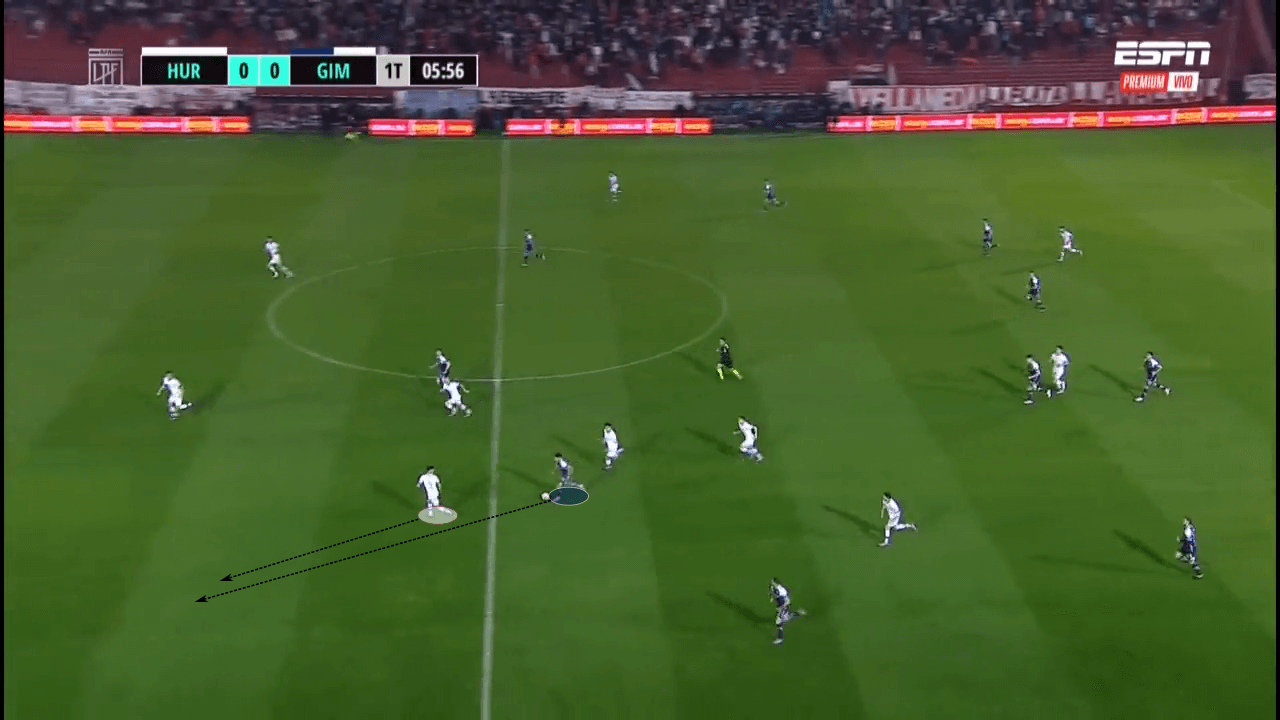 Once again, his aggressiveness is on display as he beautifully recovers the ball against Independiente. Initially, he steps up to the opposition player in the middle of the pitch. When the ball is played backwards, he continues his pressure onto the next player and performs a tackle to recover the ball. 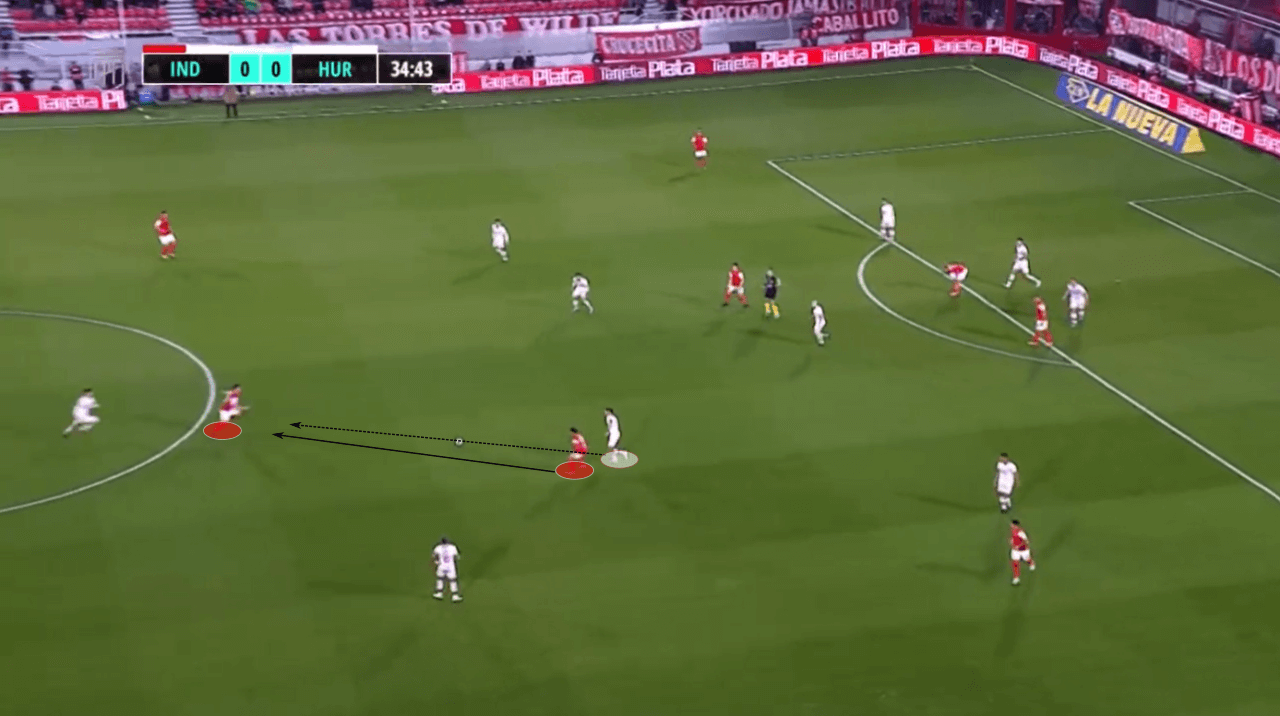 In modern football, it is simply not enough to be solely a ball-winning player. Especially in the midfield, players must be able to contribute to all four phases of the game. In addition to being fantastic defensively, Santiago Hezze is also able to contribute to possession through his passing and off-the-ball movement. He is not one to carry the ball or dribble past opponents, as seen by his 0.57 progressive runs per 90 and 1.09 dribbles per 90. On the contrary, his work is through a versatile passing profile and intelligent positioning throughout the pitch.

His movement off the ball is the biggest factor behind his successful involvement in possession, more specifically, his occupation of spaces within the defensive organisation. However, at times, he is willing to drop in between the centre-backs and initiate possession ahead of the defensive block. 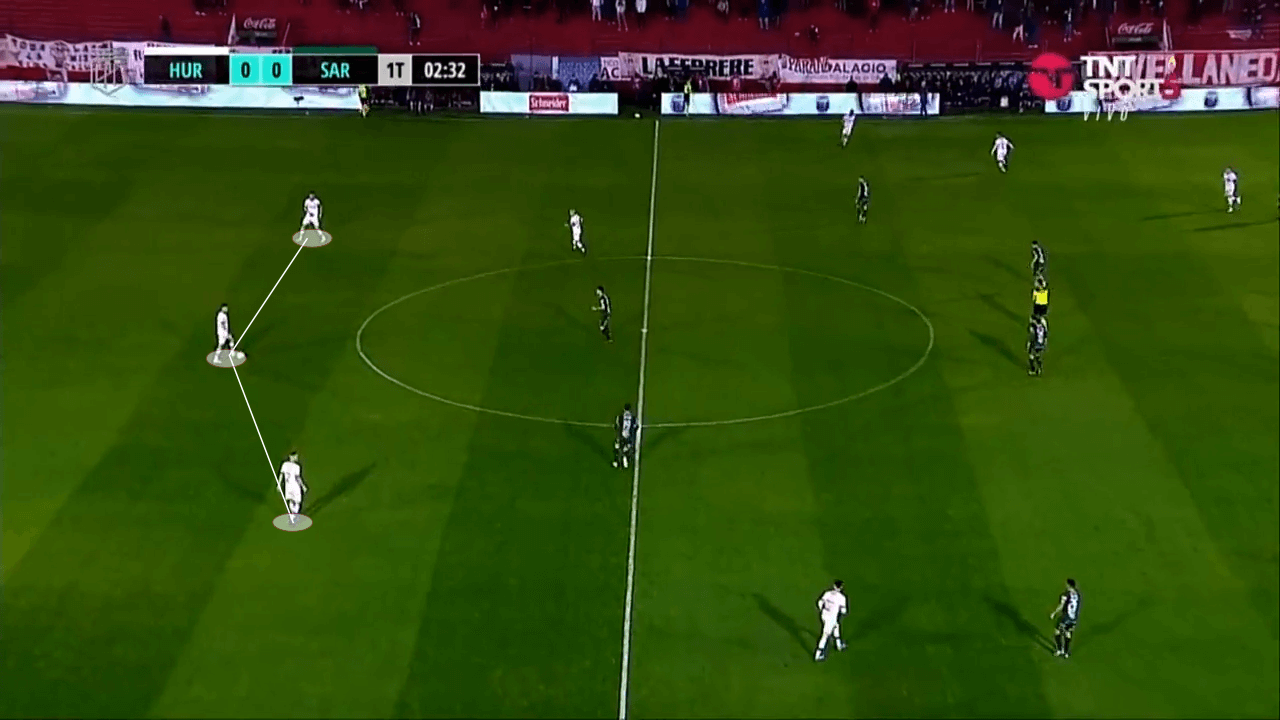 He is also able to find spaces behind the first line of pressure. He creates these passing lanes and receives the ball within the defensive block. Usually, after receiving it, he will move it along with quick short passes. 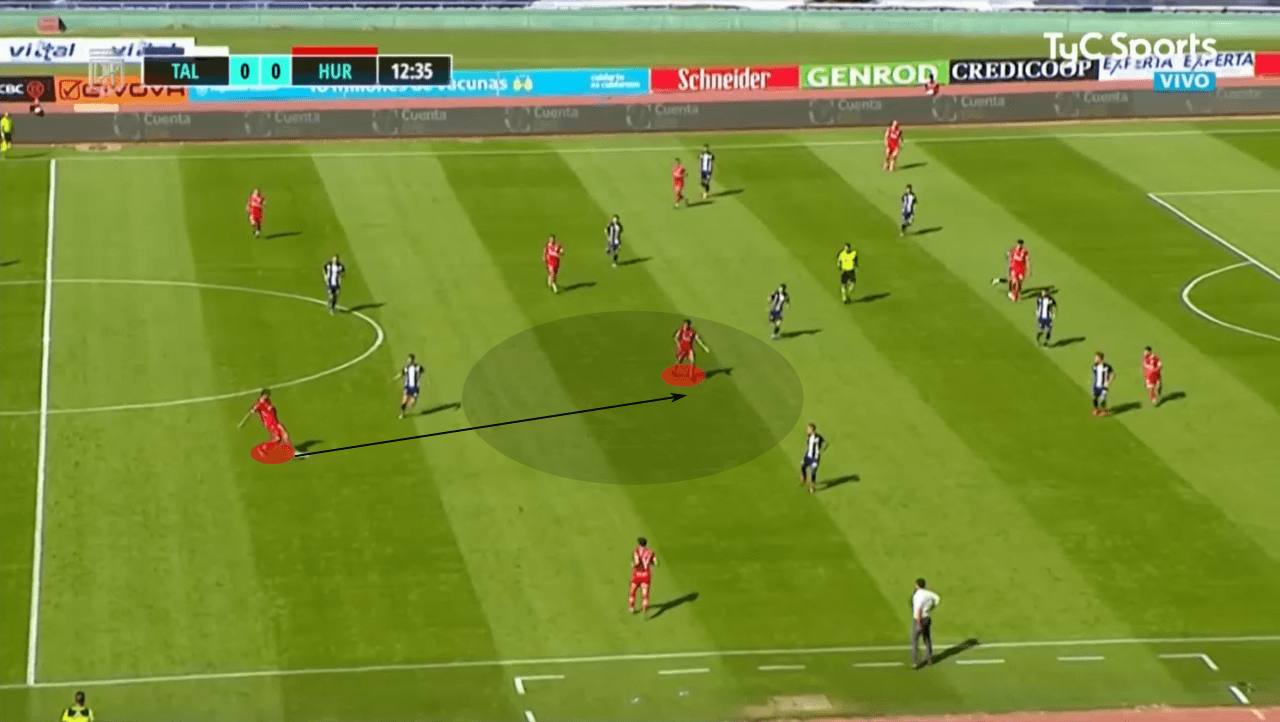 In other scenarios, he is able to support possession as his team tries to break down low blocks. By attacking spaces like this and receiving the ball, he helps his team retain possession and maintain the tempo. 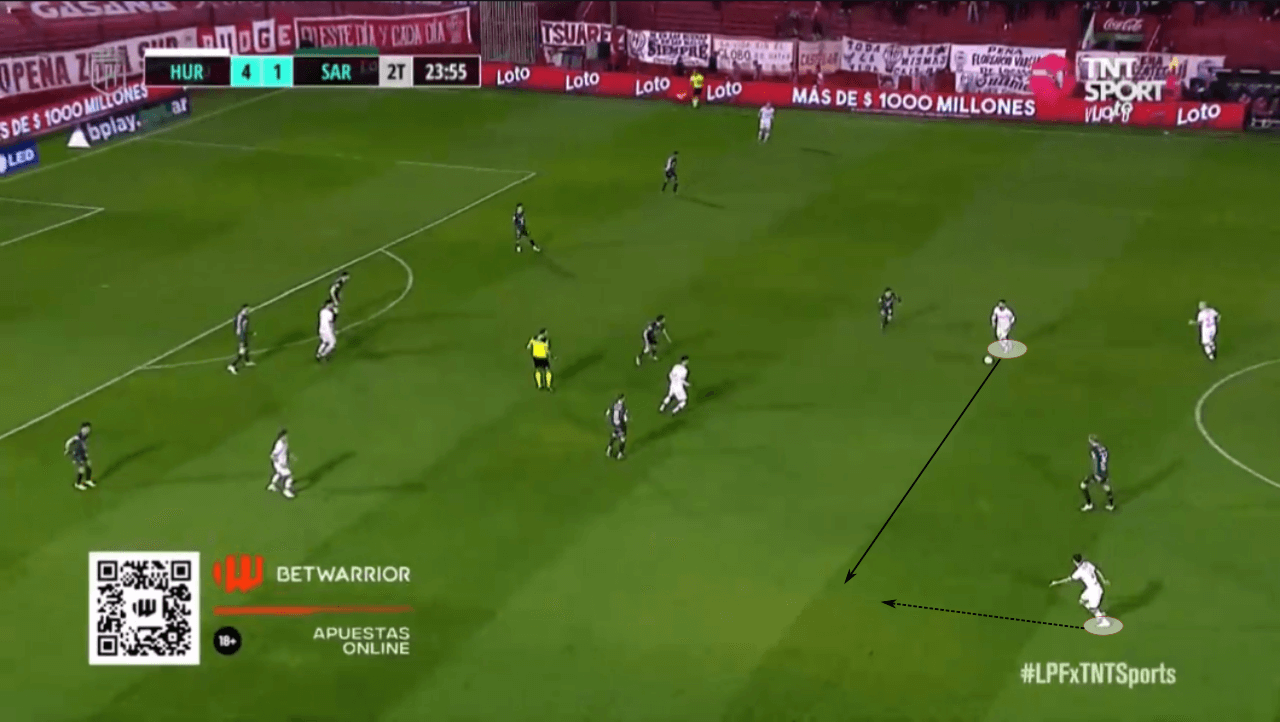 His movement also tends to be considerate of the ball carrier and the opponents around him. Hezze scans the environment and performs his movements accordingly, creating optimal passing lanes in key spaces. He is also very press resistant, with the ability to receive in tight spaces without losing his composure. 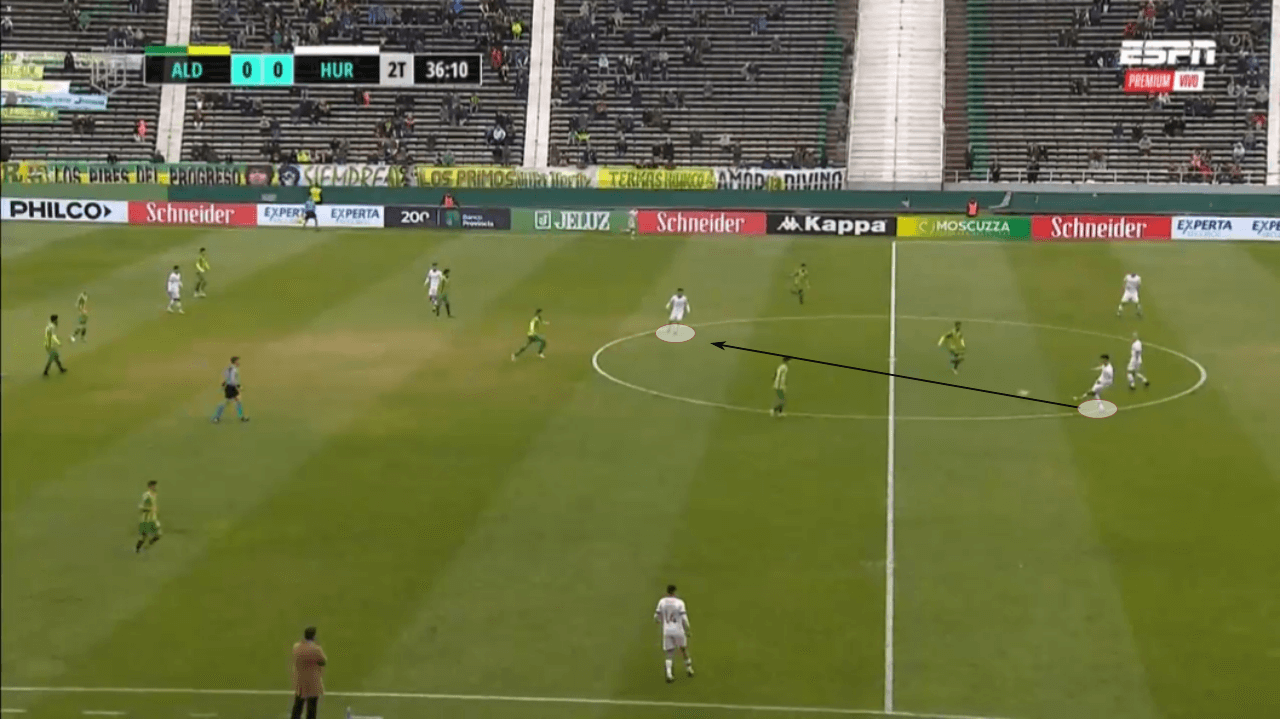 As mentioned, his passing profile is rather versatile. His most significant work is at the beginning of the midfield with quick short passes. By moving in and out of gaps within the defensive organisation, he allows his team to progress forward, or at least retain possession and ensure control. Additionally, Hezze is able to launch longer and more progressive passes into the final third. Of his 37.46 passes per 90, 14.59 are lateral passes while 12.29 are forward passes. The 20-year-old also averages 5.75 progressive passes per 90 and 6.32 passes to the final third per 90. 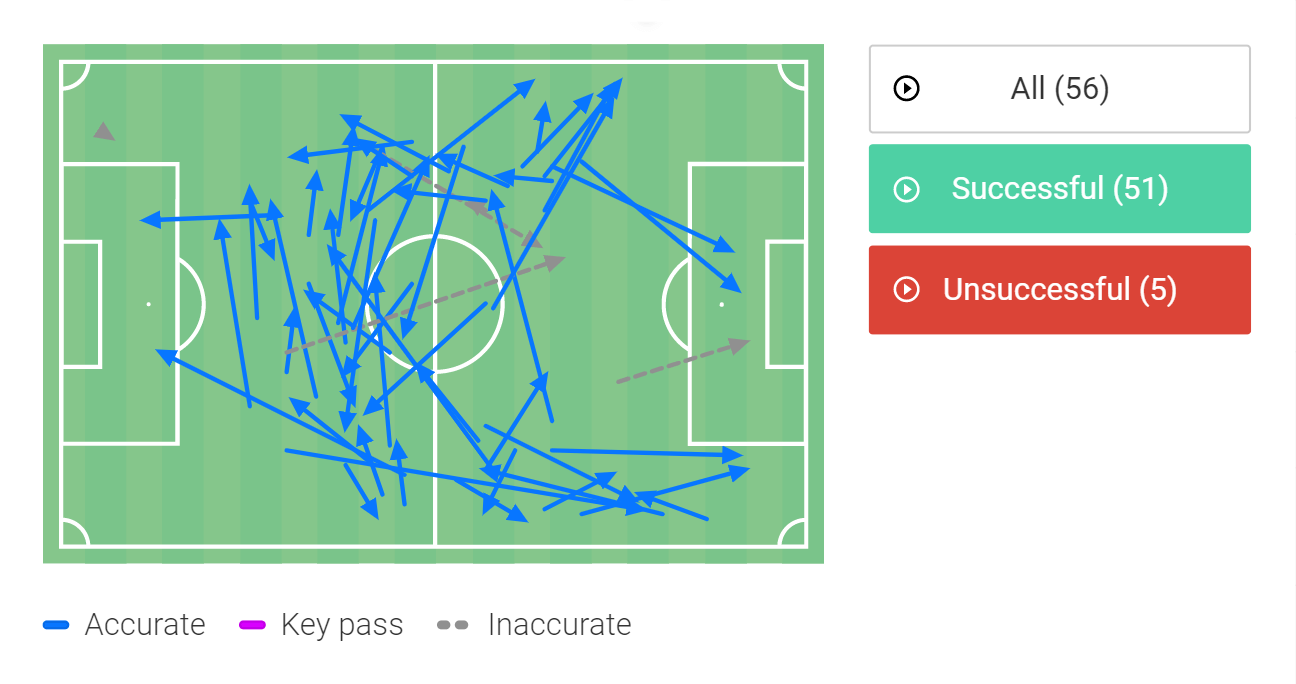 He contributes to retaining possession and maintaining control by constantly offering support and creating passing lanes. Mostly behind the first line of pressure, he will pop in and out of passing lanes to keep moving the ball. In the example below, he receives it from Lucas Merolla before immediately playing it to Fernando Tobio on the other side. 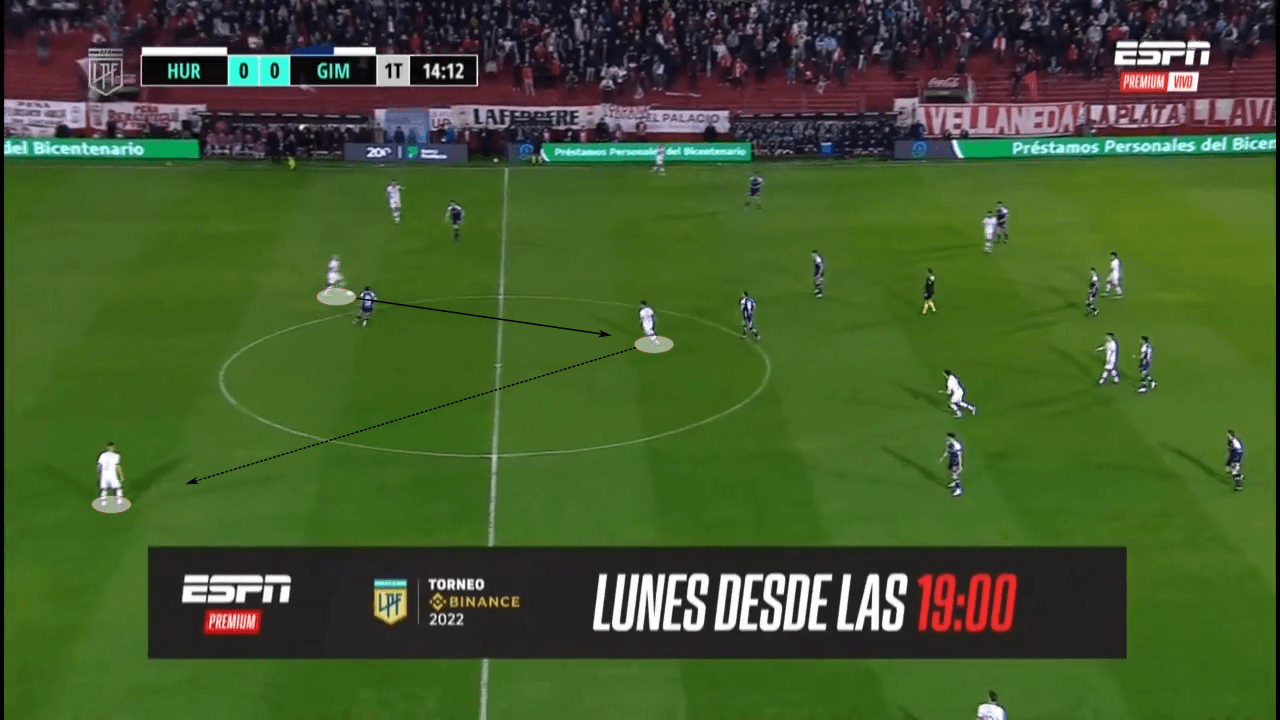 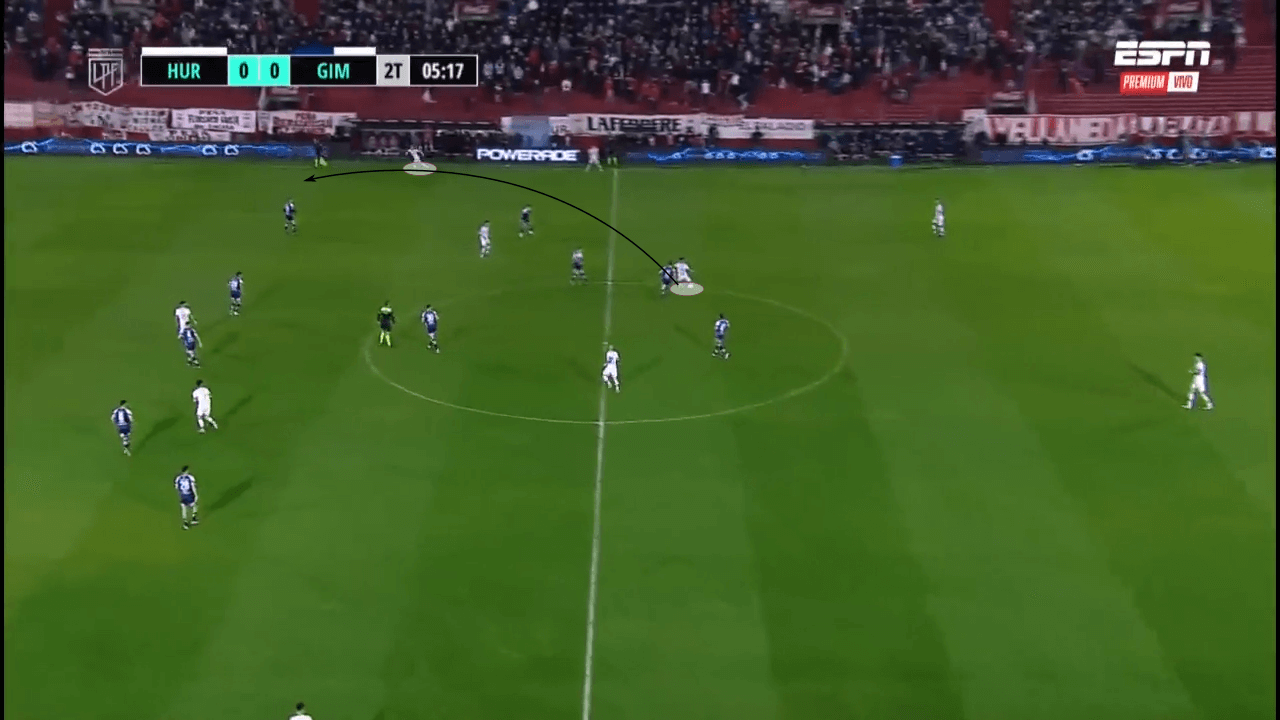 With 4.14 long passes per 90, Hezze does this relatively often. In another scenario, he performs a similar type of pass. As Huracán attack through the left, the entire defensive organisation shifts over. After Santiago receives it, he immediately turns and plays the long switch, where his teammate is running free. 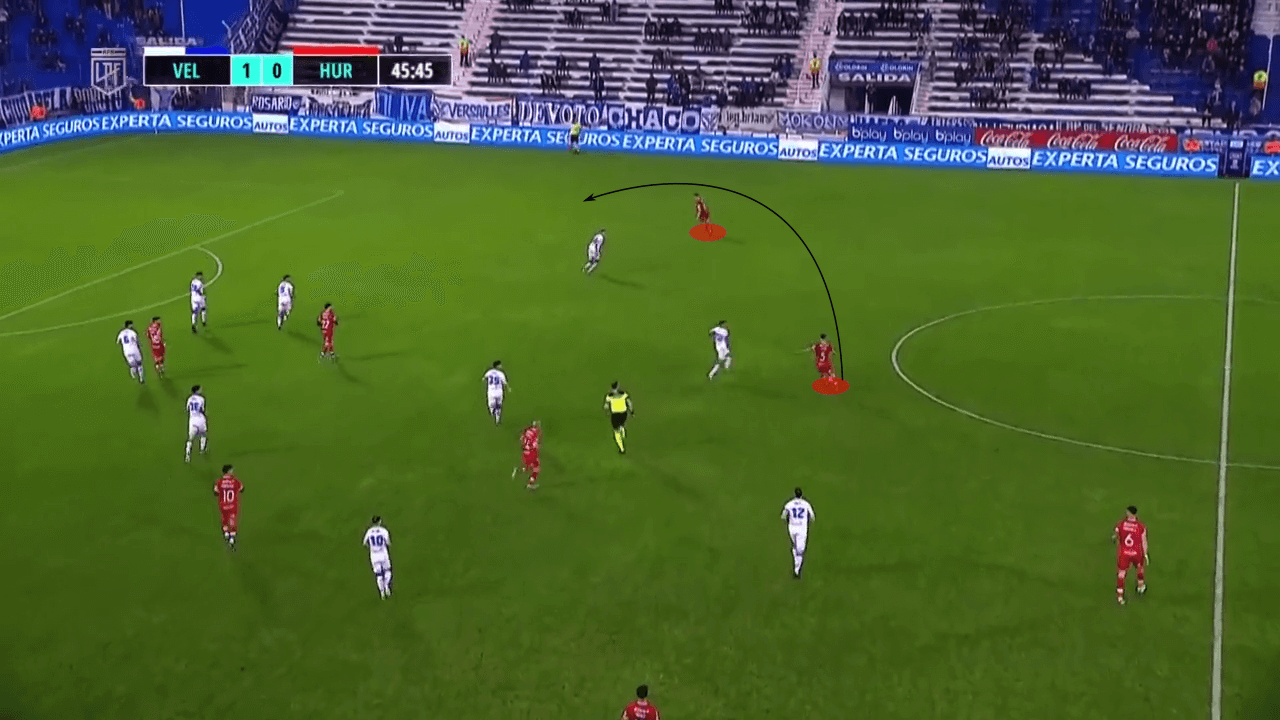 When receiving it further up the pitch, the Argentinian is also able to play dangerous passes into the final third. His awareness allows him to do this with speed, immediately playing the pass after receiving the ball. 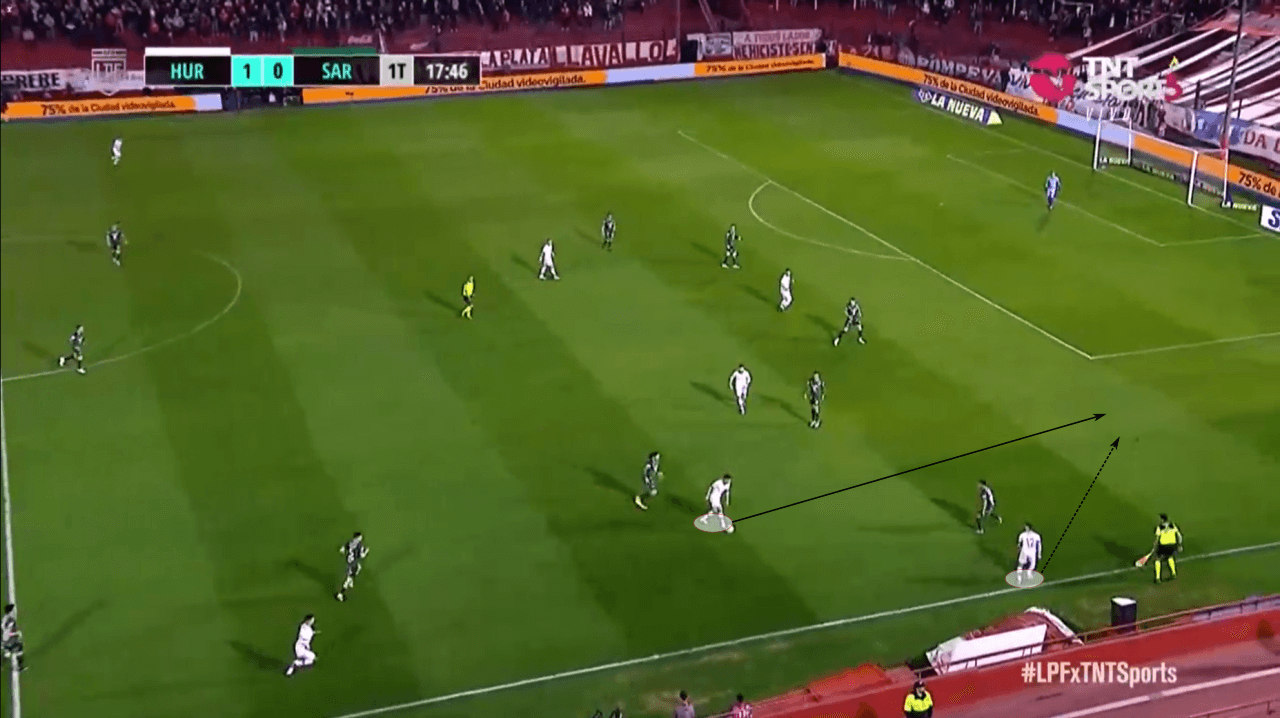 Now in transition, he launches a dangerous counterattack after recovering the ball. In a similar style, he plays a progressive pass into the final third where his teammate can attack the space. Hezze’s passing and vision complement his ability to recover the ball, allowing him to constantly initiate dangerous transitions. 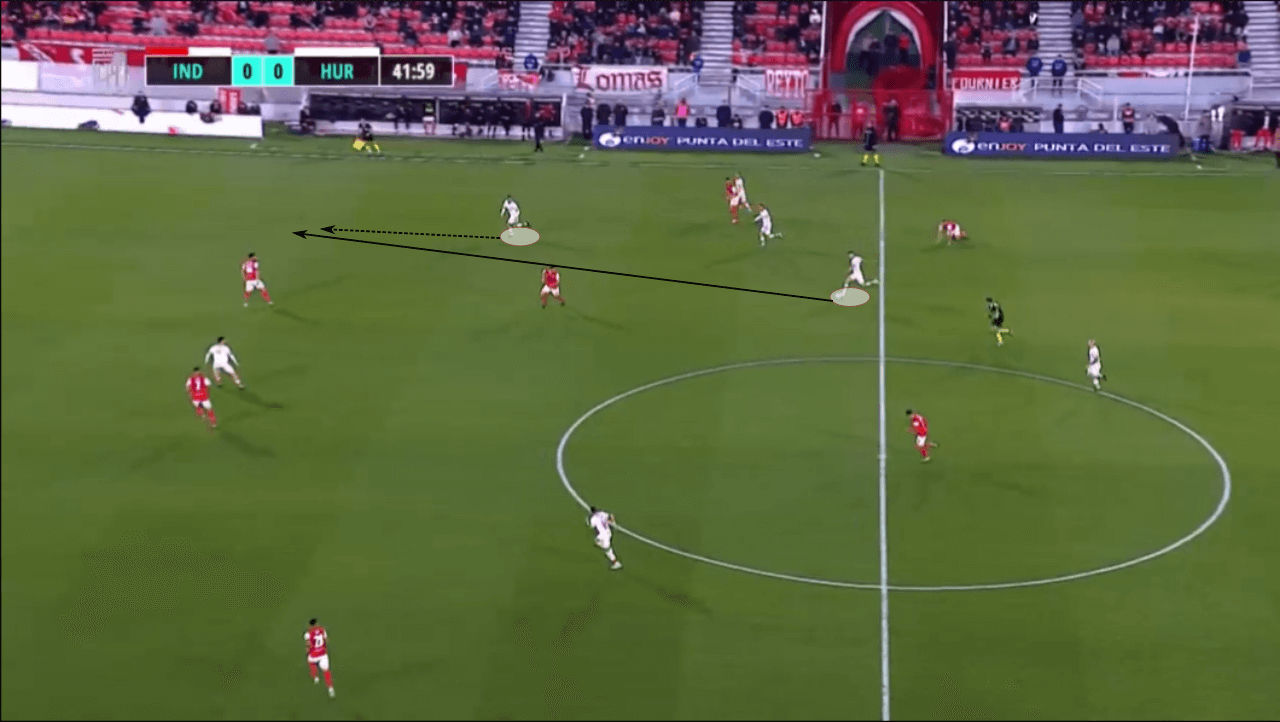 Santiago Hezze is an exciting prospect out of Argentina’s Huracán. The 20-year-old defensive midfielder has a dynamic profile, excelling in all phases of the game. Defensively, Hezze is an incredibly technical defender with relentless intensity. With the ball, his balanced passing profile makes him a powerful weapon in construction.

This next generation coming out of Argentina may very well turn out to be a golden one, and Santiago Hezze is one of the most promising prospects leading the line. It will be interesting to see how his career develops.