Samuele Ricci 2021/22: How Empoli’s diamond in the rough is shining in Serie A – scout report

As years have passed, the defensive midfielder role has gone through a thorough evolution within the football landscape. Once upon a time, players occupying this role were referred to as “water-carriers’ – players that may not have exquisite technical ability, but did the required running to compensate for creative players’ lack of defensive thrust.

In the modern-day, football has gone through a major transition, with some defensive midfielders now being the focal point of the team, instead of a necessary accessory. Sergio Busquets of FC Barcelona and Xabi Alonso of Real Madrid are perfect examples of this tactical shift, and a new generation of players playing pivotal roles at the base of midfield are emerging.

The Premier League’s Declan Rice and Serie A’s Sandro Tonali are players making a name for themselves, but another player that should be mentioned within this young-gun catalogue is Samuele Ricci. Ricci is a 20-year-old defensive midfielder currently playing in Serie A, for Empoli. In his breakout season in the top flight, Ricci has displayed a lot of promise and has contributed to the success of Empoli, as they currently sit ninth place, in their first season after promotion.

This tactical analysis and scout report will delve into what makes Samuele Ricci so exciting, besides aspects of his game which he may need to improve upon, to reach the next level. Last, I will evaluate the value he provides to his team.

Samuele Ricci has been stationed in a variety of roles in his young career so far. Throughout the 2020/21 season, during Empoli’s Serie B campaign, Ricci’s position varied within a midfield diamond. At times, Ricci would be placed as an interior, either on the left or right-hand side and as an attacking midfielder behind the strikers. As well, during this season, Ricci would be employed as a number 6 within the same formation. The U21 international days of being moved around like a chess piece seem to have passed, based on him being a mainstay within Aurelio Andreazzoli’s team. Not that Ricci has not played in other positions during the 21/22 season; the difference being, his altering of positions is because of necessity and team rotation, rather than him not establishing himself in a position.

Samuele Ricci has the technical ability to play further forward, but him playing as the deepest midfielder suits his skill set. From that position, he can dictate play and have the required angles to find passes to teammates, medium and long-range. 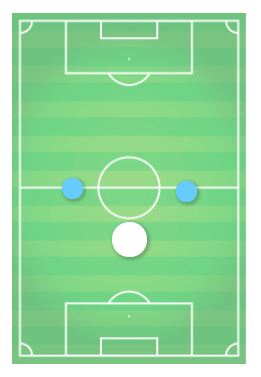 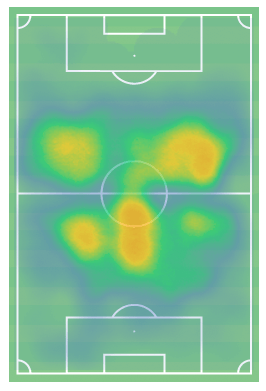 As mentioned prior, Ricci playing as a number six is optimal when assessing his skill set, when compared to various positions he has played in previous seasons. Upon observation, Ricci is a ‘ball-retainer’, a player who gains great skill when keeping hold of the ball when under pressure. The Empoli midfielder can do so with his swift and sharp body movements, which he uses to great effect to disrupt opposition markers’ body orientation and allow Ricci to exit and progress forward. In addition, when pressed from incoming danger, Ricci excels when using his first touch to knock the ball into nearby space and catch opponents off-guard.

Another element within his ball-keep capabilities is his knack for protecting the ball, with his low centre of gravity, Ricci does well to get his body in-between opponents and the ball, securing it in his control and finding a teammate in proximity. Ball retention is useful for any team to possess. For the simple fact, if you want to play with the ball, you need the ball, and having a player that can keep hold of the ball and keep possession has its perks. This sentiment can be emphasised for a team that may not contain the talent of top teams within their division, and having a player that can help sustain possession and flip the pressure threshold onto their stronger opponents is very useful.

Ricci understands the surrounding space when patrolling the midfield, through his use of scanning to interpret what is around him. His scanning enhances his decision making, also he creates pictures of his teammates and possible incoming pressure. The art of scanning is not simply looking at one’s shoulder, the timing of these movements is also quite important, and Ricci shows this within his play. He scans at a high frequency and scans while the ball is travelling to him from a pass from a teammate, constantly updating his knowledge of the player location, and maximising his decision-making process. With his good interpretation of space, he mixes this well with his mobility; to make the required lateral movements across the pitch become a viable passing option.

A perfect example of his swift body and ball skill, combined with his retention and scanning, can be seen during an Italy U21 fixture, against Romania U21. While the play takes place, Ricci is looking off his shoulders, firstly looking at Romania’s striker then their midfielder, just behind him. 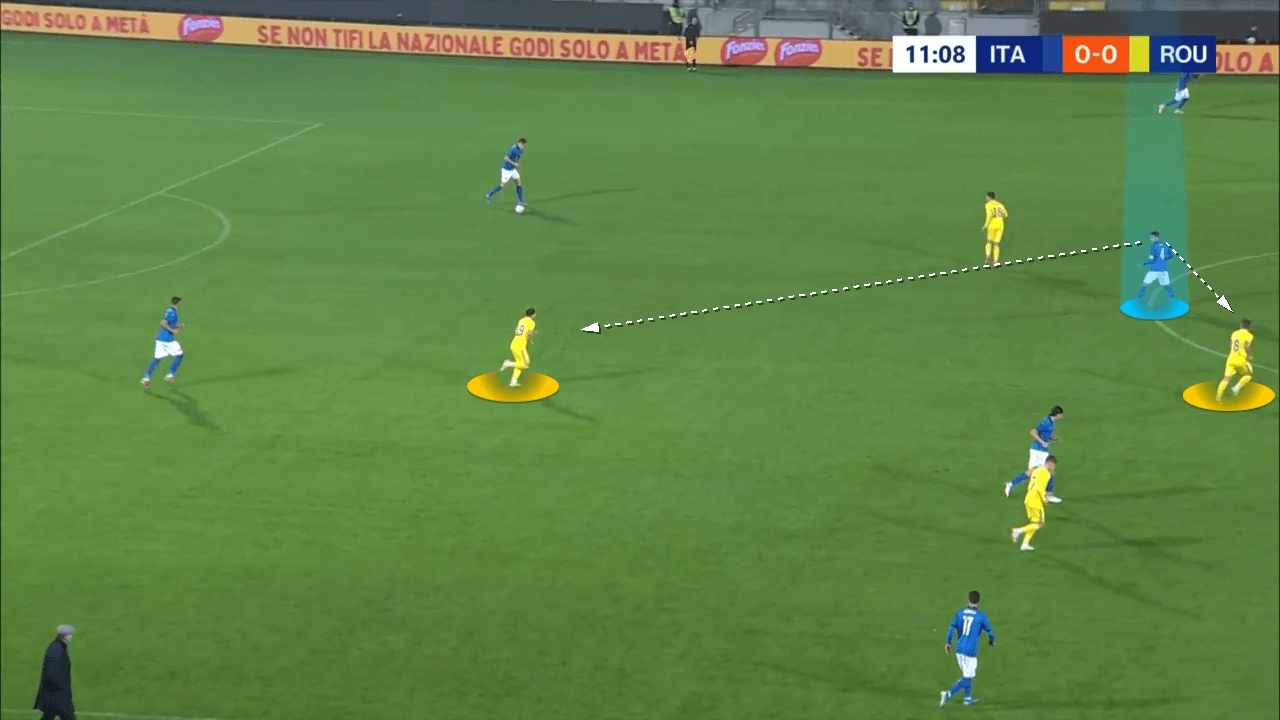 The ball is played out wide, and Ricci moves in the ball’s direction. The wide player makes inwards pass into Ricci, and as the ball travels towards him, two opposition players are ready to press. 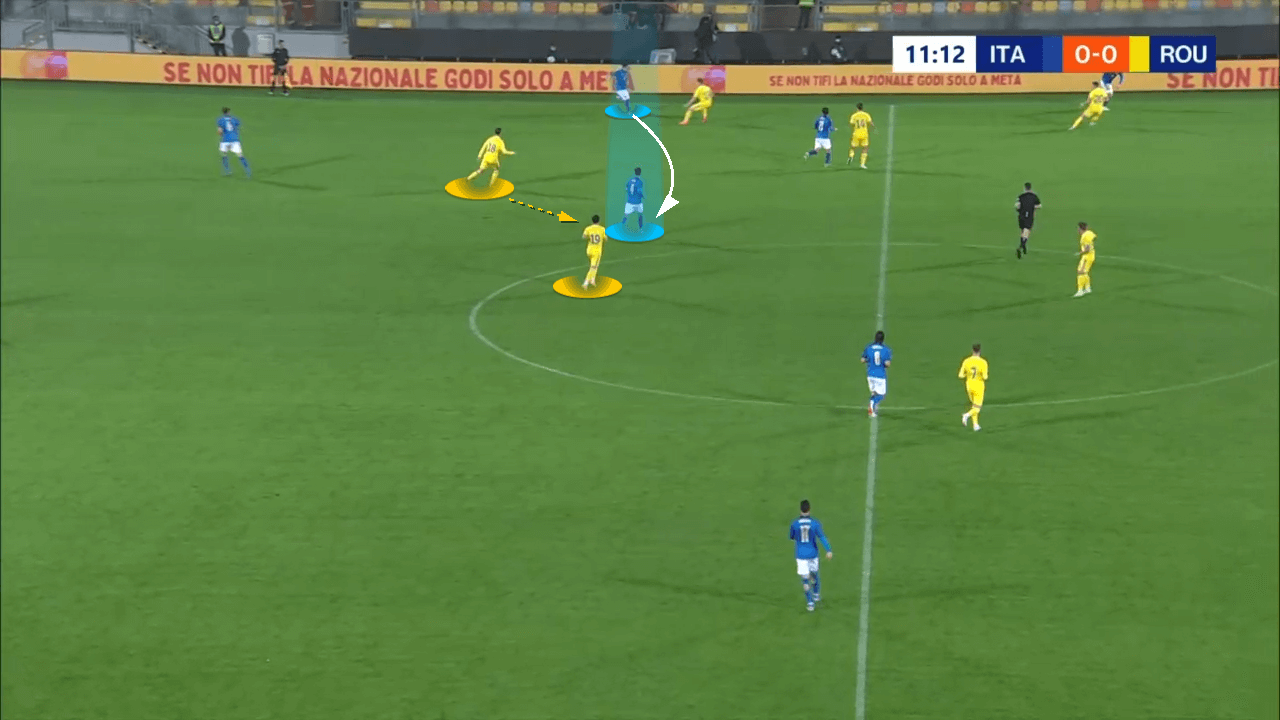 From this position, with markers on either side of him, Ricci can quickly shift the ball to his right-hand side, into open space and change the direction of play to the right-hand side. 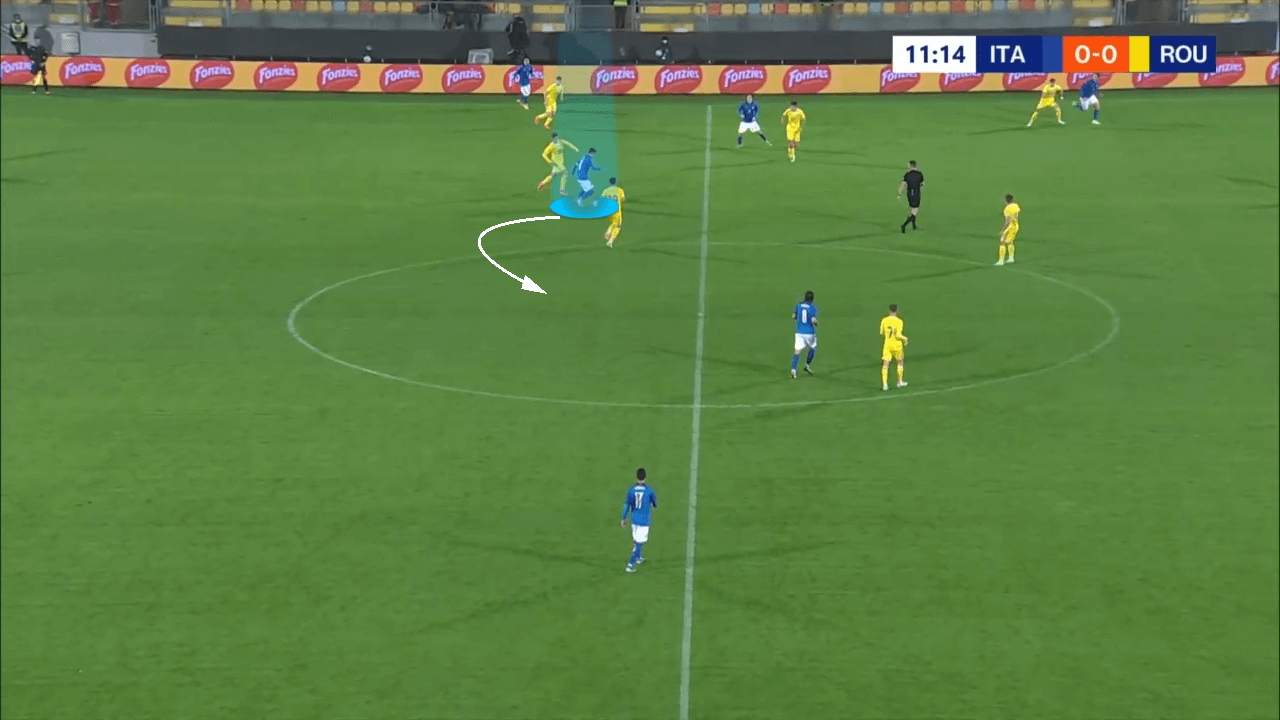 Samuele Ricci shows his forward-thinking nature, and the foundation of quality is his receiving skills. Ricci’s actions and first touch are neat and tidy, allowing him to play in one-two combinations and complete actions with minimal touches of the ball. Another example of Ricci wanting to play forward can be seen through how he receives; constantly facing the opposition goal, ready to progress forward. Once he has the ball, the young midfielder is a comfortable ball carrier, but only shows the skill when open-spaced if afforded to him.

Statistically, Samuele Ricci does well, as so far this season, he has amassed 2.63 tackles per match, as well as 1.61 blocks and an impressive 2.70 interceptions per match. These stats paint the picture of Ricci being an above-average defender at the very least, and this is moderately true. Ricci is not a tough tackler, as he much prefers to step into passing lanes and retrieve the ball this way, hence the high interceptions numbers. With all, the Empoli midfielder has some technical issues that must be ironed out on a defensive front. A major problem Ricci faces is his 1v1 defending; the defensive midfielder is prone to get bypassed by opposition players because of his poor body positioning, besides he is being flat-footed, leaving him not able to match his opponent’s quick movements.

As well as his 1v1 defending, Ricci must improve his defensive positioning, which can let him down. Here, Spezia is in possession, and Ricci is tightly marking an opposition player. The issue within this still is where Ricci has placed himself against his man. Ricci is on the wrong side of his marker, allowing him a quick exit route to the centre of the pitch, which is far more dangerous than a pass going out wide. 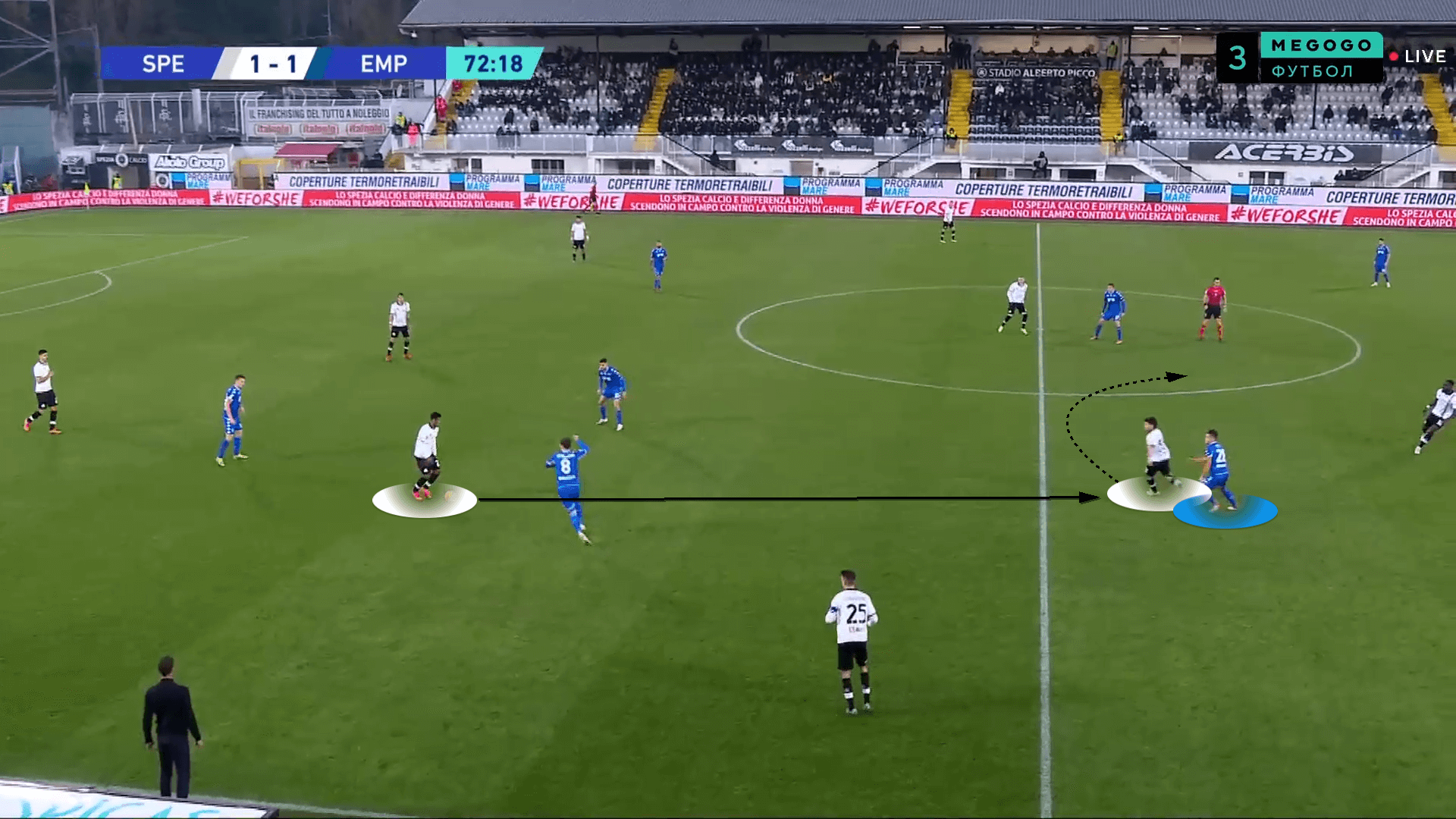 Previously mentioned, creative responsibility has somewhat shifted, as, depending on the system, the deepest midfielder can create from those areas or provide balls into the final. Also, within this role, the deepest midfielder can have the platform to supply this ball forward and contribute offensively. Regarding Ricci, the young Italian is in-definitely a number six, with his ability to create connections, keep progress on the ball and set the tempo. But, within these positions, Ricci passing over long ranges can be quite inconsistent with his execution. Frequently, Ricci’s passing can be one of two things, under-hit or over hit. Either way, the ball is not meeting his desired target properly. Not that there are no signs of him becoming a consistent long-range passer. He has demonstrated these types of passes, but this makes him inconsistent. It’s on and off.

When afforded space, Ricci can create from deep. Here, Empoli is playing within the final third versus Spezia Calcio. Ricci pulls wide and receives the ball. 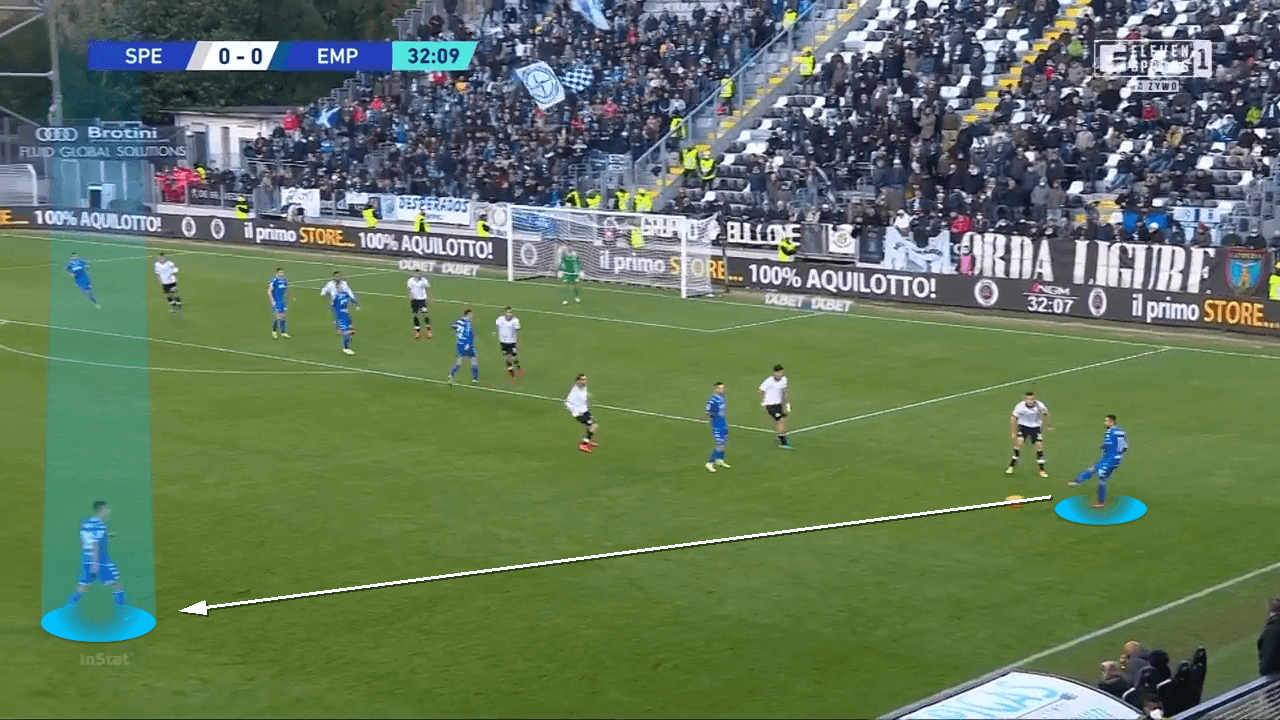 Now, receiving in open space, Ricci spots the run of his fellow teammate, opens his body and plays a well-weighted pass, creating a shooting opportunity. 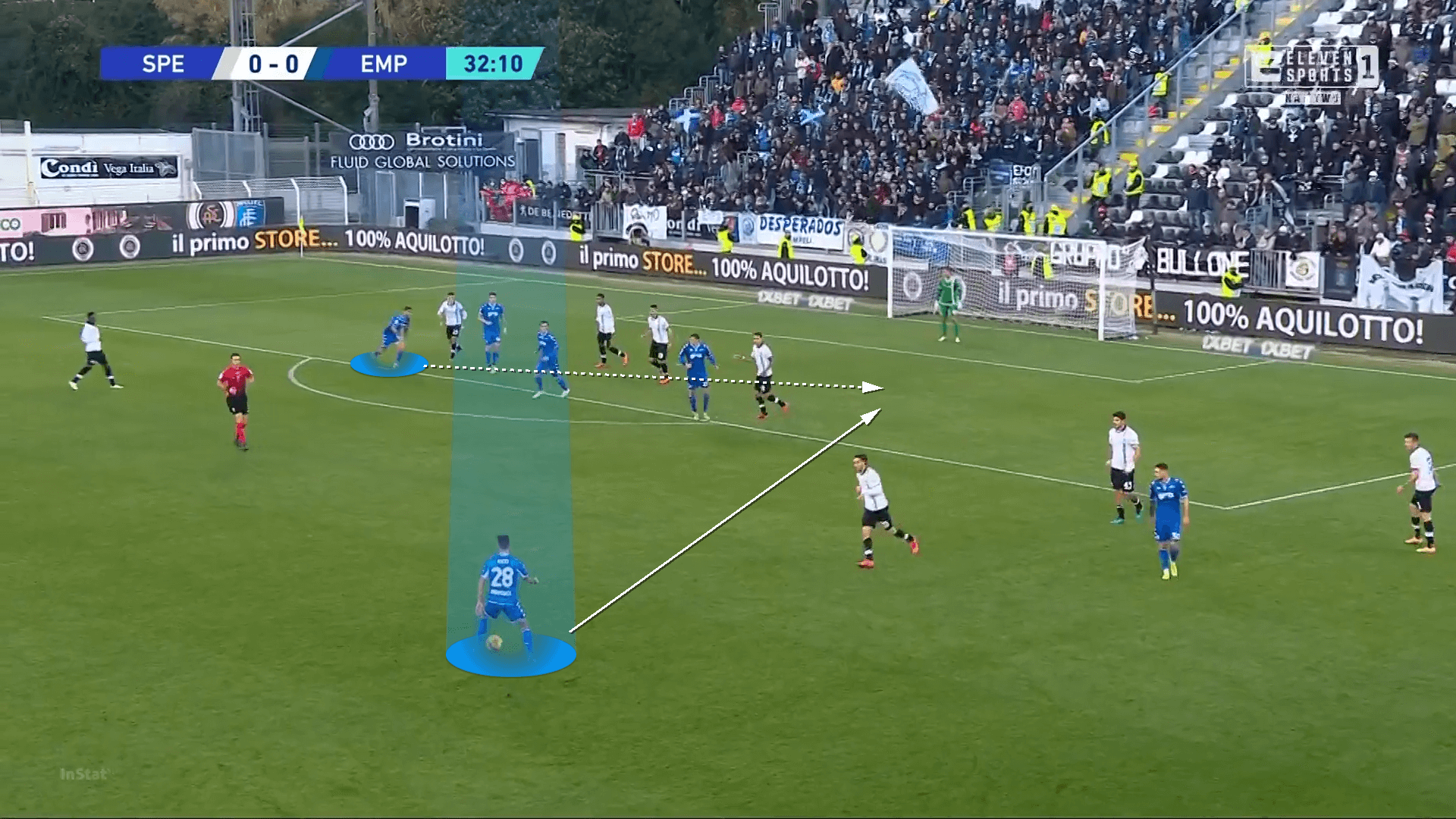 Ricci has this type of passing within his game but does not occur as often as one would like. As mentioned above, Ricci ranks well in his defensive statistics, but his technique during these actions needs improvement. The same can be said for his deep creation; for his value within a team to rise, the young midfielder must improve in attacking or defensive sense, to truly take the next step in his career.

Samuele Ricci is a very interesting player, and he is the archetype holding midfielder in a team wanting to progress the ball from front to back. The young midfielder has a skill set that allows him to do so and, to a degree, adds value to Empoli. He is a player that can hold on to the ball well and beat a man with his first touch, but at the highest level, more must be added to one’s repertoire. His passing is sharp but could be sharper. His defending is adequate, but must be redefined. Ricci gets a lot of promise, and at only 20-years-old, he can only progress from his Empoli springboard.