After three fantastic seasons, FC Midtjylland decided to sell pivotal Raphael Onyedika, who was shining in the midfield, dominating possession stats and offering a key role defensively for them. Belgian Pro League‘s champions Club Brugge were the ones to sign the Nigerian 21-year-old player for a fee close to 10 million euros. Two days later, they announced Emiliano Martínez, a 23-year-old Uruguayan midfielder that hadn’t been playing for RB Bragantino at Brazil since his arrival there in 2021.

Martínez shone in the Uruguayan League for Nacional, one of the biggest football clubs in the history of the country. Thanks to his talent and high-performances week by week, RB Bragantino paid up to 3 million to bring him to Brazilian League. However, he just played 564 minutes in the Serie A thanks to an Achilles tendon issue that made him lose 46 matches.

The big space left by Onyedika had to be filled, and Emiliano showed up as the best option for them. He signed for the Danish champions and he has started brightly, playing in the ‘6’ role in the midfield.

Being one of the biggest young talents in his country, South America and now in Europe, we have decided to scout him and analyse how he has adapted to the Midtjylland first team with such ease. This tactical analysis piece will be a scout report of Martínez. It will be an analysis of the midfielder’s strengths and weaknesses, as well as looking at where he has fit into Capellas’s tactics thus far.

Emiliano is the very definition of a number ‘6’ but also of a typical Uruguayan player, thanks to his efforts on the pitch and his intensity off and on the ball. Listed at 184cm, the 23-year-old has the perfect height to play in this zone of the pitch but also possesses a strong build that helps him to beat players to win the ball back, as well as to shield it. 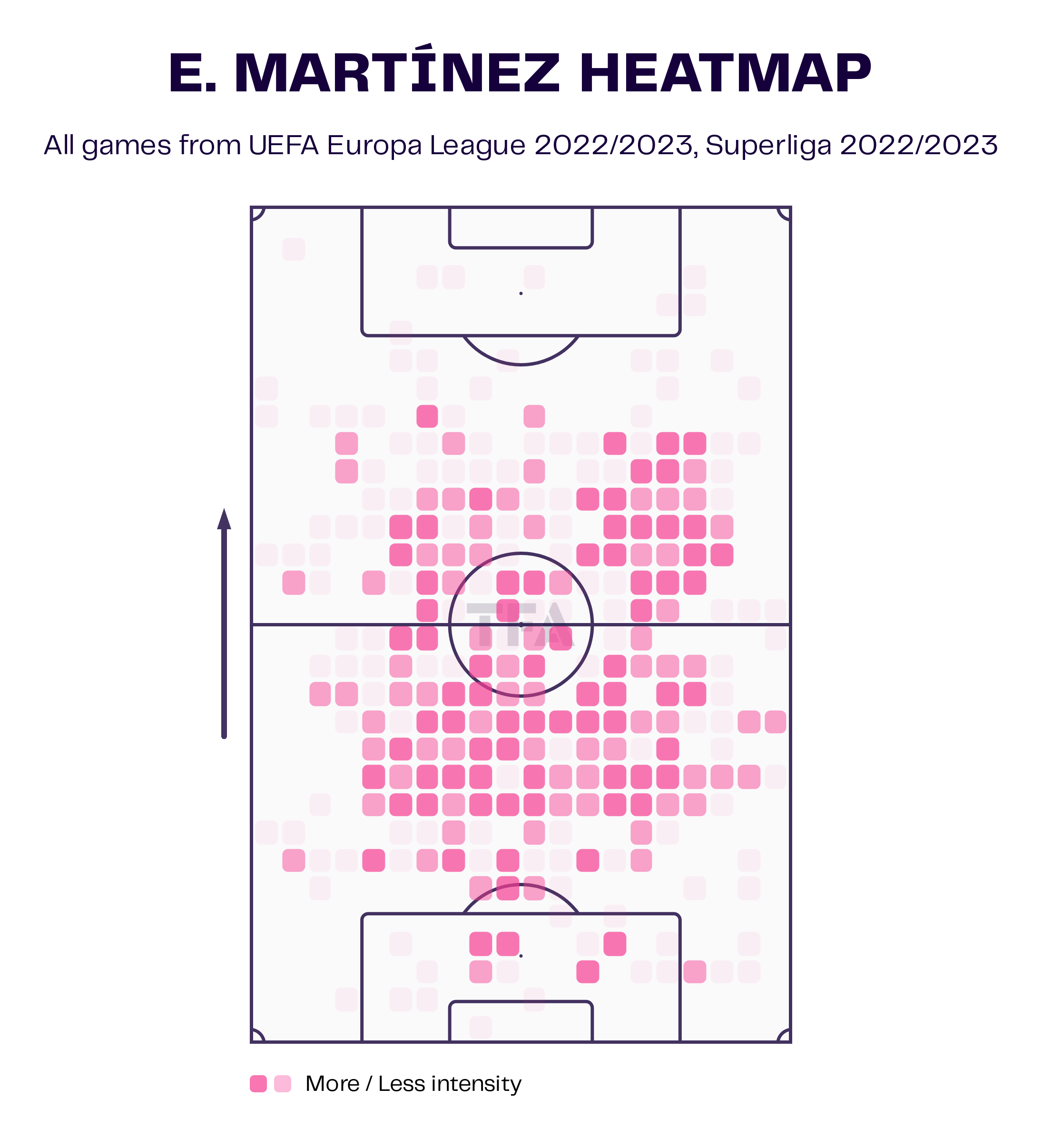 With few games played at the start of this campaign, we want to show where his actions have been distributed around the pitch. As we see in his heatmap, he likes to play mostly in his own third supporting his centre-backs to create numerical overloads or to make ball progression for his team between the lines. Let’s deep-dive into these kind of aspects of his game.

The first thing that catches the eye from Emiliano Martínez is the way he can act under pressure, not only because of his athletic body which helps him a lot to shield the ball and hold his marker but also because of his technical quality and super quick footwork that can make him get out of suffocating situations where two or more players come to take him down.

He’s very brave and calculated in every action he decides to make, and even more under pressure. When two players or more come to try and win the ball back, you just have to be completely sure of what your next action is going to be, and if it’s going to help the team and not put them in a really threatening situation from a defensive perspective.

This ability to escape with ease from very tight angles, to then release the ball to a teammate, is probably the biggest feature of his game. He likes to turn inside the cage markers put around him, but he also likes to touch the ball two-three times with both feet to get out. Against Feyenoord, he did it many times. 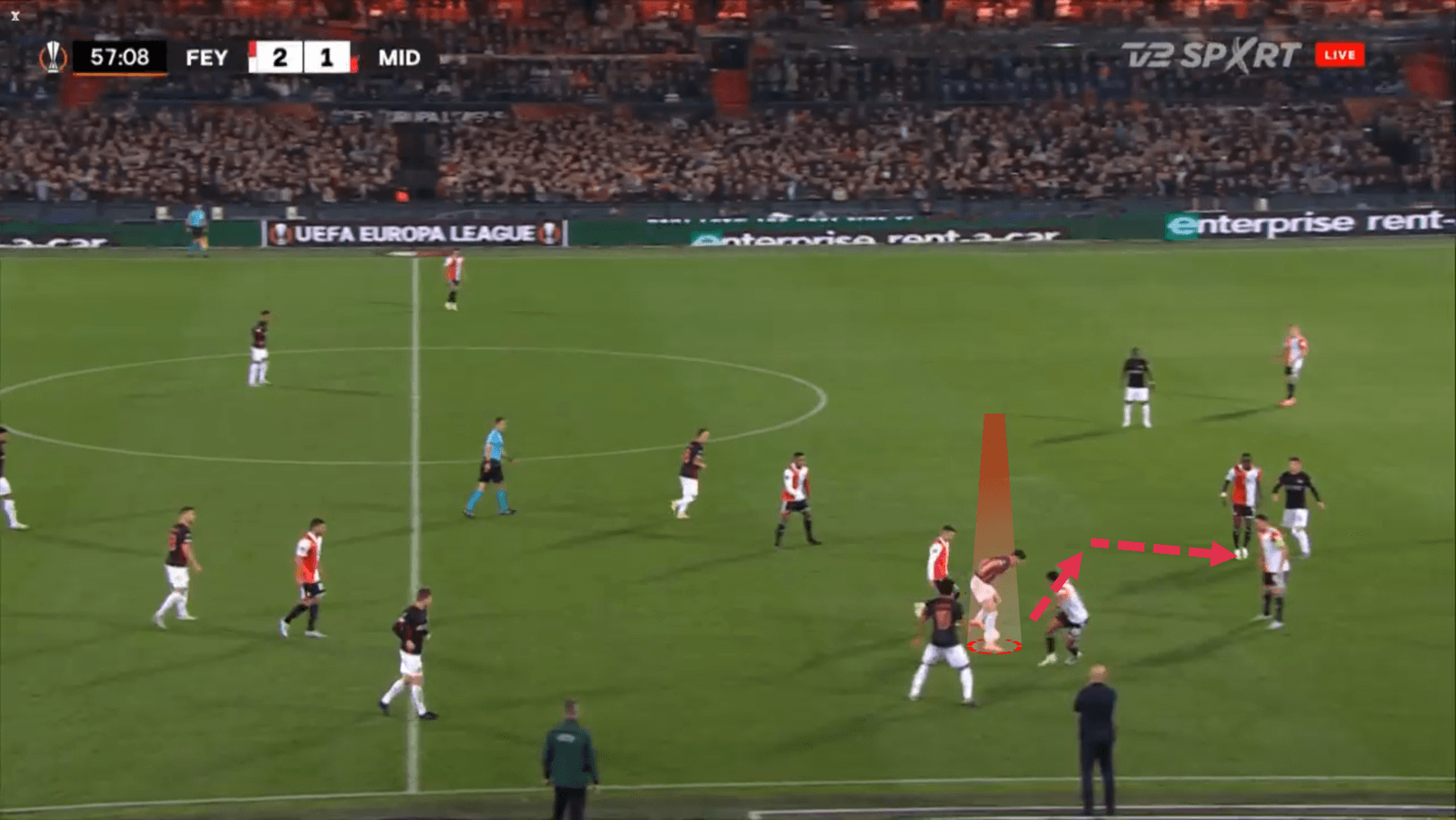 One of his trademark movements to escape pressure when receiving is the oriented control, normally doing it without touching the ball a single time, just feinting with his body to confuse the player marking him to go to one side, and he goes to another. These feints are well-known in his game and we see them several times in a single match, thanks to his elasticity to spin his hip. 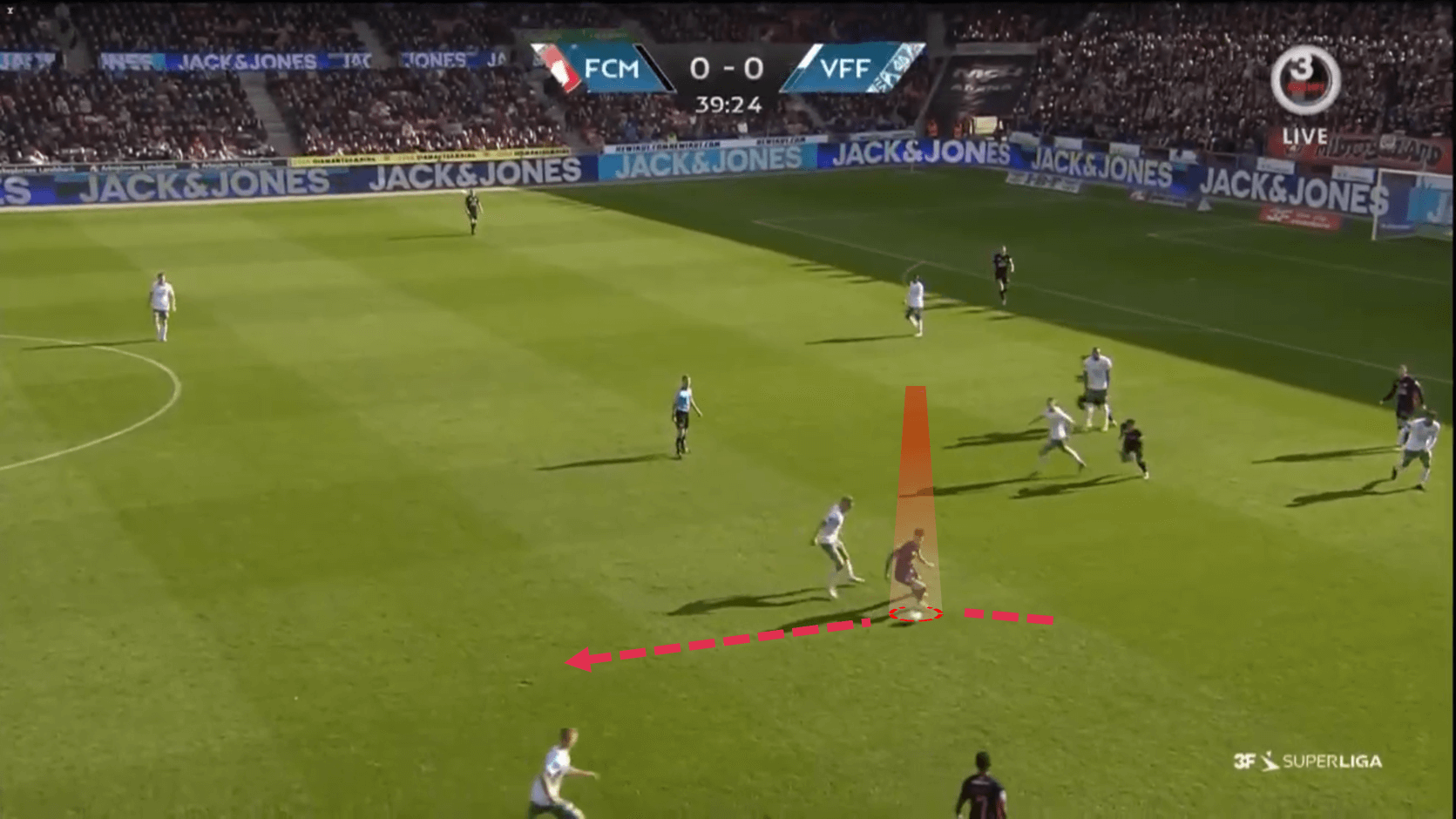 Midtjylland likes to play it short from the goal-kick, where you can see Emiliano sometimes being the focal point and the first pass in the build-up. In these situations, normally you see the ‘6’ being pressed from behind to try and steal the ball with a tackle. Emiliano solves these high-pressing situations with one-touch passes to the sides, to his full-backs or the centre-backs who position themselves more wide.

In confusing moments close to the penalty box, where his team cannot clear the ball quite well, Emiliano feels the pressure coming and he releases it quickly, always trying to find a teammate in front of him to start an attacking transition. This could be the only moment under pressure where the Uruguayan does not tend to try and get out with his dribbling.

Emiliano Martínez has a high range in terms of passing, but as well, his composure and balance when in control of the ball are naturally almost perfect. A few times you would see the former Nacional player losing the ball with a turnover or doing a bad execution.

He likes to touch very little of the ball and he knows exactly where the next pass is going to be thanks to his previous scanning, so he releases the ball very fast from his feet. In only two-three touches, he has decided where the ball is going and he makes the pass there. With this, he accelerates possessions as he doesn’t like to retain the ball when he’s unmarked and has time and space to make a decision. Normally, his passes are progressive and threaten the opponents between the lines. Midtjylland also ask their midfielders to play frequently from the inside to the wide areas, as their chances come from there.

Often, rival teams play against Midtjylland in a mid or low block that closes down the lines for them to try to slow down their frenetic rhythm, as Capellas’ team likes to be frenetic and direct when in possession. Emiliano likes to play with his head up, and when this situation doesn’t exist in matches, he finds spaces to break the lines, he does it quite well, with perfect timing and with flat-fast balls to his forwards.

Playing against Aarhus in the Danish League, we can see the exact moment where he delivers a great and progressive pass through the lines, as he moved to the wings to help his teammates to get out of pressure, he sees the dead-ball and makes a brilliant one-touch-pass to the player making the run in behind. 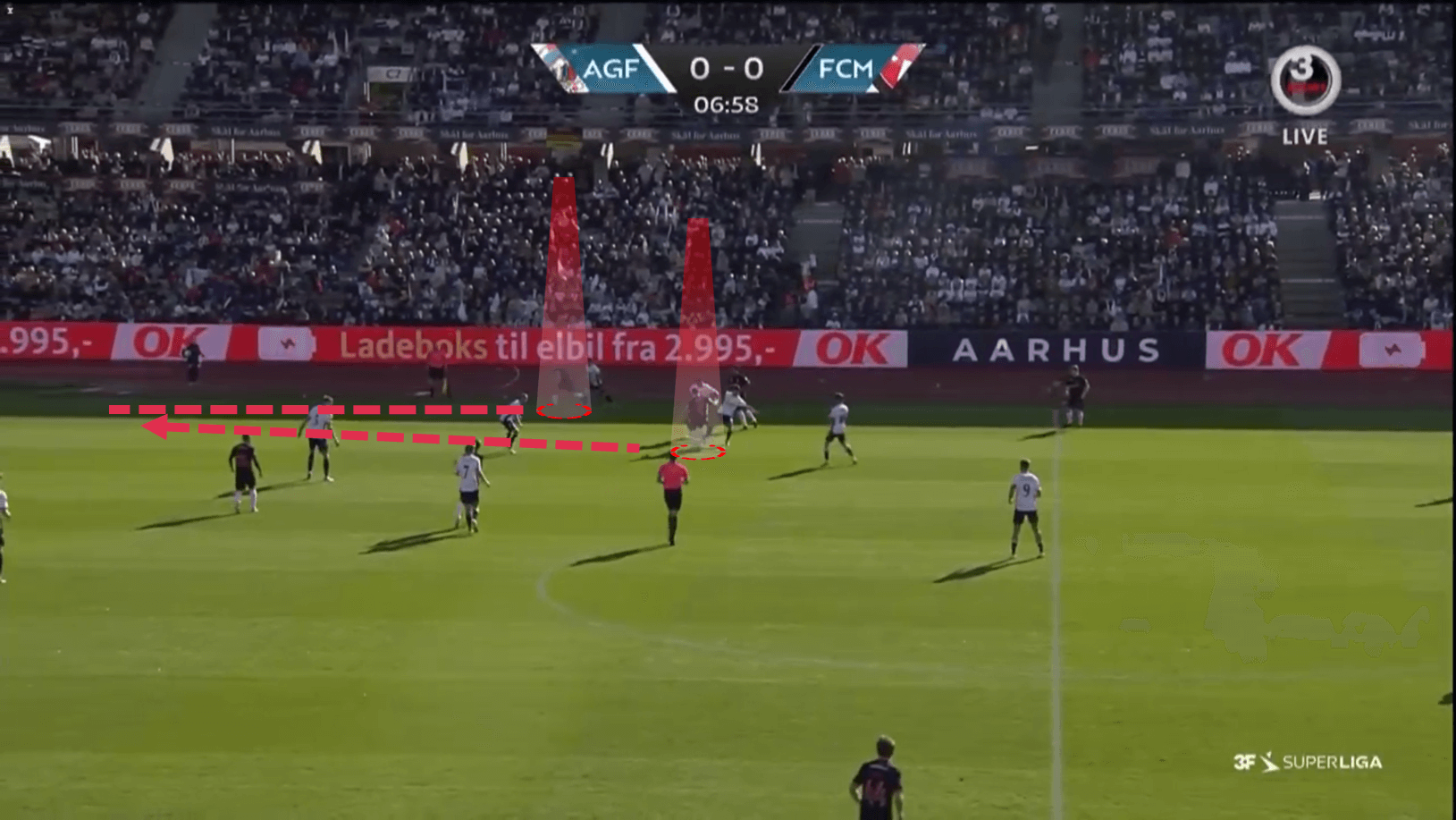 Also, after winning the ball back, he tends to carry the ball and play it fast to find the opposition in a defensive transition.

He possesses a sensitive ball hit, that helps him to find the receiver accurately. Nevertheless, when his team has to restart and think again about how to beat those rigid blocks, he’s clever to play it side-to-side and maintain possession.

Teams sometimes also set against them a high block, that doesn’t allow them to comfortably play their game. Emiliano likes to drop deep and join the back four, mostly in the middle of the centre-backs to form a back-three and push full-backs forward. This creates numerical overloads to beat the press. 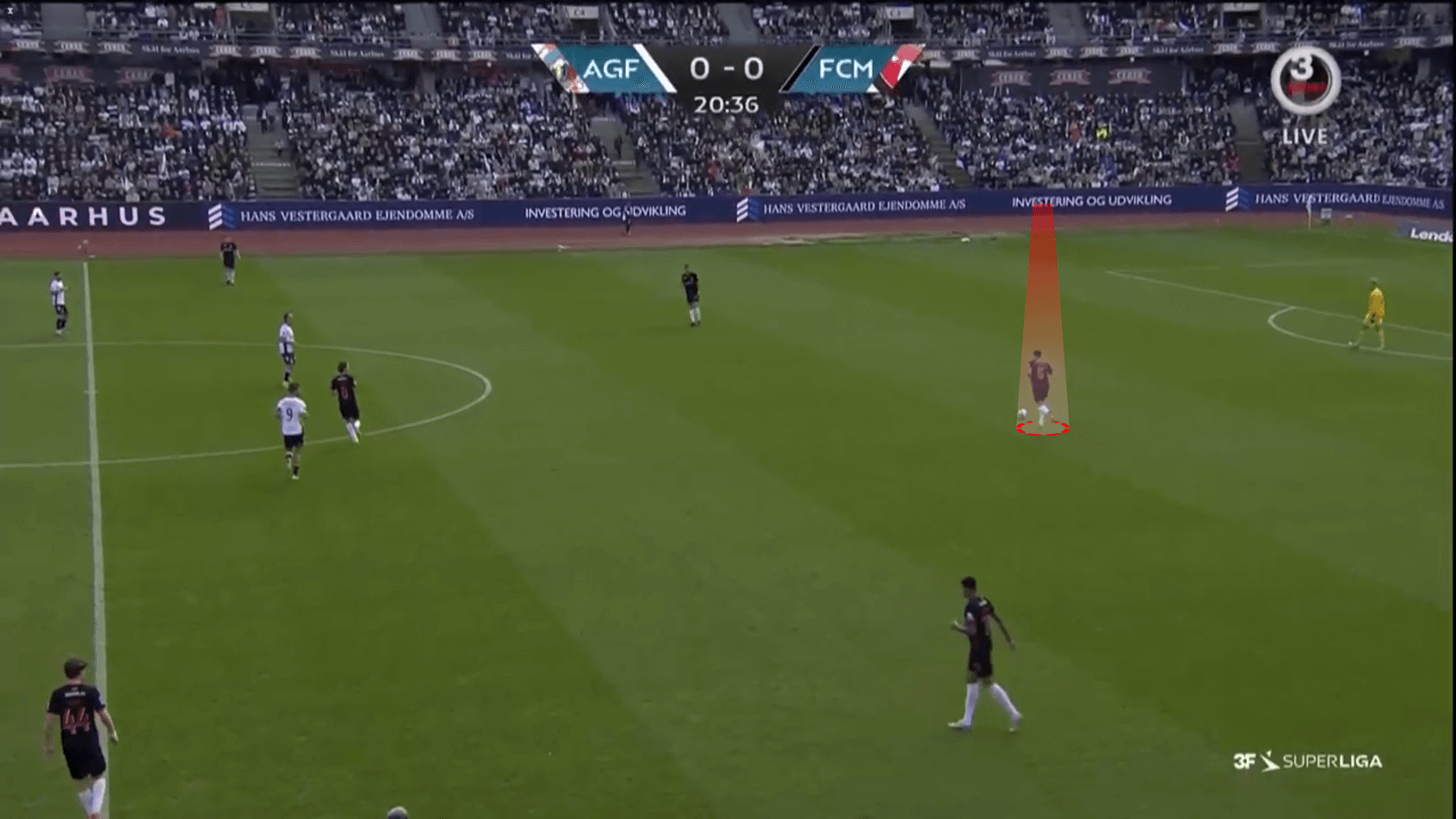 We can see the way he beats the press when joining the back-four in the following example, as Midtjylland full-backs positioned themselves high in the wide areas, and Emiliano sees the option to progress through there, as the opposition team left several spaces in this zone. 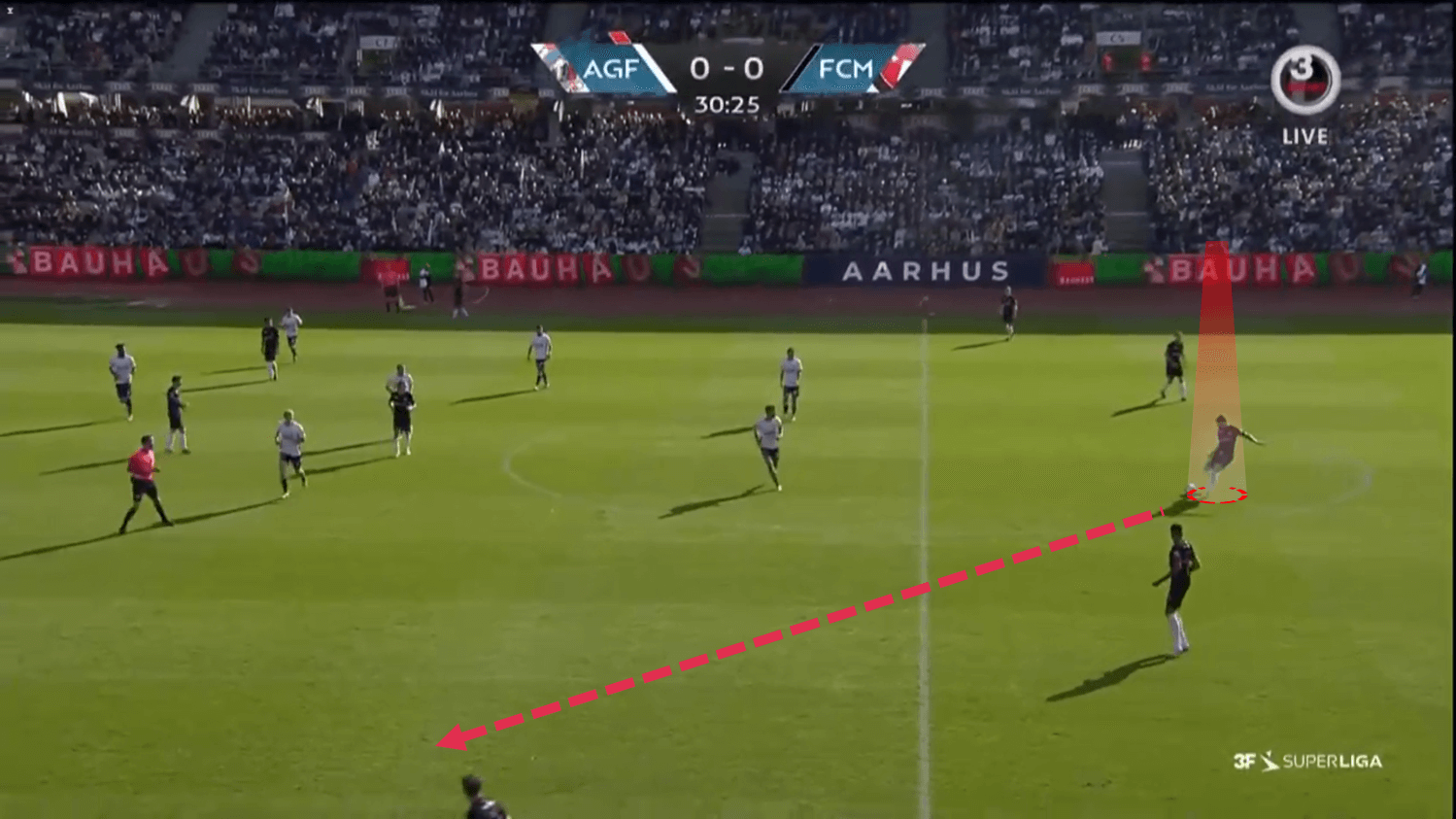 Mainly his movements after passing the ball are quite good and offer his teammates different angles in little seconds. The Uruguayan in some stages of the game releases the ball and moves forward to be found between the lines. This is to not turn the build-up a bit monotonous, where he has a static position and he can not rotate from there.

When playing up in the final third, he has the ability to connect with the strikers or advanced players between the lines, to then create positional advantages where the receiver can take that pass from Emiliano to then take a shot, or find an assist. 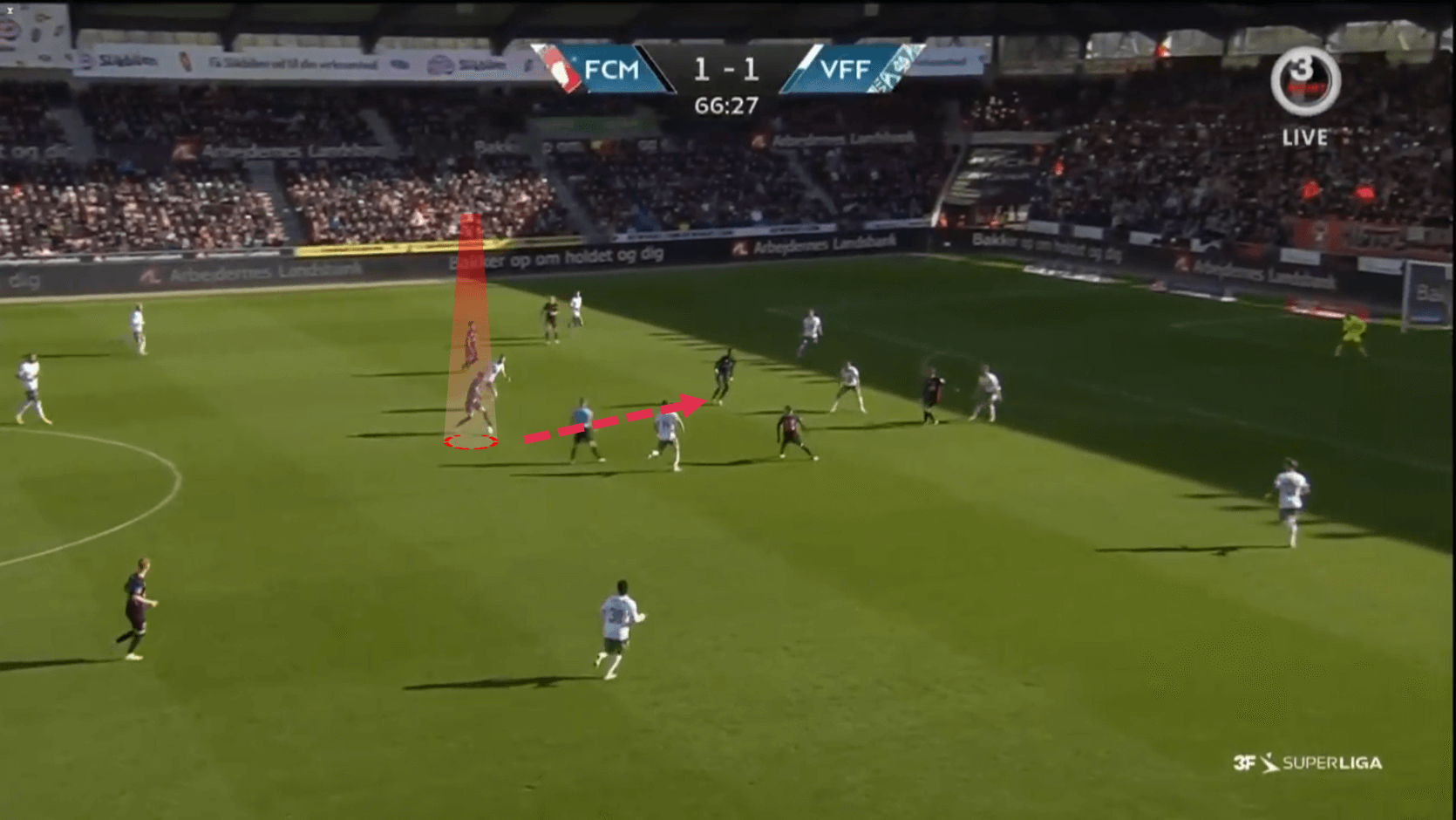 From taking long balls, he’s irregular, and he has the sense of when he has to do it. Sometimes he’s accurate but normally he over-powers them or does not take it with enough power.

His ball control is that good and it can be seen in the last game against Feyenoord in the UEFA Europa League, where he scored an amazing goal from long-distance, after proactively stealing the ball and taking immediately, one second later, a powerful shot to the bottom-right corner of the goalkeeper. In the defensive phase of the game, Martínez is a bright player and a key one for Midtjylland. Conquering the ‘6’ role is not only helping with progression, baiting the press and beating them consequently but also offering coverage in front of the back four, and he does this quite good.

His positioning is one of the best aspects of the 23-year-old, and he has a great reading of the game so he knows where to step defensively, and who he has to mark. He’s a proactive defender that likes to jump out of his line to cut passes or tackle players. His timing and capacity to take down rivals are great, as he likes to fight shoulder-to-shoulder and his strong legs and waist that help him to be an excellent ball-winner.

In the example below, we can see Emiliano Martínez waiting for the rival to carry the ball through the middle, to then jump off his line to tackle him. 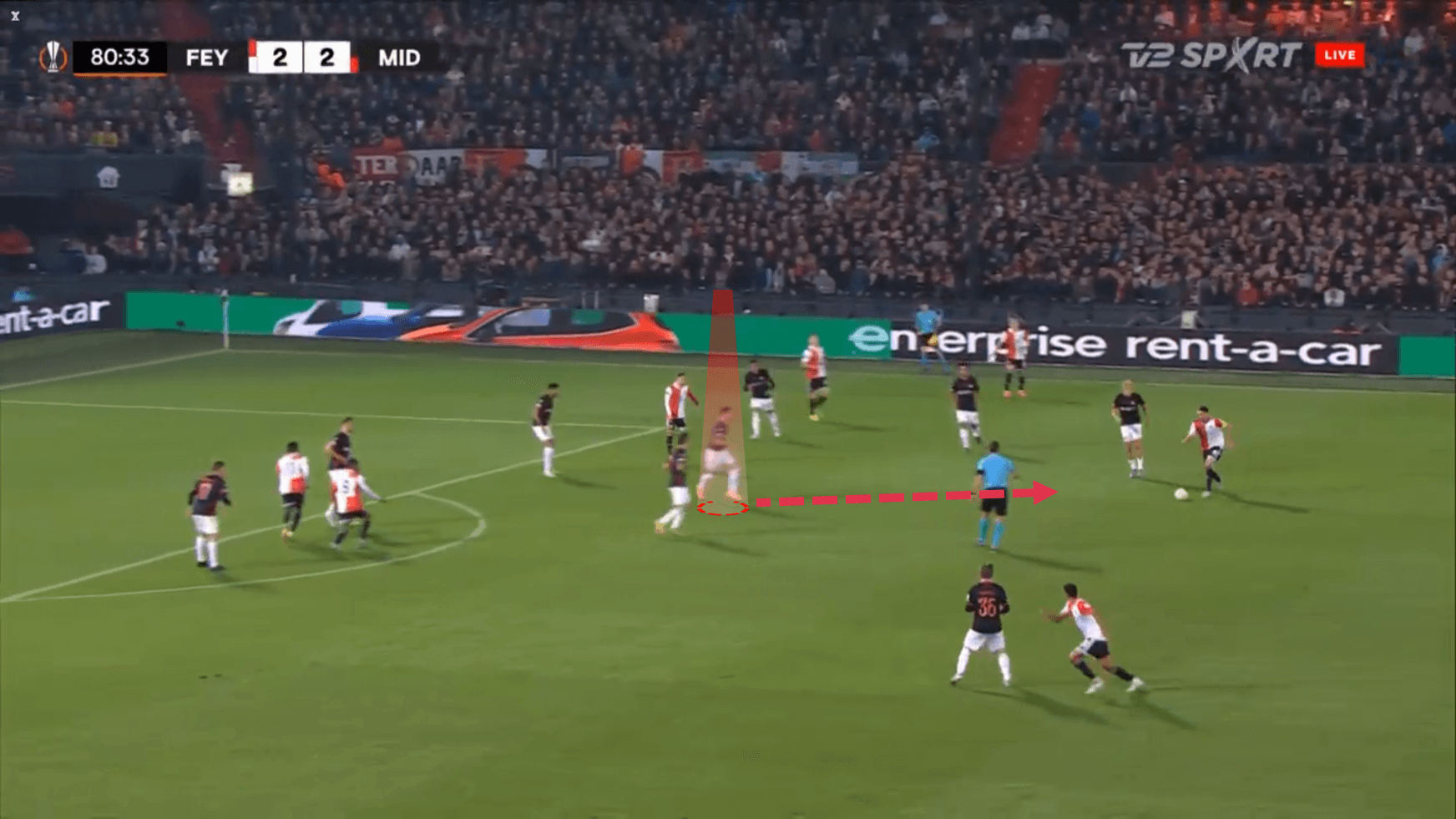 In defensive transitions he makes recovery runs with big intensity and a desire to win. He’s very rigorous as he likes to wait for the following action of the rival to see if he makes a turnover or holds back to make confusion and then pulls the trigger to press. His pressing is a very suffocating one, as we can see in the picture below, where Emiliano took the decision to press higher and leave his position. 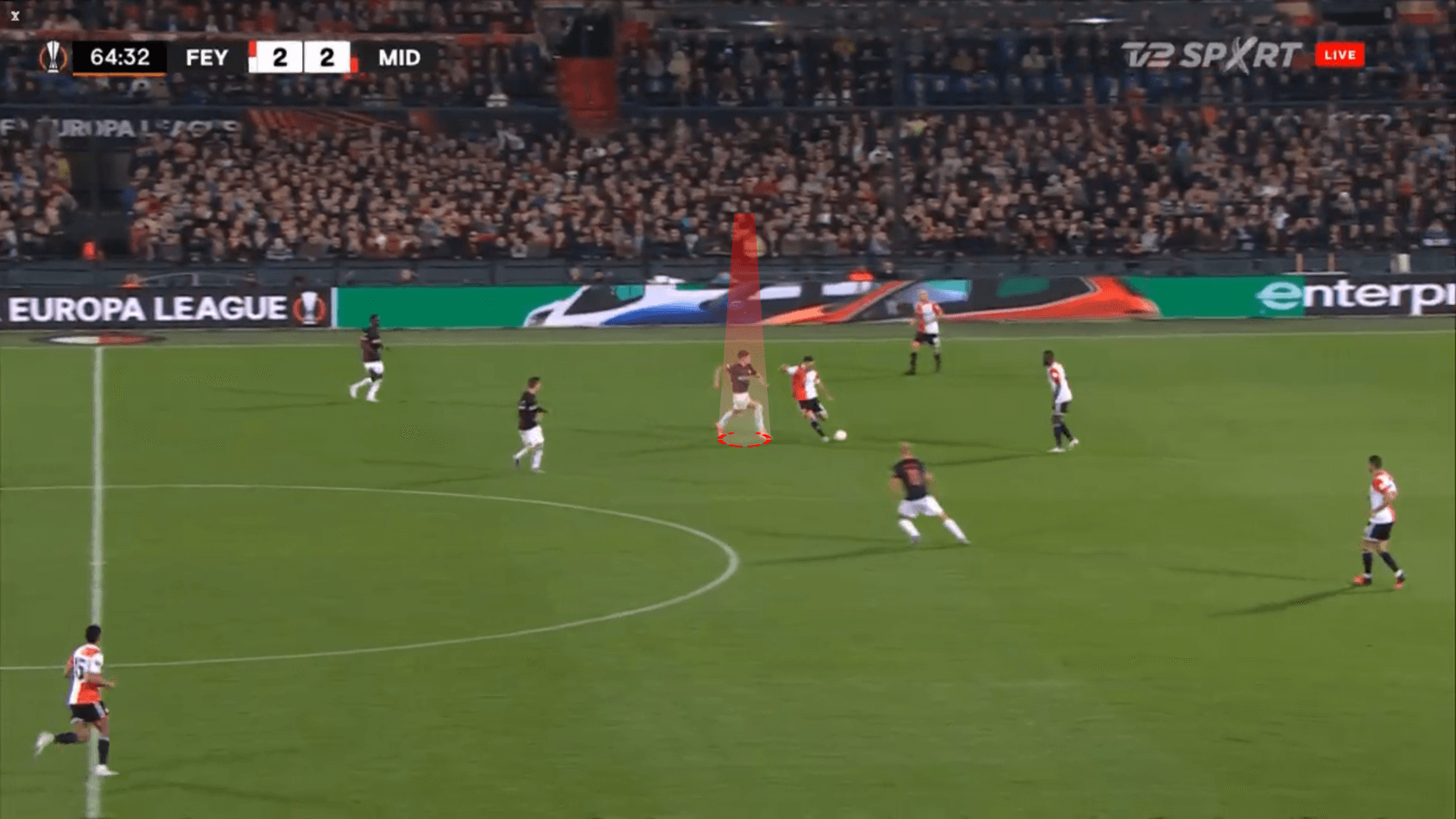 As he’s a tall player, he gives a helping hand to Midtjylland with his heading, inside the box and outside the box, where you can see Emiliano intercepting long balls from the back, or high-passes that he likes to clear out with his head.

Emiliano Martínez is a fantastic all-round player that offers progression, ball safety, calmness, discipline and solutions in the defensive phase, as well as an intense attitude on the pitch. At 23 years of age, he has taken the right step to move to Danish giants, Midtjylland, a marvellous team to develop his individual qualities and his tactical understanding of the game.

If he keeps performing at this level, he could catch the eye of the top-European sides, or Capellas’ team could execute the option to-buy clause. 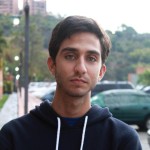 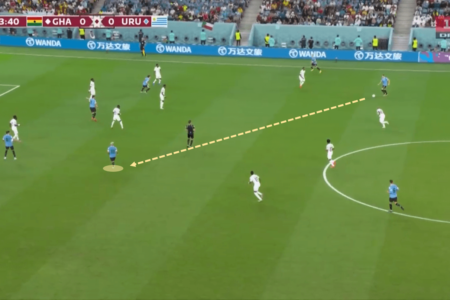 FIFA World Cup 2022: Why Giorgian de Arrascaeta’s role won the game for Uruguay despite not being enough – tactical analysis

With an eye on the decisive match of the quarterfinals in South Africa 2010, where Luis Suárez conceded a penalty […] 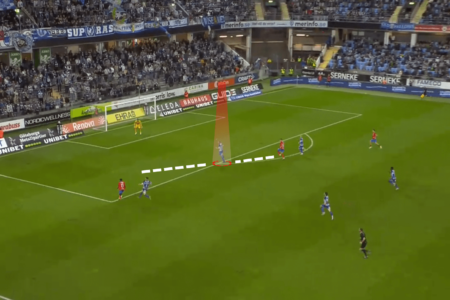 Johan Bångsbo: The towering defender from Sweden making a name for himself with IFK Göteborg – scout report

Johan Bångsbo has recently made an impact in the 2022 Allsvenskan. After a period of being sat on the bench […] 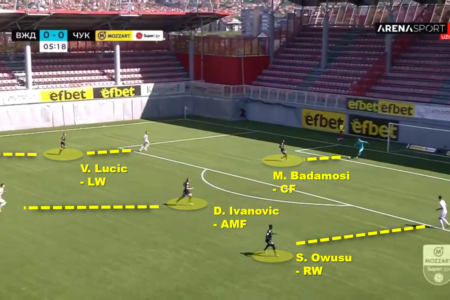 Aggressive pressing and direct football: How Čukarički are challenging for the Serbian SuperLiga title – tactical analysis

After a long period of irregular top-tier football, Čukarički was newly promoted back in 2013/14 from the second division to […]