Pierre-Emile Højbjerg is a Danish central midfielder, currently playing for his national team and in the Premier League with Tottenham Hotspur. Since moving to Southampton in 2016 Højbjerg has proven himself to be a reliable performer at this level, having played for the Saints for four years and he is now in his second season with Tottenham Hotspur. Yet, there have been recent claims that Antonio Conte doesn’t see Højbjerg in his future plans, which may well see the Danish international move on this summer at a cut-price deal. Plenty of teams playing at the highest level across Europe are likely to be interested – no doubt Jose Mourinho would be interested in taking him to Serie A with Roma.

This tactical analysis and scout report seeks to provide greater insight into Højbjerg’s strengths as a player, with this analysis showing what system and tactics’ he prefers to be employed in.

At 26 years of age, Højbjerg is only now entering the peak years of his career. Given his overall approach to the game, he is also likely a player that will age well, and it wouldn’t be surprising to see him continue to play at a high level well into his thirties. Højbjerg has most often been seen as a defensive midfielder, with his ability to break up play something that many fans of Premier League football associate with the player. However, to neglect other parts of his game is perhaps unfair, and this analysis will look to highlight some other strengths of his as well as looking at his defensive ability.

Højbjerg is able to play as a defensive midfielder and can do so as a single pivot, as well as working well in a double pivot too. He can play as an 8 as well, and whilst he might not be quite as effective in this role, he still shouldn’t be pigeon-holed as a defensive player – as he can still offer plenty going forward in more advanced positions too.

His heat-map from this season, shown below, further indicates that he generally plays in a deeper position, with the majority of his actions coming just inside his own half. But he isn’t limited to playing in just these areas, with still a significant amount of actions occurring well inside the opposition half. 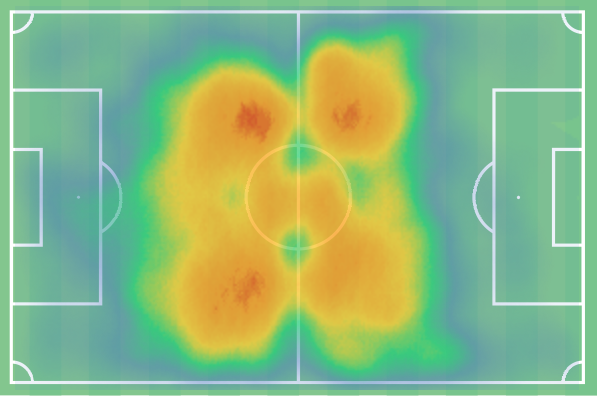 One key trait of Højbjerg’s game is his energy, and it’s unsurprising to see a vast volume of ground covered in this heat-map.

Pace of play in transition

Højbjerg is highly effective in moments of transition, and would certainly suit a side that values dominating the game in these moments – whether in attacking transition or defensive transition.

In the case of the latter, it is his energy that initially makes him stand out, but it is his overall game-reading and anticipation of transitional moments that underpins his quality.

Højbjerg has positional discipline, and whilst he can provide a presence in defensive transition, he doesn’t do so with a cavalier attitude to leaving space open around him or behind him. If he doesn’t have the support to counter-press then of course he will refrain from doing so, and is diligent in screening and protecting his back four.

However, with ample cover to do so, Højbjerg can be very aggressive in pressing a turnover of possession, particularly if he is already in a more advanced area, and so therefore is already out of position.

He has the ability to force likely losses of possession and will begin to close the distance before the loss has actually occurred. This can allow him to gain a couple of yards, but also means he is already travelling at top speed as the opponent wins the ball. He can quickly engage the ball-winner, but also has a knack for making early challenges, or pouncing on loose balls before the opposition has had a chance to secure possession. 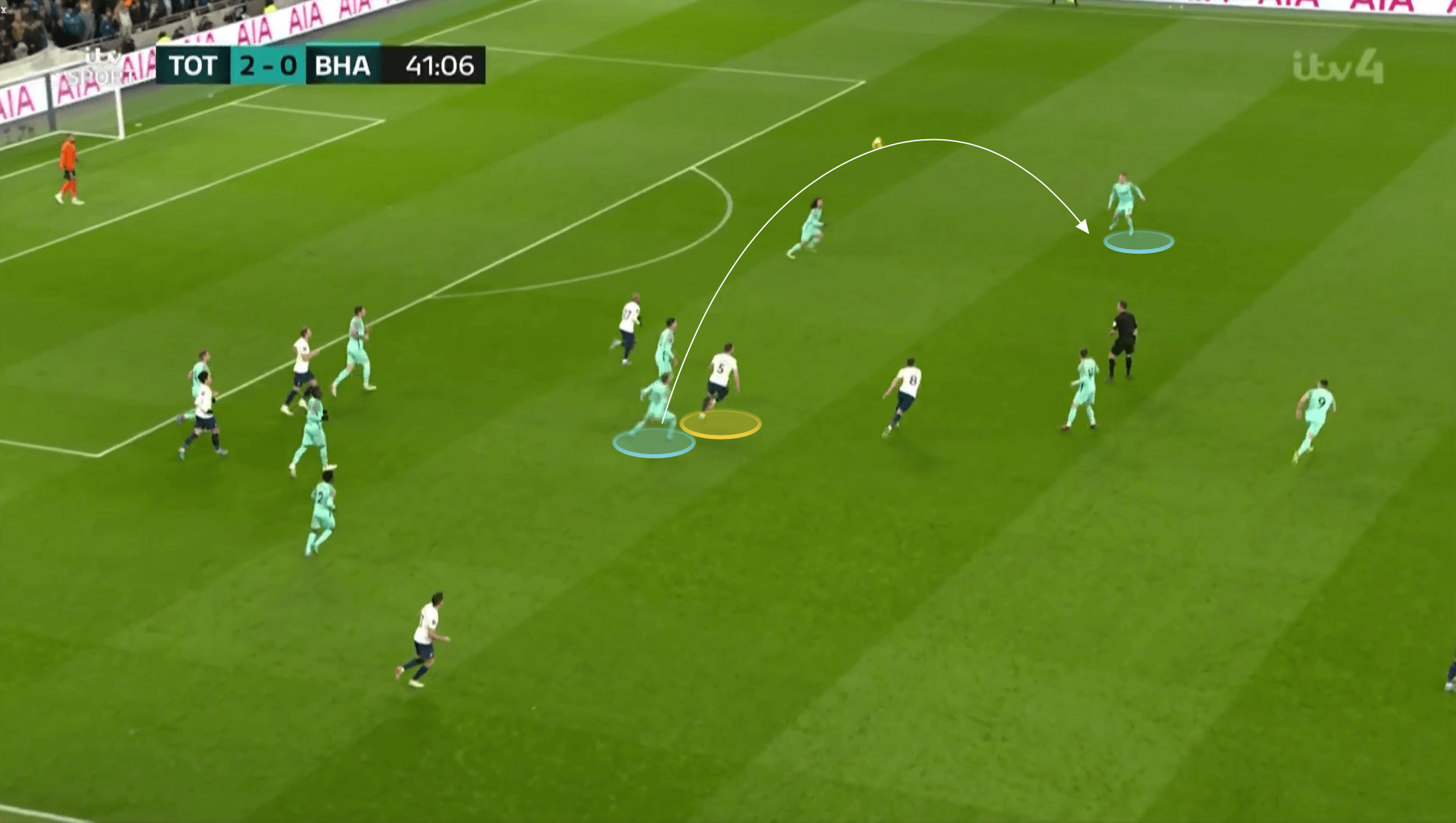 The example shown below shows him quickly covering space across the pitch before Brighton can secure possession, cutting out the pass and preventing Brighton from being able to orchestrate any kind of swift counter-attack. 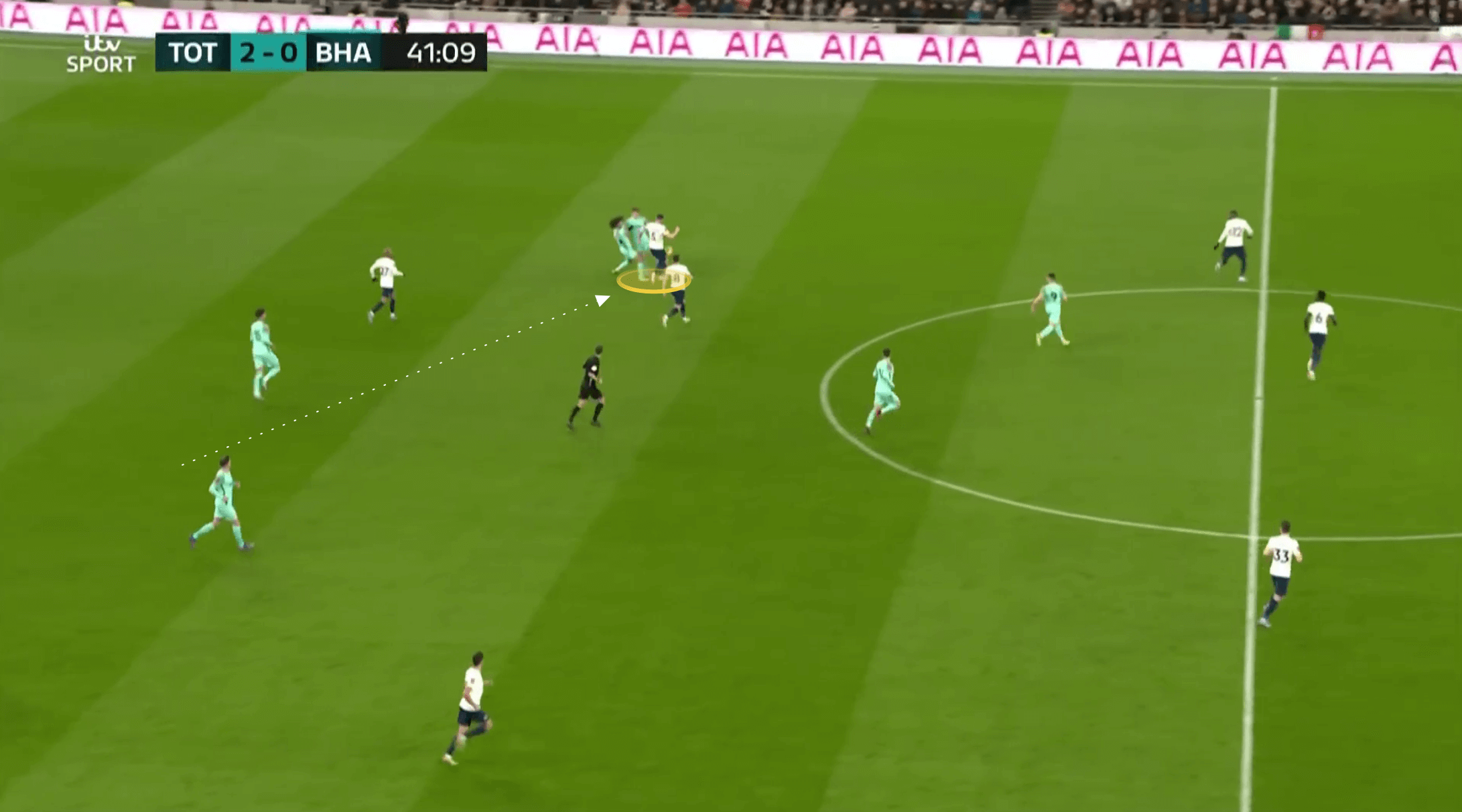 He is also highly active in attacking transition and is very positive in this moment also.

Højbjerg does an excellent job of tying possession together in general, regardless of whether this is in moments of transition or in more developed attacking phases.

From his central position, and often in a deeper area, he is frequently available to facilitate the circling of possession.

He scans before getting on the ball, as we can see him do so in the following image, and his initial reaction is to not just scan for pressure but to look for the most valuable forward pass option in this moment. 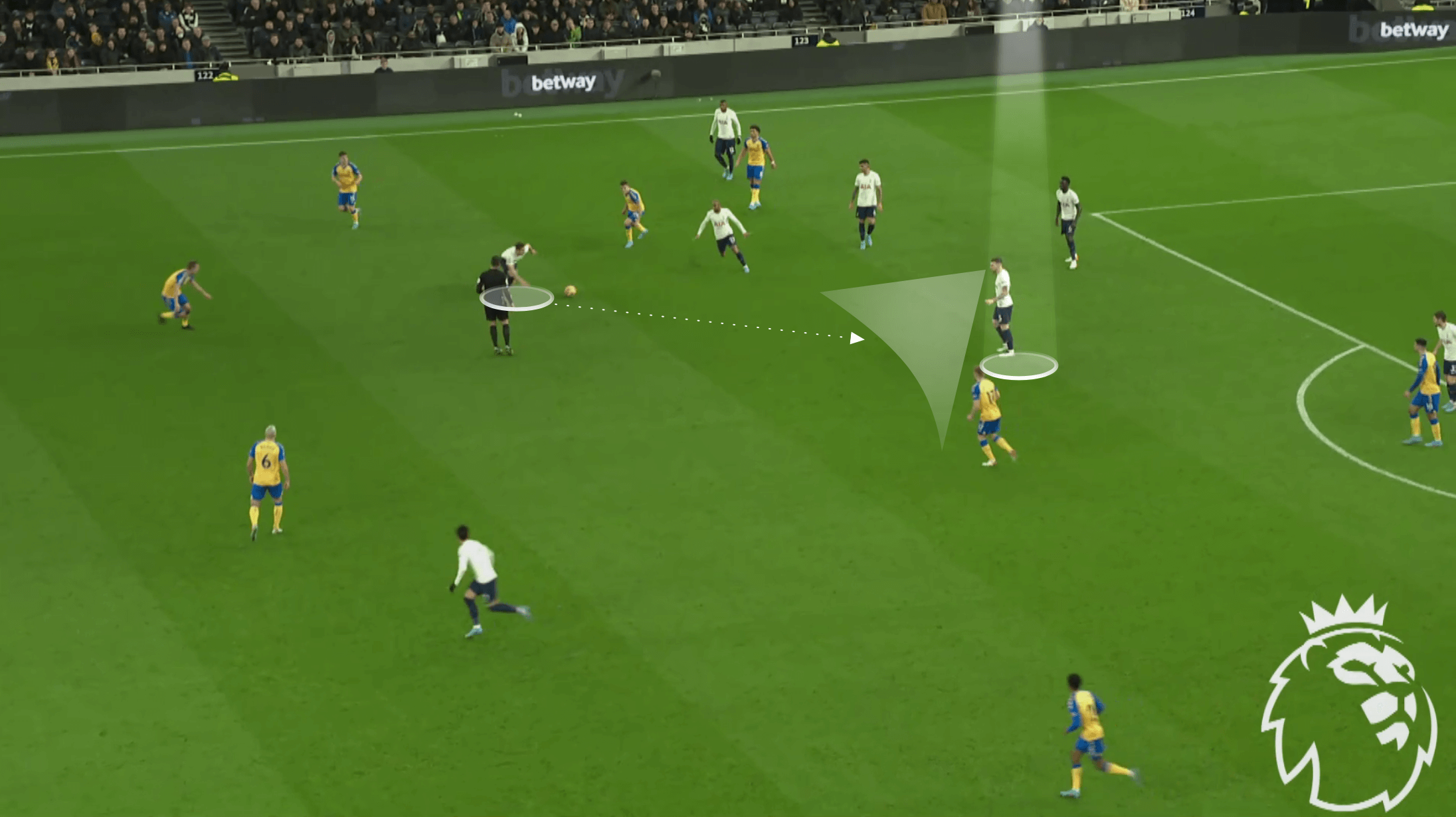 The following example comes after scanning, playing a direct pass forward into the feet of Heung-Min Son, not only getting the ball immediately away from any counter-press but also advancing the ball into an advantageous attacking position. 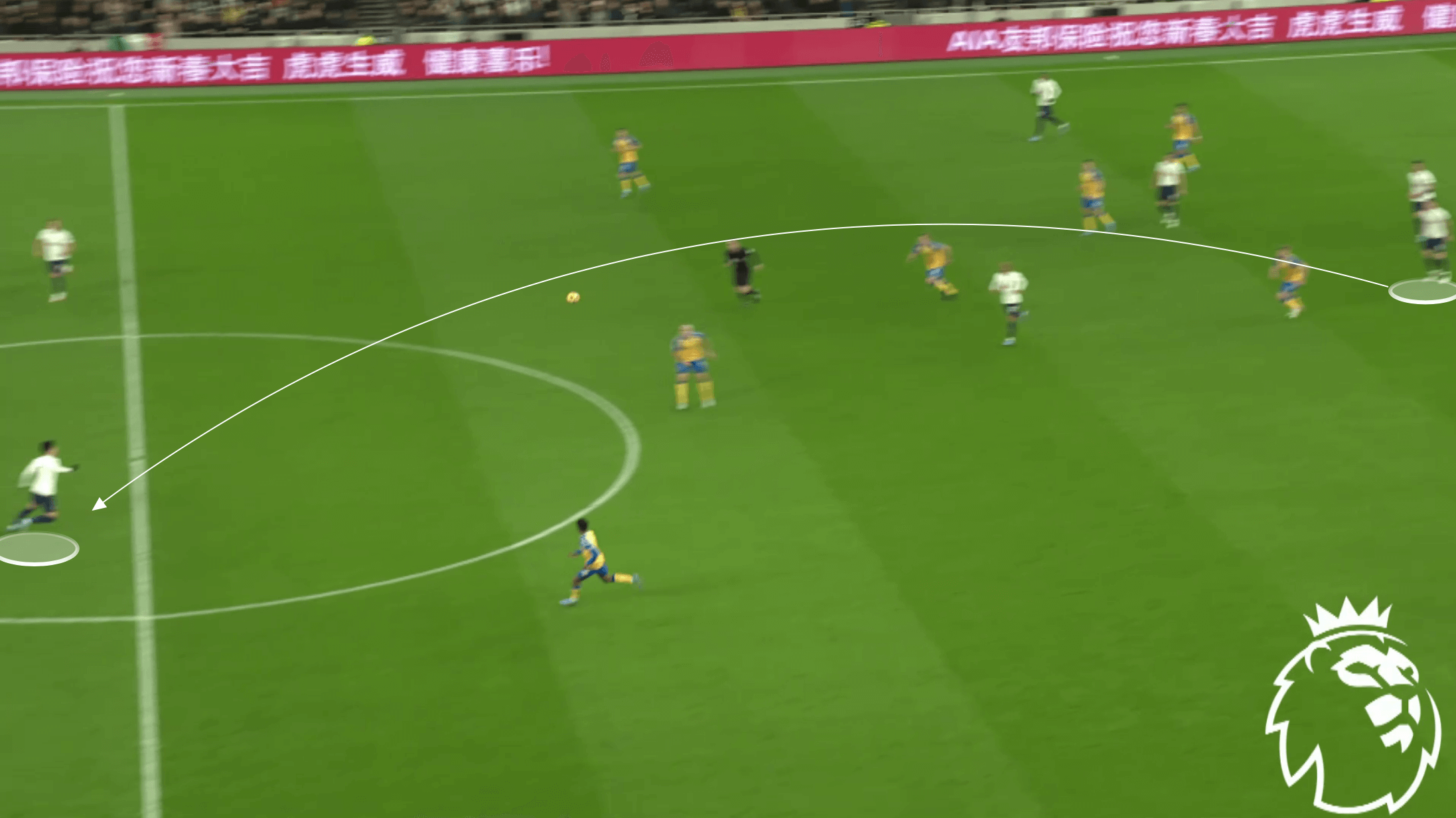 We can see a similar example in the following image, with him instinctively looking to play forward where possible after a regain of possession. Again, this time against Wolves, he releases Son once more down the line. 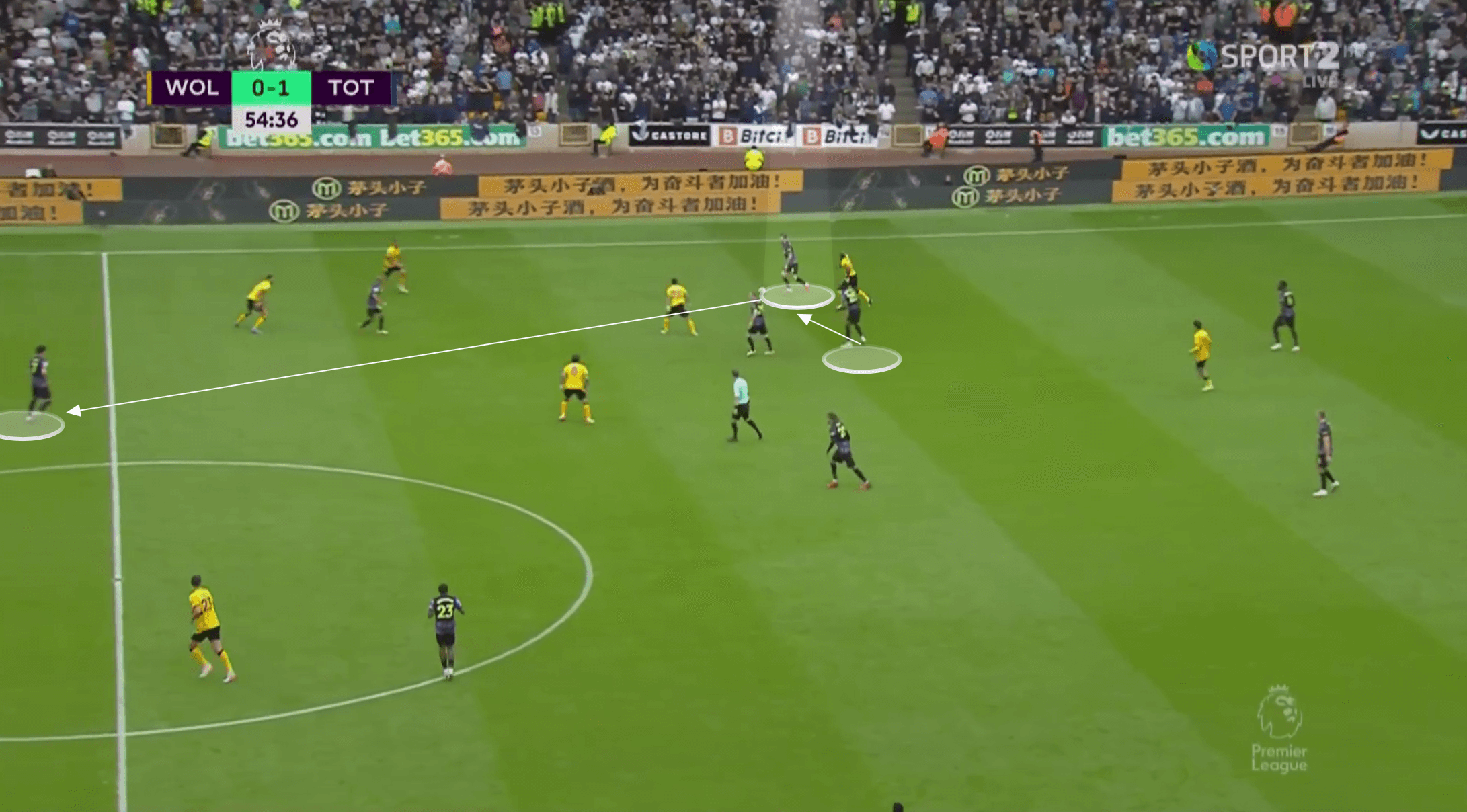 Of course, he doesn’t always play forward, and in general, his assessment of whether it is the right move to play the more expansive pass is very good for the most part. Højbjerg has no issues playing shorter passes away from pressure, simply with the aim of retaining possession rather than immediately breaking lines or playing through passes.

Linked to this previous section, Højbjerg’s overall passing quality is perhaps the most underrated aspect of his game. As mentioned already, when people mention Højbjerg, it is often to praise his ability to break up play, however, he also has clear quality when playing longer passes in particular.

He regularly strikes accurate switches of play, often hit with a low trajectory, but he is a surprisingly effective creative passer from deeper areas too. It is surprising given these qualities that Conte is rumoured to lack interest in retaining his services, given the Italian manager’s preference for a deep-lying midfielder who can anchor possession but has the range of passing to hit direct balls where necessary.

We can see him doing exactly this for Denmark in the following image, where he is in a very deep position, anchoring play, with his midfield and attackers positioned well ahead of him.

From this position he is able to launch an accurate diagonal pass to the left-flank, keeping it well away from the opposition full-back, and yet he doesn’t hang the ball. 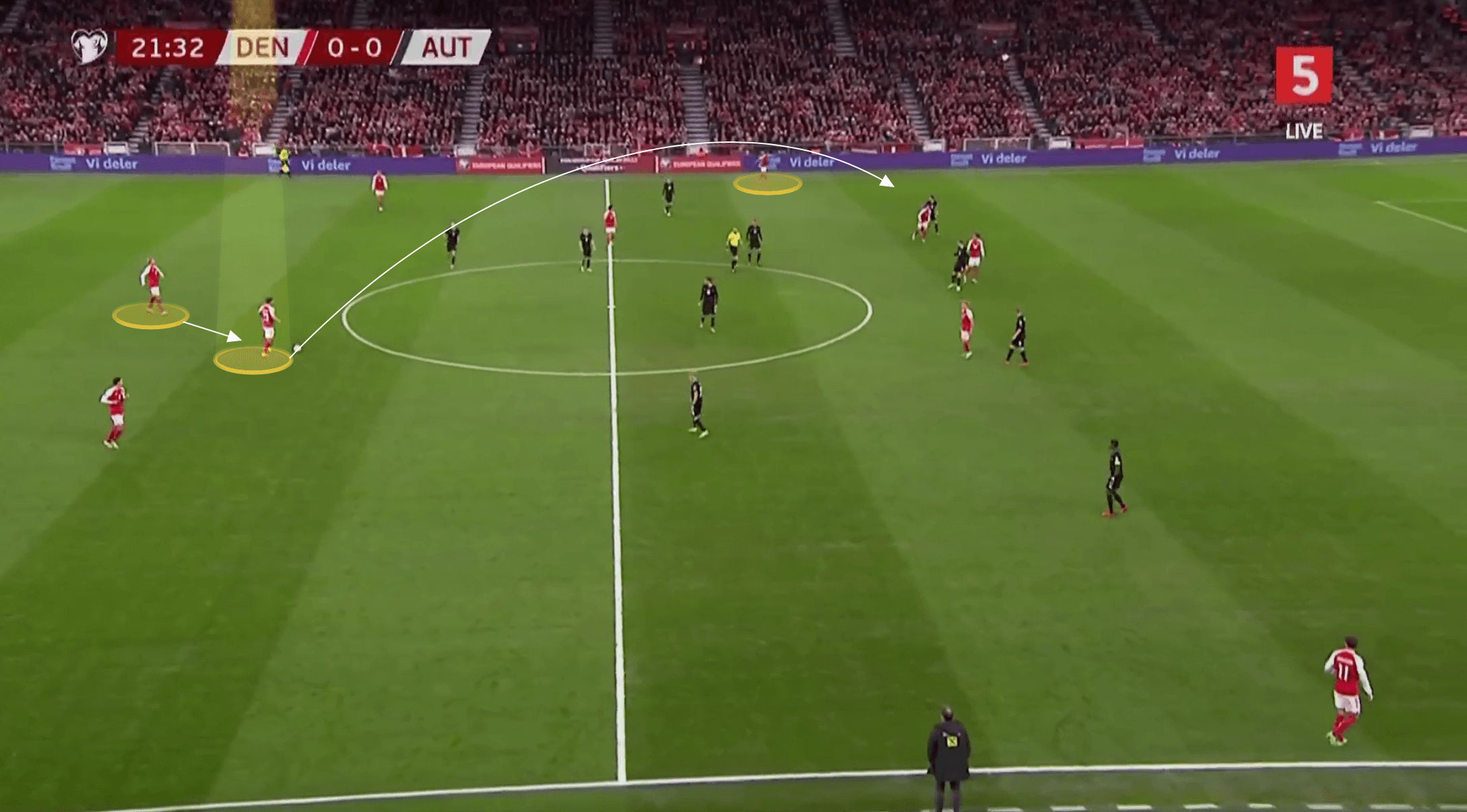 He can anchor possession in more advanced and developed possession phases as well. Below he scans before receiving once more, before then immediately lofting the pass in between the opposition left-back and centre-back for his winger to cut behind onto.

He has produced some impressive creative passes from his longer passing this season either directly making the assist or facilitating the assist with his line-breaking pass.

The first which we will highlight came from a similar type of ball to the one previously highlighted. Højbjerg shows excellent vision to hit these longer passes, but his overall timing, placement and accuracy is vital in being able to pull these off.

We can see this pass below, with him importantly angling the ball towards goal, making it difficult for the Leicester left-back to watch the ball and the man on his shoulder, and with it angling towards goal, Matt Doherty doesn’t have to check his run. 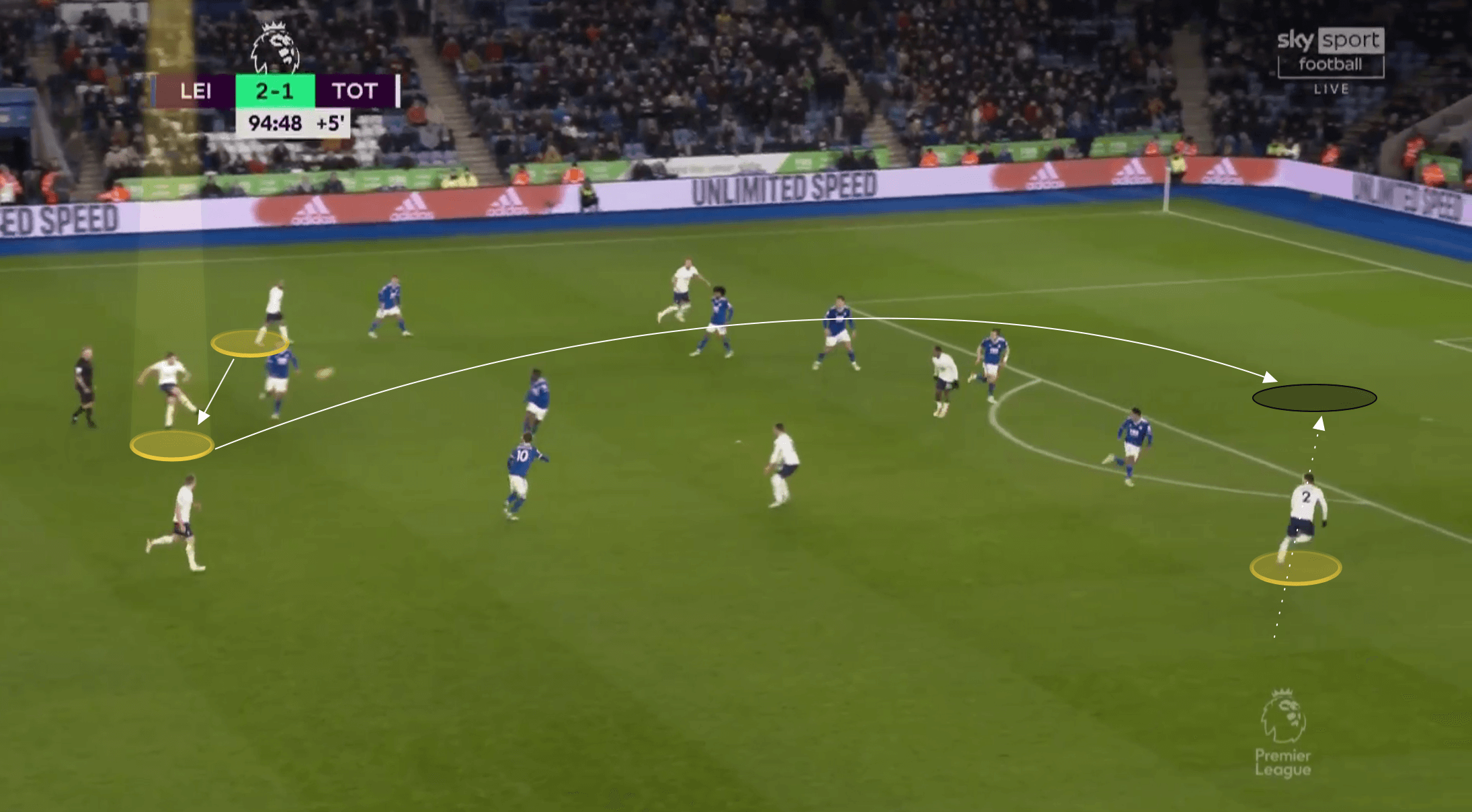 With the second pass shown, against Newcastle, he had far more time in possession and simply caressed the ball over the top of Newcastle’s defence for Harry Kane to run onto. 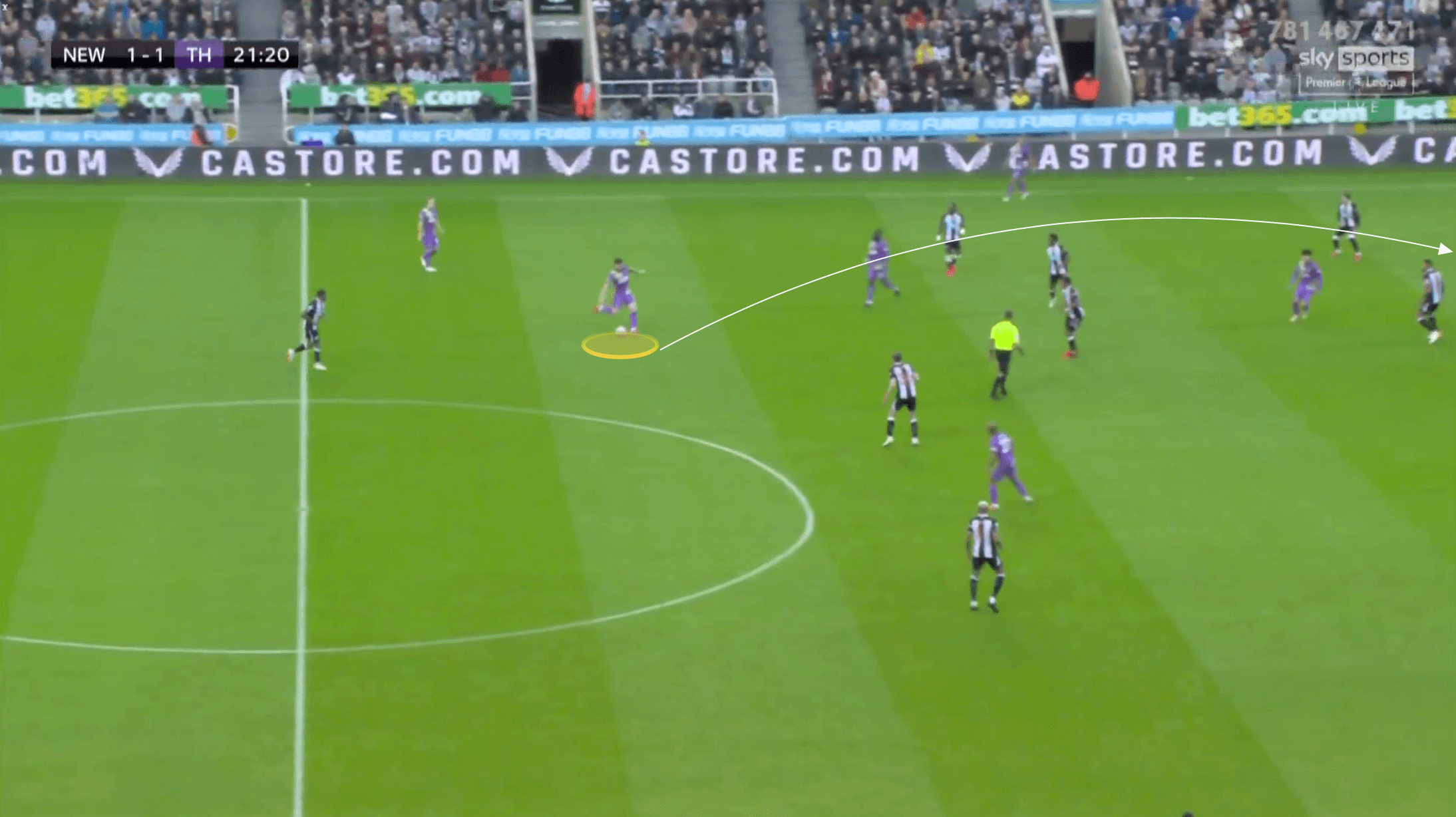 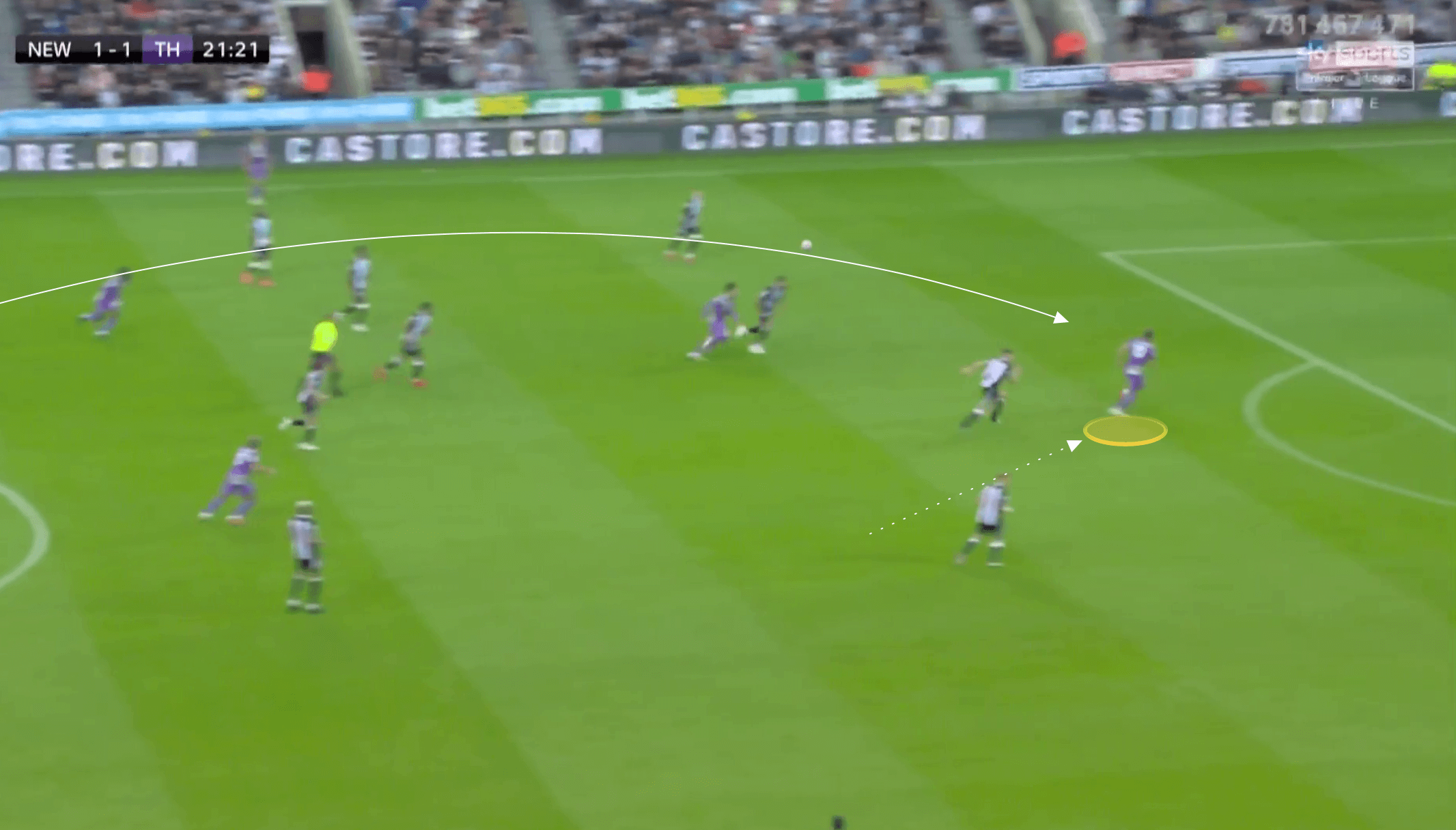 His overall quality as a defensive midfielder who can consistently break up play, whether through tackles or interceptions, is undoubtable.

Once more, his anticipation is noticeable when defending. Below we can see him anticipate the pass inside, already springing into action before it is played. He therefore can close the distance quickly, but his overall timing on his challenges is exceptional. 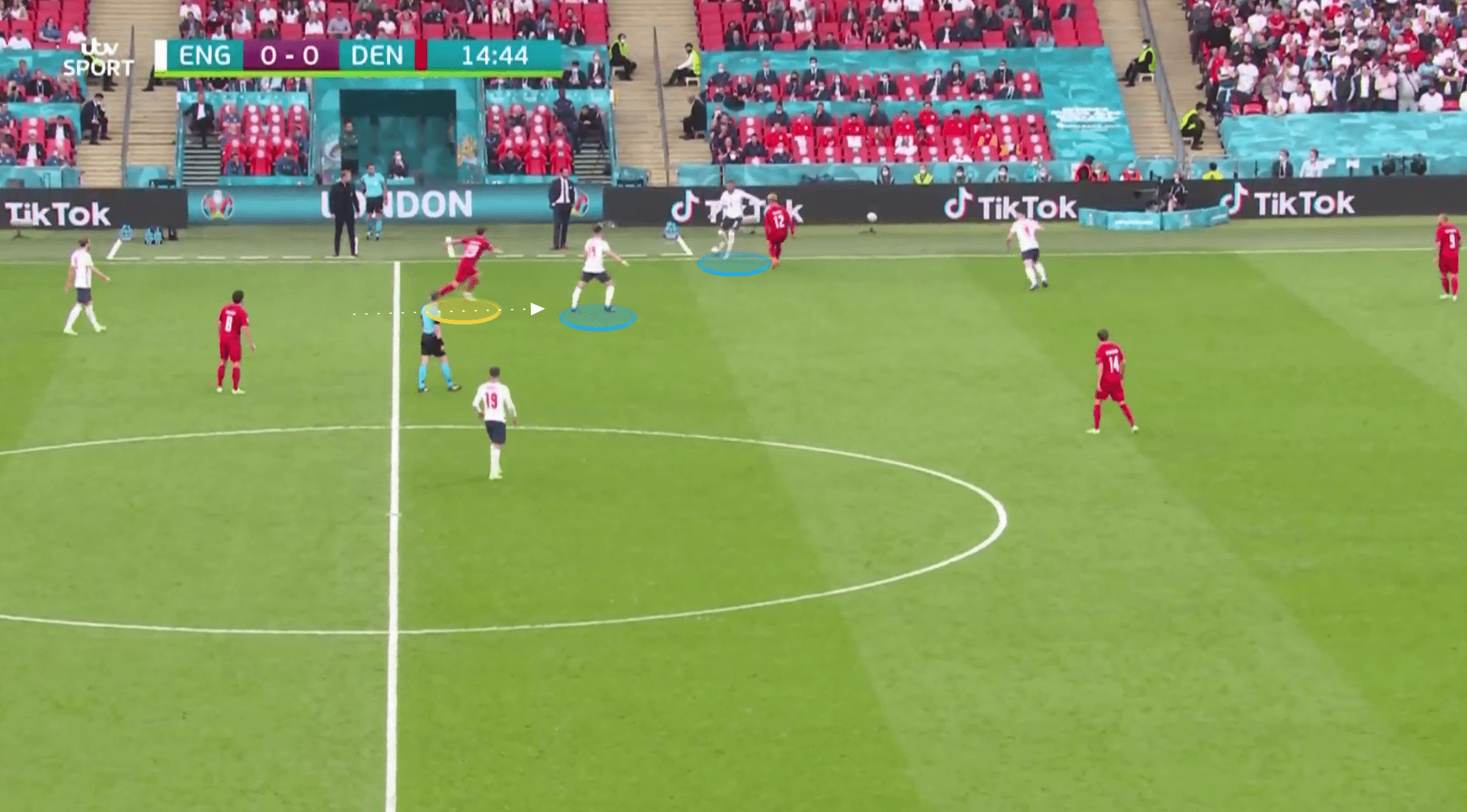 He is physical when approaching the ball, but not unfairly, and whilst he does commit a decent volume of fouls, these come from a mixture of his competitiveness, but also his experience – knowing when to thwart an attack with a tactical foul.

When tackling with force he may fully commit to the tackle, but for the most part, his timing is of consistently good quality, and his tackling is generally characterised by his ability to not lunge in carelessly, but rather to pick his moment to pluck away possession from the opponent. 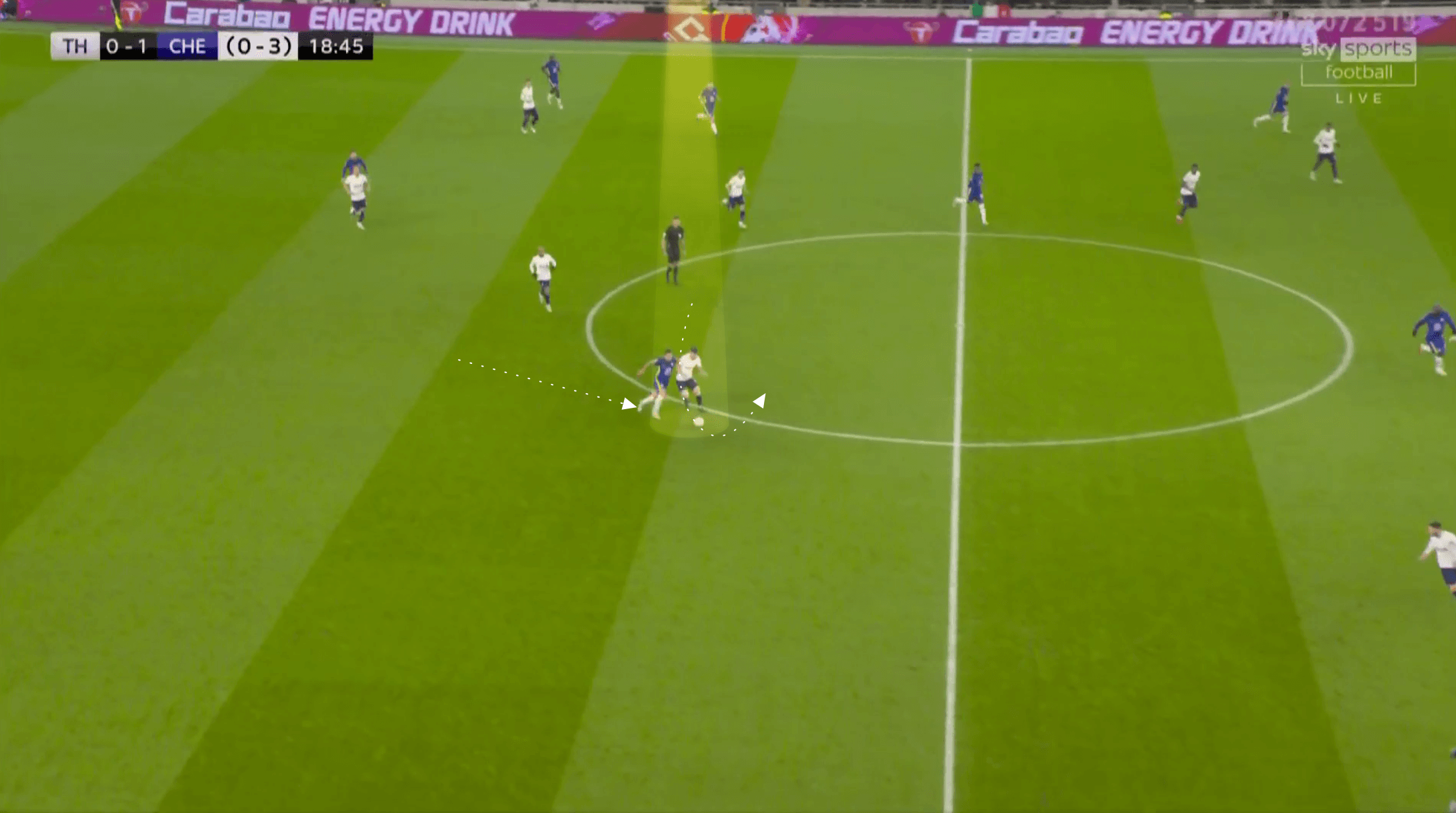 His positioning is particularly good and allows him to get into positions where he can intercept attempted through passes or direct balls into the opposition’s attack in central areas. Yes, there is anticipation once more in these moments but his overall reading, allowing him to instinctively move into these areas where he can be effective. 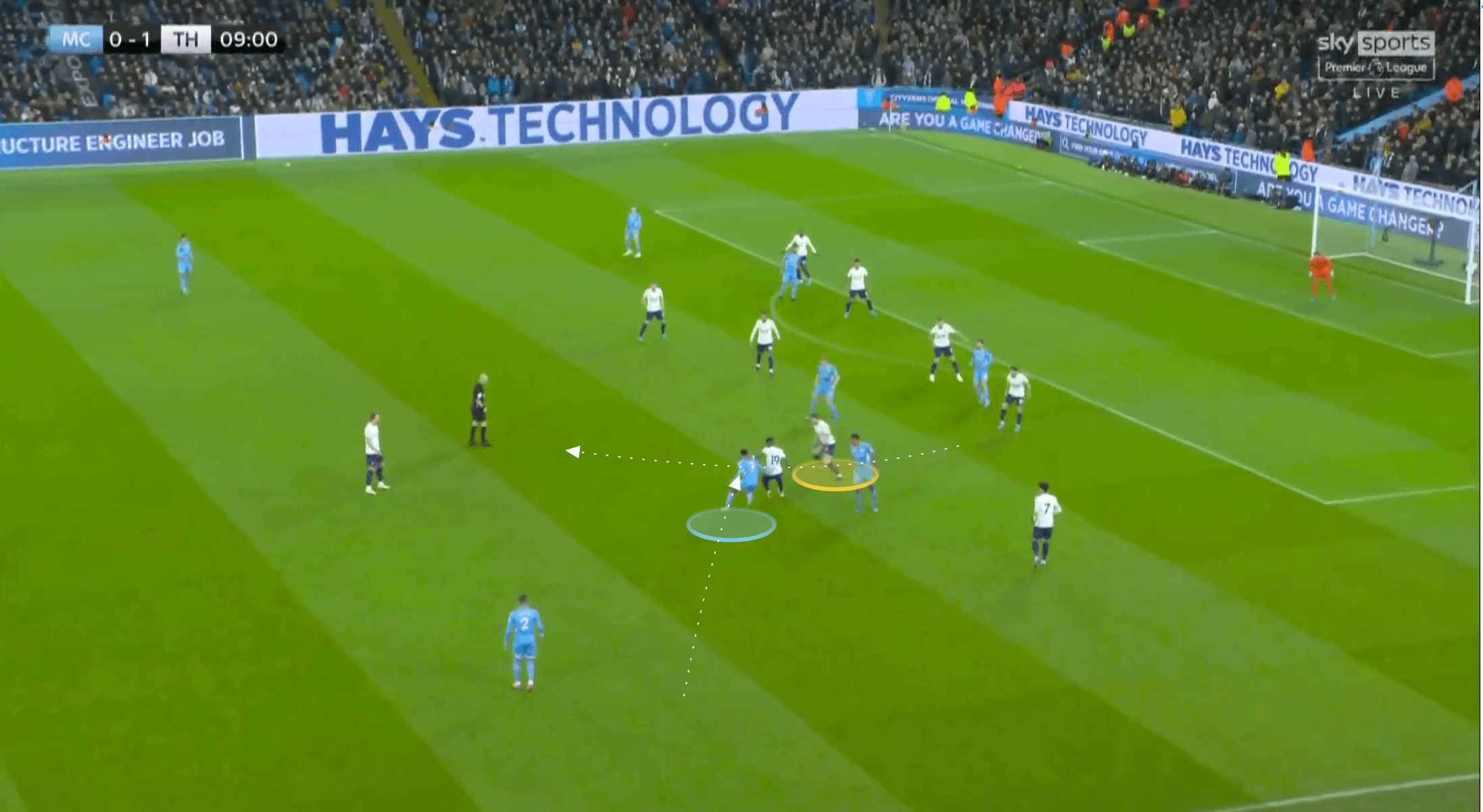 He has a quick reaction to any loose balls around this area too and can be relied upon to essentially “clean up” in front of his back four.

Højbjerg is likely to have no shortage of suitors if it is true that Tottenham are willing to let him leave – and given the media coverage of this apparent willingness he may well be available at a low price. With his age and already consistent performances at the highest level, Højbjerg would be a steal for any team looking to add defensive robustness as well as a side that values having an expansive passer in deeper areas, as well as an aggressive approach to the transition.