Italy Women faced Norway’s national team in the second group stage match of the Algarve Cup and the match ended with a 2-1 win for the Azzurre. Although this result is important for Italy, it is not too worrying for Norway given the friendly aspect of the competition. It is a yearly event hosted by the Portuguese Football Federation. Italy have already won three points against Denmark from their first match and therefore they booked a spot in the final against Sweden while Norway will be playing a match for the 3rd spot against Portugal.

In this tactical analysis article, we will look at the positives and the negatives of both teams’ performances while considering their attacking and defensive tactics extensively, as a sort of evaluation that precedes the upcoming Euro 2022.

Milena Bertolini, Italy’s head coach, preferred to start the match according to the 4-3-3 formation with Francesca Durante as a goalkeeper, Martina Lenzini, Benedetta Orsi, Elena Linari and Lisa Boattin in defence, Manuela Giugliano, Aurora Galli and Arianna Caruso in midfield with Juventus’ Cristiana Girelli playing as a striker and both Barbara Bonansea and Valentina Giacinti on the wings.

How were Italy able to win?

Despite resting a few important starting players such as Laura Giuliani and Sara Gama, Italy were still able to win while inserting some talented but less experienced players such as Durante, Orsi and Lenzini. On the other hand, Norway were also deprived of one of their most fundamental players, Caroline Graham Hansen, Barcelona’s winger, who often creates the difference in similar matches. Both teams started the match with a slow rhythm initially in order to discover each other’s plans. Norway often changed their formation when out of possession, making it a 5-4-1 formation with two solid lines of defence made up of 9 players, leaving just Ildhusøy to press high. This slowed down Italy’s attacks and ability to advance to the final third quickly and made the mission a bit complicated for them. 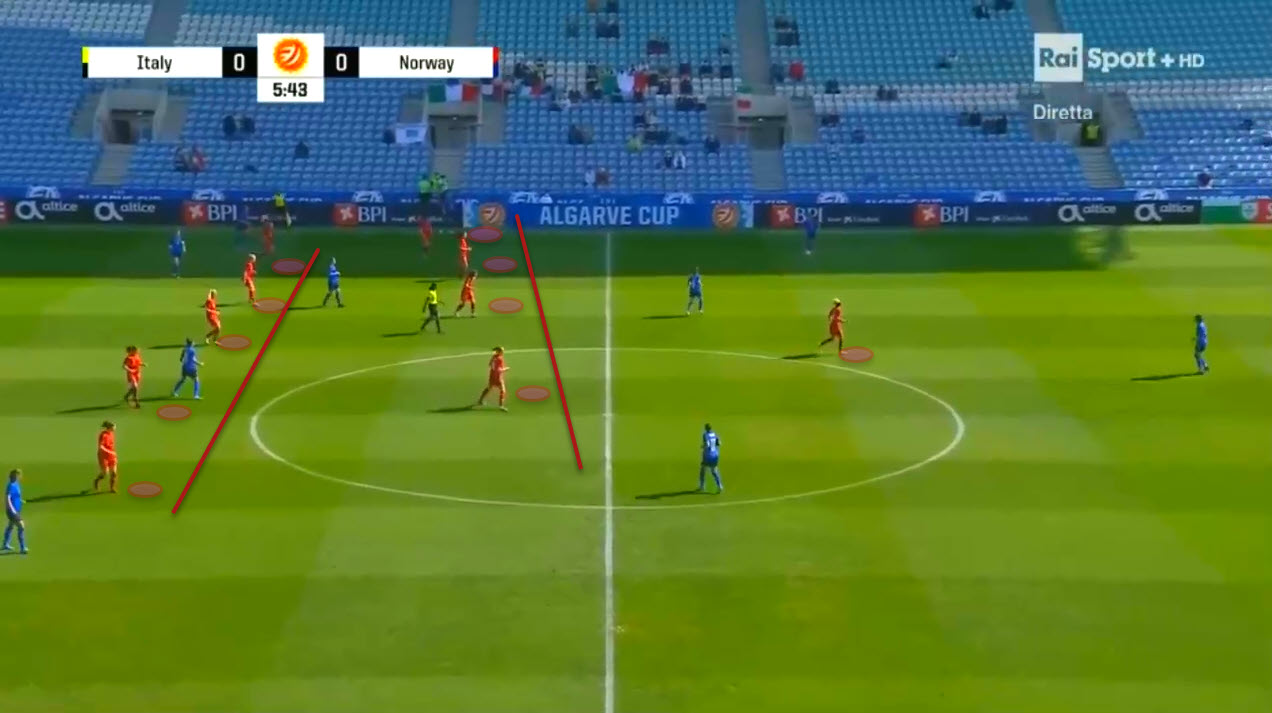 Nevertheless, it was clear that Norway were not used to playing according to this system and looked fragile as they lacked organisation on many occasions, due to this system. Italy were aware of this and tried to exploit this lack of organisation by attacking from the wings and attempting to create confusion and lead Norway’s defenders into committing errors inside the box.

Italy’s first goal therefore came early thanks to a cross towards Giacinti who was intelligent enough to prevent her marker from intercepting the ball using her back to block her movement, while at the same time attempting a powerful and accurate volley that went directly towards the net, as you can see below. 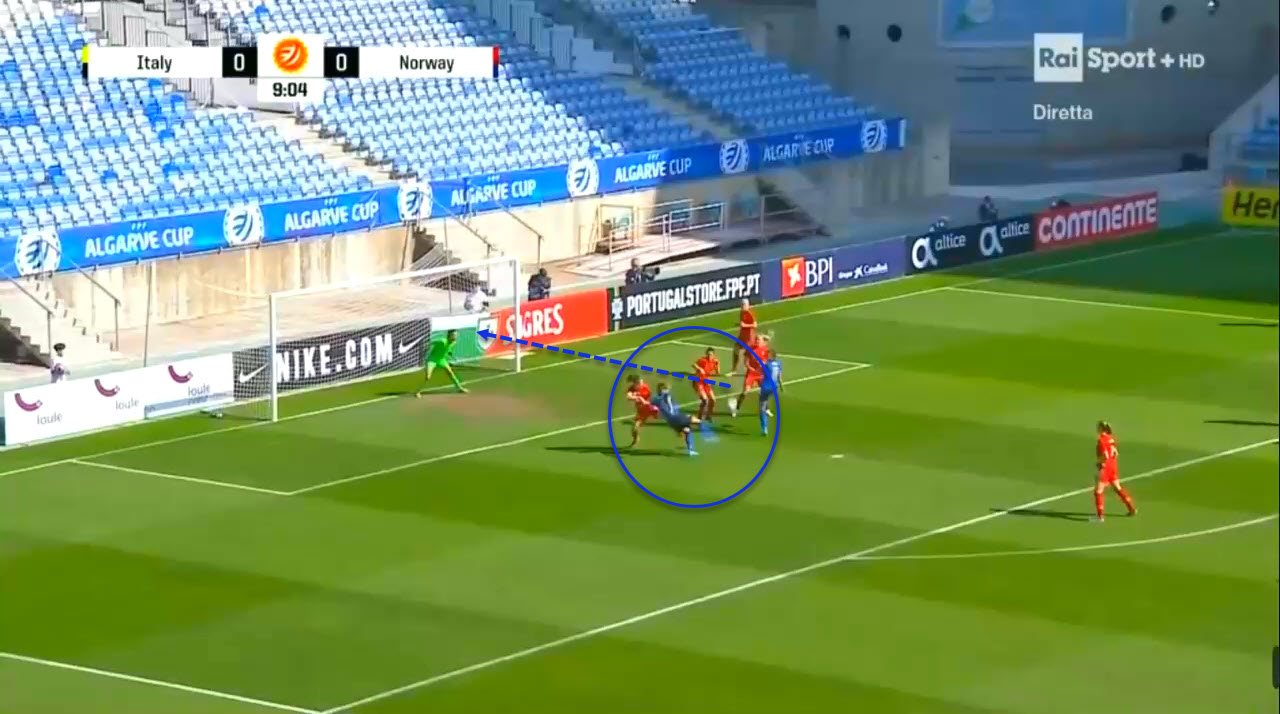 Norway’s lack of defensive organisation continued in the first half and Italy were able to add a second goal following a clear marking mistake from Norway’s defensive line. As it is shown in the following picture, Girelli was left alone between the lines and no defender went to mark her while she was asking for the ball. After receiving a pass from the right-wing, she made a back-heel pass at the back of the defensive line in the direction of Caruso who was acting like a striker. Then, the latter found herself alone in front of goal while the defenders stopped and were hoping for the referee to whistle an offside position. However, it was a regular action that Caruso ended successfully with a goal. 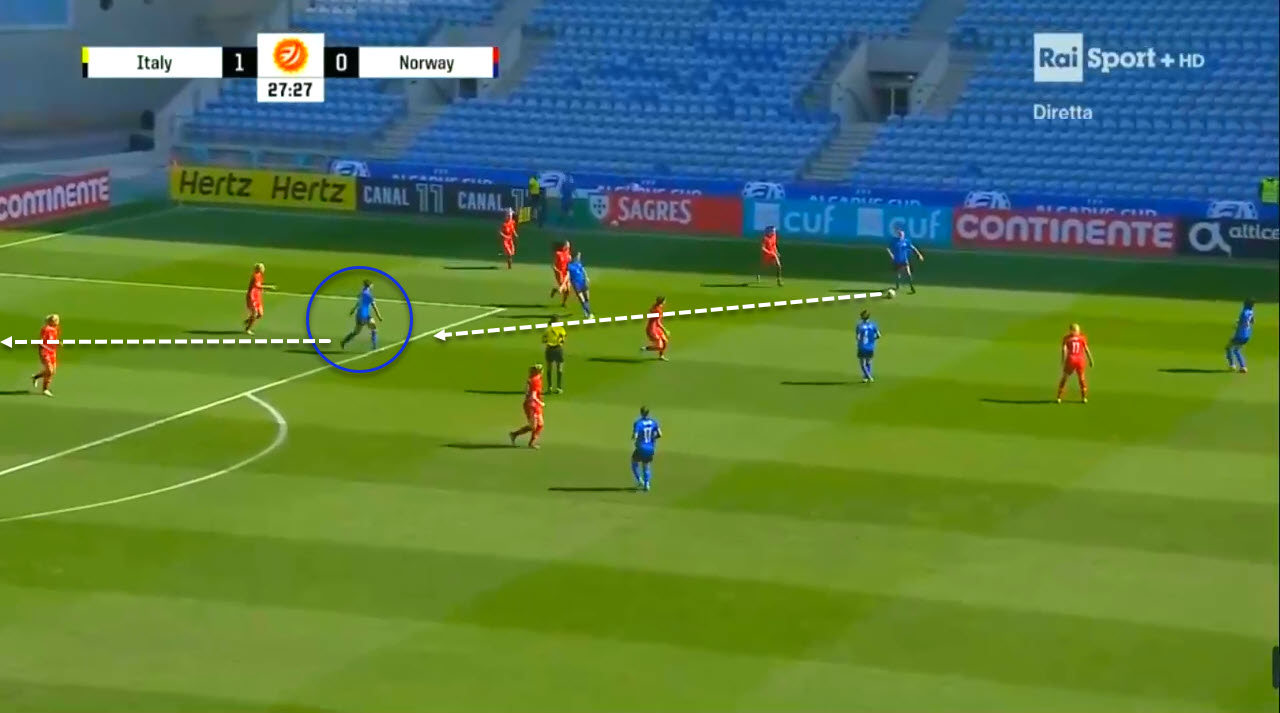 This was sufficient for Italy to win given that they defended with success during the rest of the match despite conceding a goal. Such wins would give the players additional confidence in their ability to compete and win against the top European teams at the moment, especially ahead of some very competitive matches in the Euro 2022.

Norway were unable to make concrete attacking actions during the first half and did only reach Italy’s penalty box a few times without creating real danger. Yet, they exploited the only real dangerous opportunity they had at the last minute of the first half following a well-played counter-attack. Norway were able to score their sole goal of the match at the 47th minute of the first half in an action initiated by Reiten who waited for Ildhusøy and gave her an accurate through pass despite being disturbed by two Italian players. This pass enabled Ildhusøy to escape from the two Italian defenders who were near her and run towards the goal before finishing the action with success. 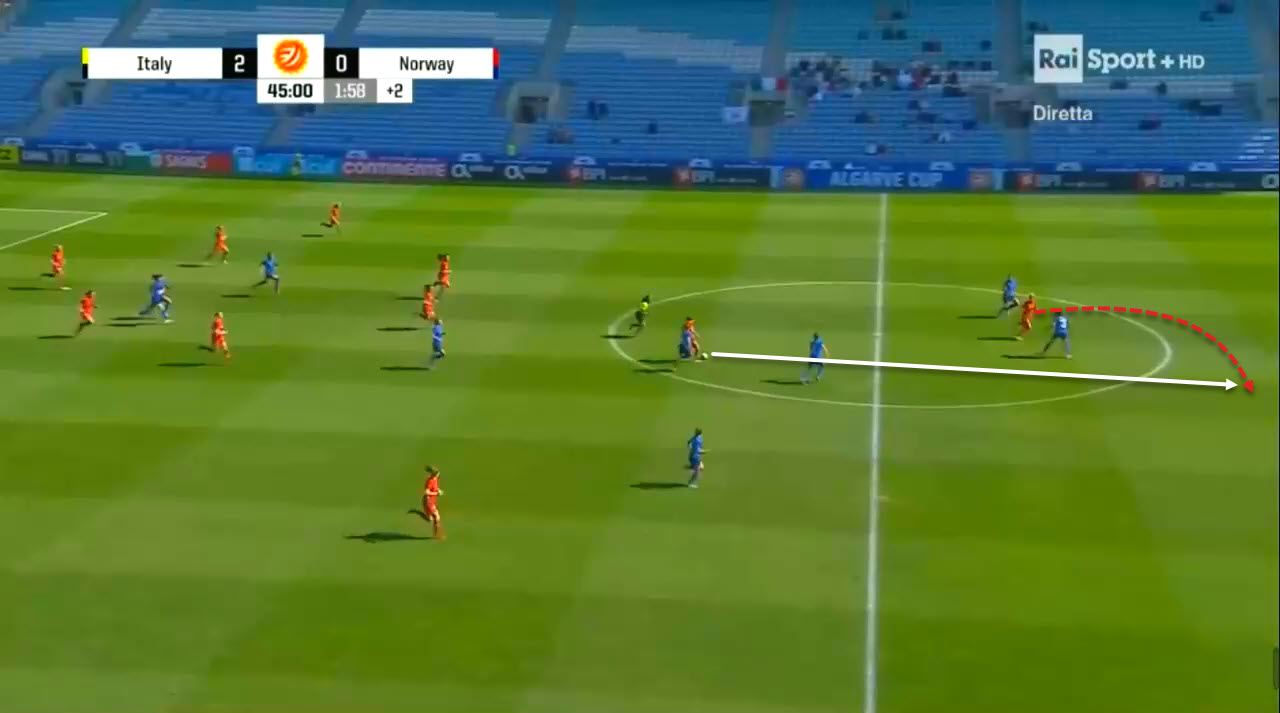 Norway created for themselves the opportunity to get back in the match and facilitate the mission for the second half. However, they weren’t well focused in the final third during the second half as they were unable to create tangible chances. Their actions were usually marked by precipitation in the final pass or shot. In the following example, Reiten received the ball in a good position and preferred to shoot from distance instead of waiting for Ildhusøy’s movement on the right wing. It is true that her shot was dangerous as Durante saved it with difficulty, nevertheless, waiting for Ildhusøy would have been better because it would have created a more suitable goalscoring chance and from a closer distance too. 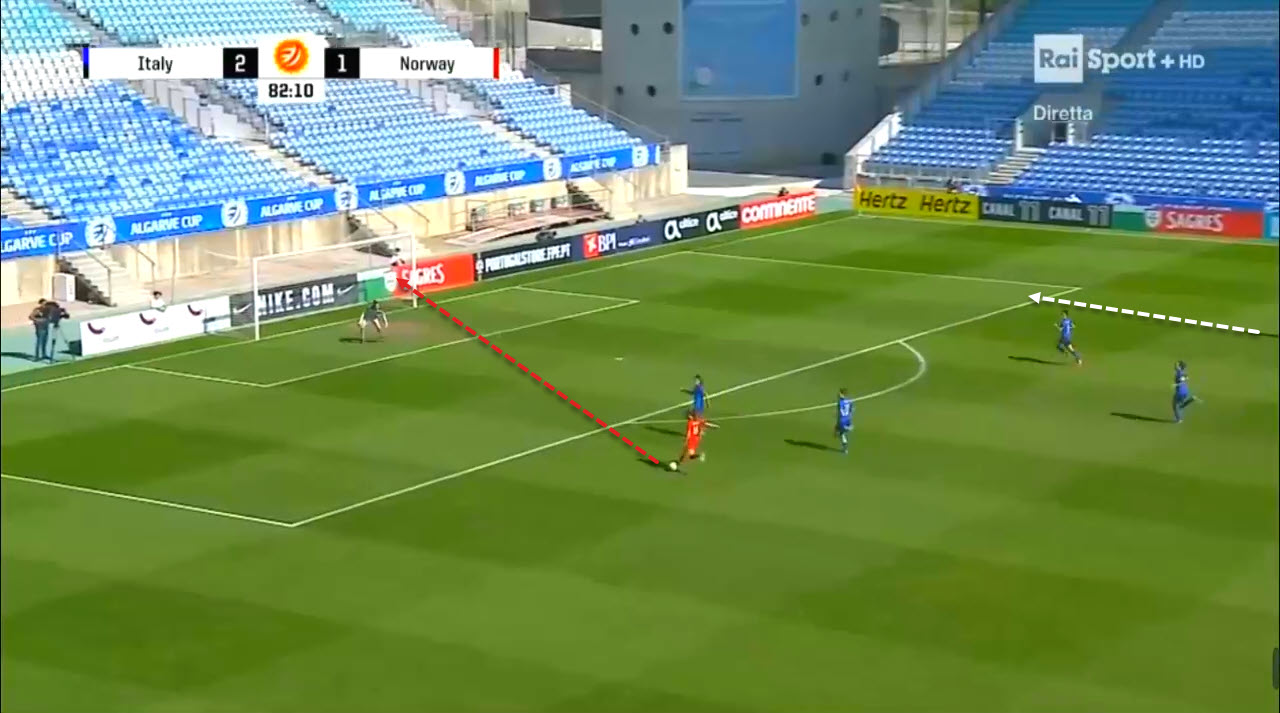 Moreover, Norway’s key passes lacked accuracy inside the final third and the next example perhaps shows the most dangerous opportunity of the match for Norway. The following Maanum pass was crucial because if it was executed accurately, it would have given Norway’s striker a perfect chance for scoring. Maanum’s pass was directed towards the feet of the defender instead of giving a through pass for Ildhusøy so that she gets an advantage over her marker and be just in front of goal with the defender at her back. The white arrow shows the needed accurate direction of the pass while the red one displays the actual pass of Maanum. 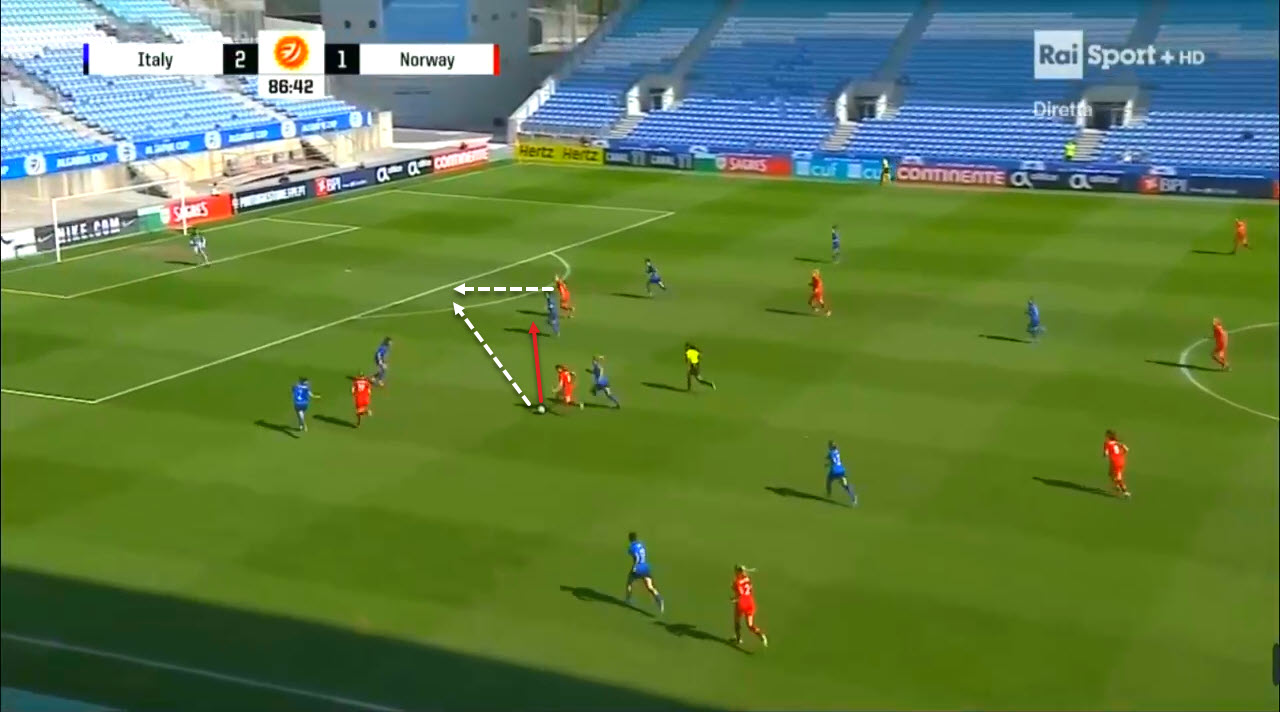 This match was a real test for both teams as it explains the development of both sides and will be insightful for both coaching staff. Such games give coaches the ability to identify exactly what needs to improve and what is already excellent while it allows them to fix such things without being under pressure since these are friendly matches and not official ones.

Italy will need to work on improving their defensive organisation during counter-attacks while working further on attacking movements as well as on the chemistry between the attacking and the midfield players.

On the other side, Norway will have to address their final pass/shot decisions and accuracy as well as improving the attacking movements without the ball. More importantly, the coaching staff will have to either work further on the organisation of the defensive tasks and movements of their actual formation or change their formation in order to suit the players’ characteristics and make them more crucial in terms of defensive decision-making, movements and marking.