To many, Luca Oyen very well may become the next big talent to emerge from Belgian football. Born in Nottingham to Belgian parents, Oyen came through the youth academy at Belgian side KRC Genk before making his debut for the senior side in 2020. Currently a Belgian U19 international, it won’t be long before Roberto Martinez may have a look Oyen’s way for potential senior call-ups.

This tactical analysis and scout report will look at some strengths emerging in Oyen’s game, as well as look forward to what the future may possibly hold for this bright young talent. 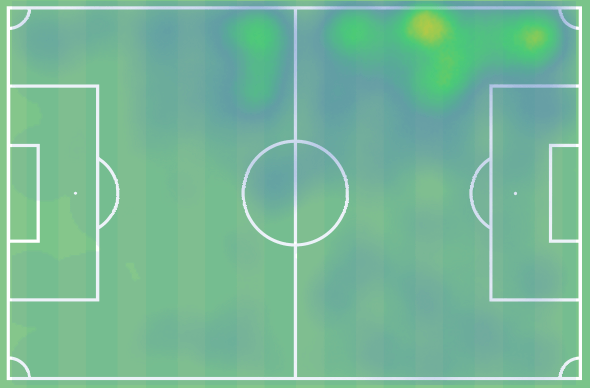 In Luca Oyen’s early career so far, he has been utilised on the left side of a front three. Oyen however, has not yet become a starter under Bernd Storck this season, with the German favoring record signing Theo Bongonda from the start on the left side of his 4-3-3. One thing noticeable about Oyen so far is that he doesn’t often cut inside from the wing, rather, he prefers to dribble his way to the byline and send crosses into the box from wide areas. Storck’s tactics have suited Oyen well so far, and it will be interesting to see how his position in the side develops as he starts to gather more playing time.

Not afraid to take defenders on

One strength that is beginning to develop in Oyen’s game is his dribbling ability and tendency to take defenders on 1v1 or even 1v2. Through the mostly substitute appearances that he has had this season, Oyen has been able to show flashes of his close control and dribbling ability. So far this season, Oyen is attempting 7.33 dribbles per 90 with a success rate of 54.8%, showing that he is not afraid to try and get past defenders with a little bit of trickery. 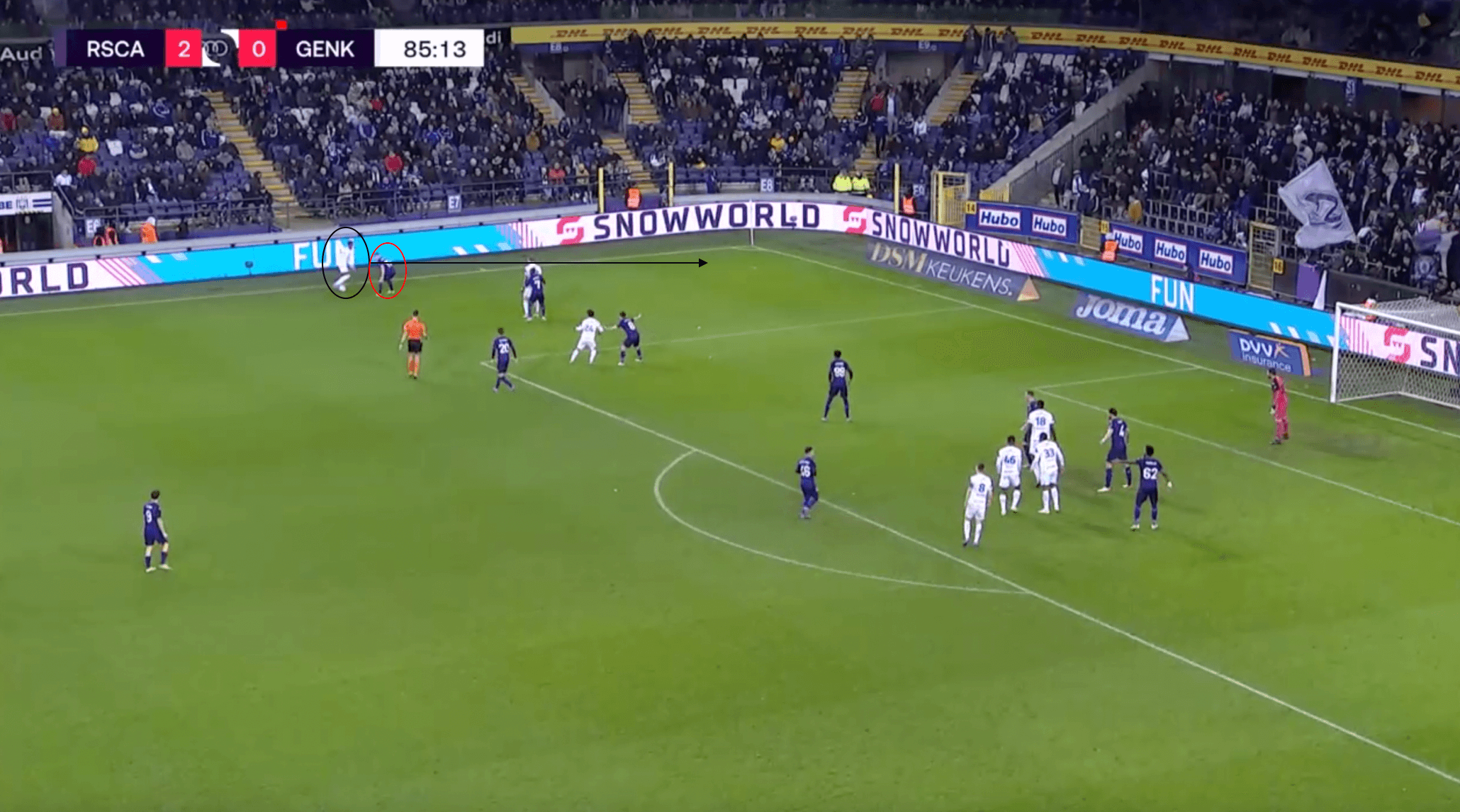 The phase of play above shows a recent example of his dribbling ability from the match against Anderlecht. Oyen is 1v1 against Anderlecht fullback Sergio Gomez. Oyen is able to use his close control and dribbling to show Gomez the inside before sending the ball to the outside and using a burst of acceleration to get past Gomez and towards the byline. Unfortunately for Oyen, the covering defender is able to reach the ball before him, sending it out of play for a Genk throw-in. 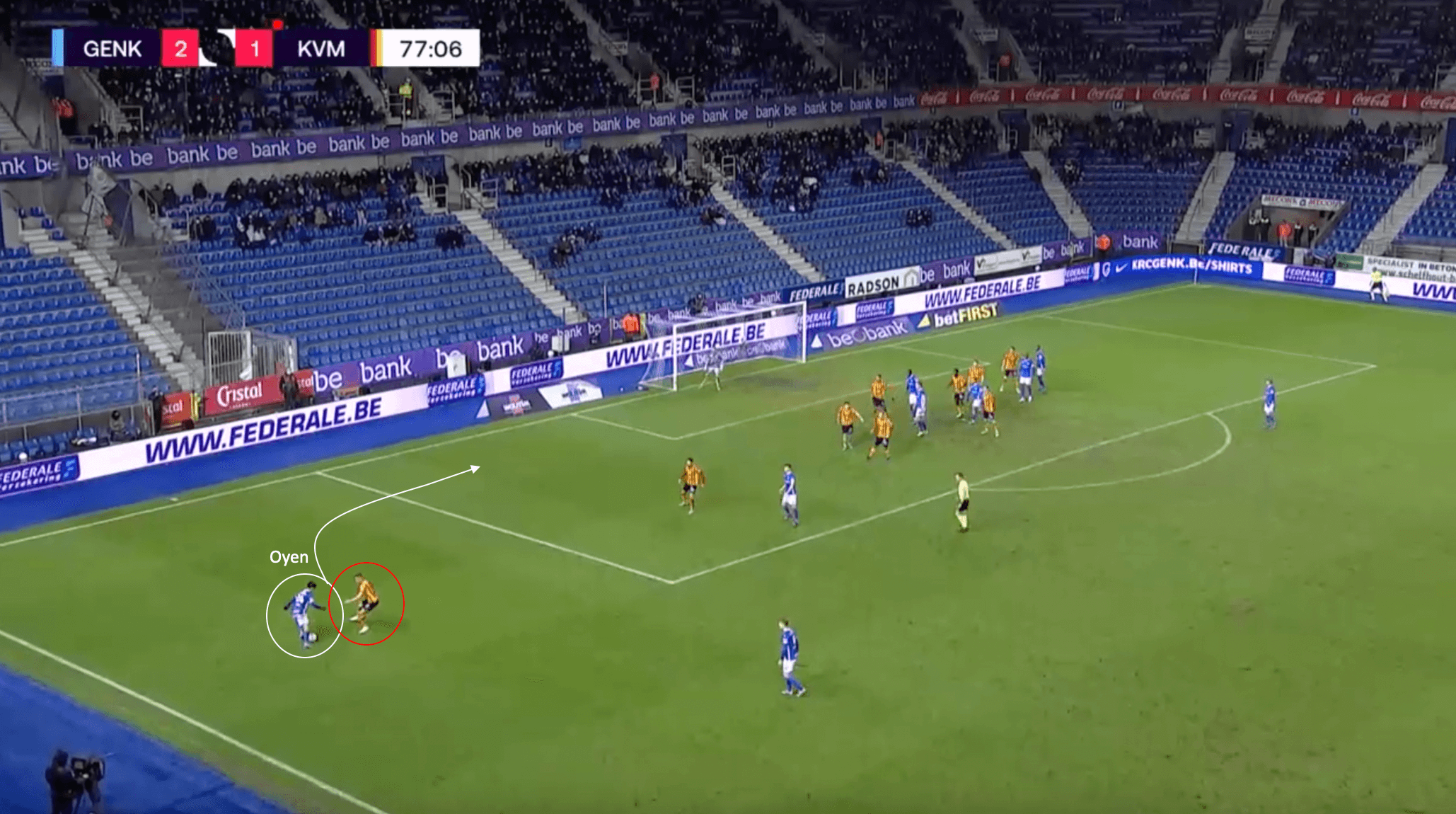 Here is another 1v1 situation that Oyen finds himself in, this time against Mechelen. Oyen is isolated 1v1 against the Mechelen fullback and decides to take him on instead of possibly passing the ball back to his open teammate who could send a cross into the box. Oyen once agains is able to get the defender off balance by showing him the inside. This time, keeping the ball close to his body, he is able to accelerate to the outside, gliding past the fullback and shaking off his challenge. Unfortunately, Oyen’s pass is poor, allowing Mechelen time to clear it. 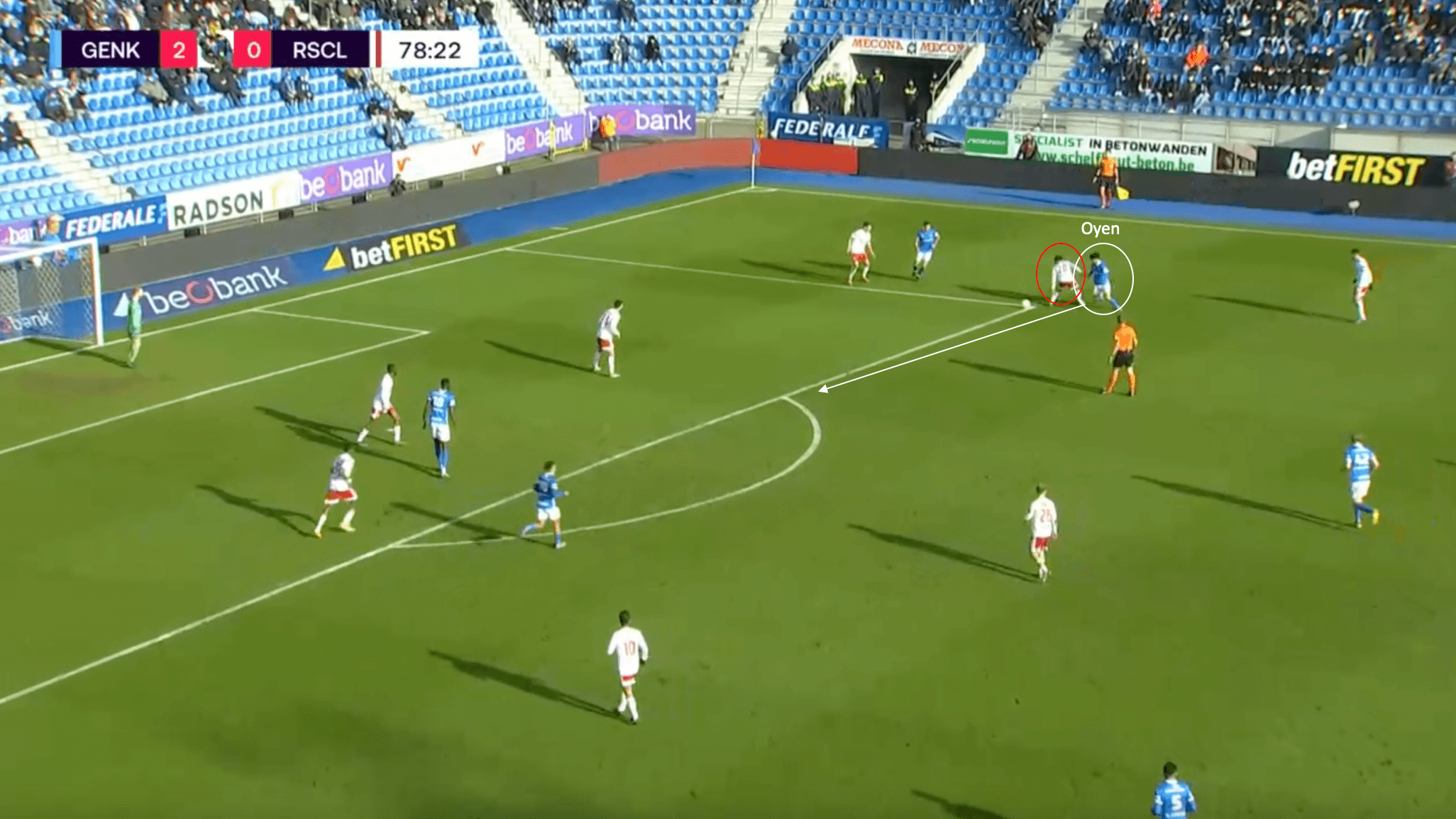 As already shown, Luca Oyen is capable of doing simple things when dribbling past opponents, using his acceleration to get past them and into space. However, he also has the ability to wow people with his dribbling as well. In the phase of play above against Standard, Oyen is once again isolated 1v1 against the defender. With no space to try and show him inside and go outside, he instead decides to go around him. Oyen plays the ball past the defender before gliding past him and back onto the ball, finding himself in plenty of space on the edge of the 18-yard box. Unfortunately, instead of going for goal himself, Oyen decides to lay the ball off to a teammate, whose ensuing shot is saved. 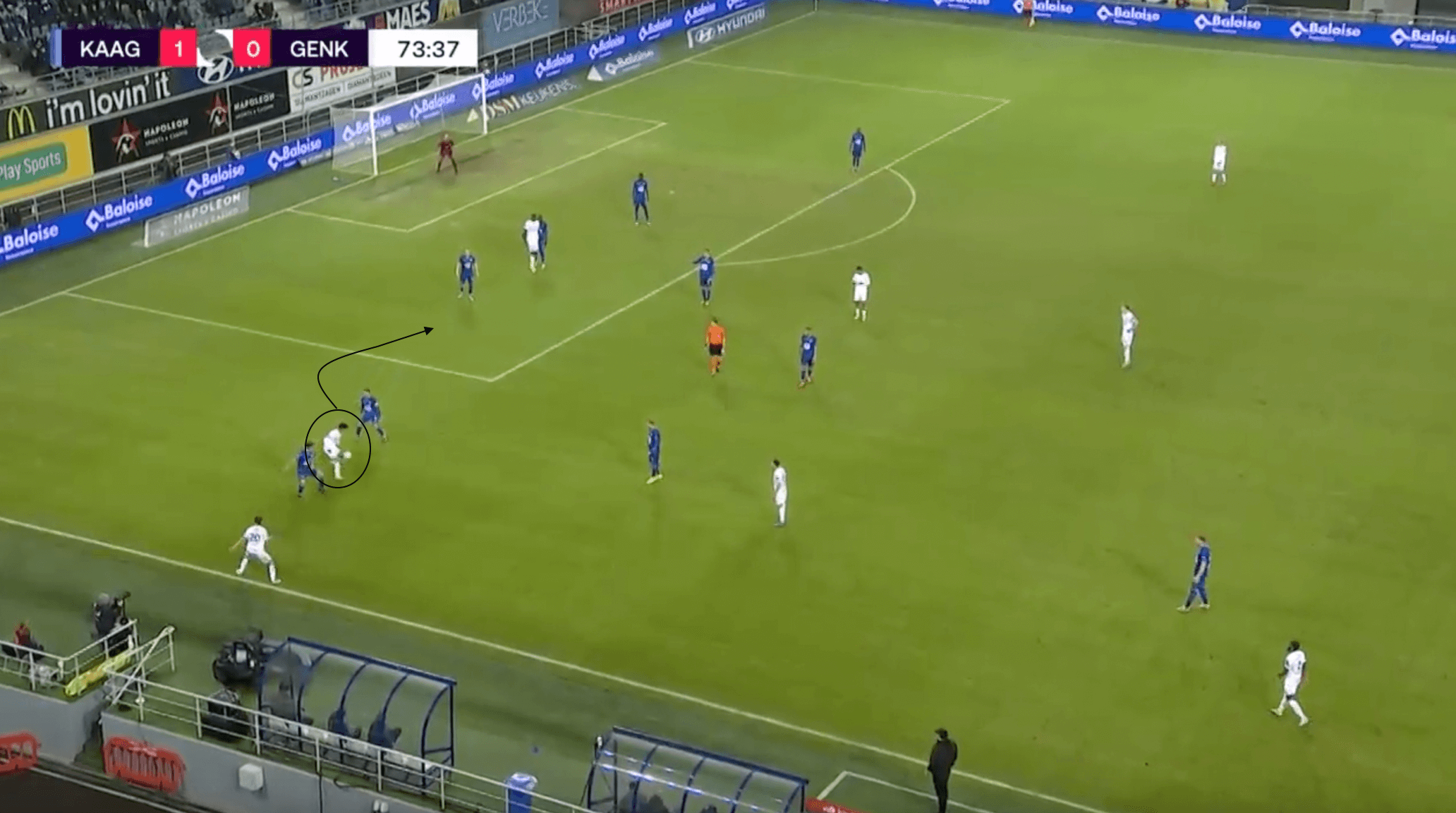 Oyen is also able to show his close control and dribbling capabilities in 1v2 situations. In the match above against Gent, Oyen receives the ball from a throw-in and is instantly closed down by two Gent defenders. He is able to use his close control to keep the ball close to him, before dribbling past the defender in front of him and into the box. Of all the strengths developing in Oyen’s locker, dribbling is his strongest.

Crossing near the byline

Another area of Oyen’s game that is starting to develop and turn into a strength is his crossing. As mentioned earlier, Oyen likes to dribble towards the byline before attempting to send crosses into the box. While this is still a part of his game that needs improvement, and will improve, it is now beginning to evolve as a part of his game that he relies on. 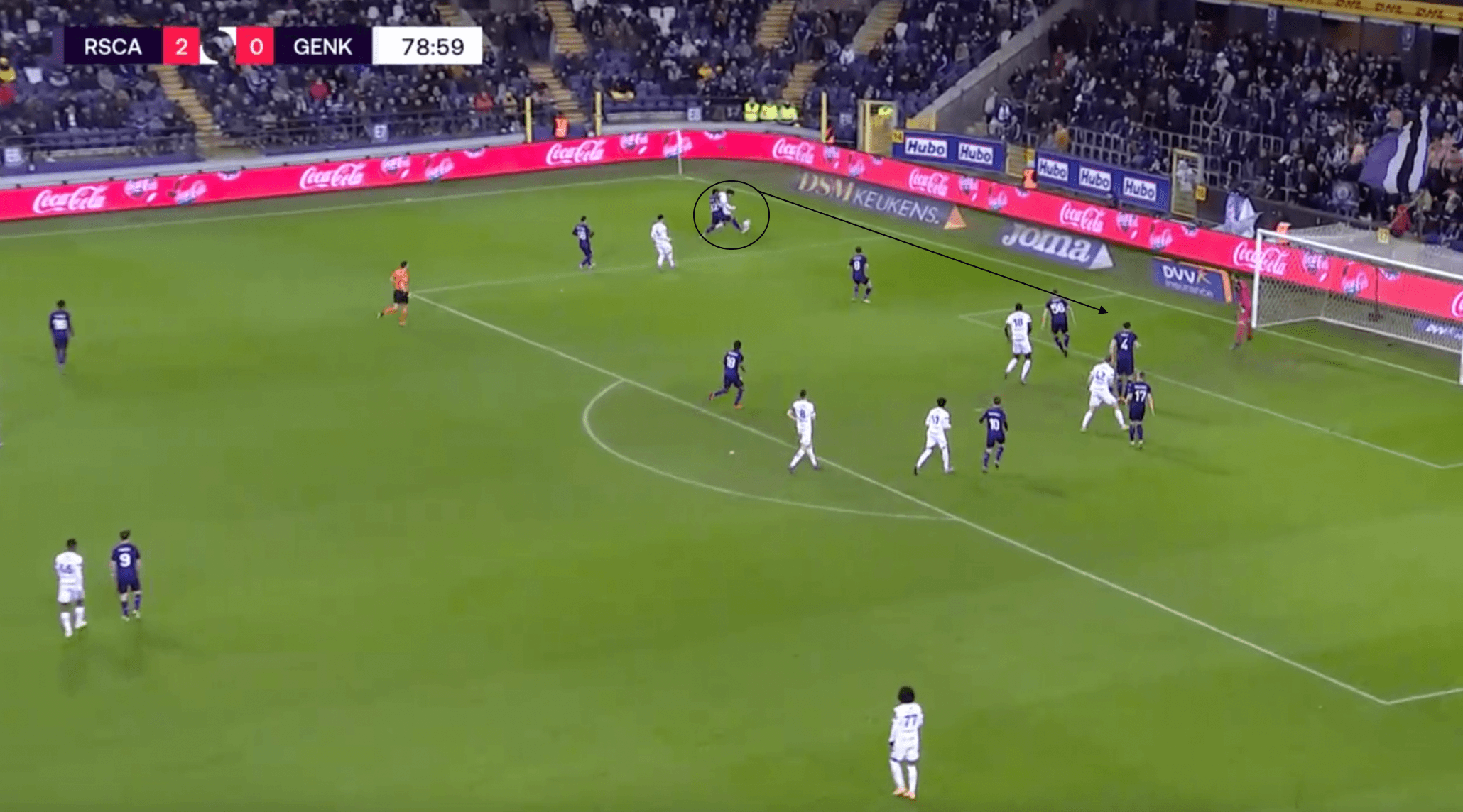 The phase of play above shows an instance of Oyen’s crossing. Oyen is in possession and driving towards the byline. With the Anderlecht defender closing him down, Oyen is able to send a good looping cross into the box towards his two teammates near the penalty spot. The ball goes over Onuachu’s head and comes to Thorstvedt, who puts the ball in the back of the net. Unfortunately, Onuachu fouls the goalkeeper, so the goal gets ruled out. 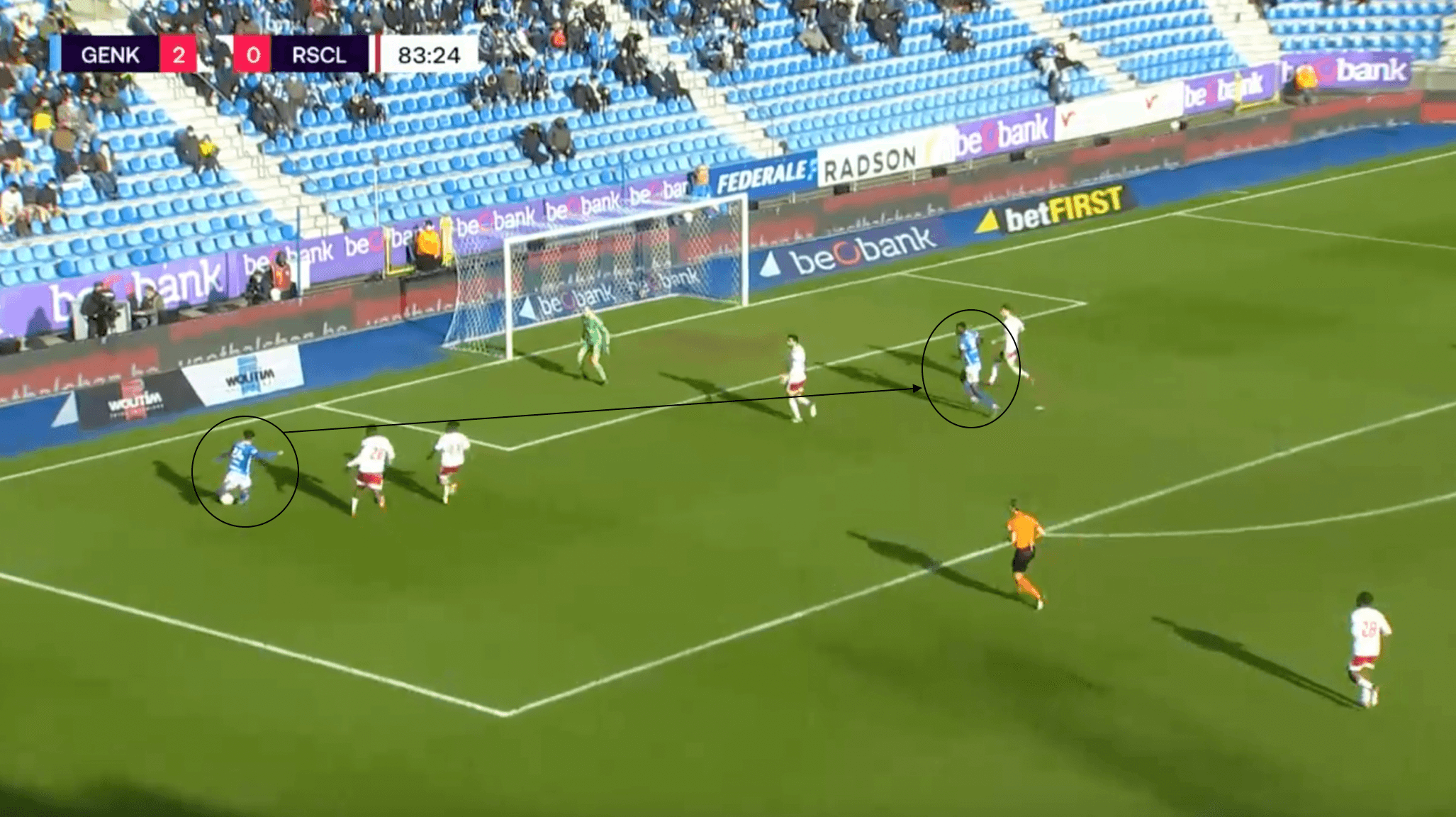 Oyen is also capable of playing accurate ground crosses as well across the 18-yard box. Above, Oyen drives into the box, accelerating away from the Standard defender. He spots Onuachu near the penalty spot, and is able to play a good cross to his feet. Unfortunately, Onuachu miscontrols, and as a result, is not able to get the shot off.

When analysing Luca Oyen’s crossing, it is noticeable that it still needs improvement. In a Europa League match against Rapid Wien, Oyen is driving towards the byline and decides to play a cross backwards, towards the free man making a run into the penalty box. Unfortunately for Oyen, he plays the cross short, with it easily being intercepted by the Wien defender circled in red. While dribbling may be Oyen’s most polished attribute, his crossing ability is still a little rough around the edges. He can certainly be dangerous from crossing positions, and more game time will go a long way to making it more consistent.

Movements off the ball

A good trait to look for in young players is how they analyse the game when they are not in possession of the ball. Are they looking for spaces to run into to receive possession in dangerous areas, are they dropping into pockets to receive the ball. Essentially, how is their off the ball movement. At only 18 years old, Luca Oyen has already demonstrated his in depth understanding of this, with his recognition of the spaces and off the ball movement being very impressive. 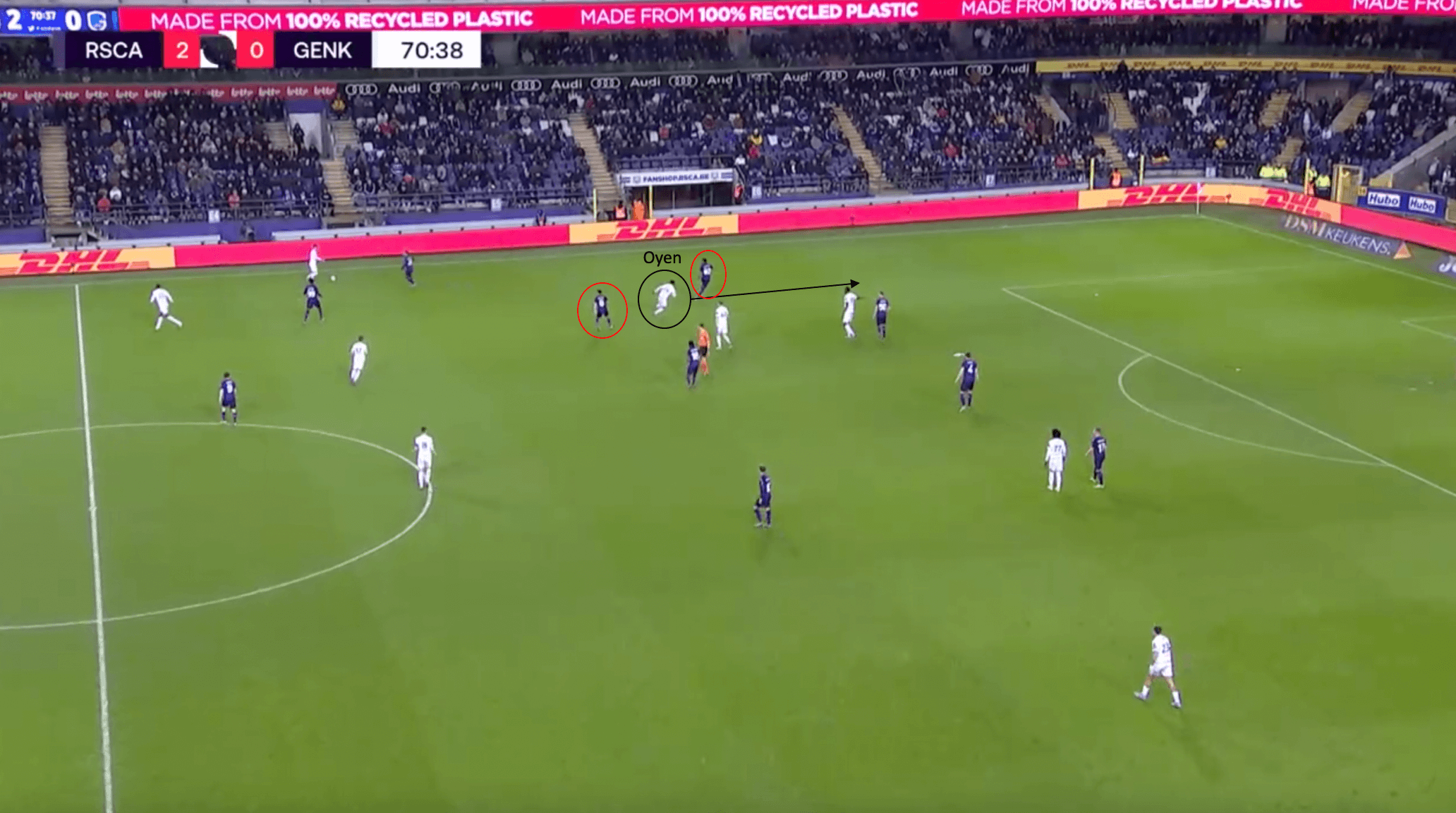 This phase of play above shows a prime example of Oyen noticing the space and moving into it. Genk are in possession with the ball on the far touchline. Oyen is operating a little bit deeper, in between the opposition midfield and defensive lines. Both opposition defenders circled in red are caught ball watching, Oyen notices this and makes a run in behind into the space. Unfortunately, the ball is not played to him, with the pass going backwards instead. However, his teammate acknowledges the good run that Oyen made, and apologises to him. 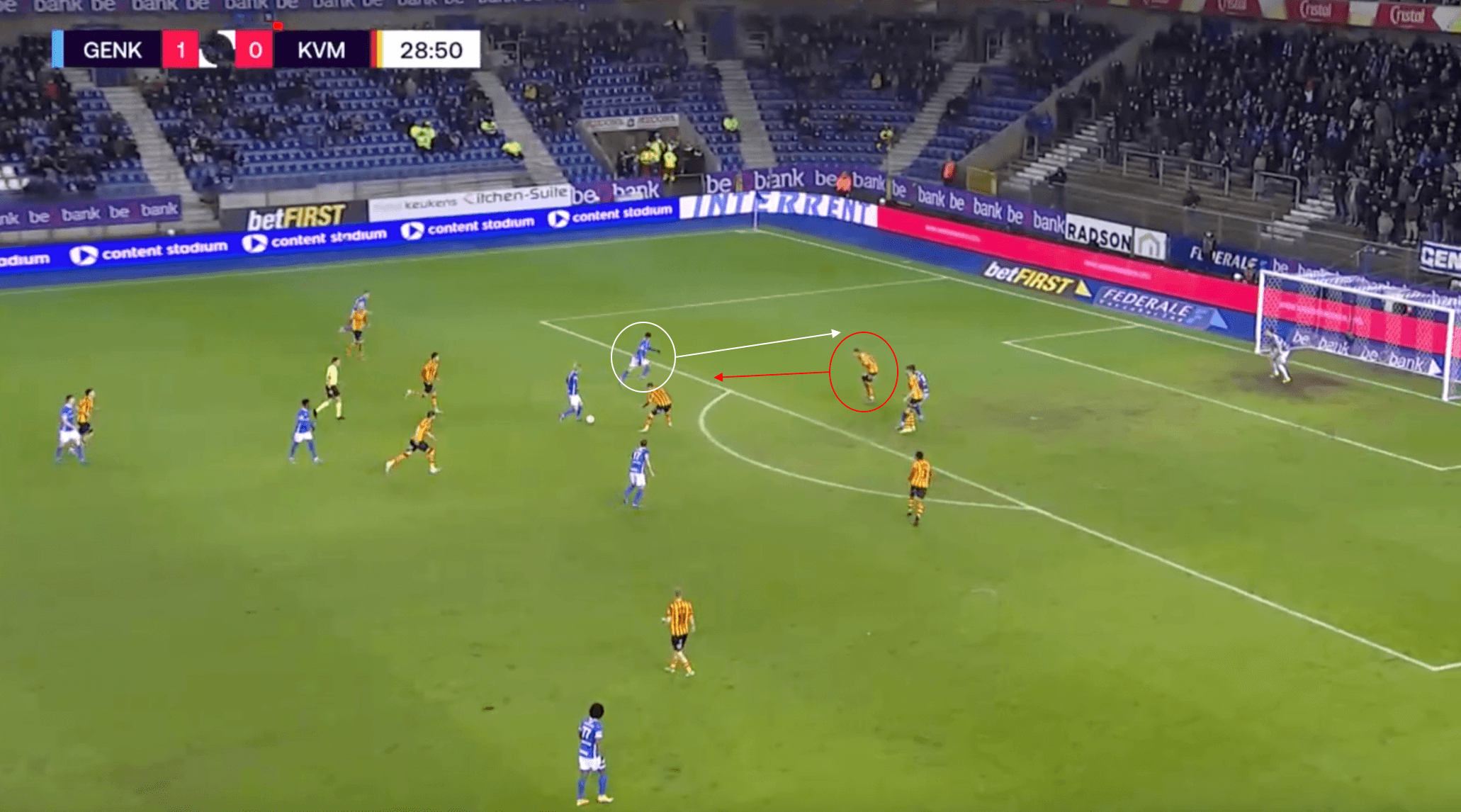 Above shows another good example of the off the ball runs that Oyen is capable of making. Mechelen turned the ball over in a dangerous area, with Genk regaining possession high up the pitch. The defender circled in red is caught ball watching the player in possession, which Oyen notices. This allows him to make a great run in behind the defence and in on goal. His teammate however, only has eyes for goal, and shoots, with the ball going over the ball. Unfortunately for Oyen, another good run into space was not noticed by his teammate. 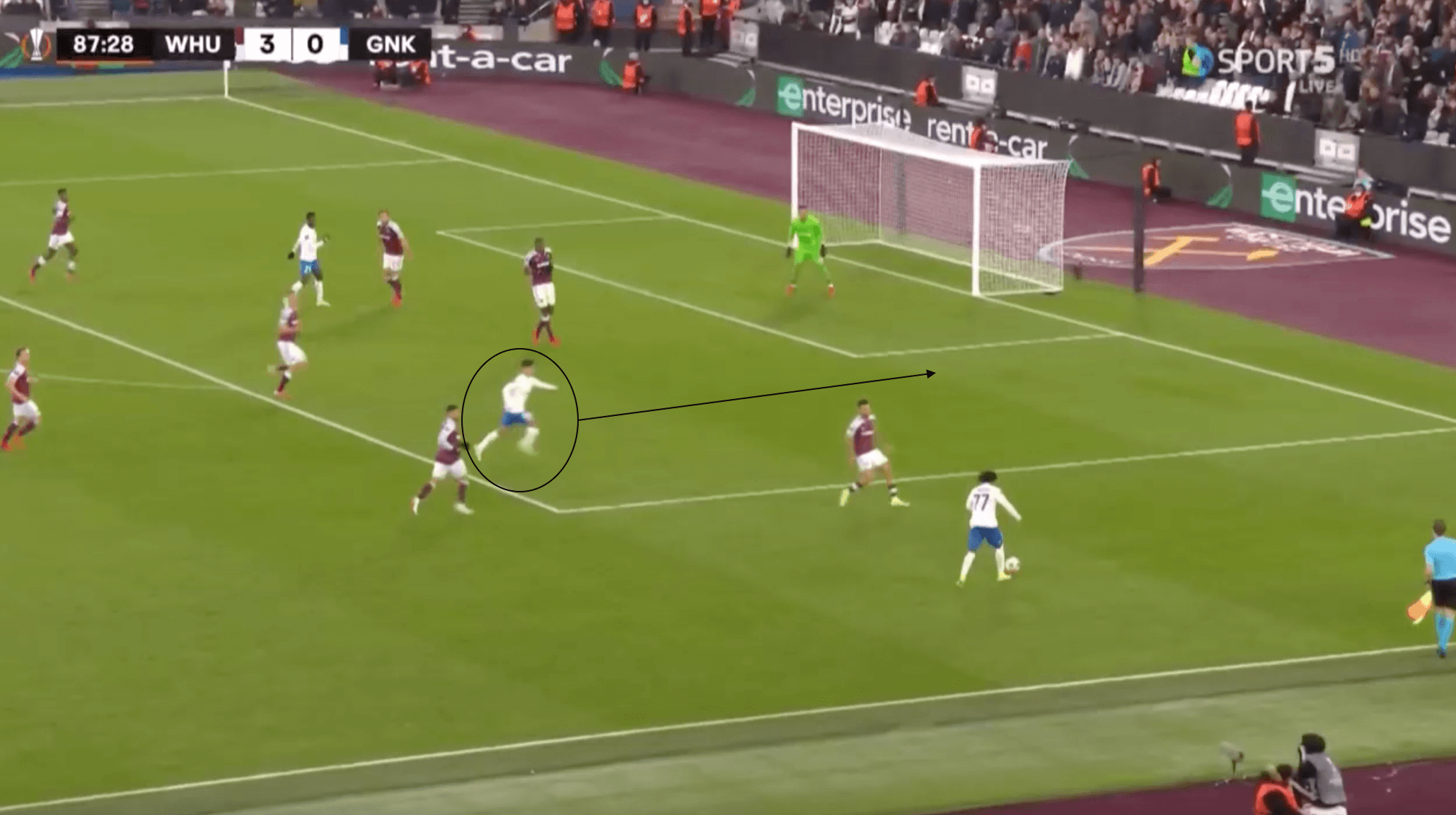 While Oyen enjoys playing in a wider position and making runs in behind from these areas, he will also make underlapping runs if his fullback decides to move forward into the attacking third. In the phase of play above against West Ham in the Europa League, Oyen plays the ball out wide to his fullback before engaging in an underlapping run. He gets behind the West Ham defence and points to where he wants the ball. The fullback obliges and plays it into the empty space. Oyen runs onto it and is able to play a dangerous cross across goal, which the striker unfortunately sends over the bar.

As shown in this analysis, Luca Oyen, though still only 18, has shown why most consider him one of the next big talents to come out of Belgian football. Genk is one of the biggest exporters of talented players in all of Belgium. The likes of Manchester City’s Kevin de Bruyne and Real Madrid’s Thibaut Courtois are just two world-class players that have come through Genk’s academy. With Luca Oyen just now starting to break into the Genk first team, it will be a few seasons before any thoughts of him leaving the club begin. What is certain is the world-class talent that Oyen possesses. 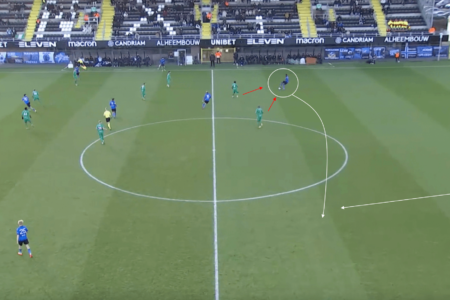 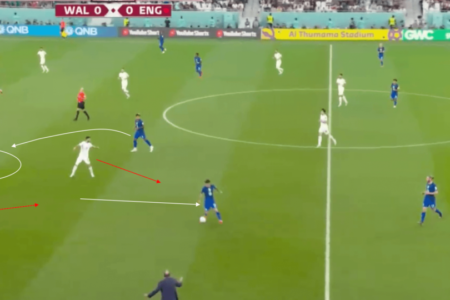