On the 2nd of December 2021, Manchester United appointed Ralf Rangnick as their Interim Manager until the end of the 2021/2022 season. Once the season has finished, he will then accept a consultancy role at the club for a further two years.

He took over from Ole Gunnar Solskjaer as the Norwegian’s position at the club had become untenable, with the team only winning one of his last seven games conceding sixteen goals in the process. Solskjaer’s United were a team whose playing style lacked defensive structure, lacked any attacking principles, and relied too heavily on individual moments to win matches.

With United struggling to move forward and compete with a modern football strategy, Rangnick was brought in by the club to resolve that. His tactical style has previously been the epitome of organised collective football, he sets his teams to play a vertically quick purposeful style of football with a preference to counter-press high up the pitch and look to control the space the opposition plays to by creating pressing traps and setting pressing triggers. His remit whilst managing the club is to help create this identity and culture within their playing style, put the foundations in place to ensure continuity with their next managerial appointment and push them towards Champions League qualification

However, whilst there has been a notable improvement in their results winning 8 drawing 6 and losing 1 in the 15 games he has managed, he has been unable to instil the tactical principles his reputation resides against on a consistent basis.

In this tactical analysis, we will study the issues Ralf Rangnick has faced whilst trying to implement his tactics on this current Manchester United playing squad.

As soon as he took charge Rangnick switched from the 4-2-3-1 that Ole Gunnar Solskjaer used in fourteen of the seventeen matches he managed this season. The German manager opted for his renowned 4-2-2-2 formation.

The reasoning behind the use of this formation is that it is better suited to Ralf Rangnick’s style of play. The 4-2-2-2 provides compact vertical play. In possession, it offers multiple lines for progression during the build-up which offers a quicker transition. It offers the team rotation and flexibility in the attacking third, with the opportunity to create overloads centrally and out wide, and with the extra line of attack that the two attacking midfielders provide it allows the team to attempt to control the half-spaces. When you lose possession, you have 4 to 6 players in the opposition’s half all counter-pressing with the intention of winning the ball back as close to the opposition’s goals as possible.

In his first two league matches, Manchester United played Crystal Palace and Norwich and won each game 1-0. And though there were teething issues, there were indications within each of these games that the players understood Ralf Rangnick’s approach and what is required for his principles of play and 4-2-2-2 to work.

In his first game, you can see the position the United players have taken up to win the ball immediately after losing it. As soon as the ball comes inside, Fred immediately presses the man in possession while the remaining players look to cut off all the other viable passing options available. Under pressure, Crystal Palace give the ball away and concede a throw-in deep in their own half. 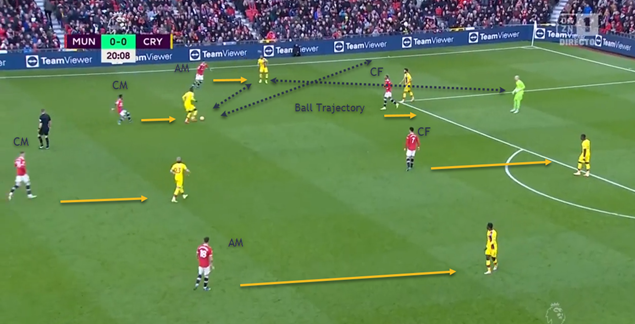 In Rangnick’s second game against Norwich, you can see the shape the 4-2-2-2 presents in possession and how it allows you to play vertically. The two attacking midfielders are sitting narrow, in between the lines. By doing this they have created space out wide for the right back to attack, it allows Scott McTominay to play forward cutting out 2 Norwich players in the process and in this passage Marcus Rashford has dropped into space behind the midfield, pulling the defender with him. This rotation and movement creates a bigger space between the centre backs for the pass to play in behind. In this passage of play, United transitioned from the defensive third to the attacking third with 2 forward passes and within 8 seconds. A fundamental aspect of how Ralf Rangnick wants his teams to play.

Over the next three matches, it was clear that the teething issues were bigger problems that Ralf Rangnick and Manchester United were struggling to resolve, and even though the results in the three matches were not disastrous with one draw one win and one loss, certain aspects of United’s play did not allow the team to function cohesively, and their style of play lacked any kind of fluidity.

One notable issue with Manchester United is their ability to progress the ball effectively from back to front. As mentioned, one of the benefits of the 4-2-2-2 system is it offers multiple lines of passing options from the build-up, and the responsibility of progressing the ball vertically from this area falls on the two centre backs and the two players playing in the double pivot. Its essential for the ball to be progressed quickly and vertically to get the full benefits this system provides in the attacking third. As their ball progression is not productive, United often find themselves vulnerable during the defensive transition and easy to play through.

This data analysis below shows two visuals measuring the progressive passes by all the centre backs and centre midfielders that have played 800 minutes or more in the Premier League this season. The data shows that Manchester United’s centre backs are not good enough at progressing the ball during the team’s build-up play. Out of all Manchester United’s centre backs Harry Maguire is averaging the most progressive passes per 90 minutes at 7.67 but this is still only average when compared to how well other centre backs are performing in this area with a similar amount of minutes being played. Both Raphael Varane and Victor Lindelof are performing 5.44 and 5.99 progressive passes per 90 minutes, but this is way too short of the level required for this team to play the quick vertical style of play. 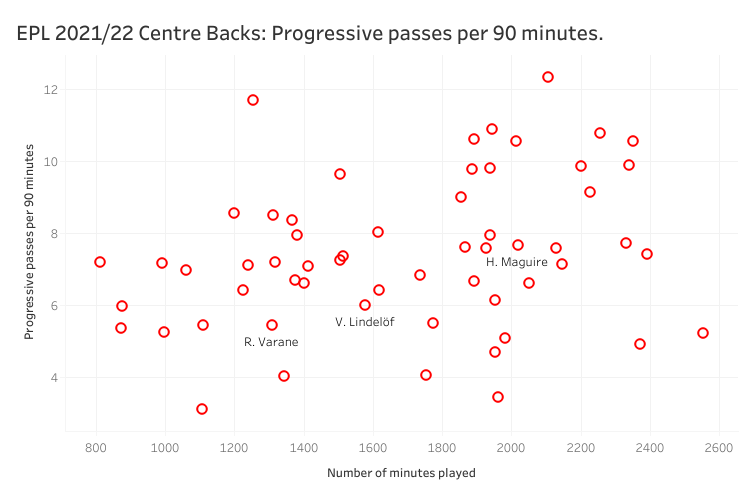 Scott McTominay and Fred are the main pairing selected in the double pivot and are performing better with their progressive passing, but their productivity with ball progression still needs to improve to meet the required standard to make 4-2-2-2 system become more effective across 90 minutes. For Manchester United’s play to improve then the two attacking midfielders need to be receiving the ball regularly when they pick up positions in the half-spaces and in between the lines, as it is their positioning that provides the flexibility and rotation that creates the overloads centrally and out wide. It is important that McTominay and Fred progress the ball at a higher level on a more consistent basis. Fred has seen an upturn with his progressive passes over the last two matches. However, Ralf Rangnick has since changed from his 4-2-2-2 formation. 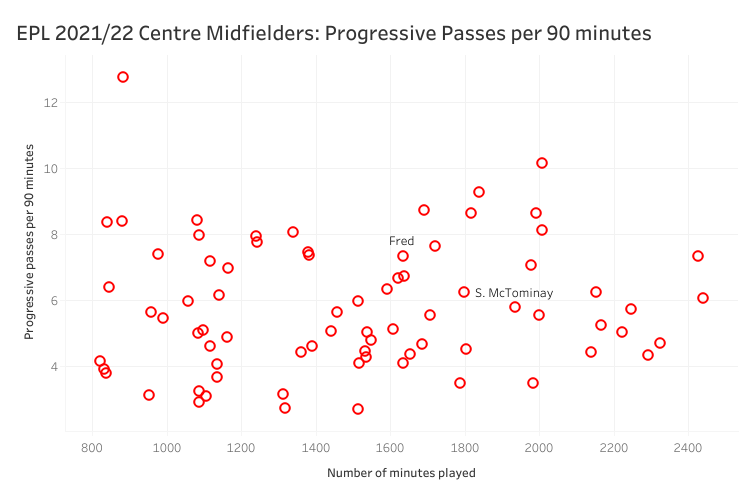 A major advantage of having four players in the attacking third is not just for possession purposes. It allows you to counter-press effectively high up the pitch, with that press being supported with an additional two players depending on the situation. The 4-2-2-2 is ideal for creating pressing traps and setting pressing triggers that enable you to win the ball immediately after you have lost it and high up the pitch.

With Ralf Rangnick only joining Manchester United in December, it was always going to be difficult to impose the 4-2-2-2 without any issues, but it was evident that the counter-pressing system seen occasionally in the Norwich and Crystal Palace games was becoming less collective and more of a problem. It was virtually non-existent by the time they played Wolverhampton Wanderers and even though they remained unbeaten against Newcastle and Burnley both teams found it too easy getting through Manchester United’s high press during their own build-up.

In the passage of play shown here, you can see how coordinated and confusing the United press became whilst playing the formation for the last time. These shots are taken 3 seconds apart with the first image showing where the play started and the second image showing the position Wolves had the ball as they played through each third of the pitch.

You can see Romain Saiss in possession for Wolves with no pressure on him. Ronaldo is between three players without putting pressure on the ball, and not cutting out any of the passing lanes around him. McTominay has made the decision to push forward and press but as Wolves are playing a 3-4-3/3-4-2-1 he leaves a direct passing option for Wolves to get in behind United’s midfield. Instead, Saiss plays into Moutinho who then plays into Conor Coady who then has three options. He can play a safe option to his right, he can play a ball out wide to the right or he can play a vertical pass directly to Trincao, which he does.  In three passes Wolves have moved the ball across the centre of the pitch in their own half and ended up attacking United’s half with a 2v1 overload in the centre of the pitch. 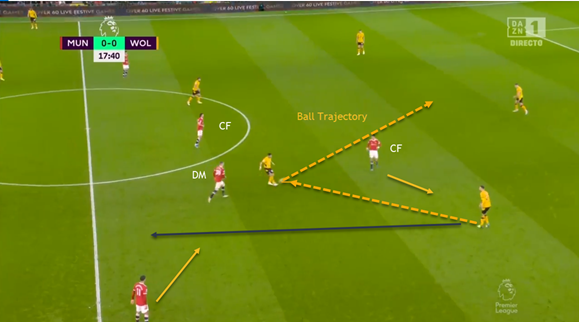 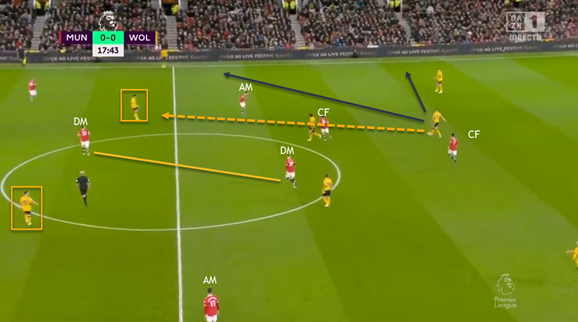 This was a common feature throughout the first half, at times United were playing a 4-2-2-2 but sometimes it was a 4-2-4 as Mason Greenwood and Jadon Sancho kept moving out wide and coming inside situationally. This caused issues for Manchester United when Wolves were building up as they could not get themselves into any good pressing situations. Inevitably this led them to being exposed in midfield as they continued to play high up the pitch but with no real shape.

With the team struggling against Wolves the formation was changed at halftime as it was clear a tactical reshuffle was needed. Unfortunately, they still lost the game because of their obvious lack of ability to press effectively and attack progressively through the centre of the pitch, an area which Wolves dominated. After the game, Rangnick quoted “The problem is that if we play in a 4-2-2-2, that means that the space behind the two strikers and the two six’s is that you do not have a player, you can only fill that gap by the two tens. This is the most challenging and sophisticated job in that system.”

Throughout his career, he has often shown flexibility with the formations he uses whilst also making sure the team maintains the same tactical principles. At Hoffenheim Schalke and Leipzig he has used a 4-2-2-2, a 4-4-2, a 4-4-2 diamond a 4-3-3 and 3-5-2.

After the Wolves game, the team has switched to a 4-2-3-1 formation and the team have remained with this formation since. This formation allows you to keep the four players positioned high up pitch to press when the opposition are looking to build up and you can keep your double pivot in midfield without being at a numerical disadvantage out wide. The double-pivot helps you recycle possession and screen your defence in the same way it would in a 4-2-2-2, there are features to this formation that would allow Manchester United to try and maintain the aspects of play that Ralf Rangnick is trying to impose. But those same issues with the team’s press and ball progression remain.

Ralf Rangnick’s influence on modern-day football cannot be questioned. You can go across various leagues in Europe and watch as teams look to play quick vertical football with a high emphasis on counter-pressing and transition play. His ideas were at the forefront of these tactics. His influence on the English game had already begun long before his arrival through managers such as Jurgen Klopp, Thomas Tuchel, Ralf Hasenhuttl

This tactical analysis shows the issue he is having with trying to impose this style of play on this current Manchester United playing squad. The team have been underwhelming tactically and it remains to be proven whether Ralf Rangnick being involved with a club with Manchester United’s status, is better in theory than in practice.