The opening game week of the 2021/22 Premier League season saw fierce rivals Manchester United and Leeds battle it out at the Old Trafford for starting their season in style. Both Manchester United and Leeds go into the new season in the hope of improving on their last season’s finish as the 13-time champions look to engage in a proper title challenge this season while the Yorkshire club aim to target a European berth.

This tactical analysis discusses the tactics deployed by both Ole Gunnar Solksjaer and Marcelo Bielsa and how Manchester United beat their rivals and grabbed the bragging rights. Let’s begin the analysis.

Manchester United went with a 4-2-3-1 formation despite Ole stating that a shift to a 4-3-3 was potentially on cards. Pogba was once again given a start in the left-wing while the McFred midfield partnership continued. Dan James played as a right-winger while Mason Greenwood was asked to lead the line ahead of Anthony Martial. 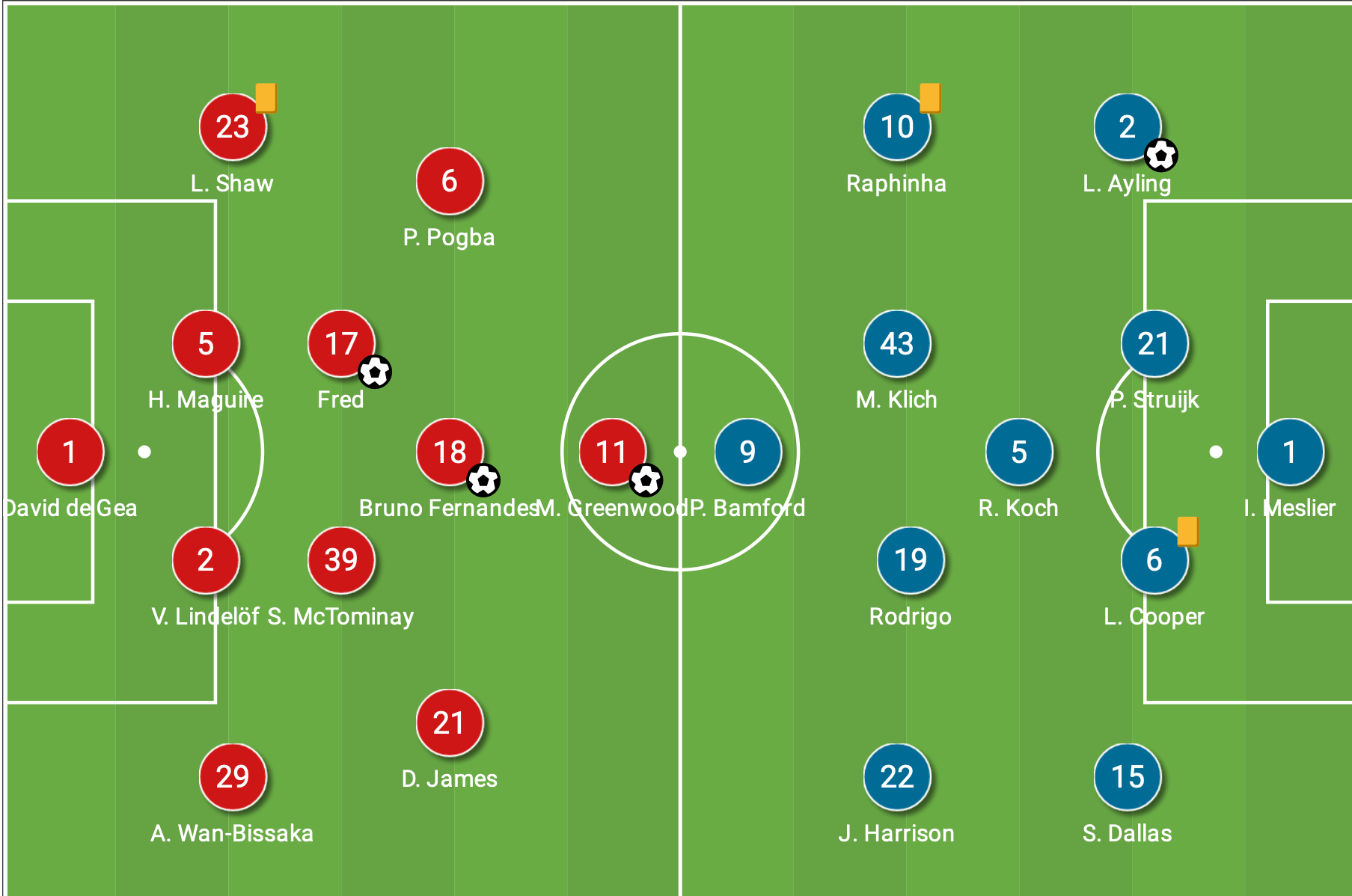 Leeds, on the other hand, went with a 4-2-3-1 / 4-1-4-1 system and Bielsa pretty much retained the majority of his first-eleven from last season with only Kalvin Phillips starting on the bench. Robin Koch started as the defensive midfielder ahead as the German was given an opportunity after a mixed debut season with the Yorkshire side.

Leeds set up in the same way as last season

Marcelo Bielsa has always stuck to his principles to whichever club he has been to and has always remained the same with respect to how he set’s up his sides. With Leeds, he revolutionized them with his man-marking approach and +1/-1 principles that drastically improved the squad. His man-marking approach has the midfield line pressing each of the opposition’s midfield while Bamford would be in charge to press the opposition centre-back where Bielsa would only use 1 player to press as to have an additional defender in the backline. We can see an example of that in the image below. 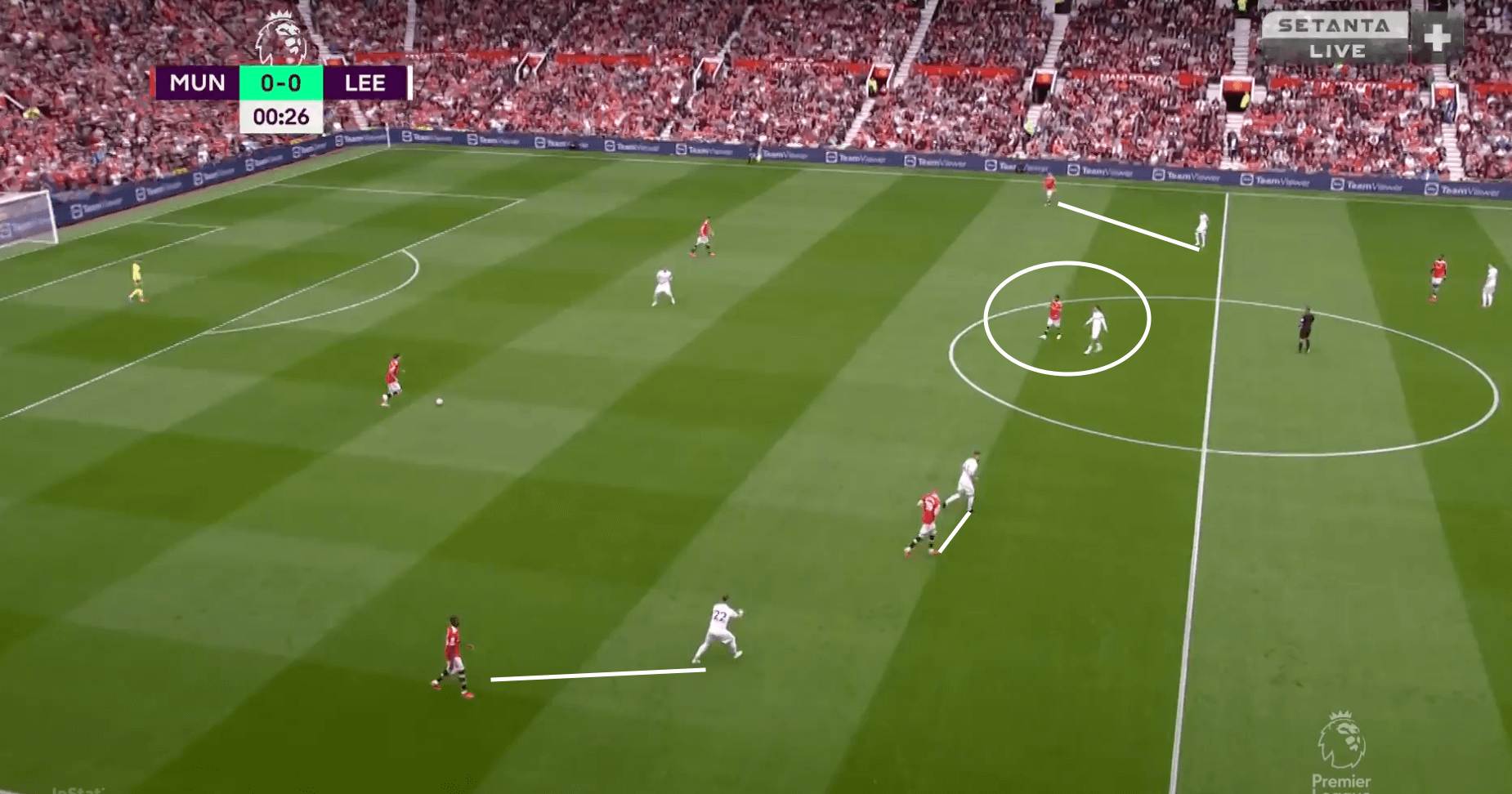 The flexibility of the marking depended on where the ball was as in the final third, Leeds were pretty fixated on pressing their respective players while in a mid-block, it would slightly vary as at times the midfielder would pass on players if they leave their zone and the other one would look after the player who has now entered into there zone.

Another thing that hasn’t changed is Bielsa’s use of high line even against formidable opposition. United tried and did exploit that numerous times in the game but still, Bielsa has been fixated about using it and has carry-forwarded it to the new season. We can see an example of this as Leeds use a very high line and United go direct as Bruno looks to make a run in behind the defence and receive a long ball from Lindelof. 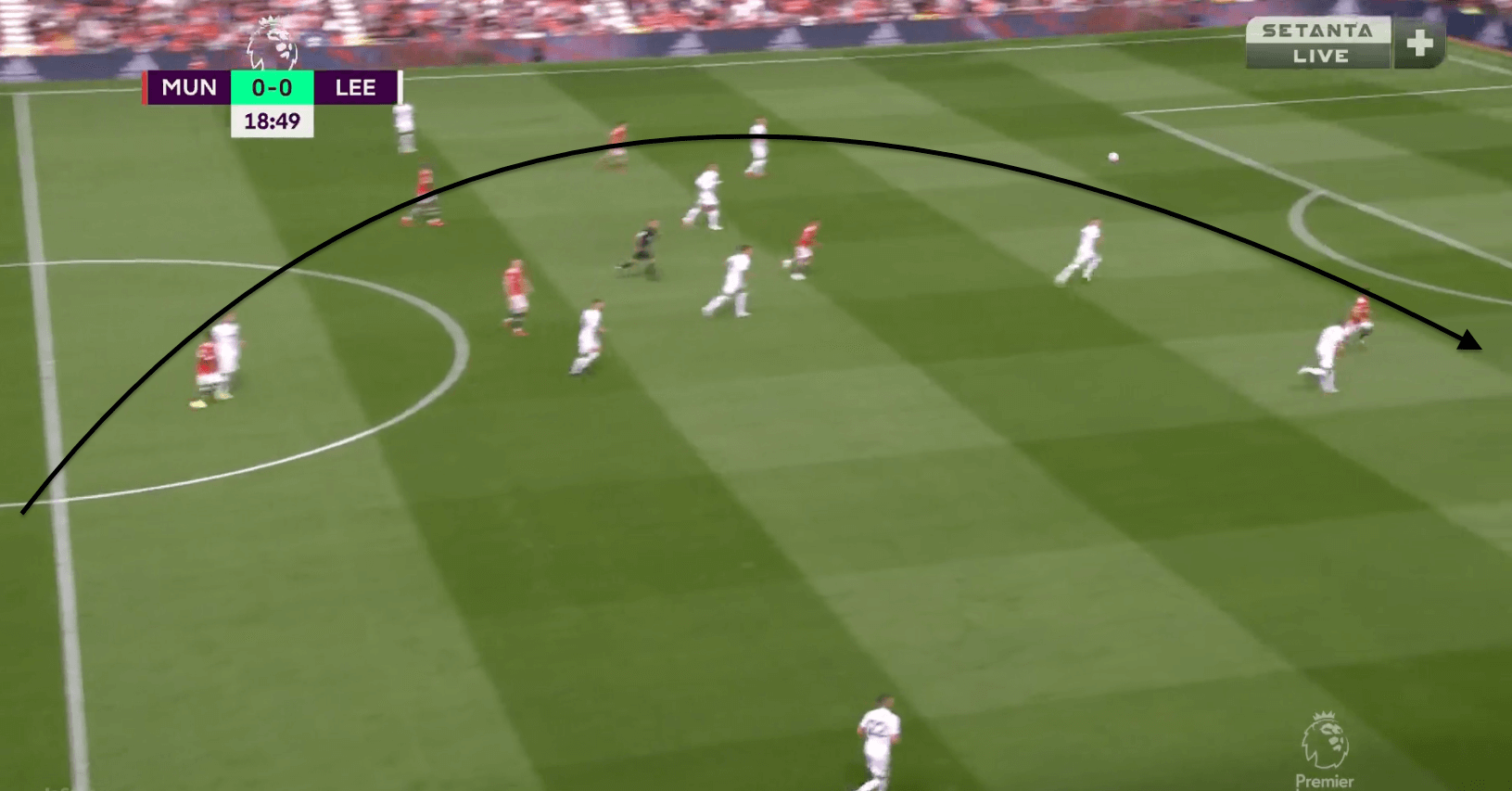 In the same fixture last season, United made good use of Leeds’ deficiencies and used them to brilliantly thrash them 6-2. They came into the game expecting the same approach from Bielsa and Leeds and did the same thing again. Especially, the likes of Bruno and Greenwood used good movements and kept dragging their markers out of position numerous times throughout the game. We can see how Greenwood drops deep and drags Cooper with him while Bruno senses the space and makes a direct run into it. 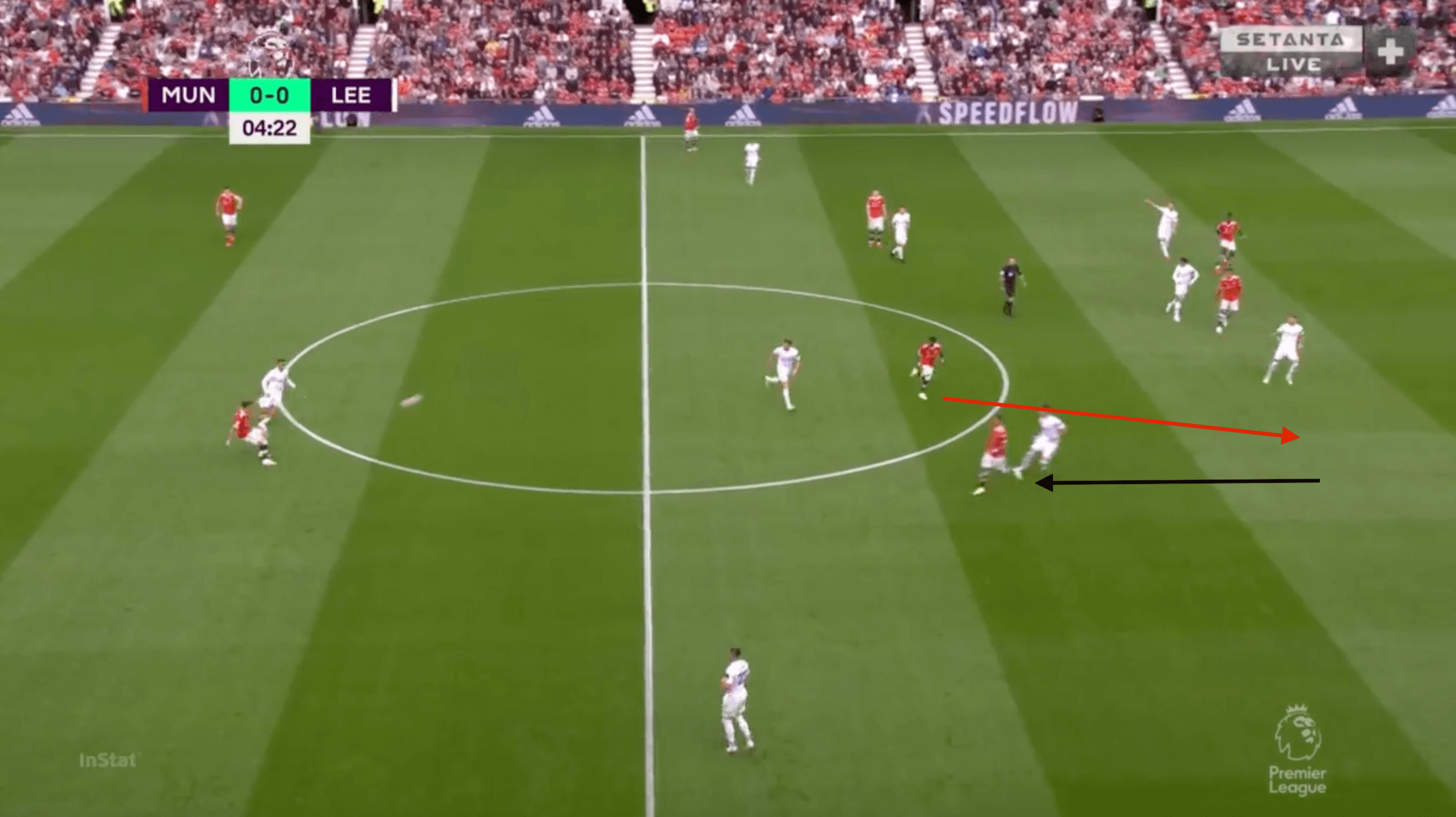 Bruno was mostly involved in all such sequences either as the one who attacked the space or the one who created space. In the example below, we can see him creating the space for McTominay by similarly dropping deep and dragging the defender with him. With the player of his quality, he was able to sublimely play a touch onto McTominay’s path as Scott had a chance to carry the ball. 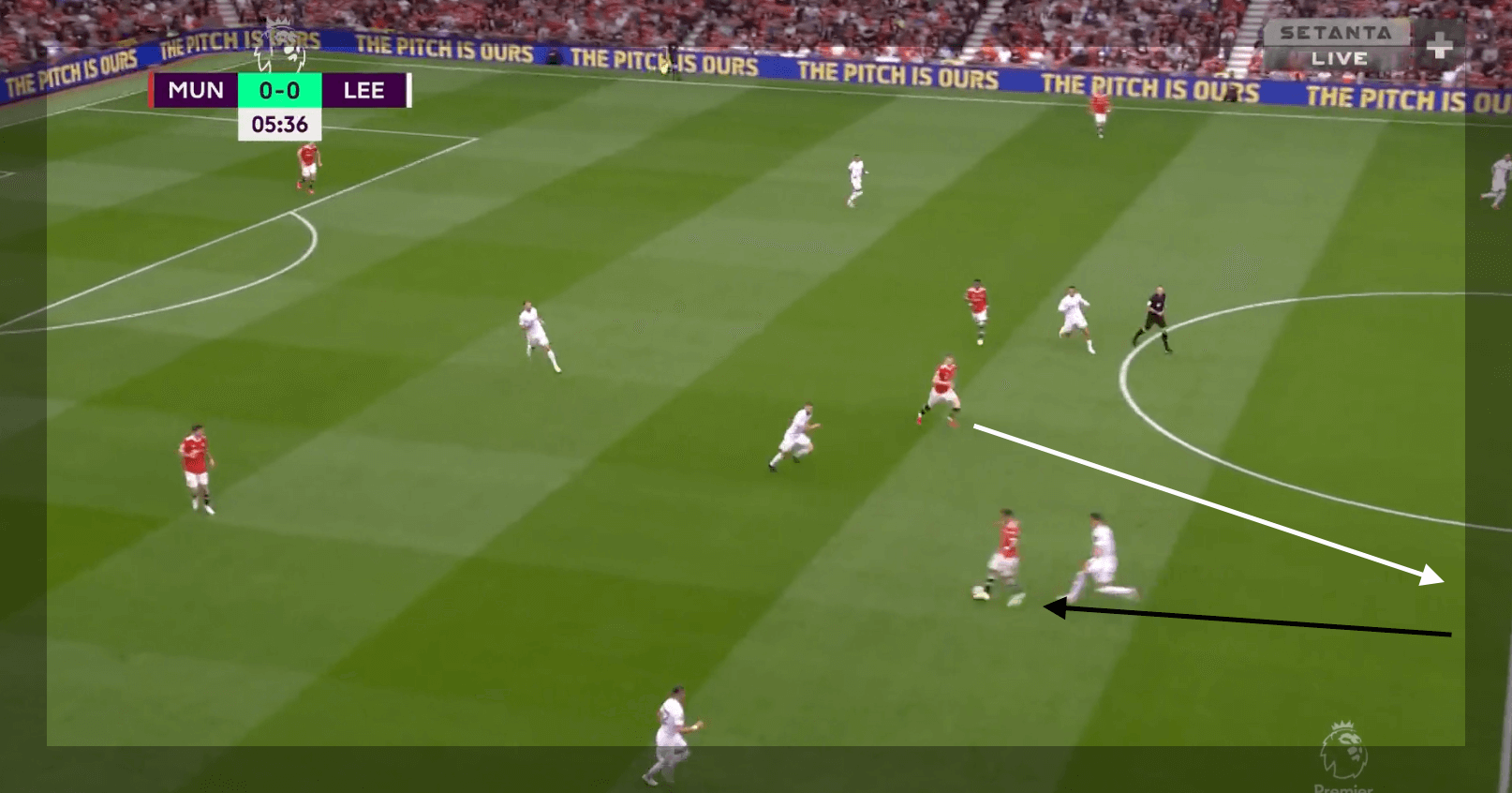 Bruno’s run into the deep was always a cause of concern for the Leeds defenders and they kept facing the same issue in almost every situation. Either Greenwood or Bruno would mostly drop into the halfspace as this was not just to drag the defender vertically but also laterally to create separation between the two CBs. This means that whenever another player attacks the space the other CB would not be in proper coverage to him as he would be very wide with his initial position. We saw a glimpse of this in their first goal, as Greenwood dropping deep would drag Strujik away from his position while also creating a gap between him and Cooper allowing Bruno to make a run. 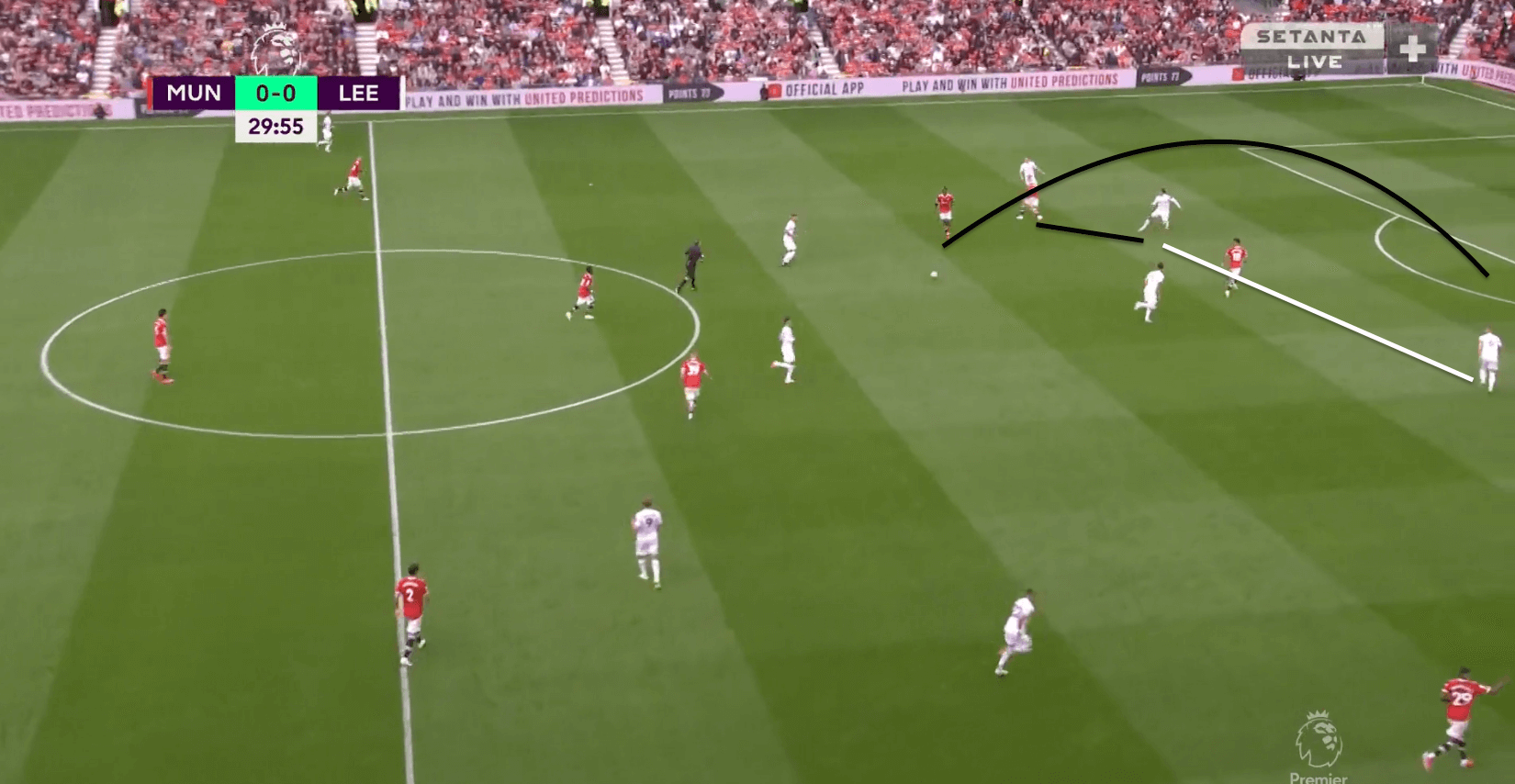 We saw another counter-movement from them in lead up to Bruno’s third goal where Greenwood drops and Bruno attacks the space behind. This countermovement can be something that United fans can be expecting a lot this season especially until the arrival of Cavani. This could also be a go-to strategy for Ole in big games where CBs of such teams would also defend in a man-man fashion. 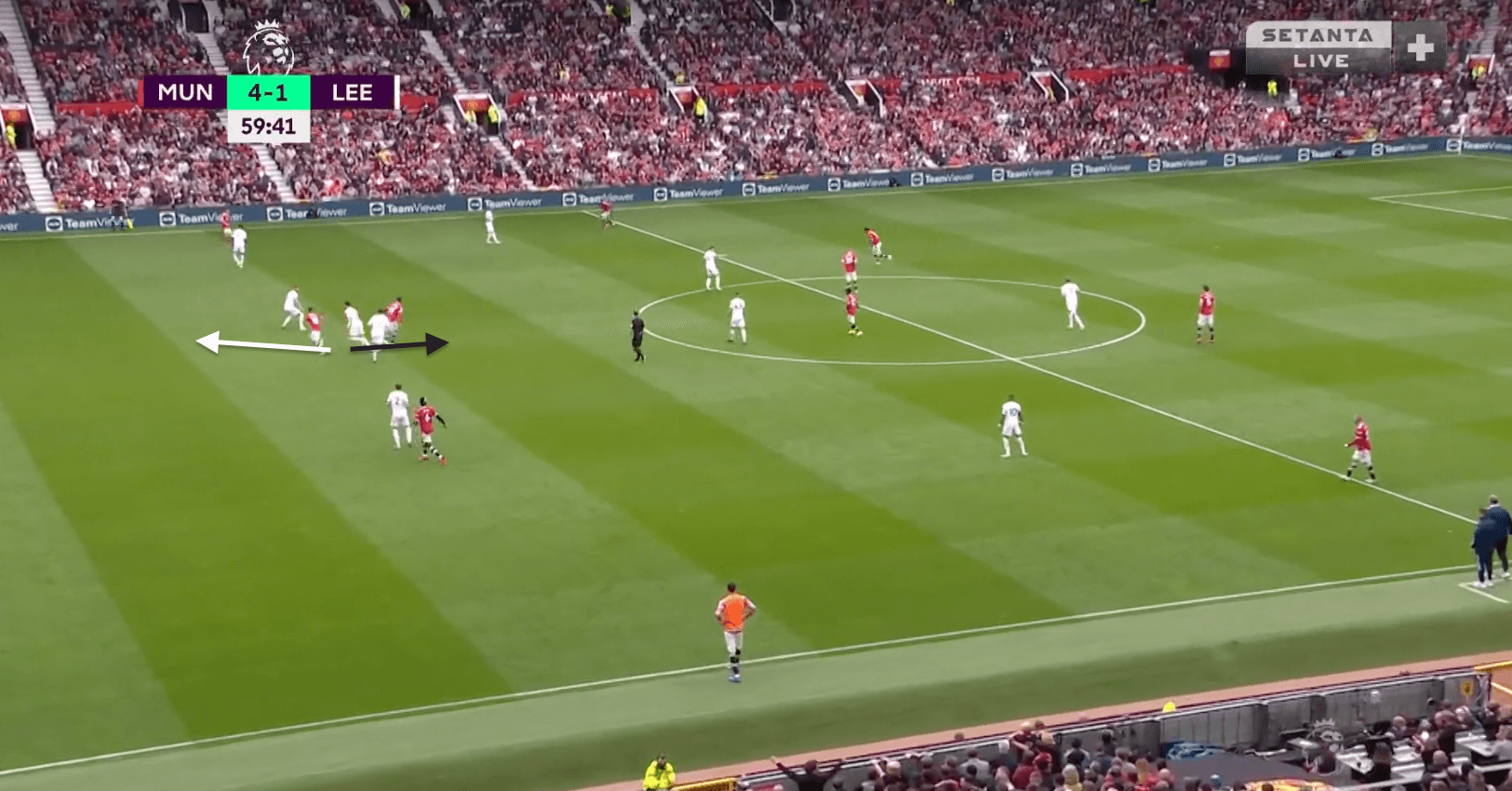 United’s pressing was a mixed bag last season where they had games where they did extremely well against big oppositions by hindering them to play out from the back like Manchester City away from home and also games where their high press was badly exposed against Liverpool at home. The game against Leeds saw United make some minor improvements in their pressing where they were able to find balance in their approach and used triggers very well to start pressing. We can see their basic structure as the ball-sided winger would press the full-back while Bruno would keep close tabs on the CDM and Greenwood having covered the passing lanes to the CBs equidistantly. The far sided winger would position centrally to make the structure compact. This way United were able to block Leeds’ short options. 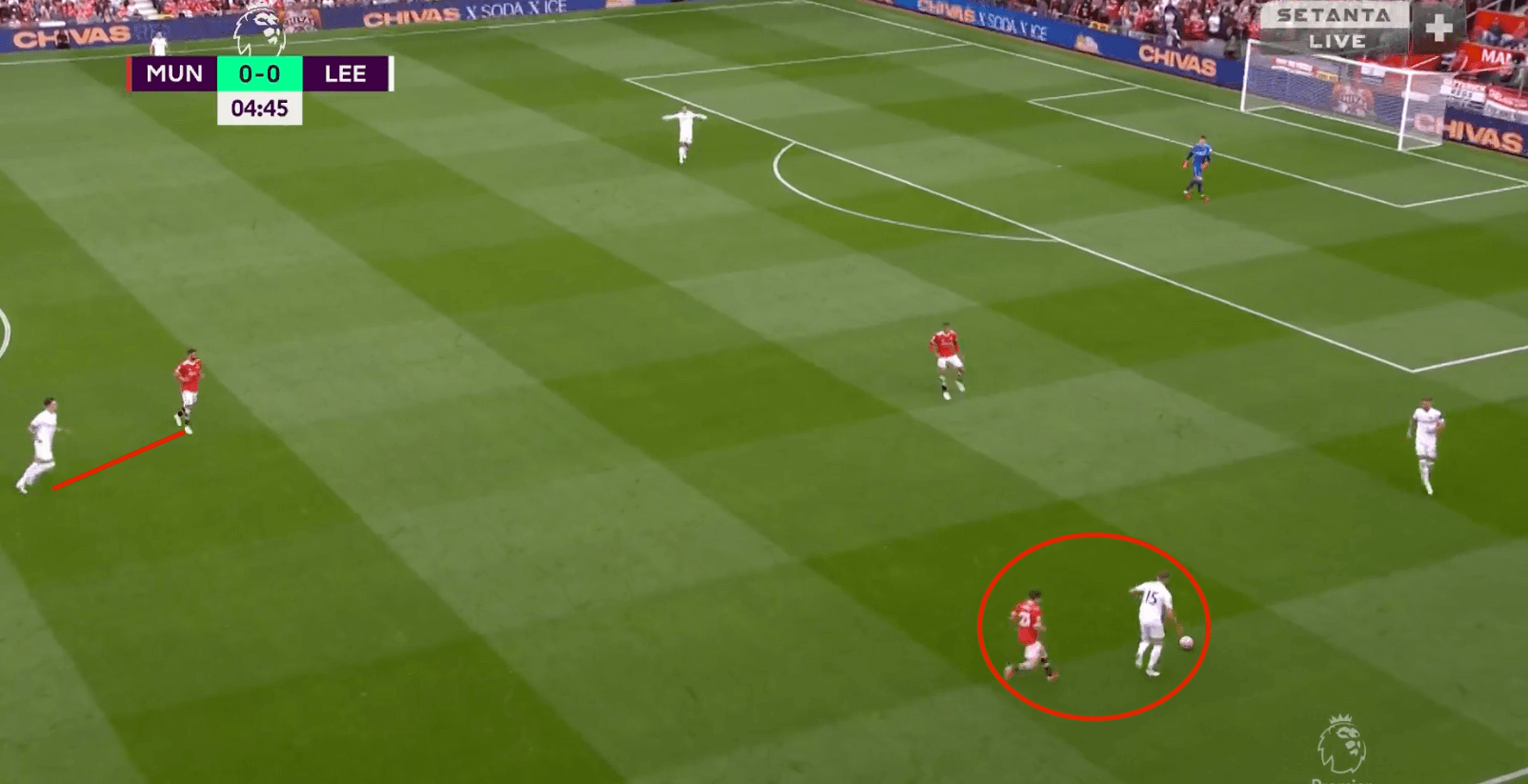 But even during one of the high press instances, we saw Bruno constantly step out and press another CB unnecessarily which was pretty unwarranted as Greenwood was already in a position to press him while CB having the ball means no harm to United as much as one of the midfielders in a much higher position having the ball. We can see Bruno stepping out of his position to press the CB leaving Koch free without a marker in the centre as Dan James now has to sprint centrally to close down Koch. A simple pass from Strujik to Koch would have really opened a lot of options for Leeds but Strujik couldn’t recognize it and United were lucky to escape this. 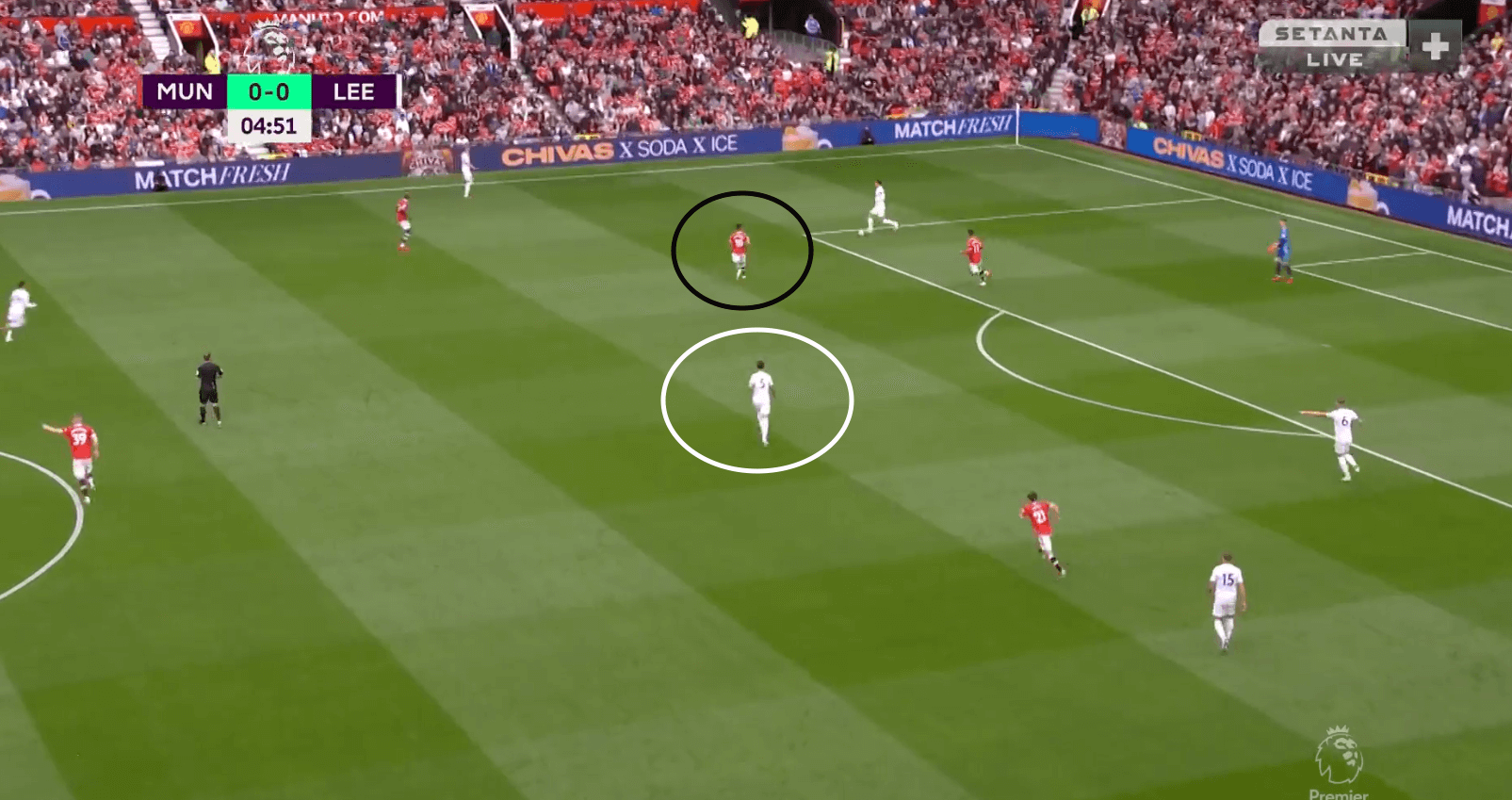 Despite some recurring instances, overall United’s press was very good as they used touchline well and pressed Leeds very well. We can see an example of that in the image below where United go man-man in the wing and when Bamford receives the ball he has options covered while Fred is there centrally to sweep the ball from his zone. This means that United can now start a counter-attack immediately and also from the central regions as we can see Pogba right ahead waiting for such situations. 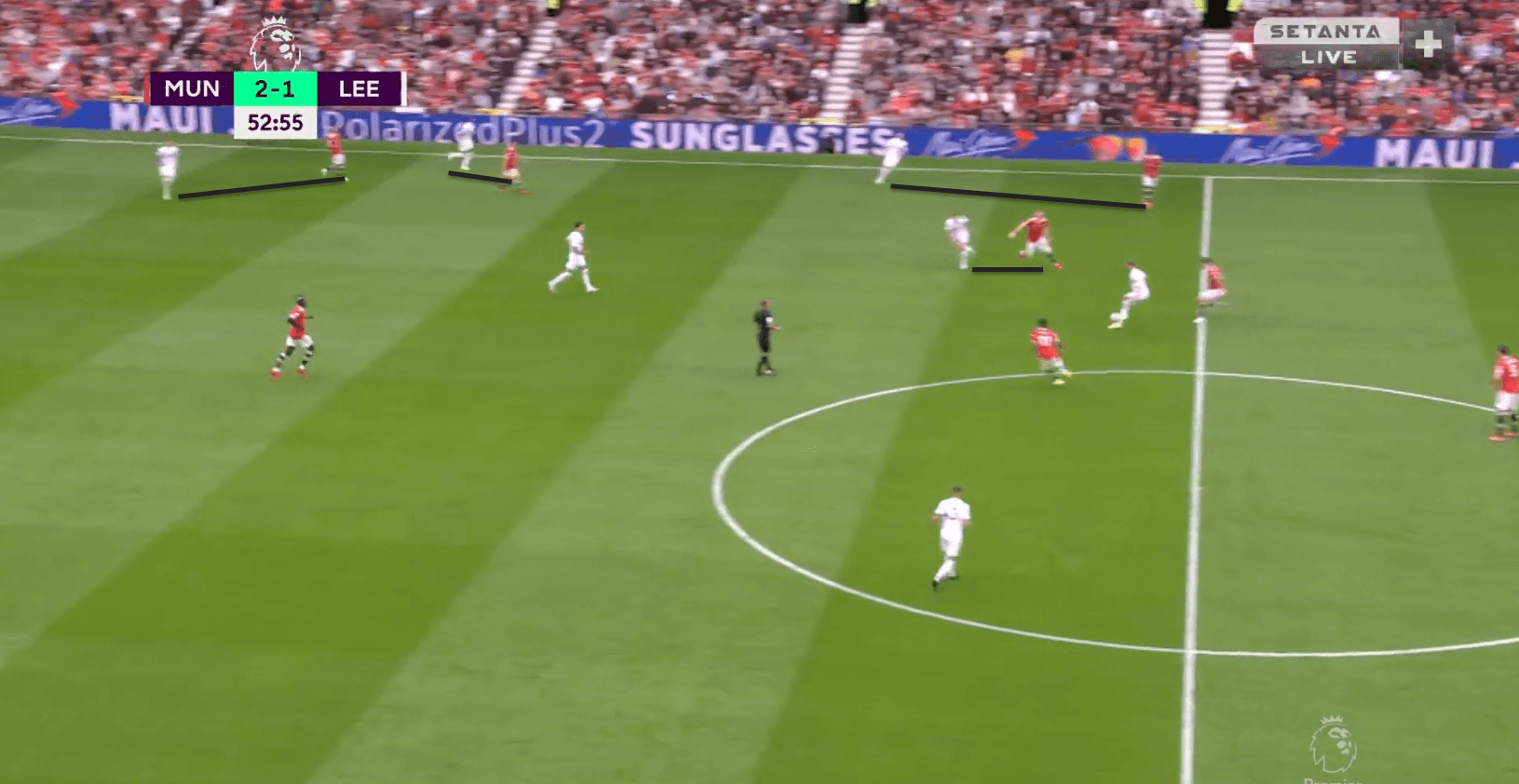 While all went well for United on their opening day, the playing-11 still does have a gaping hole in the form of a defensive midfielder as both Mctominay and Fred are not very convincing as the lone pivot. Both work well in a double pivot but even when they do well they always leave spaces in the centre by jumping into challenges too often and leaving the zone-14 exposed many times. The following image shows the ideal position both should be in when the opponent is in possession of the ball. 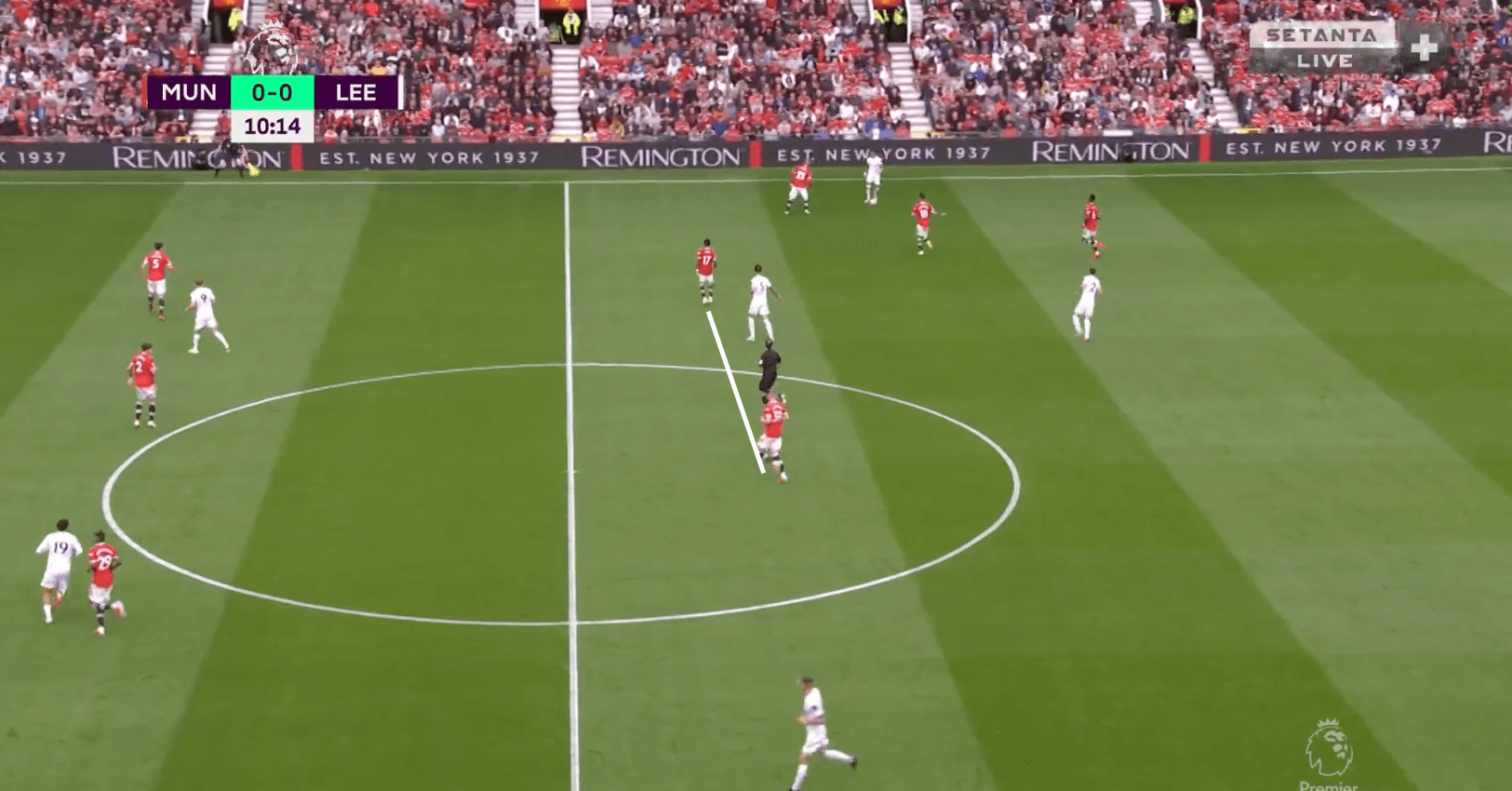 But this wasn’t the case all the time. We can see the image below where Fred had gone up the pitch to attack but Leeds win the ball back. Under transition, Mctominay decides to leave his line and press Rodrigo in the wing while Klich has too much space in front of the defence and is free to receive. He gets the ball and had the opportunity to drive at the defence. Exposing CBs in such a manner is something that no title contenders would do as a CDM would always have to be in the right zone to protect their CBs. 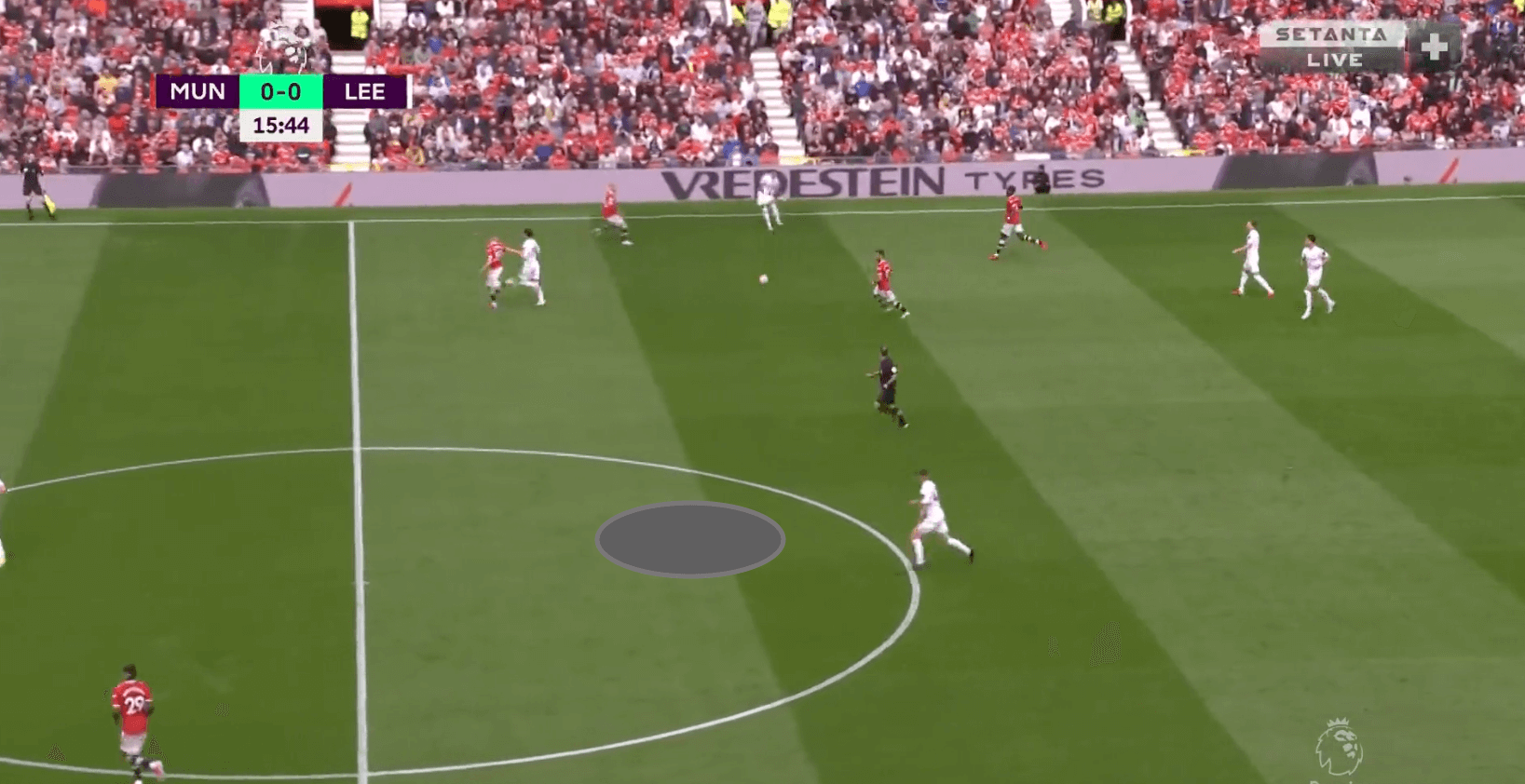 Another example of lack of communication and positional awareness from either of them can be seen in the image below. With Luke Shaw higher up the pitch, Maguire steps to defend the ball at the wings, while McTominay makes the right decision to fill Maguire’s spot. Fred, on the other hand, runs into the same zone as McTominay instead of making a run into the centre while Leeds already have a man attacking the zone-14 with another one coming behind. This again didn’t cost United so much but on any other day against elite teams, it is bound to go wrong. 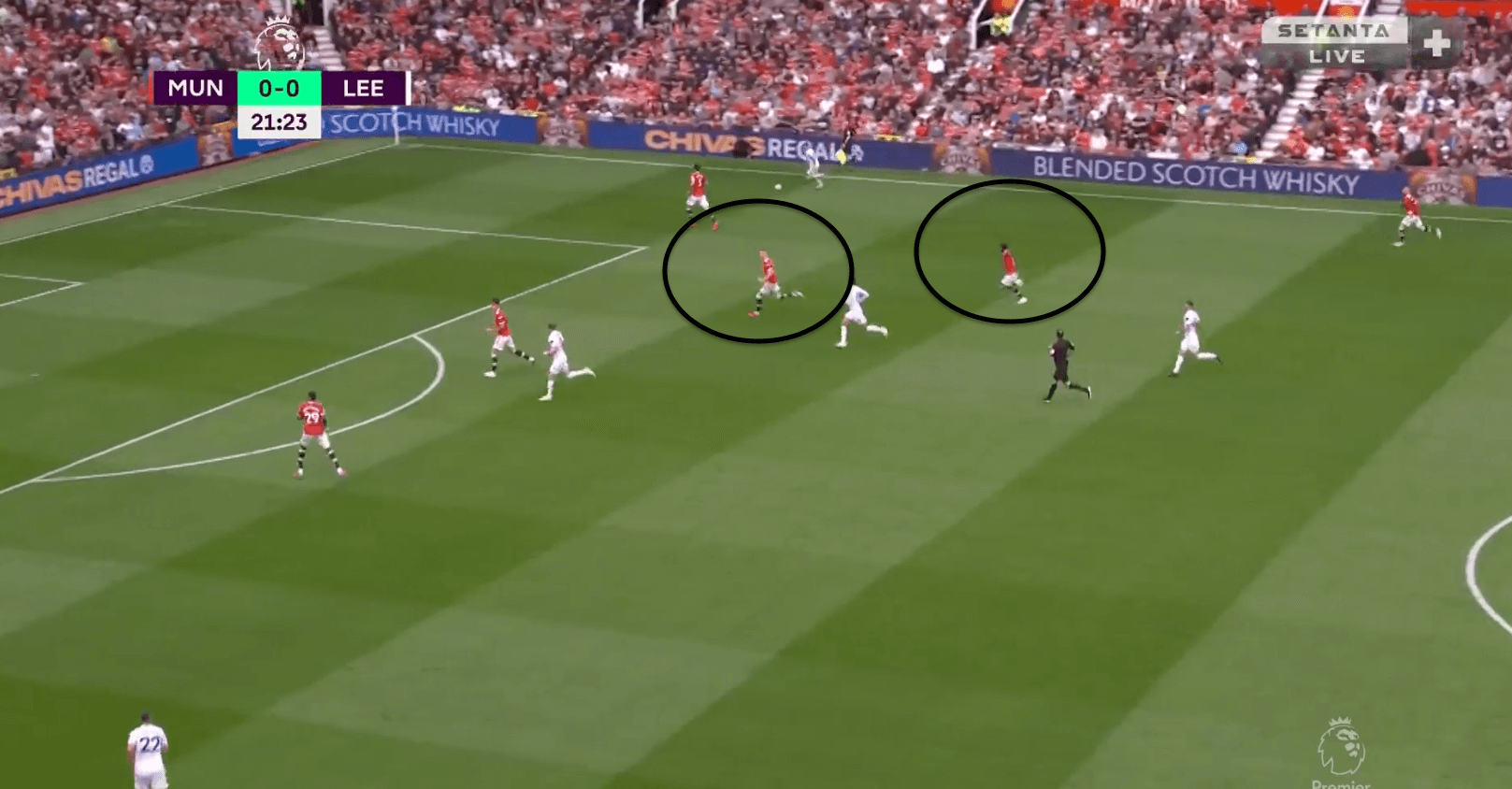 Another example of both of them diving into challenges simultaneously and leaving Klich free in front of the defence can be seen in the image below. 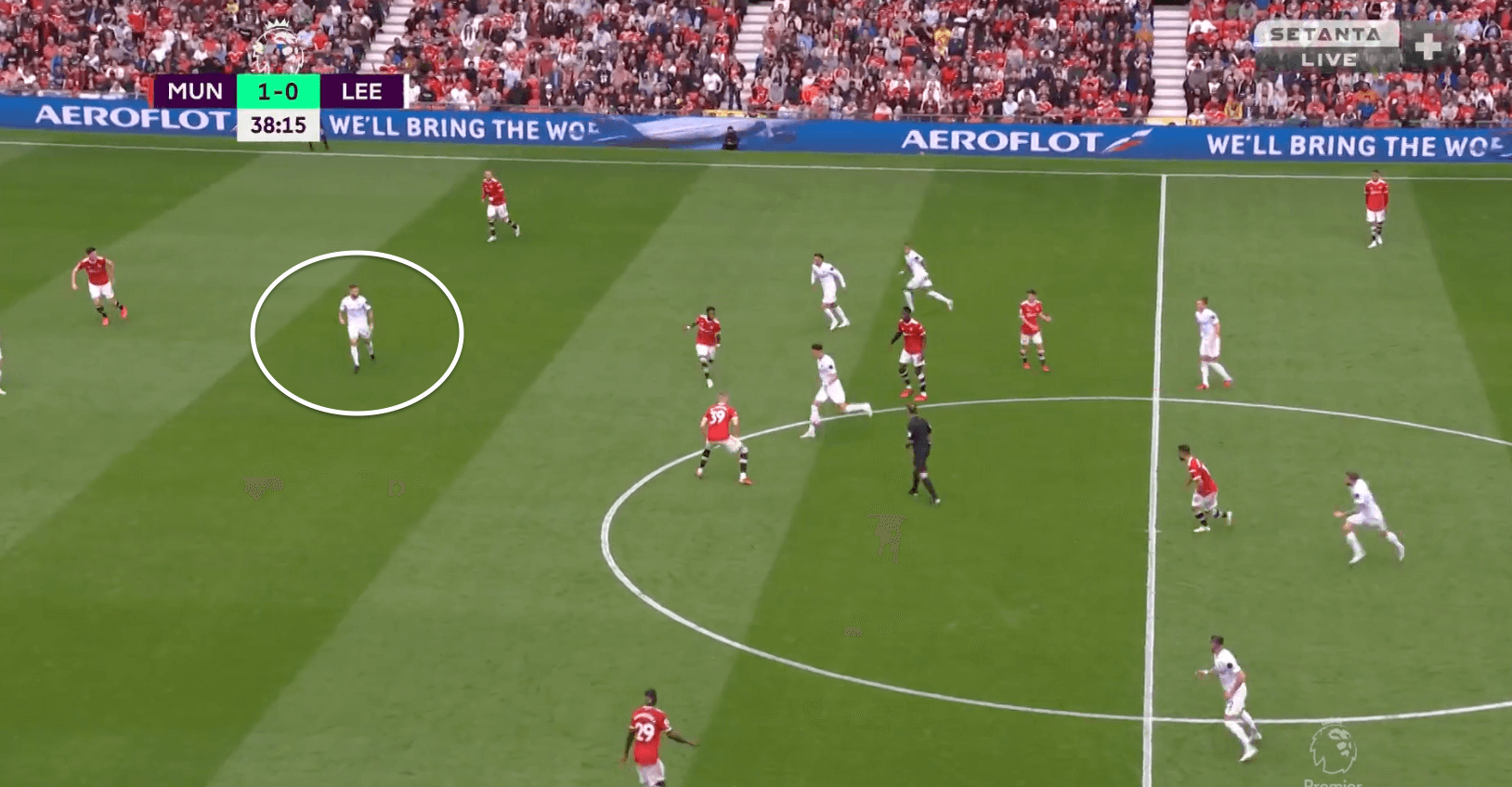 Although most of the above situations didn’t cost them a goal, Leeds’ only goal of the game came as a result of poor spacing between them and leaving the far-side halfspaces open for their rivals to take a shot from. Both Fred and Mctominay have moved to the opposite flank to defend a throw-in as ideally only one of them should have gone. We can see both of them moving very fast to cover the zone but their initial position had cost them the chance to cover the zone. We can say Maguire could have positioned or could have done better in blocking the shot or Luke Shaw should have kept in line without following Raphina but all of those could have been avoided if one of McFred maintained their positioning and ideally Fred in this case. 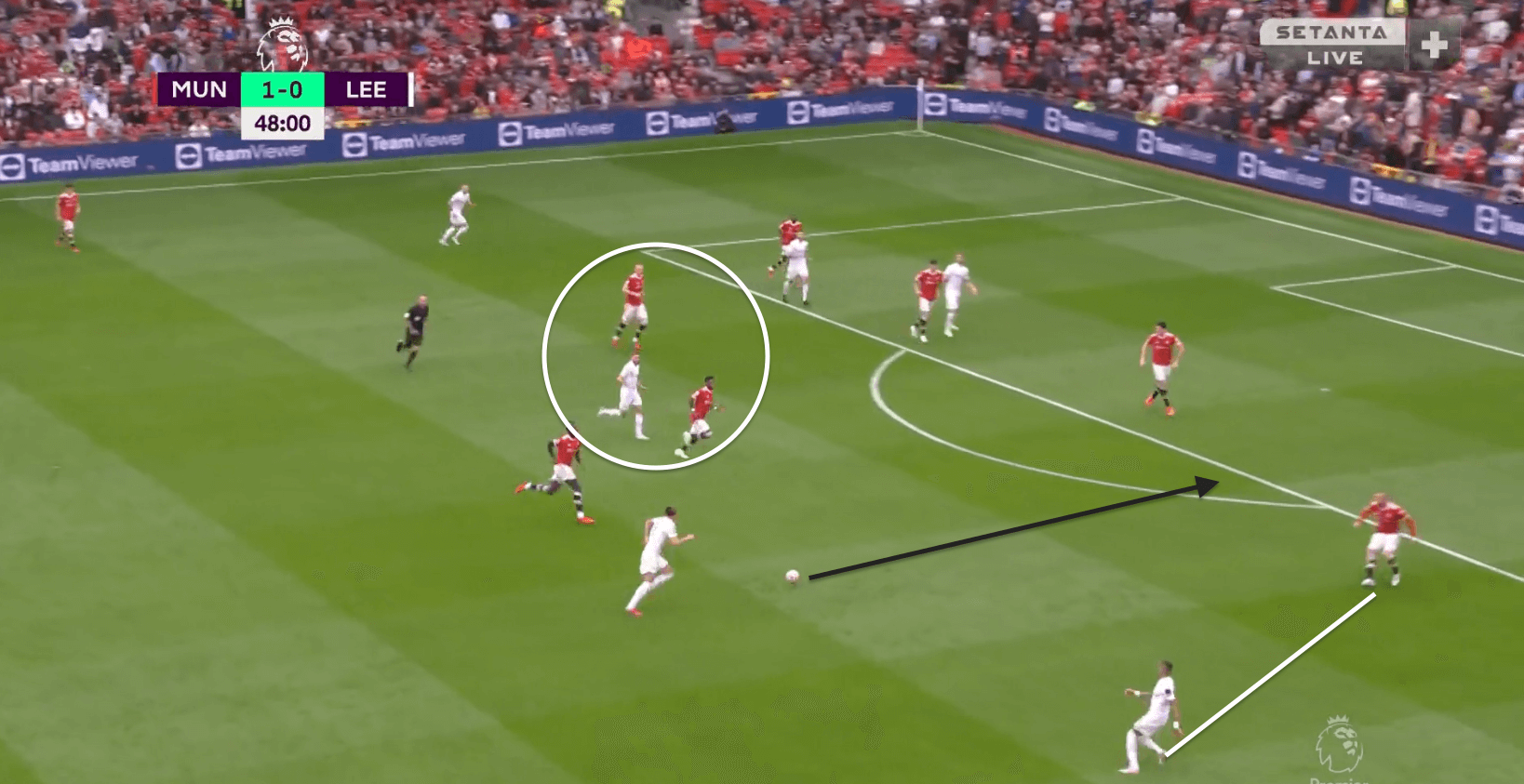 But there were some good signs as to where both of them were as when one of them went up to press the other stayed deeper like in the image below where Fred has himself positioned in a much better place and Leeds now cannot access that space to target the United defence as Fred’s presence could mean a ball loss. 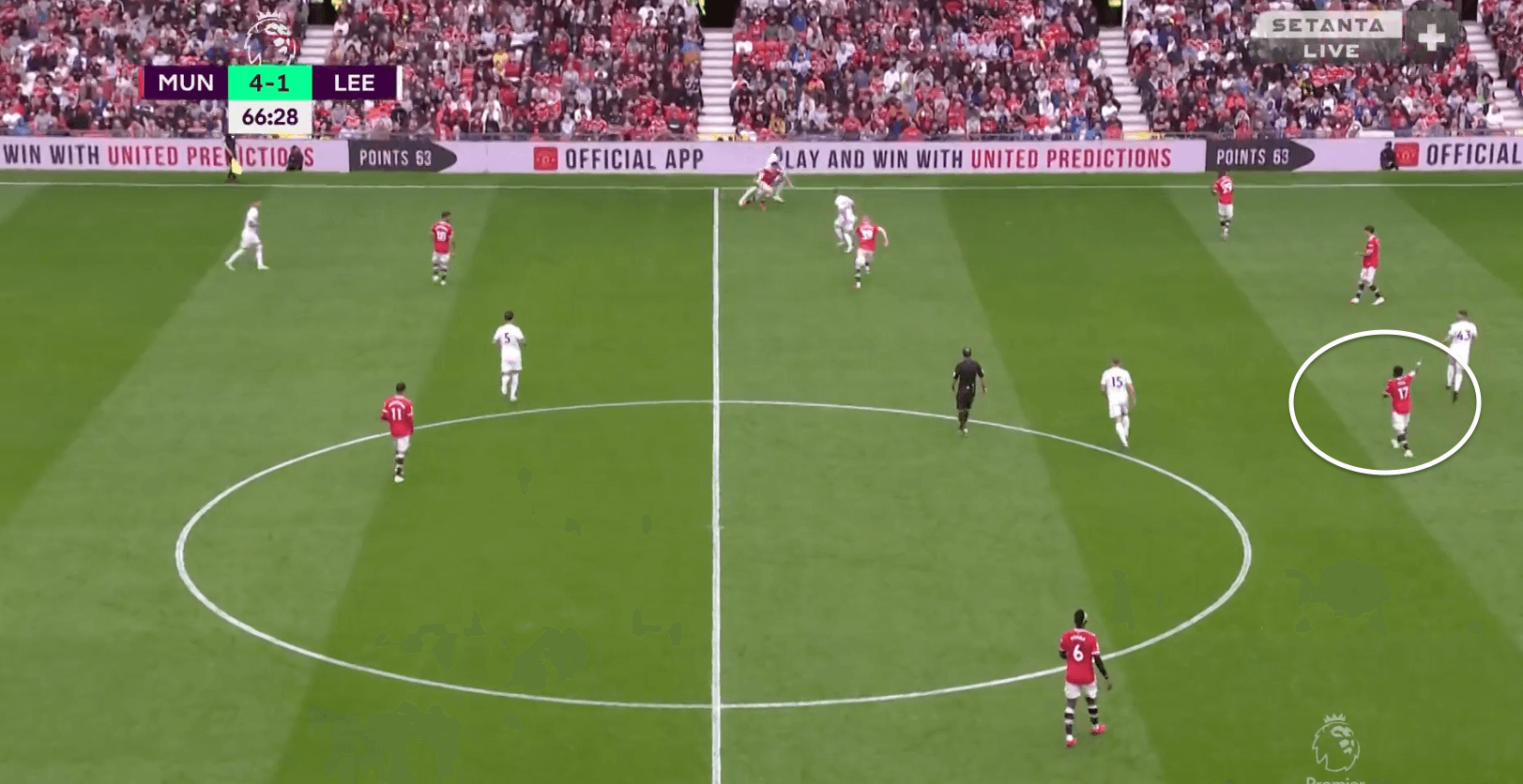 Overall, it was a dazzling attacking display from the Reds especially in the second half as they responded very well to Ayling’s wonder-strike and thrashed their rivals 5-1 to open their account in the new season in style. Though this game did play to United’s strength as much tougher tests against lower block await, the fans of Manchester United should still be buzzing about the new season with two world-class signings in Sancho and Varane and also Cavani and Rashford still yet to make an appearance.

As for Leeds, this was a common theme for them last season, where they looked extremely well in some games and blatantly exposed in others. Bielsa’s men would be looking to bounce back against Everton in their next game.