La Liga 2021/22: How a new-look Barcelona started their post-Messi era with a win – tactical analysis

La Liga is finally back and so are Barcelona. In the first official game in the post-Lionel Messi era, the Catalans managed to scoop up all three points against a largely struggling Real Sociedad side. Ronald Koeman needed to win the game as his biggest rivals in Real Madrid and Atlético Madrid had already tallied their victories beforehand.

This tactical analysis will dissect both teams’ tactics and give you an analysis of how Barcelona beat Real Sociedad.

The big change coming into the game for Barcelona was always going to be the absence of Messi. With the Argentine now officially joining Paris Saint-Germain, it was very interesting to note how Koeman will fill his void. But he wasn’t the only absentee. Marc-André ter Stegen was replaced by Neto and Gerard Piqué formed a centre-back partnership with the newcomer, Eric García.

The midfield was pretty standard with no surprises while the front three consisted of Memphis Depay, Antoine Griezmann and Martin Braithwaite. Barcelona were deployed in their traditional 4-3-3 formation. 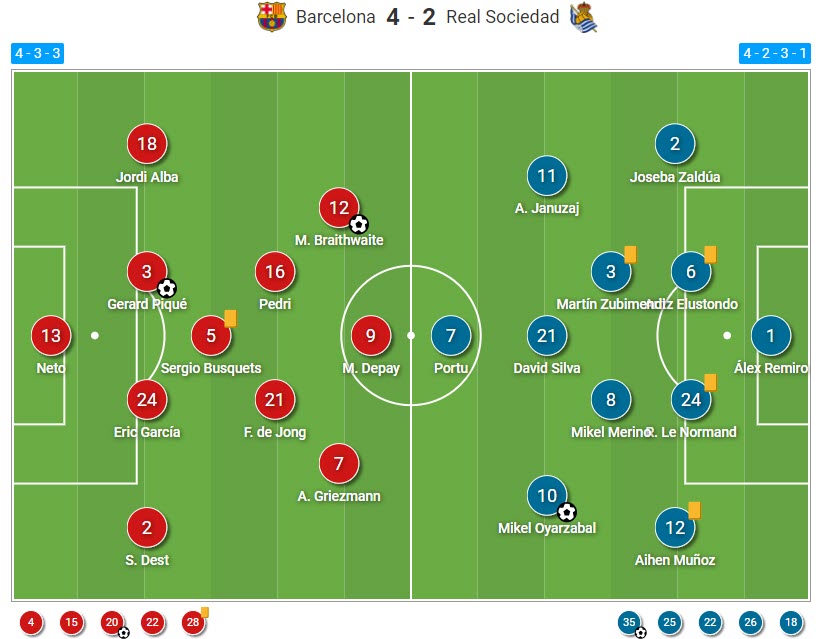 Real Sociedad, on the other hand, had most of their big guns available as all of their Olympians made a successful return back to the squad. However, the most notable absence was that of Alexander Isak, and in so many ways, that ended up hurting Imanol Alguacil’s team a lot.

The rest of the squad was still formidable as Portu led the line with Mikel Oyarzabal, David Silva and Adnan Januzaj following closely. Mikel Merino and Martín Zubimendi were the wall ahead of the back four and Álex Remiro in that 4-2-3-1 system but as a whole, they couldn’t contain Barcelona for the majority of the game.

Even though Barcelona’s attacking tactics were quite impressive, which we’ll discuss later on in this tactical analysis, Real Sociedad’s defensive organisation was poor overall. Agluacil’s tactics off the ball usually involve a very aggressive and usually very effective high press and at first, it seemed their La Liga opener would be no different.

Real Sociedad deployed a heavy man-marking scheme, effectively mirroring Barcelona’s structure in possession and matching them man for man. The big point, however, was also the fact they pressurised Neto almost at all times, banking on his insecurities on the ball. He is decent in possession but also a far cry from Ter Stegen. 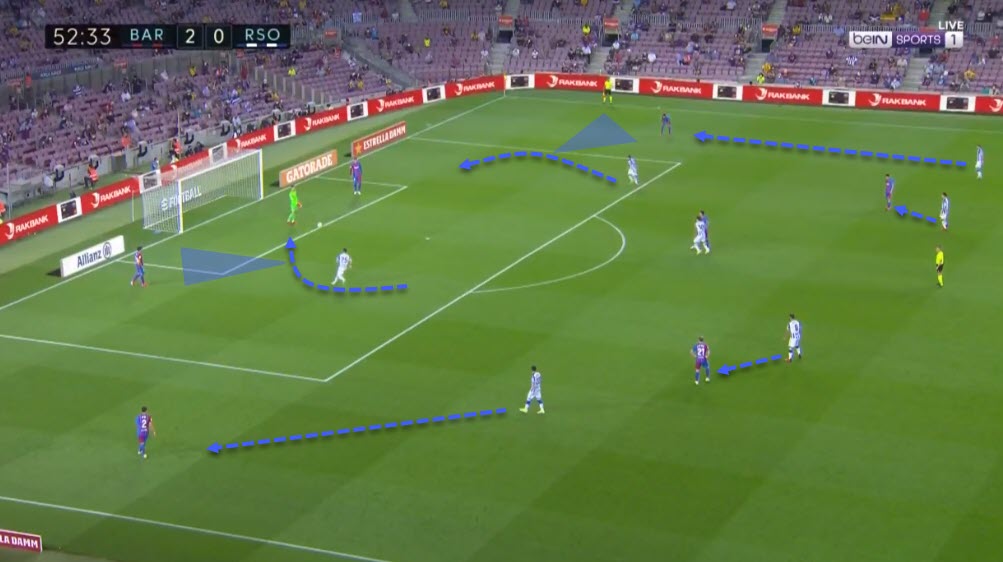 Above is an example of a very default Real Sociedad high man-marking press. The two highest players would press the centre-backs but also curving the runs so that they use their cover-shadow to shut down potential passing lanes. This would force Neto into complicated situations and ideally into errors.

However, both their press and a deep/mid-block were largely faulty and leaky. Let’s examine a couple of examples of this. In the first image below, we can see their high-press tactics but notice how the man-marking aspect of it, especially with the midfielders, is liable to manipulation. 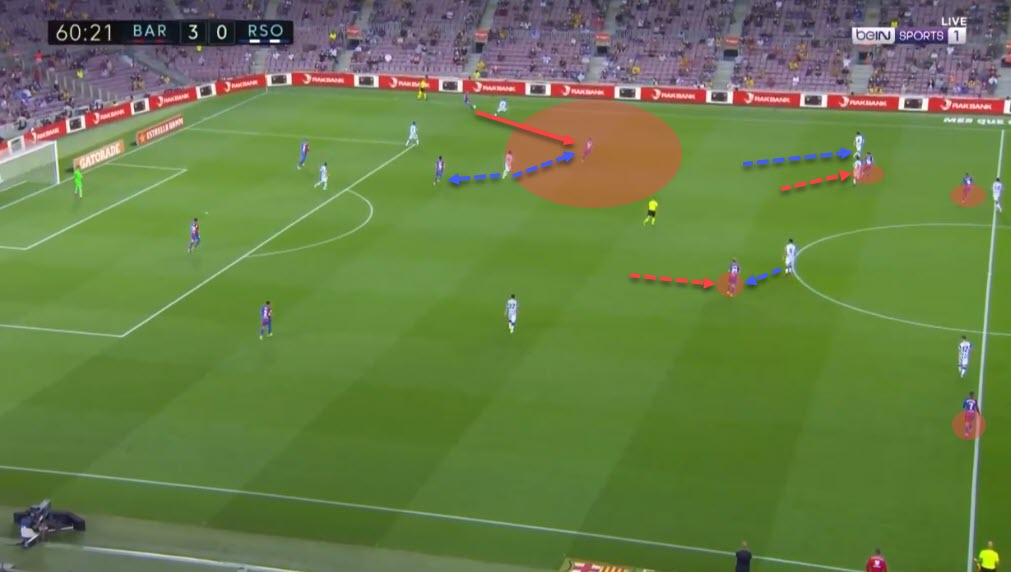 Since their midfielders would track their counterparts vigorously, Frenkie de Jong and Pedri’s aggressive runs forward almost always dragged their markers away. Griezmann and Depay’s high positioning also pins the backline and forces them to stay deeper. As a result, we can see a huge gap appearing between their lines, which is here exploited by Braithwaite.

Barcelona easily access the space behind the first line of Real Sociedad’s pressure and then use that to advance up the pitch. Even if it doesn’t yield them a shot on goal, it still wins them territory and progresses the ball.

Unfortunately for the guests, the same was true for their mid/low blocks. Below is another example showing us similar tendencies we just discussed. 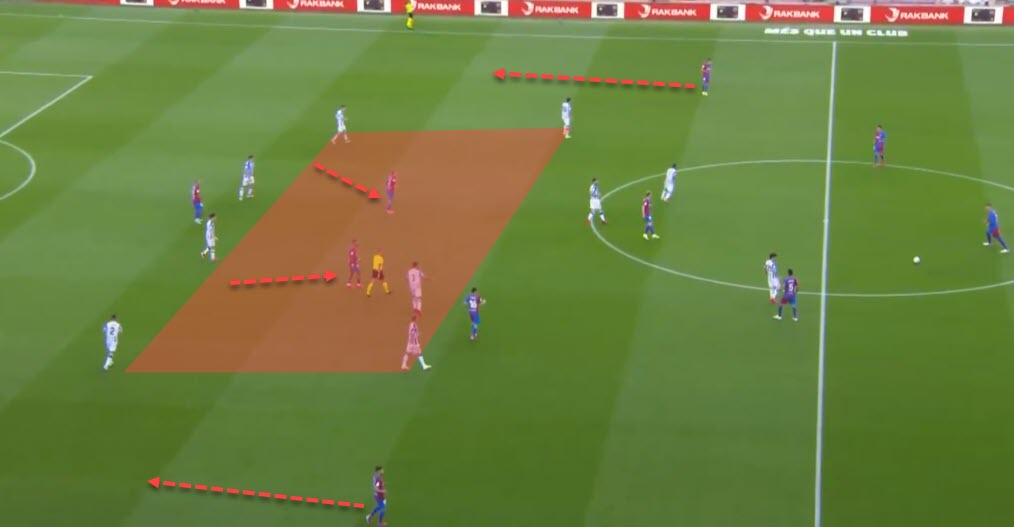 This time, however, it’s the midfield and the forward line getting dragged further up the pitch while the pinned backline has to stay deep. Memphis and Griezmann then drop between the lines and can receive the ball in acres of space, gifted to them by Barcelona’s great movement manipulation.

And these tactics were used throughout the game, albeit in different situations. We’ve mentioned how the idea behind Real Sociedad’s high press was to force Neto into mistakes. And while he’s not elite with his feet, the goalie had clear target men up front in Memphis and Braithwaite.

Neither of them are extremely effective in those roles but Barcelona consistently used them to bypass the press through long balls and then scooping up the second balls even if the aerial battle was not won. Looking at the data below, we can see that the statistics support this thesis and confirm their tactics. 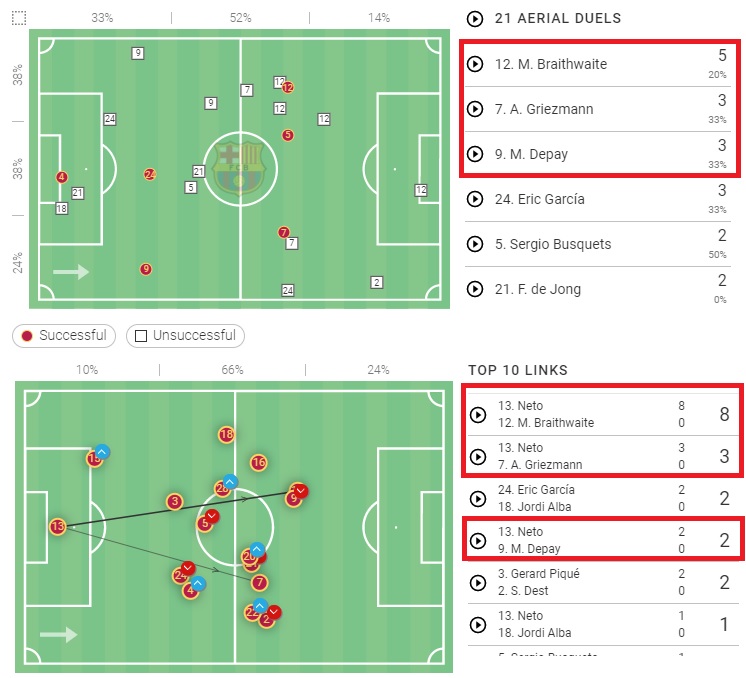 Neto’s long balls were largely aimed at the front trio and while they were far from successful in winning every single duel, the graphic suggests it was indeed a way for the Catalans to progress the play. Again, they would use movement manipulation to give themselves a high chance of success.

The midfielders would drop deeper, dragging their markers with them and isolating the forwards in a 3v3 scenario up front. After that, Neto would go fishing for one of them, preferably Braithwaite, and deploy a long pass into the final third.

On a couple of occasions, this even produced a fairly dangerous sequence that wouldn’t have been possible had it not been for those specific profiles of players featuring in the game. Below is such an example.

Midfielders drop and drag markers, creating a void between the lines while Neto finds Braithwaite isolated in a 1v1 duel with a long pass. The ball is then laid off to Memphis on the other side and Barcelona continue the attack.

The biggest question mark hovering over Barcelona heading into the new season was how they would perform without Messi in attack. How do you even replace a man with 937 goal contributions over 778 games, fetching you 35 trophies in that otherworldly run? The truth is that you don’t but against Real Sociedad, Barcelona showed us a glimpse of what the post-Messi era can become if they continue improving and performing like that.

All three of Memphis, Griezmann and Braithwaite were brilliant on the night, demonstrating flexibility, dynamism and coordination. While they all had their own roles and tasks to play, the interplay between them was the most interesting aspect to observe.

Above is a touch map for all three of them, explaining the areas in which they operated and hinting at their roles, both for that night and potentially moving forward. Memphis was the most dynamic and free of the three, effectively enjoying being the hub of Barcelona’s attack. Everything went through him, and quite deservedly so.

The Dutchman was the main creator and would influence play across the pitch, offering runs, link-up, playmaking and threatening the goal himself, albeit without a final product bar that set-piece assist. Speaking of free roles, Griezmann had a very similar task himself.

As can be seen in the graph above, he occupied the areas to the right and intriguingly, operated in positions that would usually be off-limits for him due to Messi’s presence. Braithwaite was also very flexible, providing width and runs when necessary while also being an effective target man and lay-off option too. But how exactly did that three-way relationship work?

The premise was very simple – against Real Sociedad, Barcelona always had runners ready to threaten the backline, which is something they were lacking for a long time. When one of the front three drops, the other two stay high. If two drop, one pins the centre-backs and is assisted by the full-backs. In most cases, this gives them attacking options in almost all scenarios. 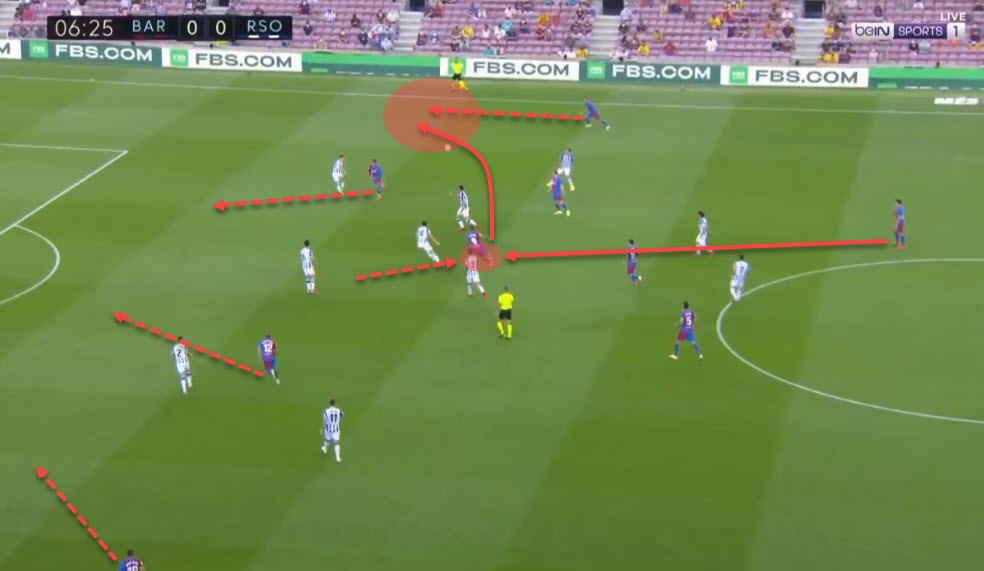 Let’s start with Depay dropping deeper. As soon as he receives the ball from either the backline or the midfield, the other two players make a darting run behind the opposition’s defensive line. The Dutchman flicks the ball over to the flank towards the full-back and then immediately starts his run towards the box.

The same was true regardless of who was the one dropping deeper as all three swapped positions and roles regularly, making them very difficult to track, mark and ultimately intercept. Below we can see Griezmann doing the same thing.

His movement immediately triggers the runs of both other forwards and the Frenchman swaps sides as Barcelona progress the ball into the final third with speed. 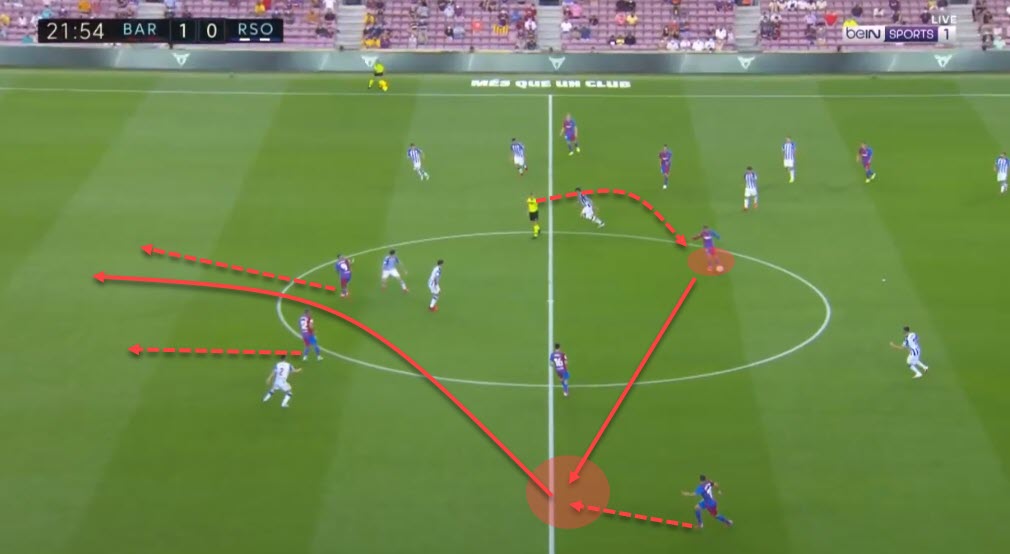 Finally, the same can be said for Braithwaite, whose playmaking ability is not at the level of the other two, but it was the movement that opened so many doors for the Catalans. The Dane would drop but not with the aim to deliver the final pass himself but rather to move the opposition with him or to give his teammates a different angle to exploit space behind the backline.

Braithwaite, however, was the obvious benefactor of these tactics as it was usually him who got on the end of passes, crosses and acres of space. 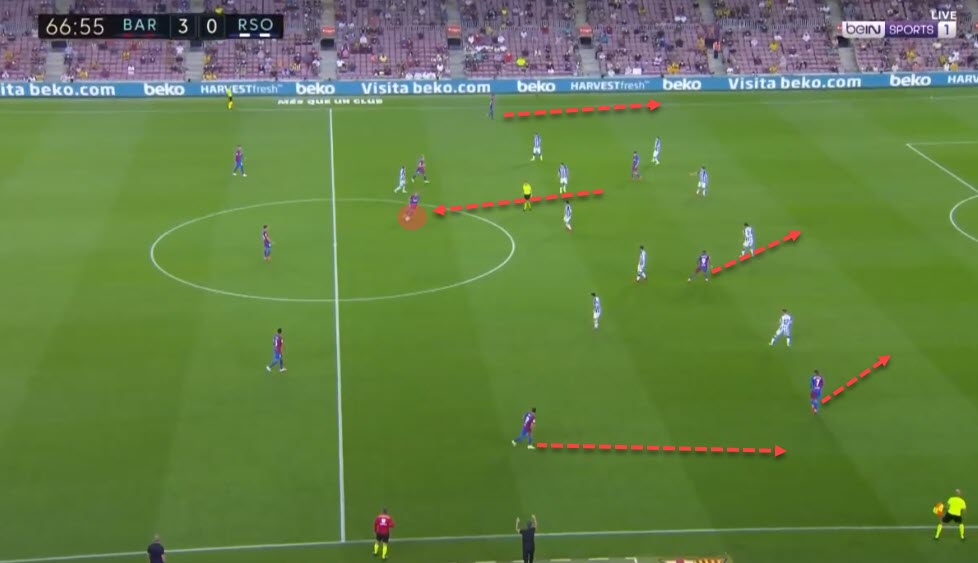 What’s so special about this system is that it has no natural wingers and practically no natural strikers. Even though Braithwaite is one on paper, his role was far more broad and flexible than that of an out-and-out #9.

Whether this is sustainable going forward and whether it will work against more solid opposition remains to be seen but the initial experiment was a success, to say the least.

Even though they almost bottled another 3-0 lead, Barcelona got the job done and started off their post-Messi era with a victory. Koeman will certainly be happy with the result and more or less with the performances across the squad.

Alguacil, on the other hand, should go back to the drawing board as his team’s display, especially in the defensive aspects of the game, was full of holes and needs a fix as soon as possible.