La Liga is almost back, as is club football across Europe. Before long, we’ll be seeing the likes of Barcelona and Real Madrid back in action after an exciting summer full of twists and turns. This week, however, we’re continuing with our data analysis looking at the best young players the Spanish top-flight has to offer.

After finalising our analysis on both defenders and midfielders, today’s piece will look at the statistics of forwards and attacking midfielders. Who are the players to take over the likes of Luis Suárez and Karim Benzema? What will the life after Lionel Messi look like? Let’s find out.

Before diving into the data analysis, it’s important to set the filters and explain the statistics we’ll be working with here. Once again, due to the U23 pool of young forwards who have played at least 500 minutes in 2020/21 being insufficient, I’ve had to expand it by including U24 players too.

Similarly, for the defensive metrics, I’ve calculated the possession-adjusted (PAdj) metrics myself wherever needed and have taken all data provided by Wyscout. Other categories include goal contributions, finishing, attacking actions, creativity & involvement and transitions. 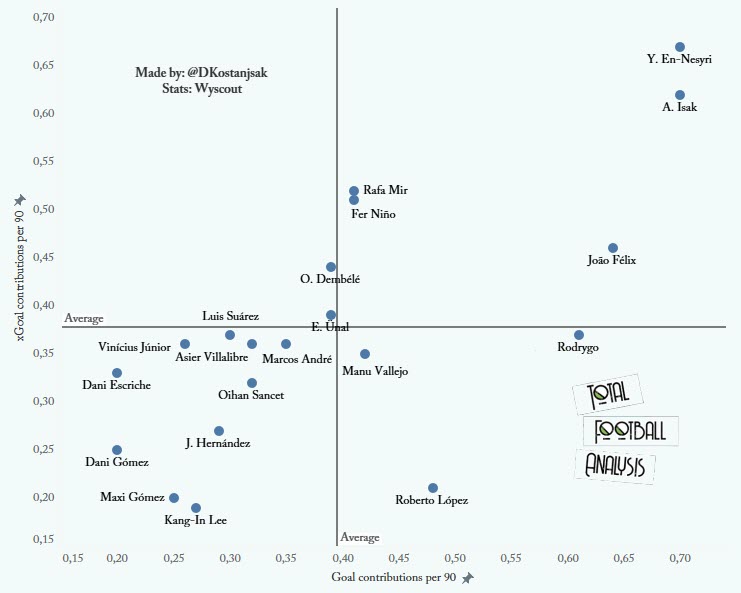 While the players in the top-right quadrant are certainly among the most impressive young forwards in LaLiga, it is key to note that extremes are not always a good thing in this category. For instance, too big of an overperformance is often unstable over a larger period and players who tend to find themselves in the bottom-right and/or generally topping the x-axis more than the y one are in that category.

Huesca’s Rafa Mir and Villarreal’s Fer Niño have both underperformed their xGA metrics (0.41 from 0.52 & 0.41 from 0.51 respectively), signalling there’s room for improvement in their finishing, while Atlético Madrid’s João Félix is among the biggest overperformers on the chart (0.64 from 0.46).

Next, we’ll take a closer look at finishing and penalty area activity by measuring shots per 90 and touches in the box per 90 while also analysing goal conversion % (colour). Again, the top-right quadrant is not necessarily the best scenario here. 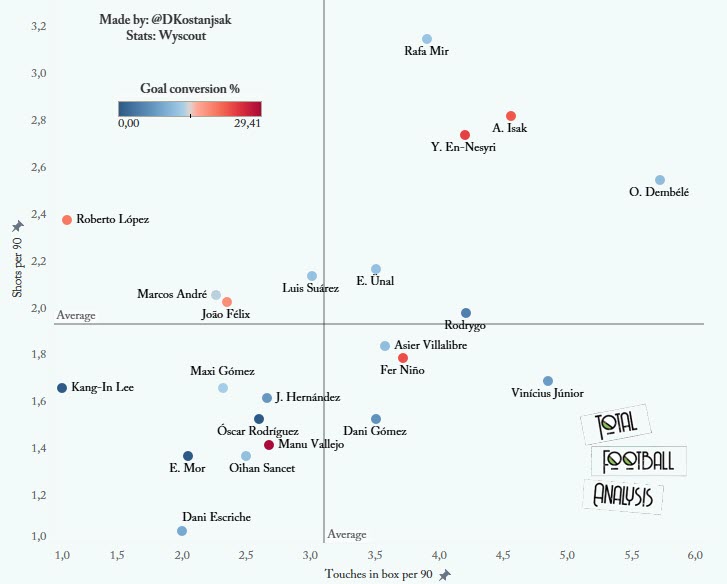 Players in that area tend to take a lot of touches inside the box and also shoot quite often. That is not necessarily better than players shooting with few touches, as long as their accuracy and conversion are good. With that in mind, again, Isak and En-Nesyri are the clear outliers. La Real’s star recorded 2.82 shots and 4.56 touches in the box per 90 with an incredible 22.37% goal conversion.

Next, we’ll tackle offensive duels per 90 and successful attacking actions per 90, which are defined as the sum of shots on target, accurate crosses and successful dribbles normalised per 90 minutes by Wyscout. 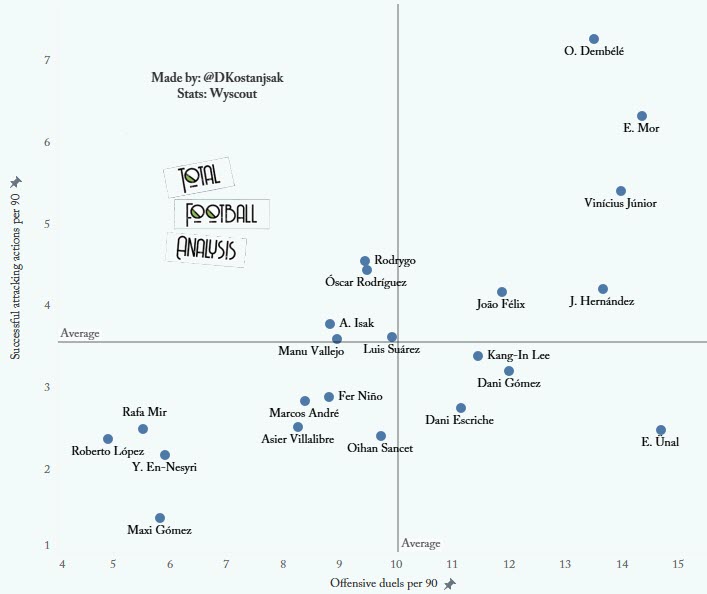 We have to note, however, that being above average in either category is a positive sign for the overall offensive play, albeit not a be-all-end-all measure for it. So for instance, the likes of Isak, Rodrygo and Óscar Rodríguez excelling in one metric but not in the other doesn’t instantly lower their overall quality.

Our next graph measures creativity & involvement through passes into the penalty area per 90 and deep completions per 90, which are defined as non-cross passes that are targeted to the zone within 20 metres of the opponent’s goal by Wyscout. 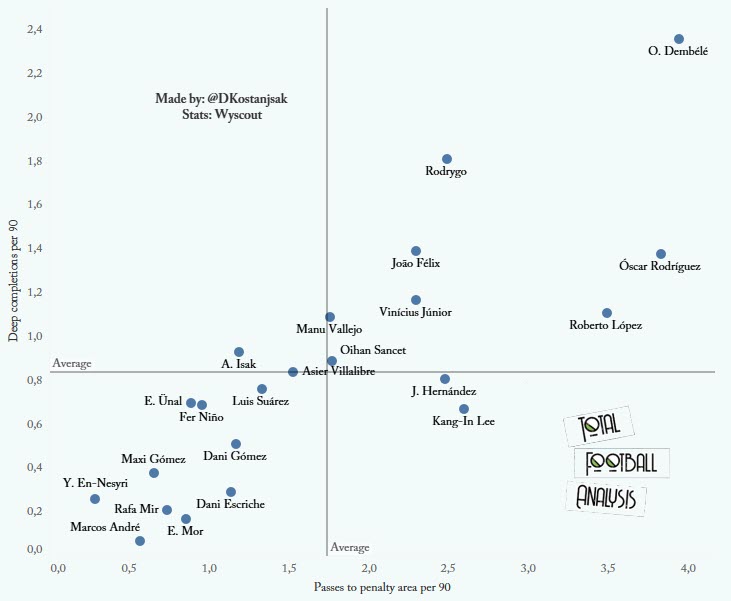 Here, we have to be wary of team styles and tactics. Players at teams with higher possession tallies might fare better in this metric purely because they see more of the ball and have a better chance of recording passes in the first place. However, it’s still indicative of style as players who tend to be more involved will drop outside of the penalty area to create and pass more often.

Those are players such as Dembélé, Rodrygo, Félix, Rodríguez and López. However, this category favours wingers and attacking midfielders as they are more likely to send passes outside of the penalty area than strikers are. Even the more ‘modern’ and versatile forwards like Isak seem underwhelming on the chart while in reality, they can progress play and be creative.

Next, we’ll look for players who thrive in transitional scenarios through accelerations per 90 and dribbles per 90. The percentage of successful dribbles is also shown with the colour of the dots. 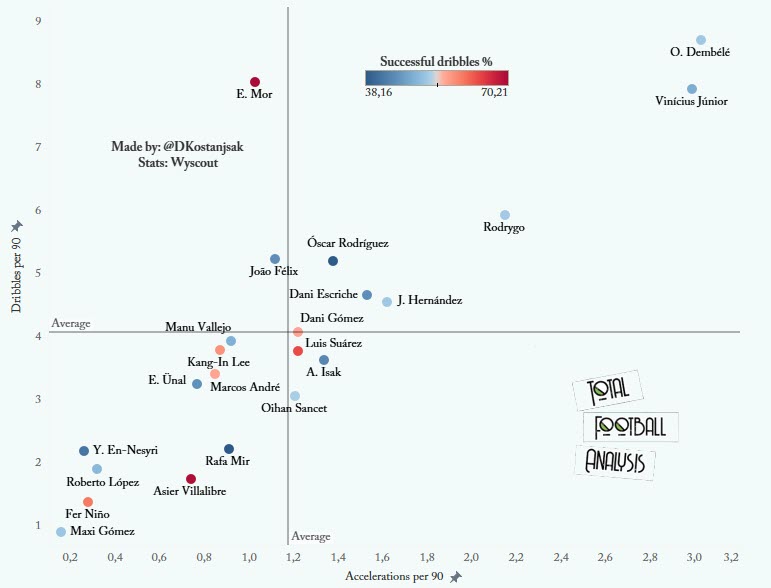 In the top-right we can see players who like to run with the ball and use pace to progress play and beat defenders. Similarly, they are the volume dribblers who value attempts over efficiency and will breach the block by constantly trying. All three of Dembélé, Rodrygo and Vinícius are excellent examples of this as all are fast dribblers with relatively low success rates.

On the other hand, players like Mor and Félix are technical and good dribblers but usually don’t make significant runs with the ball. Oihan Sancet, Isak and Suárez make runs but don’t engage in dribbles as often while still being capable of beating the marker.

Finally, we’ll touch upon defensive work-rate and involvement by measuring possession-adjusted (PAdj) defensive duels per 90 and PAdj successful defensive actions per 90, which are defined as the sum of defensive duels won, interceptions and sliding tackles normalised per 90 minutes by Wyscout. 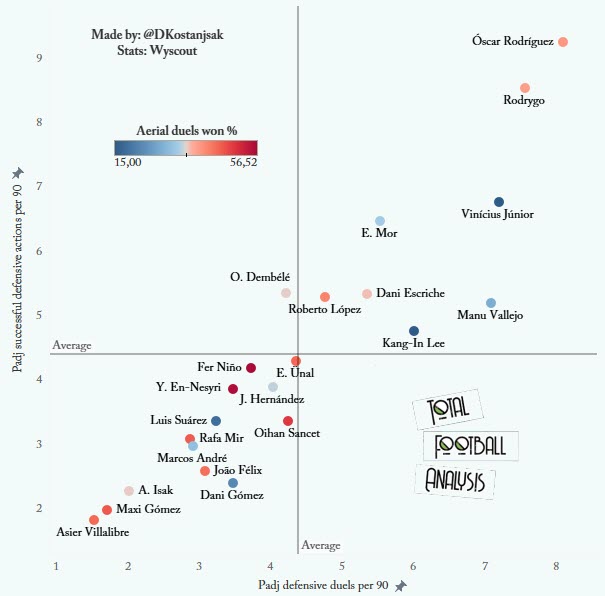 The former gives us an outline of how often a player engages in a challenge and the latter compiles all defensive actions and gives us only the positive outcomes. Additionally, the percentage of aerial duels won is shown through the colour of the dots. All the players in the top-right quadrant are the ones to look out for as they are the individuals tallying high values in both metrics, displaying both volume and proficiency.

Vinícius is another willing defender here with 7.19 PAdj defensive duels per 90 and 6.77 PAdj successful defensive actions per 90, albeit with a lower aerial proficiency (15%). There are more here but these three are the clear standouts.

However, will it be enough to warrant them a spot in our three-man shortlist? Let’s find out.

The shortlist will include three players with profiles compared to the rest of La Liga forwards and attacking midfielders (percentiles in the bar graphs, per 90 values in the tables below) across all age groups. 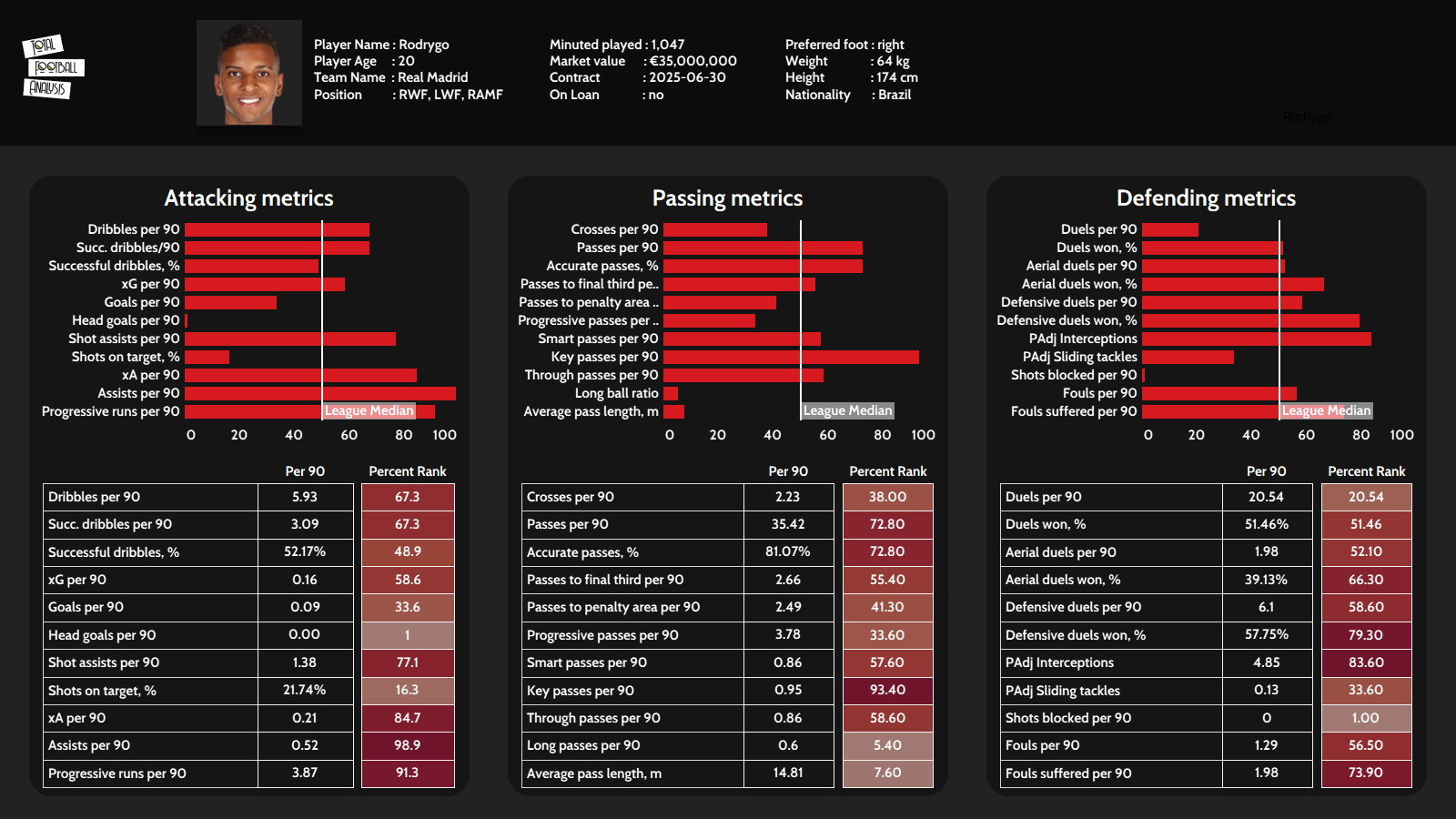 While in no particular order, Rodrygo is the first player we’ll mention on our shortlist. The 20-year-old Brazilian has proven to be a top contender across the board, making an appearance among the top players in multiple measured metrics. Real Madrid’s ace has been one of the biggest expected goals overperformers last season in LaLiga but his finishing seems to be on a decent level already.

Generally, compared to the rest of U24 forwards, he’s above-average in both shots and touches in the box per 90 and despite huge overperformance in xG, his goal contribution is still low so there is indeed room for improvement.

However, considering he’s very successful in his attacking actions, involved in the build-up & creation while also boasting pace, unpredictability and defensive work-rate, it was hard not to include him on our shortlist. 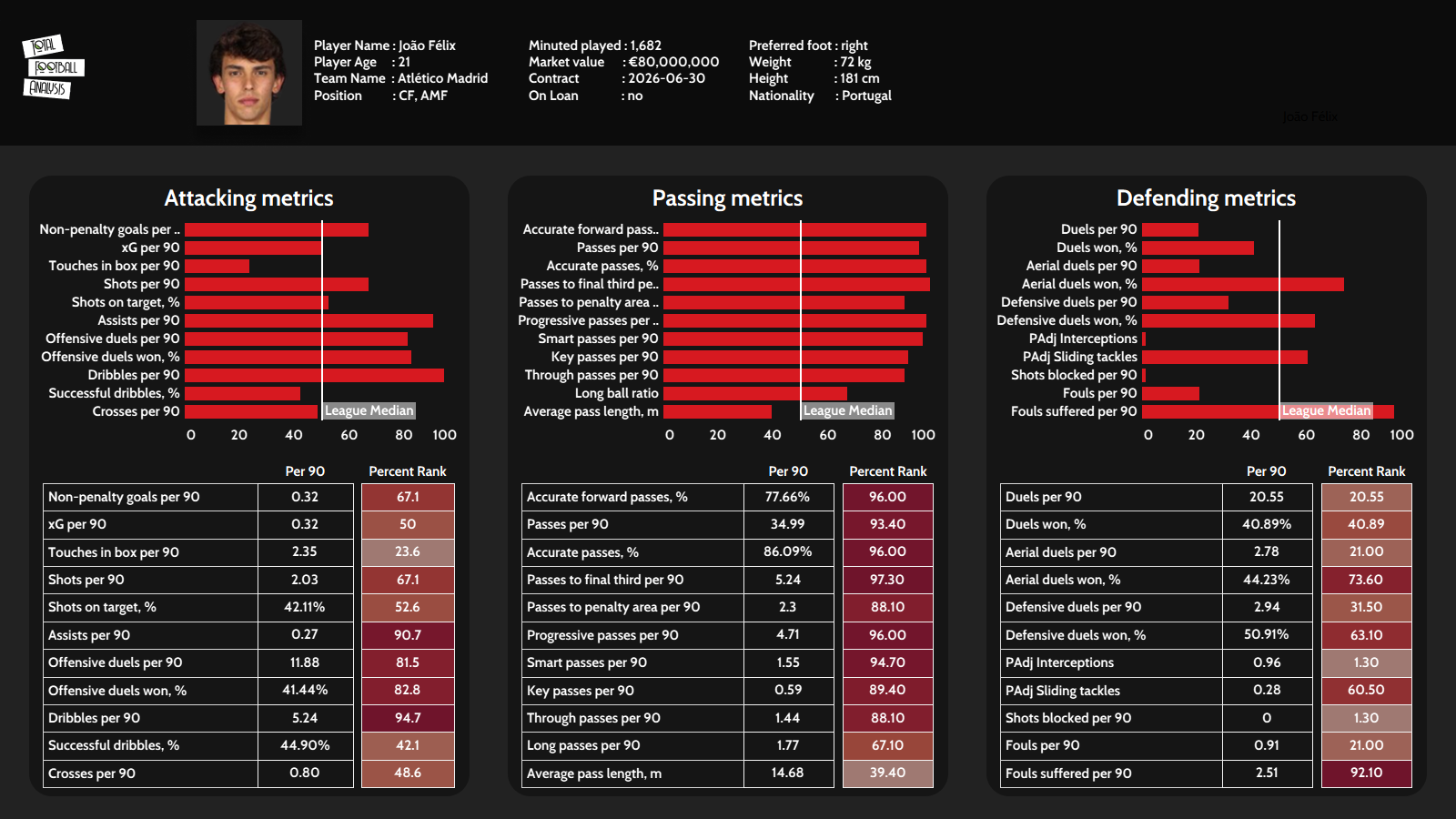 And while we could argue much more was expected from João Félix last season, while he was fit, the young Portguese star gave us a taste of his undenying potential. Even with slightly less game time, he was still able to impress in most of our analysed categories.

Just like Rodrygo before him, Félix has overperformed his xG in a rather unstable fashion but seeing how his goal conversion rate sits at a very high 18.42%, despite tallying an above-average number of shots with low touches in the box, we can say his finishing has been great. Similarly, he is very attacking-minded and creative in possession with an ability to beat his man and progress the ball.

Defensively, he may not be as involved as one might expect from Diego Simeone’s player but Félix ticks some of the most important boxes a player of his profile should tick. 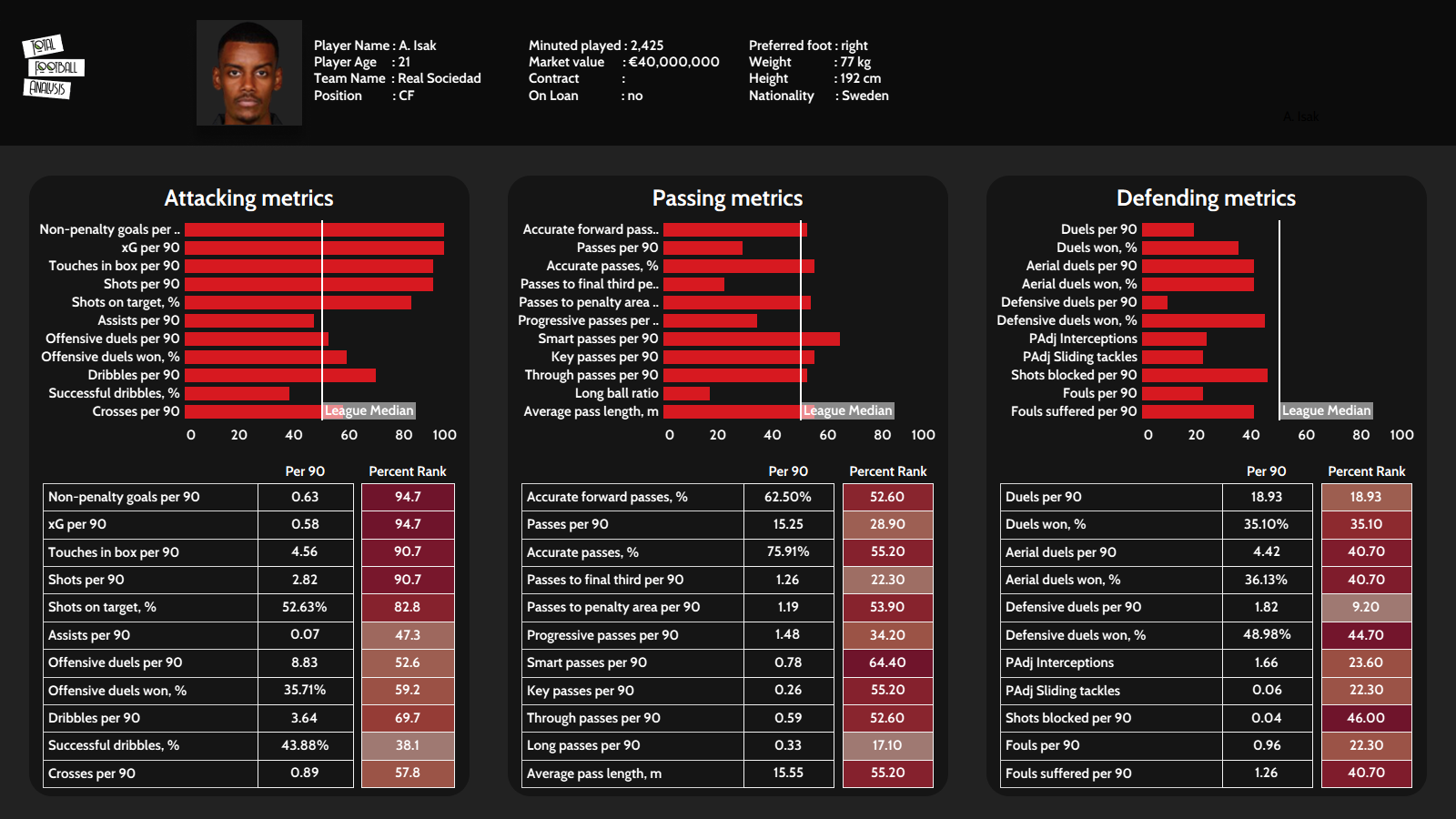 Probably the most expected name on our shortlist is that of Real Sociedad’s Alexander Isak. At the moment, he seems like the player to lead LaLiga’s next generation of superstars and is surely one of the most exciting forwards Spain have heading into 2021/22.

And while he wasn’t a clear outlier in every single category, as was perhaps expected to a certain extent, Isak tops the charts where it matters. When it comes to pure finishing and positioning, he almost has no equal among the young players. Similarly, he will engage in and win attacking actions while also being creative enough to register above-average deep completion figures.

The 21-year-old may not be the best dribbler but has the ability to run with the ball from deeper areas and win space for his team. How long can La Real hold onto such a big talent?

Looking back at the analysed charts, it was difficult not to include Ousmane Dembélé on our three-man shortlist. The Frenchman has had bad luck with injuries and inconsistencies but has still managed to impress almost across the board. One thing working against him in this scenario, however, was age. As we aim to include younger players, everyone under 24 was given a slight boost in our rankings.

But this doesn’t take much away from Dembélé. He’s been a top performer and one that’s shown on almost every chart. While the 24-year-old winger may have underperformed his xG values, he was able to muster above-average expected figures and almost crossed the average line in the real contributions. When it comes to shots and touches, he ranked almost at the very top and the same was the case in offensive duels and attacking actions, illustrating his willingness to engage the opposition.

Needless to say, he’s also very creative and incredible in transitions while his defensive work still leaves something to be desired.

Another player unlucky to not have made the shortlist is Real Madrid’s Vinícius Júnior. The Brazilian is in so many ways similar to his teammate Rodrygo but it’s his finishing and general performance in front of goal that sets them apart. While the younger of the two boasts a massive overperformance and manages to stay above the average line in shots and touches, Vinícius struggles to replicate that.

Yes, he seems very active inside the box but simply isn’t pulling the trigger often enough and when he does, it’s mostly inaccurate as his 7.69% conversion rate suggests. However, once you look past that glaring weakness, Vinicius is indeed a brilliant young talent.

He’s quick, creative, technical, unpredictable and even defensively very solid and hard-working. If he can polish his shooting, he may go on to become a big star in the future.

The final name on the honourable mentions list is Real Sociedad’s Roberto López. Similarly to some other players who featured, the 21-year-old hasn’t been a clear outlier in most of the analysed metrics. However, at such a young age and with limited game time, it was difficult for him to properly make a case for himself.

But with a decent base and good underlying values in some core metrics such as goal contributions (despite high overperformance), finishing, creativity and defensive solidity, he’s certainly warranted at least a mention on this list.

Whether he can take this potential and turn it into something more palpable and consistent remains to be seen but the early signs are good.