The 2nd game week of the 2021/22 Scottish Premiership saw defending champions Rangers travel to Dundee United to take on the Tangerines in their own backyard. Steven Gerrard’s men were on the back of a 40-game unbeaten run which also included their unbeaten league season last time around.

Dundee United, meanwhile, were on the back of suffering a first game week loss against Aberdeen. They were looking to pull off an upset against the defending champions as Stephen Glass is expected to make vast changes to his approach.

This tactical analysis features the tactics deployed by both teams and discusses how Dundee United managed to pull off an upset. Let’s begin the analysis.

Both Dundee United and Rangers went with a 4-3-3 system and both of them played at least one of their new signings with Mulgrew starting for Dundee United and John Lundstram (ex-Premier League player) for Rangers in the midfield. The defending champions made four changes to the lineup to the team that won in the opening game week. Morelos, Lundstram, Helander and Barisic came into the lineup as Gerrard rung some changes. 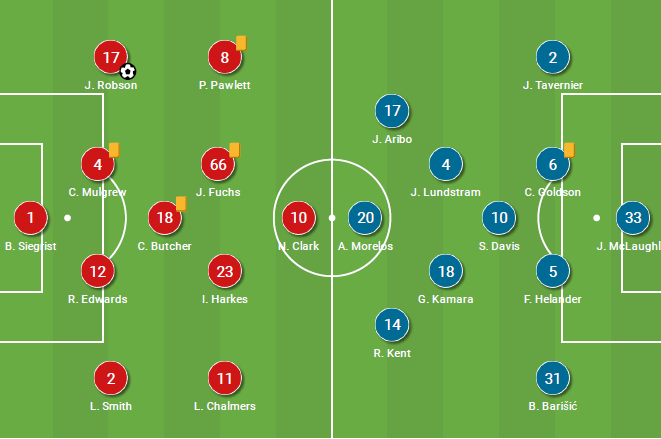 Dundee United, on the other hand, changed their shape after 2-0 defeat to Aberdeen on last weekend as Reynolds and Shankland made way for Fuchs and Chalmers as Stephen glass went from 3-5-2 system to a 4-3-3.

Throughout his tenure as Rangers manager, Gerrard has always favoured the 4-3-3 formation with the 4-2-3-1 occasionally used in bits and pieces. Analysts and experts have also stated that his system has shown similarities to the one Klopp has devised at Liverpool with wingers inverted and rotating constantly while the full-backs push extremely high to provide width in a 2-3-5 shape. But in this game, their positional play was a mixed bag as Dundee United were able to counter them.

In the example below, we can see Tavernier is high and wide as Davis has dropped as the third centre-back on the left side while Aribo up top has pinned the Dundee United defence. We can see that a passing lane to is Tavernier open with the Dundee United forward preferring to stay centrally as moving even a few inches wider would open a passing lane for the CB straight to Aribo and the defence would be exposed. 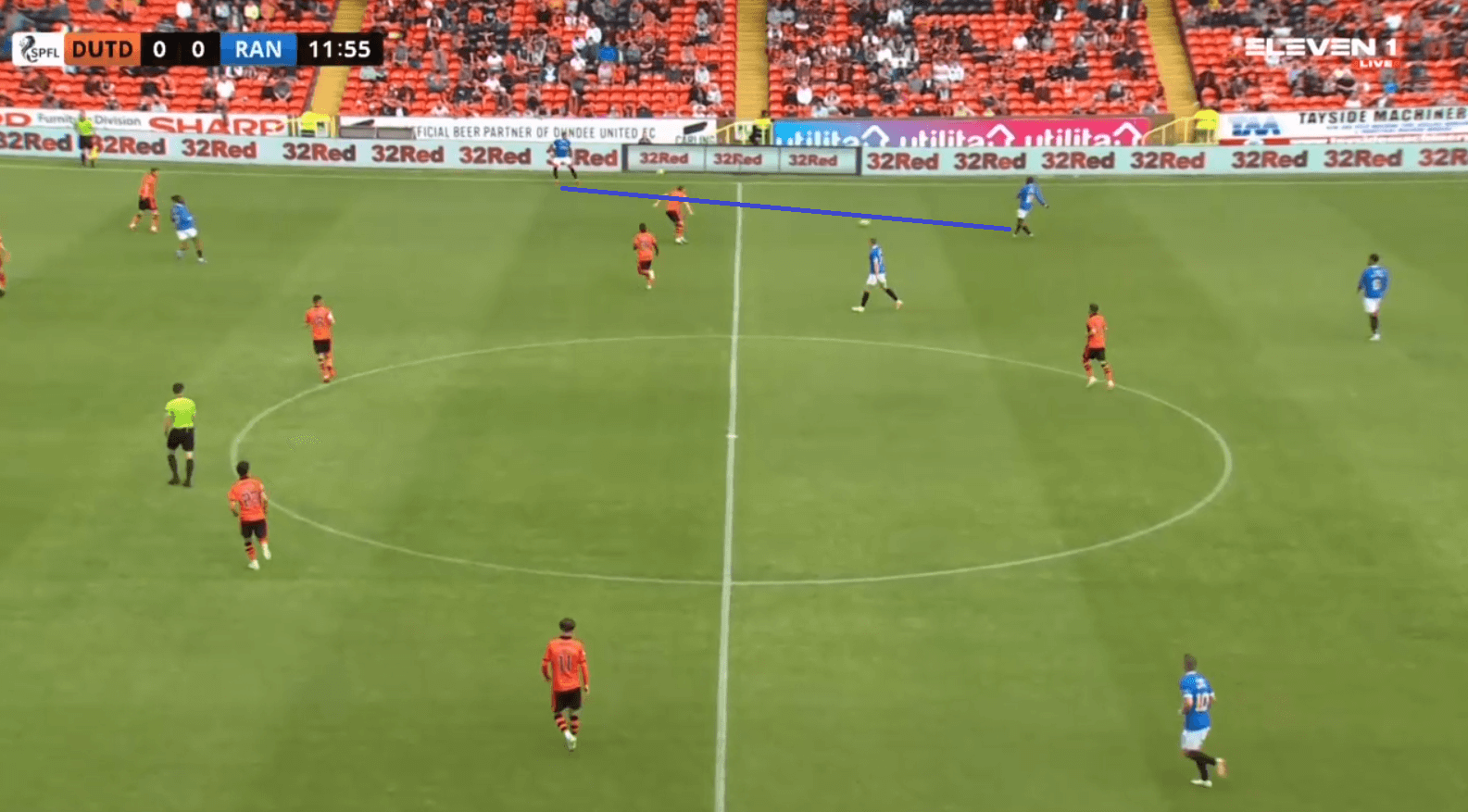 In another situation where a similar thing can be seen is below where Tavernier is left free to overlap and burst down the flank with the ball. This threat and risk is something that Dundee United were willing to take despite knowing that Tavernier was one of the most productive full-backs last season. This is to protect the central zones from getting exposed. 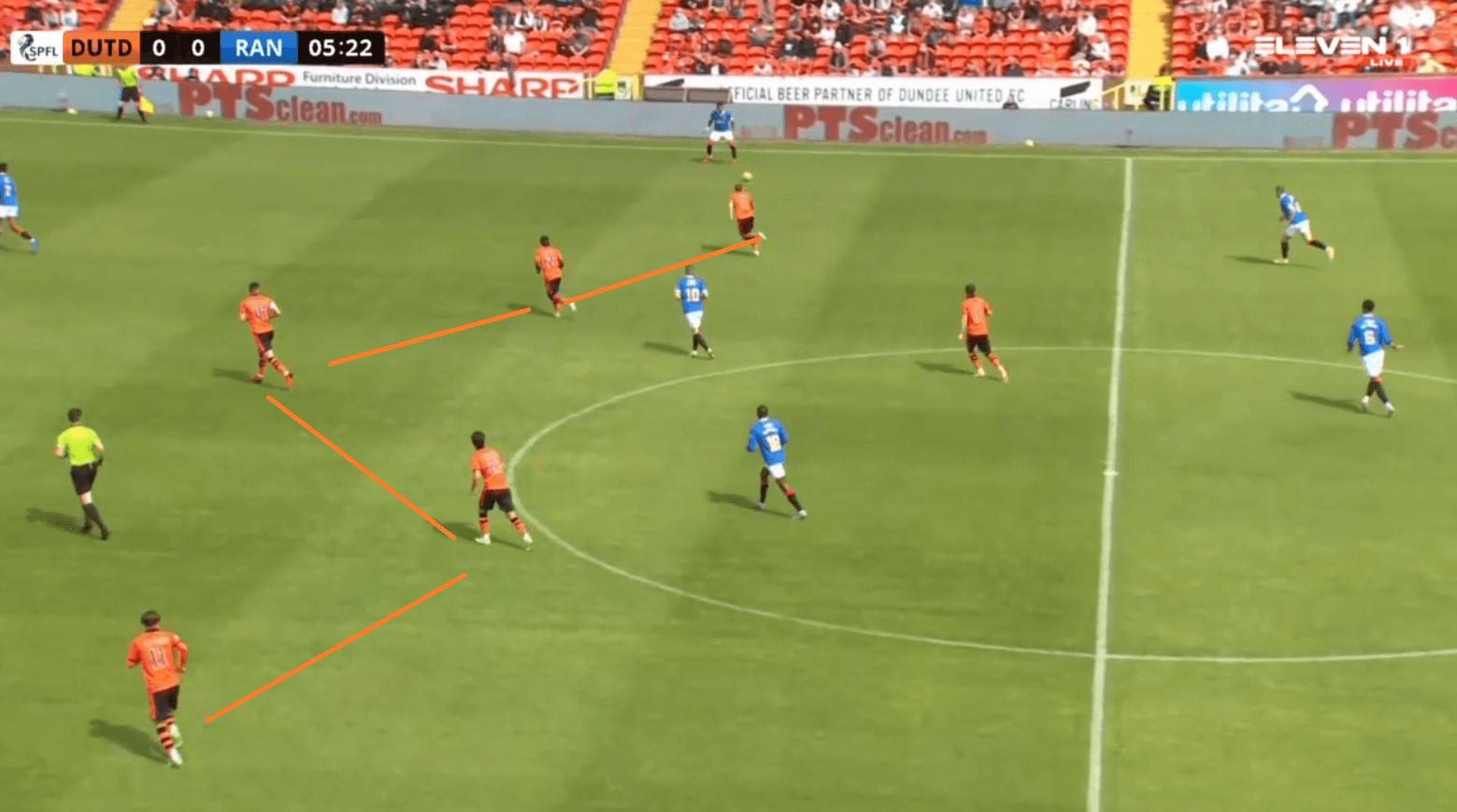 Nevertheless, Rangers had their moments of progressing forward especially with use of Aribo, whose ability to drop into spaces and attack them were useful for Rangers and Dundee United couldn’t do much about it in the game. We can see in the image below where Rangers are shifting flanks and Dundee United players have to move and shift across quickly. But Fuchs (marked orange) cannot reach the half-space after having to arrive from the opposite side while the wide winger is more attracted to Tavernier, who is still maintaining the width on that flank. Aribo can now receive on the half-turn and attack the United’s defence. 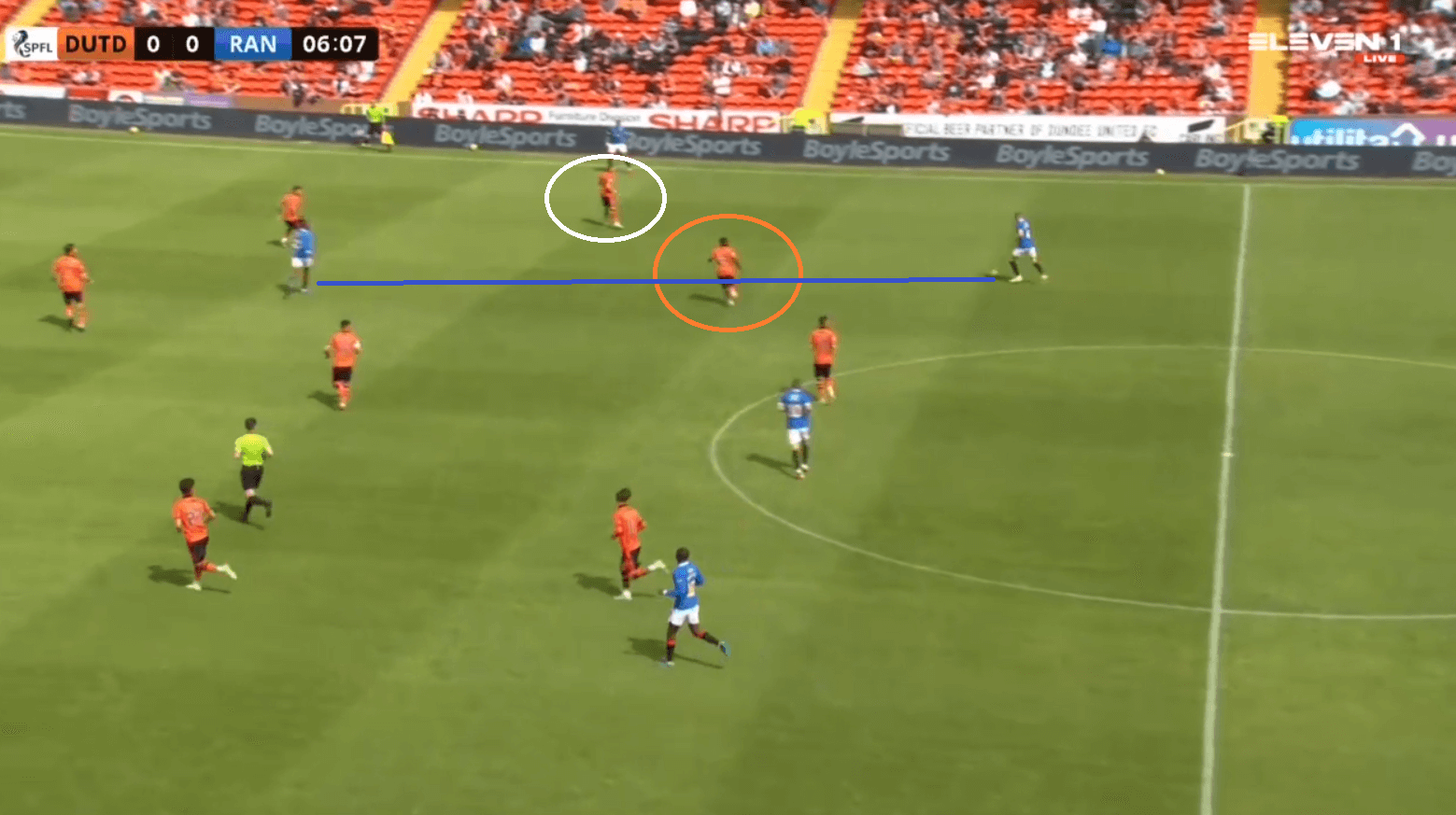 It was always going to be difficult for Dundee to decide on the trade-off and choose the right player to press and close him. Although they got it right for the most part of the game, Rangers also could have threatened them as they did manipulate to drag them and create spaces in the defence. We can see an example of another situation where Aribo drops deep to drag the full-back wide and Tavernier can now pass straight to Morelos. 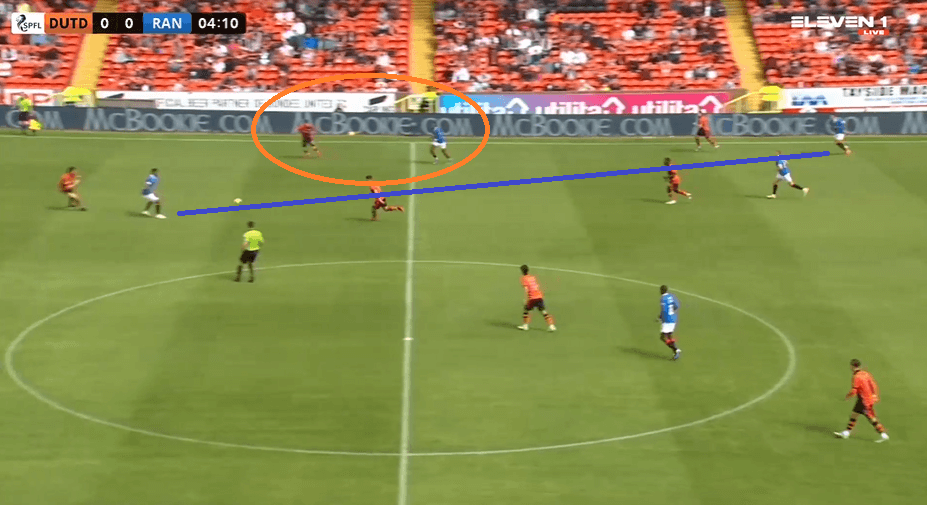 We mentioned as to Aribo was constantly threatening the Dundee United defence. We can see another example of that in the image below. He has found space in between the Dundee United’s CBs as Kent moves slightly to the left of the pitch so that a passing lane to Aribo is opened. Though the LCB of Dundee could have positioned himself in a better position, Aribo still had to be lauded for his intelligence here. 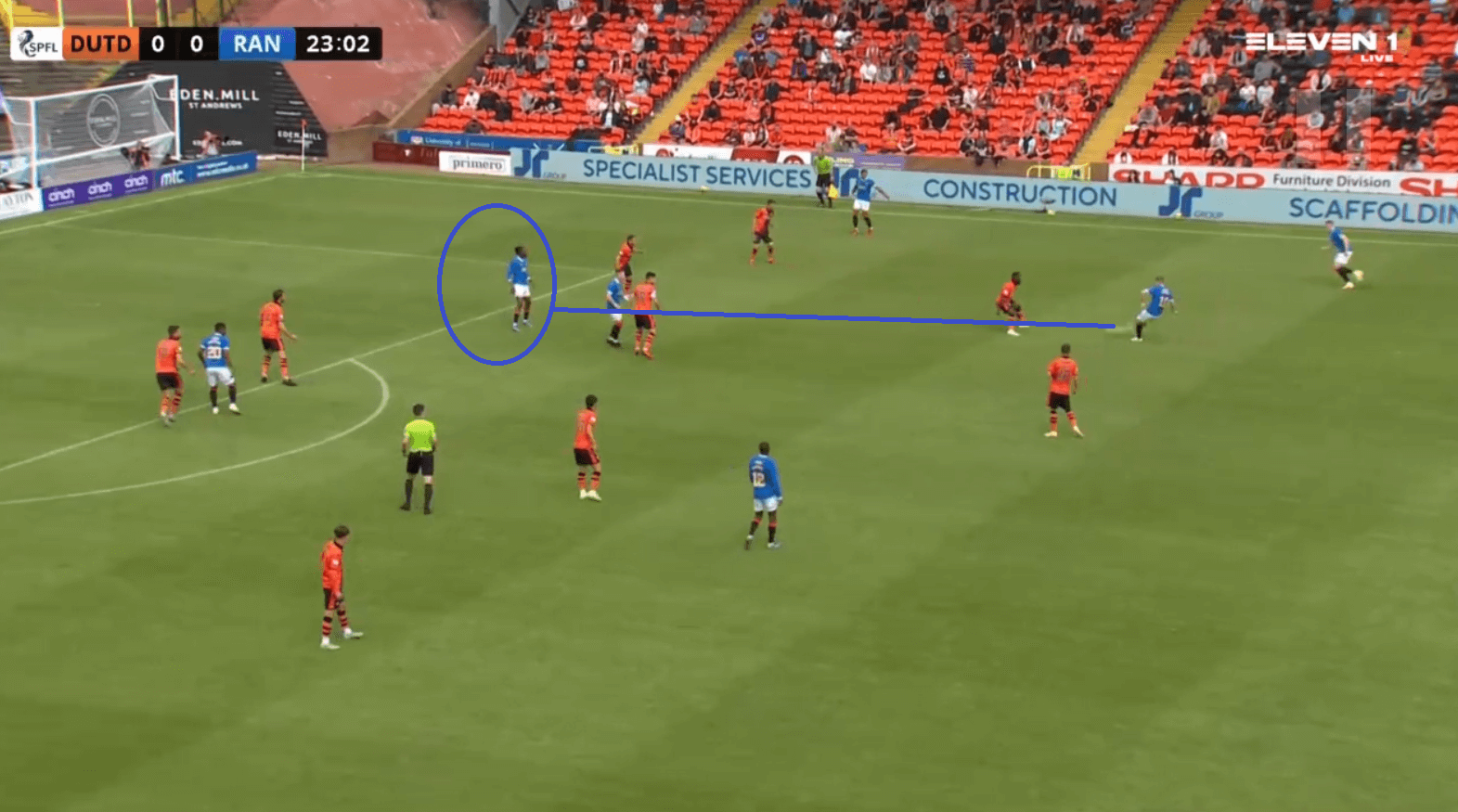 Even in their historic season, Rangers were often deemed to be over-reliant on their right flank to attack the final third. They continued to use the presence of Aribo and Tavernier on that flank to their advantage even in this game. Tavernier was also used to play balls from deeper regions with Aribo attacking the space in behind the full-back as Lundstram’s presence on that side drags the attention of the midfielder. We can see an example of this below. 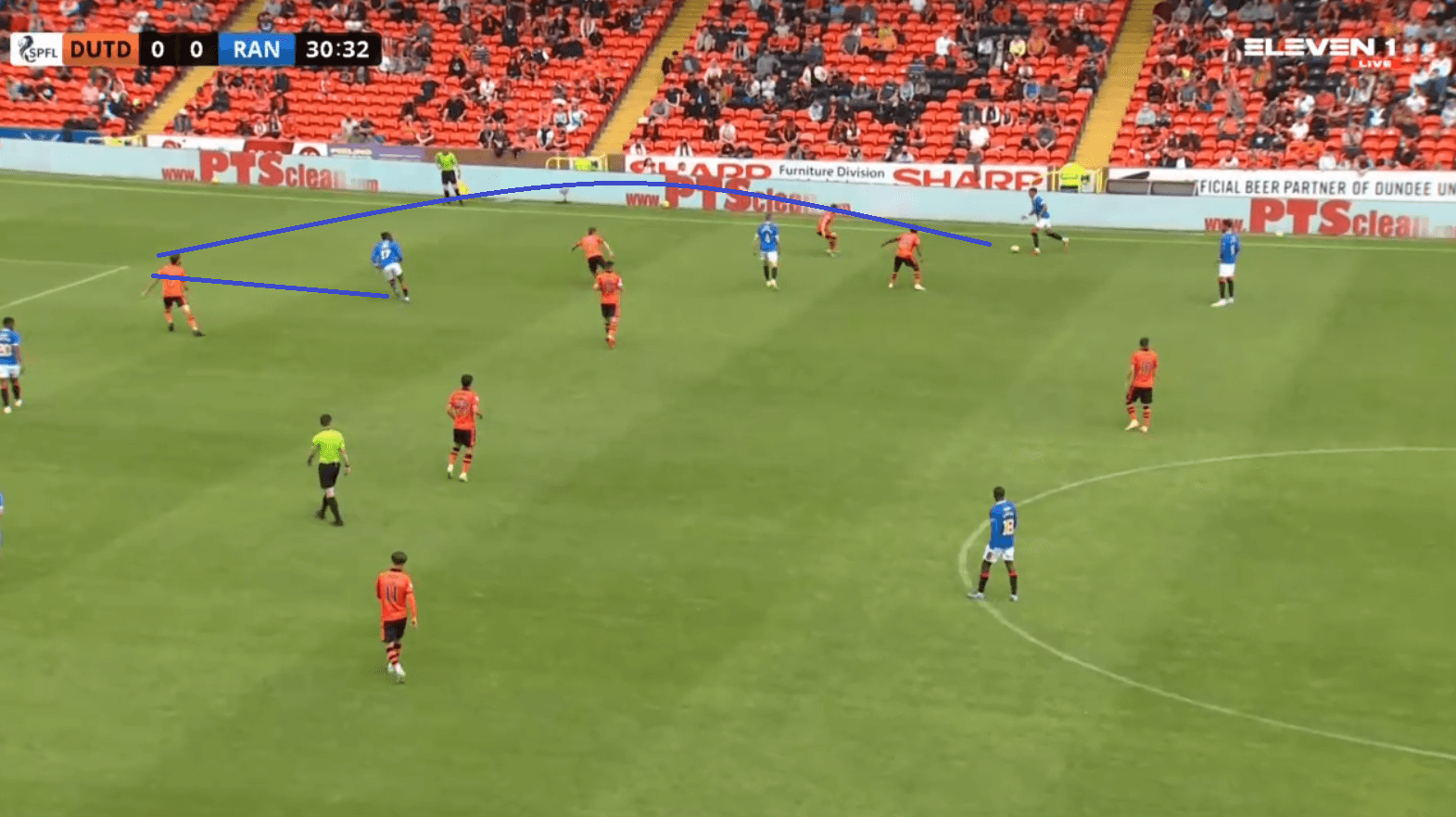 Proper access of the half-spaces was also an issue where Rangers failed to overload those areas in the game. We can see an example of this is in the below image where the Dundee United midfielder has decided to press high and leave his spot after knowing that there isn’t a single player who could fill in the space. This means that Rangers cannot use it to their advantage while also having to deal with the direct pressure. 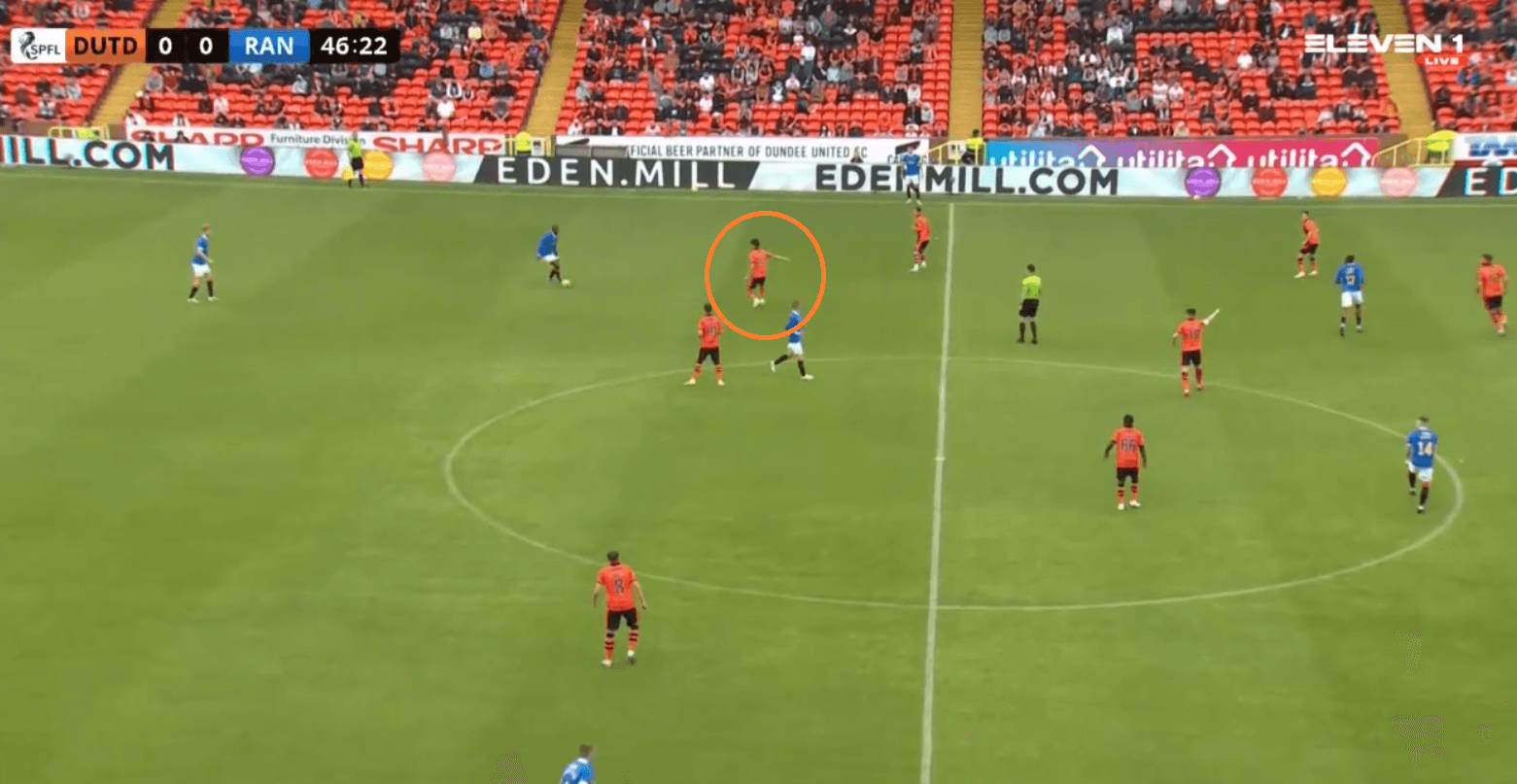 In the second half when Rangers were in much more need for a goal compared to Dundee United, Gerrard made a small change to his tactics where he pushed Lundstram more forward and constantly asked him to overlap while Tavernier would underlap or stay deep depending on the situation. With his presence it was an extra men for Dundee to deal with and also constant rotations between Lundstram and Tavernier was slightly difficult for their opponents to deal with. We can see an example of that in the image below where Lundstram has overlapped while Tavernier has underlapped into the half-spaces. 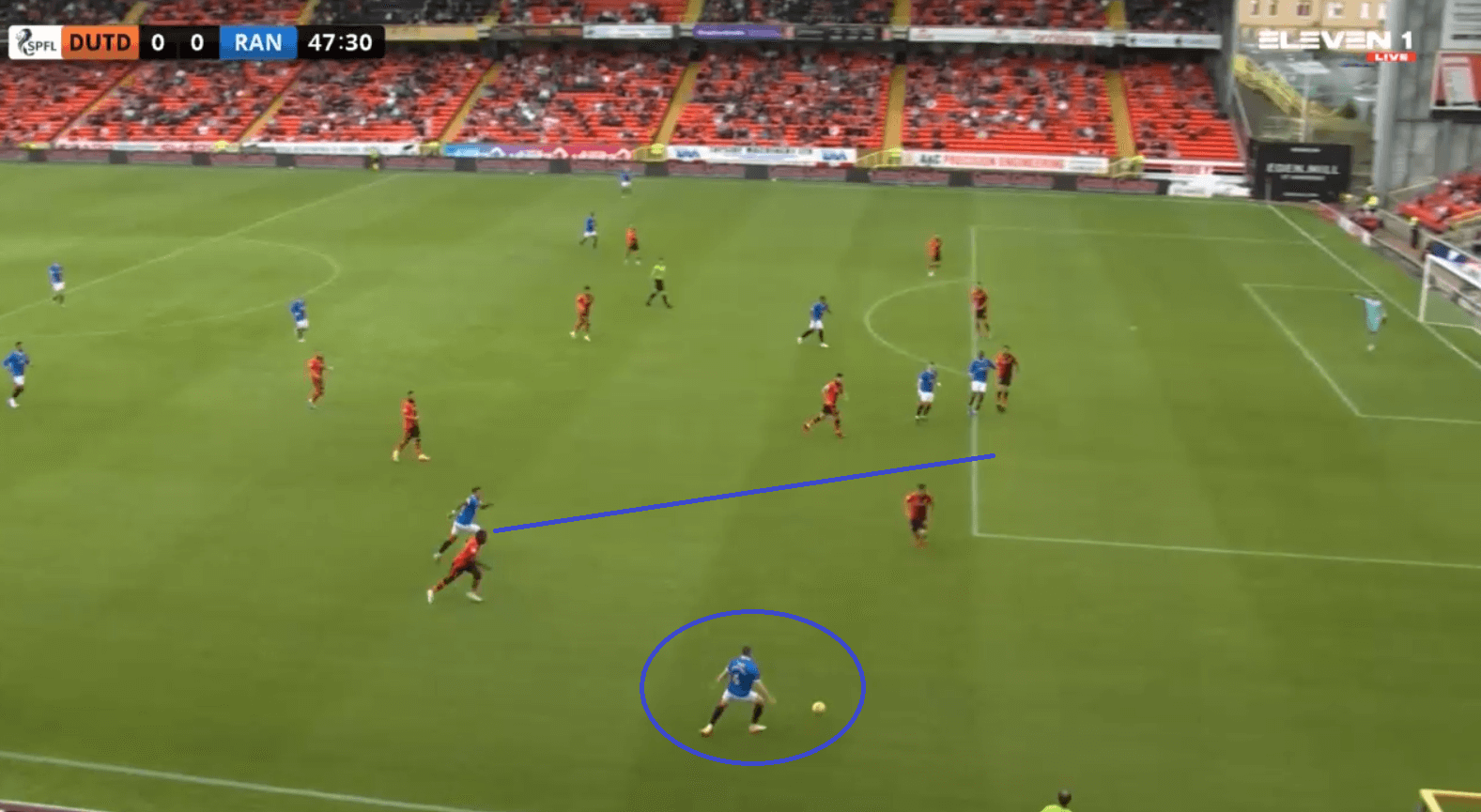 Dundee United lined up in a 4-3-3 formation and without possession, it went into a 4-5-1 in a mid-block. Clark, being the sole striker was tasked to keep constant tabs on Davis and close the passing lane from the centre-backs to him. They would often initiate some triggers where if a ball went backwards Chalmers would join Clark as another forward and press the CBs. He would then swiftly drop back if Dundee were to transit into a mid or low-block. Another trigger would be in the wings where they would look to cover the central zones initially and wait for the CBs or midfielders to pass it out wide where they would press aggressively to win the ball back.

We can see in the example below where Chalmers has gone up but immediately tracks back as Dundee United look to settle quickly into a mid-block and close the central spaces. 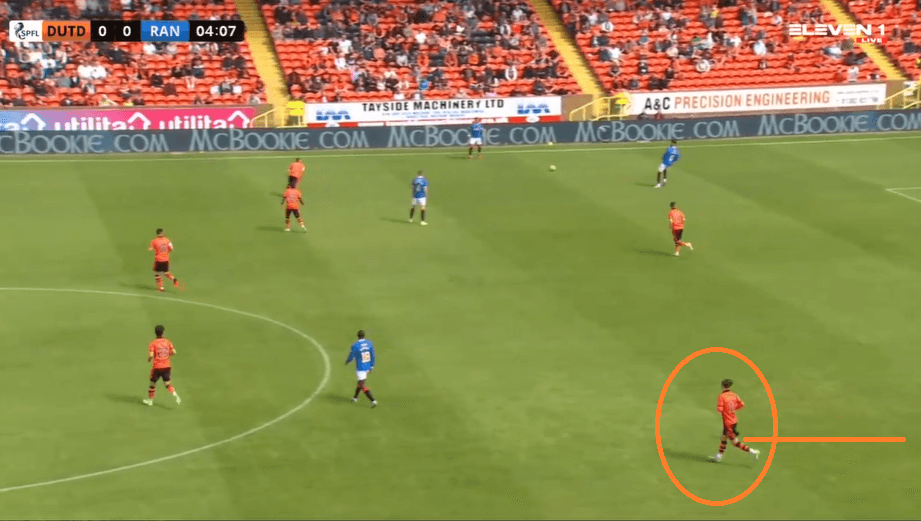 Their mid-block was well setup to stop Rangers from making line-breaking passes through the central regions and they mostly focussed on pushing them to less valuable zones on the pitch, which is the wide areas. 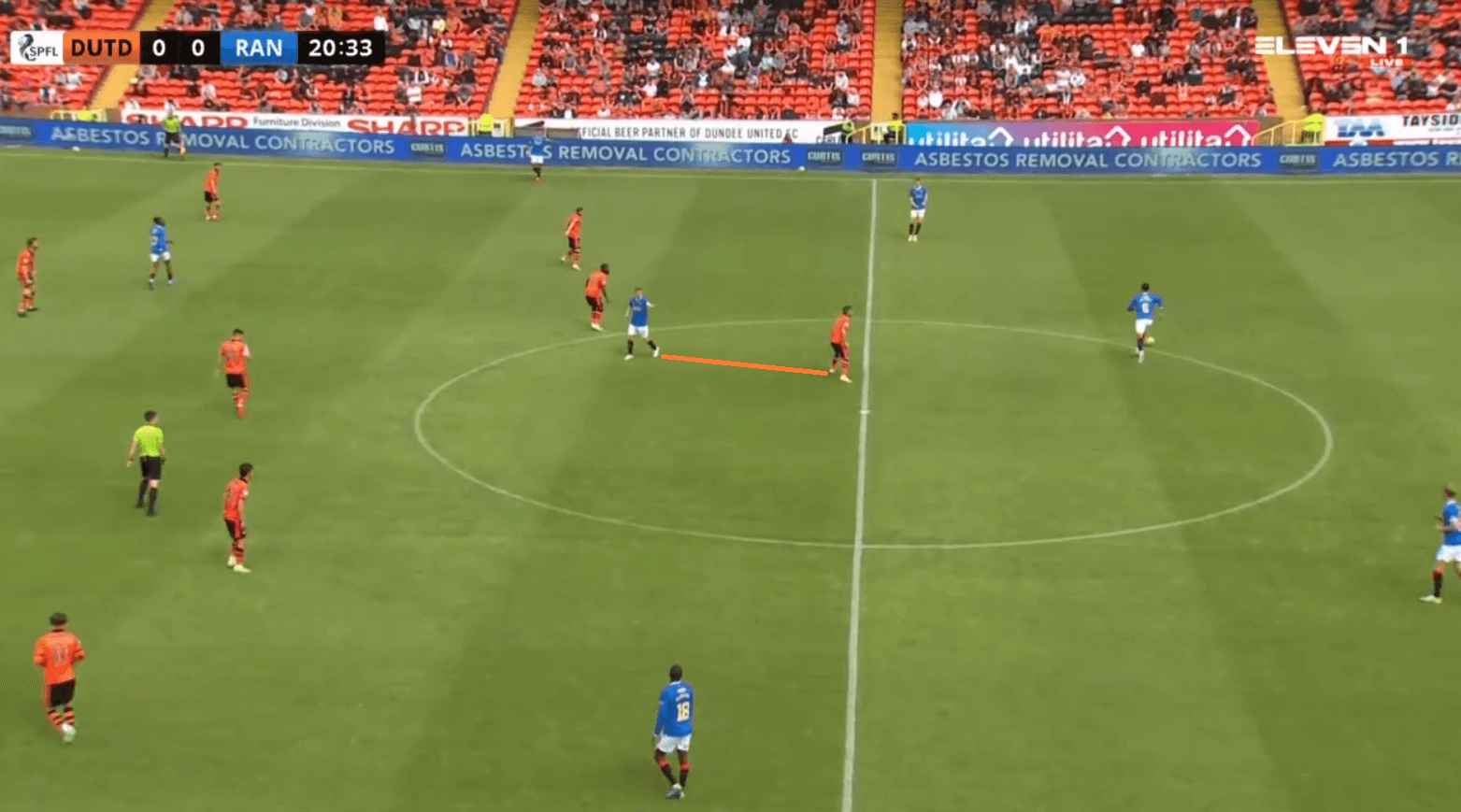 Dundee United were very shrewd in mostly dealing with the final passes and crosses into the box that Rangers would deliver. Even during transitions, they were well aware to delay and deflect the Rangers players to the wide areas while also having the other players commit behind and defend in large numbers inside the box. We can see an example of that in the image below as Rangers went on a counter-attack but Dundee were able to hold off the Rangers forwards while the other players immediately went back to defend in the box. 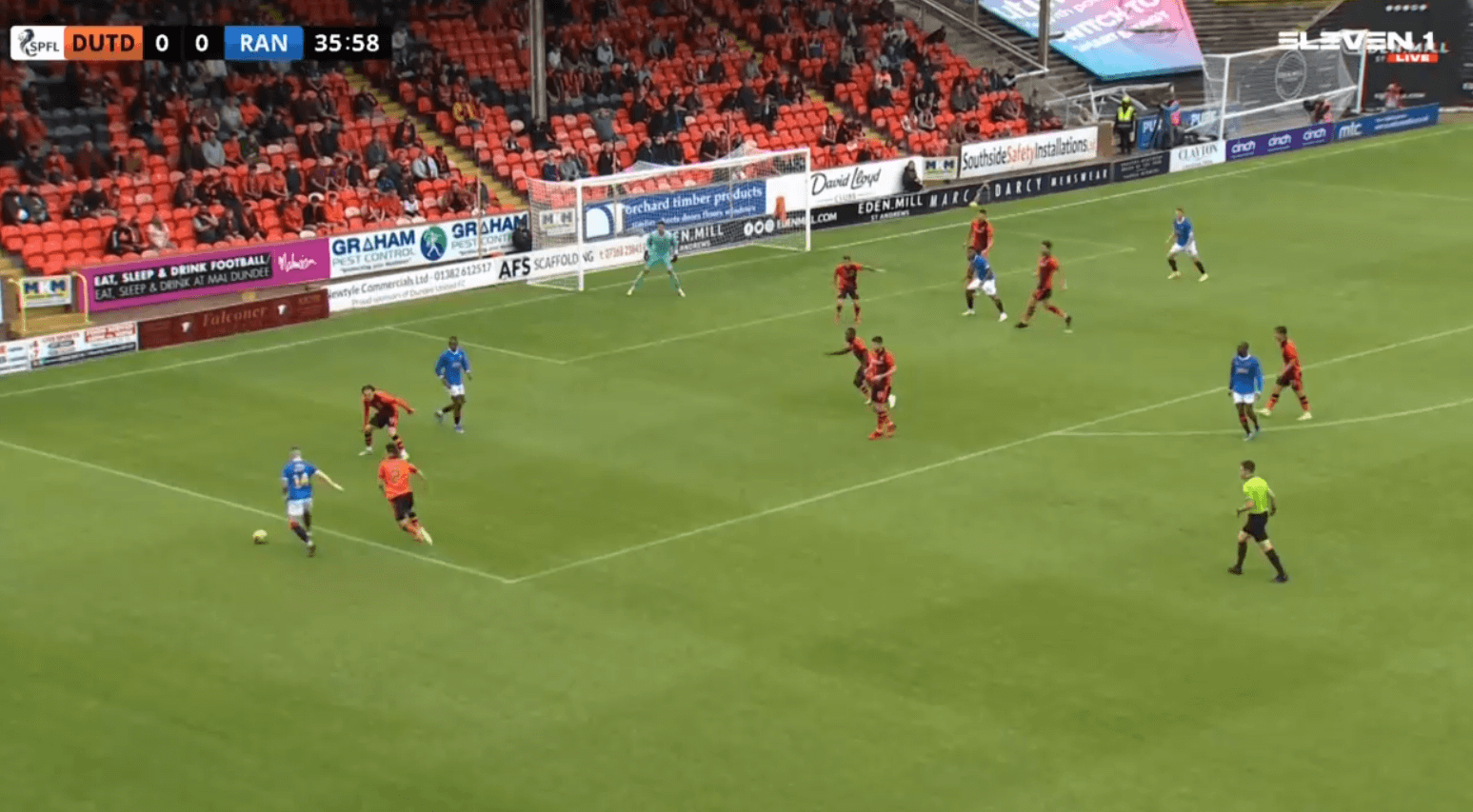 Another example of Dundee United committing a lot of defenders inside the box and ensuring that the defenders are equally spaces and in right zones to defend any ball that might come into the box from the wide regions. This meant that despite the Rangers’ efforts to get into the final third, they couldn’t really test Siegrist as they managed only two shots on target. 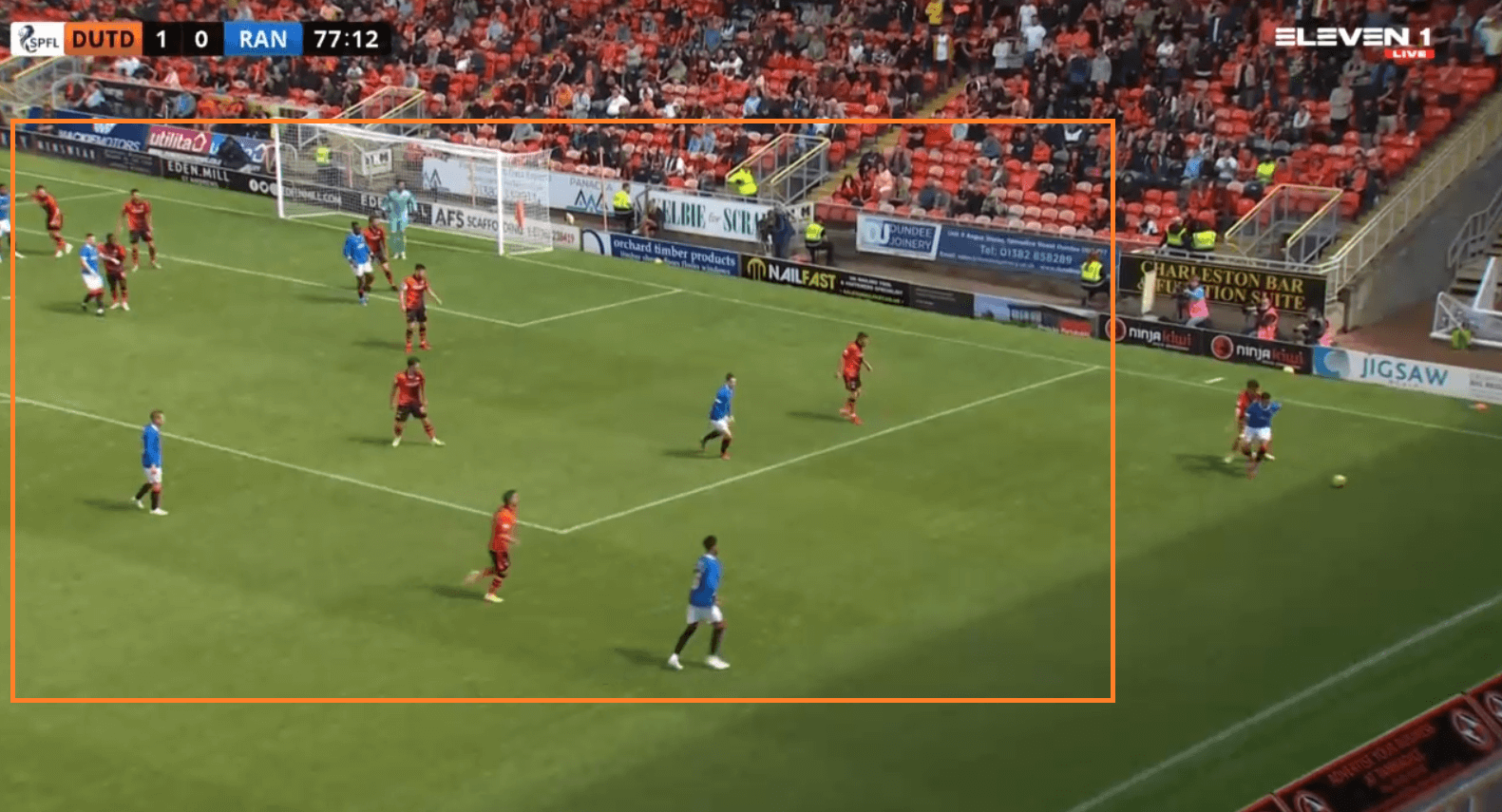 Rangers, without possession, have been set up to zonally defend and the reference for them on the pitch was mostly the ball as they look to overload the ball areas and also shift their defensive lines more towards those regions.  We can see an example of this in the image below as to how there is very less spacing between the defenders and all of them are very close to each other. The advantage to this is the pressing would be more compact and the Dundee United players would have very less angle to passing lanes when they look to make one. 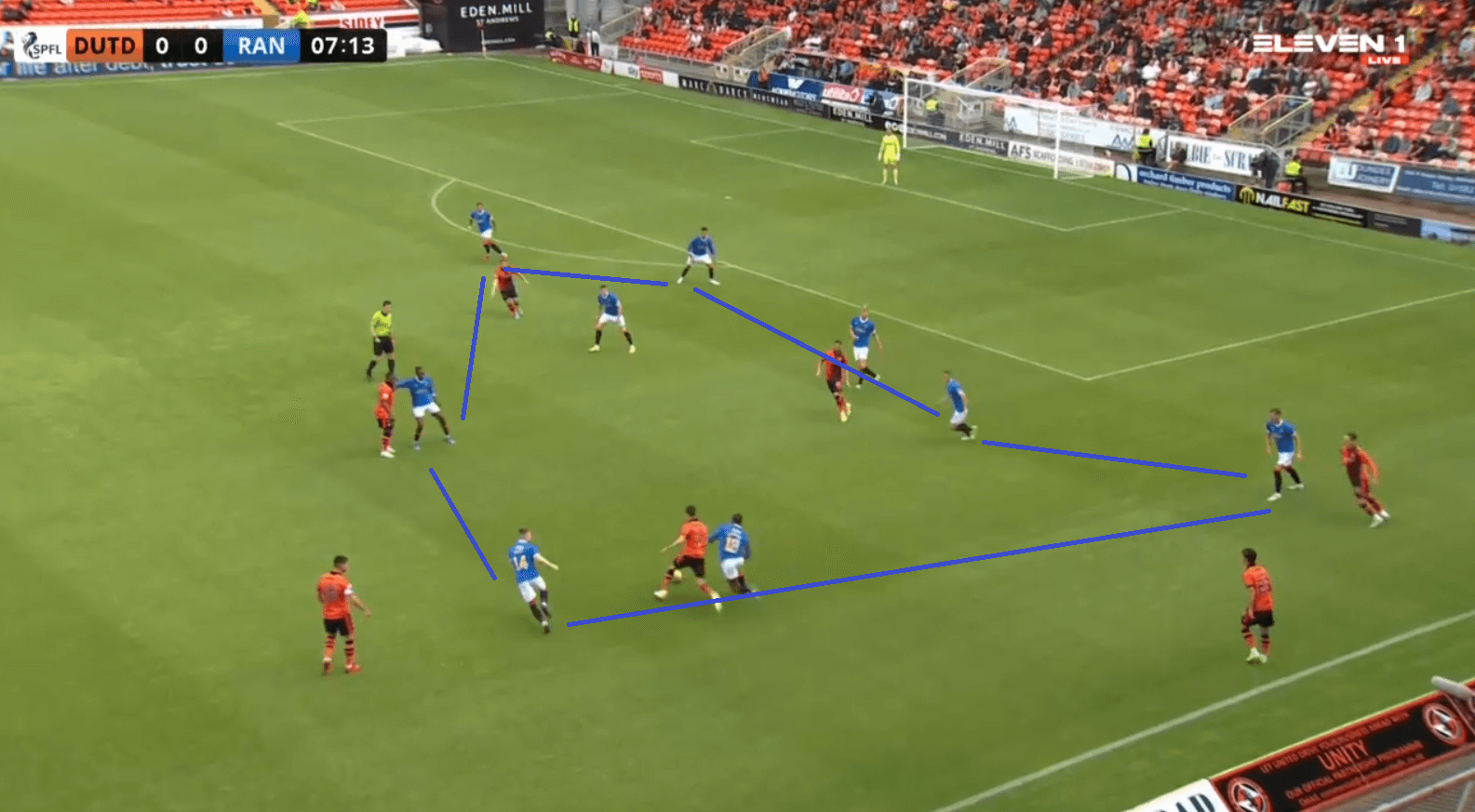 The obvious flaw here would be a single switch to the opposite side would be very difficult to deal with and Rangers were pretty vulnerable to such situations. Dundee United, in the second half found a situation and made a good use of it by switching to the underloaded side and making good use of a 2v2 situation which eventually resulted into a goal. 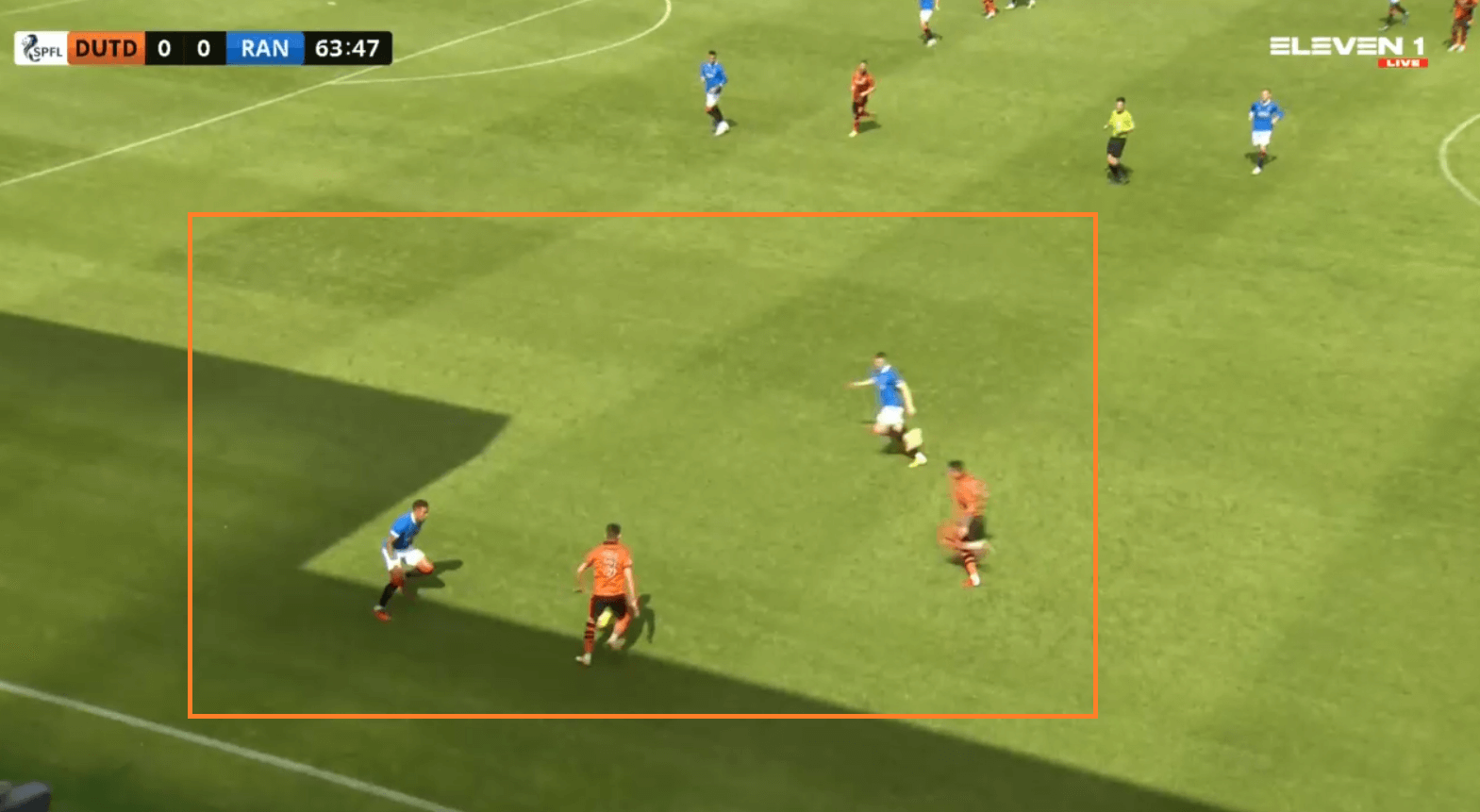 Rangers’ historic unbeaten run has finally come to an end with the 1-0 result. They were teams that were able to knock off Rangers at European competitions but domestically, all of them fell short of beating the defending champions. Though the result might come as a shock, this is very early to write off Steven Gerrard’s men despite there seeming to be a blue-print for the other team to follow in defeating them.