Olympics 2020: How Sweden managed to keep a clean sheet in their victory over Australia – tactical analysis

Australia faced Sweden in the semi-final of the 2020’s Olympics and the Swedish won 0-1, a result that takes them to the final to face Canada who kicked the USWNT out of the tournament. The result was certainly disappointing for the Matildas and what made it even more painful is the numerous chances they created and missed, including a disallowed Sam Kerr goal which could have turned things upside down. Australia must now recover from this result and battle for a third-place spot which will earn them a bronze medal against the USWNT.

In this tactical analysis article, we will explore both teams’ tactics – why did Sweden concede a lot of chances, how they managed to maintain a clean sheet, and why were the Australians unable to equalise or win despite attacking so often.

Australia, coached by Tony Gustavsson, played in a 3-4-3 formation with Teagan Micah as a goalkeeper, Ellie Carpenter, Alanna Kennedy and Steph Catley in defence, Hayley Raso and Tameka Yallop as wing-backs, with Emily van Egmond and Chloe Logarzo as central midfielders. In attack, the team relied on Kyah Simon and Caitlin Foord as wingers supporting Chelsea’s striker, Sam Kerr.

Sweden’s head coach Peter Gerhardsson started the game with a 4-2-3-1 formation with Hedvig Lindahl as a goalkeeper, Magdalena Eriksson, Nathalie Björn, Amanda Ilestedt and Bayern Munich’s Hanna Glas in defence, Caroline Seger and Filippa Angeldahl as central midfielders with Fridolina Rolfö, who has recently joined Barcelona, and Sofia Jakobsson as wingers and Real Madrid’s Kosovare Asllani as an advanced playmaker behind Stina Blackstenius, the team’s striker. 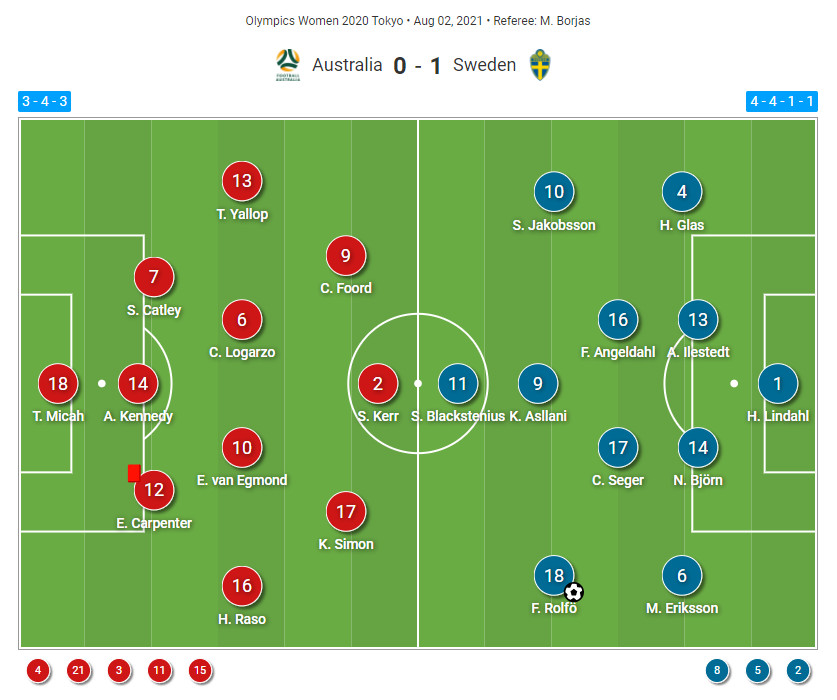 Both teams started this match with balance and a mixture between wanting to attack and remaining attentive to counter-attacks. Sweden were the team that had more possession at first and looked more in control of the game. Yet, Australia were the team that defended better. In fact, Australia’s 3-4-3 formation transformed into a 5-2-3 whenever the team was out of possession, and this helped them in securing the wings, and preventing any sort of penetration since they often had numerical superiority at the back, just like you can see below. 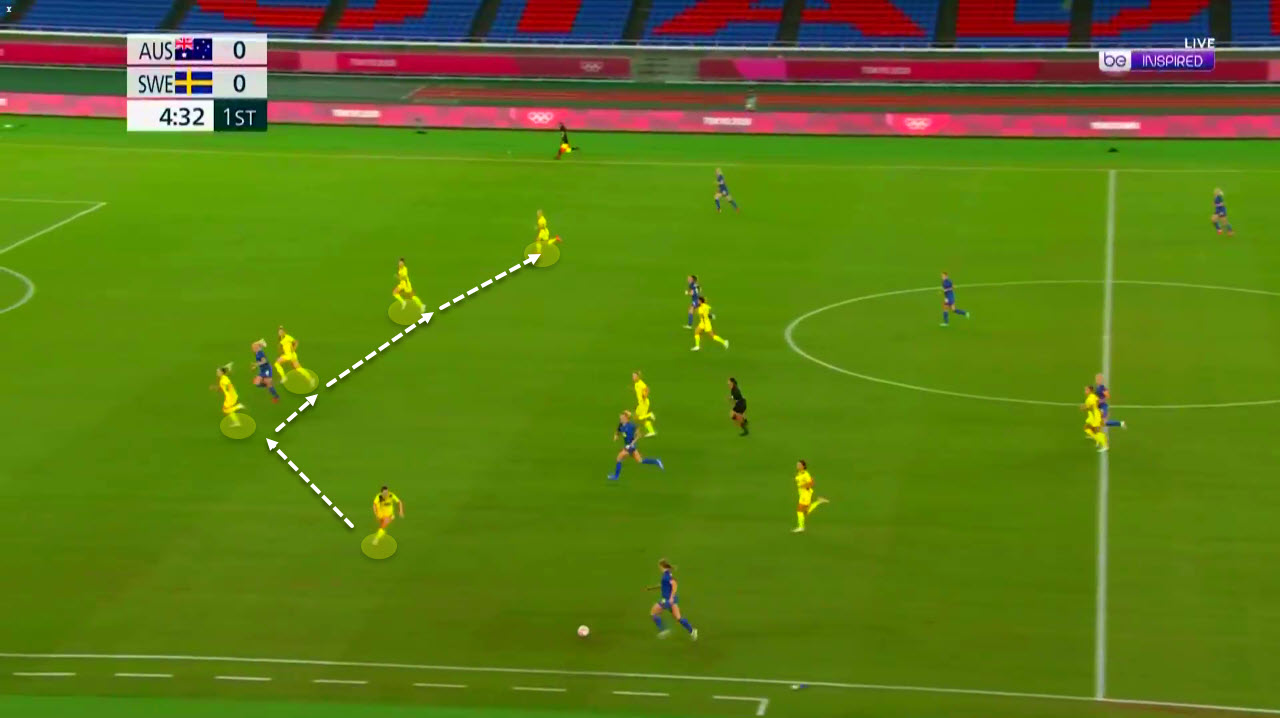 This type of defending gave Australia some sort of tranquillity at the back as Rolfo and Jakobsson weren’t able to be as dangerous as in the previous games given that there was always someone to mark them. Remaining wide to chase down wingers while having three centre-backs surrounding Blackstenius was important for Australia. It allowed them to gain more confidence and circulate the ball more often as the game went on and then they started to attack whenever possible.

And by attacking, they left some gaps at the back which Sweden wanted to exploit through the quick attacking players they have. However, both van Egmond and Chloe Logarzo were attentive and quick enough to come back and intercept the ball on several occasions, helping the defence and saving the team from dangerous Swedish counter-attacks. 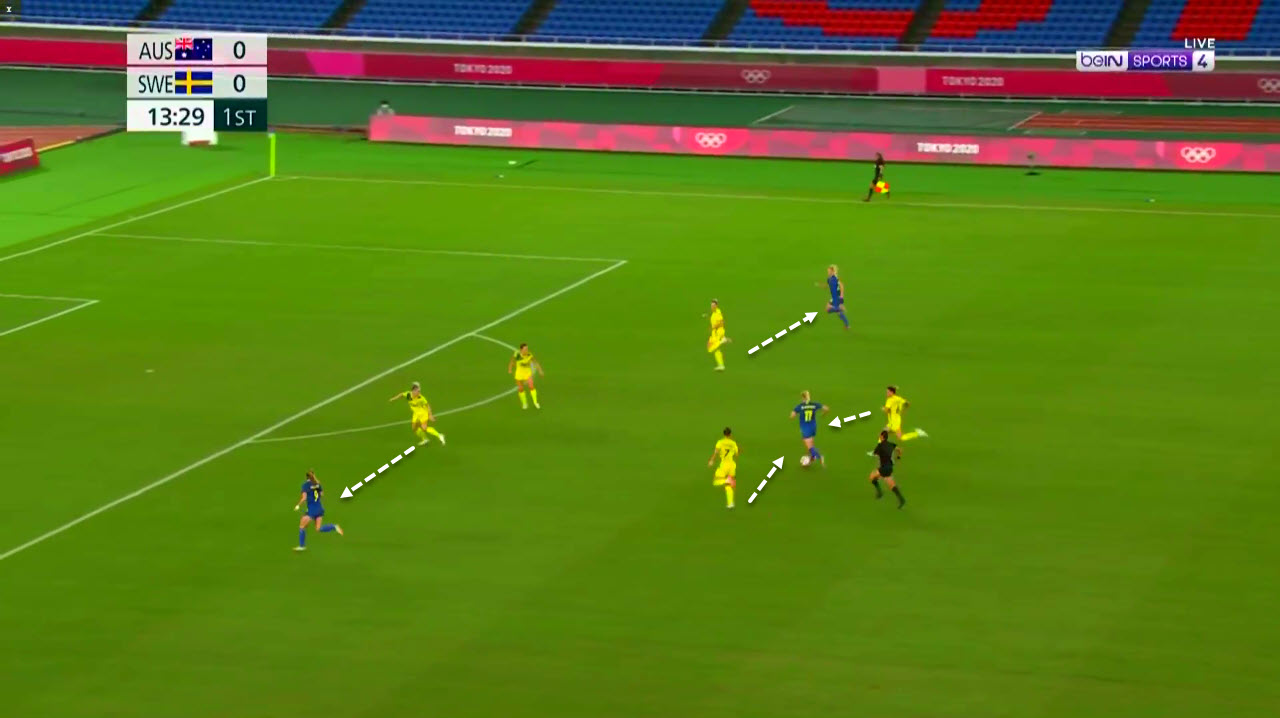 Nevertheless, Sweden’s effective right flank players created the difference as they did in the previous games thanks to their accurate passing, overlaps, and quick penetrations. The only issue was in exploiting those created chances inside the box since the final passes were not as accurate as needed. 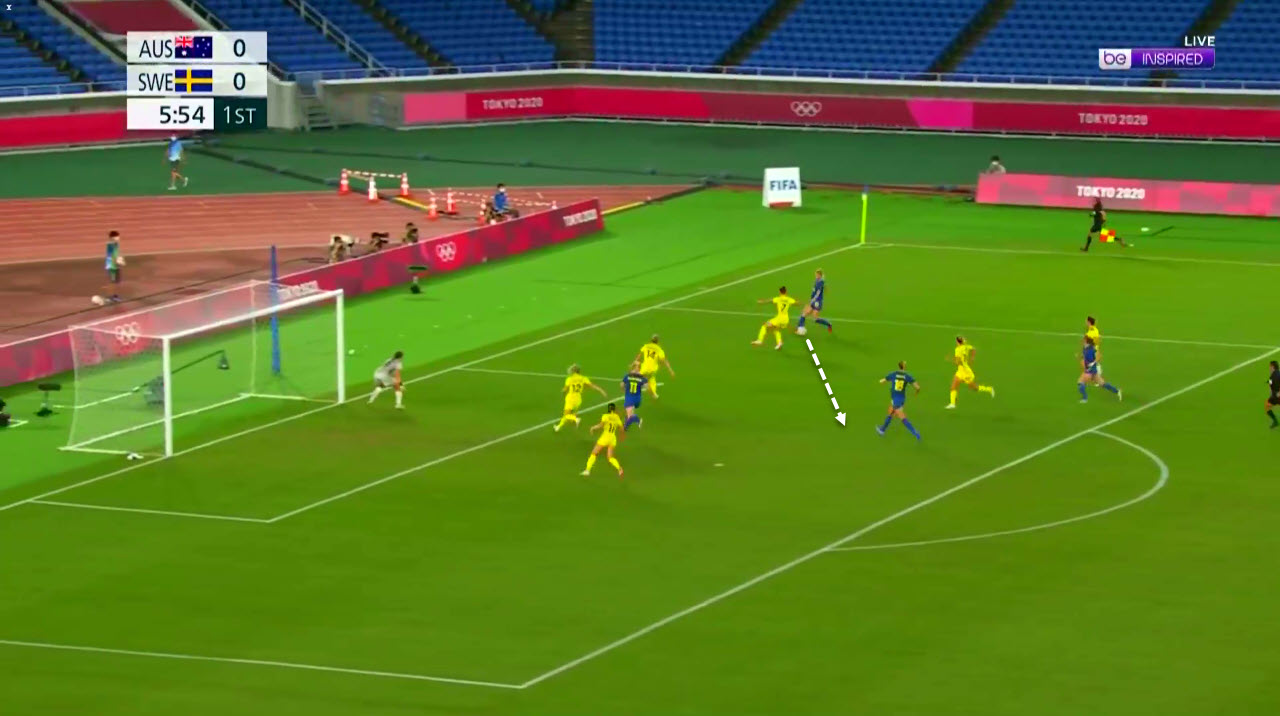 Sweden found the solution in shooting from distance in order to overcome the five-player wall and threaten the goalkeeper. However, not all their shots were on target, just three out of seven shots overall. Perhaps the most notable one was Rolfö’s excellent shot from outside the box which hit the crossbar and went out after surprising the goalkeeper. Sweden needed this sort of effort to be more determined to score and break down Australian defence. 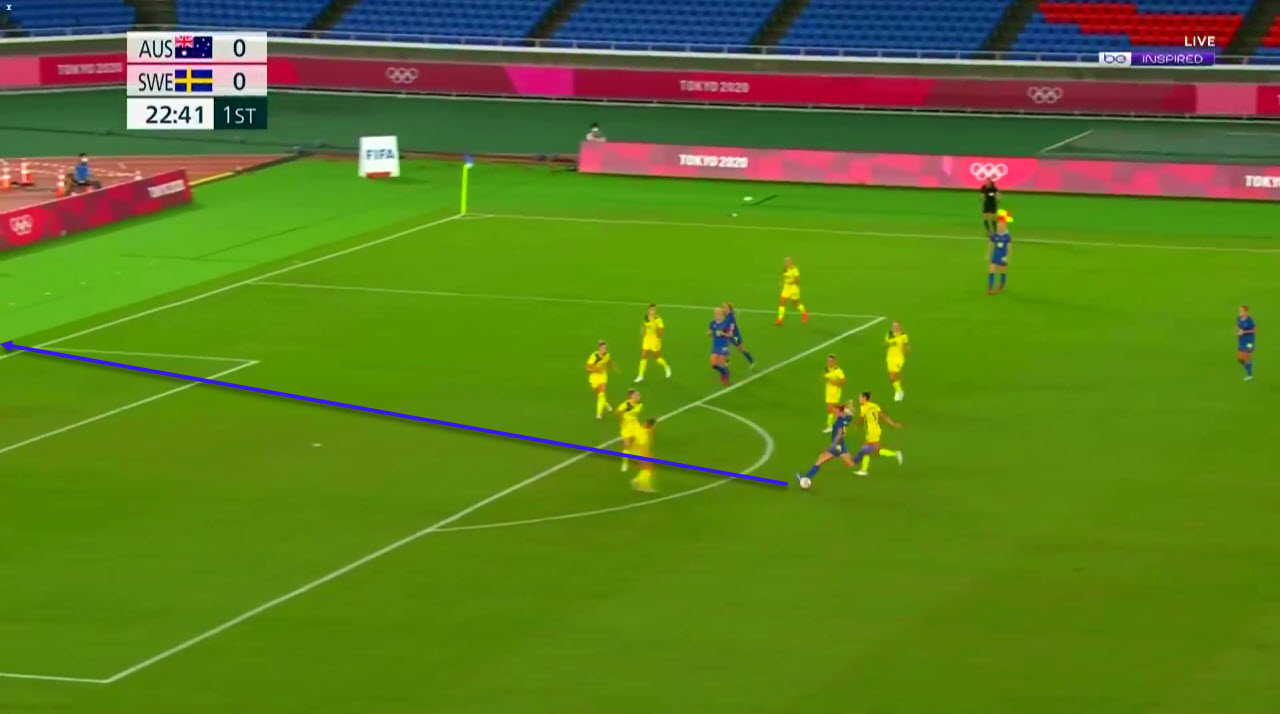 When Australia started advancing more often, Sweden had the chance to launch more counter-attacks and score – this was mainly possible thanks to Seger and Ilestedt who were always ready to start the counter with through passes. And then, Asllani’s role in linking midfield to attack was fundamental as she had to make vital passing choices in the final third. For instance, in this example, she could have excluded almost five Australian defenders with just one through pass to Jacobsson, and although she intended to do it, her pass wasn’t as distant as needed from the opposing players and therefore it was intercepted, preventing Jacobsson from a clear goalscoring chance. 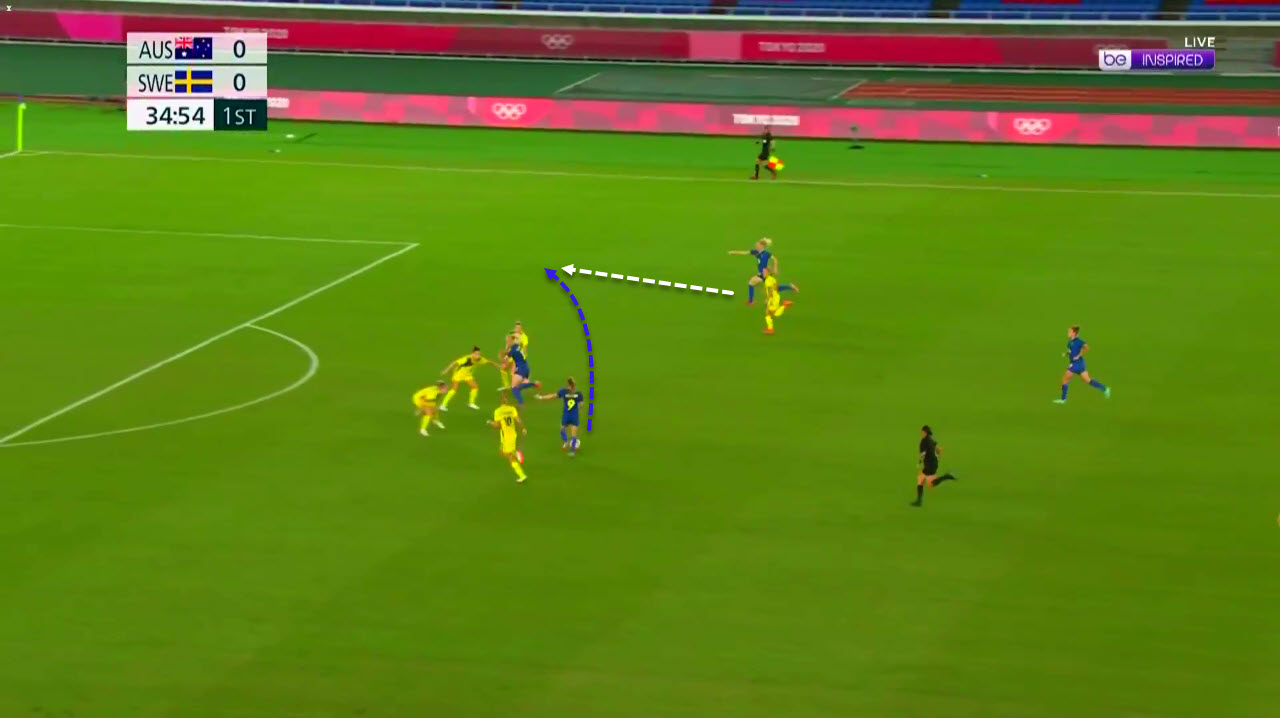 Following the many missed chances, Sweden were able to score a goal thanks to Rolfö’s creativity since she put the ball inside the net with the interior part of her foot in a beautiful manner. It was the only goal of the match and it sent Sweden to the final, even though they played with fire on many occasions, and that’s what we will analyse in the next section of the article.

Australia played a very good game from an attacking perspective but they failed to score. And in football, playing very well and creating so many chances doesn’t mean anything if goals are not scored. In fact, Australia shot 16 times, four of them on target. That’s a big number of shots yet the accuracy of those shots was too little. Australia mainly relied on crossing towards Kerr all the way from defence and that wasn’t always a good option since Sweden’s defenders are tall and excellent in aerial duels. The reliance on Foord and Simon should have been more concretised since both players could have created more danger if they used their skills on the wings instead of crossing the ball early on most occasions.

Nevertheless, Kerr was able to be dangerous in more than one attack, as she even scored a goal following Catley’s free-kick but then the referee didn’t count it, even though it was so clear that Kerr was not in an offside position. Sweden’s defenders in this free-kick didn’t mark Kerr as they should have done since they let her shoot the ball with ease without any disturbance. They would have regretted this defensive error if the referee allowed the goal. 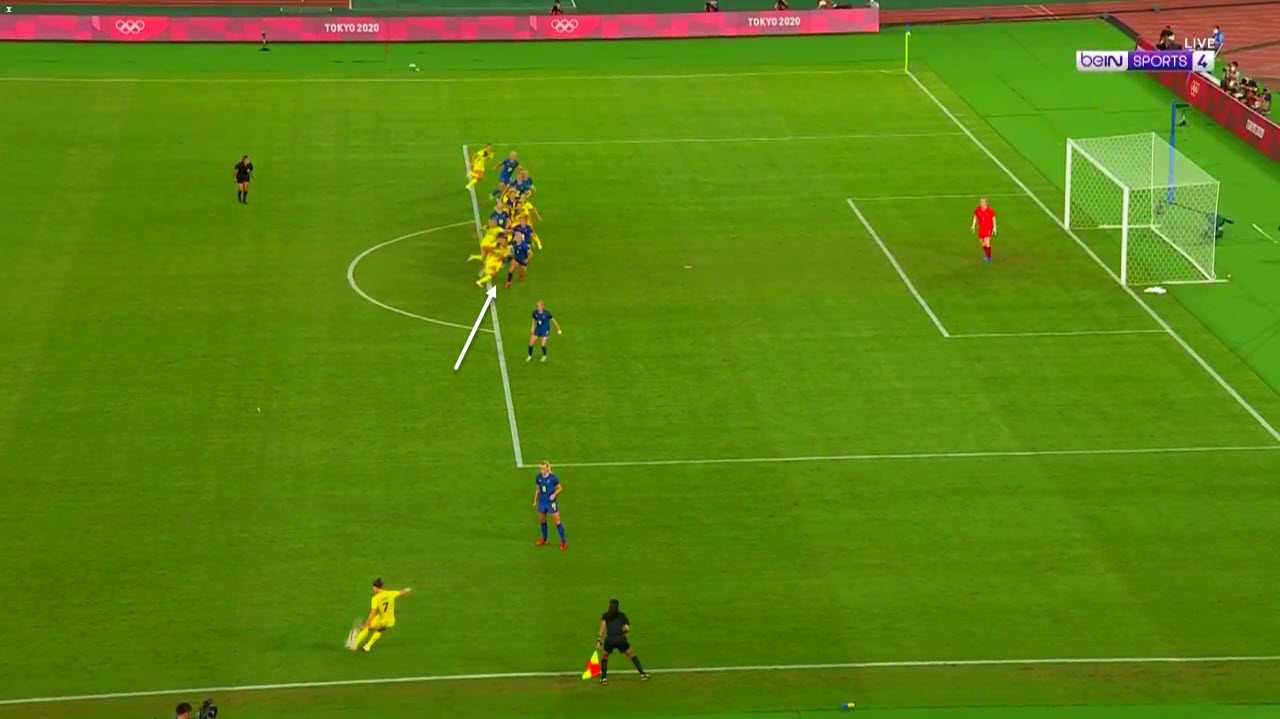 Apart from this disallowed goal, Kerr received another golden scoring chance at the end of the first half but failed to score it. After receiving a cross from Catley at the back of the defence, Kerr dribbled past the goalkeeper and had the possibility of shooting directly towards the goal, yet she hesitated and preferred to pass to a teammate, missing the chance of the match. 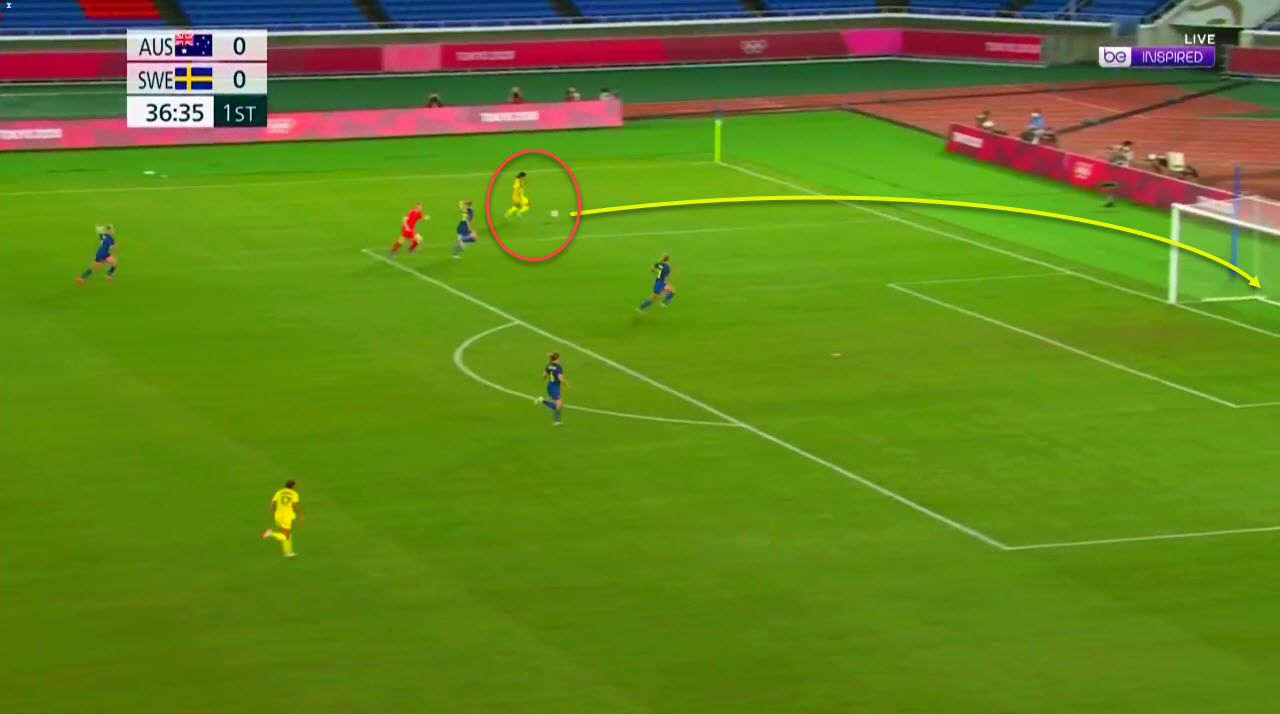 Moreover, Australia had other scoring chances also thanks to early crosses towards the box, but this time, it was Raso who controlled the ball but failed to notice Kerr’s movement while being unmarked. Unfortunately for the Matildas, Raso’s control was wrong and they were not able to exploit Sweden’s defensive mistake since they let Kerr unmarked right in front of goal. 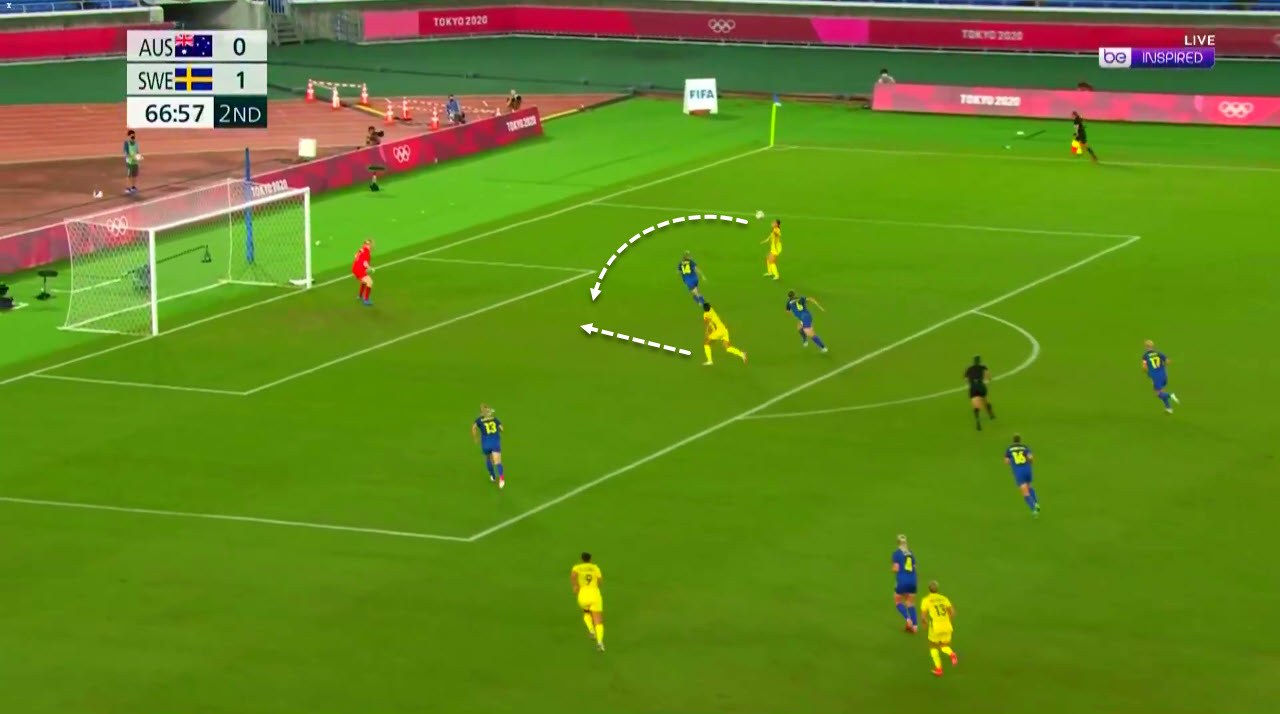 Sweden proved once again that they became one of the most powerful women’s national teams in the world by qualifying to the final and playing entertaining football in almost all the games that they played until the present. Now, they will have to be even more crucial in attack and more importantly, more attentive in defence since it is not guaranteed that they will avoid a defeat if they commit the same defensive mistakes made against Australia.

On the other side, Australia will be looking forward to facing the USWNT in a big clash for the bronze medal as both teams will try to win in order to regain the support of their fans and end the tournament in a good way.