La Liga is as exciting as ever. With Atlético Madrid beating Barcelona and Real Madrid to the trophy last season, it showed there’s still a dose of unpredictability and flair over in Spain. But who are some of the most talented young players in the league?

Lionel Messi can’t carry La Liga’s name on his back forever and with the likes of Cristiano Ronaldo and Sergio Ramos departing, it might be up to the new talents to represent. So this data analysis will be the first part of our analysis series looking at the best U23 players Spain’s top-flight has to offer, this week focusing on defenders.

Before we delve into the data, it’s important to explain our filters as well as saying that this analysis will not go deep into the tactics of each player’s team. However, analysing defenders is a largely ungrateful task as most metrics don’t paint a clear picture of their quality. Statistics such as defensive duels, interceptions and even fouls and yellow cards are all affected by teams’ collective possession values and as such, have to be properly adjusted.

I’ve calculated the PAdj metrics used in this data analysis myself (where needed) and have taken all data provided by Wyscout. All of the players in the analysis are U23 La Liga defenders who have played at least 700 minutes in the 2020/21 season.

Note, however, that both centre-backs and full-backs have been included and knowing that the two have very different roles in modern football, I’ve done my best to include metrics that either favour or cover both equally.

The first graph you can see below is a fairly straightforward one; it measures possession-adjusted (PAdj) defensive duels and PAdj successful defensive actions per 90 minutes. The former gives us an outline of how often a defender engages in a challenge and the latter compiles all defensive actions (such as duels, interceptions, recoveries and shots blocked) and gives us only the positive outcomes. 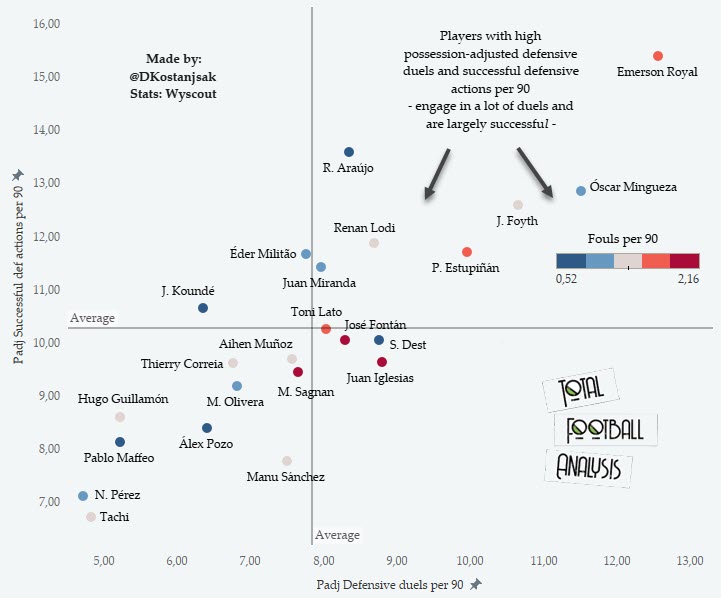 All the players in the top-right quadrant are the ones to look out for as they are the individuals tallying high values in both metrics, displaying both volume and proficiency. Perhaps somewhat surprisingly, Emerson Royal of Barcelona and formerly of Real Betis (12.56 PAdj defensive duels pe 90 and 15.39 PAdj successful defensive actions per 90) tops the charts but with a slight caveat.

His 2020/21 was spent with Real Betis, who have conceded 46.1% possession and his figures in the graph are adjusted to Barcelona’s conceded possession – 34.2%. This doesn’t necessarily mean he would perform at the same level within Barcelona’s tactics and setup but Betis being an above-average possession-dominating team still gives us a fair outline of his defensive performances.

Next, we’ll look at their aerial prowess with aerial duels per 90 and the percentage of those duels they’ve managed to win in 2020/21. This time, we haven’t used possession-adjusted metrics as this can be both an attacking and a defensive category. 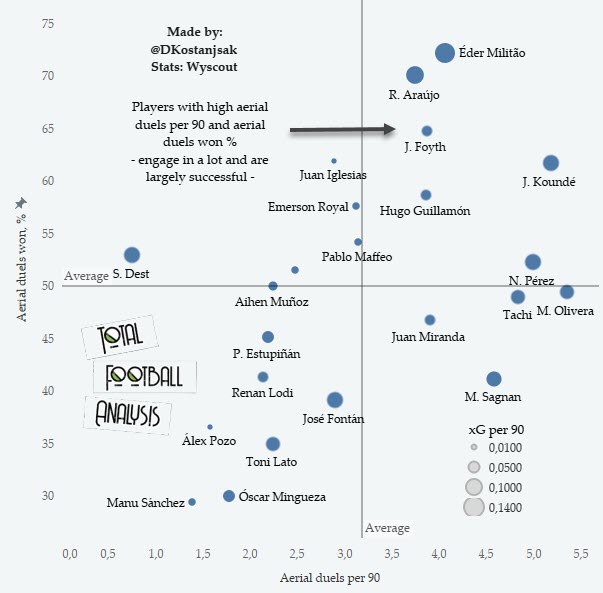 It’s important to note here that I’ve opted to include expected goals (xG) per 90, which is represented by the size of the dots. The reason behind it is that aerial duels, as alluded to, can be used as an attacking metric too, telling us how effective the players are in the opposition’s box. With that said, all three of Militão (0.14 xG per 90), Araújo (0.11) and Koundé (0.09) are among the best in the graph.

But what about their positional awareness? This is largely a metric we’re unable to effectively quantify but a combination of possession-adjusted interceptions and possession-adjusted shots blocked per 90 should give us a fair answer. Both of these require a certain sense and awareness of one’s surroundings, as well as being in the right place at the right time. 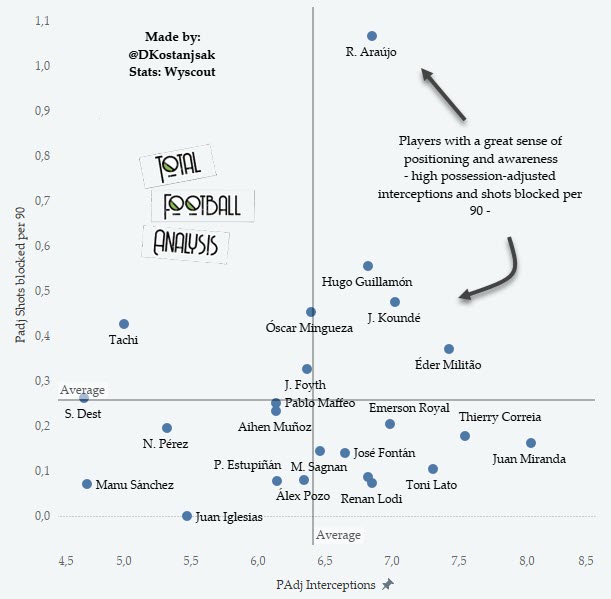 The final defensive category we’ll analyse here is aggressiveness via PAdj fouls per 90 and yellow cards per 90. These metrics can help us identify players who commit a lot of fouls and get away with it and those who are often booked. 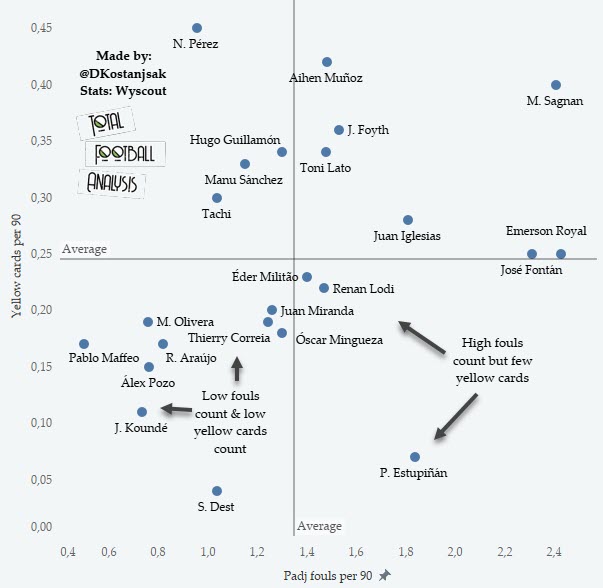 This time around, we’re focusing on the players in the bottom-left and bottom-right quadrants in particular. They are the individuals who either don’t commit a lot of fouls and are not booked often or players who in turn, do make fouls often but are rarely booked. In the former category, we finally get some new names such as Barcelona’s Sergiño Dest (1.038 fouls per 90 and 0.04 yellow cards per 90), Alejandro Pozo of Sevilla (0.76 and 0.15) who spent 2020/21 at Eibar, as well as Pablo Maffeo (0.5 and 0.17), Mallorca’s loanee (from VfB Stuttgart) who played for Huesca. 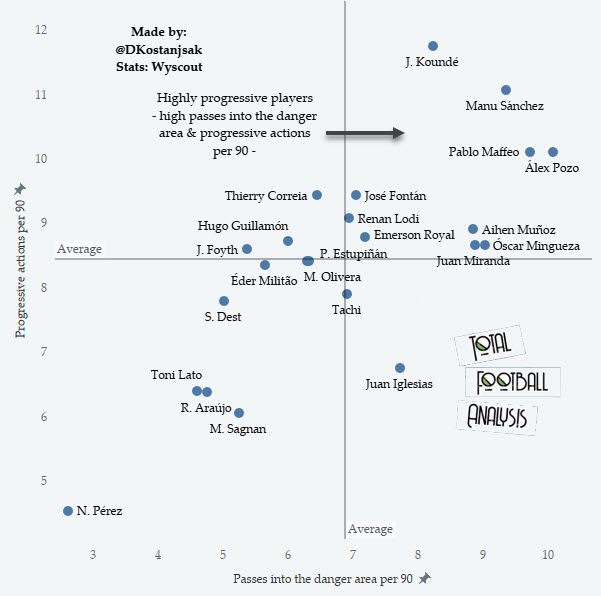 While they’re not the only impressive names on the list, they stand out enough to be mentioned separately from the rest of the group. Finally, with progression and defensive output crossed off, let’s see how effective are these U23 defenders in chance-creation.

Our last graph of this data analysis measures key passes per 90 minutes and deep completions per 90 minutes with expected assists per 90 (xA) depicted with the colour of the dots. Naturally, many of the centre-backs have been filtered out of the graph as their values were either zero or very close to it in either or even both main metrics. 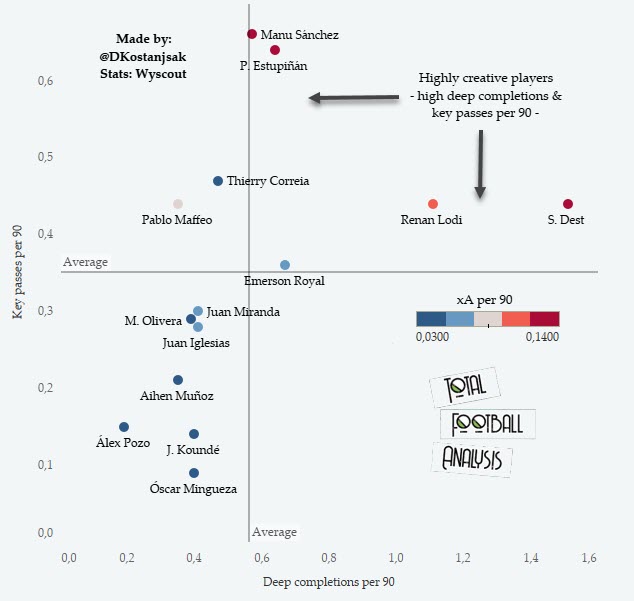 However, is their overall game and output enough to ensure they get a spot in the final shortlist? Let’s find out.

The shortlist will include three players with profiles compared to the rest of La Liga defenders (percentiles in the bar graphs, per 90 values in the tables below) across all age groups. 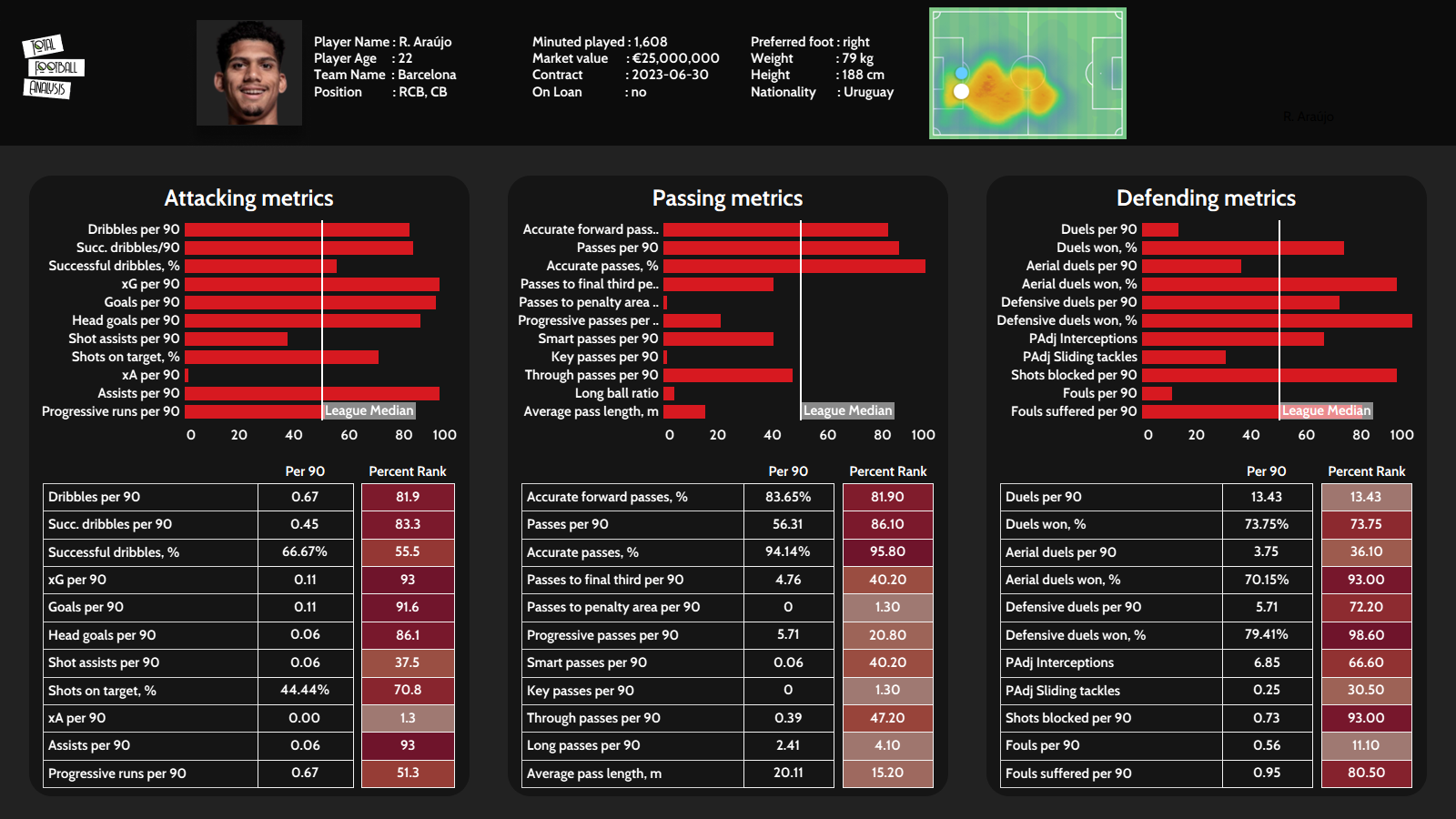 It probably comes as no surprise that Barcelona’s Araújo is among our three-man shortlist. The young Uruguayan has been impressive in a largely shaky Catalan backline throughout 2020/21. Seen as the future of their defensive core and a potential Gerard Piqué heir, Araújo warrants it with a top appearance in most of our analysed metrics.

The 22-year-old is excelling in his defensive output, including possession-adjusted defensive duels, successful defensive actions as well as boasting a great sense of positioning. Offensively, however, he is somewhat lacking as his on-the-ball ability is not on the level of some other defenders.

Still, that’s a minor blip on an otherwise stellar profile that could yet see improvement in the upcoming season. If paired up with a fairly progressive centre-back partner, Araújo’s deficiencies might not matter too much. 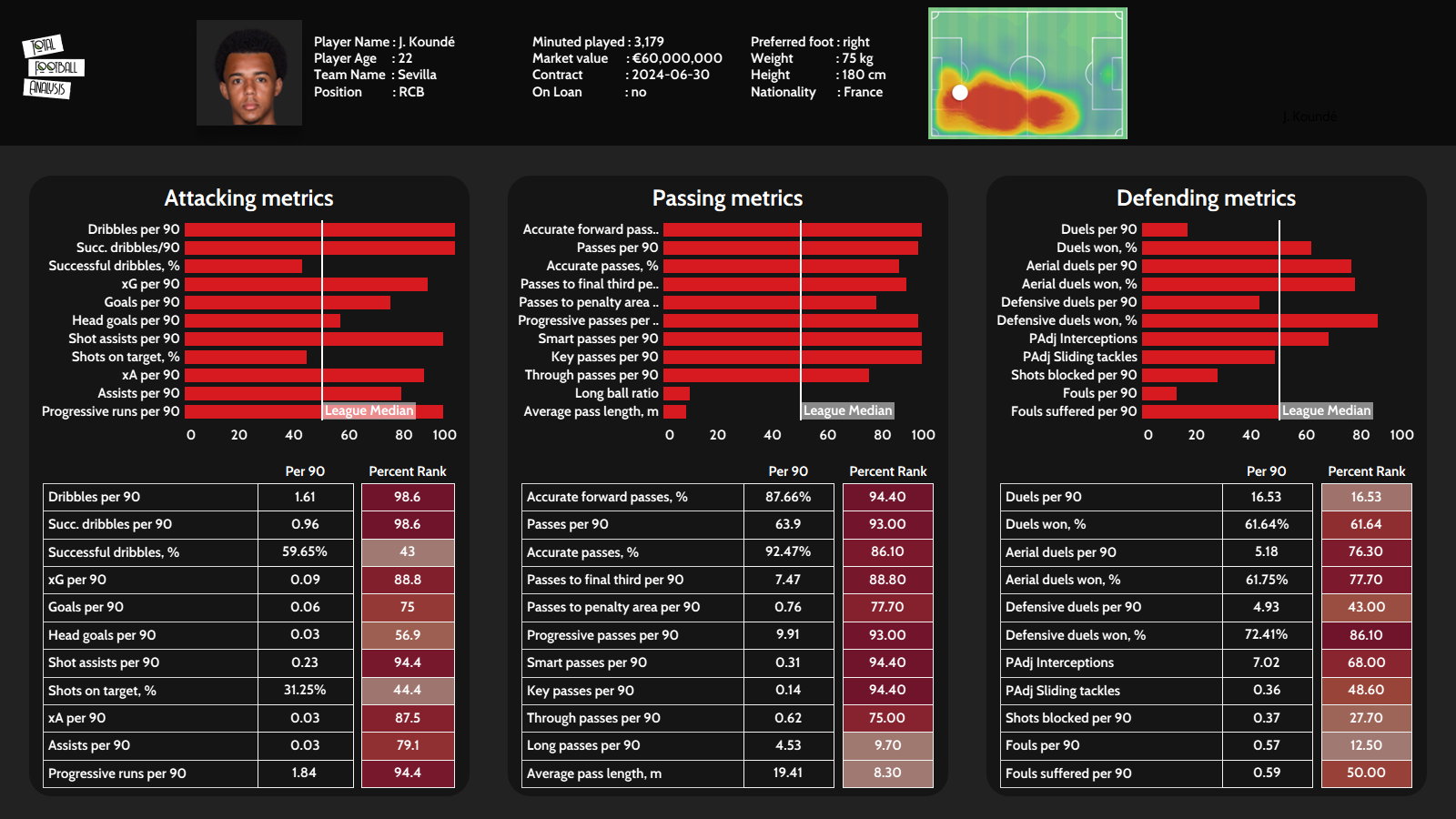 Another star performer in the young category of La Liga defenders is Sevilla’s Koundé. The 22-year-old Frenchman is most likely the most well-rounded profile on the list and has made top appearances almost across the board of our data analysis.

While he may lack in the defensive phase when it comes to pure statistics, Koundé still excels in other areas, including aerial ability and progressiveness, which are often attributes you’d hardly find together in a single profile.

Koundé still does fairly well when engaging in defensive actions but his volume is below-average even after being adjusted for Sevilla’s dominant possession values. However, efficiency may here be of more importance than the volume itself so this is by no means a big stain on his profile. 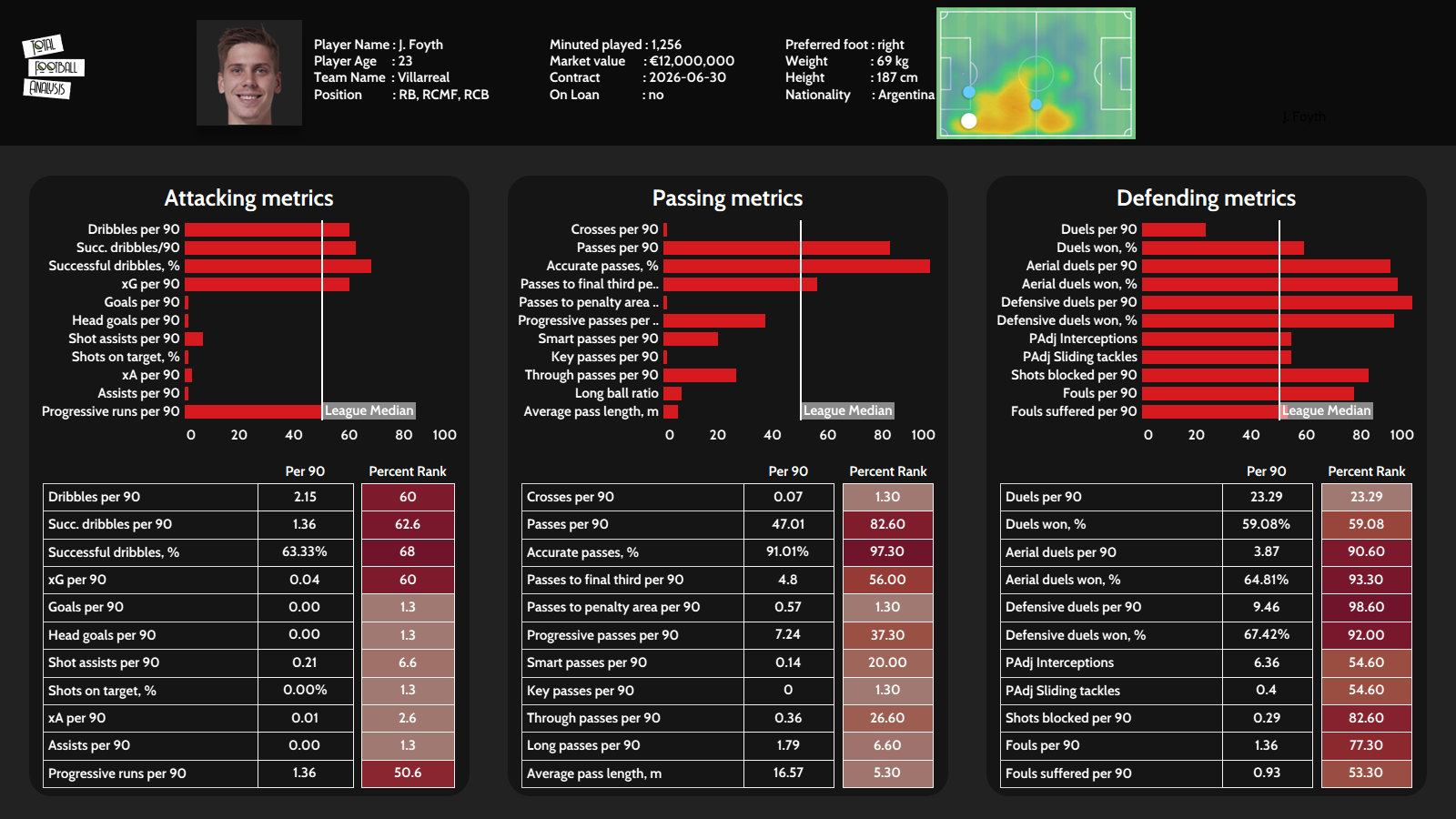 Perhaps the most surprising entry on this list is Villarreal’s Foyth. While he is not necessarily someone you’d include among La Liga’s top defenders, the data suggests he’s been performing admirably for the Yellow Submarine. Considering the team’s exploits in Europe and a valiant run in the domestic league, it’s only natural to assume you need a strong core.

Foyth provides them with exactly that. The Argentine is a versatile player, able to occupy a centre-back and a full-back position, making him that much more worthy of a place on the shortlist. His defensive output, both in the air and on the ground and both in terms of volume and success rate, is quite impressive while a marginal difference in values meant he would miss out on the top quadrant in the positioning chart.

While he may be among the defenders who foul a lot and get booked often, he makes up for it with decent progression statistics, ranking above-average in progressive actions per 90 minutes. There’s a lot to like in Foyth’s profile as it seems to be well-rounded and mainly above-average across the board.

Militão is one of the players who could’ve easily made the shortlist but ultimately missed out due to some marginal differences in profiles. The Los Blanco centre-back is another player whose name was present in most of the charts, much like the first two players in the shortlist, but simply due to there being two other clear centre-backs on the list, the 23-year-old was ‘relegated’ to the honourable mentions list.

The Brazilian tallies excellent results in successful defensive actions per 90 minutes and is just below-average in the sheer volume of defensive duels per 90. His aerial ability, including the attacking phase, is among the top youngsters in the league while we can also find him among defenders who are not booked often despite committing a relatively high number of fouls.

Similarly, while not overly technical on the ball, Militão still records decent figures in progressive actions, albeit rarely passing into the danger areas of the pitch. With the departure of Ramos and potentially Raphaël Varane, the 23-year-old might be chosen to lead Real Madrid’s backline for years to come as their successor.

At the end of the day, seeing an Atlético Madrid defender on a list of this kind was never going to be a huge surprise. But Lodi warrants it with his consistent performances throughout Rojiblancos’ title-winning season in 2020/21. It is rare for a full-back to register high-value statistics across the board as nowadays, wide defenders are often very one-dimensional.

Lodi, however, is not. The 23-year-old’s name appears in the top quadrant for defensive solidity, recording impressive defensive results with quite a large volume of duels as well. He is not dominant in the air and his positioning may need some work but he’s still above-average in PAdj interceptions.

The attacking phase is also where his profile shines the most. Among other U23 La Liga defenders, he is among the most progressive and the most creative names on the list, excelling in both categories. Just as Militão before him, he could’ve easily made the shortlist too.

When everything is said and done, the final pick of the honourable mentions list could’ve been any of the outlier full-backs as most of them were fairly one-dimensional and highly attacking-minded. Foyth and Lodi were different as their profiles were more well-rounded, thus earning them a somewhat higher place in the final rankings.

Emerson’s 2020/21 Real Betis campaign was good enough to warrant a permanent transfer to Barcelona and upon dissecting his statistics and data for that season, it’s easy to understand why. In a rather surprising turn of events, the Brazilian tops the charts in defensive output when adjusted for Barcelona’s possession (not Real Betis’!), has a decent aerial presence along with good, albeit not top, positioning.

In attack, the 22-year-old is electric and quite progressive, although once again not exactly outperforming the metrics’ outliers. Again, this makes for a fairly well-rounded profile that’s good across the board but not exactly elite in any of them. All of that could change once he joins Barcelona for the Catalans’ 2021/22 redemption season, for better or worse.