This tactical analysis will have two primary focuses. Initially, we will take an in-depth look into Noelle Maritz, Arsenal Women’s new signing following her spell at VfL Wolfsburg. We will look at her in both the attacking and defending phases for Wolfsburg.

Following this scout report, we will go into detail about how Maritz will fit into this Arsenal side, and delve into the tactical flexibility this move brings for Joe Montemurro in setting up his side in the upcoming campaign. Maritz’s ability to play in multiple different positions in various different set-ups will allow Arsenal Women to evolve their tactics further moving forward.

Playing at Wolfsburg, a lot of Maritz’s involvement comes in the attacking phase of play. Her versatility is her biggest asset in the German side’s continuously moving tactical system. In this section, we will detail her roles we see Maritz occupy as Wolfsburg look to break down opponents.

Over the past campaign, Maritz has played in an abundance of roles. Capable of playing on both the left and right-hand side, which will have intrigued Montemurro greatly, she has played in both the full-back roles and wide forward positions on each flank. Below you can see the heat map of Maritz over the previous campaign, which highlights her time spent in multiple positions.

When Wolfsburg set up in their opposition’s half, their primary shape is a 3-1-6 formation. One full-back drops in to help protect the central defenders for counter-attacks, while the opposite full-back steps forward into the highest line and provides the width on this side. Maritz is capable of playing in each of these roles, which offered Wolfsburg a great amount of tactical flexibility. As they moved possession around looking for space to unlock the opposition’s defensive block, these two players can move interchangeably, which allows them to create overloads in the wide areas before the opponent has time to react with their defensive shape.

When Maritz occupies the wide area in the attacking line, she is an extremely dangerous threat from crossing positions. She averaged 3.31 crosses per 90 this past campaign. This number is on the lower side because of her role in the rest defence oftentimes; however, she has a 43.3% accuracy percentage on these, showcasing her eye for a cross in these areas, and a potential to be a primary attacking threat for Arsenal in a new system. The most standout statistic for Maritz is her 0.44 assists per 90, showing that along with her crosses finding their intended target, this is often in a dangerous position that results in a major goal-scoring opportunity.

This passing ability along with her dribbling skill make her a major asset in the final third. Averaging 3.92 dribbles per 90 with a 45.1% success rate, we can see these two together in action in the example below. In the first image, Maritz receives possession on the far right side as she is playing right-back in this match. As the pass comes to her she waits and allows the defender to get drawn in anticipating a cross. 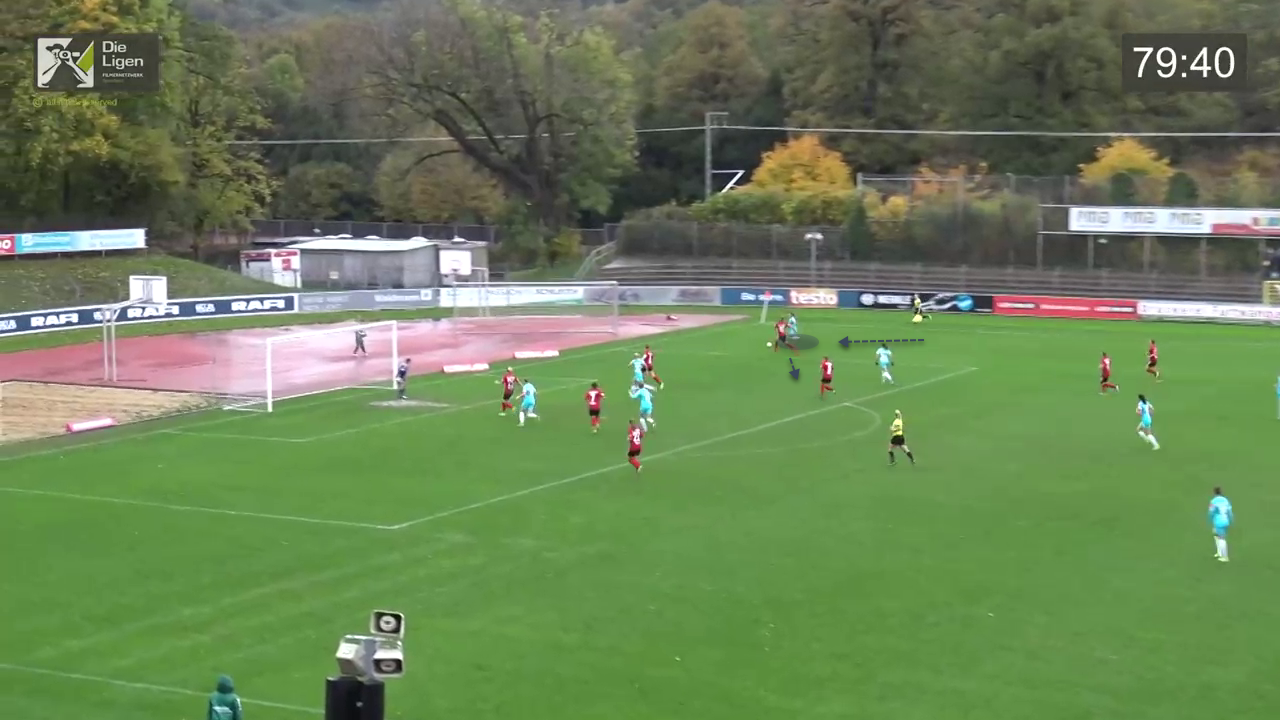 Maritz fakes the cross and cuts back into the box, taking the defender out of the equation with her one quick movement. Now she has time and plenty of space to wait for her attacking teammates in the penalty area to create separation from their markers and present a passing option, which Pernille Harder does by cutting back just outside the six-yard box for a simple tap-in following Maritz’s pass. 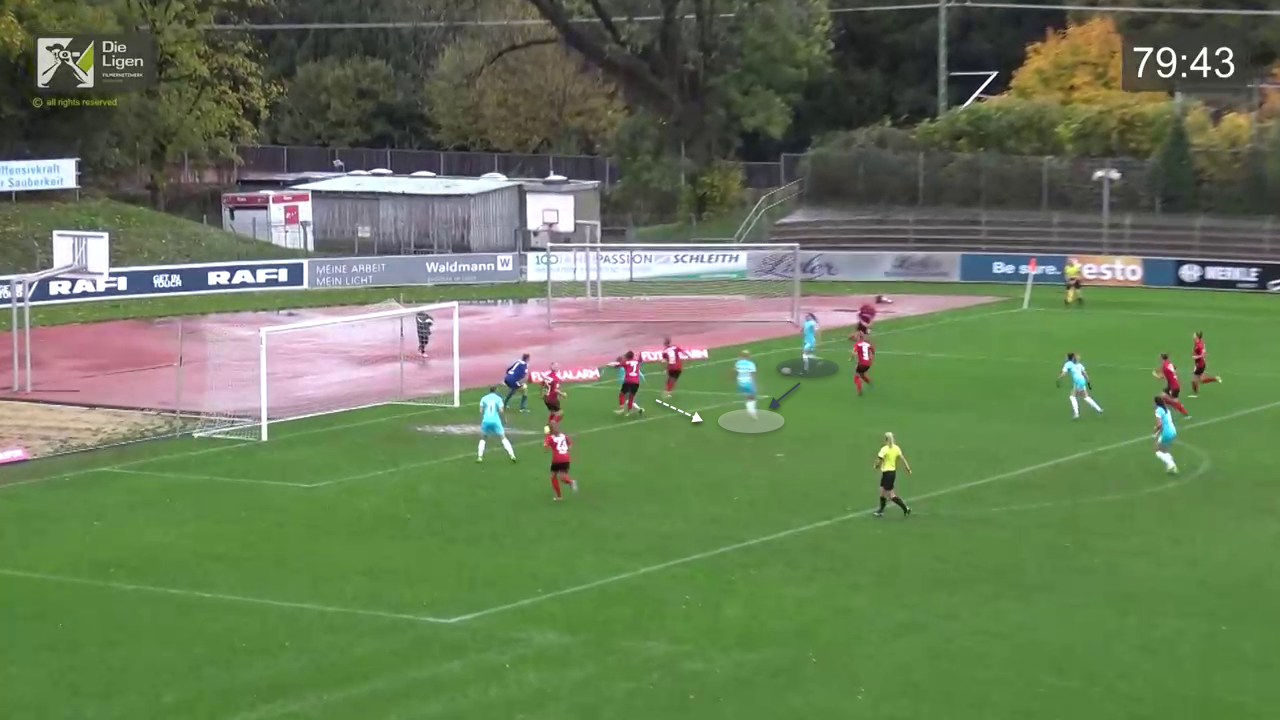 Maritz’s experience in a possession-based side will work to her benefit as she transitions into London. Montemurro’s side seeks to dominate possession against every side they come up against. Because of this, a considerable amount of her defensive work comes in the transition phase directly after possession is lost. Wolfsburg and Arsenal are very comparable in their high pressing styles, both posting some of the lowest PPDA’s in Europe.

Maritz’s defensive awareness and anticipation allow her to be a major asset in this phase. Per 90 over the course of the previous campaign, she was involved in 6.01 defensive duels and had a very impressive 71.6% success rate. Her greatest strength comes in her ability to anticipate play and defend in various areas of the pitch. 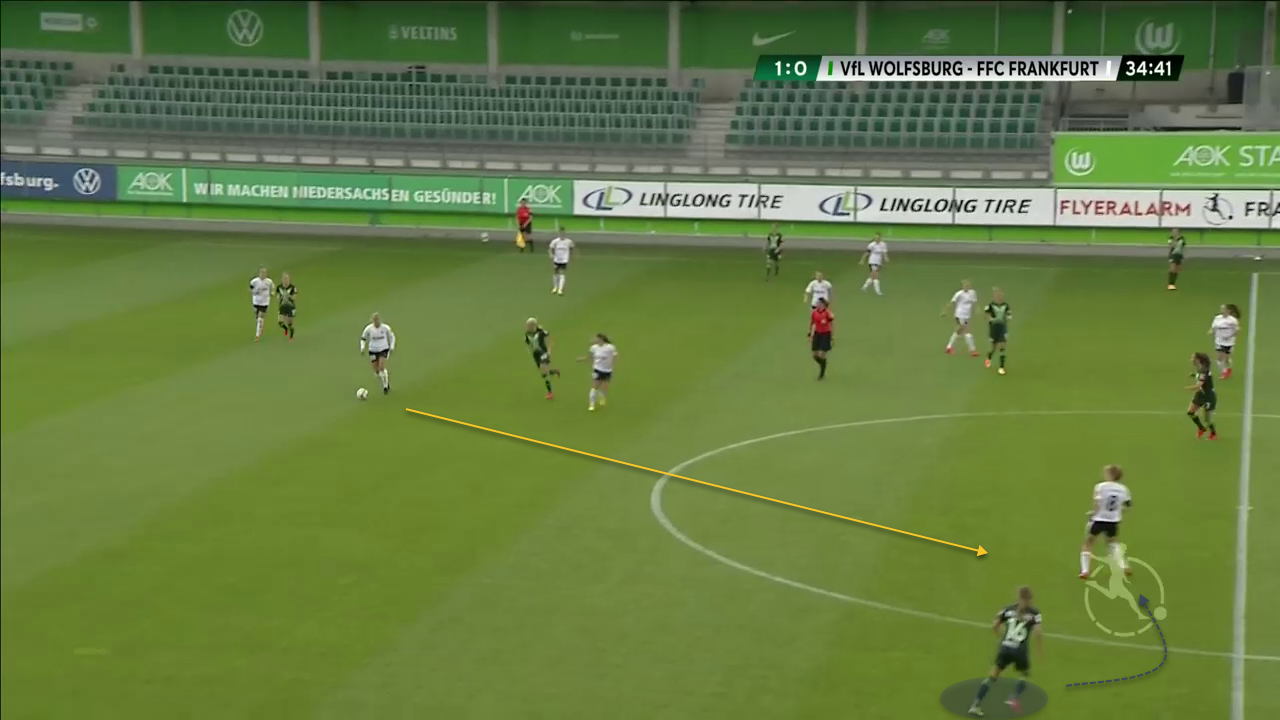 In the image above, Wolfsburg have lost possession in the middle of the pitch. Maritz holds her position in the half-space and scans the space ahead of her looking to pick out where the play will develop into. She is smart enough to leave enough space between her and the opponent’s attacker in the centre of the pitch to make it seem as if the pass is safe. 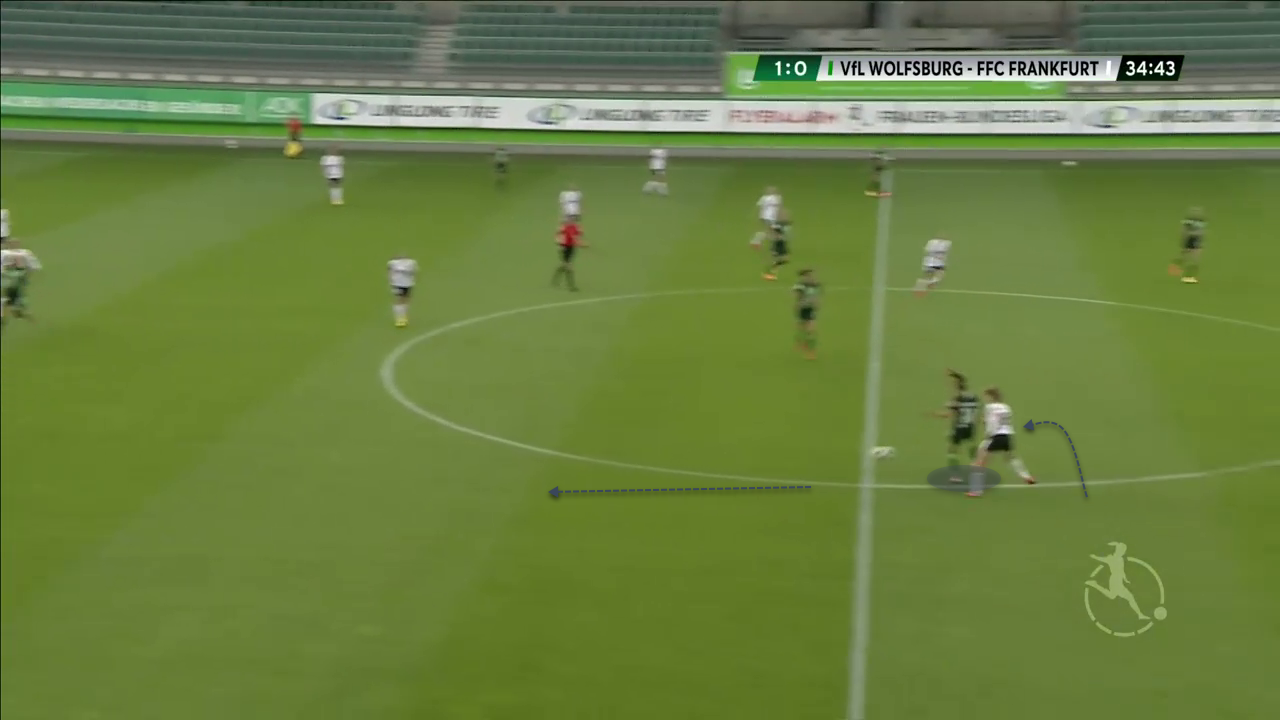 However, once this pass is attempted, Maritz has jumped in and intercepted it from behind. Possession is won back and Wolfsburg are able to look to progress up the pitch with opposition out of their low defensive block.

With the addition of Maritz along with Stephanie Catley, Montemurro has clearly emphasised the full-back roles as the place to improve upon following a disappointing league campaign. With this, it is important to identify why this is the case, and how Maritz’s skill set will go towards rectifying this in the upcoming campaign.

Arsenal Women primarily focus on attacking through the middle of the pitch. Their 4-3-3 formation is structured to provide as much attacking support in this area as possible. Wingers Bethany Mead and Danielle Van de Donk move into the half-spaces to provide support to the number nine Vivianne Miedema. Slightly deeper, we see a variety of different shapes from the midfield structure, with Lia Walti’s presence at the base of the midfield being the only constant. Ahead of her, the likes of Kim Little, Jordan Nobbs, and Jill Roord will typically occupy higher areas closer to these inverted wingers. This shape only changes if Arsenal struggle to consistently progress through the first phase of their build-up, in which case one of the two advanced central midfielders will drop into the deeper line alongside Walti to add an extra dimension in this phase.

With this emphasis, the full-backs are often responsible for providing the width for the Gunners, as you can see in the pass map above. Their first choice options in these positions, Katie McCabe and Lisa Evans, are both natural wingers and excel in this role of staying close to the touchline in more advanced positions in order to keep the opponent’s full-backs true to their positions and stop them from cheating towards the centre and restricting space for Arsenal’s creative attackers.

While there was a multitude of attacking benefits from this choice of personnel, against bigger sides it was often their undoing. In head-to-head matches against Manchester City Women and Chelsea Women, it was the space in behind these marauding full-backs that were taken advantage of. In situations where two of the central midfielders were pressed into advanced positions to link up with the inside wingers and striker, it often left Arsenal with only Walti sitting in the rest defence in front of the two centre-halves. A major reason for this was while the two wingers were able to take their skills and translate them well into these wide full-back roles, they d0 not translate the same in inverted full-back roles. Their defensive awareness was not up to the level required to be effective here, so they were instead allowed to maintain wide positions to make use of their talents.

Now, looking at Arsenal’s needs for improvement and Maritz’s abilities we have seen during her time with Wolfsburg, this move makes a lot of sense for both parties. In both the attacking and defending phase of the game, the Swiss international will offer Arsenal Women a very dependable player who addresses issues we have seen in the past.

First, we will look into the attacking phase of the game. As mentioned in the initial section, Maritz has experience working in an advanced role out on this flank. Her attacking numbers represent a player who is very efficient in the final third when she is moved into this position. This offers Arsenal the option in playing a similar structure as they used this campaign, but in Maritz they have a player with more defensive awareness than the usual names in the past.

Alternatively, there are different systems we could see Montemurro look to deploy as the London side look to bring the title back to their side of the city. In Maritz, one of the biggest assets the side now has is her versatility with different roles from left-back. Earlier we showed a pass map from Arsenal Women this past campaign. The focus on the centre of the pitch is evident with the average positioning of the attacking players, and the full-backs are left to provide options wide.

We will take this and compare it to a Wolfsburg pass map, where we see Maritz used in a different setup. Instead of the full-backs being the only players holding the wide areas, they have a winger who stays closer to this area and offers the full-back the ability to switch between holding an inside and outside position.

The addition of Maritz could be a step into moving into a system more similar to this for Arsenal. If another winger was brought into the side, they could switch their formation into a 4-2-3-1 formation, which could offer multiple benefits. First and foremost, it would allow Montemurro to play Van de Donk in a more familiar role for her as the number 10, where she is at her best. The presence of the Dutch international in this space directly behind Miedema would allow the wingers to play in more traditional winger roles, working out wide with the full-backs as we see Wolfsburg do.

As well as giving more support in the attacking phase of the game to the full-backs, it would also allow Maritz to drop into Arsenal’s rest defence structure when the winger held the touchline. The left-backs defensive ability would give Arsenal a massive boost in preventing and stopping counter-attacks, which undoubtedly would have been in Montemurro’s mind as the two clubs worked to an agreement for the transfer. 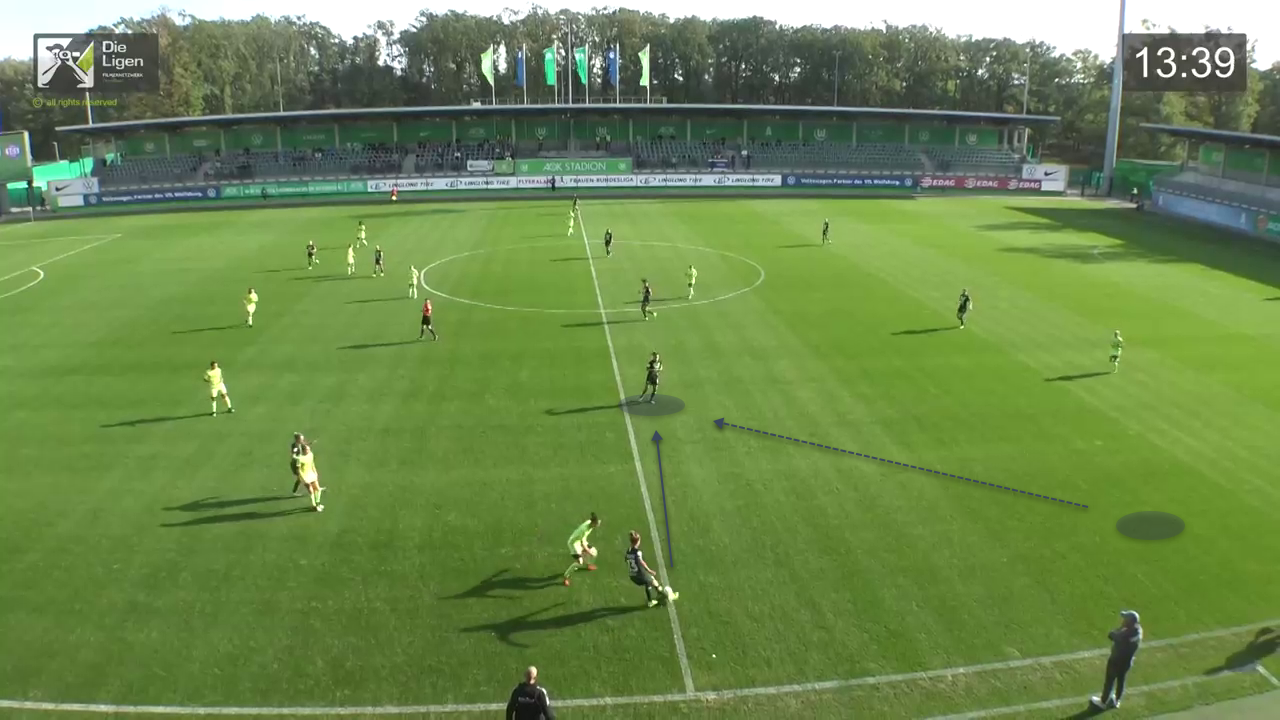 Her passing ability in possession will also make her an asset should she play as an inverted full-back at times for Arsenal. In the image above Wolfsburg are pushing forward after possession is won back. Maritz moves into a central area to provide support with her teammate providing the width instead. She is found in this position and has plenty of time and space to pick her head up and look for a pass into one of her more advanced teammates in behind the opponent’s defensive line. 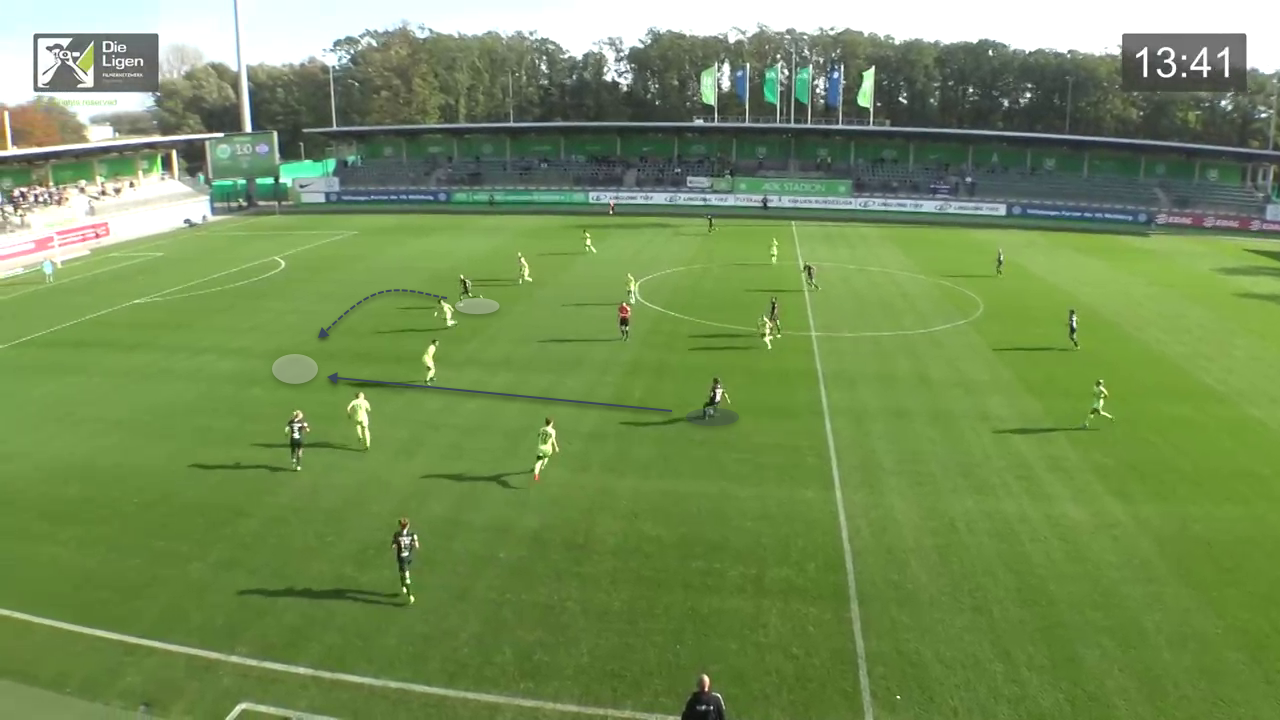 Following a disappointing campaign, and with sides all around them strengthening as we head towards a new season, Arsenal have had no time to sit around. Instead, they have been busy in the transfer market identifying players to bring in that provide solutions to problems they encountered leading to missing out on Champions League qualification.

In Noelle Maritz, Montemurro has brought in a traditional left-back who is as good defending as she is moving forward. This will bring more balance to an Arsenal side who lacked this at crucial times in major matches. As well, her versatility gives her new side a different array of options to look at using in their tactics as they work to recover their dominance in English football as shown in this analysis.