Nico Gonzalez at Argentina scout report: the movements that can make him the perfect partner for Messi

When Argentina faced Chile in their Copa América debut last Monday, there was a big surprise on their starting eleven. The 23-year-old winger Nico González, who plays for Stuttgart in the Bundesliga, started ahead of players as important as the new FC Barcelona signing Sergio Agüero or PSG’s star Ángel Di María.

But with the game ending 1-1 and Argentina failing to score apart from Messi’s fantastic free-kick despite having 15 shots and 2.3 xG, all eyes have turned to the players who failed to score from the good chances created and Nico González was one of them.

Nico González started as the left winger in Argentina’s 4-3-3 but his movements weren’t limited to the left-wing as he can offer a lot more to the team. He has pace, work rate and an eye for goal and Scaloni thinks he can contribute that to the team.

As we’ll see in this scout report, Nico González has a lot of variety in his movements and he can’t be limited to a left-winger when speaking about him. If we see his heatmap from this match below, We see how he gets more central as the attacks advance, providing width when his team builds up and trying to get into scoring positions when they advance. 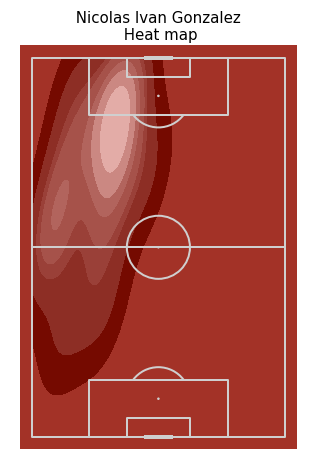 In this tactical analysis, we’ll analyze Nico González’s movements and what they create for him and his teammates, focusing on his importance for Argentina’s tactics.

When Argentina is building its attacks, Nico González focuses on providing width and depth so his teammates have space to play in. He’s capable of playing both wide and hugging the touchline or in more central positions, showing excellent coordination with the left-back in his movements. Ajax‘s Tagliafico and he were a constant thread in the first match and a partnership Argentina should look to keep exploiting.

When the Tagliafico advances and provides width, Nico González gets central and plays in the left half-spaces, forcing rivals to make a decision and often opening up spaces on the left-wing

We can see below how Nico González runs from the wing to a central position and Chile’s wing-back follows him, leaving Tagliafico free on the left side of the pitch. 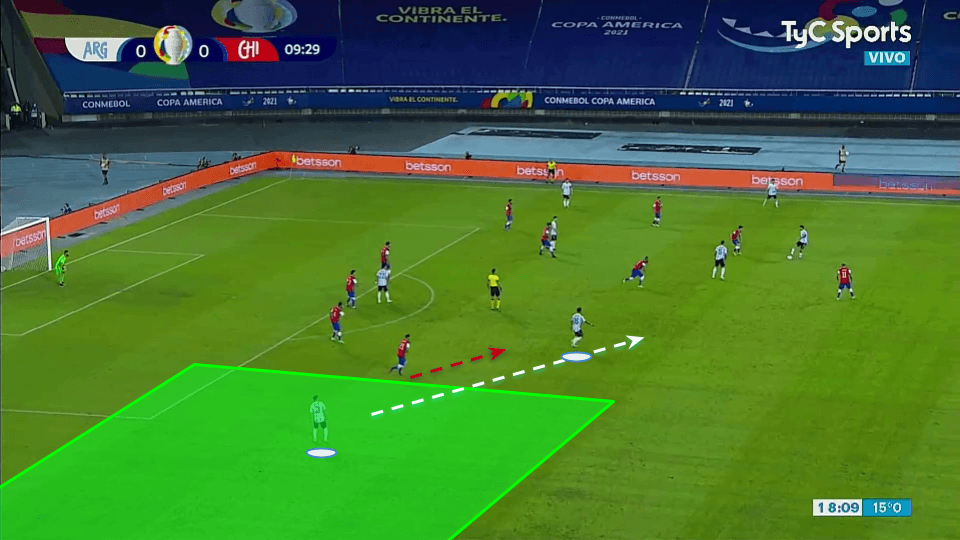 When he receives the ball in this position in the left half-space, he also attracts the attention of the defenders around him so the left central midfielder also has space to advance as the rival midfielders will also tend to mark him. Nico González has a good overview of the pitch so is capable of receiving, attracting player and then playing a surprising pass to a free teammate.

In the next picture, we see the moment in which Nico González receives a pass from Tagliafico. He’s between four Chilean players and all of them press him when he controls. His first touch leaves him facing forward but a nice backheel pass leaves Tottenham’s Lo Celso free at the edge of the box. With Argentina using two very dynamic central midfielders who like to get forward, this kind of play gives a lot to the team. 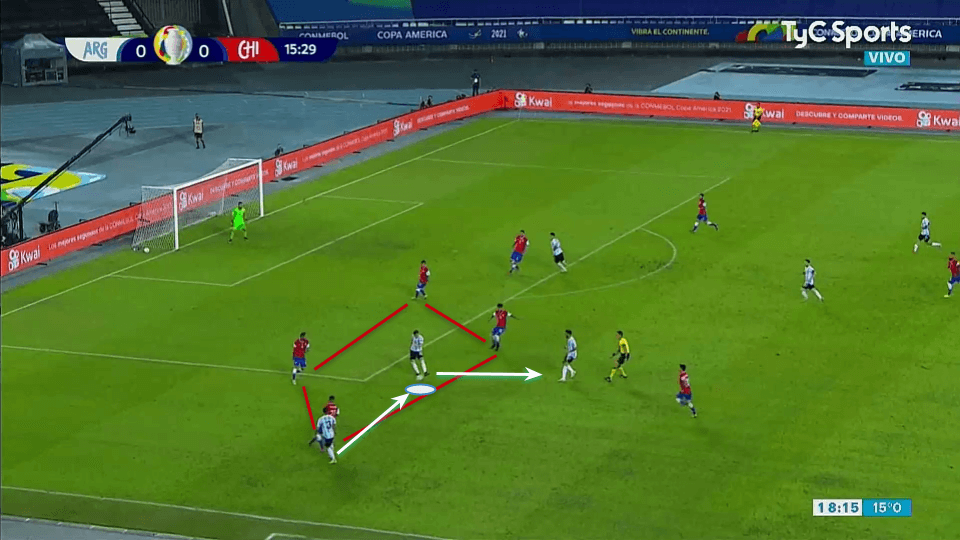 But his movements are not limited to appearing between the line and in the half-space. When Tagliafico drifts inside or the attacks are already advancing through the left half-space, Nico González provides width and runs in behind at top speed, creating easy but dangerous passing options to his technically gifted teammates.

Let’s see the next example. This time, Tagliafico drifts inside to provide an easy passing option, creating space on the left side. With Messi on the ball, Nico González starts a run in behind at top speed, getting to the ball before it leaves the pitch and provoking a foul and a yellow card. 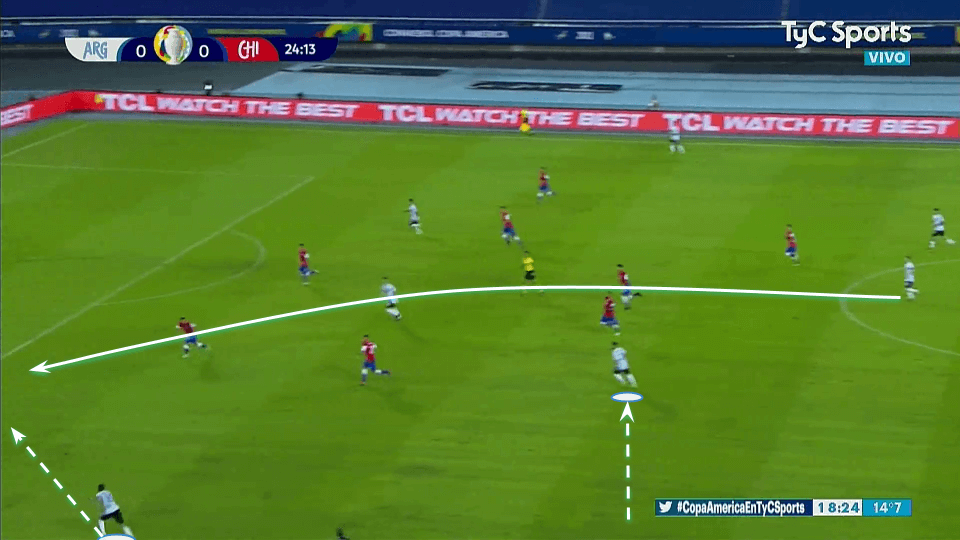 Again below, we see Nico González running by the touchline. This time, Lo Celso is carrying the ball forward through the left half-space and Nico González’s movement drags the Chilean player so he has space to keep advancing. It’s interesting to note that he keeps making adequate movements even when he doesn’t receive the ball as they’re beneficial for the team. 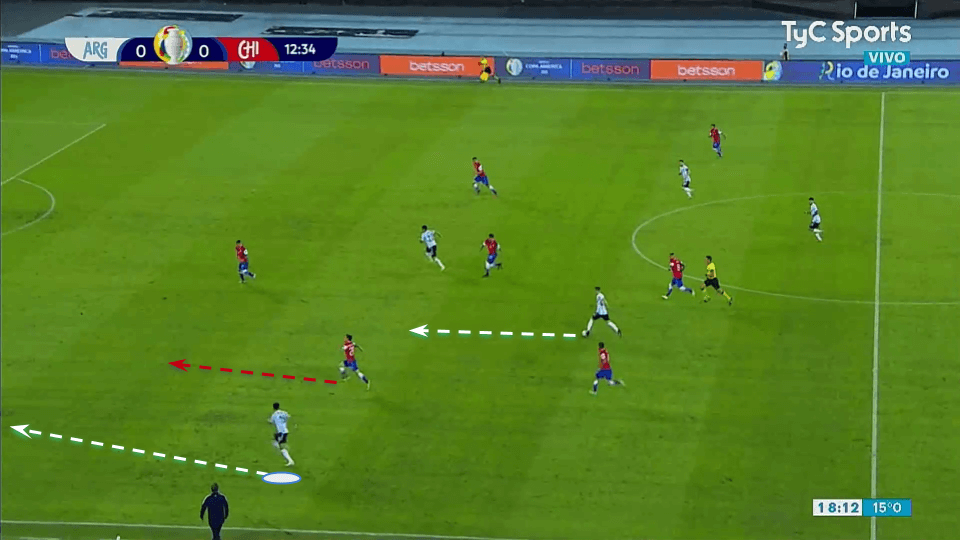 Another way of creating space and moving the rival defensive line is his runs in behind when Argentina play long balls to Lautaro Martínez. On this occasion, Nico González runs in behind to receive a possible head flick but also to liberate space around the Inter striker so he can bring the ball down and play with players coming from the second line or even controlling and turning. The next image shows exactly this. 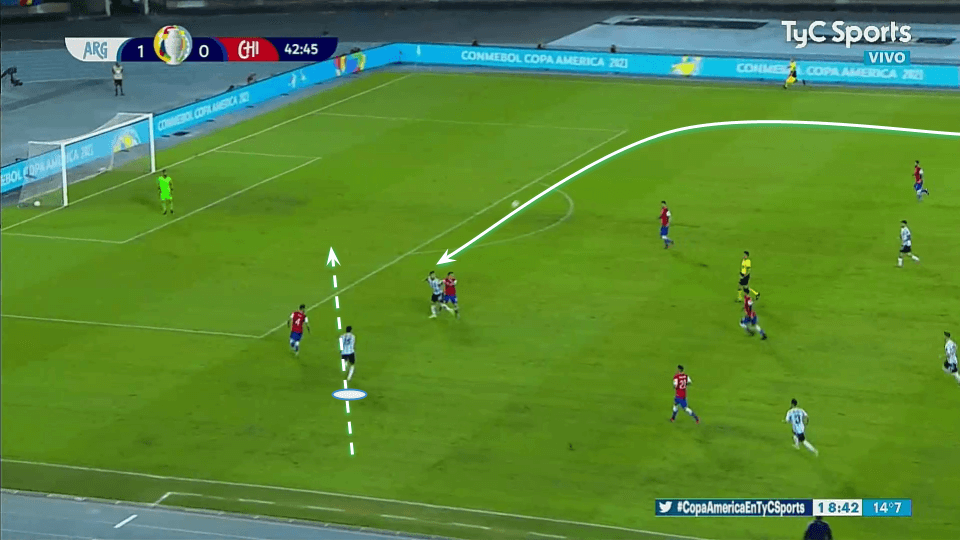 When looking at Nico González’s movements, we see a lot of variety and great coordination with his teammates. He doesn’t feel frustrated when he doesn’t receive the ball and continues running at top speed every time his team needs it.

Getting into scoring positions

We saw in the previous section of this tactical analysis that Nico González has the intelligence and work rate to adapt to his teammates’ movements and make the movements to create space for them to play more comfortably. But his movements are much more than that and he also gets into great scoring positions as we mentioned in the first section of this scout report.

His diagonal runs from the left side are perfectly timed and he accelerates or changes his pace with intelligence to create the maximum separation with the defenders without getting into offside positions. To do this, Nico González starts his movements with a parallel run to the goal line and only changes directions to go towards the goal when the ball is played so he gets away from defenders while staying onside. Let’s see some examples from the first Copa América match against Chile. 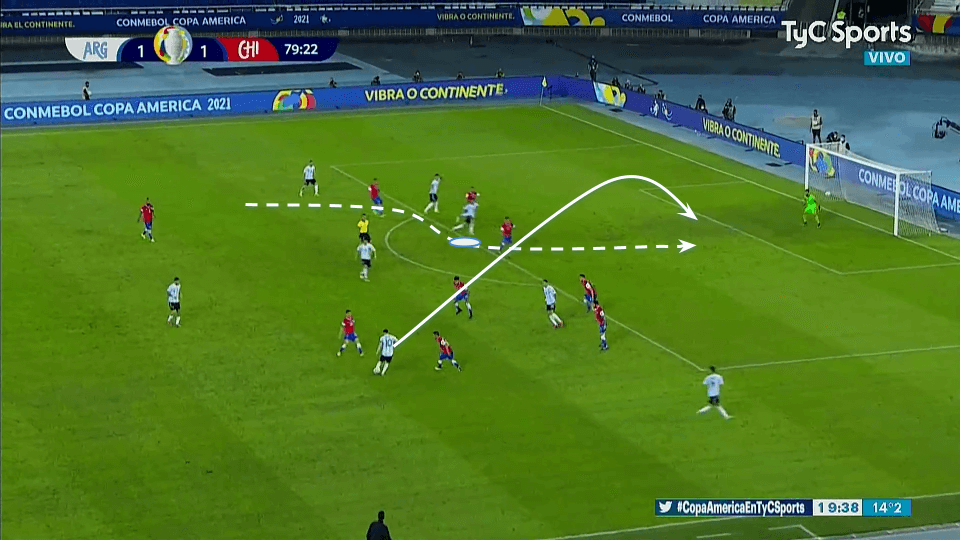 The sequence of the second example is a similar run but in a different situation. This time, Lo Celso is driving the ball forward through central areas and Nico González running by the touchline. When the Chilean centre-back steps out to stop Lo Celso, Nico González changes the direction of his run and gets behind him and into a great scoring position. Lo Celso plays the right pass but again Nico González fails to score when facing the goalkeeper. 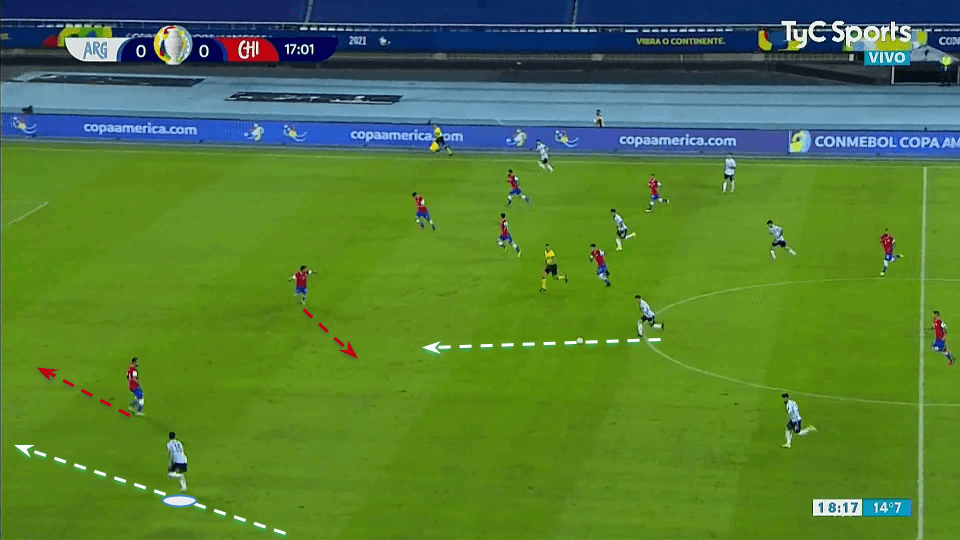 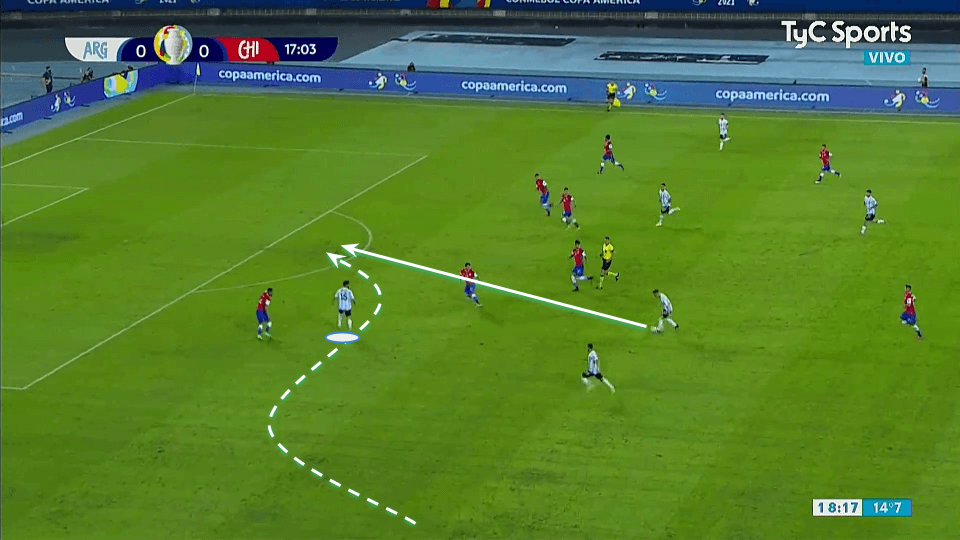 When the attacks come from the right side, Nico González makes good runs to anticipate and getting into good positions in the box. The principle he applies to these movements is similar to the one explained before in the analysis: he starts behind his marker and accelerates in the exact moment to prevent them from reacting.

He uses similar tactics in set-pieces, which result in him being a very dangerous player there despite not being especially tall standing at 180 cm / 5’11’’. He runs towards the ball, catches the defender off guard and has great jumping power to win the aerial duel. Below we see an example of how powerful his jumps can be. 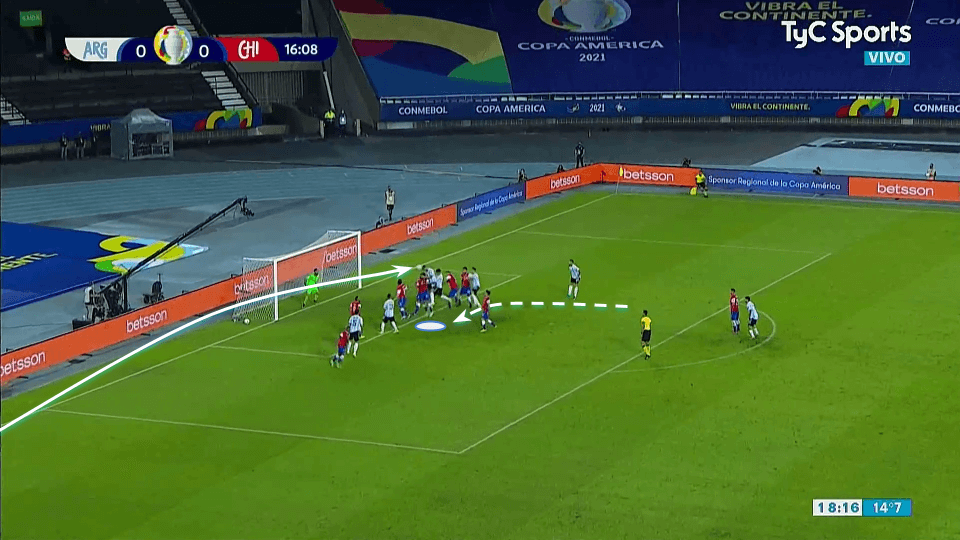 Finally, Nico González also senses danger well in transitions and uses his speed to get into scoring positions when the defenders don’t track back on time.

In the sequence shown next, we see an example of this. In the first picture, Messi has just recovered the ball after a bad pass from Chile’s goalkeeper Claudio Bravo. With the Chilean players out of position as they were building up, there are lots of space to exploit. We see Nico González on the top left corner, already sprinting forward as he has sensed danger, while Messi also gets forward with the ball. 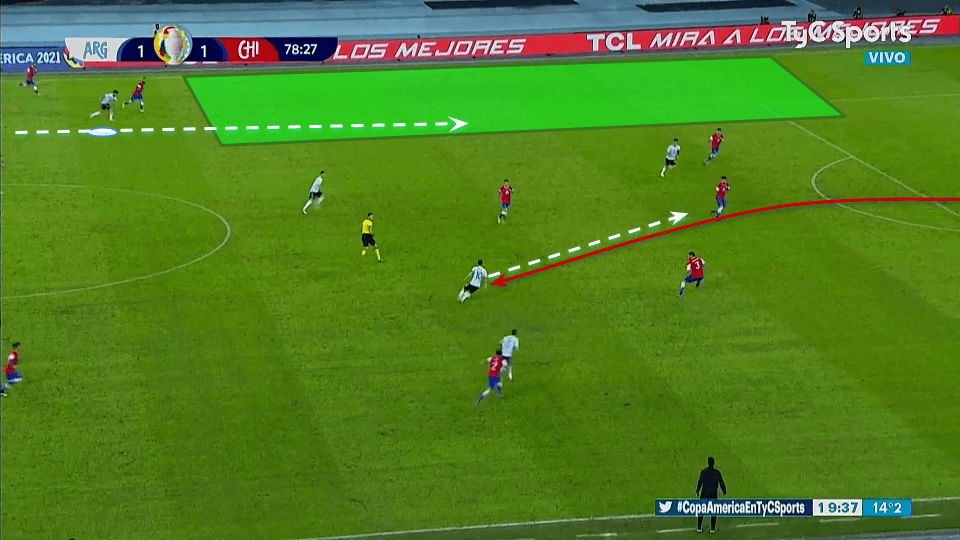 Next, after running around 50 meters in 5 seconds, Nico González receives the ball from Messi in an excellent position to shoot but he makes the wrong decisions and tries to pass it. The player behind Nico González is the same one who was slightly in front of him in the first picture, showing how fast and intense his run was. 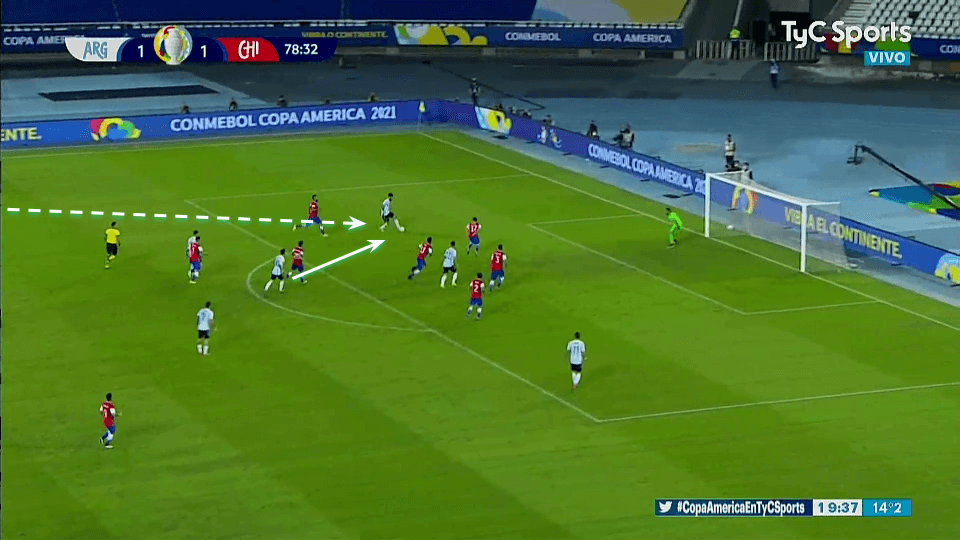 Unfortunately for Nico González, his good movements didn’t translate into goals against Chile but he was the player with the highest xG in the match (0.98) and the most shots (6) too. This shows how important he was from Argentina and only his bad finishing prevented him from scoring.

When Argentina switch to a 4-4-2 in defence, leaving Messi and Lautaro Martínez upfront, Nico González goes from being a forward to being a left midfielder, covering space on the left and following the rival full-back every time.

When looking at stats, we see how important Nico González was for Argentina in defence. He won all his three defensive challenges, 83.3% of his six aerial duels, blocked one shot and intercepted two passes.

He’s very aggressive and intense both when pressing and when tracking back, he doesn’t shy off challenges and can work for 90 minutes with excellent stamina. Capable of long efforts, he doesn’t mind tracking back after making a long intense run to press and saves a lot of work to his teammates.

Scaloni needs to decide now if he gives him confidence hoping it was just a bad game in front of goal or if he goes for a better finisher even if he may not make all the movements and create all the things Nico González does.

Players like Messi need someone who makes all the movements Nico González does both in attack and defence and that’s probably his main strength and reason to get into the team. If he manages to improve his finishing with some composure in front of the goal, he can become an unexpected key player for his country in their pursuit of silverware.