Barcelona have lost a lot of firepower following the departures of both Lionel Messi to Paris Saint-Germain and Antoine Griezmann to Atletico Madrid. Now, chances are the Catalan giants will have to trust La Masia talents to perform and carry the team as they used to in their golden years.

One such talent could indeed be Nico Gonzalez, a young midfielder breaking out of his shell. This tactical analysis will give you a scout report on the 19-year-old, dissecting his strengths and weaknesses and his suitability to Barcelona’s tactics.

Standing at 6ft 2in (188cm) and weighing 86kg, González is very tall but overall a decently built midfielder. His frame, however, does come with a price as he lacks pace and can feel lanky at times, as if still unadjusted to his size. But that doesn’t stop him from showcasing true La Masia traits through and through.

Below is a graphical representation of his player profile. We’ve used data from his 2020/21 season with Barcelona B for this analysis, as that gave us a much bigger and more reliable sample to work with. 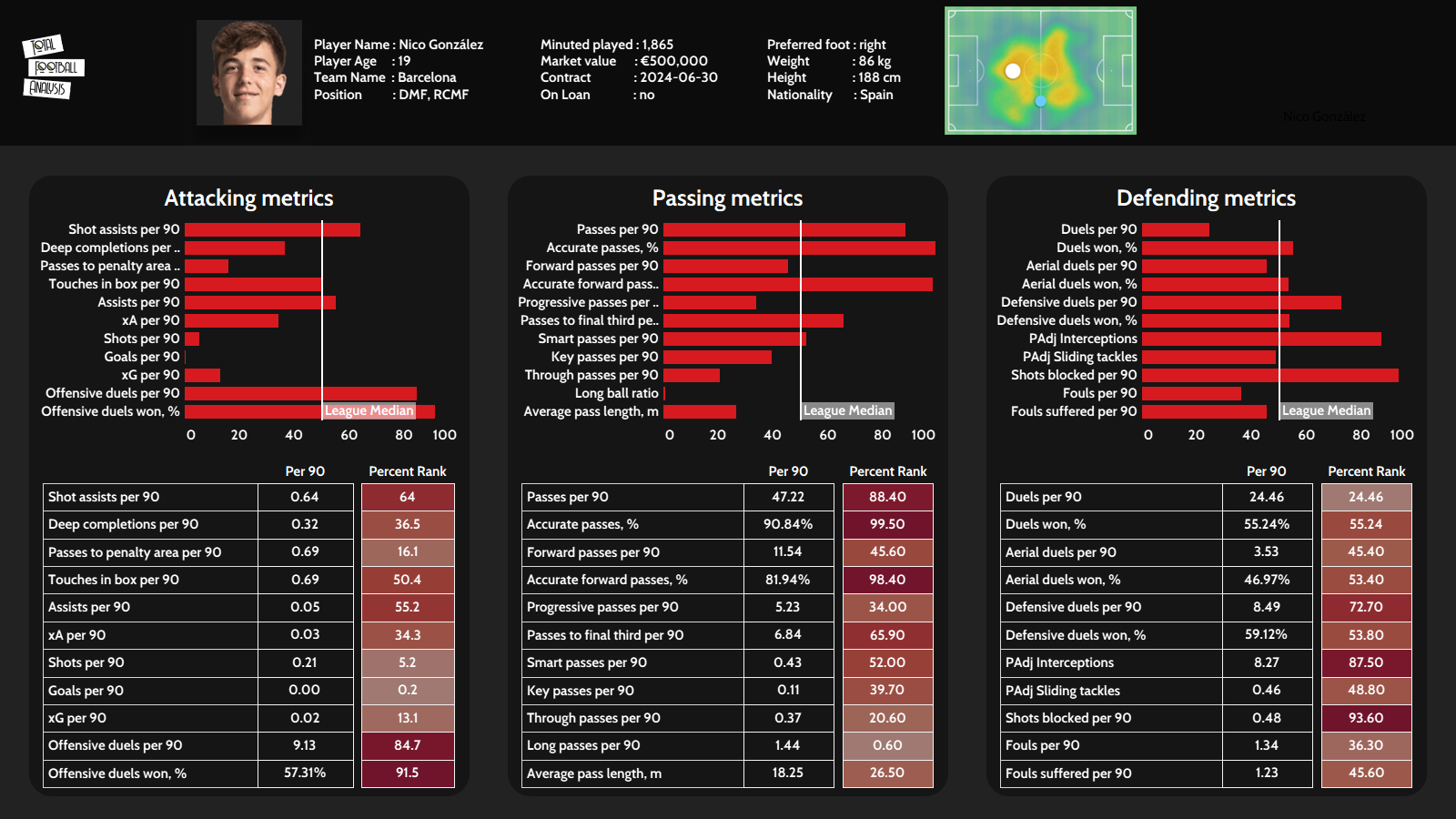 Looking at his strengths, we can immediately see González is the hub of the team as he recorded a lot of passes, orchestrating attacks from the deep. At the same time, the accuracy of those passes is excellent. His repertoire usually consists of short combination plays that aim to advance the play and bypass opposition pressure.

This is also where his excellent close control, technique and dribbling come into play. Despite his frame, González can manipulate his body well, twisting and turning to beat his marker without the use of pace. Defensively, he’s aware and tallies impressive possession-adjusted interceptions and shots blocked, indicating a great sense of positioning.

And while his final product is missing, González can score. But this aspect of his player profile remains still underused and is an area to improve.

Undoubtedly one of González’s best traits are his positioning and movement. Even though he’s still very young and raw, the 19-year-old can recognise the space that needs to be vacated and moves well to open passing channels for his teammates. Similarly, he’s always making himself available and wants the ball, which is a characteristic of all La Masia graduates.

Even though he’s a pivot and a #6 on paper, González can actually be deployed across the midfield line, occupying the deeper and the more advanced roles. In fact, while playing for youth levels at Barcelona, he was often a #8 and even an attacking midfielder due to his versatile skill set.

Looking at his map from 2020/21, we can see that he has retained some of those traits. While he is predominantly occupying deeper areas just ahead of the backline, González often moves up and occupies more advanced positions on the pitch. The action map on the right confirms this too.

This hybrid of pivot/playmaker profile suits Barcelona’s tactics perfectly as it means he can cover multiple roles and bring a multidimensional approach to their setup. González will often scan multiple times before opening himself to receive a pass from a teammate, meaning he maximises his chances of advancing play even before getting in contact with the ball.

Below is a good example of that as Frenkie de Jong drives with the ball centrally and Nico scans his surroundings, finding his next move before moving up to create a new passing channel to bypass the marker. 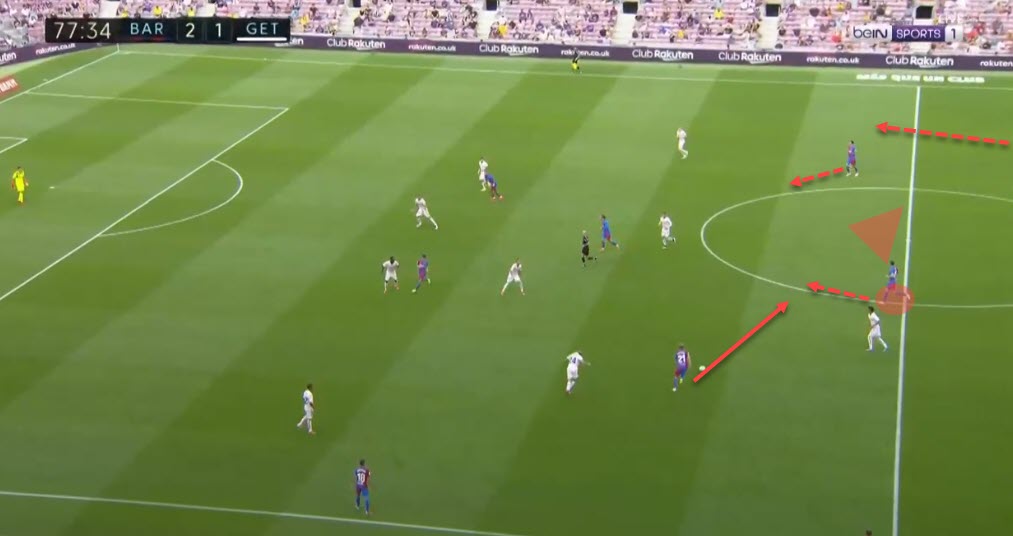 That way, as soon as he’s in possession, the young midfielder can instantly play the ball towards his other teammates. At first glance, this is a simple pass that follows suit but the far more important aspect was the scanning and recognition of what space to occupy. This is a predominant trait in his profile and one a Barcelona midfielder must absolutely have in his arsenal.

The following example will show us a bit more about it. Here, against Juventus in one of the pre-season friendlies, Barcelona are advancing up the right flank. But since the Italian squad is collapsing on them, the Catalans have to find a quick solution to the problem at hand, and Nico is ready to assist.

He advances up the pitch but then curves his run, changing the direction of his movement quickly, making himself available to receive a pass from the full-back. 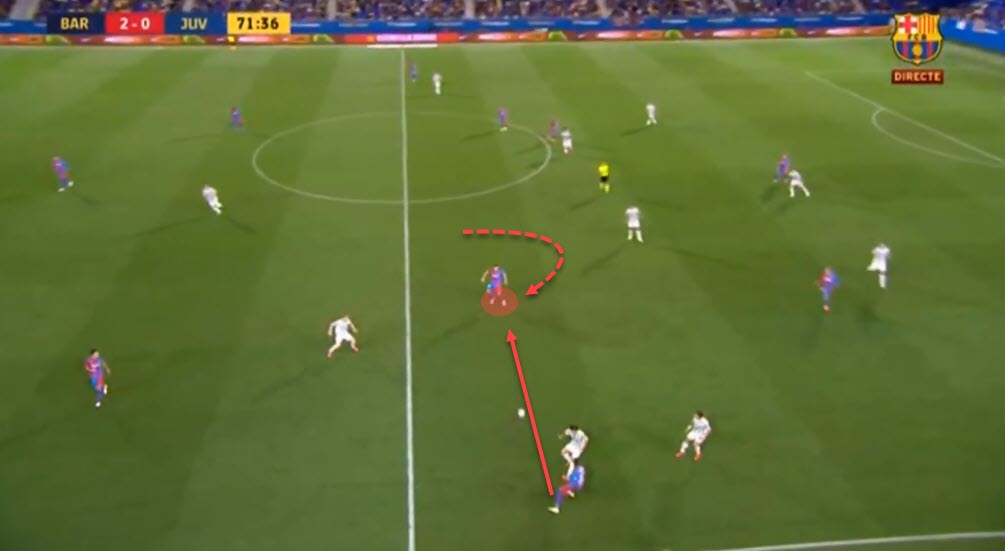 This is where the pivot in Nico is most visible. However, as we’ve already mentioned in this tactical analysis, he’s not your regular pivot. Many have already dubbed him to become the heir of Sergio Busquets and while that may still come true, some traits set the two midfielders apart.

For instance, González is someone who likes to start deep and then make runs forward with the ball at his feet. In this regard, he’s far more akin to someone like De Jong than Busquets. His excellent close control and dribbling mean he’s very good at this and can beat his marker even in dangerous areas.

Below is a great example of this trait. Nico receives the ball deep from the backline and while often his first instinct would be to pass it along quickly, he starts to run with it and links up with the more advanced teammates.

And this is not an isolated case either. The #8 in him encourages González to make those runs and his skill set allows it. Interestingly, despite lacking any serious pace, which is a small flaw in his profile, he is the type of player who attacks space and knows how to move in the more advanced areas of the pitch.

In the following example, for instance, he recognises where he needs to move to continue the attack. The same thing will happen when Barcelona pin the opposition down into a low block. Nico will regularly make runs beyond the defensive line. 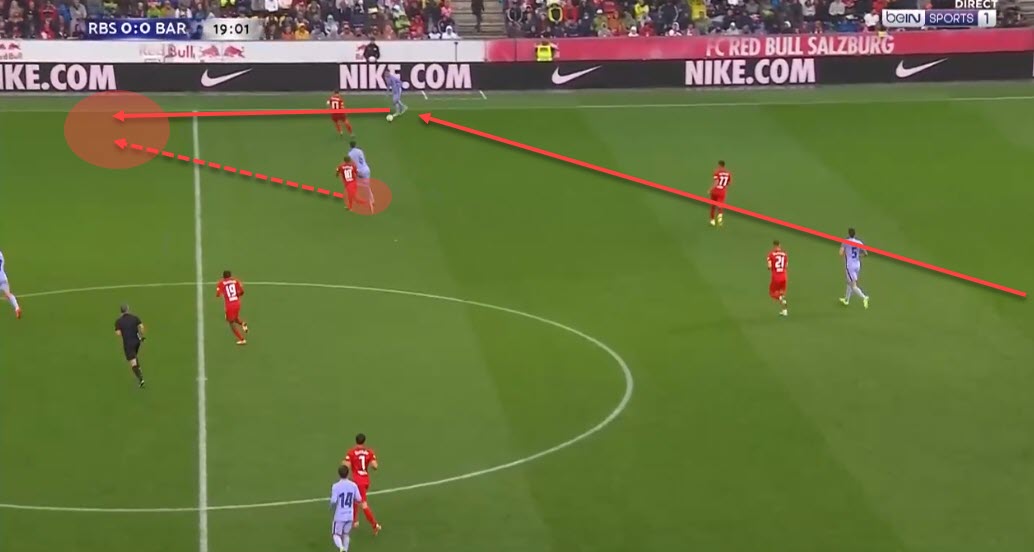 You won’t find him on the scoresheet as often but just the willingness to attack space and get into good positions to shoot and score are great signs for such a young player.

Another aspect of Nico’s player profile we have to mention is his passing game. Barcelona midfielders have to be excellent on the ball and display great vision and technique. All of which, fortunately, is a part of González’s skill set.

Below are the pass maps from Barcelona’s four pre-season games in which the 19-year-old had a big role to play. Despite playing in their opening couple of La Liga games too, the sample was way too small to analyse, leaving us with the friendless as the much better scope of his abilities and tendencies. 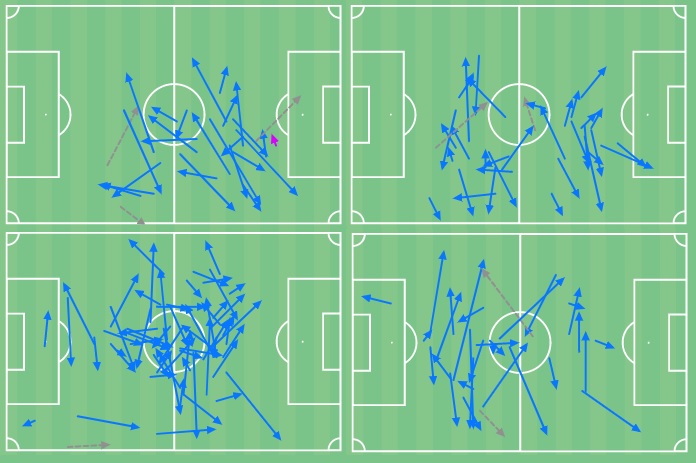 We can immediately see that González is more of a ball-recycler and retainer than a creator. Admittedly, this is usually the role of a Barcelona pivot but he seems to have been opting for safer passing options when playing for the seniors. Of course, it could be that he’s still adjusting to a much higher level of play but overall, we’re talking about a conservative passer.

With 47.22 passes per 90 minutes last season and incredible accuracy of 90.84% and accuracy of 81.94% for forward passes specifically, Nico tops the charts across the board. When it comes to the latter two categories regarding the accuracy, the youngster was in the top 1-2% in the league.

So we’ve concluded he’s an elite recycler and retainer of possession but what about his technique and close control? By analysing his passing tendencies, I’ve noticed Nico does tend to take too many touches when controlling the ball and also often does it with the far foot. He’ll use one touch to control the ball with the far foot and then pass with his second or third touch, preferring his dominant right foot over the left. 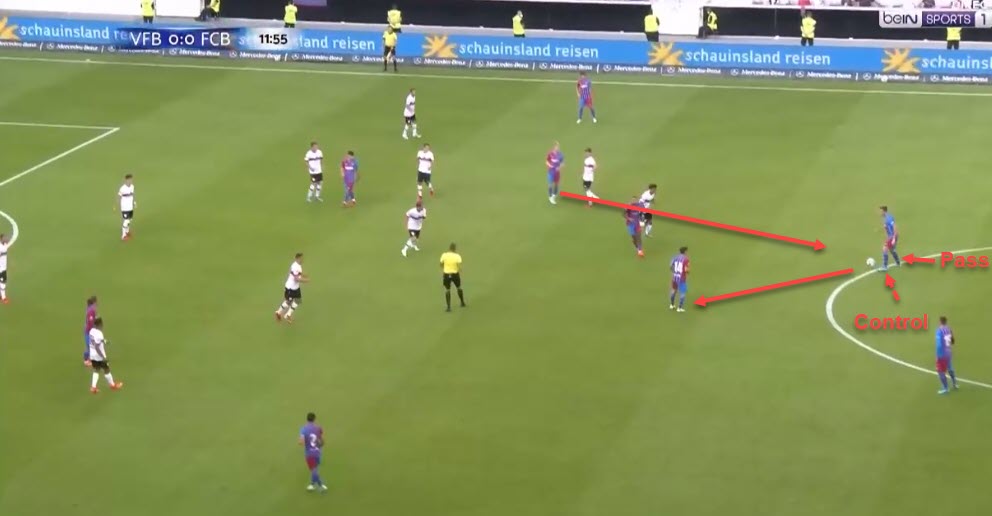 In the image above, we can see this in action. Despite having clear targets close to him, González will take a couple of touches to first control the ball before sending it along to the nearest teammate. This is not to say he’s incapable of performing one-touch passes but sometimes, this can slow down the tempo of the game.

Of course, a crucial part of an elite midfielder’s repertoire is knowing when tempo needs to be increased and when it needs to be decreased. But what’s interesting about Nico is his agility considering his stature. He can twist and turn, almost like Xavi, to beat the press and dribble his way out of his half.

One of the signature moves when receiving the ball, however, is letting it slide across his body and then shielding it until the marker is beaten. Below is a great example of such a move. 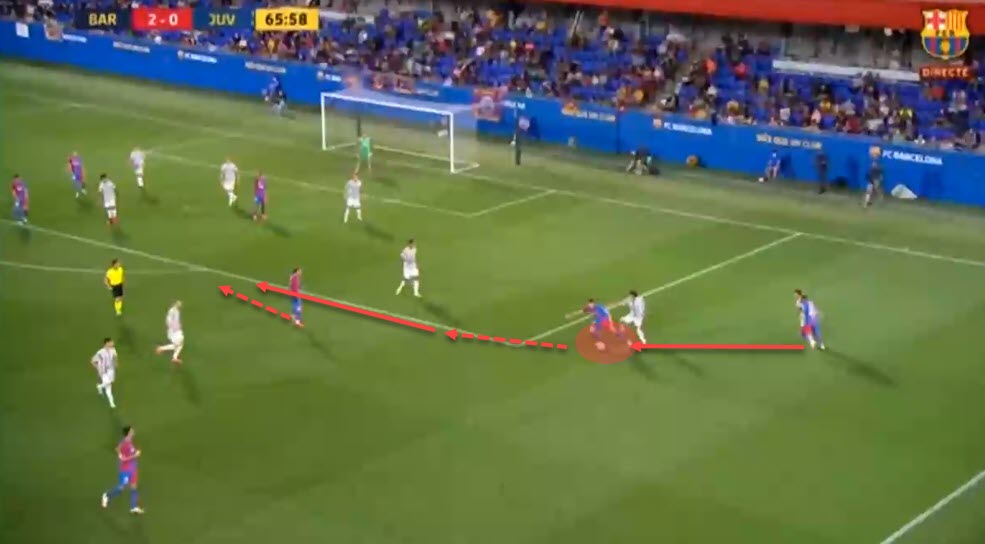 This can also be used for dummy passes to trick the opposition but Nico mostly uses it in this manner to progress past a marker. Finally, when discussing passing and vision, we have to mention his scanning once again. We already dissected in this scout report how he uses scanning to reposition accordingly but he also uses it to find the best possible solution for every situation.

Below, we can see him scan his surroundings for potential targets before receiving the ball and while repositioning at the same time. This is crucial as he knows he’ll receive the pass from the backline and is already getting ready ahead of time.

And then once the ball reaches him, he can immediately pass it forward and break lines. 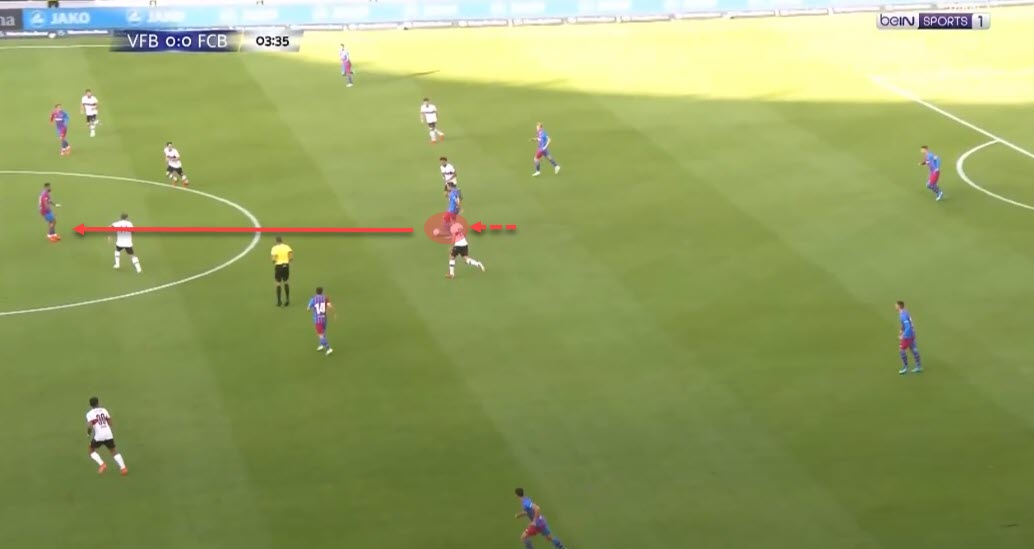 We’ve mentioned how he doesn’t do it often enough but Nico can be a good progressor despite being slightly more conservative in his approach.

In general, González has the biggest chance to succeed if he’s to continue developing as a pivot. With the interior midfielder position being overpopulated at Barcelona, covering a position that’s lacking depth would be huge for both his and the team’s future.

Is he really a Busquets heir? He certainly has the talent to one day become exactly that, albeit with some subtle differences in their respective profiles. But that’s under the condition he develops the progressive part of his skillset and adds a flavour of audacity to his passing.

However, let’s also not forget he’s just 19 years of age and at the very beginning of his career. Jumping to conclusions now already would be falling into a very common trap of modern football.