The Red Bull organization are no strangers to procuring young talent from across the globe, and the jewel in their multi-club crown, RB Leipzig, continued in this vein this summer.

However, rather than bringing talent from more obscure parts of the world, or smaller clubs (often feeder clubs within the Red Bull organization), they bucked the trend, by taking two talents from two of the world’s most notorious producers of talent: Ajax and Barcelona. From the former, they signed Brian Brobbey, a 19-year-old Dutch youth international on a free transfer, and the latter, Ilaix Moriba.

Moriba was a more expensive deal, joining for £14.4 million. Leipzig swooped quickly, with the Catalan giants in need of raising funds, and signed a Spanish youth international in Moriba, who is only 18 himself – and has widely been touted by many as the next Paul Pogba.

Whether he reaches such heights remains to be seen, but it is yet another smart signing from a club who rarely do anything but.

This tactical analysis and scout report will look at what Moriba can bring to Leipzig in this current season and beyond.

Moriba is relatively flexible within the central-midfield position. Last season for Barcelona’s first team he gained minutes as a single and double pivot, as a number eight, and as a number 10. However, the majority of his minutes came in that as a double-pivot or as a double-8. He predominantly played on the left side of the central-midfield unit, given his two-footedness as a player, and this is reflected in the heat map from his 2021/22 Barcelona performances, shown below. We can see much of his actions come in the half-space areas, and that whilst there are patches showing he will get on the ball inside his own half, the vast majority comes in the opposition half. 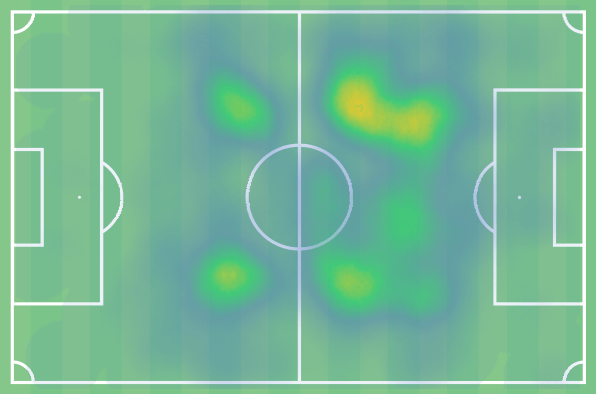 Whilst Moriba is a creative talent, he predominantly influences the game from slightly deeper areas, often anchoring advanced attacks or prolonged periods of possession. If the ball is being worked down the left-flank, then Moriba ensures he is available in the left half-space slightly withdrawn from the bulk of the opposition defence. From this position, he offers an option for his teammates to recycle possession, where he can simply retain possession, or perhaps look for a straight through pass or a switch of play (which we will look into in more detail later on). Regardless of his decision in possession, Moriba scans consistently, often twice before receiving the ball, and decides on his attacking action before getting on the ball. We can see him scanning as he looks to receive in this position in the image below. 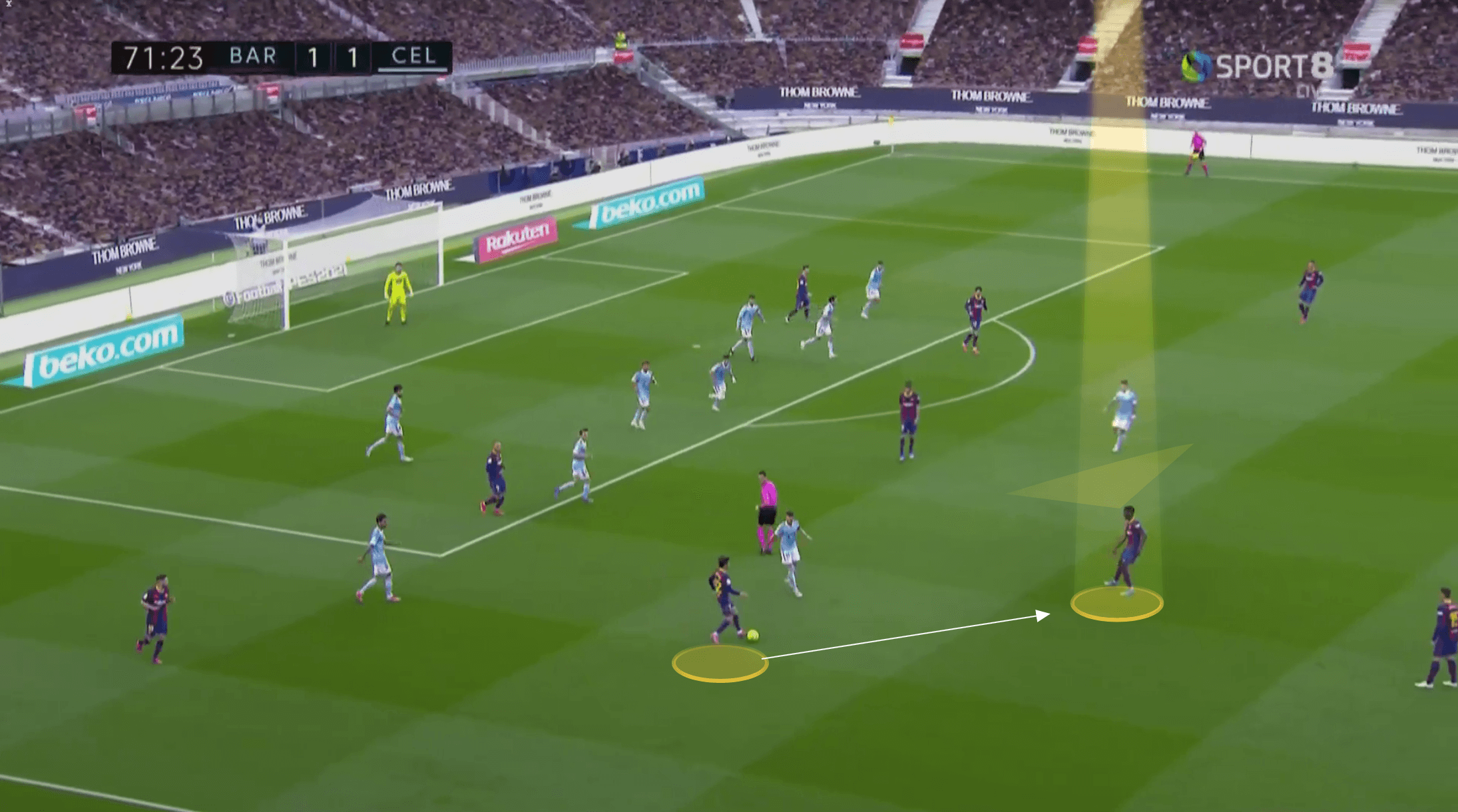 Moriba will allow himself to take on shots from this range if he isn’t pressed, and he generates impressive power on his shots. However, as the shot map shown below, from his performances with Barcelona last season, testifies, he needs to work on his accuracy in general, but particularly from distance. 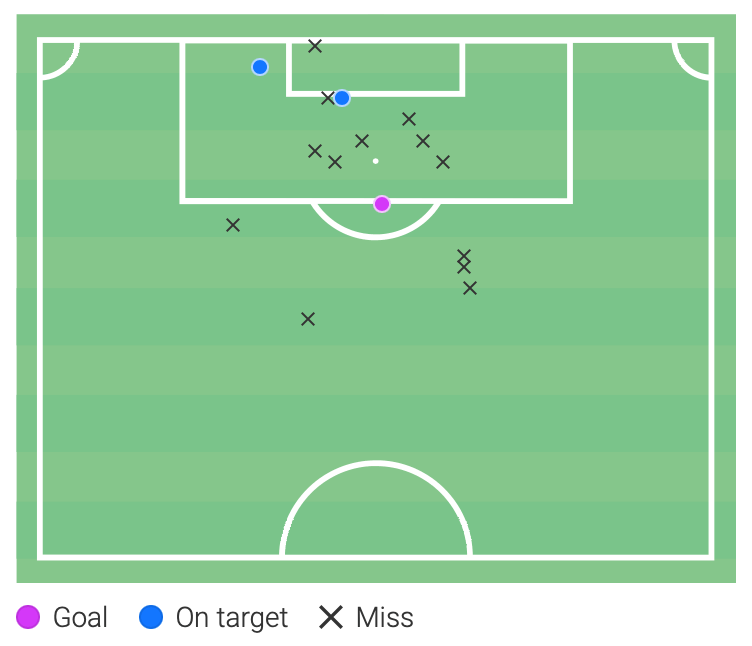 This is how Moriba operates when the ball is in front of him. When the ball is behind him, whether with the deepest midfielder or the backline are simply circling possession, Moriba may well drop deep to get in possession or offer a passing option. He does a terrific job at times of drawing an opponent with him and opening up a forward passing line for a further forward teammate to receive the ball. However, a common tendency of Moriba is to start within the central channel and allow himself to be marked tightly. As the ball is circled wide, he will shift across the pitch too, but gently drift off of the shoulder of his marker and position himself between the lines. We can see him taking this position in the image below. 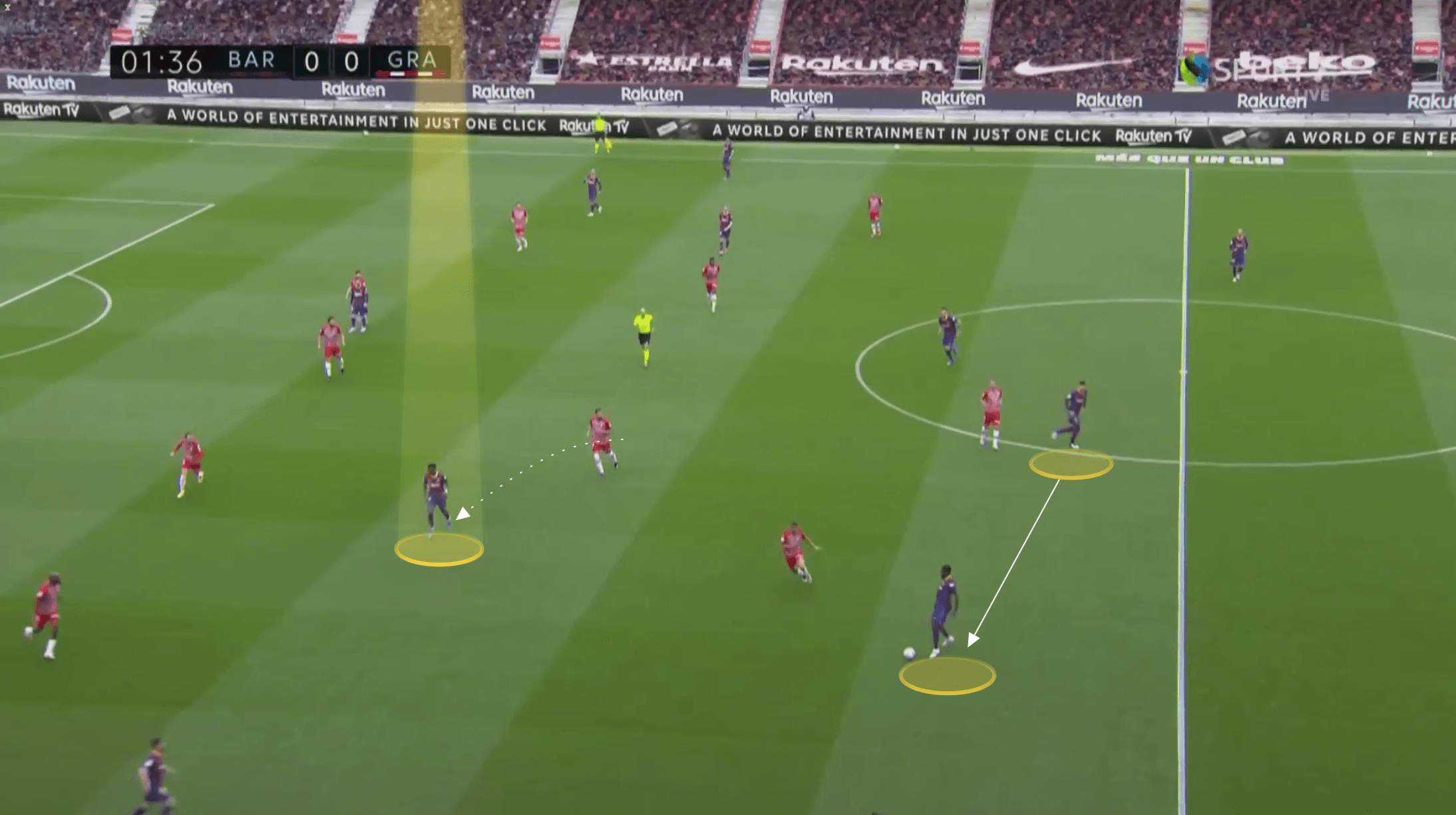 One of Moriba’s standout facets of his game is his passing ability, specifically his ability to progress the ball at a good rate and provide a frequent threat as a creative passer in the final third. His 93.8% completion on his 5.85 passes to the final third per 90 last season would be exceptional for a player at any age, let alone someone so young.

Moriba is noticeably a confident ball player, and he possesses outstanding vision to pick a through pass. He will take on these kinds of passes when the opportunity is clearly there, but he also has a knack for finding them in less obvious circumstances.

Many of these passes will arise from the aforementioned position in the left half-space, as Moriba provides the wide players the option to recycle possession. We can see such an instance occurring in the image shown below. 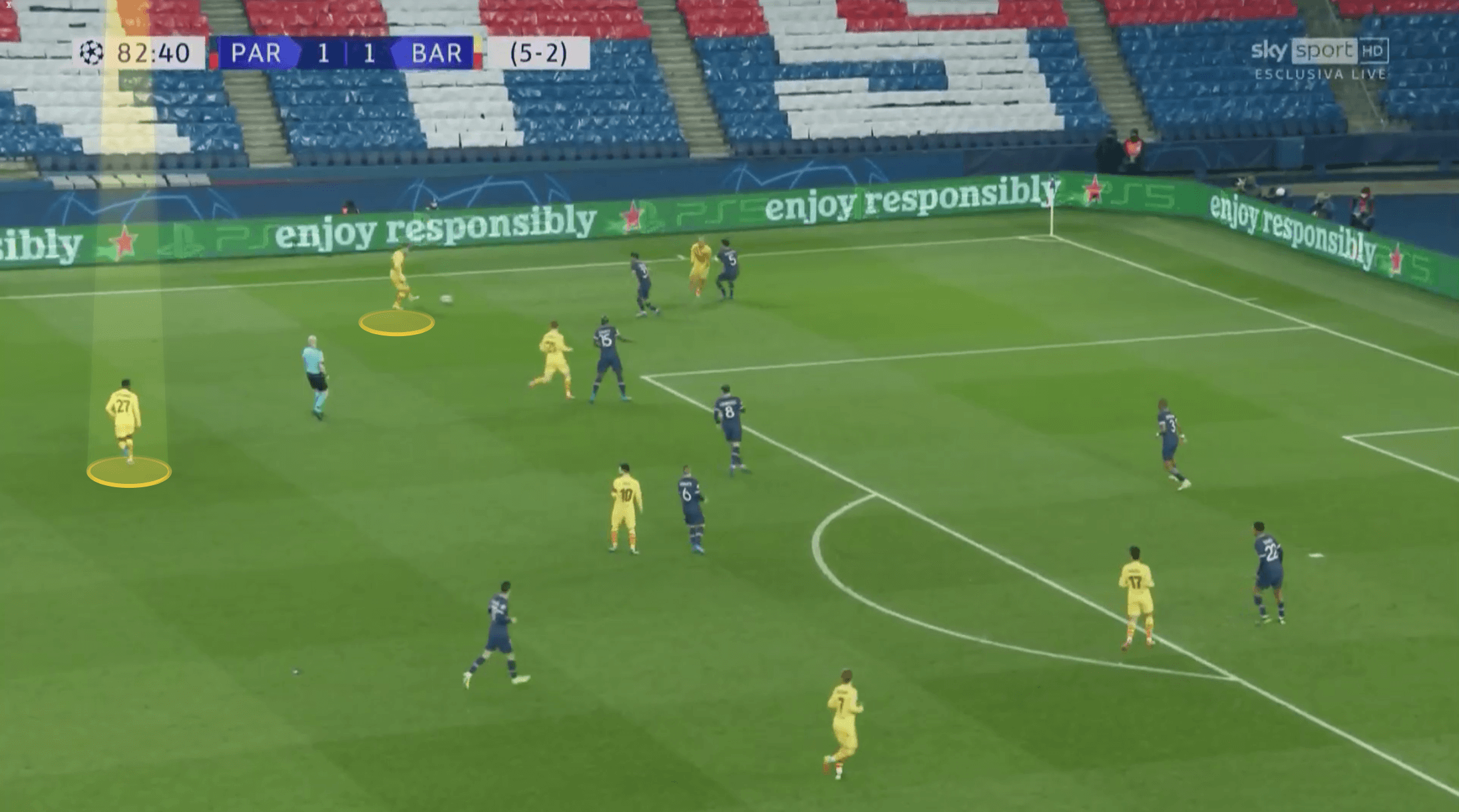 As mentioned before also, Moriba consistently scans before receiving, and it’s the speed at which he can take on these passes which allows him to break through a congested defensive block. By knowing his intended destination before he receives, Moriba can disguise his pass, refraining from looking up or setting himself, and using his body shape to indicate a different pass destination. He generally plays these passes with a good accuracy and at the required weight to ensure they meet their target and aren’t intercepted. 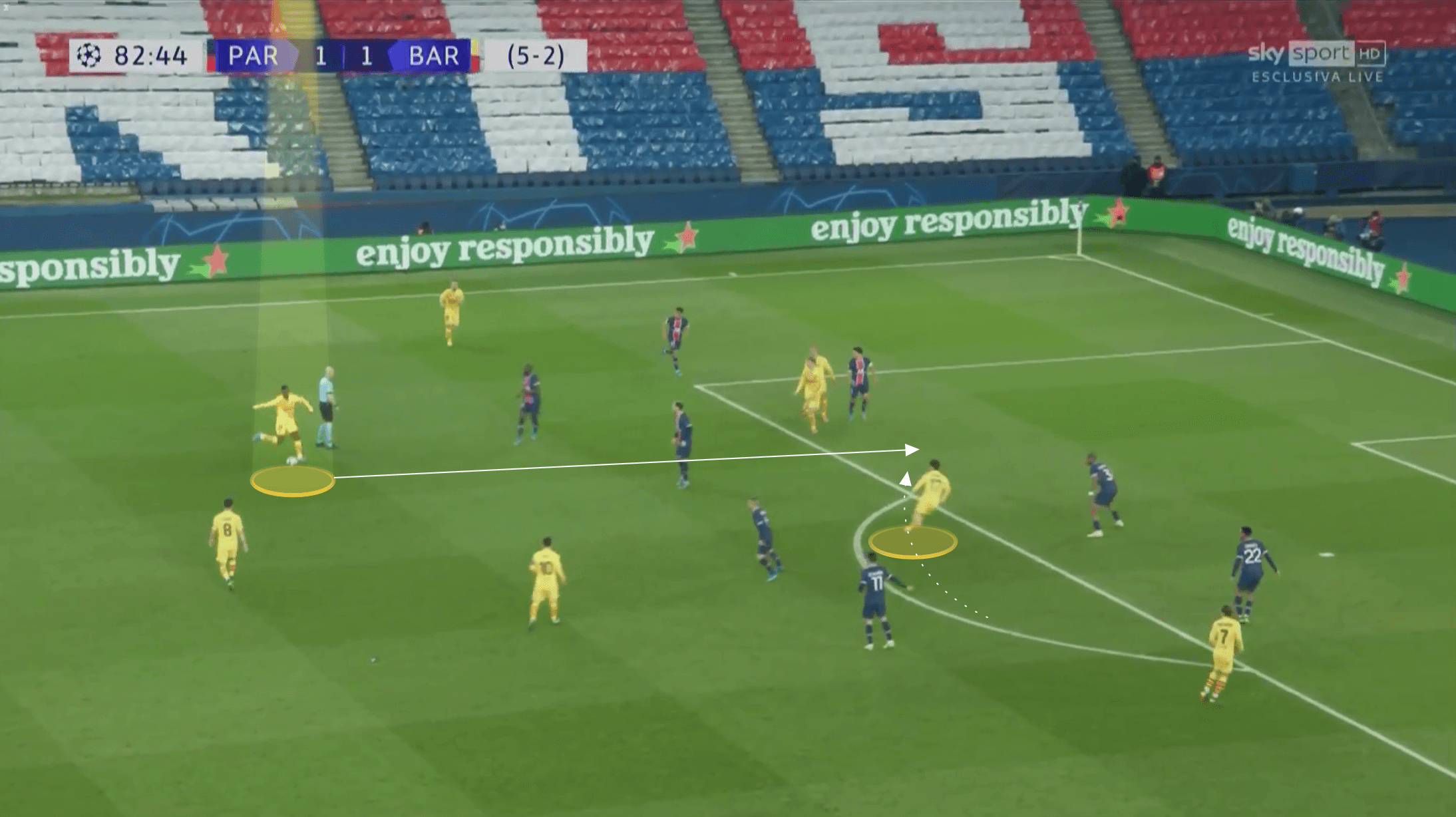 Moriba has shown a talent for picking these passes through the narrowest of gaps.

He recognises the chance to play these passes through anticipating areas of the pitch opening too. Whilst he can play at a good tempo, Moriba also demonstrated a maturity in possession to sit on the ball a little longer and allow the movement ahead of him to open up spaces for these passes. A simple rotation between two players could open up a space in the opposition backline, and not only can Moriba recognise this occurring, but he can also find the gap to exploit it.

He is innovative with his passing too and isn’t just restricted to this type of through pass too. His scanning and overall game-reading allows him to see there is an opening for a split second, and he’s confident enough to attempt a more audacious final ball even if he’s not necessarily successful with it. Moriba may look to cross the ball from wider areas, or float lofted passes towards the back post area, if he believes the opposition defence is vulnerable for a moment. 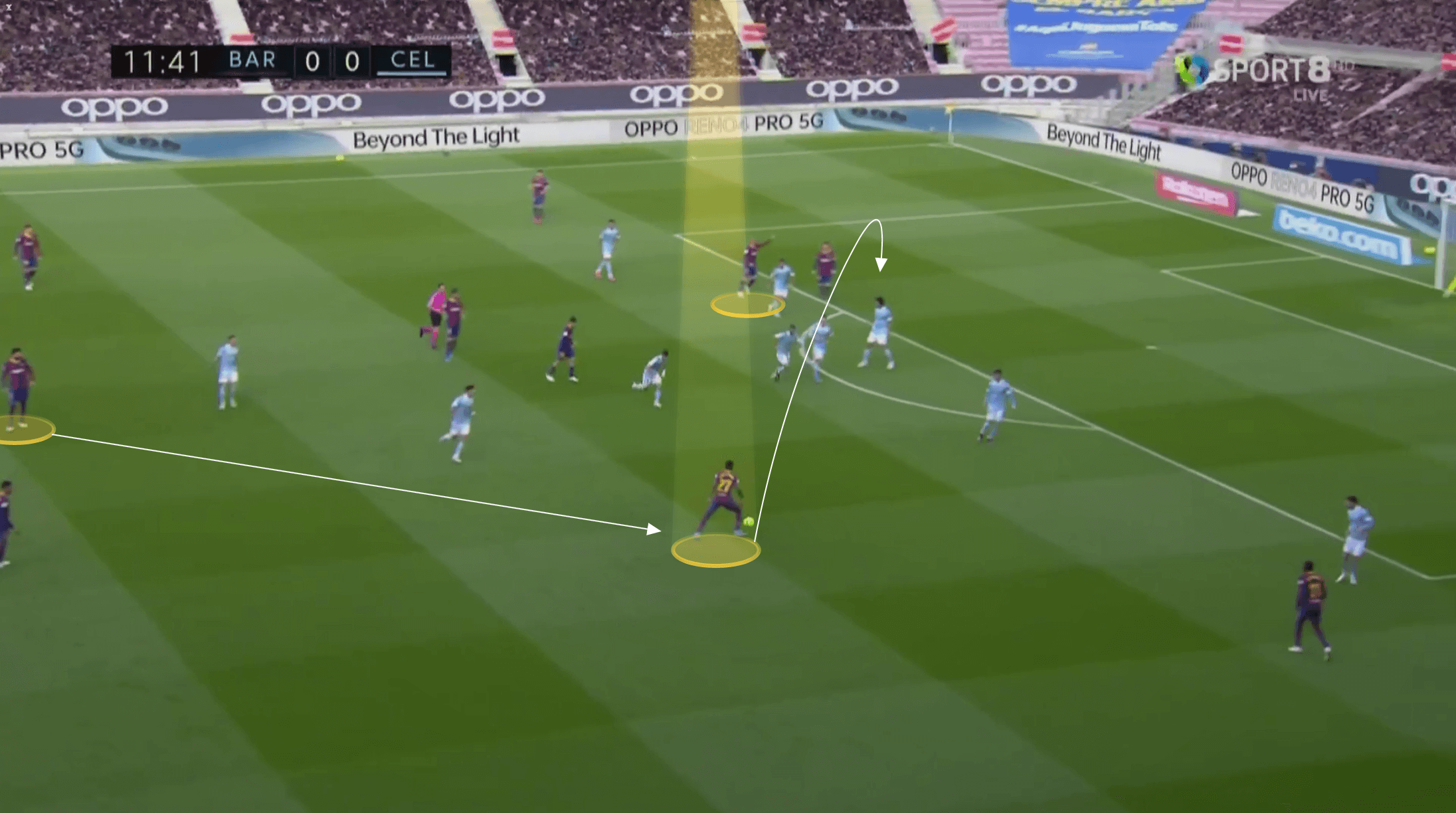 And yet another example of his maturity as a player comes in understanding that there is a moment for this type of pass. He knows that when in possession in a moment where the opposition aren’t expecting a threat on their goal, he can try the more difficult passes. However, in more obvious potentially high-reward attacking moments, he values ensuring the ball is retained.

The image below is a prime example of this where he has possession on a quick break. Whilst many midfielders might have looked to hit the gap between the two defenders as highlighted, Moriba understands that whilst the pass he actually takes on, to the left-winger, is less dangerous in the immediacy, it undoubtedly allows his side to continue the counter. 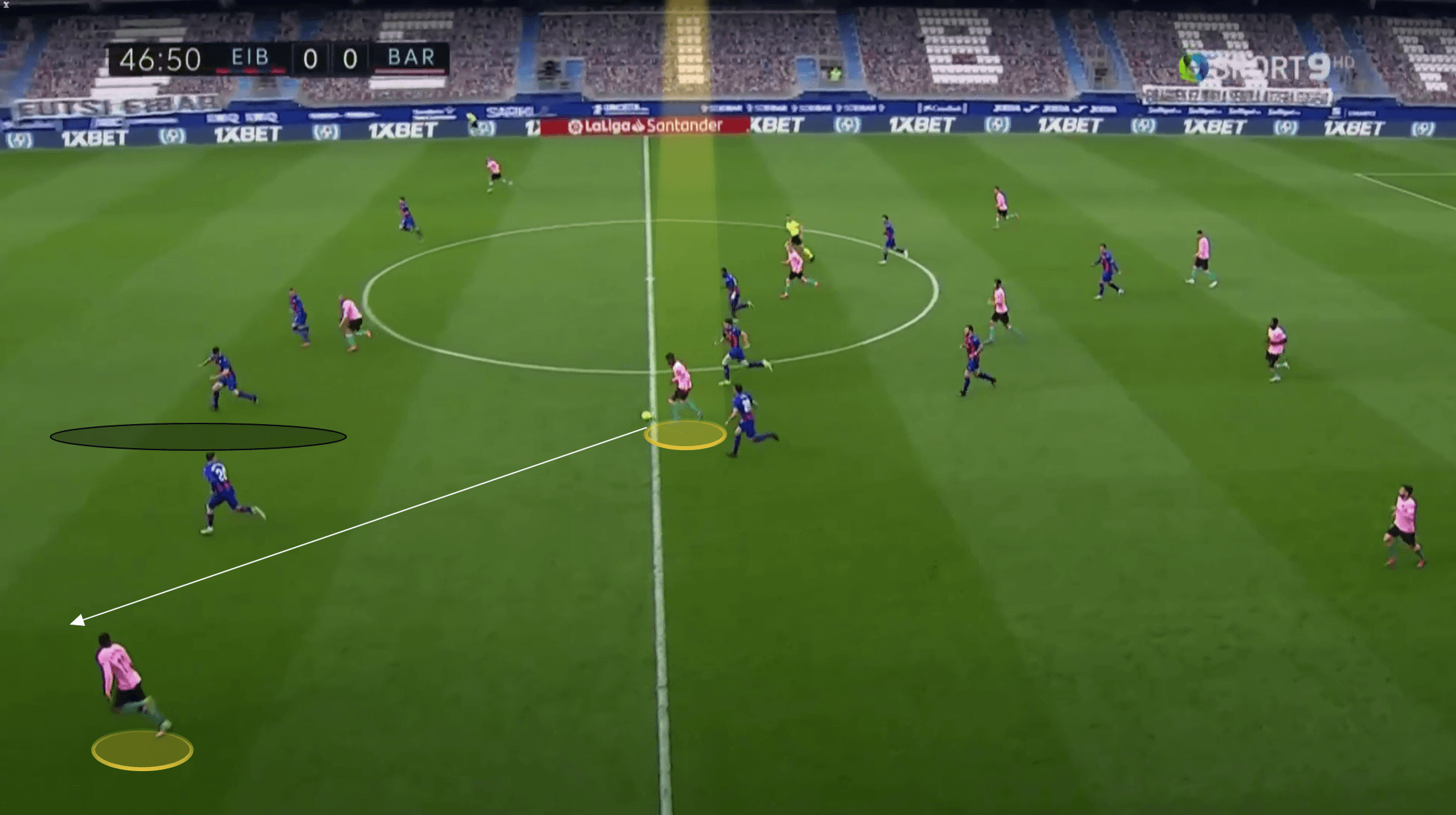 Moriba is an outstanding dribbler. He has a long body, impressive acceleration over short distances, and quality ball control; all of which allow him to dribble effectively. For Barcelona last season he averaged a very respectable 3.41 dribbles per 90, and completed an astonishing 64.3% of these. His dribbles come in different areas of the pitch, but whilst he can take a player on in a conventional 1v1 setting, he is at his best when operating in tight areas.

Moriba has the ability to change direction quickly, and cut the ball at a sharp angle before driving away from the opponent. Along with his overall awareness of space and oncoming pressure, this makes him a very press-resistant midfielder. As such Moriba is a useful player to have in build-up against a side with a high press, and whilst he doesn’t constantly attempt dribbles on the edge of his own box, he is confident enough to beat a player if pressed in this area. 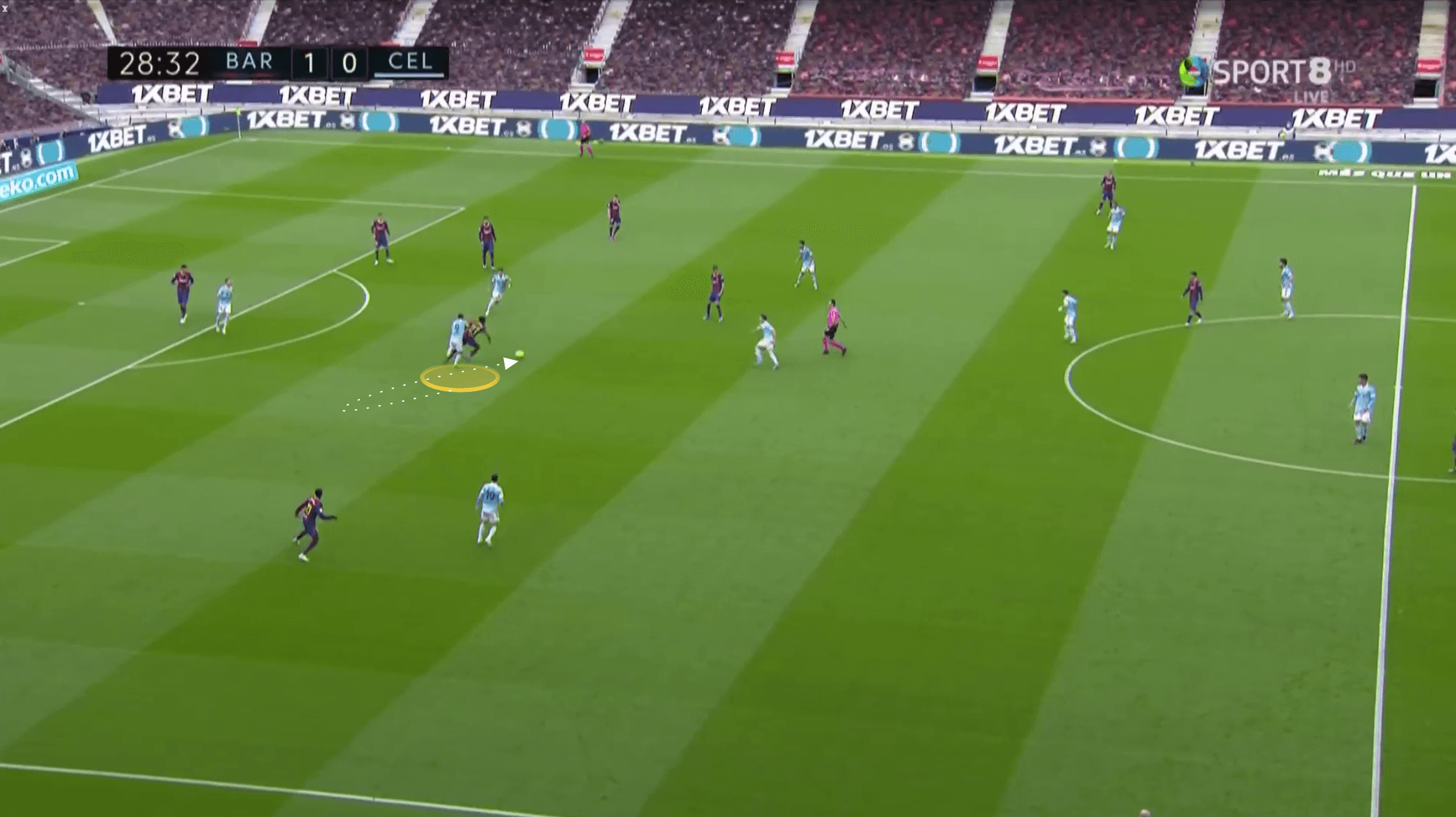 When looking to receive under pressure, Moriba will engage the press of the opponent by receiving with a slightly flat body position. This position is oft a pressing trigger for defenders, but in the case of receiving in a congested area, it allows him to see the pressure coming from either side of him. 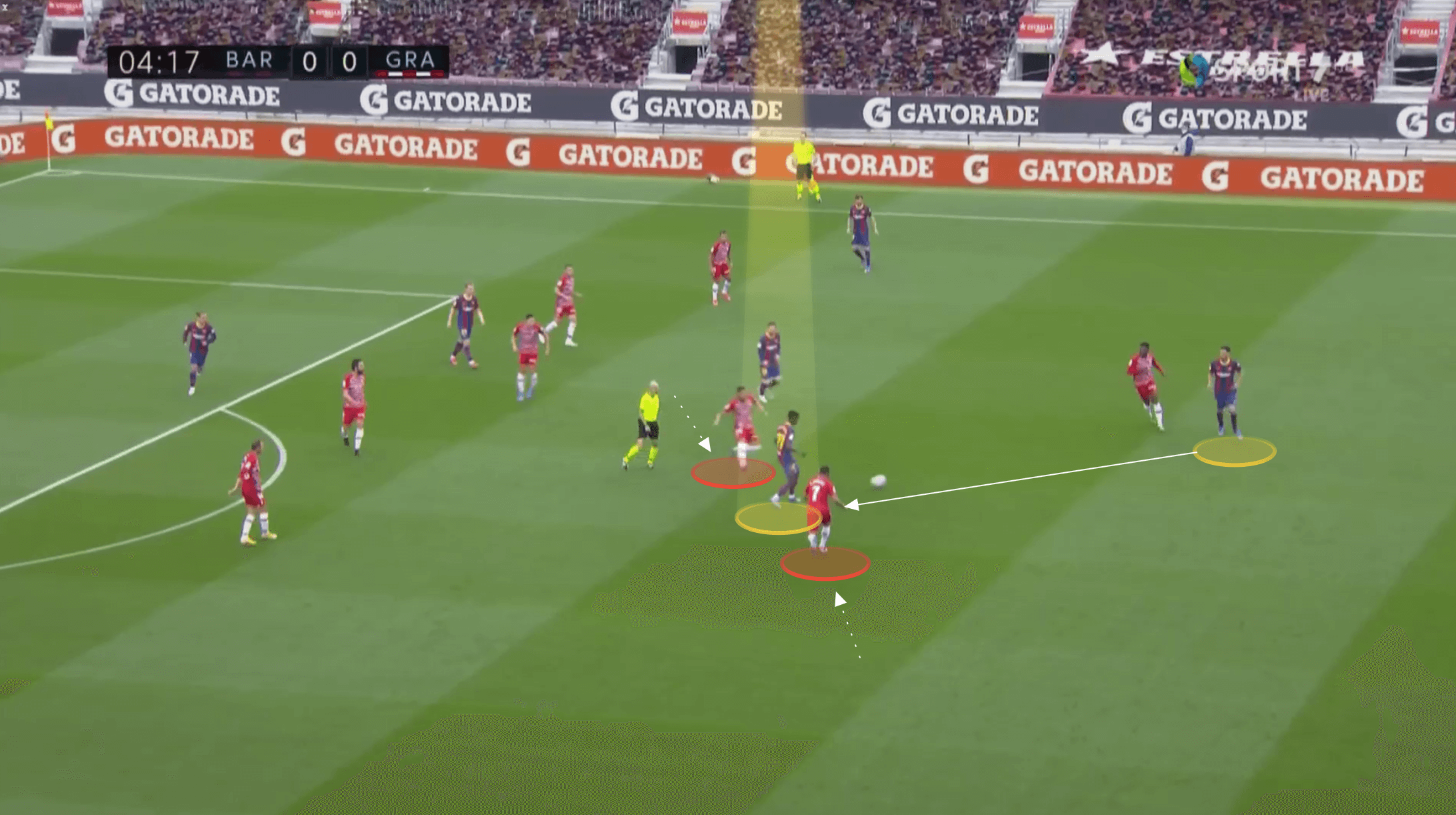 At the last moment, Moriba will judge which defender is closest to him and he will make the late adjustment to receive on the half-turn and use his body to shield the ball from the closest opponent. In this moment he may let the ball run past him and drop his shoulder to give himself enough space to exit this duel, or he will take a touch and draw the tackle attempt from the other defender, before again exiting the duel. He has a knack for engaging the press of these players in these kinds of areas before still being able to exit towards goal. We can see this occurring in the image below as he wins a foul against Granada. 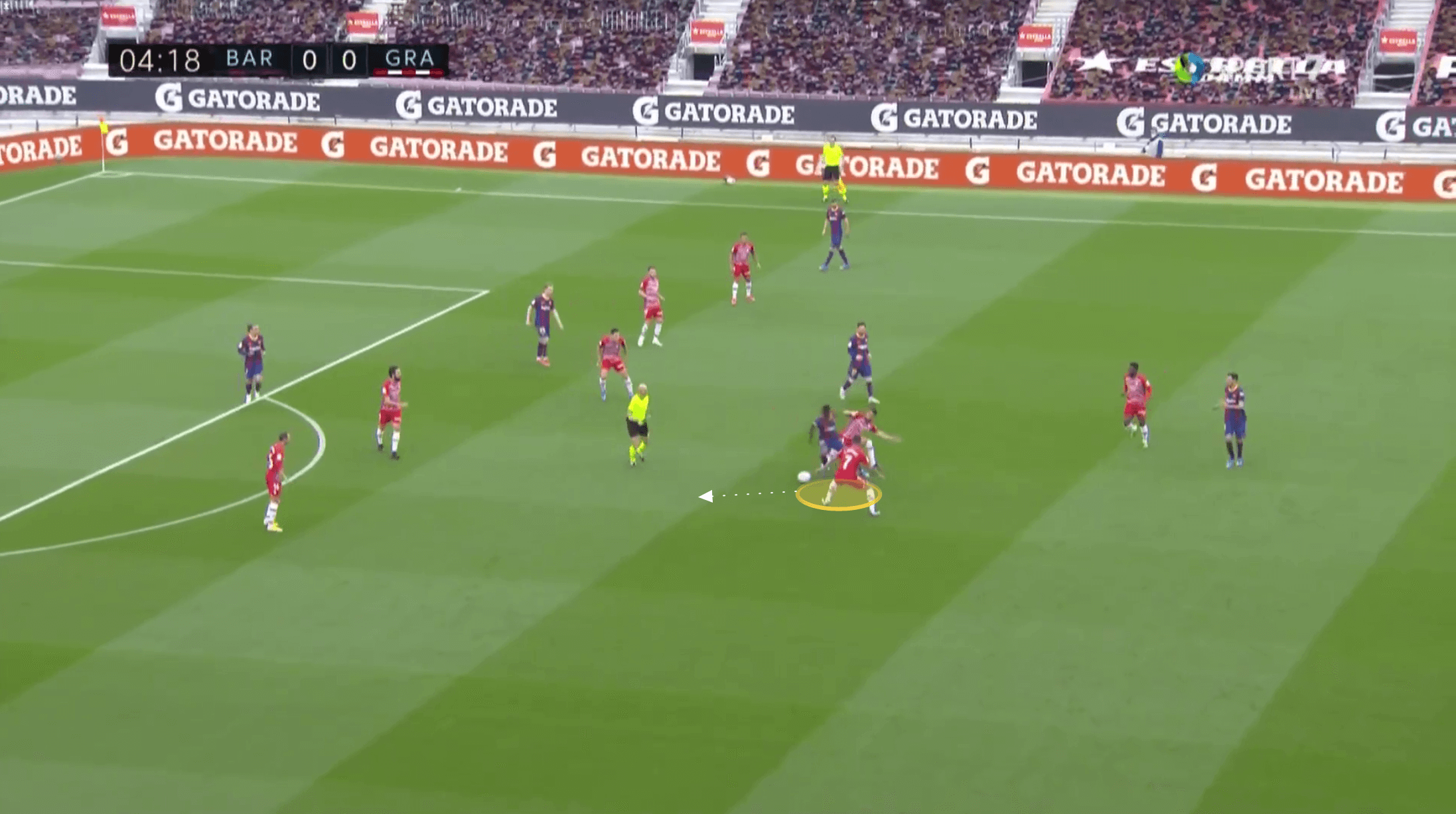 A similar pattern can once again be seen in the image below, but this time against Celta Vigo. once more he receives with that flat body position and he draws the attention of two defenders either side of him. 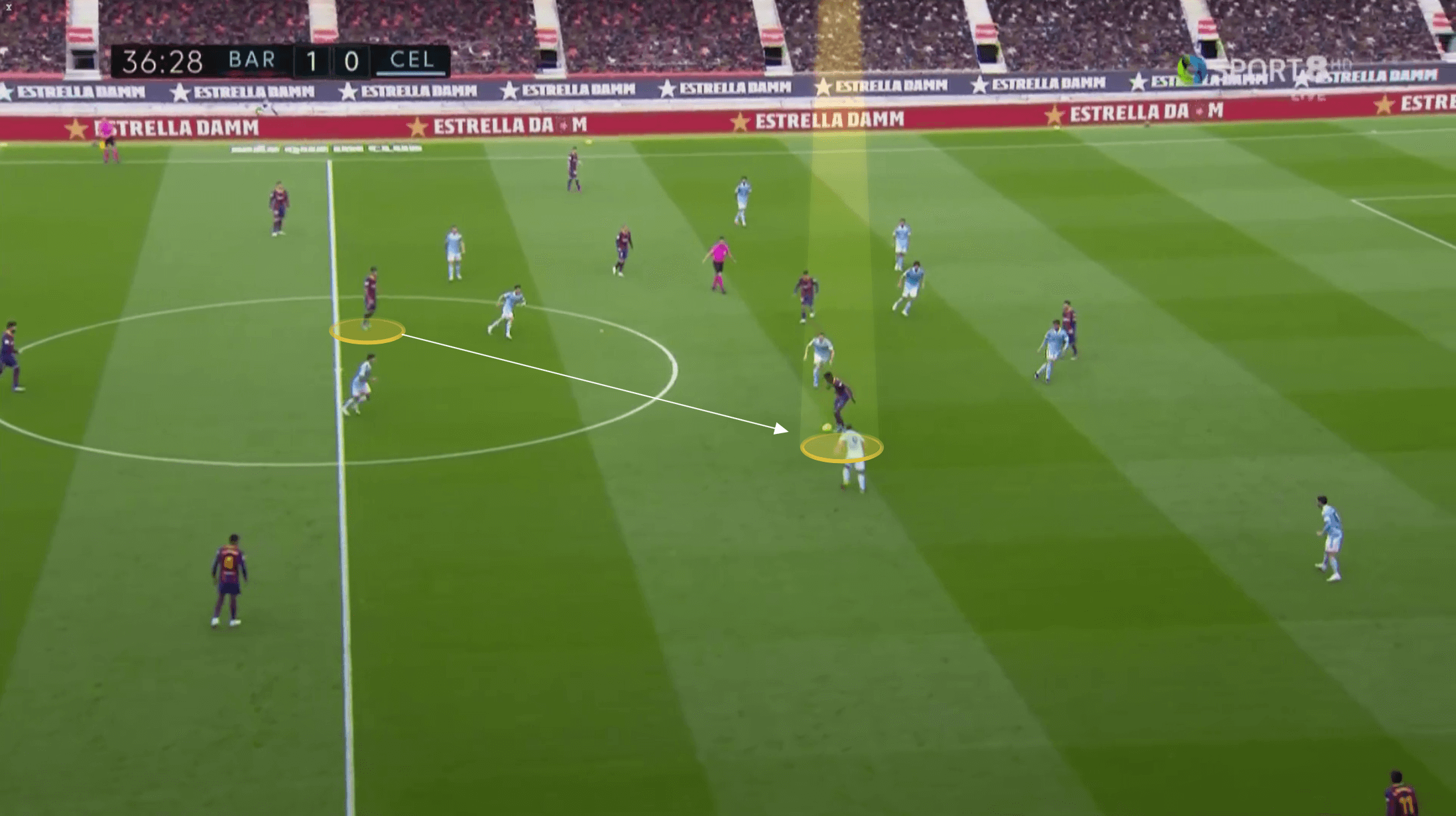 He exits the area, once more shielding the ball as he does so. However, in the image below we can see how he uses his long frame to shield possession, ensuring his left leg, which is closest to the pressure of the defender, fully extends between the path of the defender and the ball. He protects the ball whilst still moving forward, and if the defender is impatient he will draw contact as he does so. 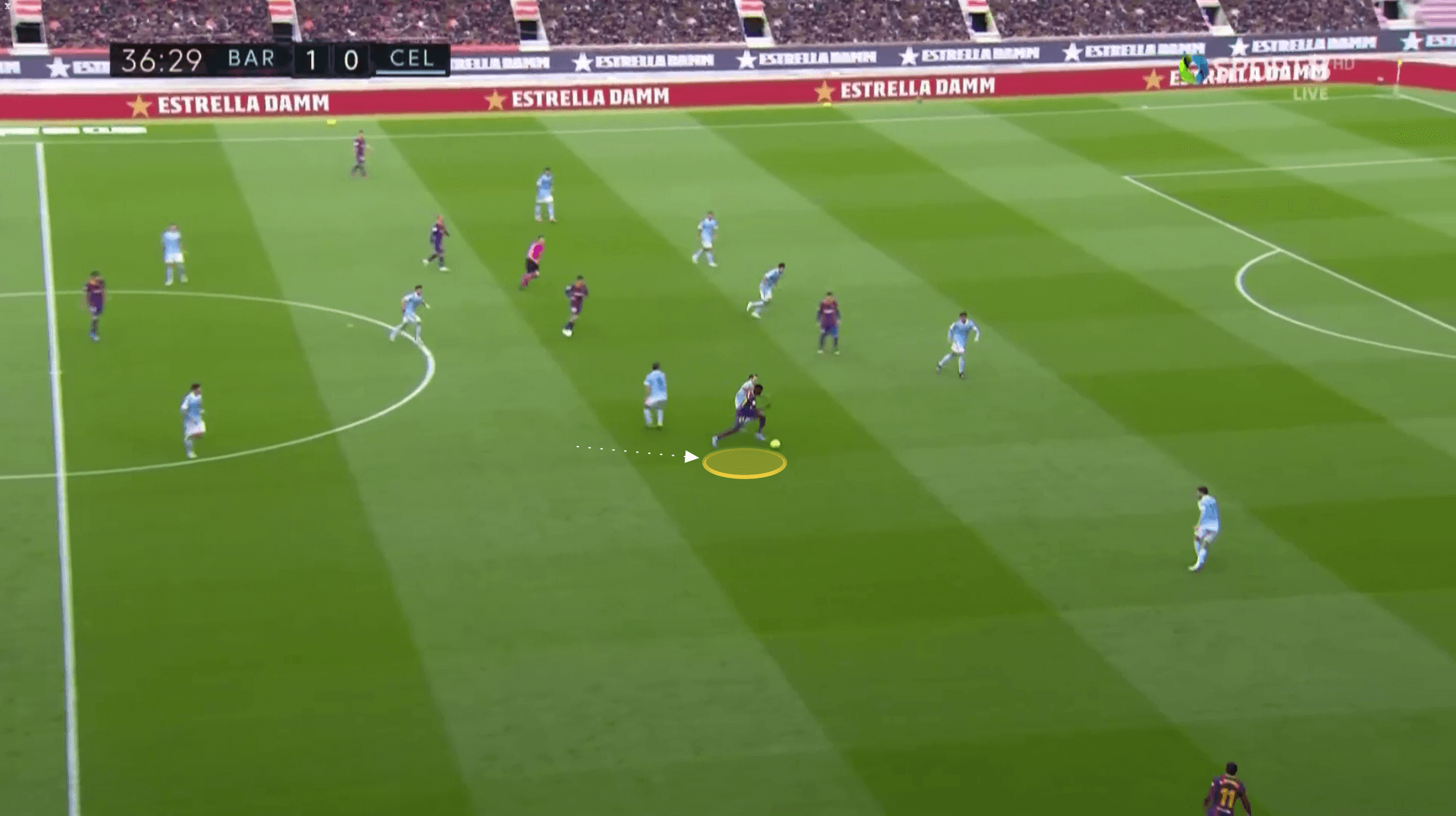 Moriba is yet to feature for Leipzig, but whilst he is a player of immense talent, he isn’t necessarily someone you would associate with an intense, pressing side like Leipzig. Nevertheless, it will be interesting to monitor his development there this season. With Marcel Sabitzer departing for Bayern Munich it of course leaves a big hole in their midfield, but Moriba is a different kind of player and he won’t have been brought in to fill that need. He comprises a part of an up and coming young group of players at Leipzig, along with the aforementioned Brobbey, who will be slowly brought into the starting XI of Leipzig but will undoubtedly have a large role to play in shaping any future success for the Bundesliga side.