The art form of a winger has often been lost in the recent decade of Spanish international football. Do not think of me naïve to the attacking might which brought so much success between 2008 and 2012. The fruits born of offensive movement and passing majesty were those not of rigid wing-play but of free-flowing attacking midfielders interchanging passes as if connected telepathically. Mikel Oyarzabal, a 21-year-old Basque-born winger, looks to break that mould with a collection of his compatriots.

Born in the municipality of Eibar in the Basque region of Spain, Oyarzabal was swallowed up by the Real Socieded youth academy at the age of 14. A fast development led prodigy to earn a call up to the B side in 2014. Scoring his first goal less than a year later during the opening rounds of the 2015/16 season, Oyarzabal earned his first appearance in the senior squad by October. He has not looked back since.

La Real had realised the talent which had been buried in their youth team. He signed a new deal just six days after his senior debut until 2021 and extended it for a further year at the end of the season.

Oyarzabal has represented the Spanish national team from the under-18 setup right through to the senior side. He made his full debut at 19 years of age in a friendly against Bosnia & Herzegovina.

Oyarzabal does fall into the category of many modern wide Spanish wingers. He is not blessed with rapid speed, but with ferocious agility which he uses to disorientate defenders to take them on and inevitably beat them. La Real’s number 10 has used these traits to be an extremely versatile attacker. Whilst strongly left-footed, the Spaniard is comfortable playing on either side of the field. 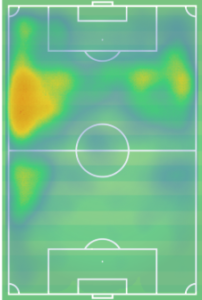 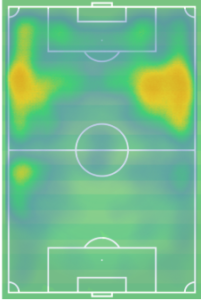 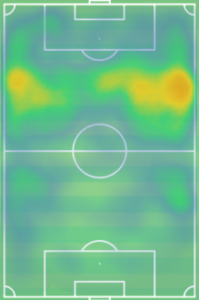 The above heat maps show Oyarzabal’s evolution in the last three seasons positionally. Heavily featuring on the left wing during the 2016/17 season, building on from his break out the year before, Oyarzabal made the position his own. The characteristics of La Real’s attacking stereotype were compounded by the runs made by the Spaniard. The left flank combination of Yuri Berchiche, who would leave Sociedad the following season for Paris Saint-Germain, and Oyarzabal ripped through opposing teams. 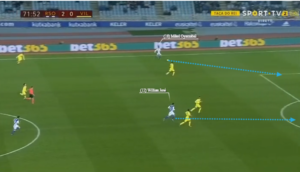 Manager Eusebio Sacristan had created an issue by default of his own tactical decision to create such a deadly left-sided partnership. La Real became predictable: neutralise their left-hand side, and their effectiveness on the attack would be mitigated.

Eusebio realised this. He therefore made the decision in his final season to make Oyarzabal’s positioning more fluid, allowing the then 19-year-old to alternate flanks. Allowing him more freedom to roam had an astounding effect on the youngster’s goal output. 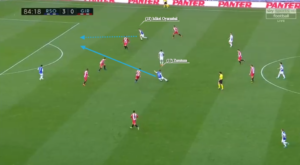 Real Sociedad vs Girona 8/4/2018. Oyarzabal’s right-wing play opening space for him to attempt a finish. He opens up his body with finesse with his left foot leading to a goal.

A solitary two goals the season prior had increased six-fold. Twelve goals in La Liga with an additional two in Europe, and suddenly the tricky winger was increasing the size of font for his name in many a Basque newspaper.

Although the success under Eusebio for Oyarzabal was exponential, defensively La Real were costly, so much so that it cost the man his job. For the remainder of the season under Imanol Alguacil, Oyarzabal did not start a single match on the right, but those lessons from Eusebio did not vanish like his teacher on his departure. A further five goals rounded off the season with Sociedad safe to fight another year.

The 2018/19 season has seen Oyarzabal continue his development and continue scoring goals. He has managed five so far in the league after 18 matches in what is another rollercoaster season for La Real. However, his lack of appearances on the right has continued into the new season with only two showings on the alternate wing. 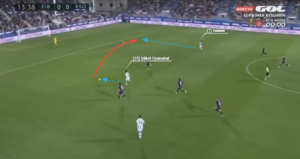 Oyarzabal’s left-wing role in 2018/19 has led him to playing dangerous balls across opposition defences for either Juanmi or Willian Jose to take advantage of.

The lack of variety in this year’s positioning for Oyarzabal has not hindered his development. After a tricky start for La Real with Oyarzabal becoming the club’s talismanic figure they are dragging themselves back into the top half with European intentions in their sights.

Whilst what Oyarzabal does in attack is sublime at such a young age, to be a complete player on either flank tireless effort must be made in both directions. Oyarzabal is improving defensively season upon season.

It is well documented that the young Spaniard is not blessed with great pace but his ability to cover ground up and down the pitch is exceptional. The closing down of opponents to force mistakes is a well-ingrained characteristic of Oyarzabal’s game. Whilst not always successful, simply the application on the field is making a significant impact on the rate La Real can recover the ball. 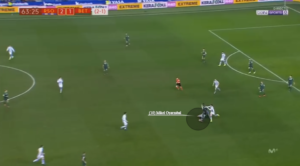 Not apprehensive about making lunging tackles to recover possession, Oyarzabal’s accuracy in these situations isn’t that of seasoned veterans of the back line. It is certainly effective enough to provide La Real with additional bite covering their forward-thinking full-backs, however. 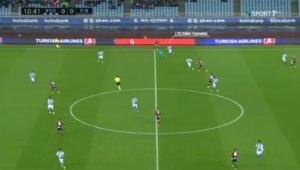 As you can see from the graphic below, Oyarzabal has averaged over 20 attempted duels in La Liga games across his career so far. With over a 30% success rate for a forward-thinking player, this is clearly a useful asset to La Real in their search to regain possession.

Passing highlights both Oyarzabal’s key strengths and weaknesses. Beginning with what makes the Spaniard such a technical forward-thinking player, his interplay and ambitious short passing has caught the eye.

Whether it’s short one-two plays with La Real’s Brazilian forward William Jose or an arching low-driven ball to feed an incisive run through opposition defences, Oyarzabal has the talent and ability to find these opportunities expertly. 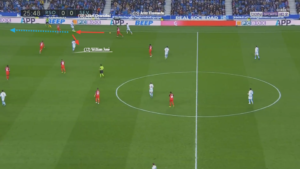 In the above image this move displays perfectly the Spaniard’s passing and movement in complete synchronicity. As soon as the pass is made to William Jose, Oyarzabal makes the run beyond Sevilla’s left full-back to receive the immediate return through-ball. 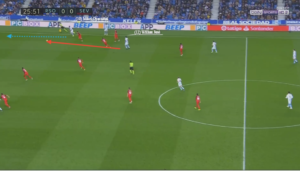 The move is executed without a hitch and La Real are in an attacking position to hurt the opposition. This move has become a trademark part of the Basque side’s offensive arsenal.

The weakness in Oyarzabal’s game does not fall into his deft technical game but more the traditional style of forward wing play. Watching La Real you notice that both forwards, Willian Jose and Juanmi, are both rather industrial attackers with a good eye for goal using their heads.

To utilise this asset, lofted balls into the box are necessary to harness their potential goal threat. This is the area which Oyarzabal does fall down on. Season upon season the hope has been for the Spaniard to improve the accuracy and delivering of his crosses. This has been a stumbling block of his development.

Since his first full season, Oyarzabal has averaged fewer attempted crosses. In 2016/17 he averaged 2.72 crosses, but by the following season this had dropped to 1.88. Currently the Basque winger is attempting just 1.48 crosses per game. Oyarzabal is aware of this weakness. A cross completion rate of 26% is the statistical evidence for his reluctance to attempt these moves.

Even with this glaring issue for a wide player, what is clear is how much Real Sociedad value their pocket-sized attacker. The opportunity arose for him to move to Basque giants and La Real’s bitter rivals Athletic Bilbao after the latter had been saturated with income after the sales of Kepa Arrizabalaga and Aymeric Laporte to Chelsea and Manchester City respectively. However, Oyarzabal instead committed his future to La Real and signed a contract extension until 2023.

La Real are breaking into the top half of La Liga, while another season in Europe is becoming a more achievable goal as they recover from their poor start to the season. Oyarzabal is surely going to be the key cog in the machine of the blue and white half of the Basque region.