Croatia under-19 captain Ante Palaversa has been rumoured to be joining Manchester City in the near future for a fee of £7 million. The young Croatian defensive midfielder has broken into Hajduk Split’s first team this season, making 14 appearances in Croatia’s First Division and becoming a mainstay of the side.

Manchester City have made no secret about the fact that they have been looking far and wide for a Fernandinho replacement. If the Premier League Champions are able to bring in Palaversa this could be a long-term solution to the Fernandinho problem. In our tactical analysis we will look at some of the statistics behind Ante Palaversa and how he compares to Fernandinho. We will also highlight some of his strengths that he has so far displayed in Croatia.

Palaversa is a very physical player for his age. At 18 he is roughly 6″2′, and doesn’t look at all out of place amongst his older teammates at Hajduk Split. Hajduk have played a number of systems so far this season but more often than not they have opted for a 4-1-2-1-2 diamond. In this system Palaversa is usually selected as the left or right-sided midfielder rather than in the single pivot, the position taken up by Fernandinho in Manchester City’s lineup.

At the half-way point in the Croatian footballing season, Hajduk Split are under-performing in comparison to last year’s third-place finish. They currently sit fifth in the league, so although Ante Palaversa has broken into the team it is currently a team that is flattering to deceive.

Palaversa has an impressive range to his passing and has shown an ability to play the ball between the lines on the ground. He also an ability to switch the ball into space or to a teammate in an advanced position, something which is an important aspect of Manchester City’s style of play. Below are a number of examples that show Palaversa’s range of passing and ability to spot space and movement ahead of him. 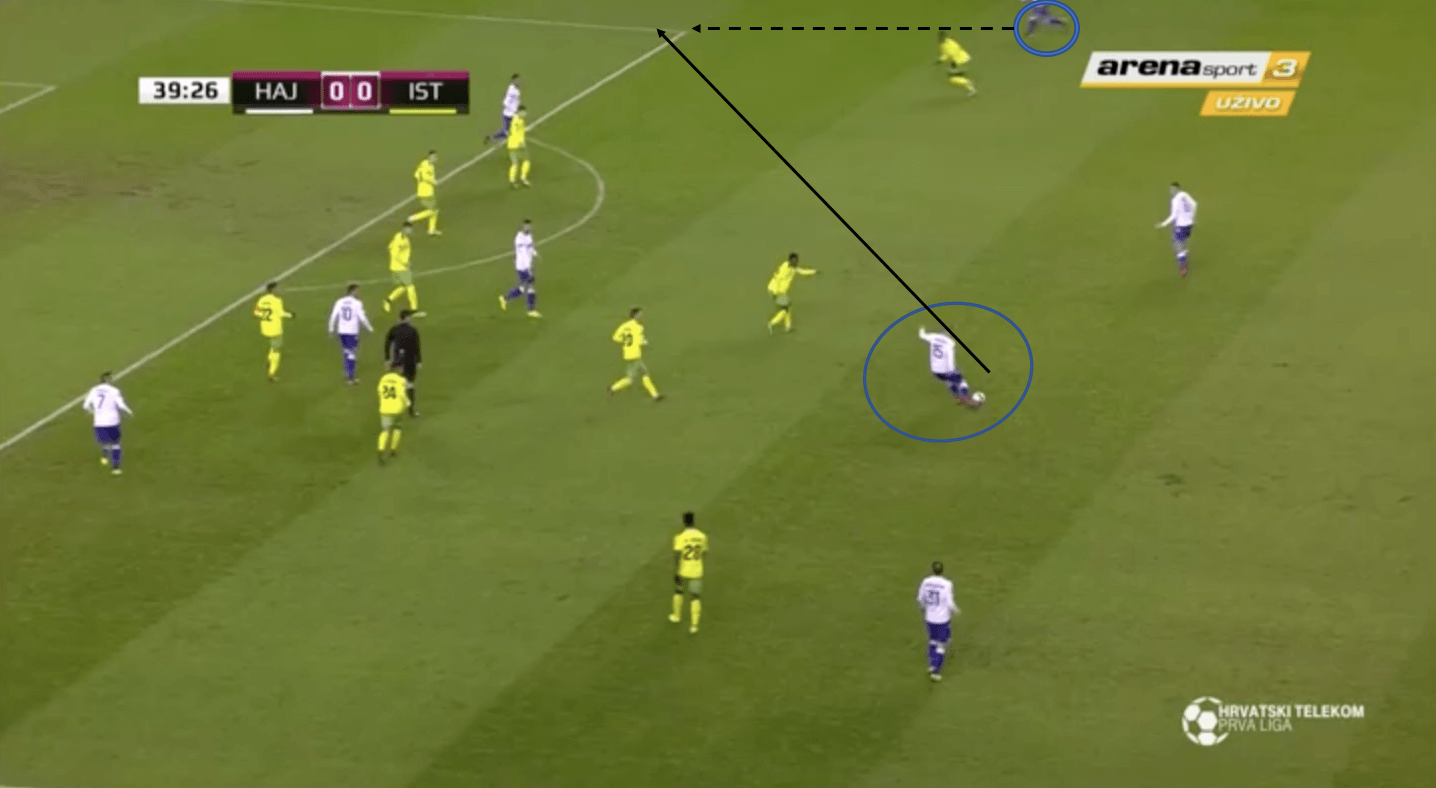 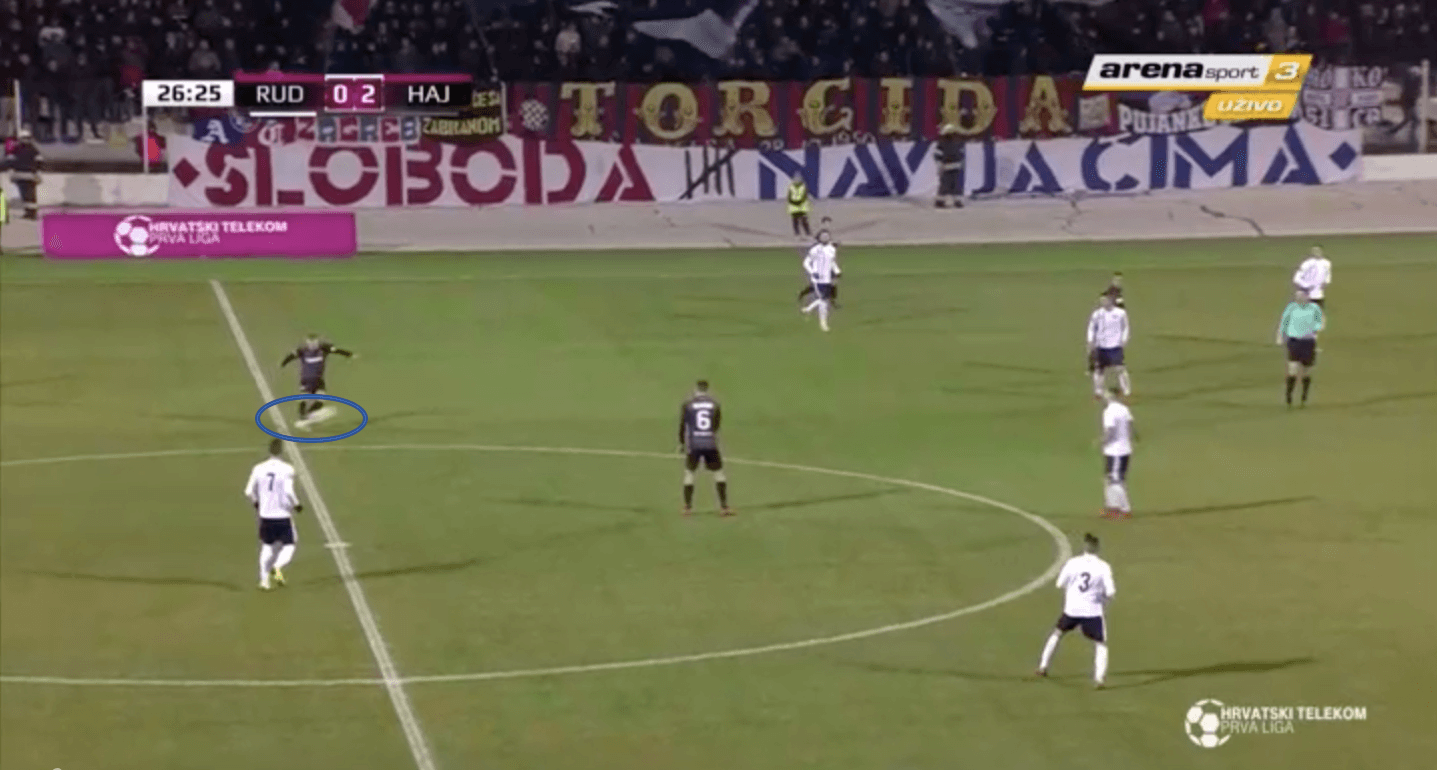 Palaversa spots his receiver (below) and is able to put the ball directly onto his toe. This is very reminiscent of the type of pass Aymeric Laporte is tasked with playing for Manchester City. 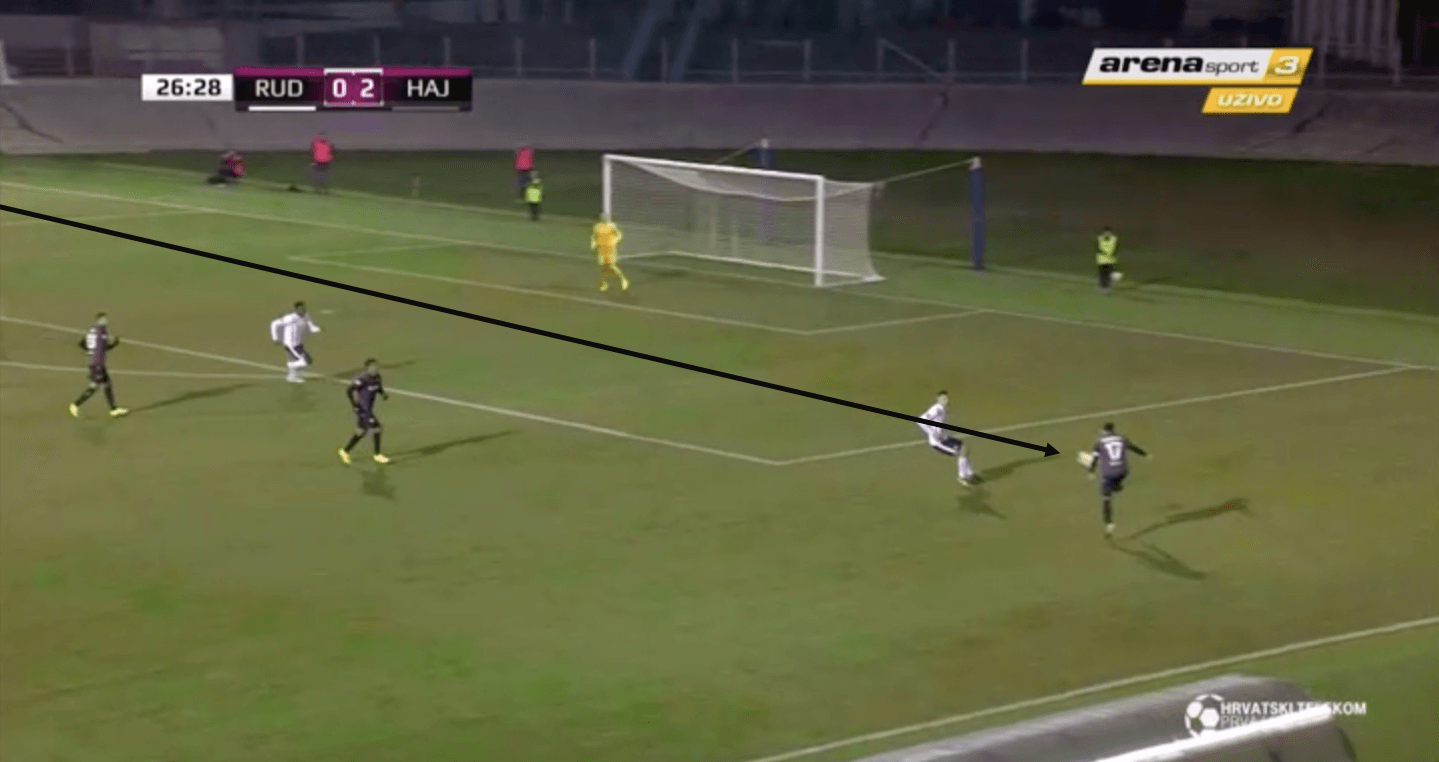 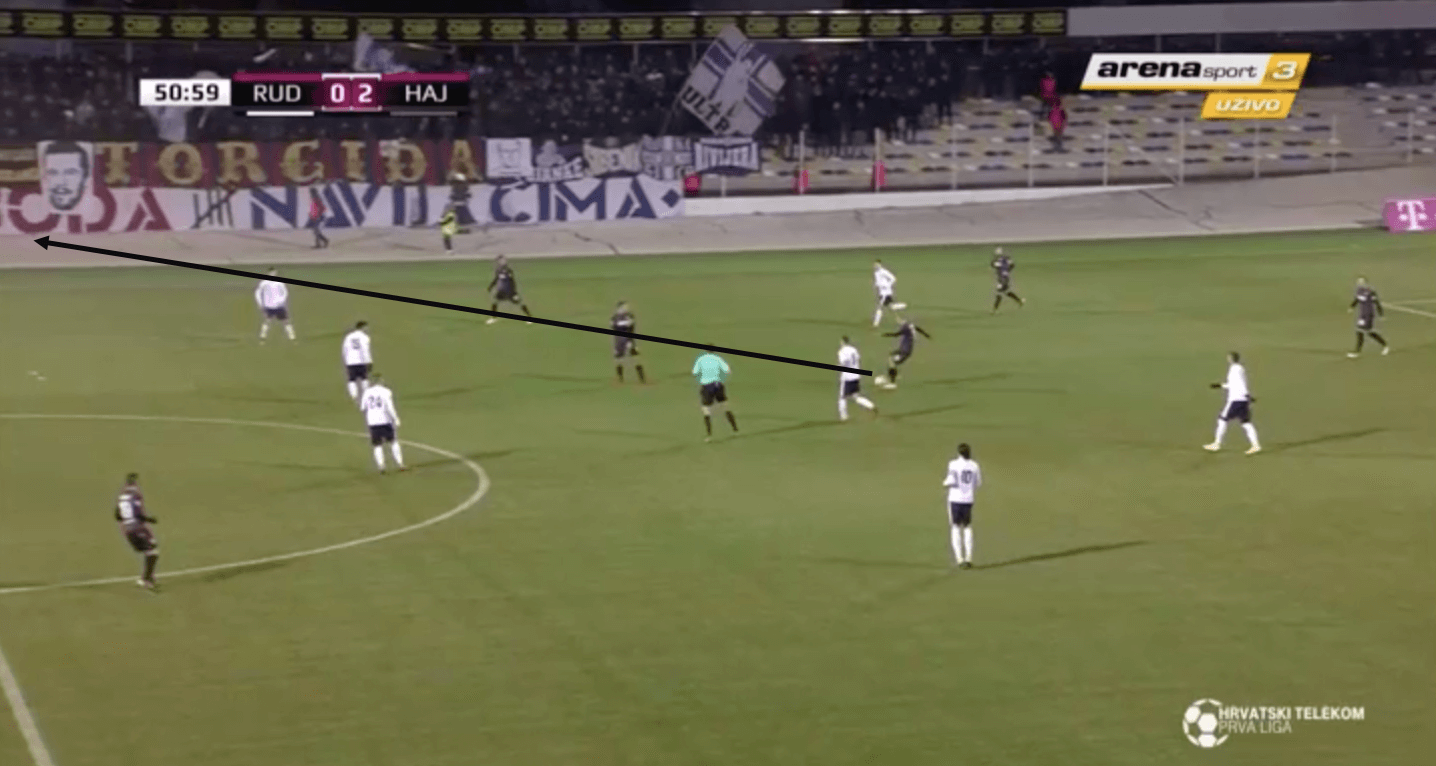 The tall midfielder again spots a teammate in acres of space. This time he drills the ball with the outside of his boot to find the winger early with space ahead of him. 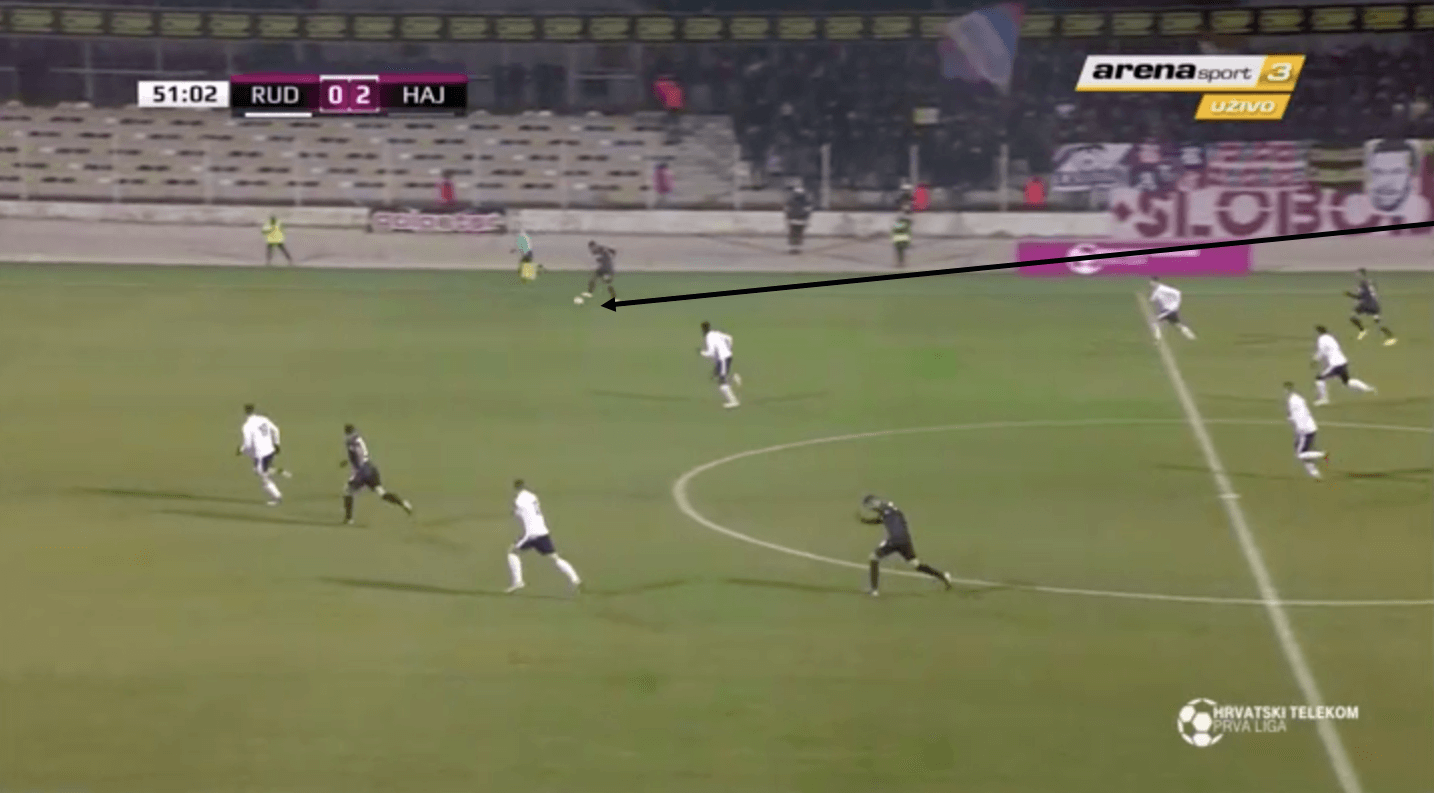 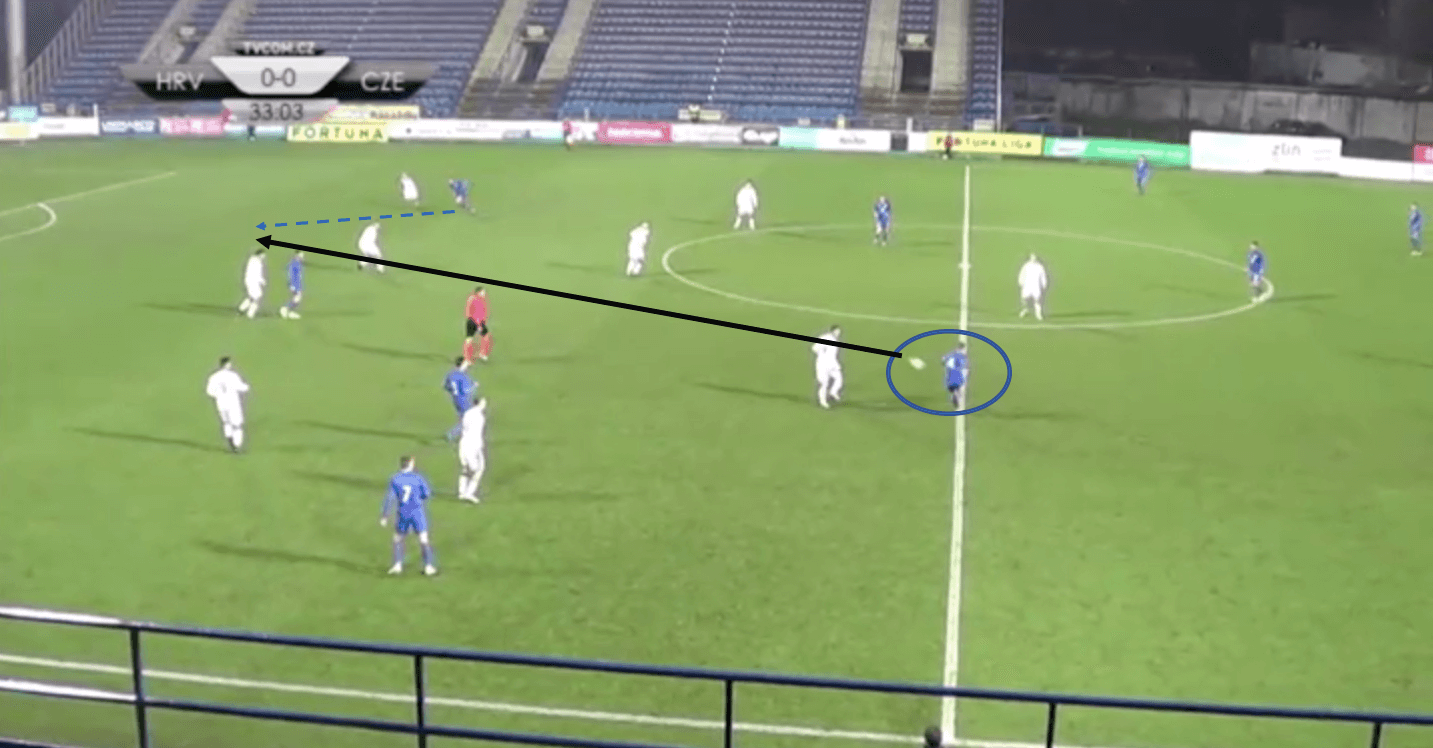 The movement of the forward player is very similar to that of some of Manchester City’s attacking players. The striker has taken his man out wide before cutting back in behind the back four. Palaversa has spotted the disjointed back line as well as the run of his teammate and he again weights the ball perfectly. The striker latches onto the ball and puts the ball in the back of the net. 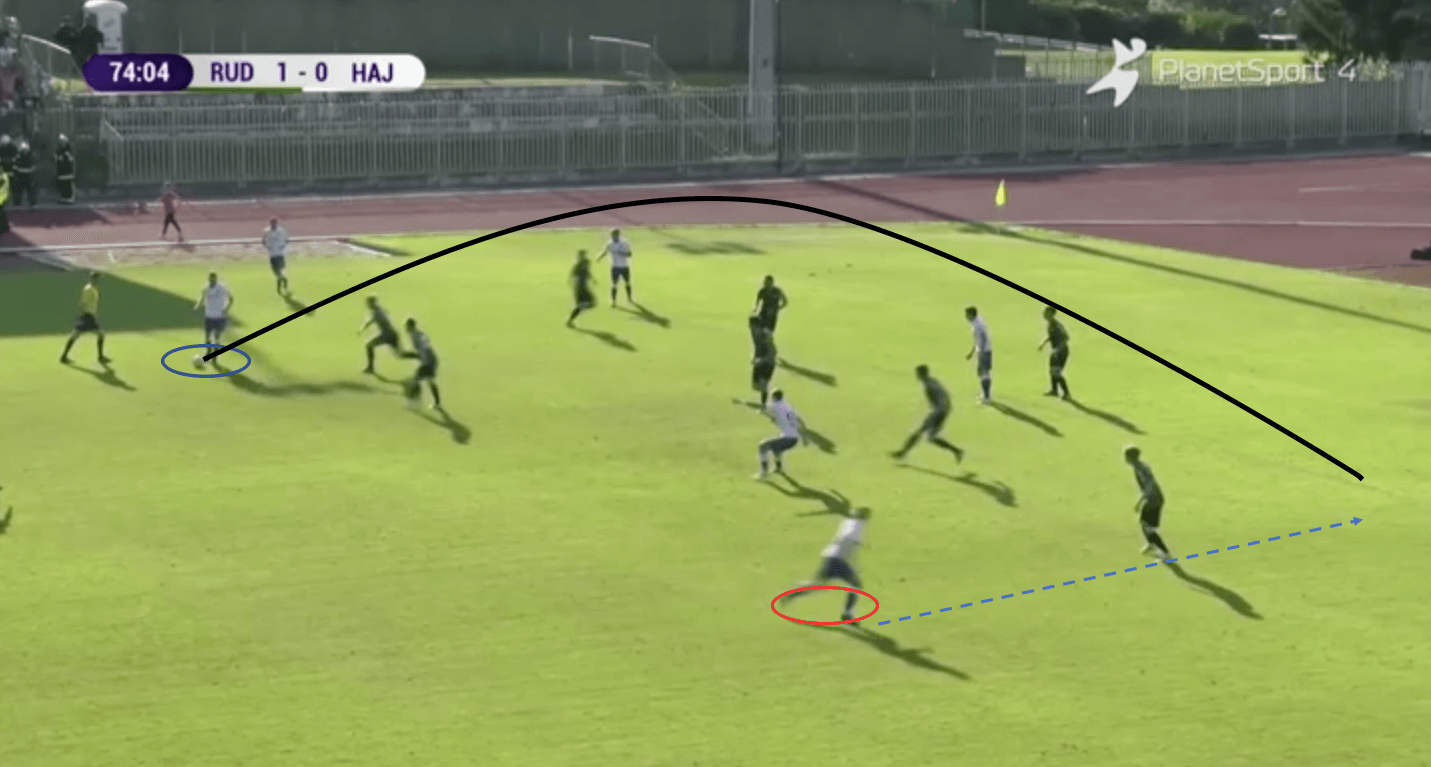 Reading of the game

Being in a midfield diamond Ante Palaversa often has to operate high up the field and also shuttling across to the touchline when Hajduk Split don’t have possession of the ball. He has shown good off-the-ball intelligence when operating in these areas, as shown by the images below. 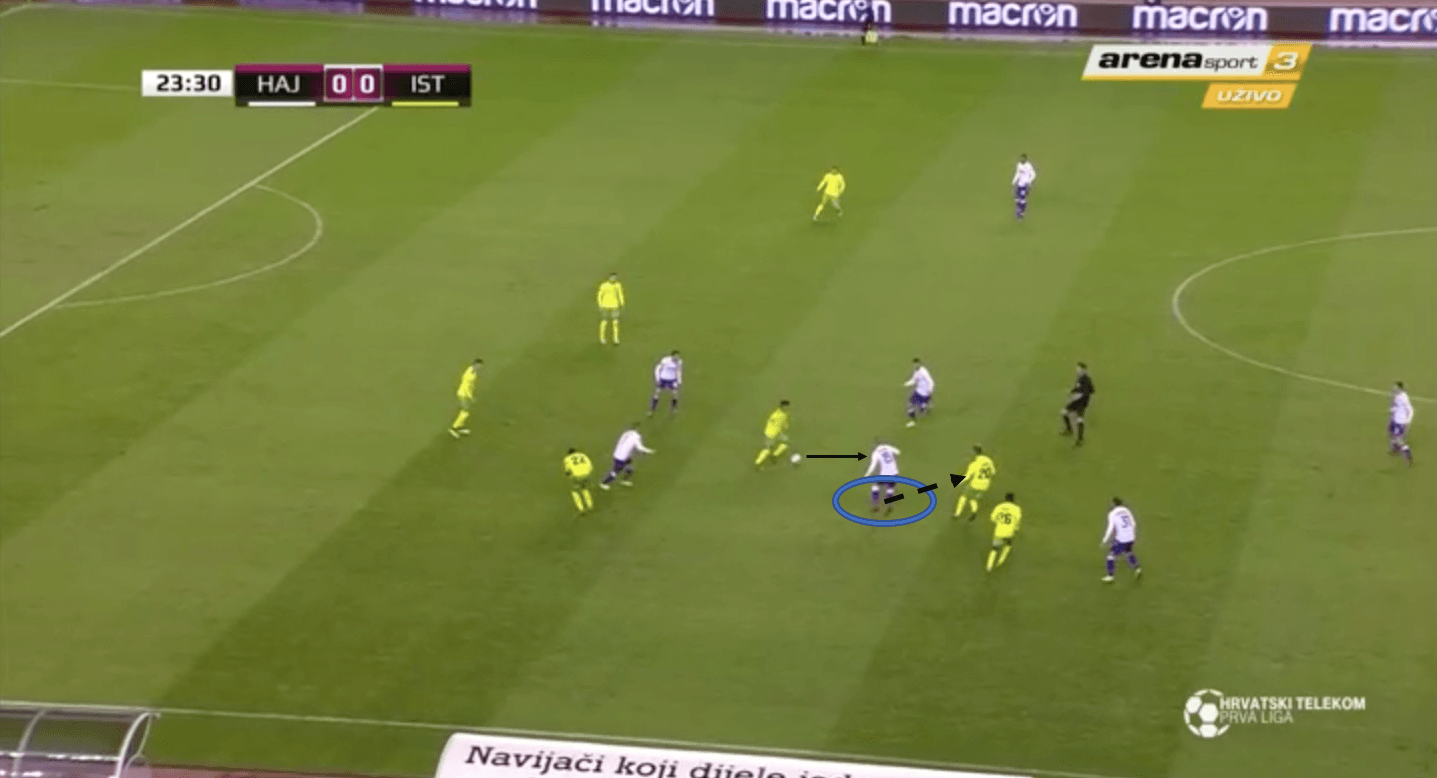 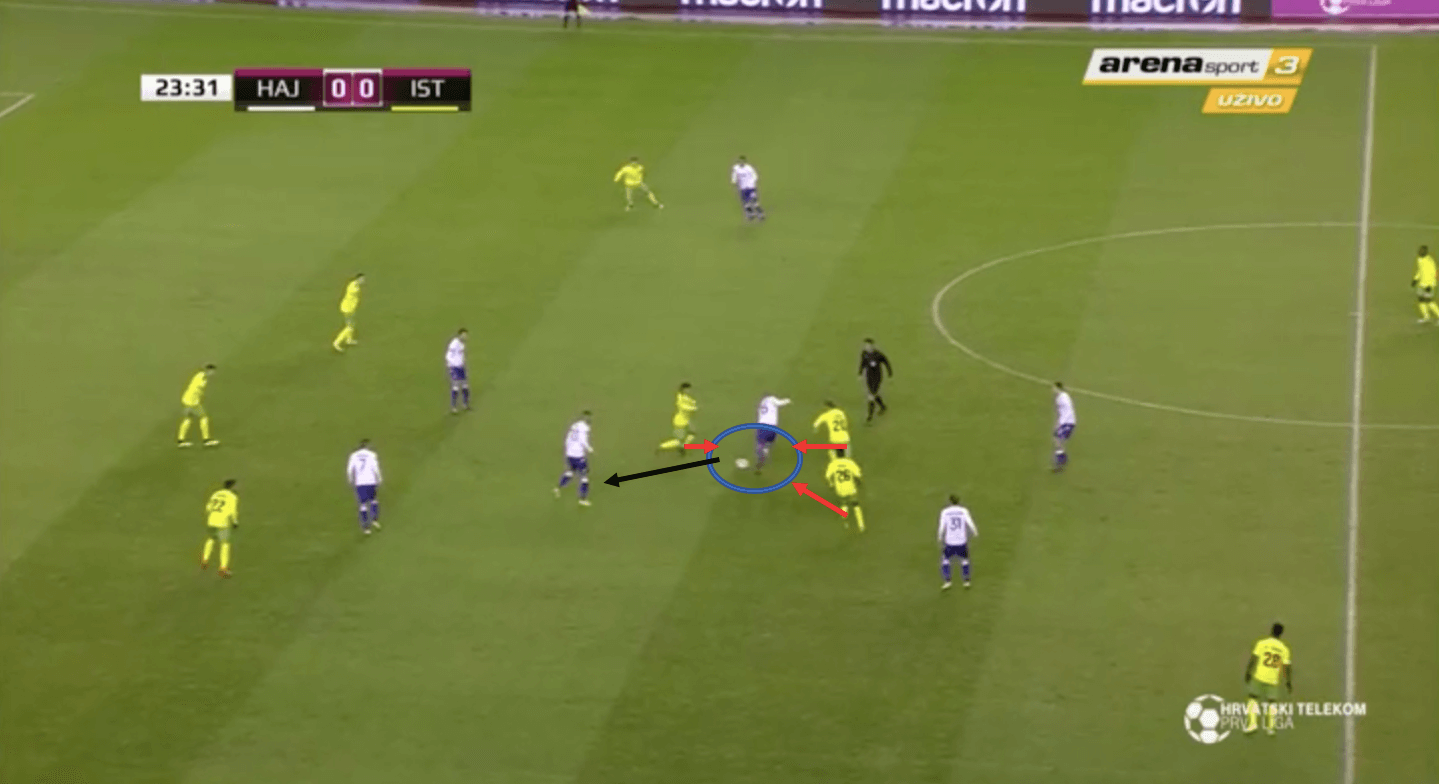 What is most impressive in the above images is Pavalersa’s awareness of where the space is once he has won the ball. After intercepting the pass Pavalersa is swamped by three opposition players, but he knows where his teammates are and where the space on the field is. With a cute back-heel Pavalersa eliminates the three opposition players who are pressing him and his teammate can turn and run at the back four. 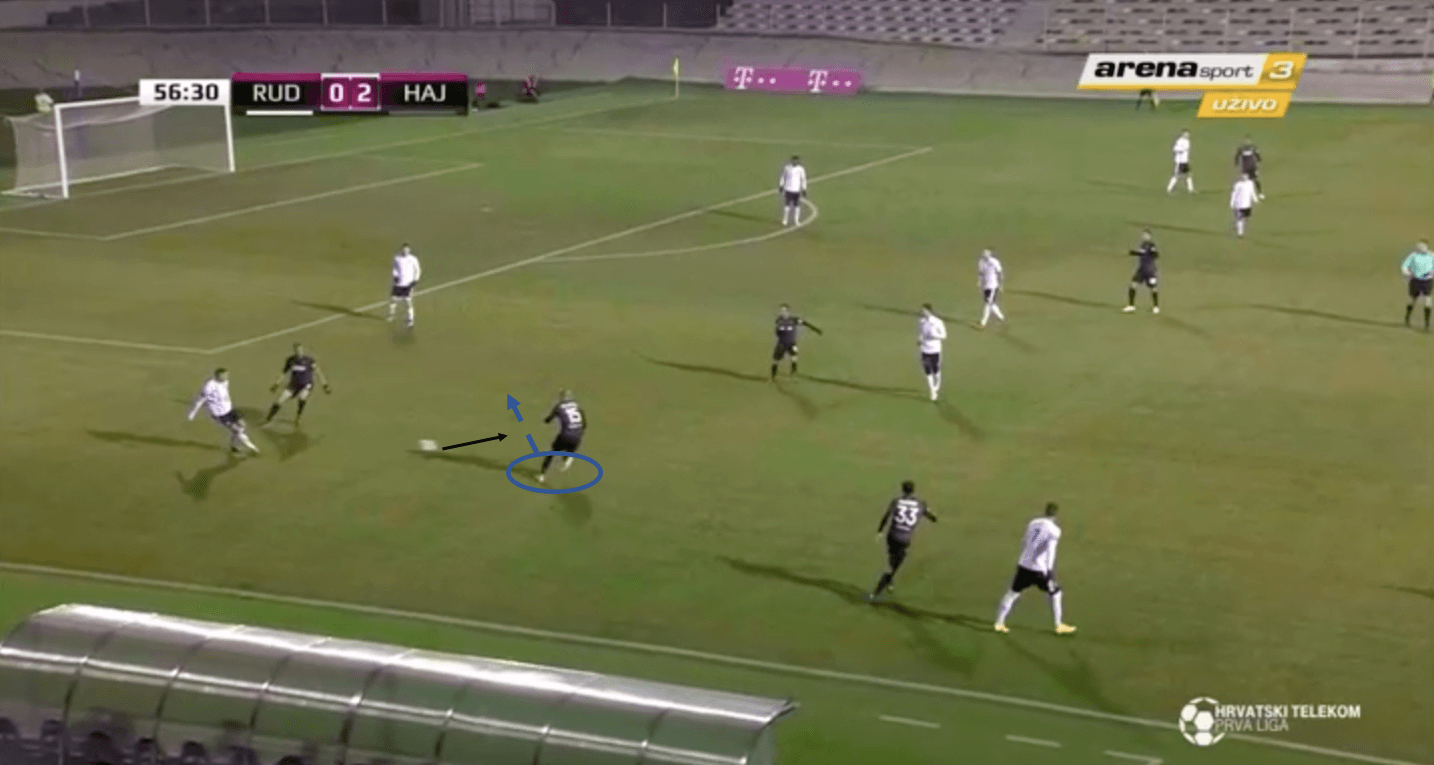 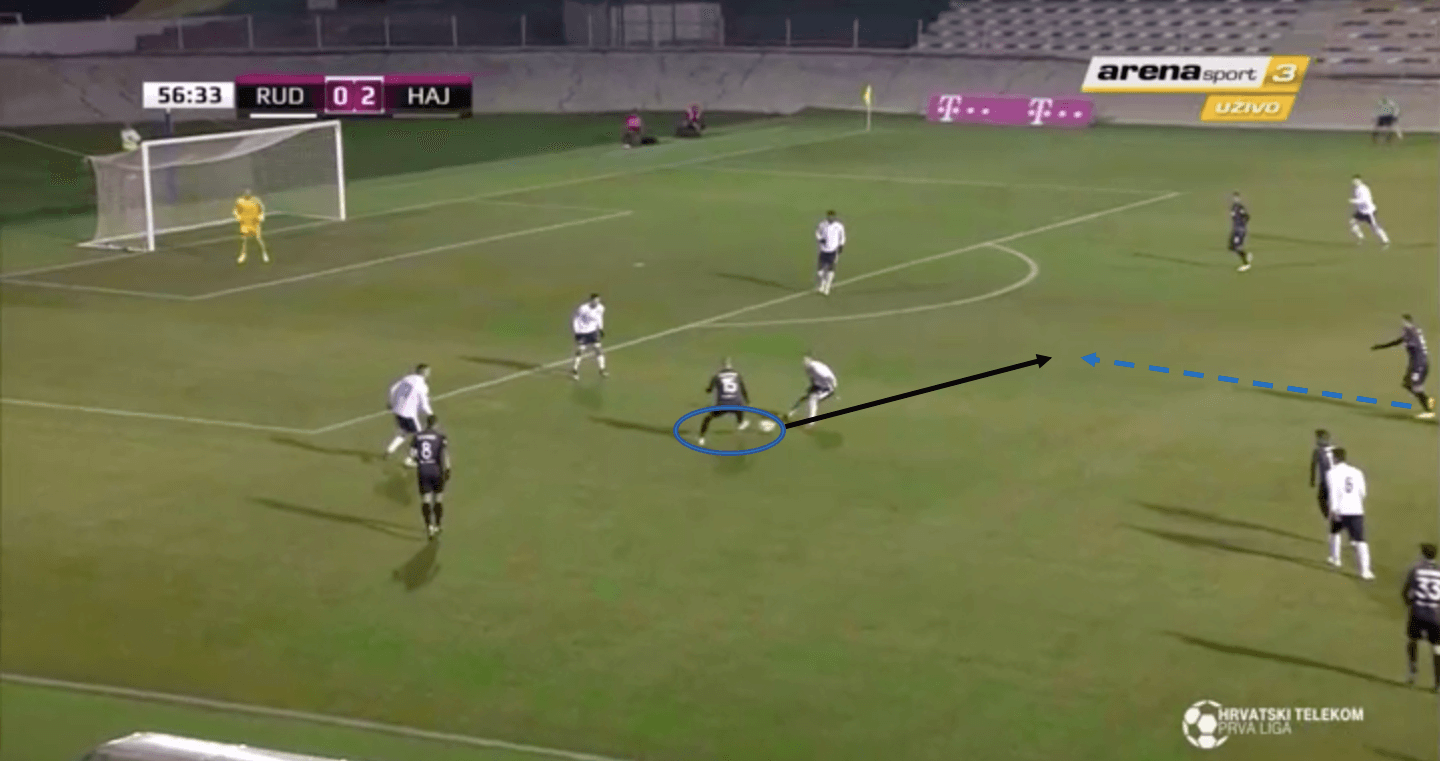 Again, in the images above Pavalersa has read the pass by the opposition player. He quickly puts the ball through the legs of a different opposition player to his teammate in a dangerous position. 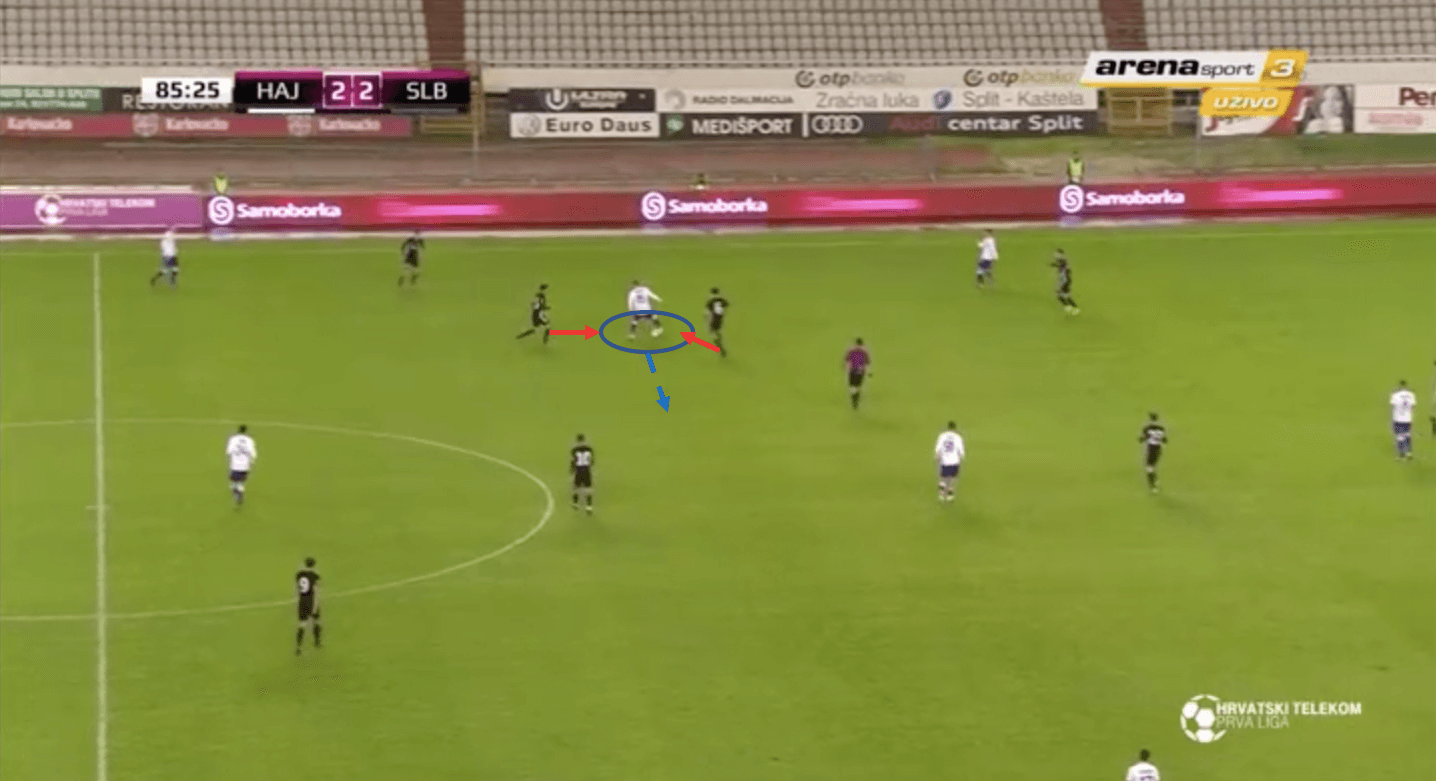 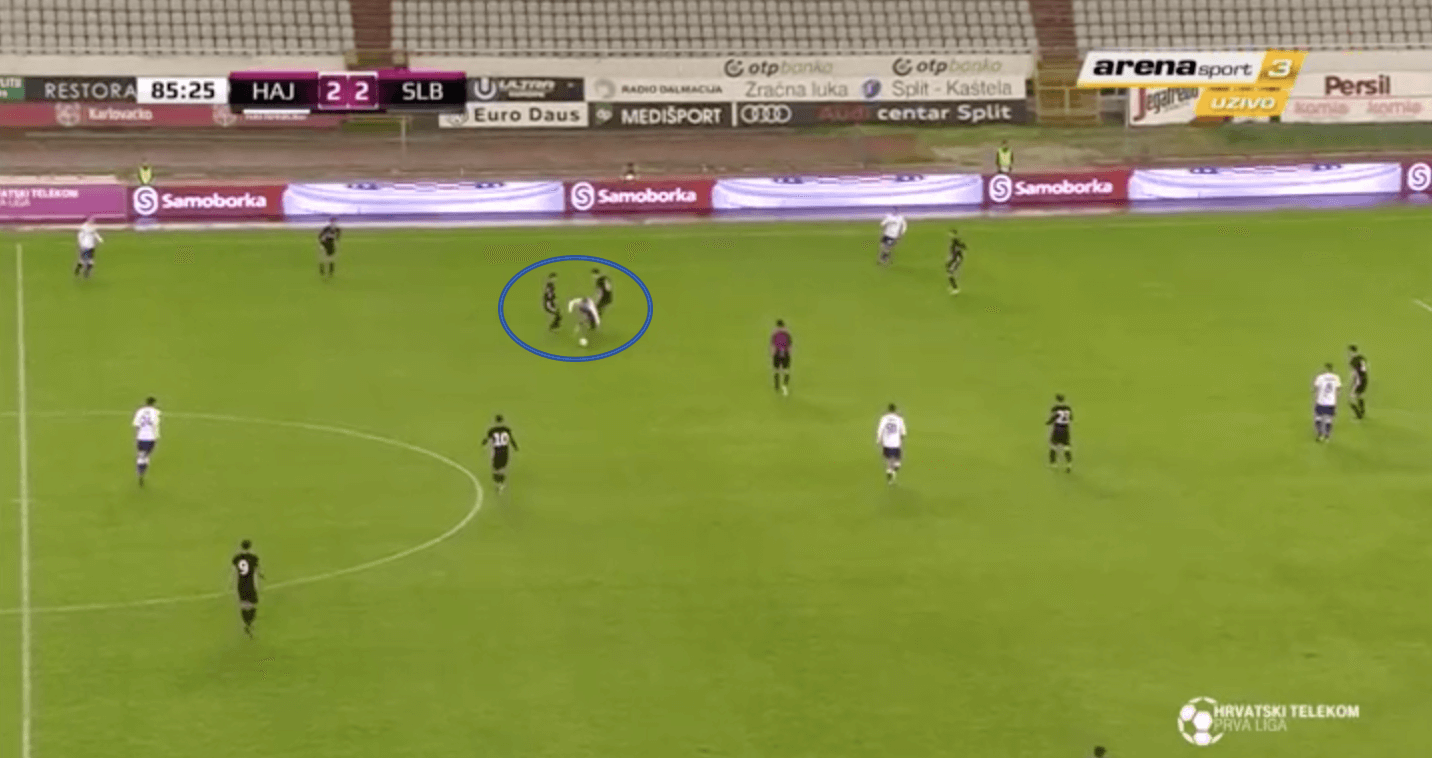 As Palaversa receives the ball in the above images, he is aware of two opposition players pressing him from both sides. He quickly puts in a Cruyff turn to spin into space and force the opposition to foul him.

His impressive reading of the game is backed up by his statistics. Palaversa makes 9.24 recoveries in the opposition half per 90 minutes with 2.61 interceptions per 90 to go with his recoveries. His height and physical power are emphasised by the fact he wins 52% of his aerial duels.

When we compare his stats to those of Fernandinho we can see he holds his own. Fernandinho makes slightly more recoveries in the opposition half on average with 10.65, and also edges out the Croat with 4.95 interceptions per 90 minutes. Fernandinho is slightly less successful in his aerial duels, only winning 45.8%. This may be a factor in former Barcelona coach Pep Guardiola’s going for this transfer.

Being in a slightly more advanced position than where Fernandinho plays, Palaversa has occasionally popped up on the edge of the box. He has chipped in with a couple of goals, as he has a fearsome strike on him. 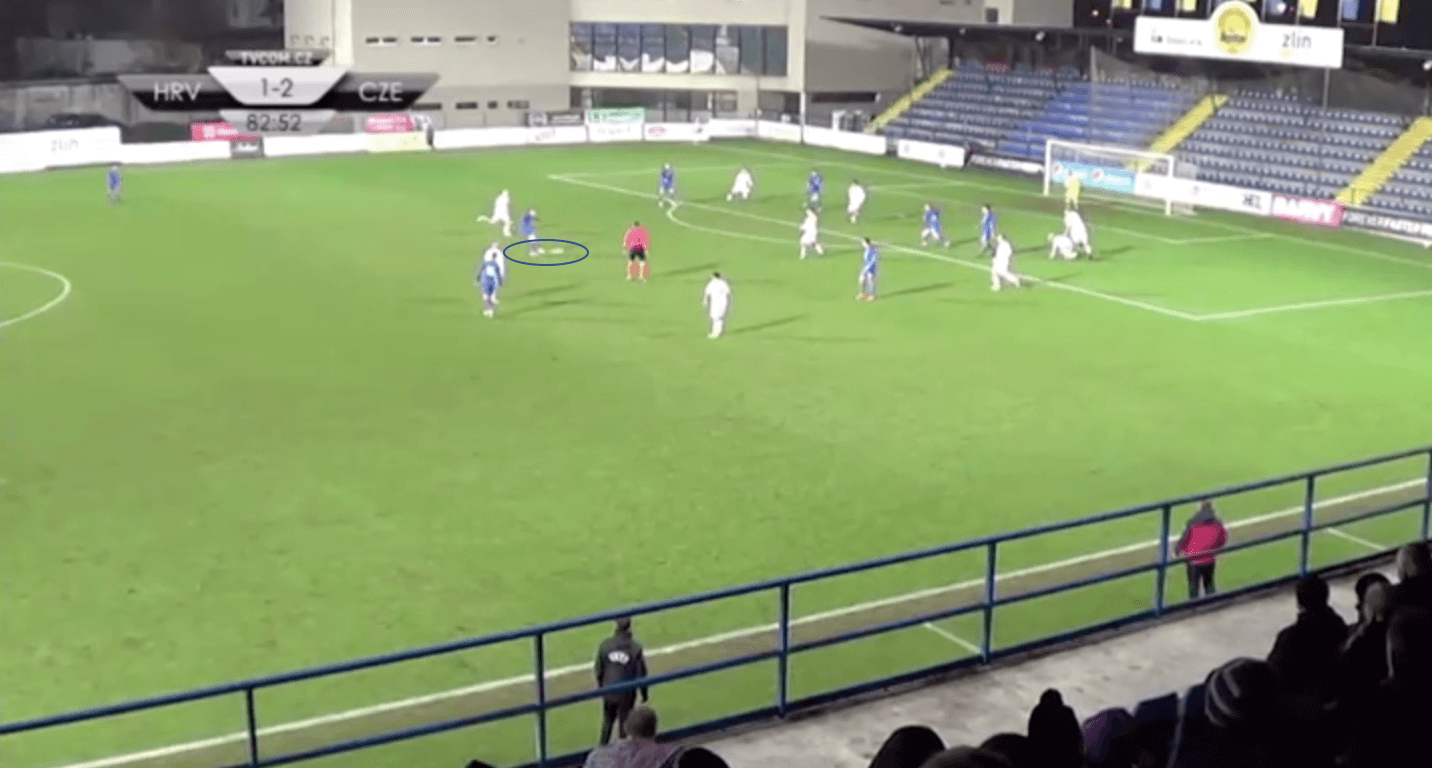 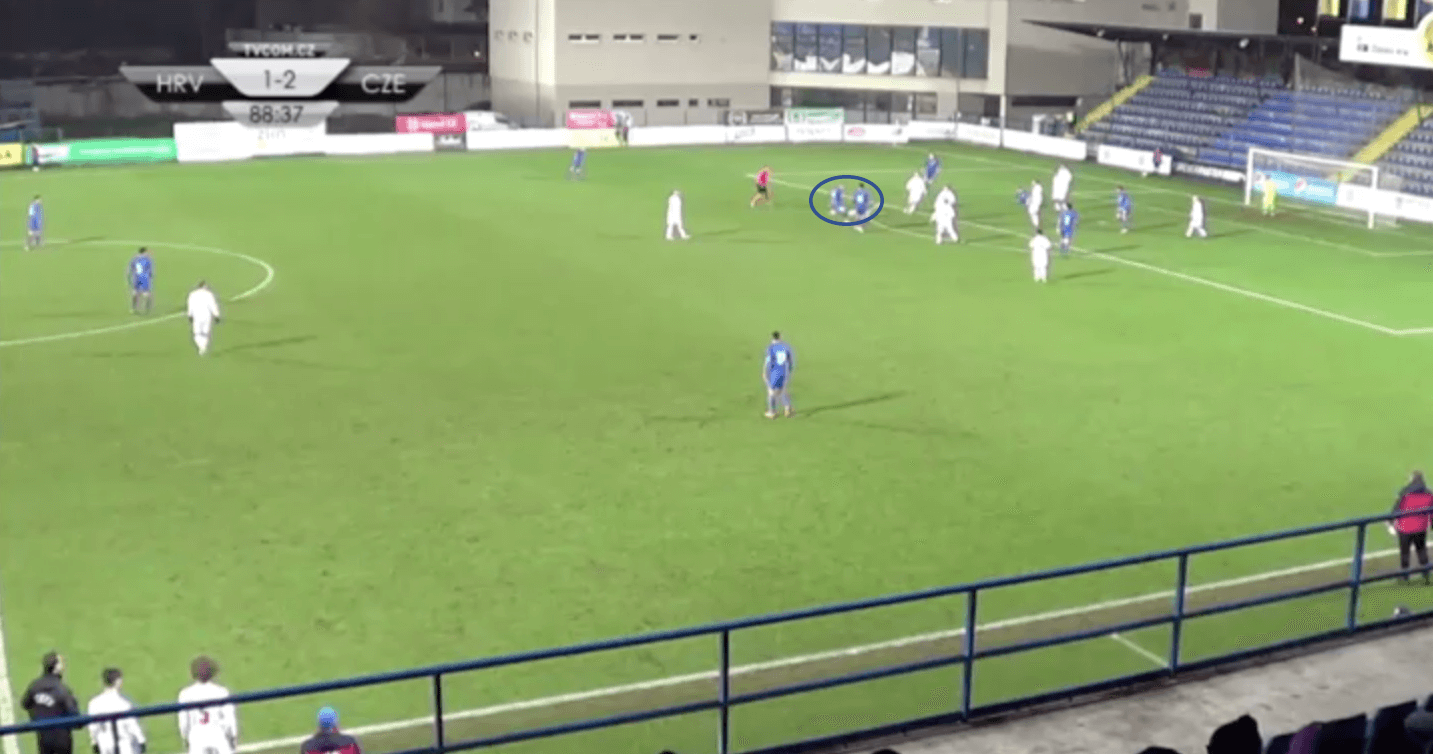 The two examples above were both for the Croatia under-19 side. The first effort narrowly went wide, but the second he caught sweetly on the half-volley and drove the ball into the bottom right-hand corner to level the scores in the 89th minute. 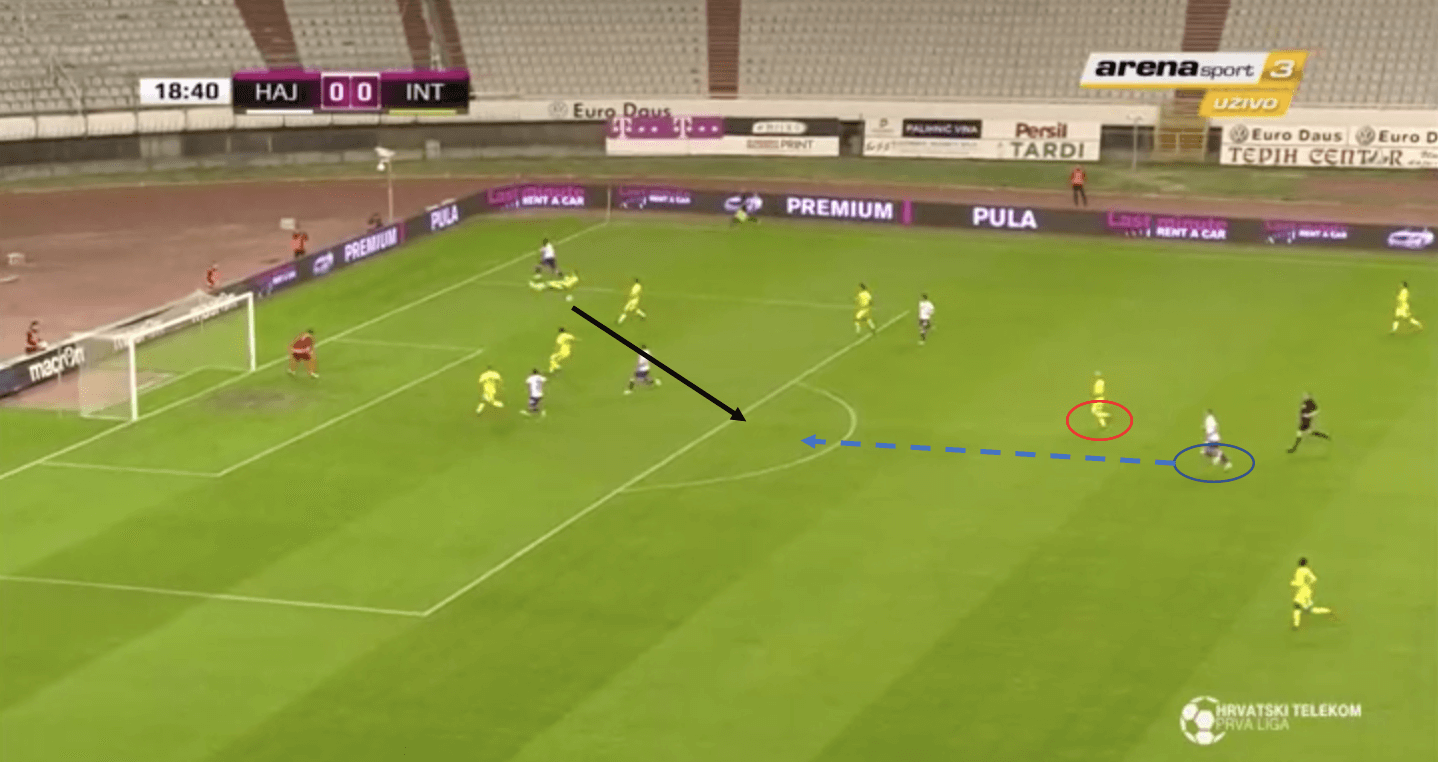 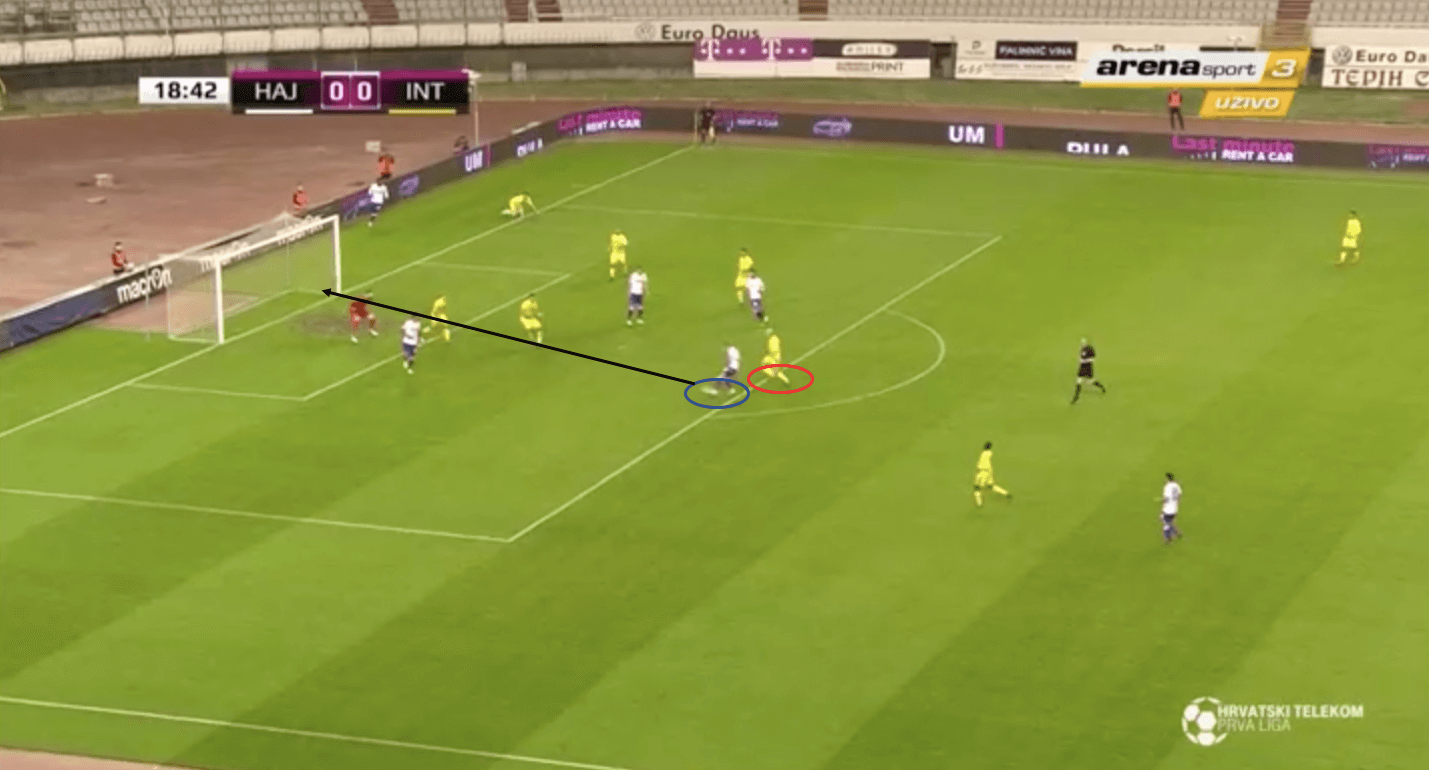 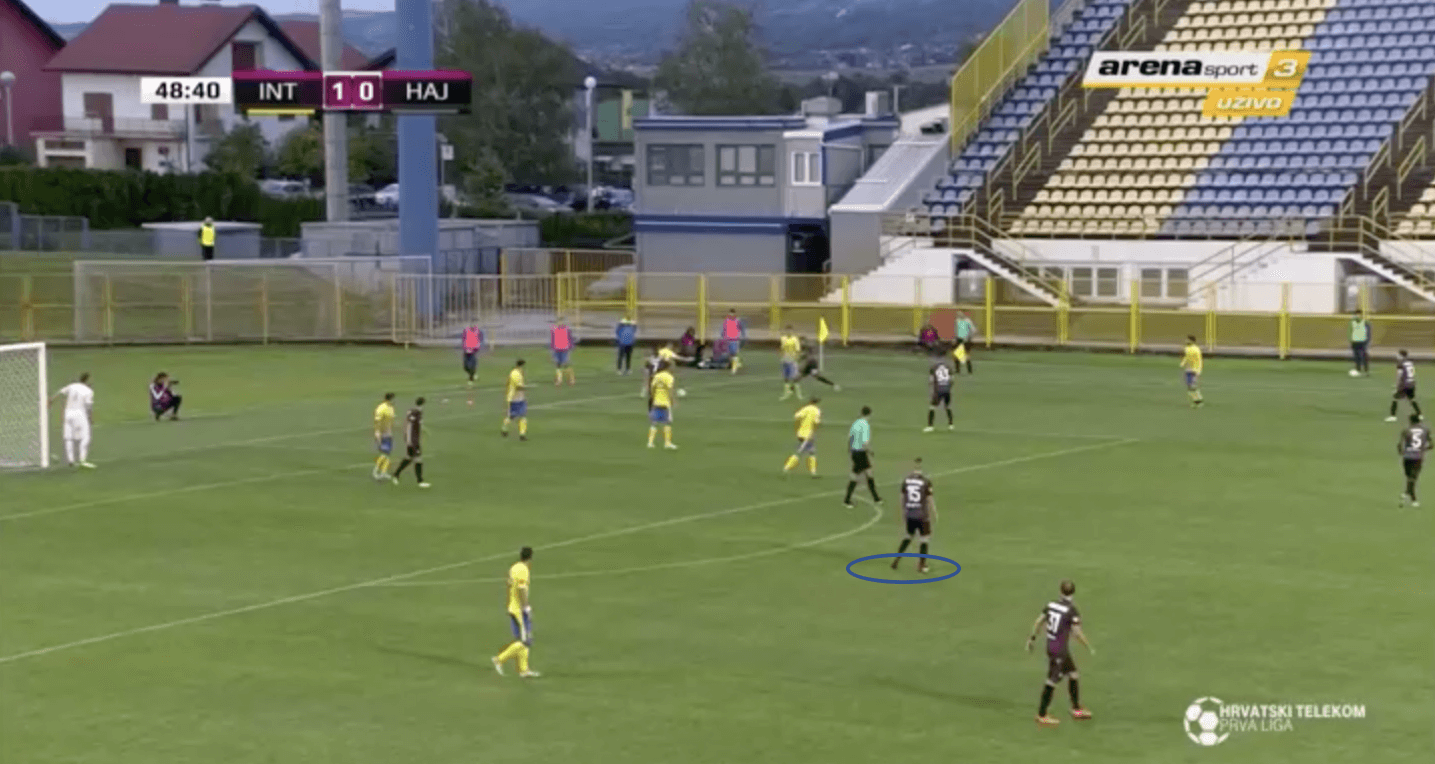 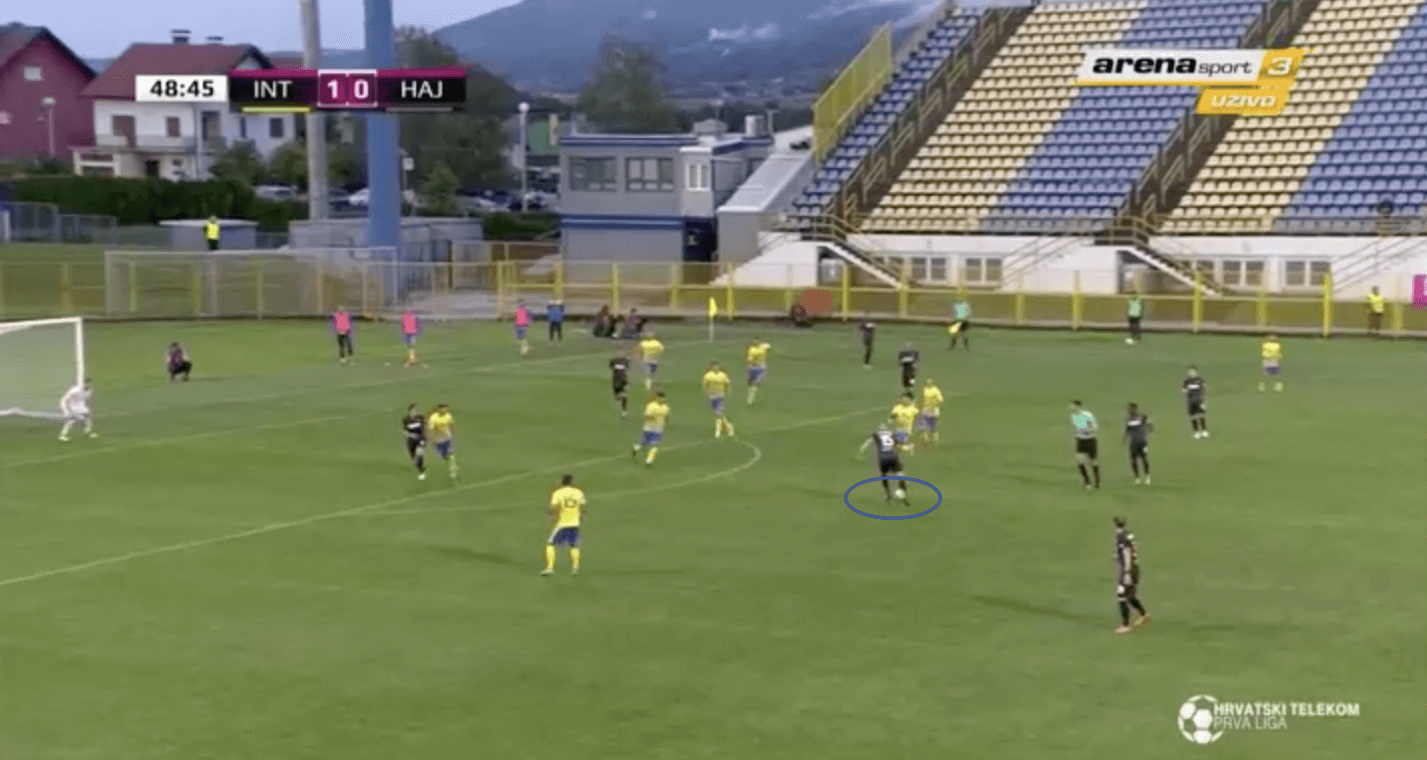 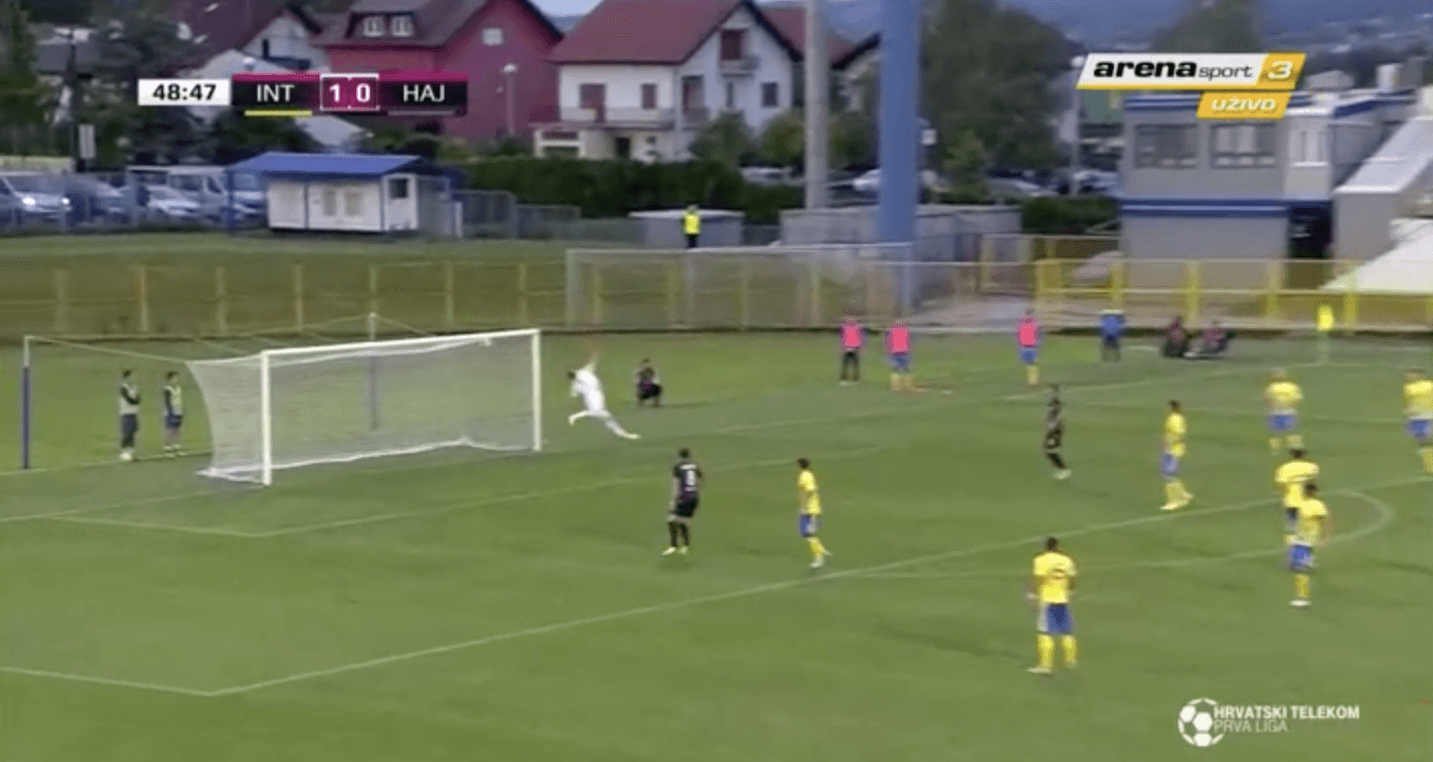 In the final images above Palaversa has positioned himself in a dangerous area on the edge of the box as Hajduk Split have penned in their opposition. Hajduk retrieve the ball and quickly find Palaversa. He takes a quick touch and delicately floats the ball over the keeper for a stunning goal.

For £7 million, the signing of Ante Palaversa represents a relatively low-risk option. In the past Manchester City have signed up a number of young prospects such as Enes Unal, Patrick Roberts, Marlos Moreno and Bruno Zuculini amongst others. Unfortunately, these players have tended to be used as money-makers rather than players who could genuinely feature in the first team. Palaversa looks like he has true potential though, and as defensive midfield is a current problem position for Manchester City, there could be an opening for the Croat.

While the deal is not yet finalised, the word on the street is that Pep Guardiola is very impressed by the 18-year-old and a deal would not be too far away. While it is definitely too early to say whether the people behind the scenes feel Palaversa can be a genuine replacement for Fernandinho, it is certainly a step in the right direction.