Marcelo Brozovic was seen as a rotation player at Inter for a long time. The Croatian wasn’t a player to trust or build the team around for a long time. He was good at times, poor at others and always inconsistent. Not anymore. Since Luciano Spalletti changed Brozovic’s position to a deeper one, just in front of the back-four, the midfielder has gone from strength to strength, established himself as Inter’s most important player and been key in Croatia’s run to 2018 World Cup final. Alongside Mauro Icardi, Brozovic is the player who Inter can’t replace. This tactical analysis will look at what he brings to the Nerazzurri.

Tactical analysis: Why Marcelo Brozovic is vital for Inter

Inter normally play a 4-2-3-1 formation. Brozovic starts as one of the two defensive midfielders when defending. In attack, he drops deep as a lone defensive midfielder and dictates Inter’s attacking play as the shape turns into more of a 4-3-3. Let’s look at what he brings to the team.

Brozovic has all the technical and physical abilities you’d like from a midfielder at a top club. But just as important is his football intelligence and understanding of space. Brozovic is absolutely key in terms of Inter breaking through the pressing of the opposition. He always looks to position himself behind the opponent’s first line of pressing. This is probably due to Spalletti trusting his defenders Milan Skriniar and Stefan De Vrij to use their ability to break the first pressure. The image below shows how Brozovic moves into the empty space behind Lazio’s attackers. This allows Inter to progress the ball cleanly and force Lazio into a reaction while Brozovic can continue the attack by finding Vecino in the right-sided half-space. 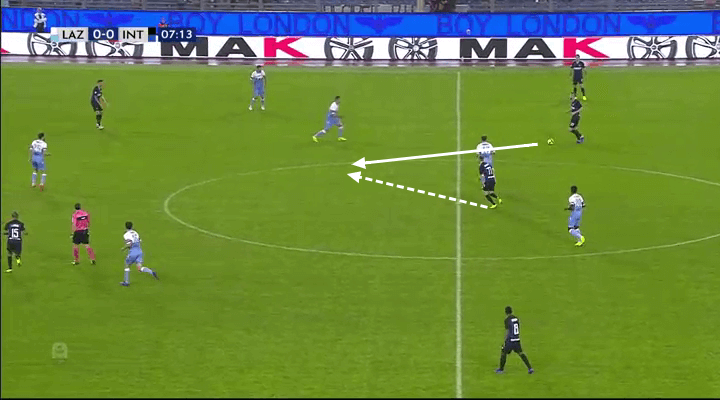 The below image is just another example of this clever positioning. Brozovic finds a position behind Lazio’s attacking duo and Skriniar breaks the first line of pressure and Brozovic can turn and progress the ball forward. If you look closely, you also see how Brozovic has turned his head to have a look over his shoulder. This highlights his intelligence once more as he orientates himself and knows what his surroundings look like when he’s about to receive the ball. 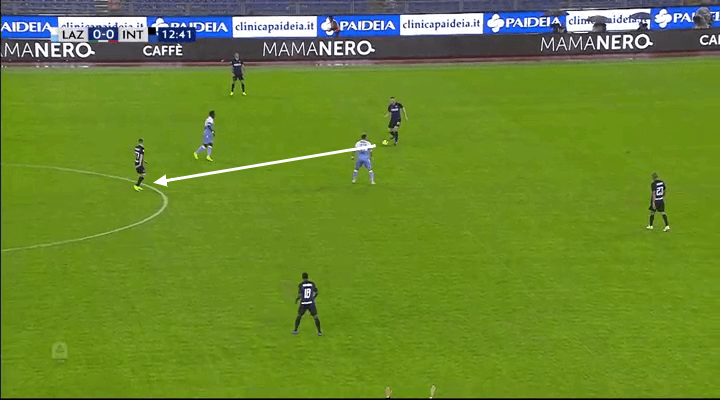 Brozovic is the key when Inter look to build out from the back. His calmness and press-resistance are vital in this regard. Brozovic also seems a very confident player and doesn’t panic when put under pressure. The sequence of the two images below highlights this ability. The goalkeeper Samir Handanovic plays the ball to the Croatian. Most midfielders in this position, with his back to play and an opponent close by, would bounce the ball off to the left-sided central defender Miranda. This is what Lazio striker Felipe Caicedo thinks. He’s already started a run towards the Brazilian defender. 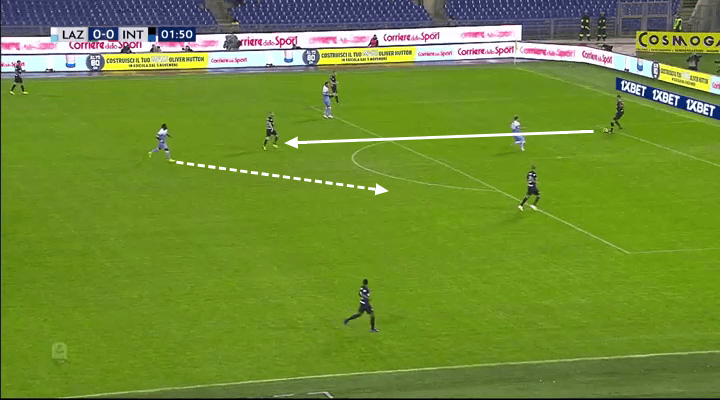 Brozovic knows what he’s doing though and has orientated himself and is well aware of Caicedo’s run. He receives the ball, turns into the empty space, attracts pressure from a midfielder and then plays a great progressive pass into Vecino behind Lazio’s midfield. From pressed outside his own penalty area Brozovic has put Inter on the attack in a great position in the attacking half. 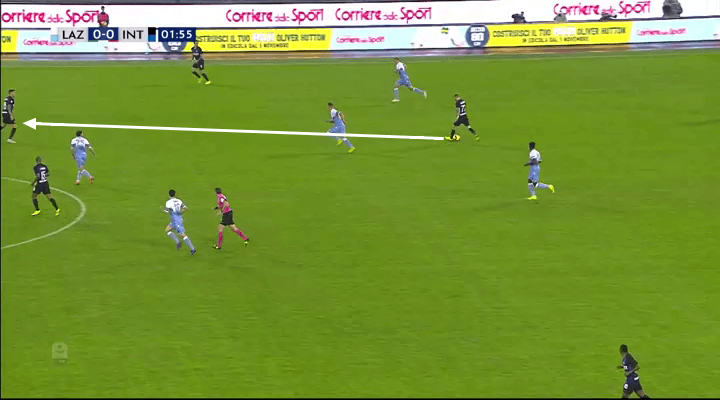 I’ve only looked at Brozovic positioning in an attacking sense here but he’s also excellent defensively which he showed at the World Cup when always covering behind Luka Modric and Ivan Rakitic. His Serie A average of 3.2 tackles and 1.5 interceptions highlights his defensive importance to Inter as well.

Brozovic has been Serie A’s top passer this season with an average of 84.5 passes per game at a completion rate of 89.5%. This is a clear increase on last season’s average of 53 passes per game which tells you about Brozovic’s raised involvement in Inter’s possession play. His completion is also up, from 87% last year, and these stats together show a player taking more responsibility when Inter have the ball.

The main reason for Brozovic’s importance to Inter’s attacking play, aside from his clever positioning and calmness with the ball, is his excellent passing ability. Brozovic also has a great understanding of space and where to play the ball at specific times. In this image below he rightly identifies the right wing as Inter’s best option of progressing the attack. He duly switches the ball out to Sime Vrsaljko and Lazio are forced to move their shape over to the opposite side. 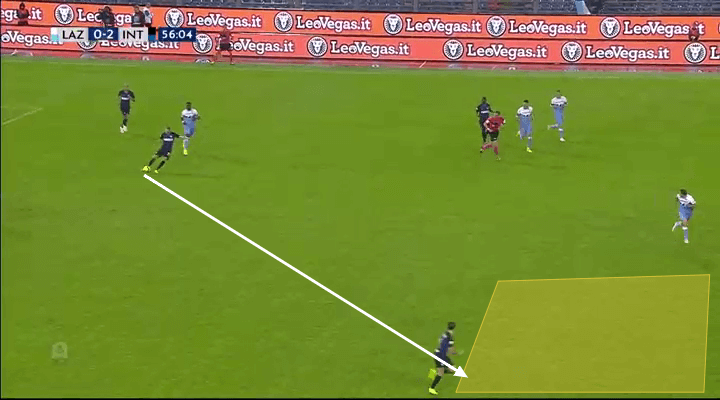 Below is another example of Brozovic switching the play. In this case, he uses his great long-passing technique to spread the play wide. 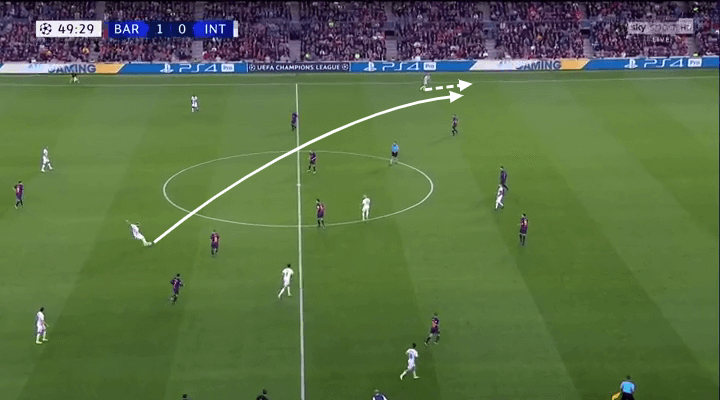 In this last image, Brozovic has found space in midfield and plays the ball in behind Lazio’s defence into the path of Vrsaljko down the right. 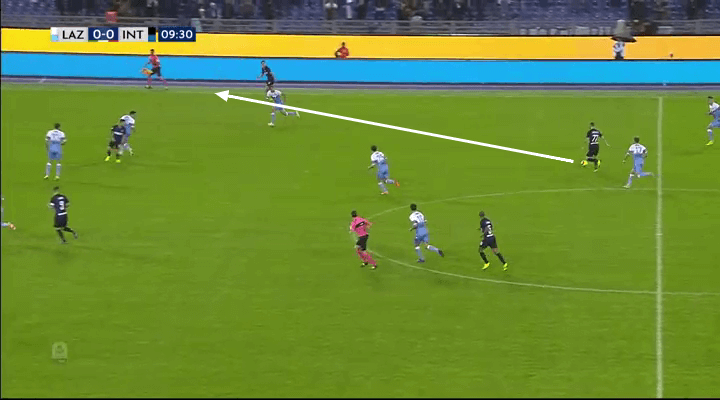 By moving the ball from side to side, Brozovic forces teams to constantly move and adjust their defensive positioning which leads to him then being able to pick them apart with passes through the centre. The Croatian has become a true midfield metronome for Inter.

Quality in the final pass

Brozovic has always been a creative player and despite playing as a defensive midfielder, he averages 1.2 key passes per game. Last season saw him average 2, but he also took set-pieces then. His creativity and passing ability over short as well as long distances makes him perfect for finding the final pass when Inter attack.

His long-passing ability is evident in this goal for Inter against Verona last season. Brozovic has the ball with the entire Verona team in front of him. He spots the run of compatriot Ivan Perisic and plays a wonderful pass over the Verona defence into the path of Perisic, who scores. 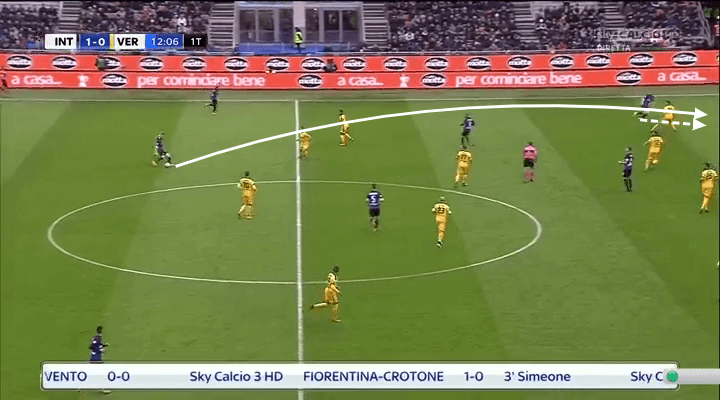 The image below highlights the combination of dynamism and quality Brozovic offers. He first breaks through midfield on the run before threading the ball through to the run of Matteo Politano. 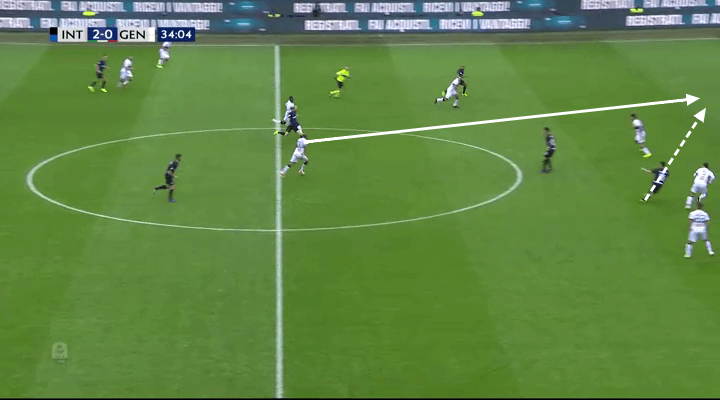 Brozovic ability to create from deep is key for Inter when the other midfielders lack the creativity of the Croatian. Most of Inter’s creativity is located on the flanks, but Brozovic gives them a central threat too.

Since Spalletti started playing Brozovic as the regista, the playmaker, of his team Inter have improved and Brozovic has been superb. After spending years as an inconsistent attacking midfielder, a box-to-box central midfielder or even wide at times, Brozovic has now found his place at the base of midfield where he excels defensively as well as offensively. As Inter look to challenge Juventus all the way for the Scudetto while also progressing in the Champions League one thing is certain. Marcelo Brozovic will be absolutely vital.