Santiago Solari made his Estadio Santiago Bernabeu debut as Real Madrid coach on Saturday but it was far from the dream start that he may have been dreaming for. Rather than a steamrolling of Real Valladolid, now owned by former team-mate Ronaldo Nazario, it was a struggle which, for the most part, looked like it could have gone either way. In the end, luck told and finally it swung Real Madrid’s way with an own goal and a Sergio Ramos penalty, a la Panenka, giving his team a vital three points in La Liga for the first time since September. Here, our tactical analysis will use statistics to identify what key points Real Madrid can take from the game as they got back to winning ways.

Sergio Reguilon is a talent in the making

There were plenty of concerns when it was confirmed that the youngster would be the back-up to Marcelo this season. The 21-year-old spent last season playing in the third tier but when given his La Liga debut on Saturday, he looked the best man on the pitch against Real Valladolid. In fact, only Thibaut Courtois and Sergio Ramos boasted a higher successful actions rate than Sergio Reguilon’s 77% and neither of them were as offensive or risk-taking as the left-back.

One area in which he really excelled was in his attacking contribution. Reguilon made more crosses, with eight, and completed more, five, than anyone else, bursting down the flank with real threat, often exploiting space as Real Valladolid drifted to the right and allowed him space to roam free. That opened up space for him to complete all of his five dribbles, win all of his offensive duels and even make more progressive runs than Gareth Bale and Karim Benzema put together.

Defensively he was strong too, with only Sergio Ramos winning more interceptions than the youngster. There is still room for improvement, but for a La Liga debut, it could not have been much better for the youngster. If Julen Lopetegui is to have a legacy at the club, Reguilon’s role with the first team may become the strongest positive of all.

Where Gareth Bale looked dull and lacked any real incisive threat, the confidence, and perhaps naivety, of Vinicius Junior saw him reap rewards. Whereas in 70 minutes, Bale made just one progressive run, the Brazilian teenager doubled his return in just 20 minutes. That bravery was what made the difference and would bring about the first goal, with his pace and energy dragging Valladolid’s rigid system apart.

Exploiting the gap left by the substitution of Toni Villa for the hosts, Vinicius identified that there was space on his opposition’s right in between the wide midfielder and the man in the middle, something he looked to exploit as he cut back and skipped between markers before getting his shot off. It was, in truth, a woeful effort which would have gone out for a throw-in, but Kiko Olivas got in the way to deflect the ball into his own goal.

If the two players keep up these kinds of performances, then it will only be a matter of time before the Welshman is replaced by the new kid on the block. Statistics struggle to prove it, but the reception for the two players was markedly different on Saturday. A standing ovation for the youngster as he got fans on the edge of their seats was a stark contrast to the whistles and boos that accompanied the supposed superstar as he departed.

It’s more about luck than “cojones” for Solari

Santiago Solari spent his first press conference as Real Madrid’s first team coach highlighting the need for his players to show their “cojones” against Melilla and Real Valladolid. In the end, though, it was the typical promoted Castilla coach luck which got him his second consecutive win in the job to give him the best start to the role of any coach since 1956.

His side showed little to no improvement for the first 82 minutes of the game and looked as turgid and slow as they had throughout Julen Lopetegui’s reign. After Real Valladolid twice hit the woodwork, it was only when a slice of luck came their way and Vinicius’ wayward effort rebounded into the net that the game changed in their favour, with an early Christmas gift given to allow Sergio Ramos to score from a clumsily conceded penalty.

It would be unfair to ignore the fact that Solari did show some bravery to make the substitution to introduce Vinicius to change the game. However, there was a certain slice of luck to his first victory in the job against top-flight opposition. It was far from a glowing recommendation that he should be given the job long-term, but it is the kind of victory that has evaded Los Blancos throughout the season and Julen Lopetegui was not lucky enough to get.

The end of the midfield trident is near

Toni Kroos. Luka Modric. Casemiro. Titans of the European game. The best midfield combination in history, possibly. Yet it seems that together, they no longer have the same effectiveness that they once offered. As early as 56 minutes, Solari ditched the midfield three in favour of a more offensive set-up with five men in midfield, removing Casemiro from the holding role which he has expertly patrolled in recent years. It may be too soon to come to conclusions, particularly at home against a side which Real Madrid should be beating comfortably, but it was far from a good sign.

Given the wealth of attacking talent, it may not be a surprise. Needing to break teams down, the role of Casemiro has been one of protecting his team on the counter and acting as a third central defender when full-backs bomb on. When more dropped points would threaten any faint hopes of a title challenge, it’s easy to see why Solari was prepared to gamble and go with a more offensive set-up.

The truth is that all three of the trio are performing below par this season. That’s not to say that they haven’t seen plenty of the ball, rather that they have not been as clinical with it. Luka Modric looks more tired than ever after the World Cup whilst Toni Kroos’ assist per game ratio has almost halved from 0.17 to 0.1 this season compared to last. Even Casemiro, the midfield bulldog, has seen his average number of interceptions per game drop from 7.14 to 5.85. 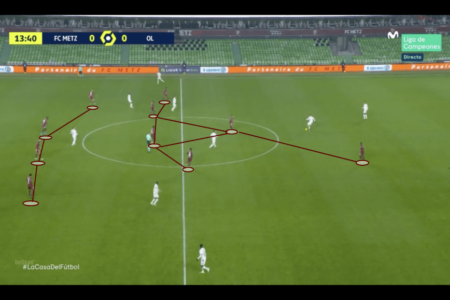 Metz hosted Lyon in this past Sunday’s late kick-off in Ligue 1, and the away side took all three points […] 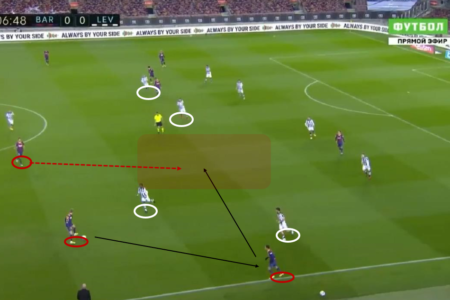 Barcelona has not performed well this season, and Levante is also ranked at the delegation zone. They both struggle to […] 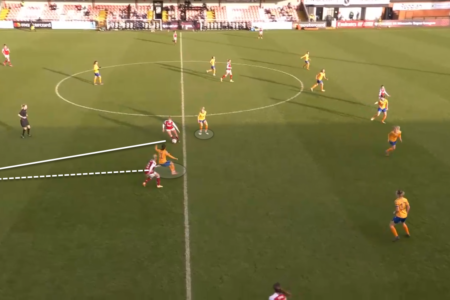 Before the FAWSL winds down for the winter break, Arsenal Women took on Everton Women in what was billed as […]