After arriving on the South coast last summer for around £16 million, the versatile Spanish defender joined European giants Chelsea in a deal worth £60 million. Marc Cucurella quickly adapted to life in England and the Premier League, featuring 35 times and playing over 3,000 minutes in the league last season.

Cucurella was clearly a favourite of Brighton boss Graham Potter and trust was installed with the number of games Cucurella played. A product of the Barcelona youth academy has now made his step up into an established Champions League side as he looks to further his career.

His move to Chelsea provides them with cover as well as defensive versatility, having played as a left-back, left wingback and also left centre-back in a back three. His role at Brighton will be similar to the one at Chelsea in the sense of formation similarity.

This scout report will provide a tactical analysis of how we will look at how Cucurella is likely to be deployed in this Chelsea team. It will be an analysis of the new signing and the tactics that will be used by Thomas Tuchel.

Against Everton, and throughout the Thomas Tuchel era, Chelsea have set up in a 3-4-3 formation. This involves wingbacks and three centre-backs who remain tight out of possession but expansive and comfortable on the ball in possession. Below is the pass map of the Chelsea lineup against Everton. The 3-4-3 formation is clear to see. 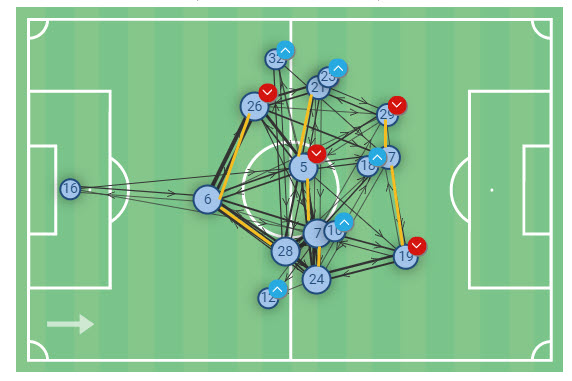 The defensive unit in possession is encouraged massively to step high up the pitch and force their opponents to drop deep. When on the ball, the centre-backs drive up the pitch and join in the build-up and positional attack during sustained pressure. The use of the defenders helps create overloads and allows for Chelsea to keep possession comfortably. 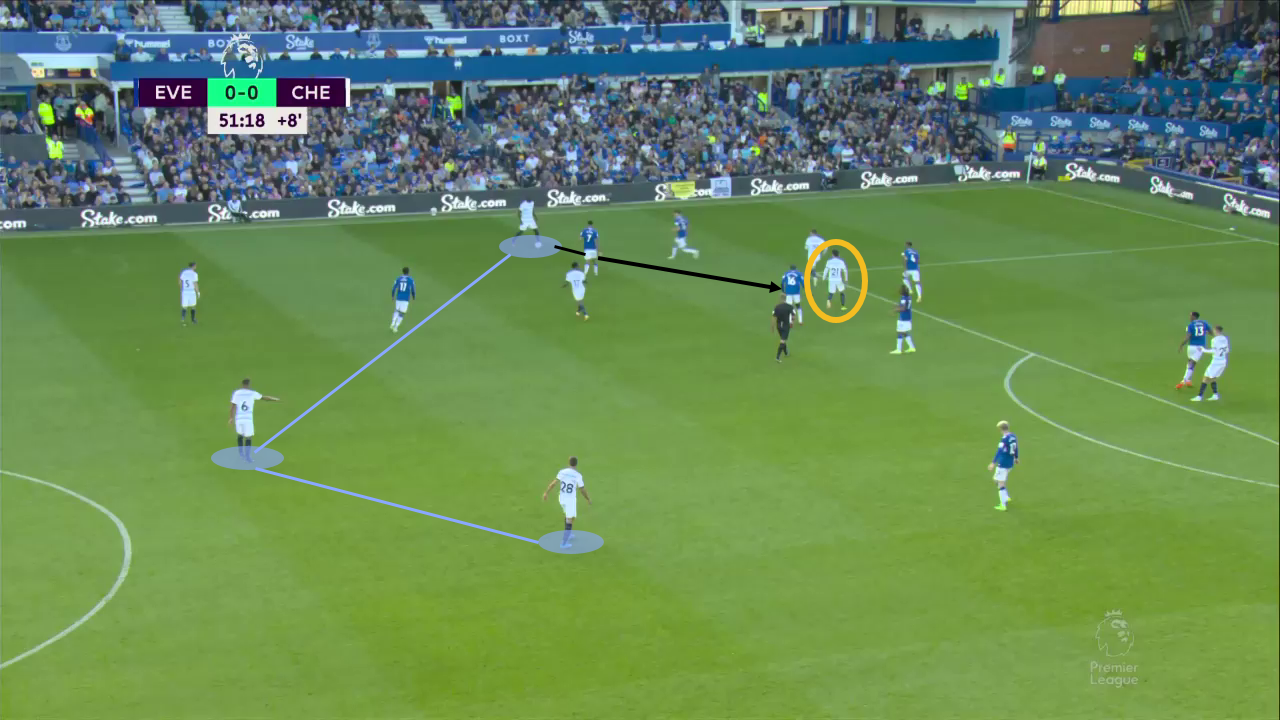 Above is the move which won Chelsea a penalty. Left centre-back, Koulibaliy, is seen very high up the pitch and on the ball, making a killer pass for left wingback, Chilwell. Both players are part of the defensive unit and combine in the final third of the pitch to win a penalty. These roles can be played comfortably by Cucurella and are areas on the pitch he is used to finding himself in. This move leads to Chelsea converting and winning the game 1-0.

The importance of ball-playing, confident defenders is proven here as the game is won by the involvement of the defensive players. Cucurella is a very versatile player who is more than capable of adapting and fitting into either of these roles.

Furthermore, the attacking encouragement given to Tuchels defenders could be seen throughout the game against Everton. Below, Koulibaliy can be seen making a very advanced run forwards and being the further man up the pitch. This attacking influence is something which is vital for Chelsea and the signing of Cucurella will only enhance this. 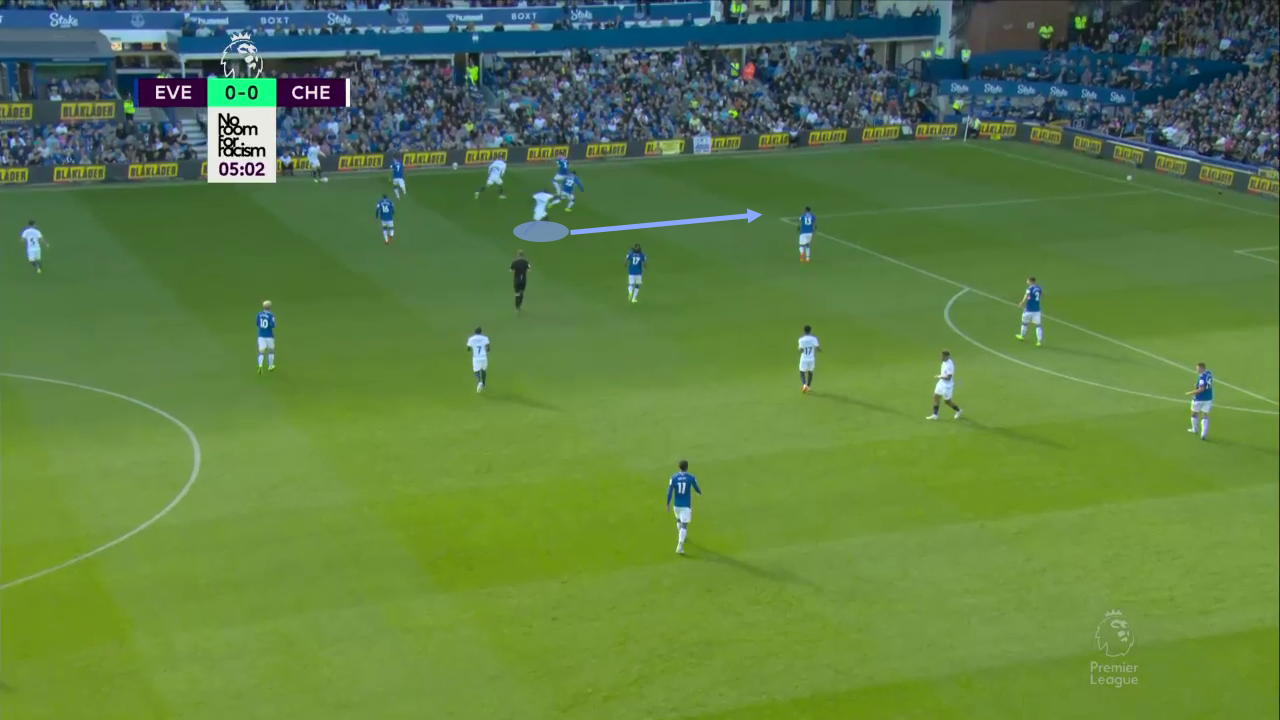 In possession, Cucurella is one of the most progressive defenders in the league. His comfort on the ball is evident throughout his brilliant performances last season. Although he has not got a high number of goals or assists, his ability to progress the ball is what makes him so dangerous. His ball-playing ability will be a massive asset to any side in the Premier League and he will slot into Chelsea’s defence easily.

Below is a visual of data collected from the 2021/22 Premier League season ranking centre-back’s ability to progress the ball into the penalty area. Cucurella’s data is gathered from his matches played as a centre-back, proving his impact on the team’s attacking build-up. 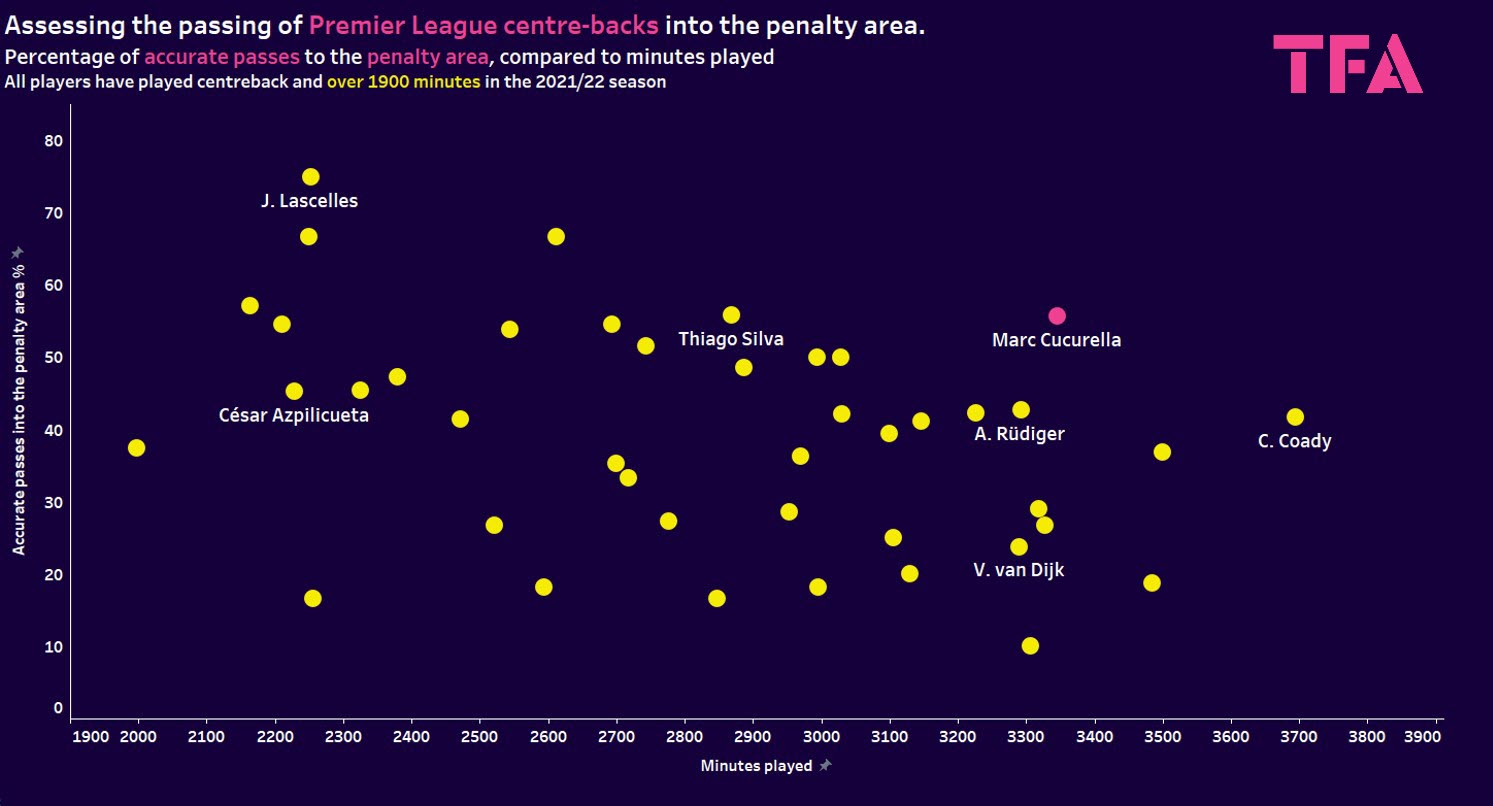 In terms of accurate passes into the penalty area, Cucurella ranked as arguably the best in the league last season, from centreback. In comparison to Antonio Rudiger, who was seen as Chelsea’s most progressive defender, Cucurella outscored him in this field. Rudiger was a big part of Chelsea’s defence and the way he played was going to be missed if he wasn’t replaced.

Cucurella loves to step into the midfield area with the ball at his feet. Below is an example of how he increases the pace of the game by driving at a high speed and progressing play. He loves to move forwards and create overloads with the left wingback, something that Koulibaliy did a lot of on the weekend against Everton.

Cucurella was given an important role in his time at Brighton. He was allowed free reign to attack forwards and exploit space. Given time to get the ball under his control, he becomes very useful. He will be able to play to his strengths in this Chelsea team and Tuchel will enable this with his use of a back three. 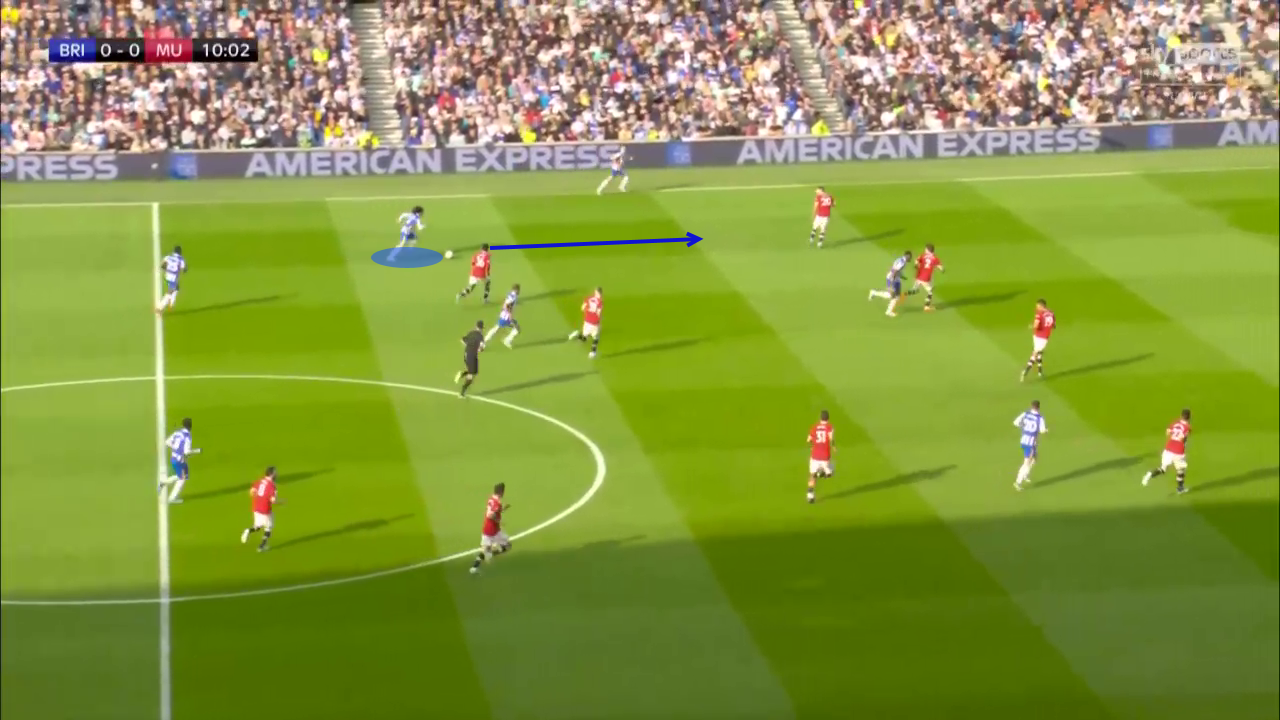 Another example of Cucurella’s advanced positioning is when the team is attacking the box. He chooses to wait and attack the box late arriving to create a chance for his teammates to pick him out. His understanding and awareness mean he can offer great output for Chelsea. Again, Koulibaly was seen making very advanced runs against Everton, something which Cucurella is well up to. 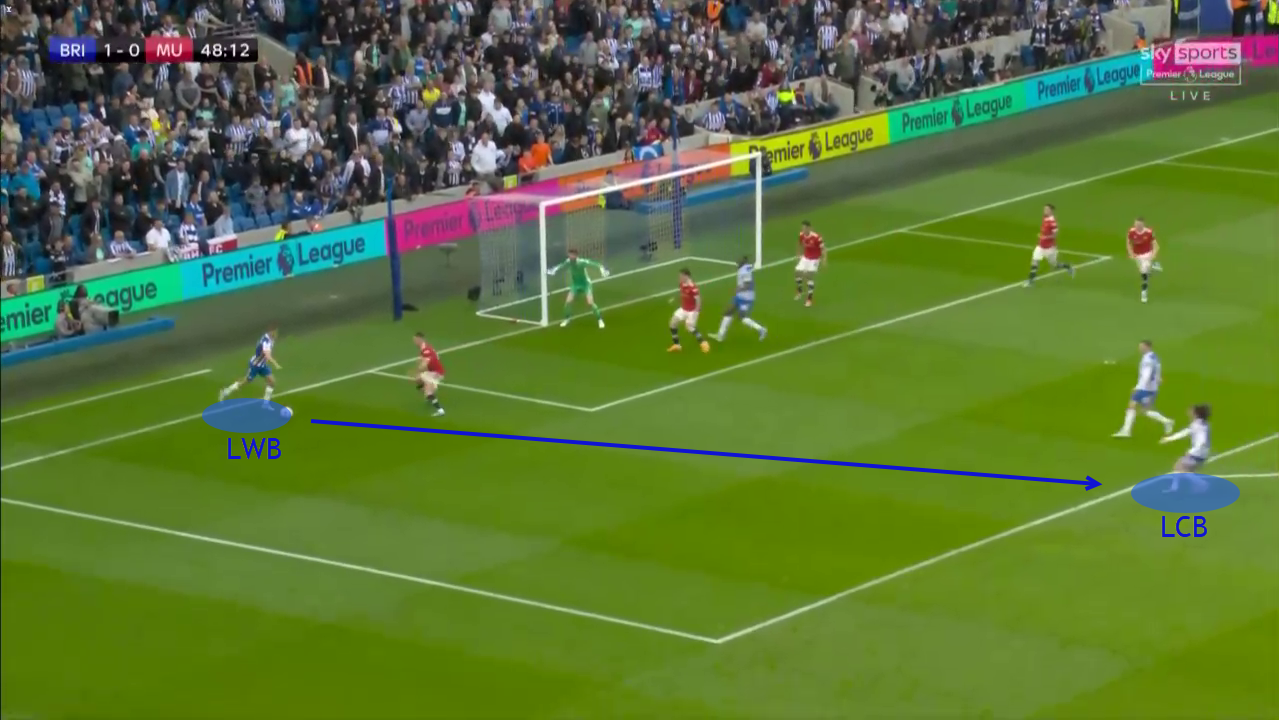 Cucurella developed a great relationship with the leftwing back. This was worked on over the season and proved dangerous as their combination play down the left side drove through opposition defences. If Cucurella can create a strong relationship with fellow teammates, then he can show his worth and become an attacking threat.

Cucurella was used as a left wingback when brought on as a substitute against Everton. However, he could be deployed as a centre-back due to his ball-playing abilities. The injury-prone Chilwell might miss a large number of games this season, which means he may play more as a left-wingback. Either role is more than suited to the Spaniard as his quality in possession will shine through.

Defensively, Cucurella is very solid. Having played a season in the Premier League, he is well settled and used to the pace and physicality of the league’s opposition. Cucurella loves to be aggressive out of possession and trap his opponent with their back to goal. 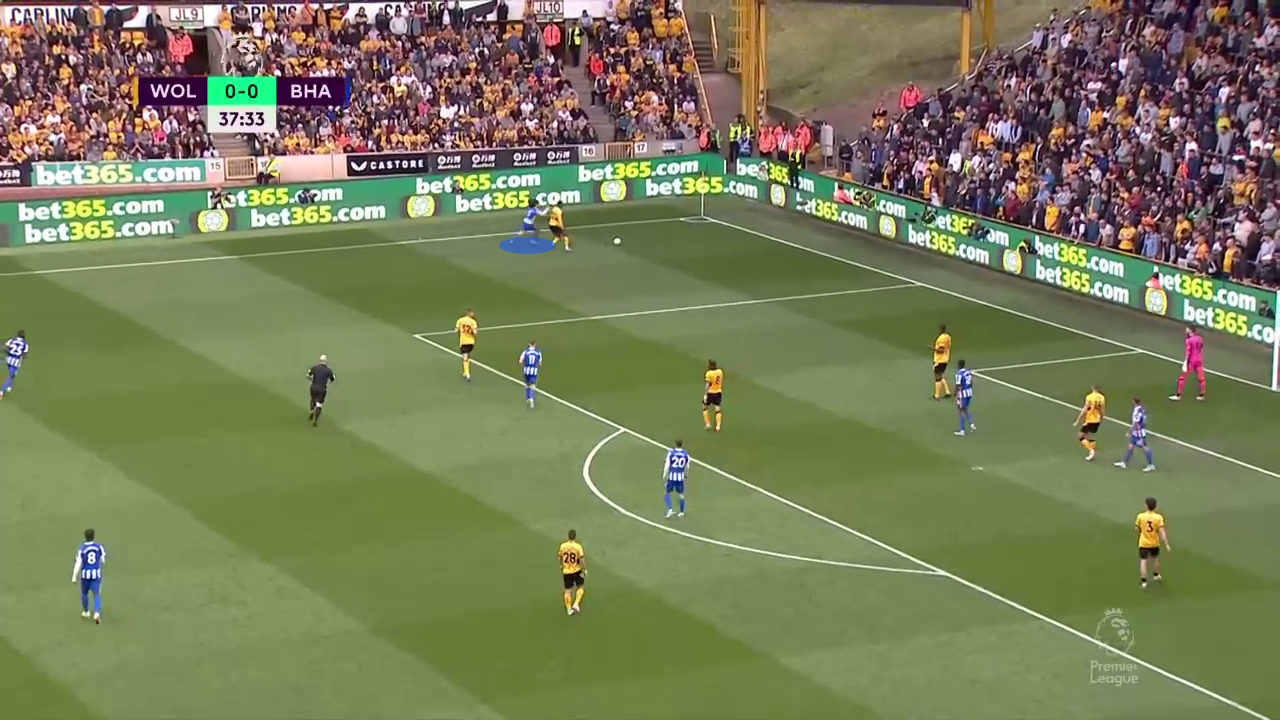 His aggressive nature sees him often win the ball back high up the pitch. He gets his team on the front foot and will fit into Tuchel’s style of play out of possession. His defensive solidity will be utilised by Chelsea as a compact defensive shape is always taken up by Chelsea.

The main feature of Cucurella’s defensive ability is his pace. Playing the way in which Chelsea often leaves them exposed and open at the back. Cucurella is very quick in defensive transitions, something which is important for a team who dominates the ball as one counterattack for the opposing team could result in a goal.

Below is an example of how much ground was made up by Cucurella upon a defensive transition. The chance was cut out and defended due to Cucurella’s recovery speed. 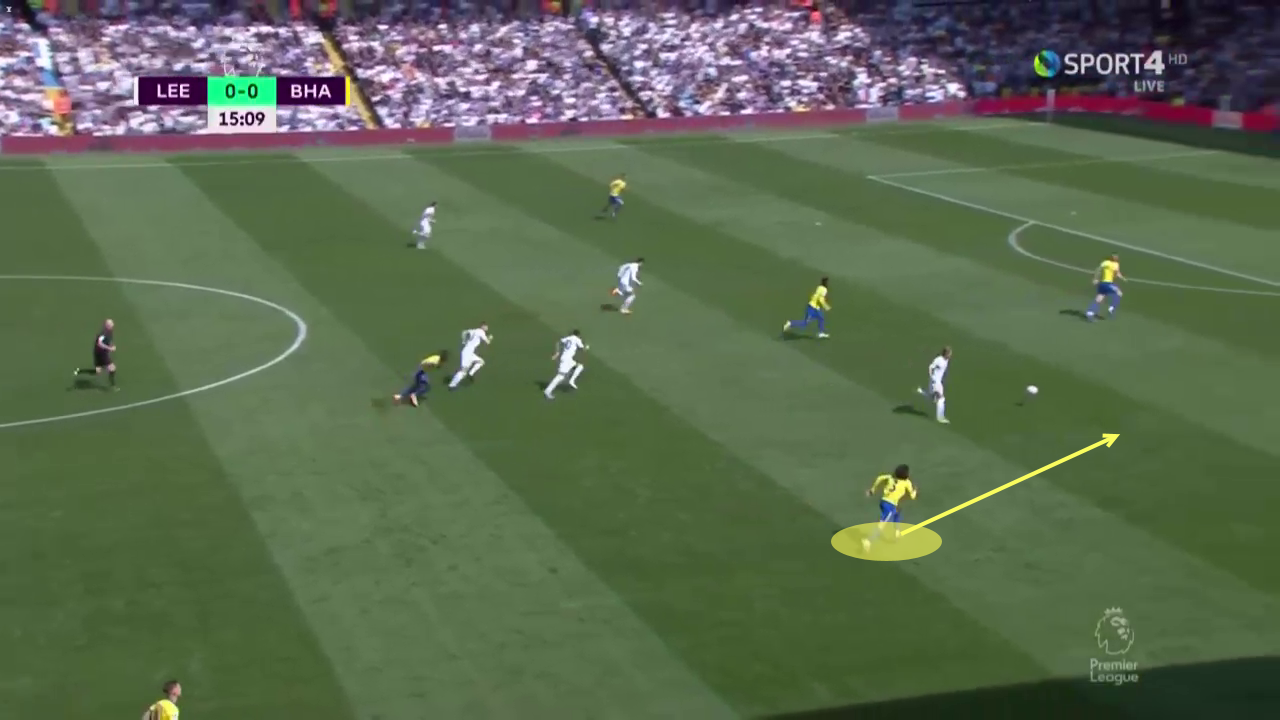 Furthermore, Cucurella is able to excel as a centre-back due to his pace. He uses his pace to cover teammates and help close out difficult situations. Playing Cucurella in a back three allows for his pace to be utilised the most. Defending in a back three often allows Cucurella to be a spare man as the wingback will mark the opposing wide player.

By being the ‘spare’ man Cucurella is able to position himself to cover his teammates. This will be especially important for Chelsea as they play a high defensive line with space in behind. Most likely, Thiago Silva will be part of the three. Silva is 38 years old next month. The Brazillian centre-back is not blessed with the pace he once was, so playing Cucurella alongside him will add defensive security. 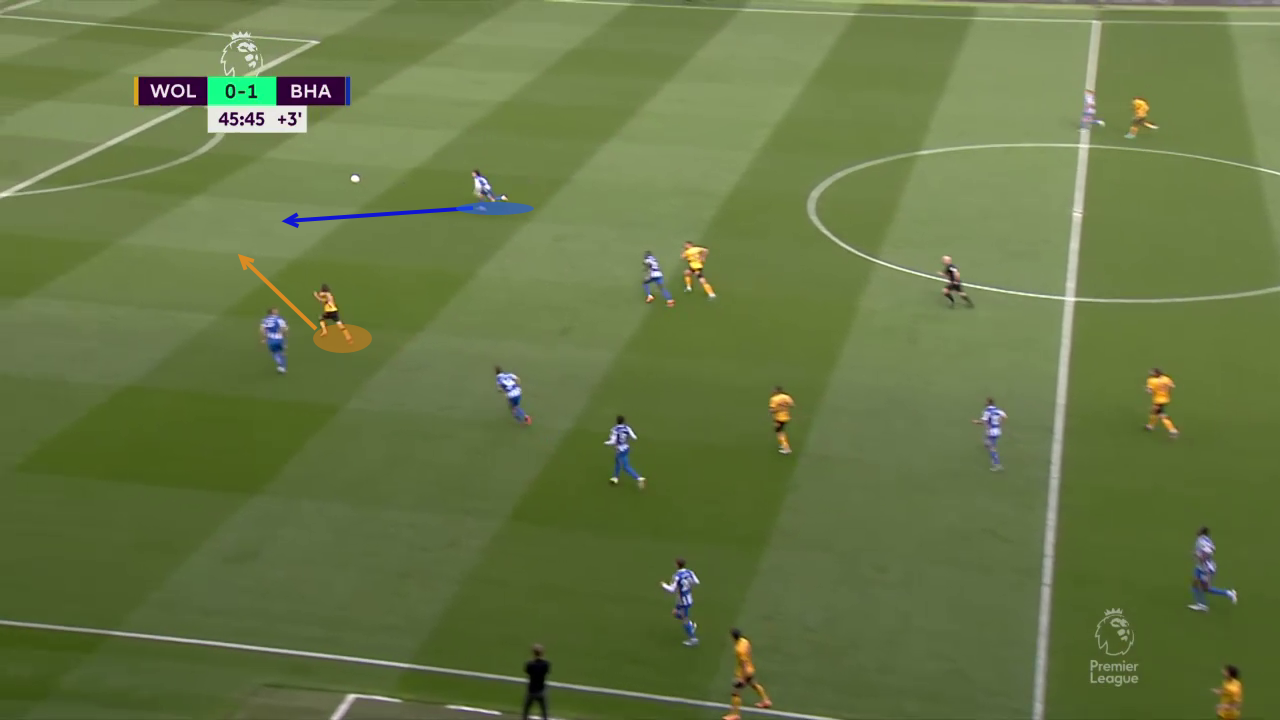 Having played most of his career as a winger or a fullback, Cucurella’s defensive positioning is something which could be worked on. Although he often manages to recover well, this will be exploited against top-quality opposition.

Below is an excellent example of how he positions himself perfectly between the man and the ball in a difficult situation to intercept. Cucurella manages to get his body in the way and stop the cross. 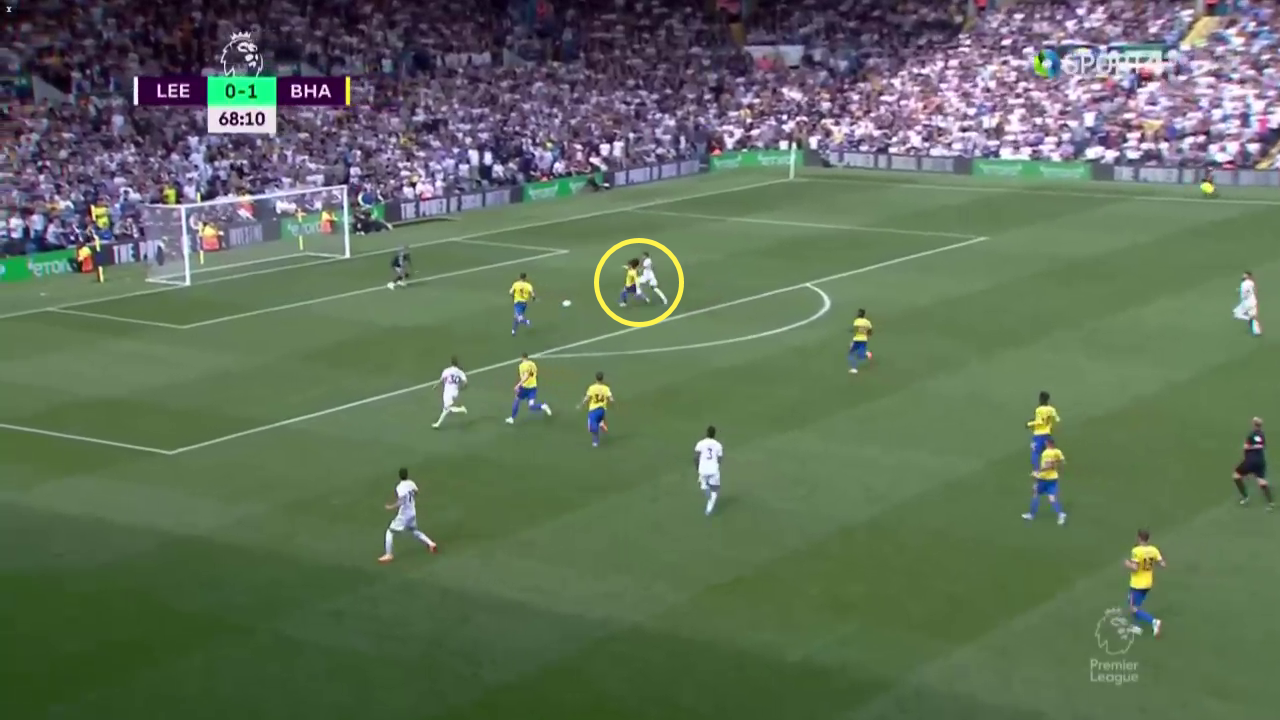 Cucurella’s defensive capabilities may be limited somewhat at centreback. Naturally, he is not an out-and-out defender but more of a modern-day, ball-playing one. Sometimes he can be caught out or unsure of what to do and where to position himself.

As you can see below, he is caught in two minds as to who he should be marking. Once he realises his mistake it is too late and the opposition are in on goal. At the top level, especially in the Champions League, small details like these can cost games. This is definitely something that Tuchel will consider when choosing where to play Cucurella. 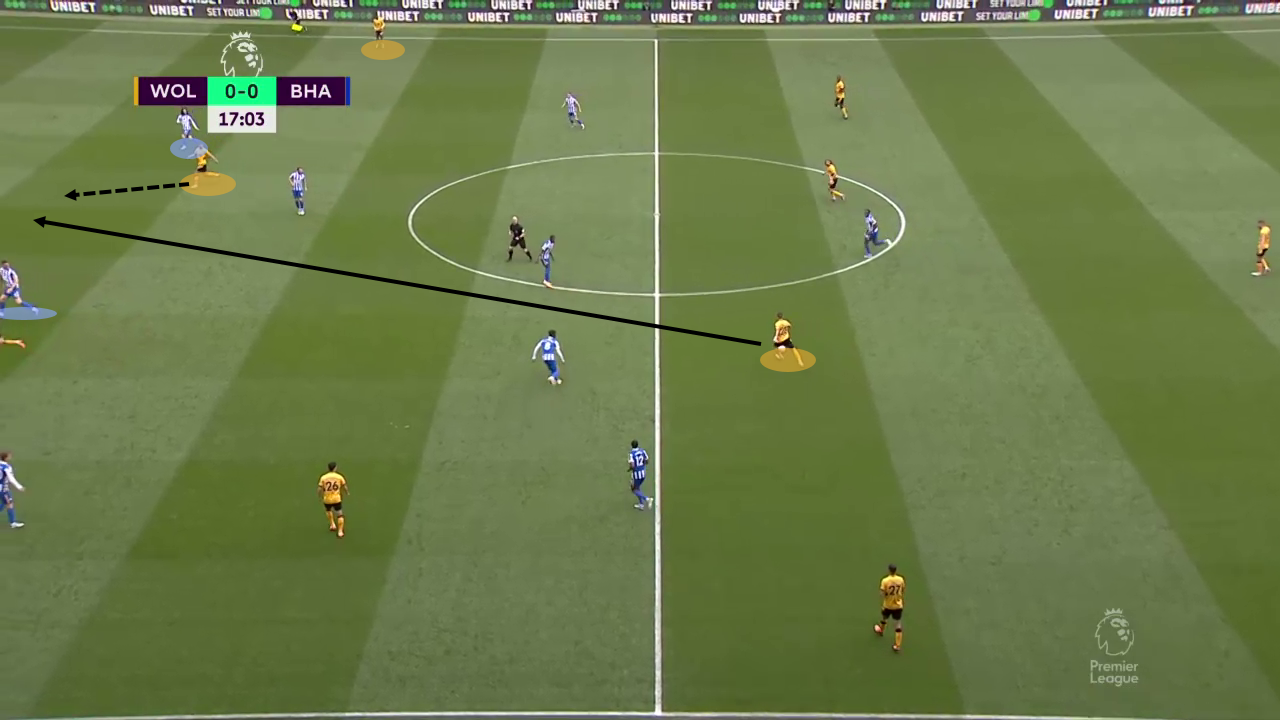 Overall, the signing of Cucurella is a very good one as, ultimately, he will only improve. He brings reliability with over 3,000 minutes played last season, something which Chelsea have, at times, lacked on their left side. Furthermore, it also stopped direct rival Manchester City from signing him.

Positionally, as seen, Cucurella is very adaptable. Something to note is his defensive ability. We predict that Chelsea will use Cucurella as a centre-back in games where they are expected to dominate the ball and break and opposition low block down. In more highly contested games, a more natural centre-back may be preferred by the Chelsea boss.