Mads Emil Madsen is one of the most interesting signings in the Austrian Bundesliga in this summer transfer window as he joined LASK Linz from the Dane club Silkeborg IF. The 22-year-old has been with the club from an early age, making his debut for the senior team and therefore the move to LASK Linz is the first transfer of his career.

At the time of releasing this tactical analysis in the form of a scout report, LASK Linz played two competitive games to kick off the 2020/21 campaign. The first one was in the ÖFB Cup in which the young Dane got subbed on to play 13 minutes while he sat for 90 minutes on the bench during the opening matchday of the Austria Bundesliga.

In this analysis, we will look at the qualities of the 22-year-old central midfielder and check how he will fit into the tactics of LASK Linz.

Since Oliver Glasner took over LASK back in 2015 their preferred system is to play with a 3-4-3 formation and show direct and vertical football. This hasn’t changed under the coach of the last season Valérien Ismaël and also the newly appointed head coach Dominik Thalhammer stick to the same philosophy.

Out of possession, LASK Linz prefer to operate with a high and man-orientated press. We can see that one of the central midfielders tends to join the three forwards during the press while the other one stays slightly deeper to give them some protection. To simplify, the more advanced central midfielder mostly looks after the opposition’s defensive midfielder while the deeper one tries to occupy the important space behind the players who execute the press and meanwhile marks the opposition’s No. 10.

In recent seasons, Peter Michorl and James Holland were the two preferred players for these positions and one of the best midfield pairings in the Austrian Bundesliga. Michorl is the more creative one who more likely joins the forwards during the press while Holland is defensively stronger. Even though they got eliminated from the UEFA Europa League in the recent season by EPL giants Manchester United, they showed throughout the campaign in this international competition that they are an incredibly solid midfield pairing and they perfectly fit into the tactics.

Bundesliga side Werder Bremen were interested in signing Michorl, but LASK were able to keep hold of him and they signed with Lukas Grgić and Madsen, two additional central midfielders.

In this second part of this tactical analysis, we examine in which areas of the pitch the Danish midfielder performs his actions regularly. The 22-year-old is a player who loves to have the ball at his feet and tries to help defenders during build-up. As we will see in the other parts of the scout report, he is technically gifted and is the ideal player to organise the progression of the ball.

In the heatmap below for all his appearances in the highest Dane division during the 2019/20 season for Silkeborg IF it stands out that he is mainly positioned in the centre of the pitch as I already mentioned. Also, he doesn’t just stay deep, but also moves further up the pitch as the attacks of his team progress. Furthermore, we can see that he is slightly more often in the right half-space, but still can be found quite frequently in the centre or the left half-space. As we will see in the next chapter of the tactical analysis, the young Dane has a great vision to detect runs of his teammates quite quickly and then find them with decent passes. To give himself more time and space on the ball, Madsen often drops quite deep to collect the ball from the defenders. By doing so, he positions himself out of the block of the opposition and creates some distance between him and the opponents. That means that he can get on the ball, move with it a few yards forward to have an open body positioning and see the whole game in front of him.

In these situations, he reminds me a bit of Thiago who has been a key player for Bayern Munich in this role and helped them win the recent edition of the UEFA Champions League. However, we can see in the image below an example in which Madsen comes deep to receive the ball from his defenders and separated himself from the opponents to have space and dribble forwards for a few yards. 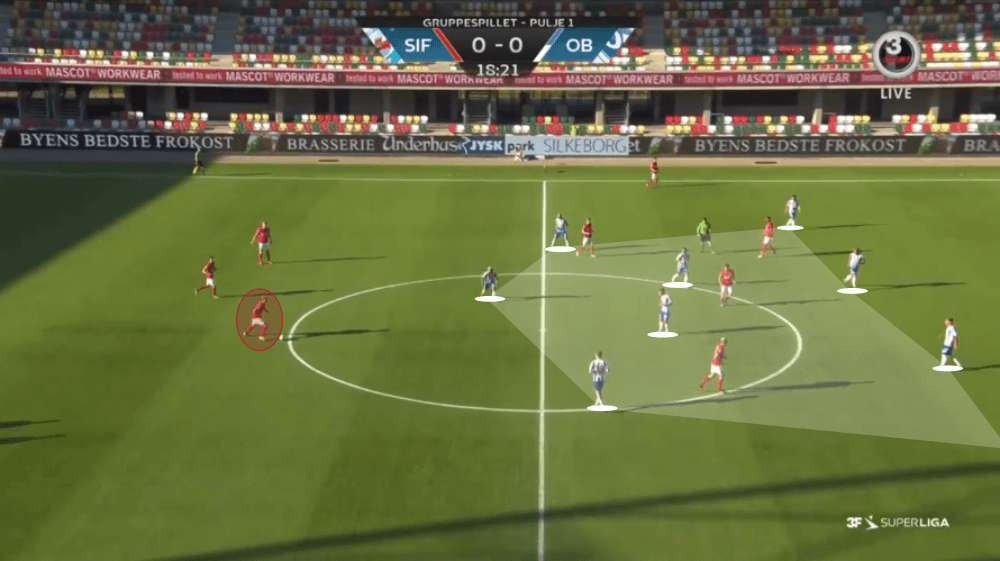 As already mentioned earlier in this tactical analysis, Madsen played for LASK Linz this far in only one competitive match as he got subbed on in their opening ÖFB Cup fixture. Still, we saw in his short time on the pitch already what type of player he is and what role he will have at Linz.

He stayed during the possession phase quite deep to give the three defenders always at least one passing option in the centre. He did quite well to move in the area in front of the back three to get on the ball and organise the build-up. This will be the way Thalhammer wants to use him in his 3-4-3 formation. 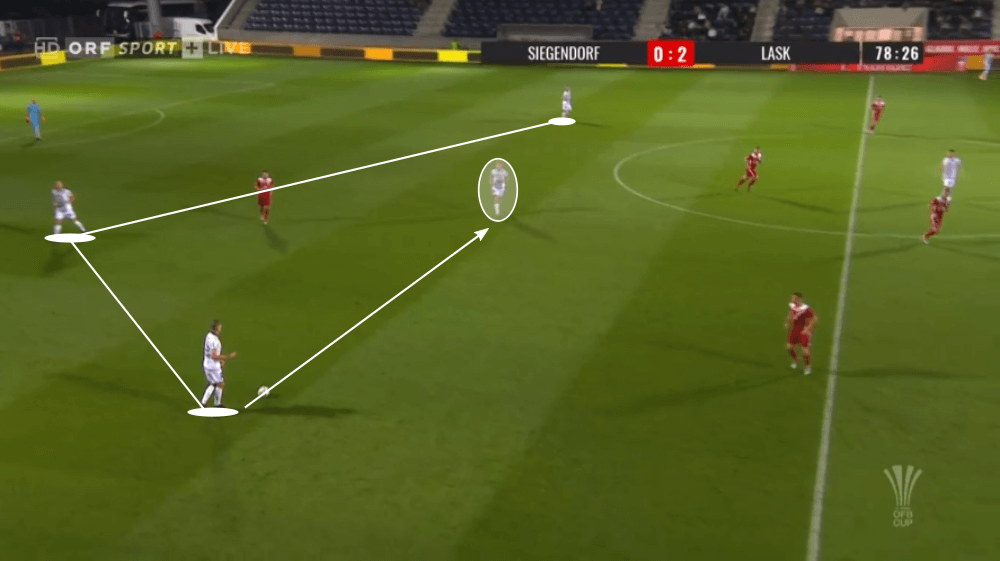 In this part of the scout report, we will look at his ball-playing abilities. Basically, the young Dane has great technical abilities paired with a great vision. These are also the reasons why he wants to get that often on the ball as he knows that he has the qualities to find a solution for almost every situation. Even under pressure he stays calm and always tries to scan the pitch ahead of receiving the ball to look for the best passing option.

Without checking the pitch before receiving the ball, Madsen would not be able to find solutions like in the example below as he receives a pass and instantly gets pressed by the opponent from behind. However, Madsen stays calm, needs one touch to control the ball and brings it with this first contact into the position to switch play with his stronger left foot. 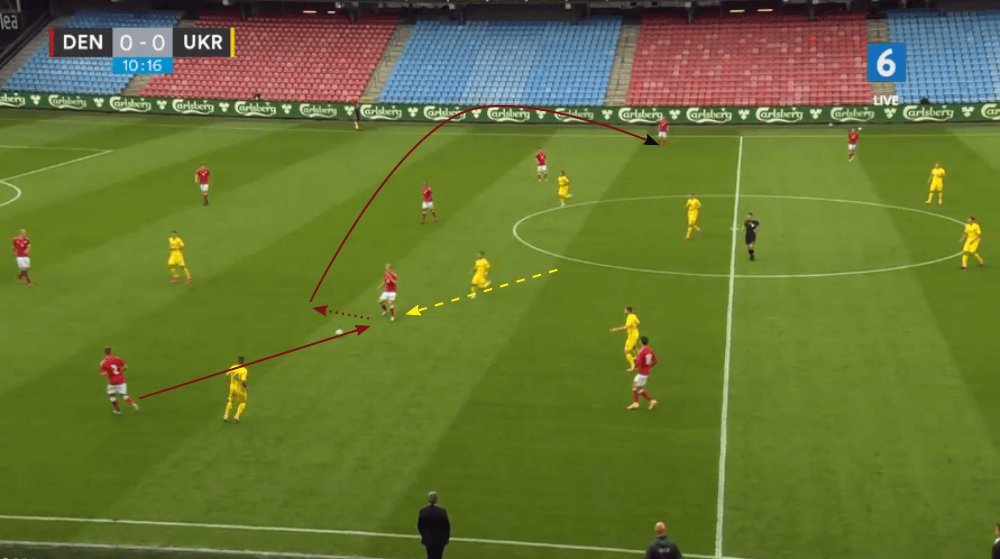 This example above shows us two things. Firstly, that he has decent vision and understanding of the game but more importantly, you can force him to play lateral passes as long as you put pressure on him. However, as soon as he gets more freedom, time and space, he can exploit his technical and mental qualities even more.

The following action was taken just a few seconds after the example in the prior section which I used to show an example in which he came deeper to collect the ball and create distance between him and the opponents. After doing so, he dribbled forward until he got in the situation below to then play a decent through pass as he received almost no pressure. 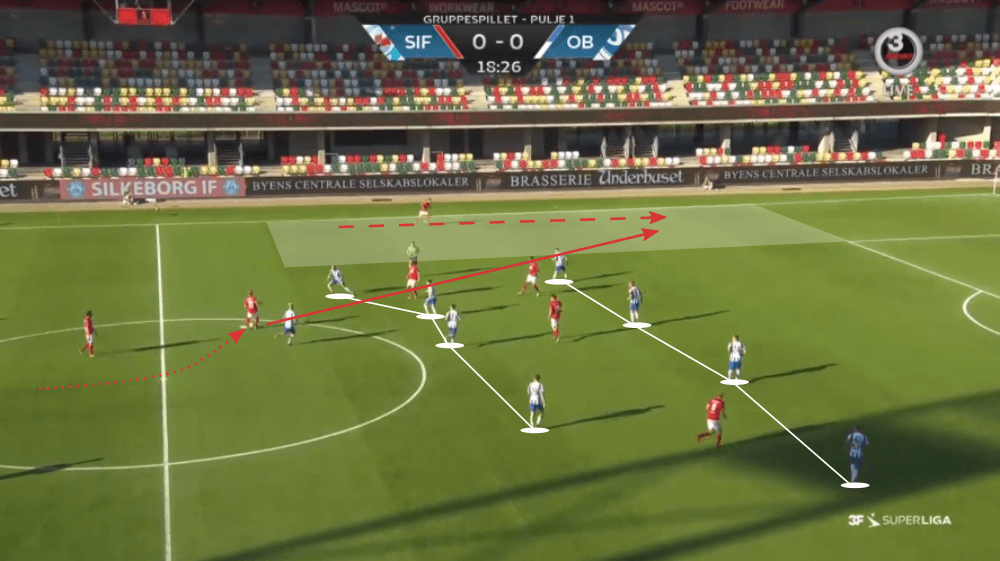 A perfect example is the situation below as the winger makes a decent run and Madsen is in the centre with a lot of space. He has the ball in the position to execute it with his right foot and then plays a decent through pass with his weak foot. This shows that he has the technical abilities to play such great passes with his right foot too. 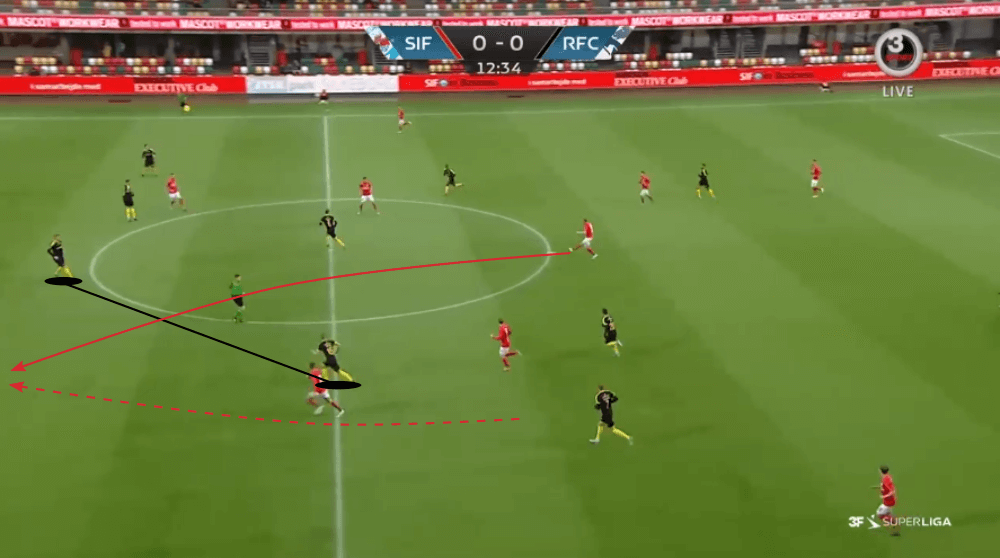 Interestingly, Madsen prefers to dribble with the ball in deeper areas to get a few yards forward with the ball or release the pressure as we already saw in this tactical analysis. However, the Dane is clearly a player who loves to take on opponents in one-on-one situations as he prefers to pass the ball.

Especially when he enters the final third, he likes to find his teammates with passes instead of dribbling with the ball at his feet. In those areas of the pitch, he tries to not stay on the ball for too long. An example can be seen in the ÖFB Cup fixture of LASK Linz as he received the ball and needed one touch to control the ball and then instantly played the pass to Raguž. 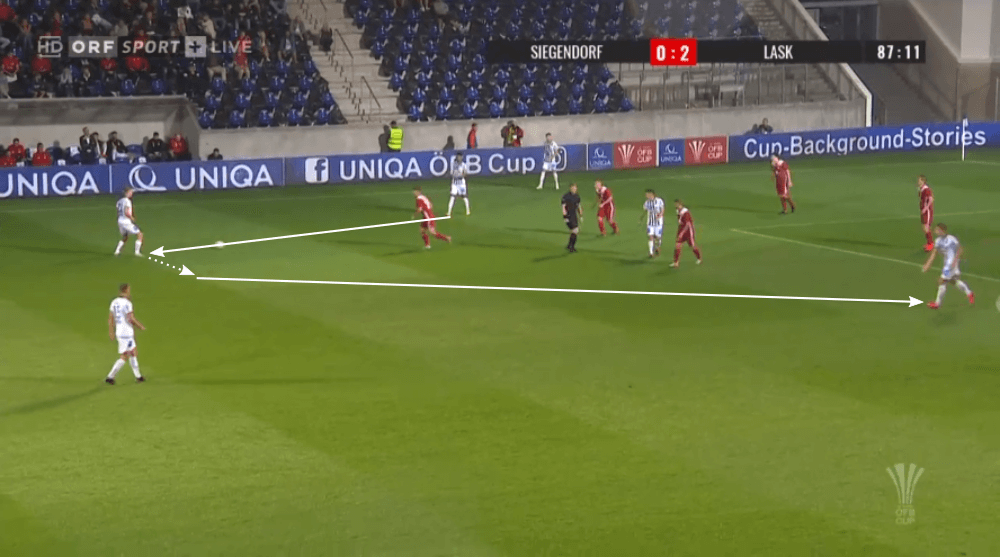 Aggression and understanding of the game

Without any doubt, the 22-year-old Dane has the qualities to be a key player for the progression of the ball in the squad of LASK. Of course, Michorl is still on another level as he is one of the best central midfielders in the Austrian Bundesliga, but Madsen has shown great talent.

However, to be a regular starter in the central midfield of LASK Linz you need besides ball-playing and mental abilities a great ethic as well as defensive abilities. Last season, Madsen averaged 8.16 defensive duels per 90 what is a decent value, but the fact that he won only 53.7% of them show that he is not that strong in defensive duels yet.

These numbers show us that he has the necessary aggression and is ready to challenge opponents but still has to work on his behaviour in defensive duels. He made on average 3.17 interceptions per 90 as this is one of his strengths when we look at his defensive game. His understanding of the game and ability to read the game help him to do so. 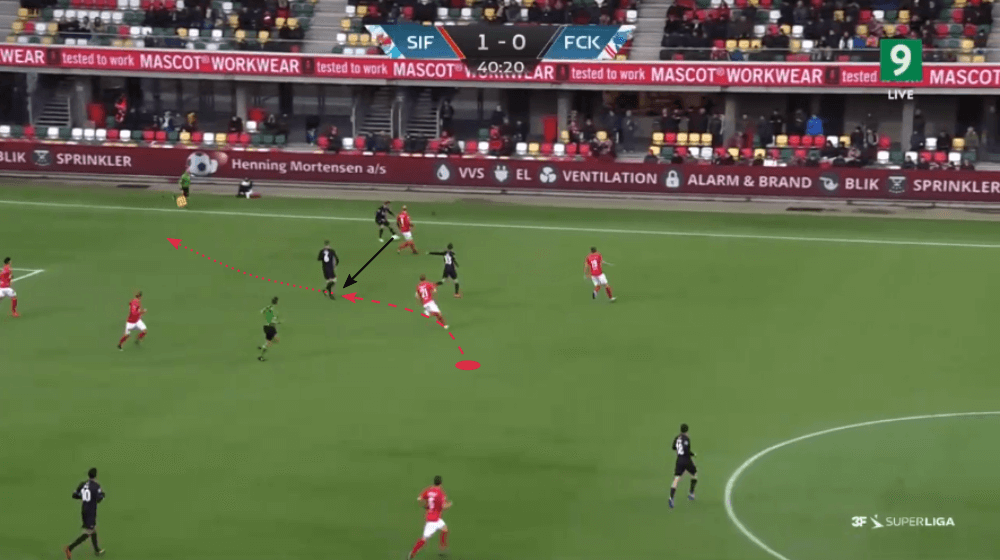 In his first competitive match for LASK Linz, he showed that he is ready to play in LASK Linz’s intense system and showed some good moments during the counter-pressing phase. Even though not all of them were successful, we saw that his aggression and understanding of the game would help him very much to fit into the tactics. In the example below, his team lost the ball high up the pitch and he instantly joins his team to start counter-pressing. Even though he makes a foul in this situation, it shows that he has already adapted to the tactics of his new team. 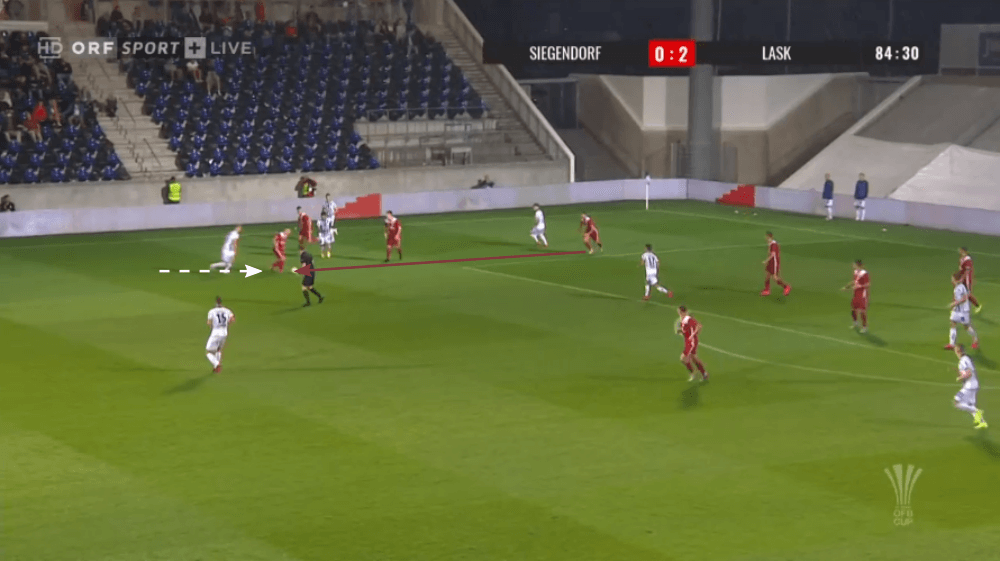 Madsen has everything that a central midfielder needs to play for LASK Linz, including ball-playing abilities, understanding of the game, agility, aggression, and determination. I expect him to be backup for Michorl this season and probably take over his role when the Austrian decides to leave the club at the end of the season.

Either way, they will have to give Madsen enough time on the pitch so he can develop his skills this season. Without a doubt, he has the potential to become a key player for Linz.