Borussia Dortmund’s attack has caught the eye of international football as of late given that they have two of the best young attackers in the world in Jadon Sancho and Erling Braut Haaland. However, before the arrival of Haaland, it was Sancho and Dortmund’s captain Marco Reus who had the limelight. The latter has had an underrated season as he has contributed to an incredible goal every 94 minutes in the Bundesliga but injuries once again curtailed a fantastic first half of the season as he missed the last 14 games due to a muscle injury.

The German international has been an integral member of Lucien Favre’s side and this tactical analysis will look at his skill set and impact on Dortmund’s attack when he has featured.

One of Reus’ best attributes has always been his ability to get into goalscoring positions and score from them. He has managed to score a great tally of 11 goals in 1502 minutes, which equates to a goal every 137 minutes, which is a prolific return in the context of Reus’ role. Reus has never been the one to be in a position to have an elite level of chances at a very high rate given that he often played as an attacking midfielder or out wide and was also Dortmund’s source of creativity for a lot of years. The same rings true this season and this can be seen by his expected goals. His xG per game was 0.54, which was enough to be ranked 13th in the Bundesliga out of players who played a minimum of 1000 minutes. While this number is not at an elite level, for reference Erling Haaland has 0.75 xG per 90, it is still a great number given his position as an attacking midfielder.

In terms of other statistical numbers for finishing and scoring that we can look at, Reus does pretty well. He averages around 2.81 shots per game per Understat, which is a slight improvement from the season prior but since he is 31, this number won’t increase much higher than this in upcoming seasons, and hasn’t done so for the last couple of seasons too. His conversion rate is fantastic as he scores 23% of his shots that he takes, which is well above average, but it should be noted that conversion rates aren’t a great predictor of future scoring. It does provide some context on his finishing quality this season though, and the quality of finishing can be backed by his expected goals compared to the goals he scored. As mentioned before, he scored 11 but on 9.1 xG, which means that Reus is outperforming xG 1.21 times, a value that can be deemed as sustainable. 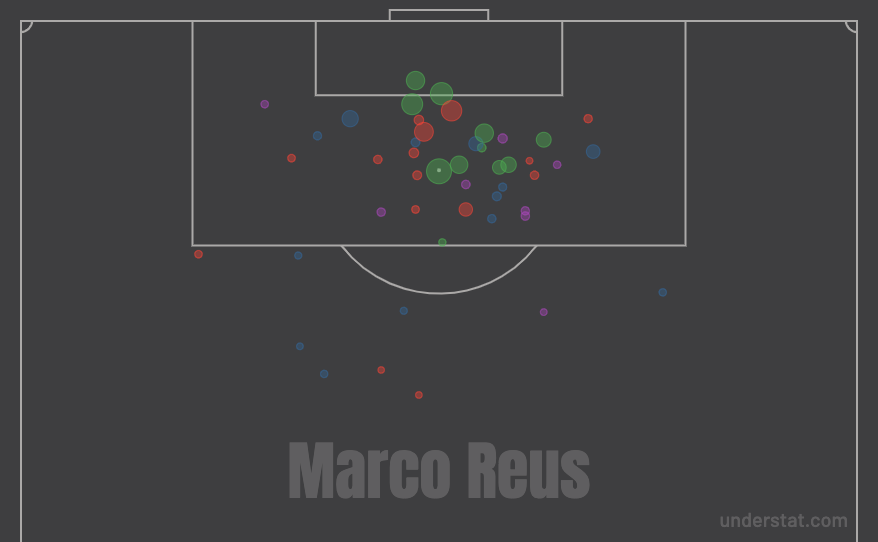 Looking at his shot map, it comes as little surprise how he manages to get good quality chances. Reus picks up great shot locations with most of his shots being inside the box and centrally. This is a key reason for his goal tally this campaign given that the closer to the goal, the higher the chance of scoring. It also illustrates that he does not shoot from a specific area in the box, which shines a light on his versatility as an attacker but his confidence on both feet, something that makes him so difficult to stop. The shots outside of the box are mostly free-kicks but his shot technique is fantastic, which is how more than half of his shots from range at least hit the target.

Given that Reus was a winger earlier in his career, he was often asked to create chances for his teammates. As he became older and moved to a more central position, he continued to carry on this burden for Dortmund. The German international would have been regarded as one of the best attackers in the world had he not been injured consistently as he was able to have incredible output not only in scoring but creating too. 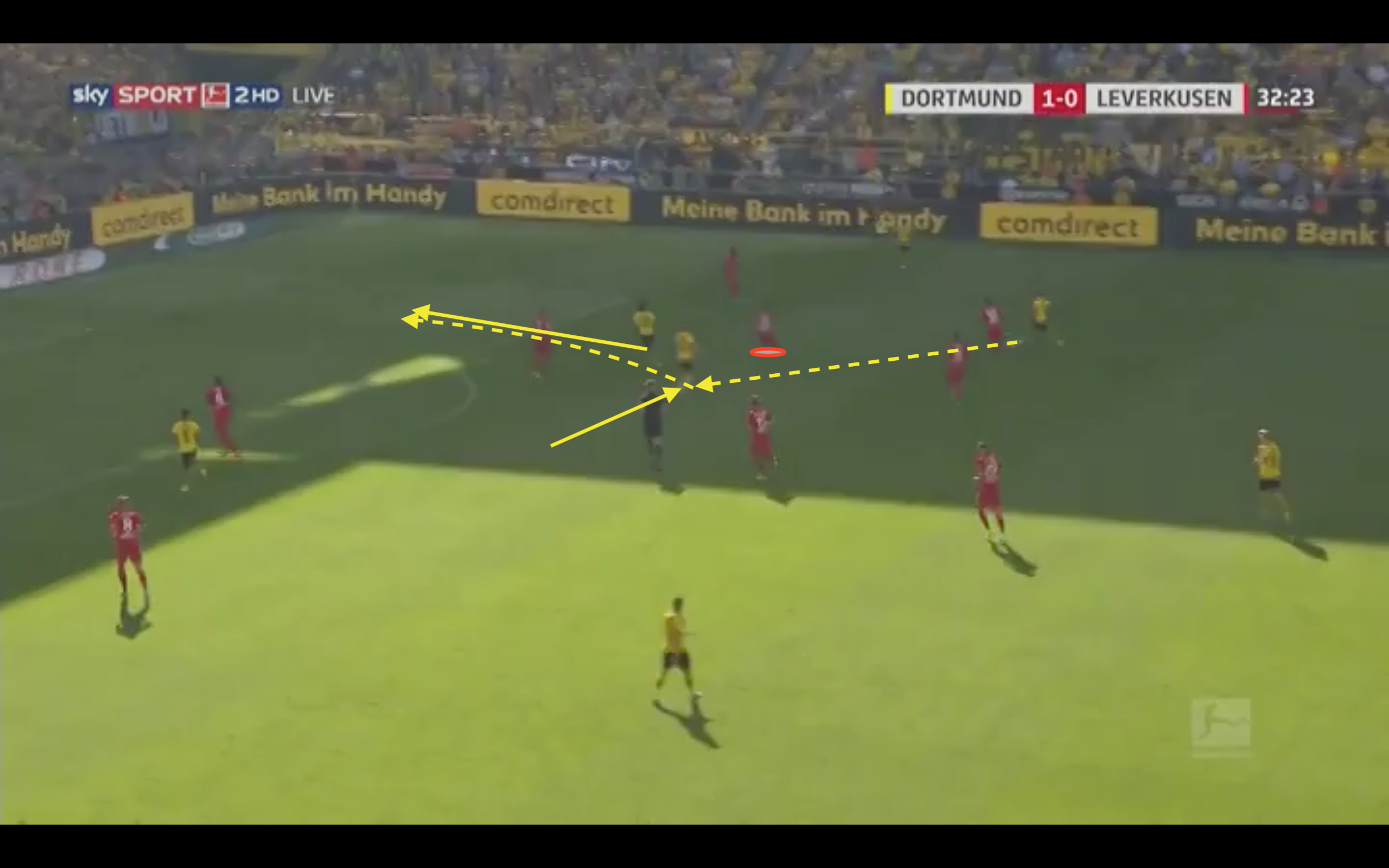 Witsel and Reus cleverly switch places with Witsel making the run in behind, which forces the defender to match up to him. With Reus now open, he sneaks up behind the midfielder, who is unaware of his presence and has a pocket of space to work with. His position makes him an easy passing option and the pass is played to him before Reus plays a first time pass into Witsel. This leads to a high-quality chance that cannons off the crossbar.

Reus was often deployed as the lone forward in Lucien Favre’s system and it was a great move as it made the team much more fluid and the attacking tactics seemed to fit for the talent at the club. Despite being deployed centrally, he likes to drift away from his position and operates very well in the half-spaces. This example against Fortuna Düsseldorf shows this well. 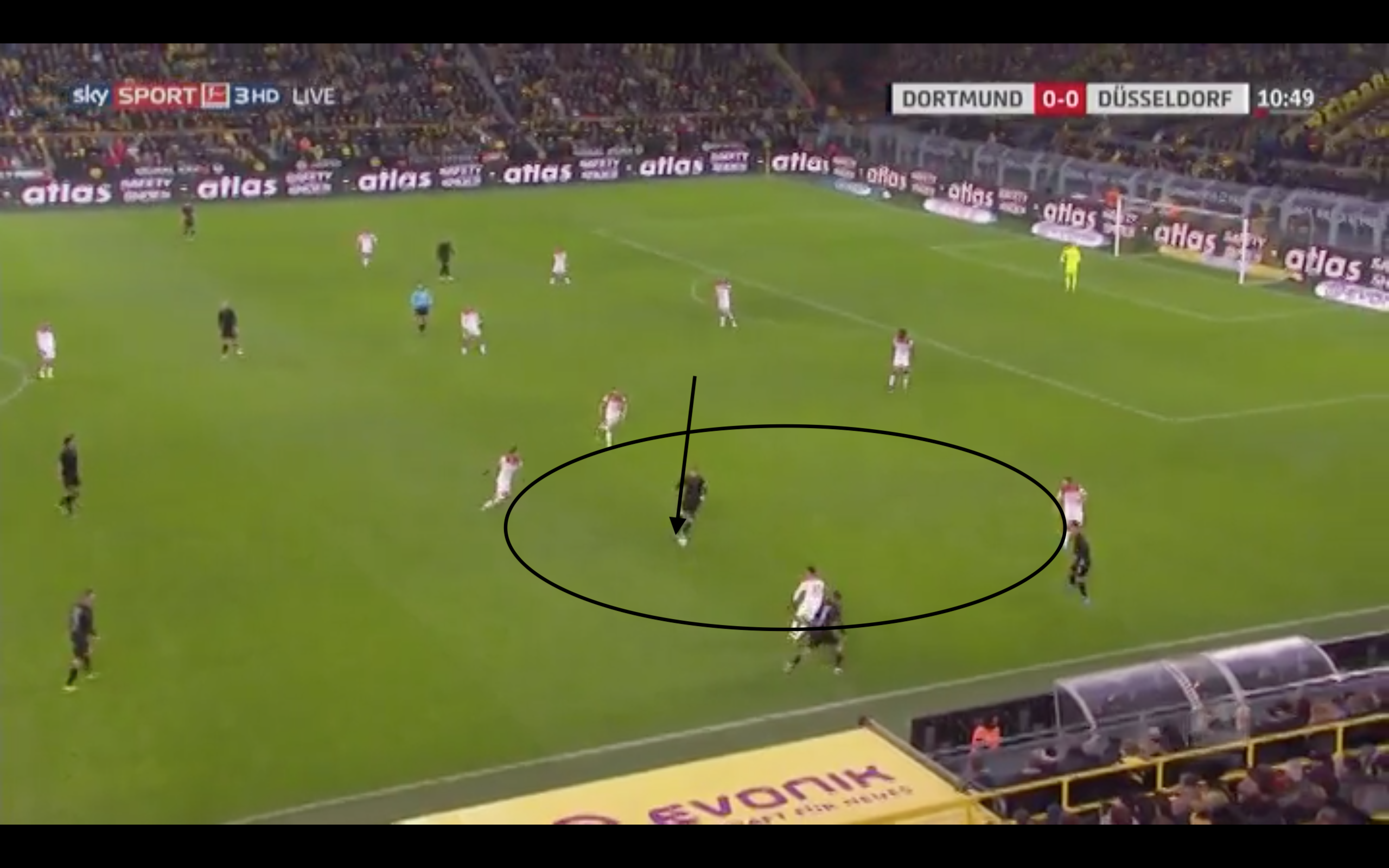 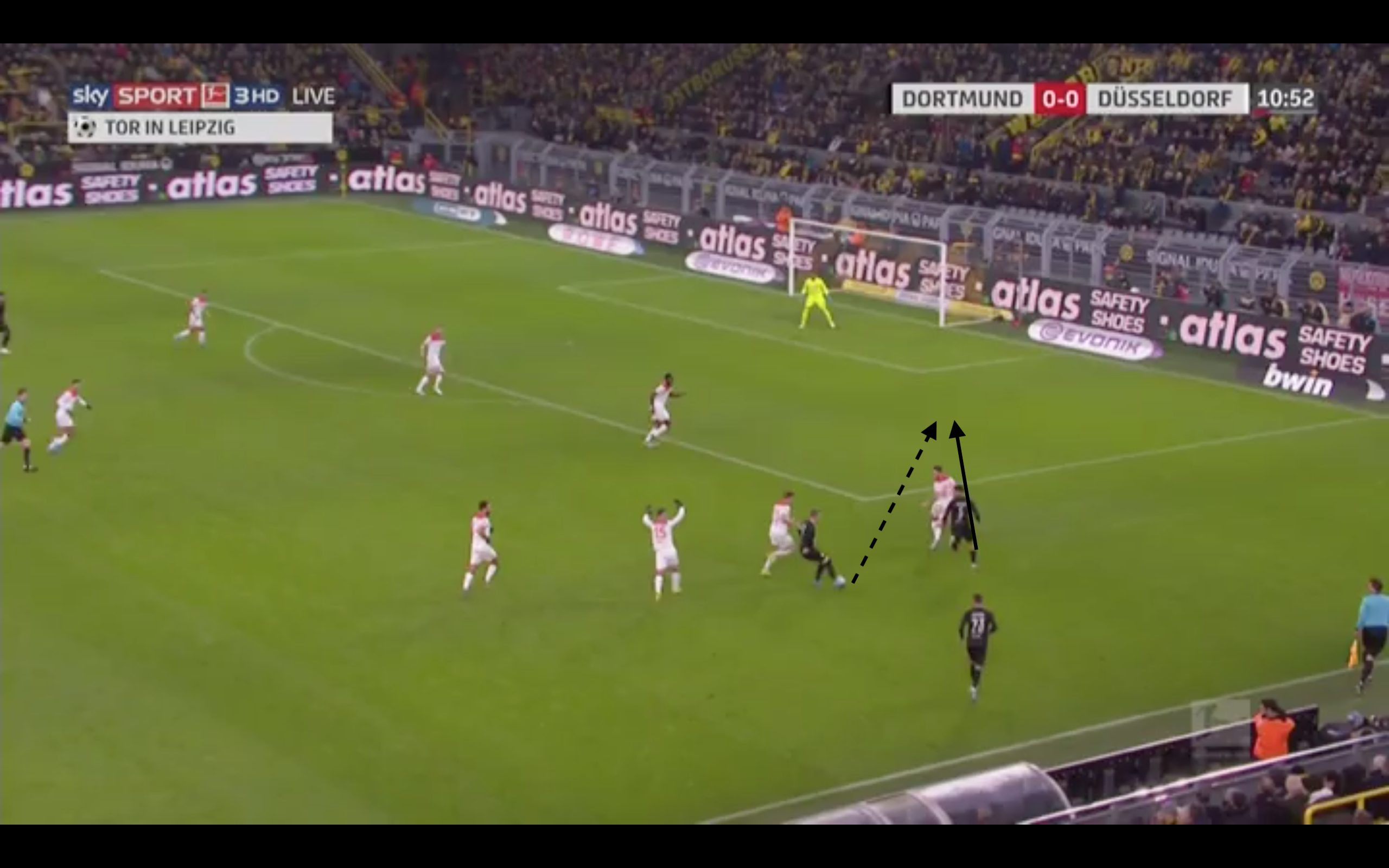 The first image is just as Reus receives the ball with the second being the final action that Reus does in the play. Reus drops from his center-forward position and picks up the ball in a huge amount of space in the right half-space. He uses his great dribbling skill to drive past two opposition players before attempting to find Achraf Hakimi who is making the run in behind, as shown in the second image. The pass is weighted well and Hakimi is able to win a corner out of it.

Reus’ positioning and passing ability help create opportunities for his teammates and his work in the half-space is one of his best ways of doing this. Given his excellent ball control, another way he is able to be creative is by playing short, intricate one-touch passes between his teammates especially on the edge of the box as this is very hard to defend.

As a forward, it is imperative to be great at moving off the ball and Reus is still great at this. Despite all the injury struggles he has had, Reus has still got good speed and acceleration, which makes him a great threat on counter-attacks, a common way in which Dortmund attack, given how high most Bundesliga teams play nowadays. The 31-year-old also has an innate sense of where to be at what time and this makes him such a hard player to mark.

Here, we get to see an example of his runs in behind the defense. This is not a counter-attacking situation but Leverkusen’s line is high enough and Reus is great at staying on the last man before moving when the pass is released. 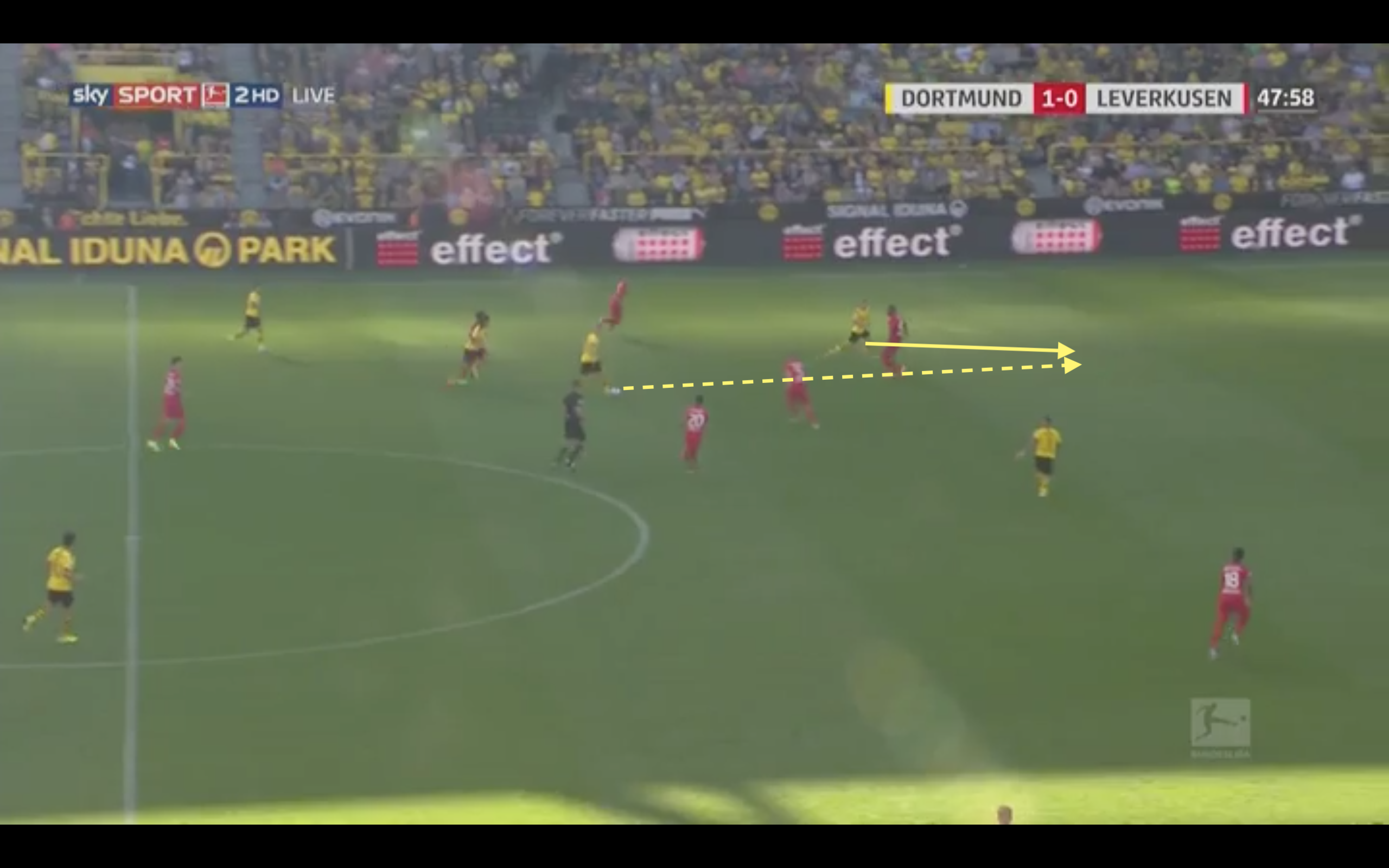 This is a very simple action where Brandt has the ball and Reus is on the offside line with Jonathan Tah. In this scenario, Brandt is unable to find the pass to Reus, who likely would have beaten Tah for pace and gone through on goal. To look at the German’s ability to stretch the pitch in this way, looking at offsides per game is a good indicator of his talent in this department. He only averaged 0.5 offsides per game in the Bundesliga, which for a forward is pretty good and thus highlights his effectiveness in making runs in behind on the last man.

In the same game, he plays as an attacking midfielder, and this example below showcases a run that Reus uses very often in his game when playing in this position. 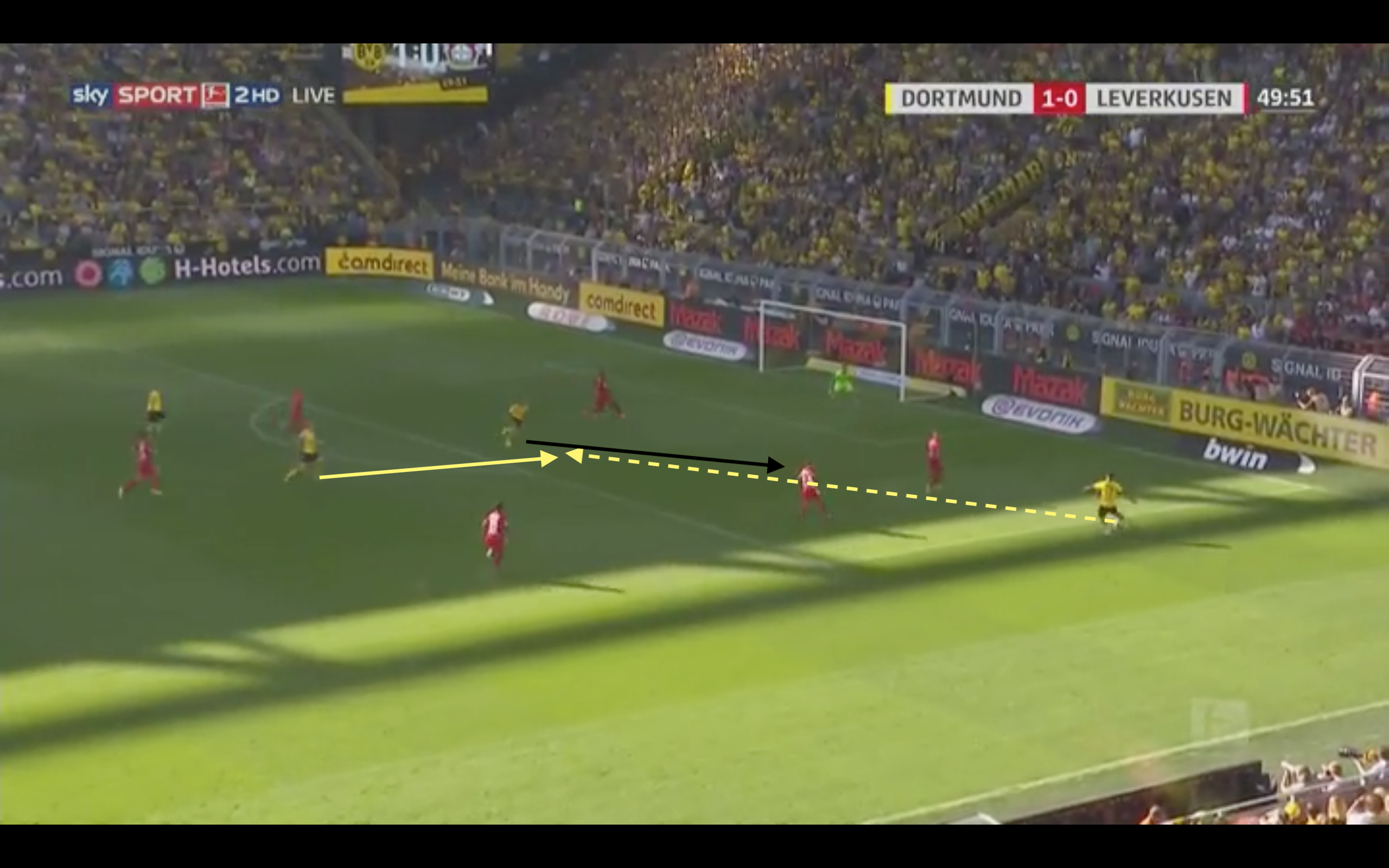 Most teams usually have their attacking midfielder in the box for crossing situations but Reus is a player that likes to arrive late in the box for a cutback. While this example isn’t perfect as this is on a counter-attack, it shows the principle of why it works. Paco Alcacer, the player making the run in black, is running towards the cutback from Sancho. This draws the attention of every defender in the box onto Alcacer, which then allows for Reus to come in late with virtually no one around him. The ball is played into the box and Alcacer brilliantly dummies the ball for Reus, who has an easy finish that he converts. If Reus played in Alcacer’s role as a lone striker, he would normally look to run into the near post so he switches it up depending on what role he is playing in.

Hopefully, this scout report showcased the talent of Marco Reus who, at 31, is passed his prime but still has so much more to offer for this Dortmund side. He has a complete skillset for a forward and can play across the front four positions. The only issue for him is his availability, which is likely to be out of his control.

With Sancho looking more likely to stay as the days continue to pass, Favre will have the option of featuring Reus, Sancho, and Haaland regularly, with players such as Hazard and Brandt options as well. This kind of attacking talent should be enough for Dortmund to challenge Bayern Munich for the title but if they do, it will most likely be led by their talisman Marco Reus. 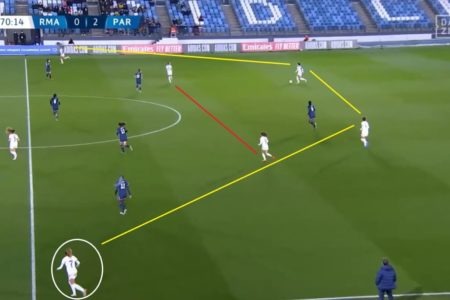 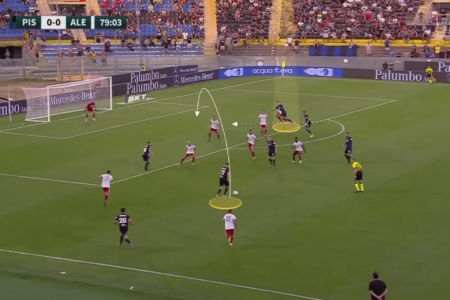