Luis Diaz (1.8m & 73Kg) has been mightily impressive this season for FC Porto and has attracted a lot of attention from some of Europe’s biggest clubs. Diaz 24 is now into his 3rd season with FC Porto, and this is by far his most impressive. Diaz started his career in his native Colombia with Barranquilla with only a handful of senior performances he moved to Atletico Junior, after attracting attention in Colombia Diaz made the move to Europe in the summer of 2019. Diaz has grown and developed while at Porto and we are now starting to see him flourish which has attracted a lot of attention with Chelsea, Everton and Newcastle all being rumoured to have shown an interest in acquiring Diaz.  According to Marca, Newcastle is ready to pay 80 million Euros release clause in his contract for his services in the upcoming transfer window. This season has been Diaz’s best with him scoring 6 goals in the league, this is the total he managed all of the previous two seasons as well as putting in some impressive performances in both the Champions League and the Primeira Liga.

This scout report will look to unpick and analyze some of the key features in Diaz’s game and how they have caused some of his impressive performances this season.

Diaz is almost always deployed on the left-hand side for both Porto and Colombia despite being a right-footed player. As you can see From Diaz’s heat map below, he spends all his time on the left. Diaz is a great example of an inverted winger, a modern approach where wingers will play on the side of their weaker foot although this may sound disadvantageous it can if applied properly by very advantageous as it can provide more attacking options.  When on the left he also likes to stay wide and keep his width, the darker shades of the heatmap being close to the touchline on the left-hand side rather than drifting infield which can sometimes be the case with an inverted winger. While playing on the left it allows Diaz to cut inside onto his favoured right foot but also creates room for overlapping fullbacks to get around him. 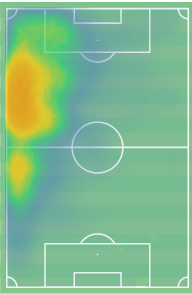 When watching Luis Diaz, you can’t help but notice his excellent dribbling ability, he has great control of the ball has the ability to take it away from defenders in an instant. As already mentioned within the positioning part of this report, Diaz loves to cut in onto his right foot. This is a key feature to lots of inverted wingers however Diaz is one of the best at doing so. As Diaz is such a dangerous dribbler, opposition fullbacks like to give him space as if they get too tight it can lead to them committing fouls and getting beat with more ease. By giving him space it allows him to shift the ball onto his right foot and this often leads to goals. The below example comes from Porto vs Sporting earlier in the season, Porto has worked the ball to the left and created this 1 v 1 situation below.

Diaz is in a 1 v 1 with the right-back, the important aspect of this here is Diaz’s first touch. He has two options and although the right-back probably knows that Diaz want to come inside his first touch takes him left which then allows him to shit it back onto his right.

You can see here that Diaz’s first touch takes him to his left which one commits the defender but also gives him two options. He can go left and use his pace to try and beat him or cut back inside as the defender has squared himself off.

He then goes infield and gets a great shot off which flies into the bottom corner netting and an important equalizer for Porto. On this occasion, Diaz comes in on his right foot and curls a beautiful strike into the bottom corner. What makes Diaz so dangerous is that he can go both ways and still produce quality. This is imperative as he progresses more teams will look to cut out the inside as an option and force him to go down the left.

In the next example, Diaz picks the ball up a bit deeper than the previous example. However, he still has two options he can look to cut inside or go down the left.

Diaz uses his speed on this occasion and accelerates past the right-back rather than cutting inside and finds himself in another 1 v 1 situation this time his life is made easier with the defender committing to going to the ground quickly meaning going again to his left is an easier option.

Diaz now finds himself in a great opportunity, deep in Sporting’s area however he tries cutting inside may be showing too much of a reliance on his right foot when an easier option was available.

Below is a graph showing dribbles per 90 against dribble success rate and it shows us that Diaz is a less successful dribbler than first anticipated with a success rate of close to 45% which when compared to the other top dribbler’s in the league is significantly lower. This is something Diaz may look to improve on if he wants to continue to improve. 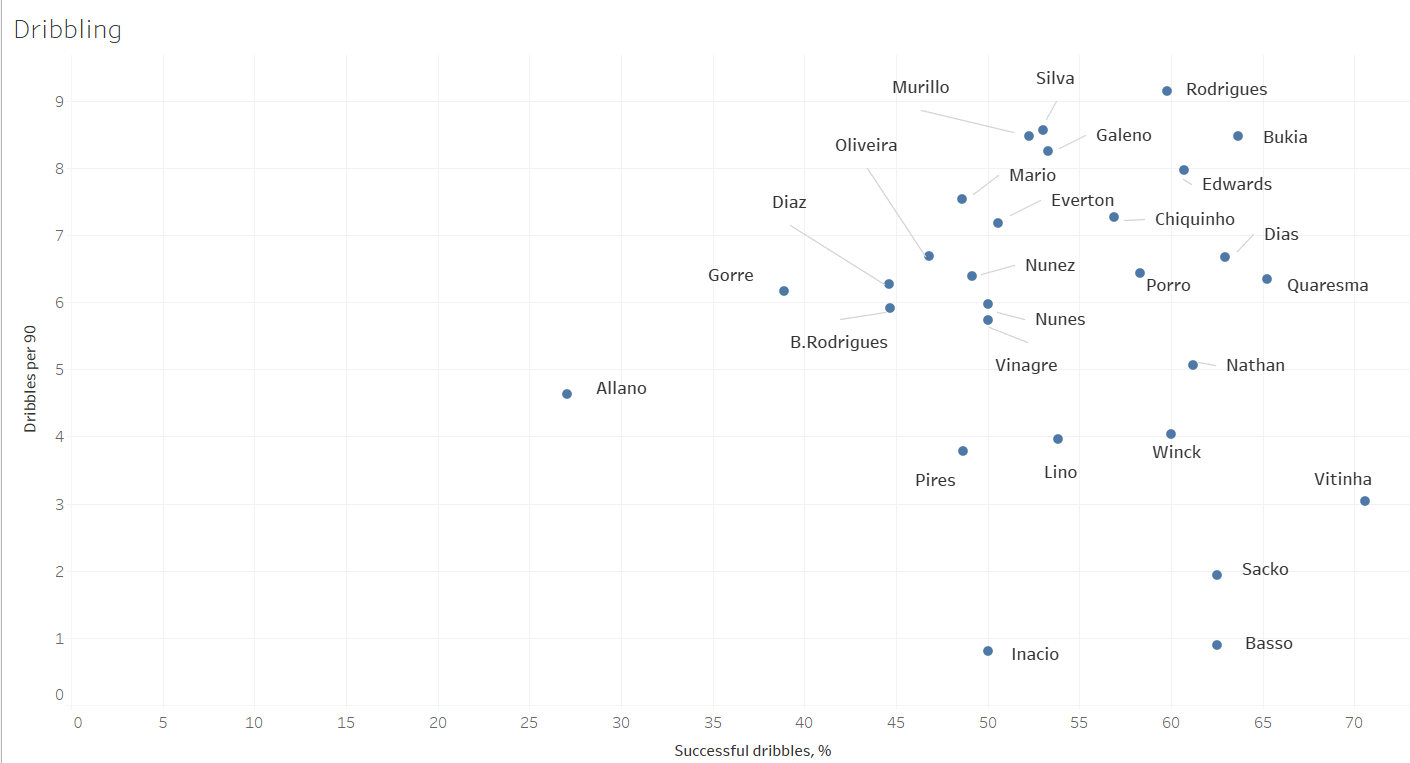 One of the interesting elements of Diaz’s game is his positioning, as we touched on earlier, he is an inverted winger so plays on the left despite being right-footed when this is the case it often leads to play a lot more centrally than Diaz does, as the heatmap shows he really keeps his width. Doing this creates a real issue for defenders, as they have to decide whether to stay compact or lose their compactness but someone stays near Diaz. By keeping his width in this example, it means the back 4 lose their compactness which creates room for a midfielder runner as shown below. But more importantly, it gives Diaz space to operate in. 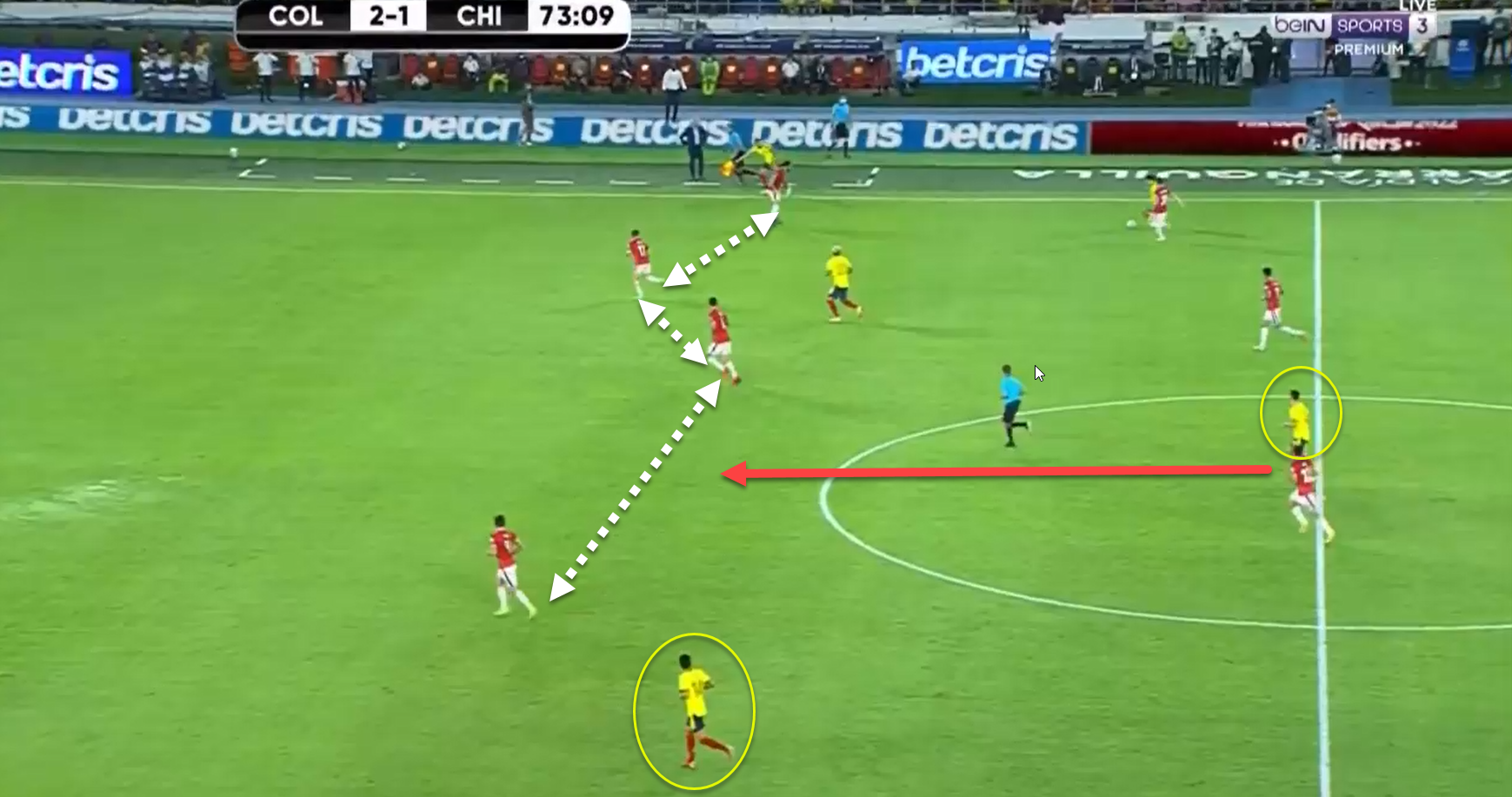 The effect of this is shown below, with the right-back now having to decide to track the run of the midfielder or stay with Diaz, on this occasion he stays goes with the midfielder which leaves Diaz in acres of space.

The ball is then passed to Diaz who has all the room in the world to set himself and go and score on his right foot, even if it took a deflection on the way in.

When addressing Diaz’s performance in terms of data we touched on his progressive carrying ability. A progressive carry is when a player carries the ball towards the opposition goal for more than 5 meters. As we have already established Diaz is the leader in this metric in the Primeira Liga and when watching Diaz, it becomes apparent why. Diaz is a great dribbler as already demonstrated and this translates brilliantly into his carrying ability. This is a great example from Porto’s Champions League clash with AC Milan, Diaz picks up the ball just inside the opposition half.

As you can see Diaz has now carried the ball a significant distance and is now in the final third of the pitch, in the process he has given himself three passing opportunities.

Diaz eventually carries the ball to near the edge of the box and gets a shot off which hits the post.

Although Diaz hits the post if we are being critical, you could argue he should have found a pass. However, this is still a notable example of Diaz progressing the ball and creating a goal-scoring opportunity.

As shown throughout this report Diaz is an extremely exciting prospect and no wonder some of Europe’s biggest clubs are sitting up and taking notice. With a combination of great speeding and ball control, he is one of the most dangerous attackers in Europe. He has started to add goals to his game this season something which was previously missing in his game, whether they’re is here to stay is somewhat of a mystery. However, if he can keep this up Diaz could well be the next exciting South American to come out of Portugal.