The Friday night lights shone brightly in Paris as the Ligue 1 champions took centre stage. Most would assume this is referencing Paris Saint Germain, but Lille are the one with gold around their badge. For the first time in nearly a decade, PSG welcomed the champions of France as challengers. Concerning, PSG will always be the hottest ticket in town, but it is nice every once in a while to see the balance of power shift, regardless of how long it shall last.

Coming into this game many might have expected a whitewash with PSG winning all but two games so far this season and Lille not living up to their championship status for a multitude of reasons, but it has not been all plain sailing for Pochettino’s men in the capital. With the addition of his fellow countryman Lionel Messi from Barcelona, belief gathered, thinking PSG can go all the way in Europe with their already star-studded line-up and while results have been positive, performance has not been. PSG have won two out of three games in the UEFA Champions League, beating Manchester City and Bundesliga outfit RB Leipzig but Neymar, Lionel Messi and Kylian Mbappe have not shown the attacking cohesion we have all been waiting for and in doing so creating major team problems.

In this tactical analysis, I will showcase Lille’s brilliant defensive shape and the intricacies that were involved, which helped nullify Paris Saint Germain in the first half. I will also cover PSG’s problems out of possession and how their way of resolving them is detrimental. Last, I will go over how PSG could recover in the second half thanks to changes in tactics.

PSG made use of a 4-3-3 with some alterations from their last appearance as Gianluigi Donnarumma started in goal with a back four of Thilo Kehrer, Juan Bernat, Marquinhos and Presnel Kimpembe. In midfield, Danilo Pereira, Georginio Wijnaldum and Idrissa Gueye formed a front three, with Neymar, Lionel Messi and Ángel di María as PSG’s front three.

For Lille, their standard 4-4-2 was utilised with Ivo Grbić in goal. In defence, Mehmet Zeki Çelik at right-back, José Fonte and Tiago Djaló at centre-back with Reinildo Mandava. In midfield, Xeka and Renato Sanches played in centre-midfield with Nanitamo Ikone and Jonathan Bamba as wingers. Up front lies Burak Yılmaz and Jonathan David. 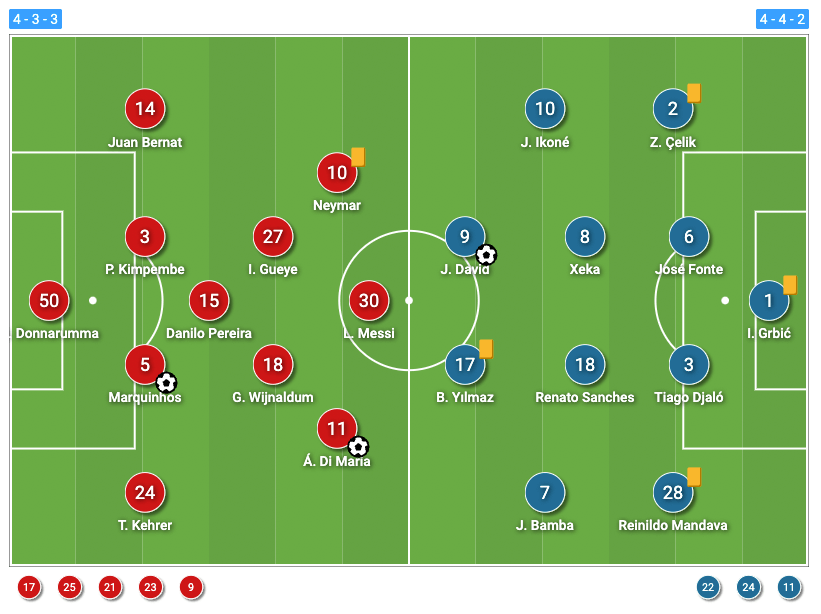 One of the key components to Gaultier’s league winning campaign last season was his defensive shape when out of possession and this theme led Lille into good stead within the first half of the match. Under Jocelyn Gourvennec, Lille utilised a rigged 4-4-2 medium/high structure. This system was effective because of the spacing and positioning of Lille’s players. The visitors understood PSG wanted to play vertically through the thirds and to combat this, Lille allowed PSG’s centre-back time and space to and denied central passes into PSG’s midfield three. Lille’s pressing front two would be close to each other and position themselves in-between Danilo Pereira, which eliminates him as a forward passing option. Lille’s midfield was very narrow and in-result of this PSG could not find a pass-through to Georginio Wijnaldum and Idrissa Gueye because of this portion of their field being crowded out.

Because of Lille’s defensive stubbiness, they forced PSG to play wide to their fullbacks and play in wide areas. When the ball moves into these zones, PSG was unsuccessful because of Lille’s winger immediately pressing the fullback in possession; simultaneously having the opposition winger within his cover shadow, which denies him as a viable support option. PSG did well to recycle play and move the ball laterally, go restart play and find openings on the other side of the field.

Lille was one step better because of their ability to shift the block effectively and not allow PSG to overload them in wide areas. Lille could condense the space, with their central midfielder supporting the full-back and winger and creating a 3v3 situation. For all of a PSG’s passing and probing, they could not beat Lille’s medium block when in possession of the ball because of Lille controlling the space and only allowing PSG to play there they saw fit, and their first-half dominance saw them into the second half with a deserved 1-0 shoreline away from home. 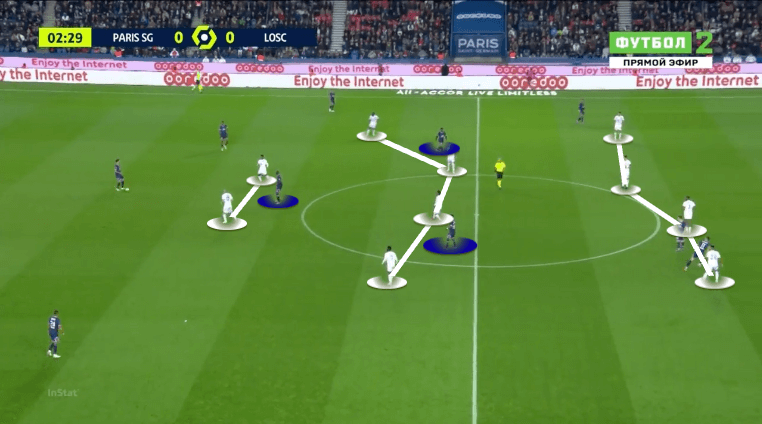 As mentioned prior, PSG has had some problems out of possession because of players, such as Lionel Messi and Neymar, and their inability to press when required, and this problem arose when facing Lille. Mauricio Pochettino is renowned for his pressing football and has tried to employ this way of playing in Paris, but when tasked to implement high-octane football with attackers who freeze when not in possession of the ball, the coaching staff must make alterations to rectify this issue.

With PSG’s frightening front three of Messi, Neymar and Di Maria, Mauricio Pochettino made use of a workman-like midfield in this match to compensate due to lack of defensive thrust from attackers. When Lille was building up from goal kicks, PSG wanted to press the opposition’s defensive line; Mauricio Pochettino tasked Georginio Wijnaldum and Idrissa Gueye to press in wide areas and vacate their central positions. The issues this creates is the space they leave behind which Lille took advantage of to significant effect. The opening goal of the game is a perfect depiction of this.

Here we can see Renato Sanches coming short to receive the ball and support the player in possession. Georginio Wijnaldum attempts to track this movement and, in doing so, leaves the space behind him. 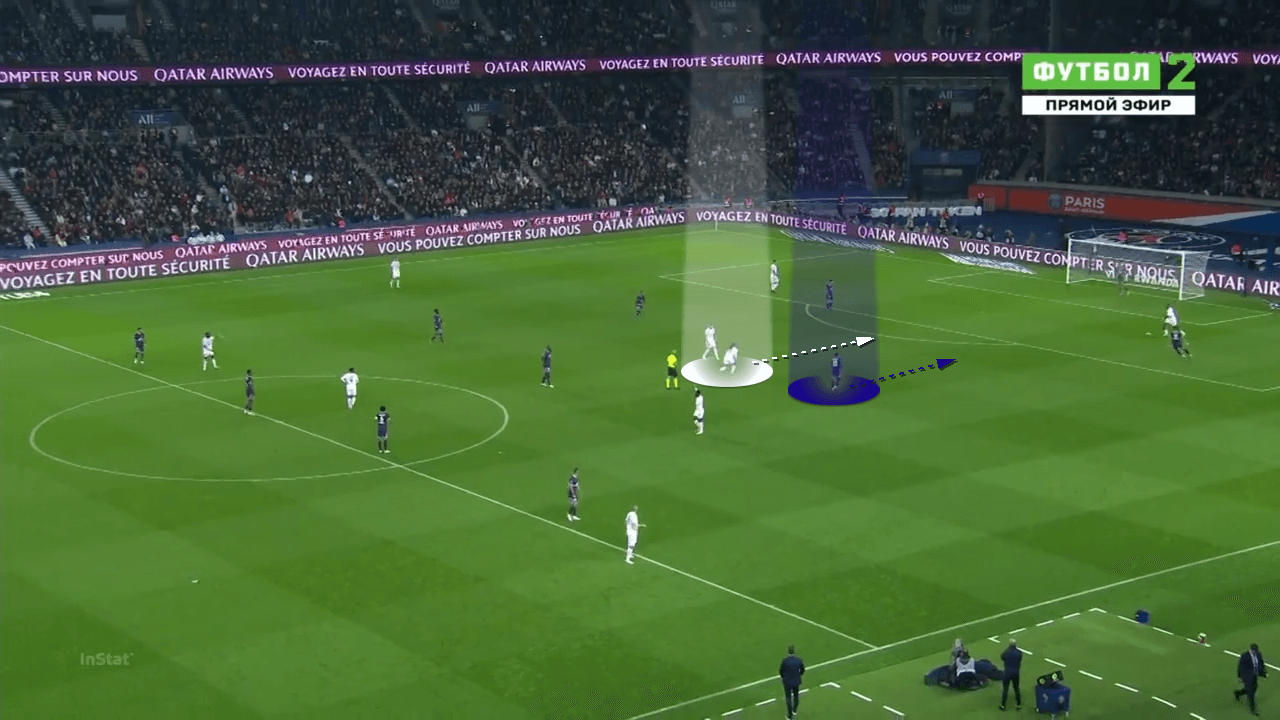 Lille moves the ball wide with their left-back Reinildo Mandava now on the ball and he can now move the ball down this channel. Jonathan Bamba notices the space, moves into it and now has time to receive, turn and pick the correct pass. 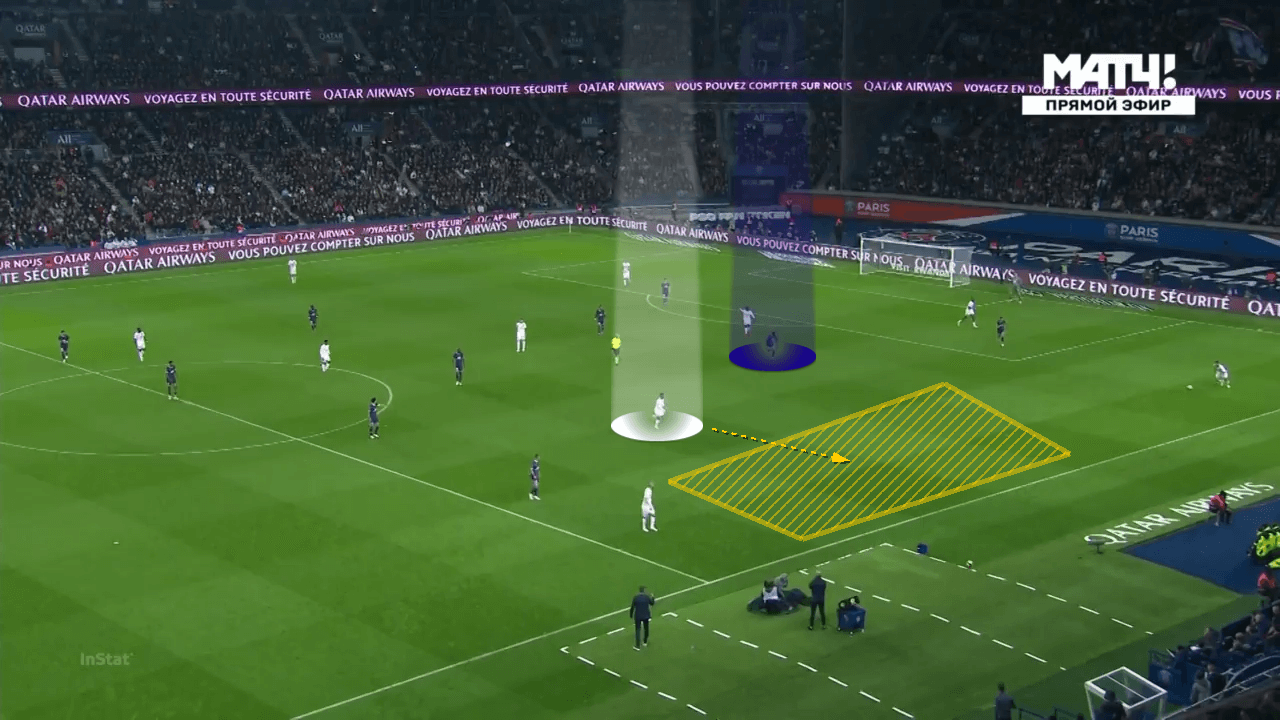 Georginio Wijnaldum can recover and track the run of Ikone within his own defensive third, but now Renato Sanches can receive the ball in the same space that was highlighted previously. Under no pressure, Sanches could find right-back Zeki Çelik and Lille could find an opening in the final third and take the lead. 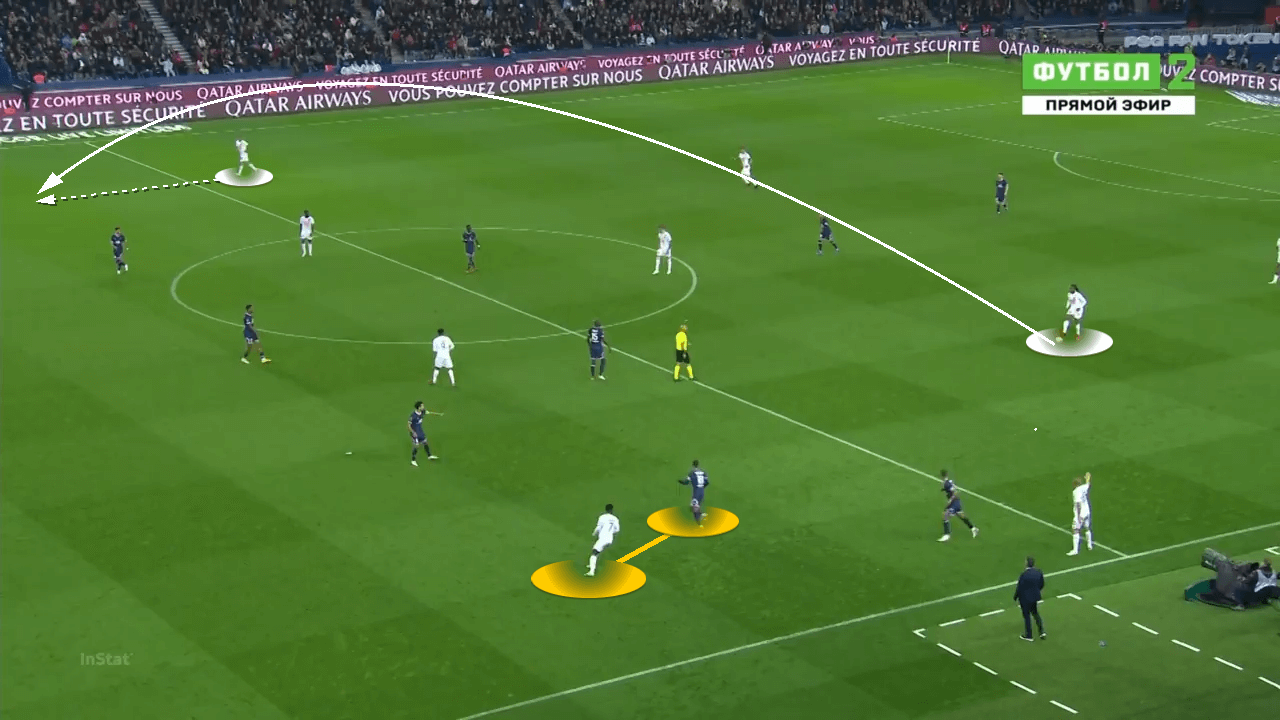 It is clear to see that PSG’s attackers are to the detriment of their pressing structure, but the likes of Neymar and Messi also create a knock-on effect that affects the team negatively. Because of the compensatory defence-minded midfield employed in this game, ball progression was a major issue for PSG during this match. With Georginio Wijnaldum and Idrissa Gueye and Danilo Pereira, PSG possesses three players that will bring energy to the side; in addition, they are all exceptional at winning back the ball, but this group of midfielders does not contain ball progressors that can find teammates in between the lines.

PSG struggled to move the ball centrally, and in wide areas, their rotations and combination play were ineffective and did not disturb Lille’s defensive block because of the profile of players profiles utilised in midfield. Overall, PSG’s first-half display was one to forget for multiple reasons, and they finished the first half with a goal down and work to do.

Mauricio Pochettino was well aware of his team’s shortcomings during the first half and knew changes needed to be made. At the start of the second half, Lionel Messi came off and Mauro Icardi came on along with a slight formation switch. PSG formed a makeshift back three with asymmetric fullbacks. Thilo Kehrer, Marquinhos and Presnel Kimpembe formed the back three, which allowed Juan Bernat to push higher. They still positioned Ángel di María out wide to keep width on the right side. Danilo Pereira and Idrissa Gueye created a double pivot with Georginio Wijnaldum operating as a ten with Mauro Icardi up-front with Neymar, who has permission to drop deeper into pockets of space.

This new system was beneficial, as it created a 3v2 versus Lille’s pressing front two, PSG’s 3-2 shape during build-up created passing networks which allowed them to play more freely. With Neymar playing centrally up front, he could create overloads within the central midfield. He could do so by operating on the same line as Georginio Wijnaldum and creating a box shape with the double pivot behind them. PSG’s possession game improved massively, but that was not the only progression they made in the second half. 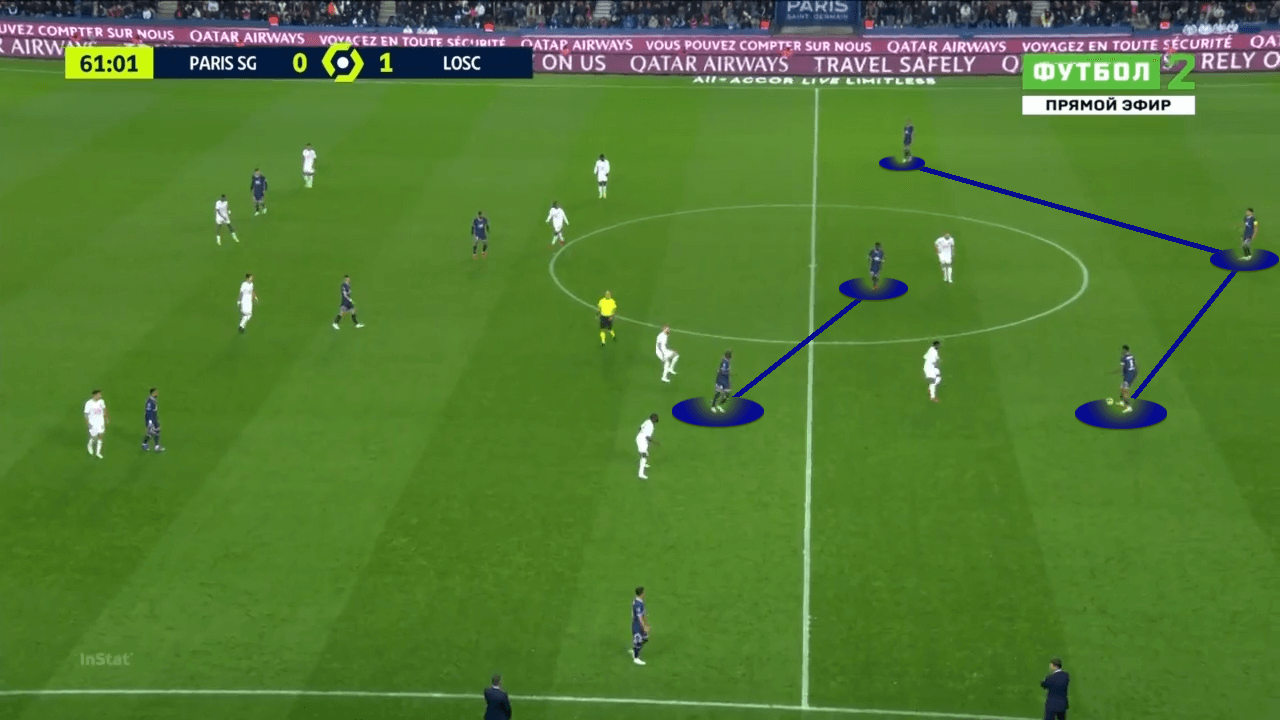 PSG’s second-half press saw strides because of a fresh Mauro Icardi coming off the bench and providing the needed impetus and new positions taken by the players for Paris. Georginio Wijnaldum is now playing higher up the pitch without abandoning space in midfield. On top of this, Mauricio Pochettino positioned Ángel di María and Juan Bernat higher and can press Lille’s fullbacks quicker and more effectively.

Top of the table Paris Saint Germain faced off against Current Ligue 1 champions Lille in the first game of matchday 12. PSG redemption campaign has begun well but this does not show the full picture. Lille has not started the season well and was looking to build momentum in the French Capital. The star-spangled band of Neymar, Messi and others look to conquer the football world, but with the addition of the Argentine, Mauricio Pochettino pressing system fails and because of this, many problems, problems that were exploited by Lille. Through Pochettino’s ability to react and make changes when needed, PSG could stage a second-half revival and clinch all three points.