The Bundesliga continues to pump out fascinating games week-in-week-out, with Koln and Bayer Leverkusen taking centre stage this past weekend. These sides have been two of the more tactically interesting teams this season and following this draw they sit in eighth and fourth place in the league, respectively. Leverkusen in particular remain in the chasing pack of Borussia Dortmund and Bayern Munich who adorn the top of the table with 21 and 22 points themselves. Gerardo Seoane’s Bayer Leverkusen had the best of the first half, and went in at the break two goals to the good, courtesy of finishes from Patrik Schick and Karim Bellerabi. However, Steffen Baumgart’s Koln rallied in the second half, and the transformed Anthony Modeste continued his excellent form this season, notching twice to ensure the points were shared between the sides. This tactical analysis will provide an analysis of the key tactics used by both sides over the course of the game.

Koln lined up in a midfield diamond in a 4-3-1-2, with Timo Horn in between the sticks. The back four had Luca Killian in at centre-back alongside Rafael Czichos. Benno Schmitz and the outstanding Jonas Hector played at full-back either side of them. Dejan Ljubicic anchor the midfield diamond and Odrej Duda sat at the top of it in the 10 position. The hard-working Florian Kainz and Salih Ozcan played in the wide midfield positions. Modeste was partnered up top alongside Mark Uth.

The graphic below shows Leverkusen in a 4-4-2, however, teenage wonderkid Florian Wirtz had more of a free role than shown in this image. At times it could look like a 4-4-2 or a 4-2-3-1 with Wirtz drifting into the 10 position. Lukas Hradecky started in goal with Jeremie Frimpong, Odilon Kossounou, Jonathan Tah and Piero Hincapie in front of him in defence. Kerem Demirbay and Robert Andrich were partnered together in central midfield with Bellerabi and Moussa Diaby either side of them on the wings. Patrik Schick led the line up front. 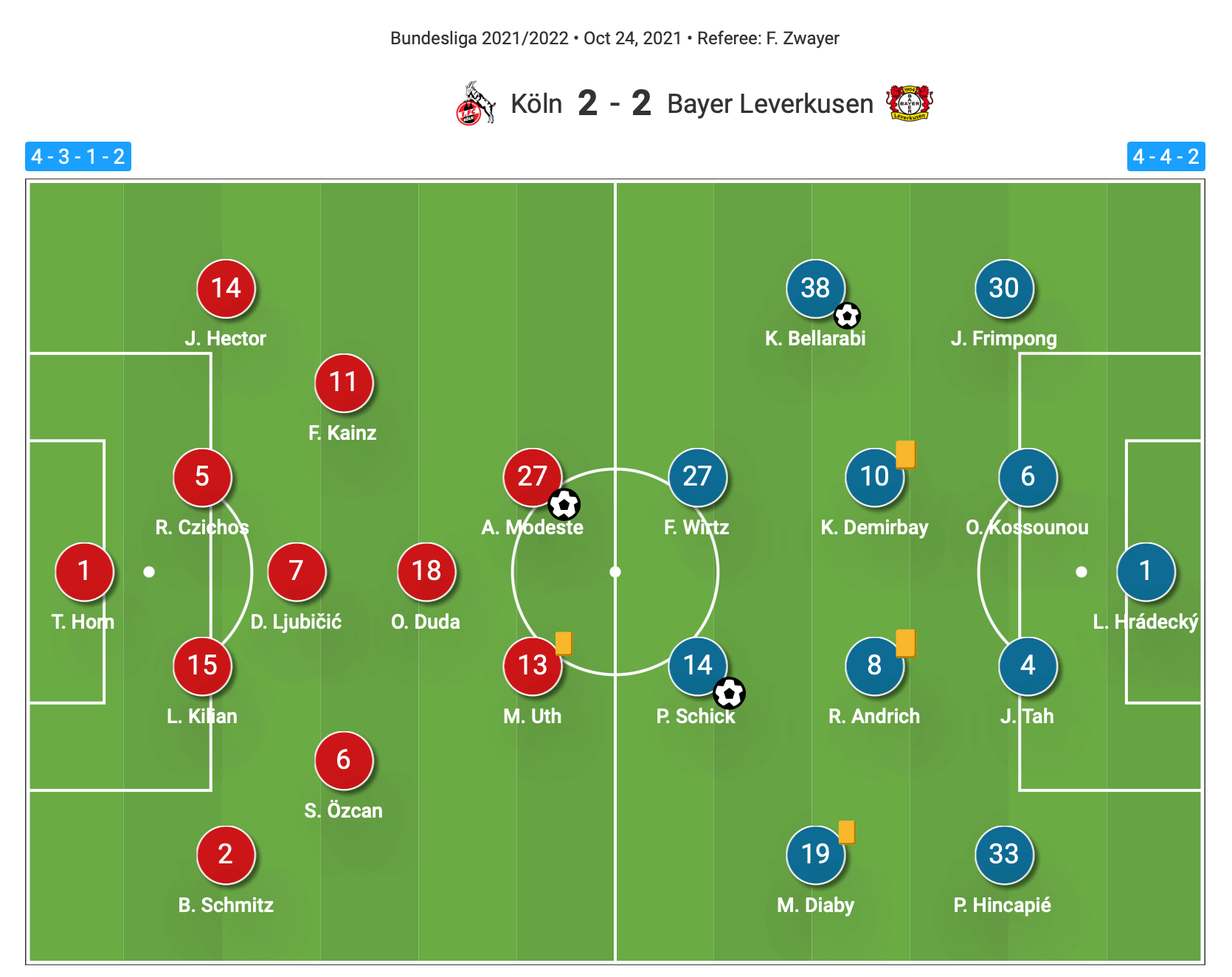 Koln and Leverkusen had a very similar xG, with Koln’s slightly higher on 1.31 and Leverkusen at 1.19. However, Koln had a far higher volume of shots with 16 over the game. Yet only five of these were on target. A glance at their shot map from the game shows a high number of efforts from long distance and in general a lack of shots close to or inside the six-yard box.

Leverkusen on the other hand had only half the shots Koln did, with eight, and yet also hit the target on five occasions. Incidentally, all of their shots came from inside the area. 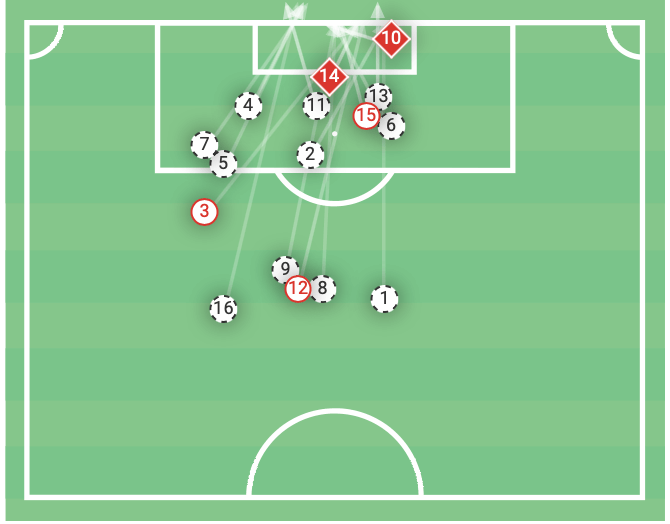 Leverkusen’s prime source of attacks came from counters. Their fast breaks continuously caused Koln issues, with the speed and flair of Diaby, Bellarabi and Wirtz in particular giving Leverkusen the pace and directness needed to structure these counter-attacks.

Leverkusen had nine counters over the course of the game as shown in the graph below, however, even attacks that weren’t necessarily classified as counter-attacks by Wyscout, were nevertheless very quick periods of possession with the intention of releasing their attacking players as quickly as possible. 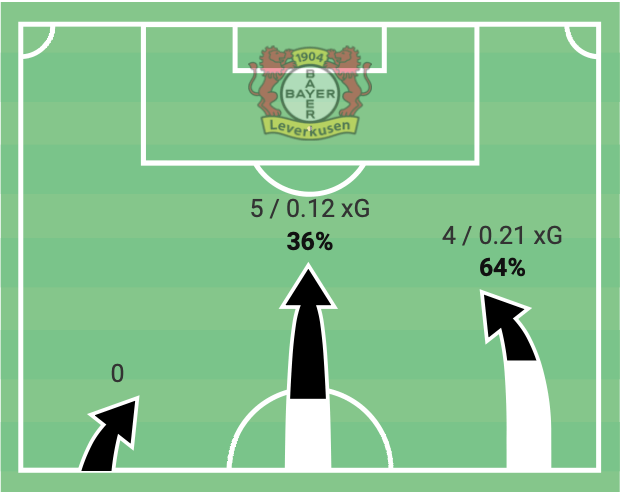 Leverkusen pressed with a tight central group, and when pressing inside Koln’s half they looked to show them inside into this crowded midfield. As soon as the ball was turned over, as it was in the image shown below, Leverkusen immediately had players around the ball to secure possession, whilst a runner ahead of the ball looked to find space as quickly as possible along the width of the opposition backline. 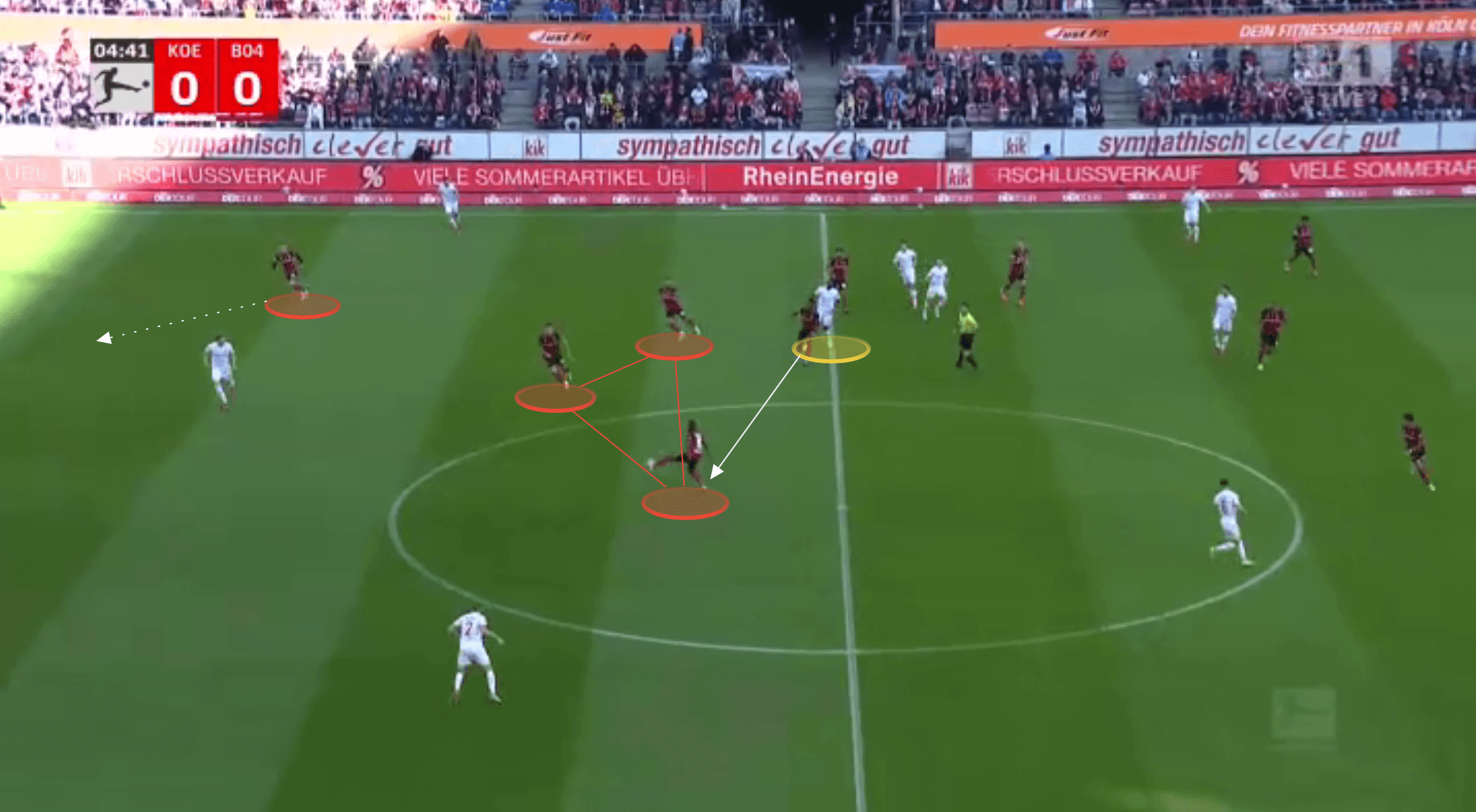 These quick interchanges initially would draw the opposition counter-press towards the ball and leave space ahead.

However, if there was no central compactness, Leverkusen would look to get the ball into a forward player at the first chance. 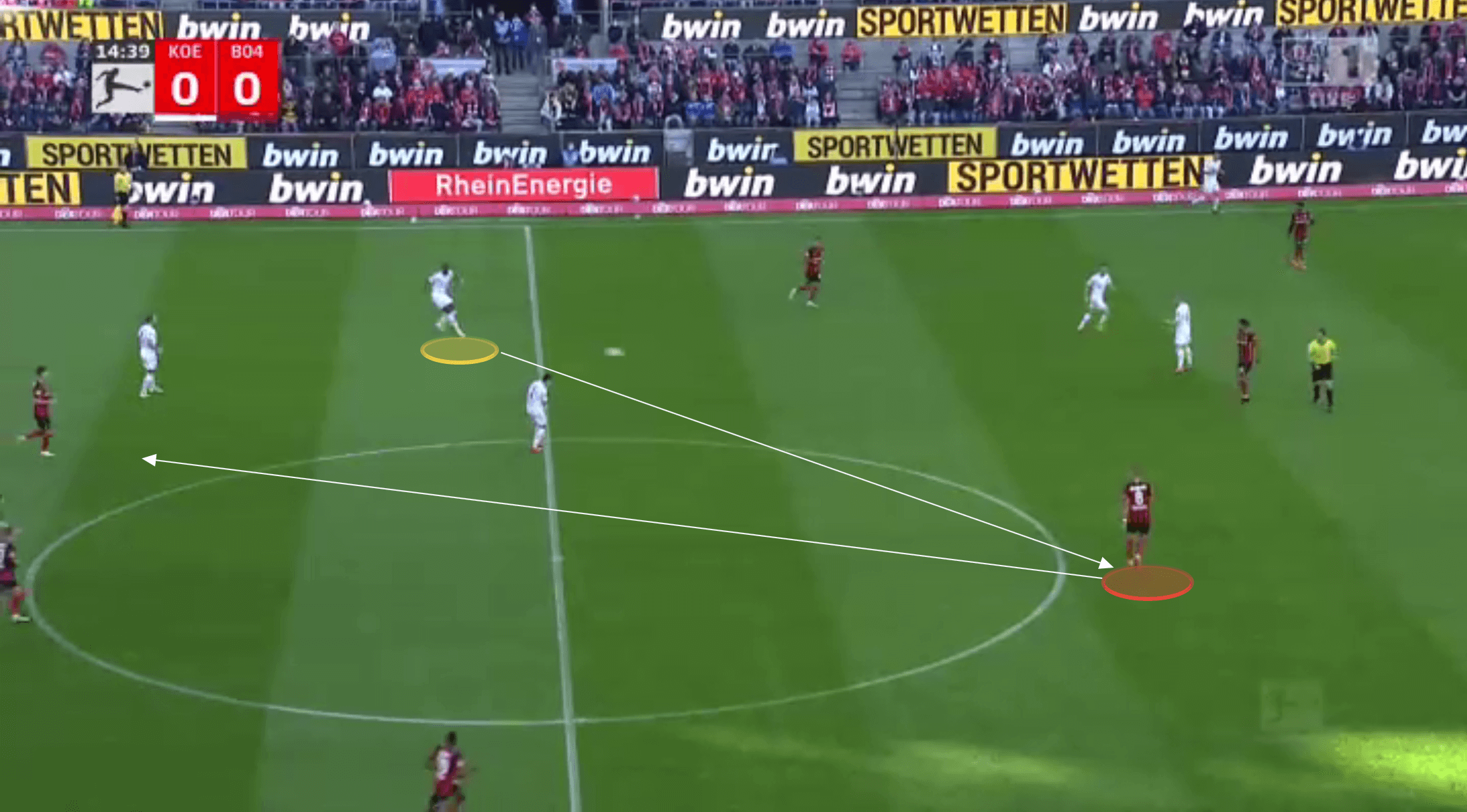 There would still be some form of interchange between these players, however, giving Leverkusen’s wide players the chance to push forward either side of the Koln centre-backs, catching Koln’s full-backs high and wide. We can see this pattern occurring in the image below, which led to Leverkusen’s opening goal. As the ball was played through to Diaby on the left side, the french winger drove forward before playing an inside pass to Schick who scored from close range. 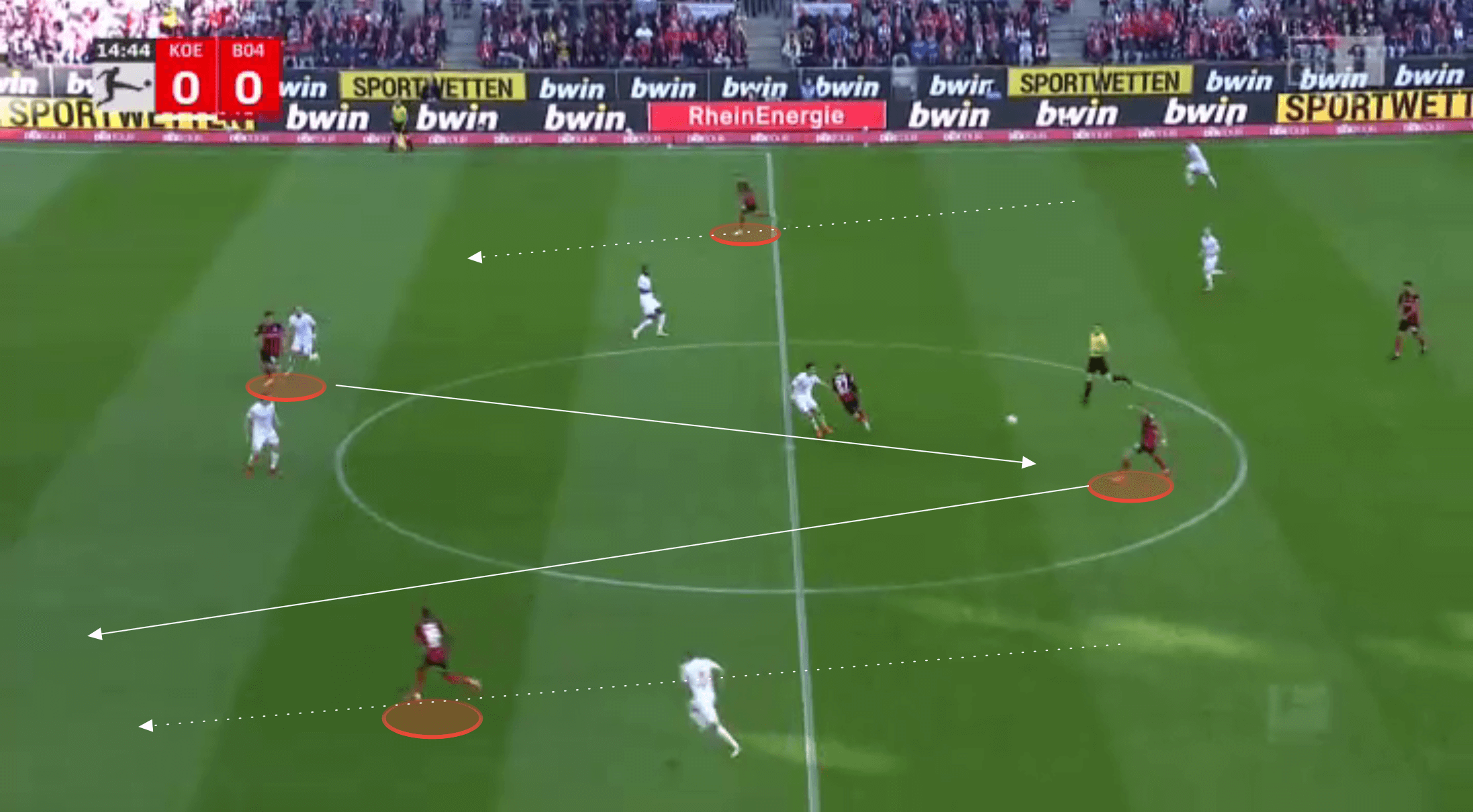 The final thing worth noting about Leverkusen’s string of counter-attacks was the sheer number of players they were able to get forward at a much faster pace than Koln were able to drop players back. Koln’s prolonged periods of possession led to them perhaps being sloppy in this regard, pushing too many players forward, and at 2-0 down, as in the example below, the game could have been put of reach within 25 minutes. 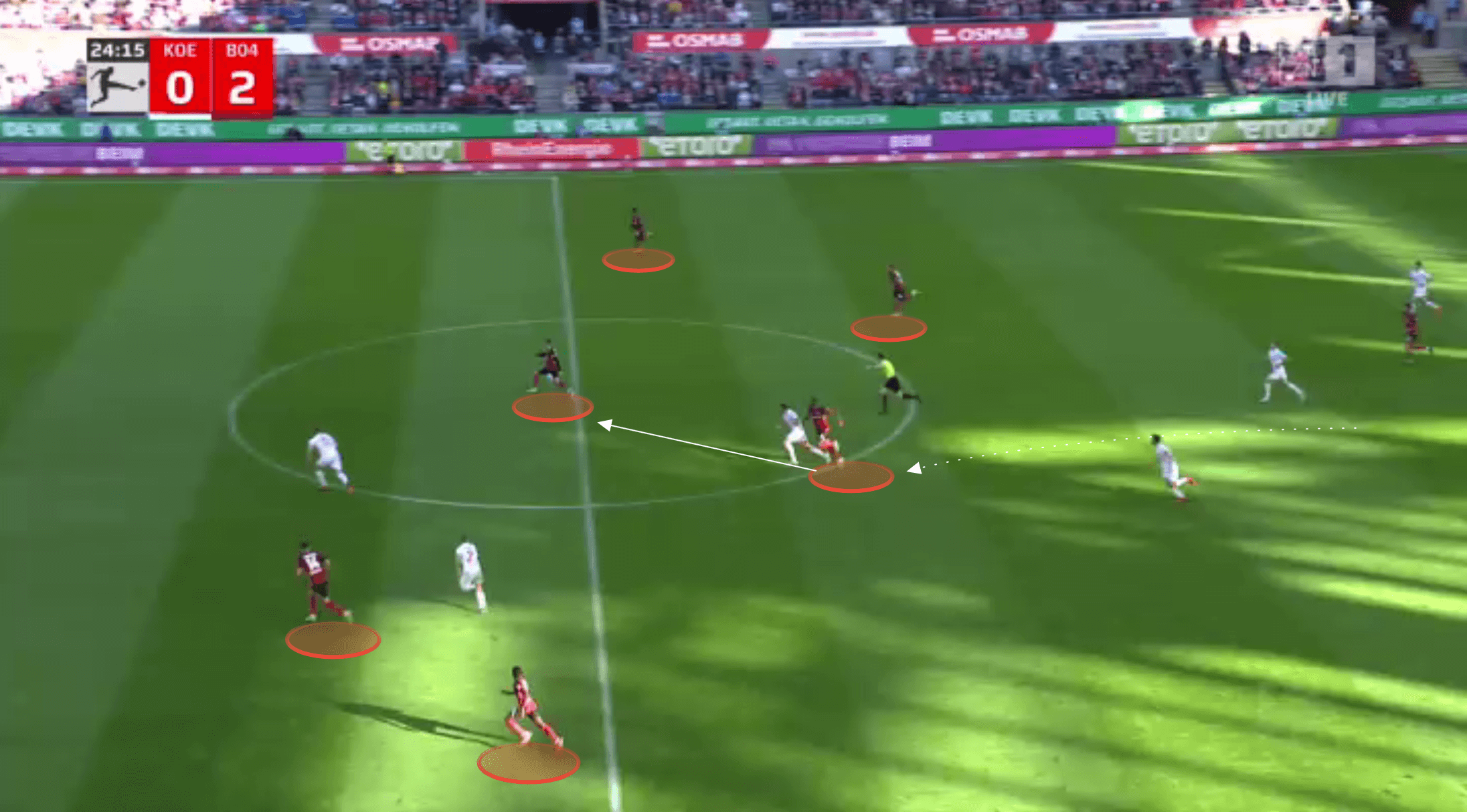 Leverkusen’s goal in attack was to draw Koln’s defence out of a compact shape and exploit the gaps in between. This can be seen in the previously shown example where Diaby was played into the space between Koln’s centre-back and right-back. However, in more developed attacking play, there was less space to create such an opportunity. Nevertheless, the dribbling and skill of Diaby, Bellerabi and Wirtz once again proved a factor in allowing Leverkusen to create attacking chances. By attacking the full-backs, predominantly Schmitz rather than Hector, they looked to draw this player out of the backline. Whether the inside centre-back came over or not was irrelevant once this goal was achieved. If they didn’t, there would be space to access in between Schmitz and Killian, his inside centre-back. If Killian did come over, space in between himself and Czichos. If Czichos came over…etc, etc. This would repeat itself until there was space to attack on the outside of Hector at left-back.

Leverkusen’s second goal came from drawing Schmitz forward in such a fashion. In this instance, Killian was drawn over, and at least initially Czichos resisted, leaving space between the two centre-backs.

Wirtz showed phenomenal skill, lifting the ball over Schmitz as he received a throw-in to feet. This dribble drew Killian towards him, with Andrich recognising this and making a third-man run between the two centre-backs as a result. Schick moved away from the action in an attempt to accentuate the space by moving Czichos with him. 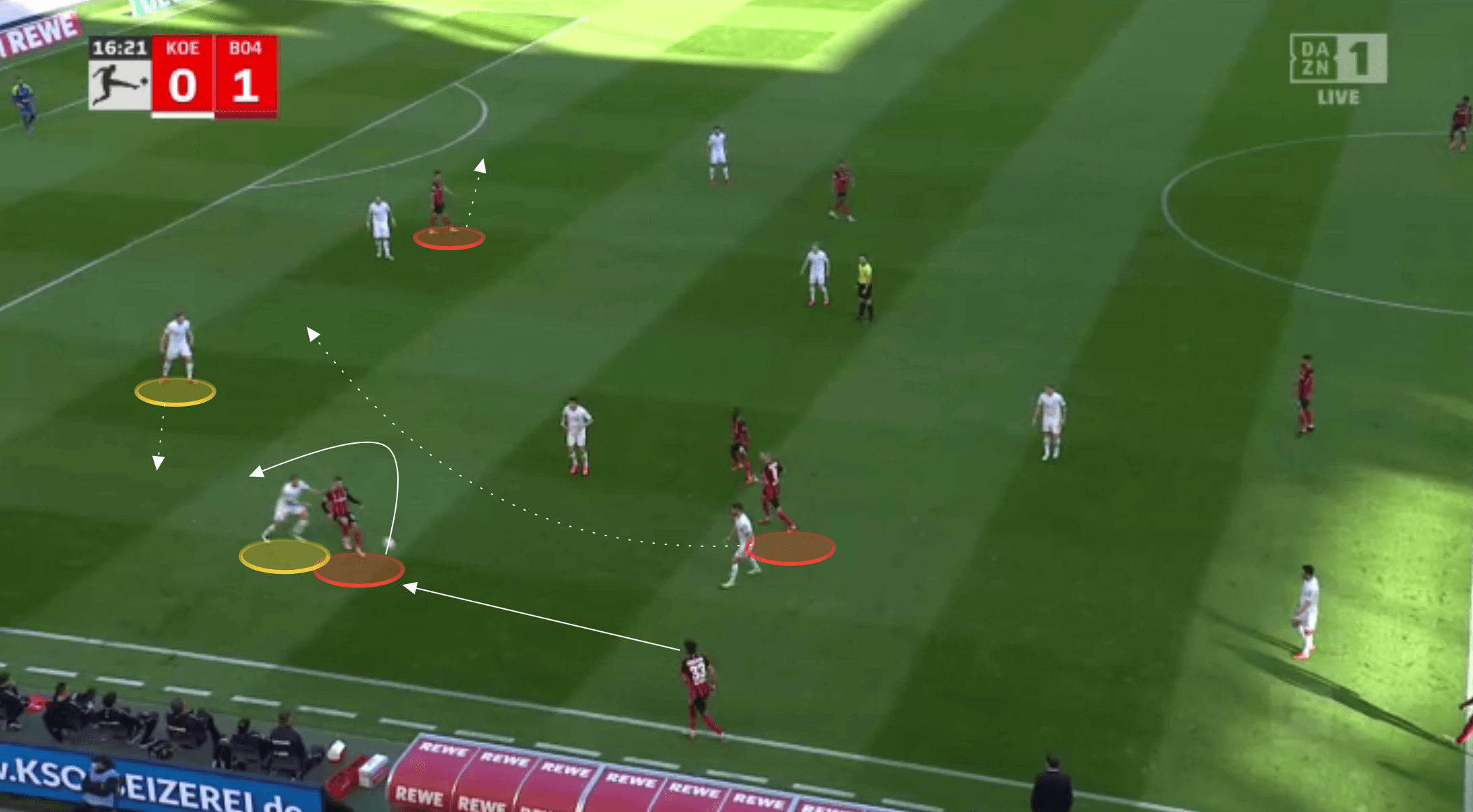 Wirtz once more exhibited outstanding skill to lift the ball over the onrushing Killian to his teammate Andrich. This pass was the cue for Czichos to step inside and press the ball. 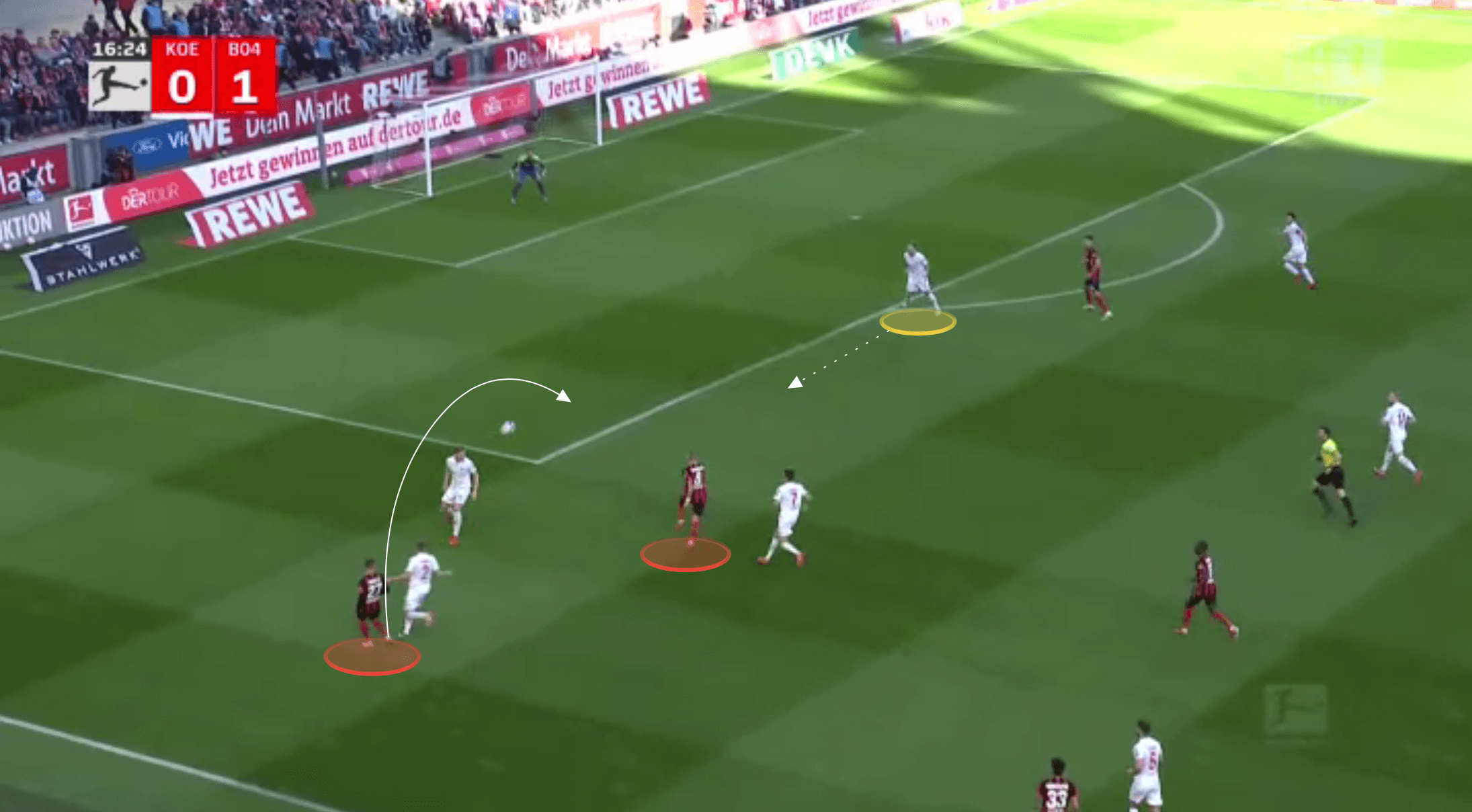 Hector ended up coming inside too, and this left space outside for Bellarabi to receive in space, where the winger was able to strike home, once more from a close distance. 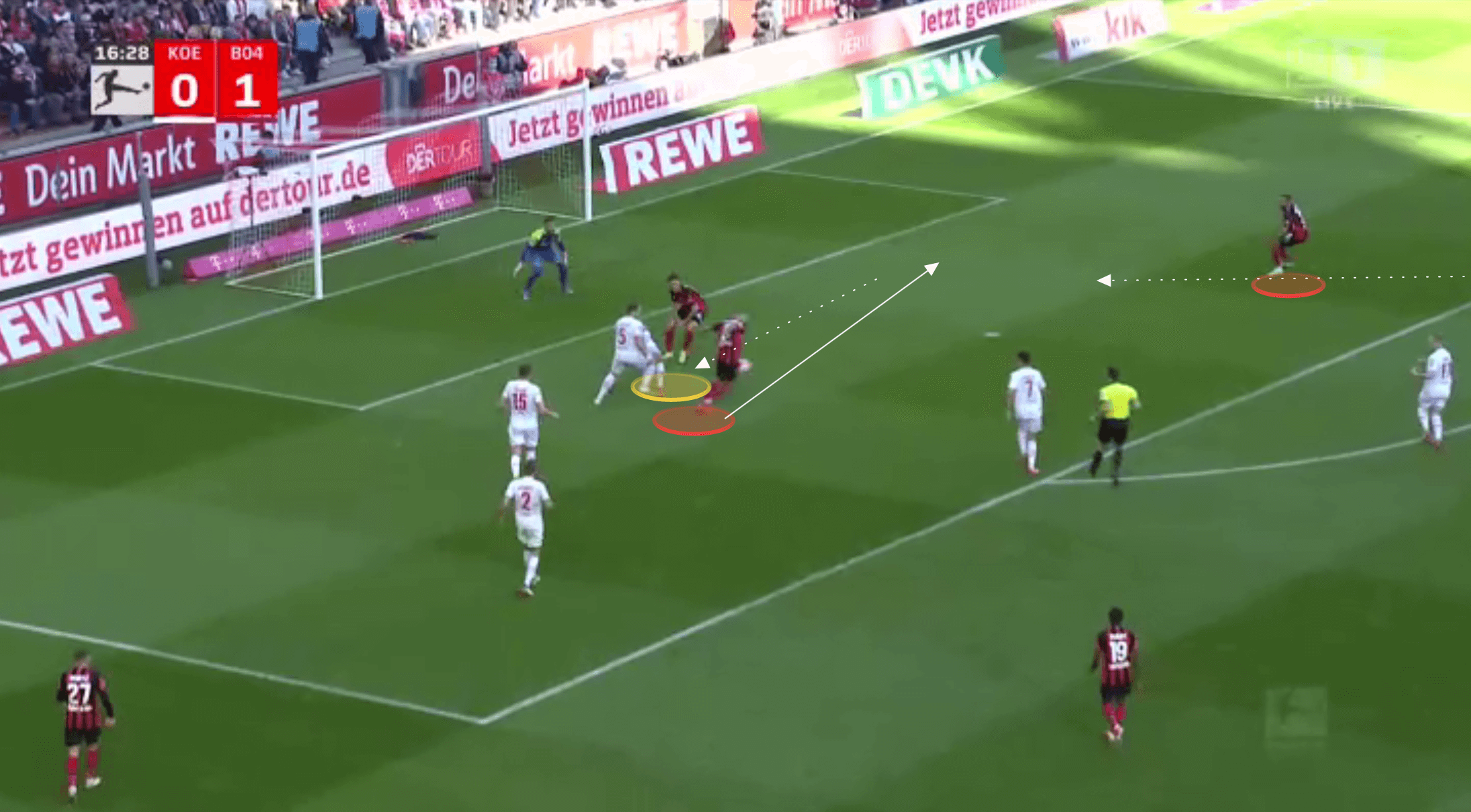 It will come as no surprise to hear that Koln were a threat from out wide. This season they have averaged a whopping 20.22 crosses per 90, by far the highest amount in the league. On this occasion they put in 21 crosses, completing eight of these. The vast majority of these deliveries came from the right flank. We can see this in the graphic below. 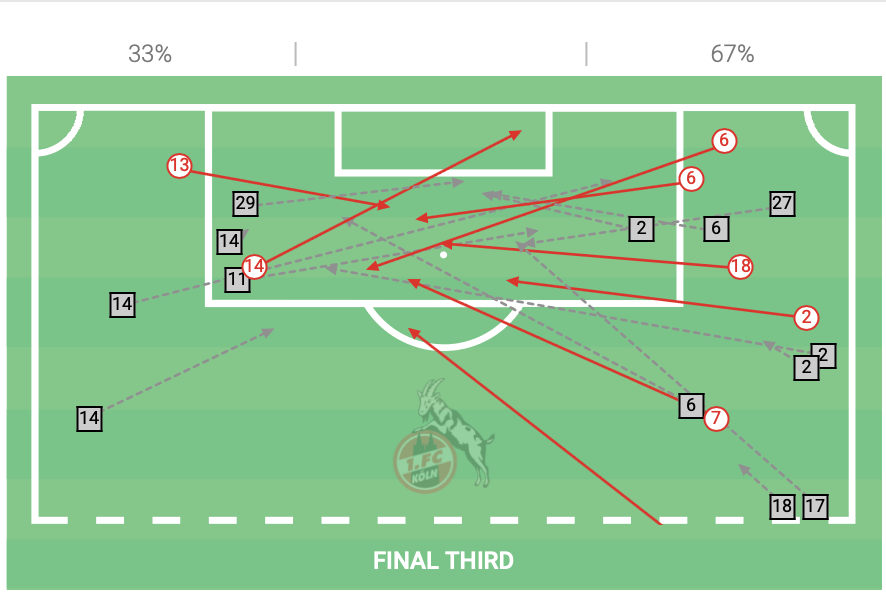 Koln didn’t just look to chuck crosses into the area, but rather structured their play to create high percentage crossing chances, through creating space down the flanks and leaving space in attacking areas inside the box too.

They engaged in patient build-up play, switching the play from side to side, looking to tire out Leverkusen and eventually have enough space on one side to force a crossing opportunity. They would have on central-midfielder drop deep, whilst the rest pushed forward. Whereas Hector remained high on the left flank, Schmitz sat deeper, with Ozcan moving wider onto the right flank. As a result, Koln moved away from their diamond structure in these instances. Duda and Kainz would push high remaining just shy of the front two in the central channel. 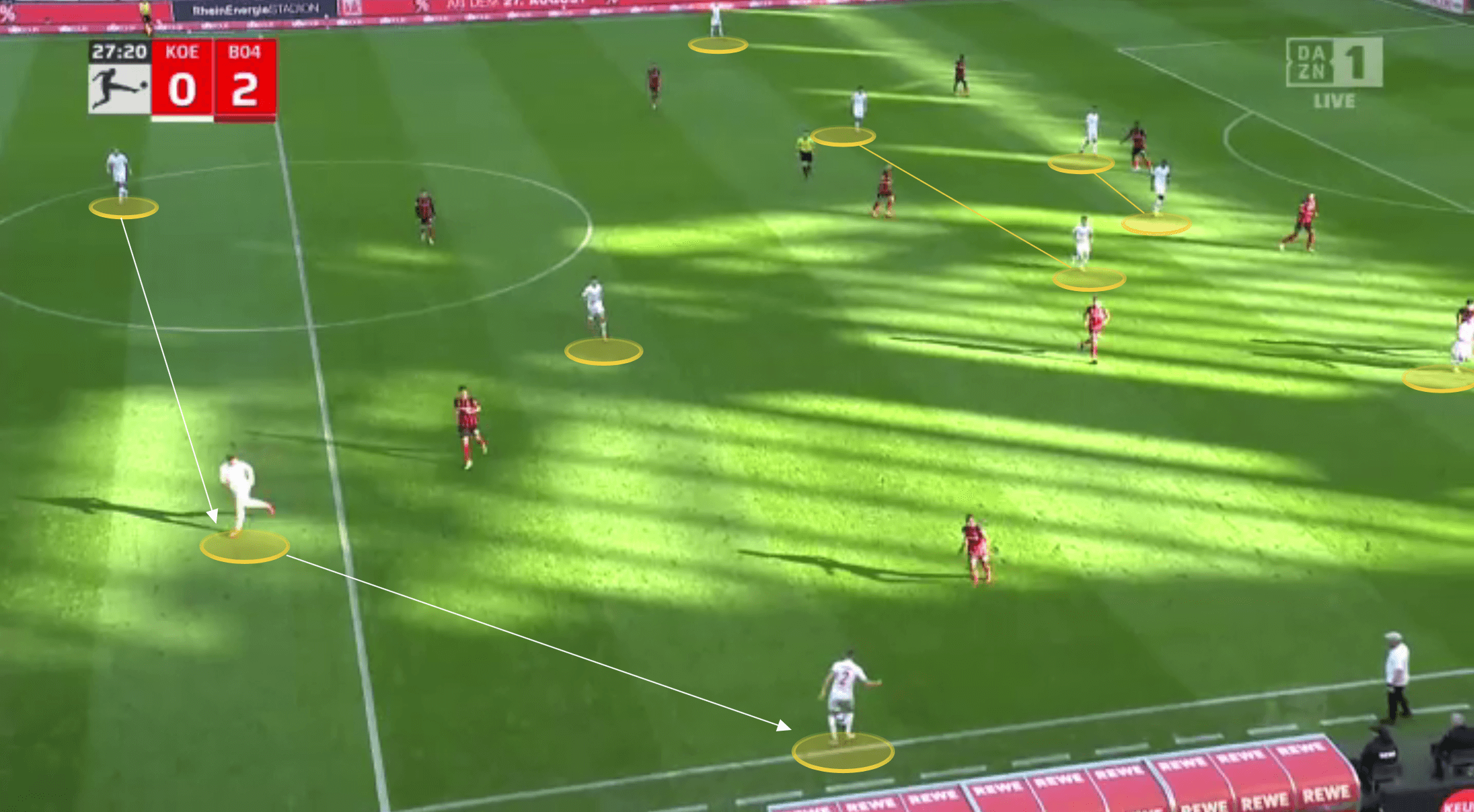 If Schmitz moved the ball down the line then Duda would move into the half-space looking to create a wide overload for Koln who then look to use this 3v2 to work a crossing situation. 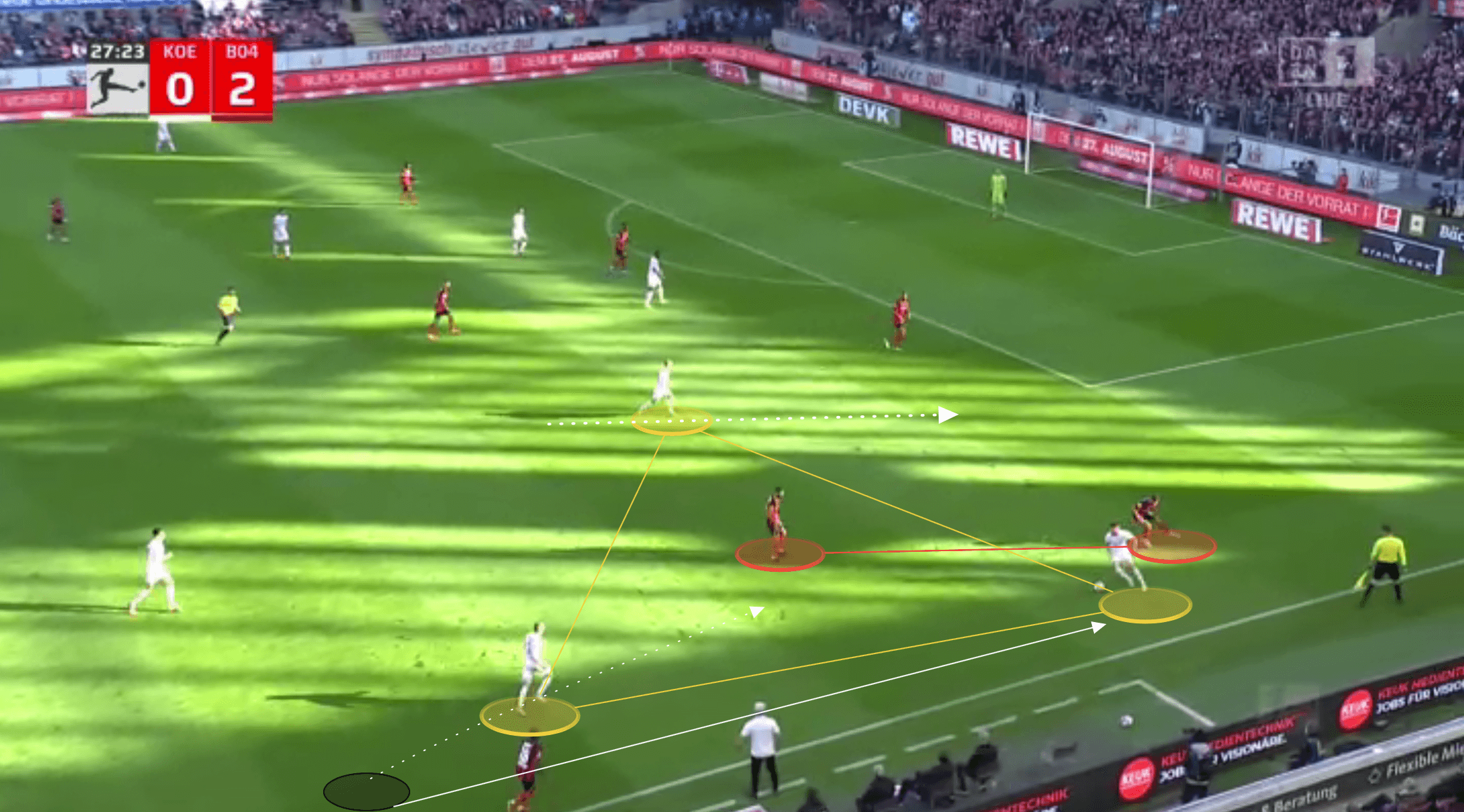 Kainz and Duda would also support the front two from their central starting position. When the ball was played into the area, like in the image below, they would be ready to latch onto any knockdowns from the front two (predominantly from Modeste though), and Koln were able to fashion shots from these half-chances, immediately having players around the loose ball. 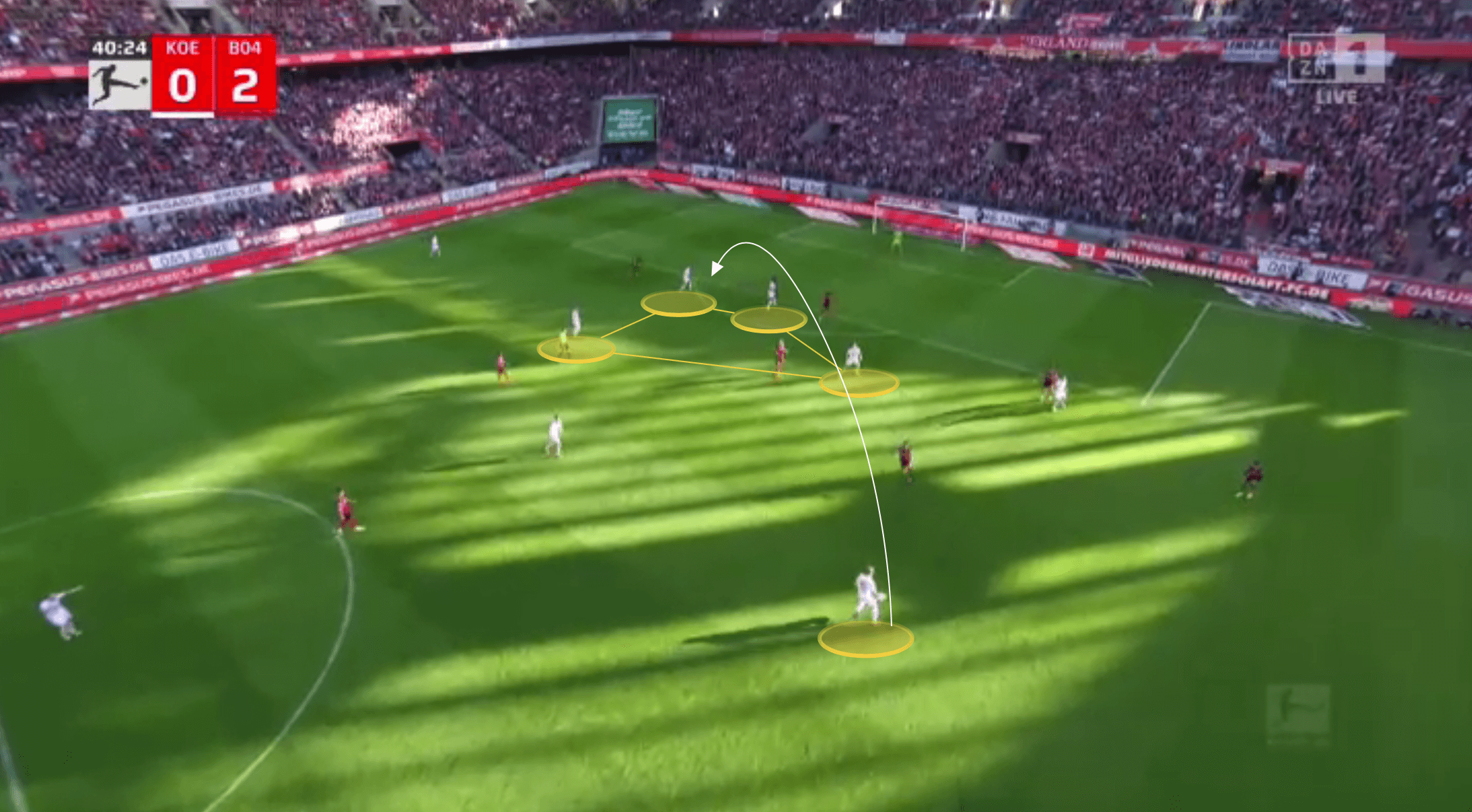 However, the vast majority of crosses came from wide areas, and it was these wide overloads that created the space for Koln to play a high number of these balls into the area.

Their first goal came from such an instance as the ball was worked inside to the under-lapping Hector who then played an inch-perfect cross into the path of Modeste at the back post. 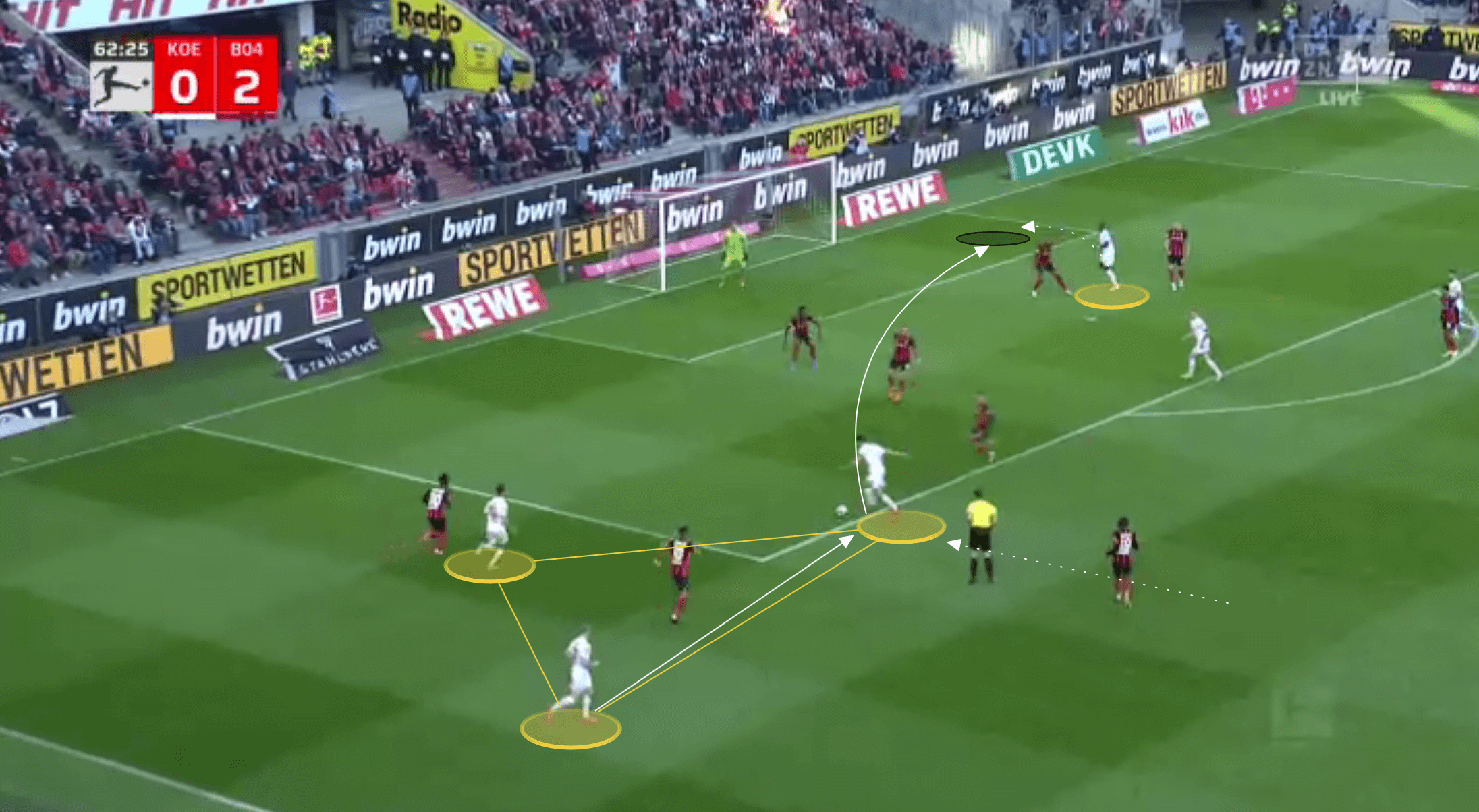 When Leverkusen sat back Koln would use clever movement to create space for players to receive in wide areas. One of the ways they did this was by initially having a player occupy this space and then simply move inside dragging his man with him.

We can see this pattern occurring in the following two images as a one-two is played from a Koln throw-in. The Leverkusen right-back Frimpong was targeted, as he closely marked the Koln attacker, Sebastian Andersson, ahead of the ball. His movement inside dragged Frimpong with him. 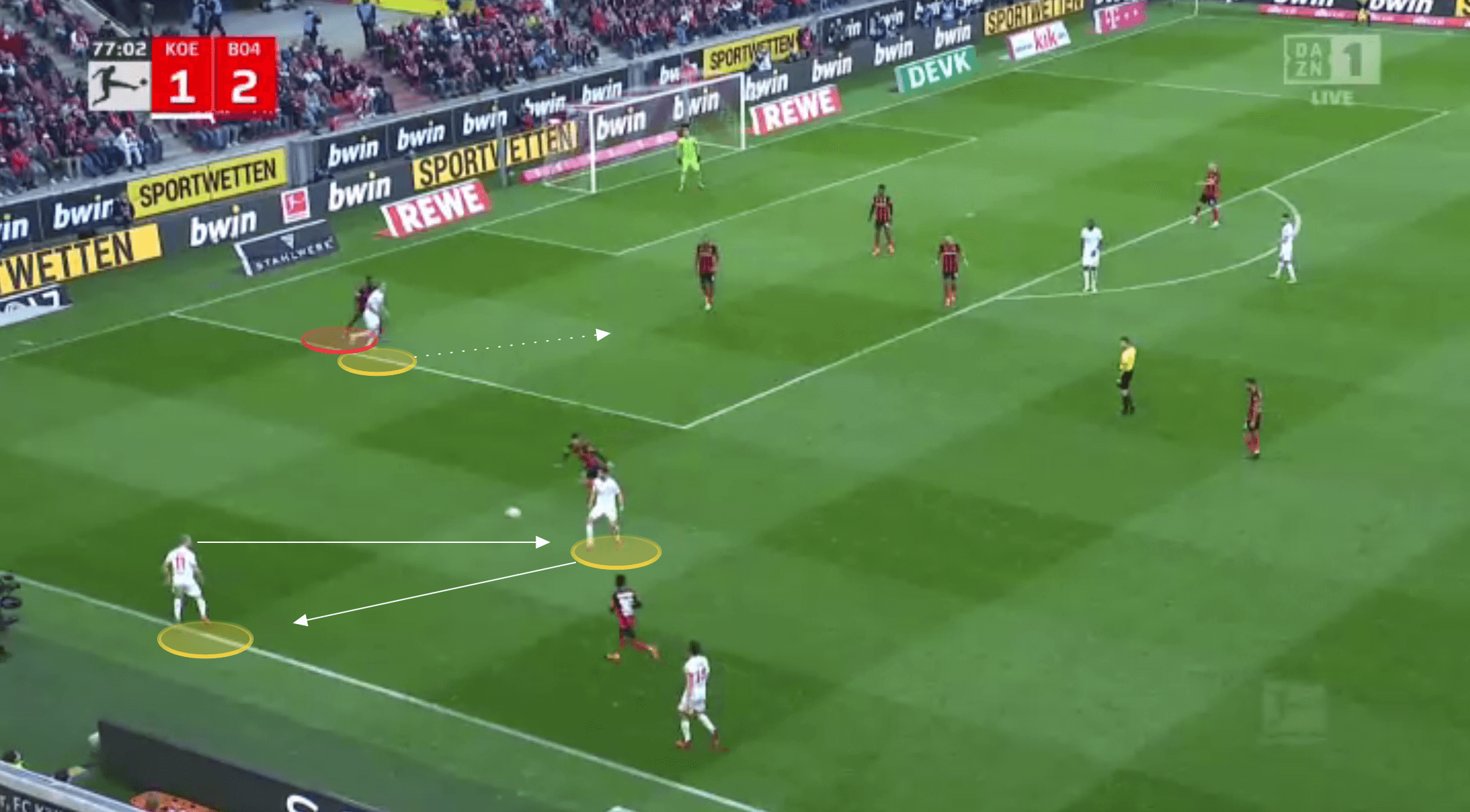 Following the one-two, Kainz was then able to play Uth inside. Frimpong realised he had been dragged away from this space too late and looked to recover, whilst Andersson then ghosted off of his marker into the highlighted space, as he looked to get on the end of Uth’s cross. 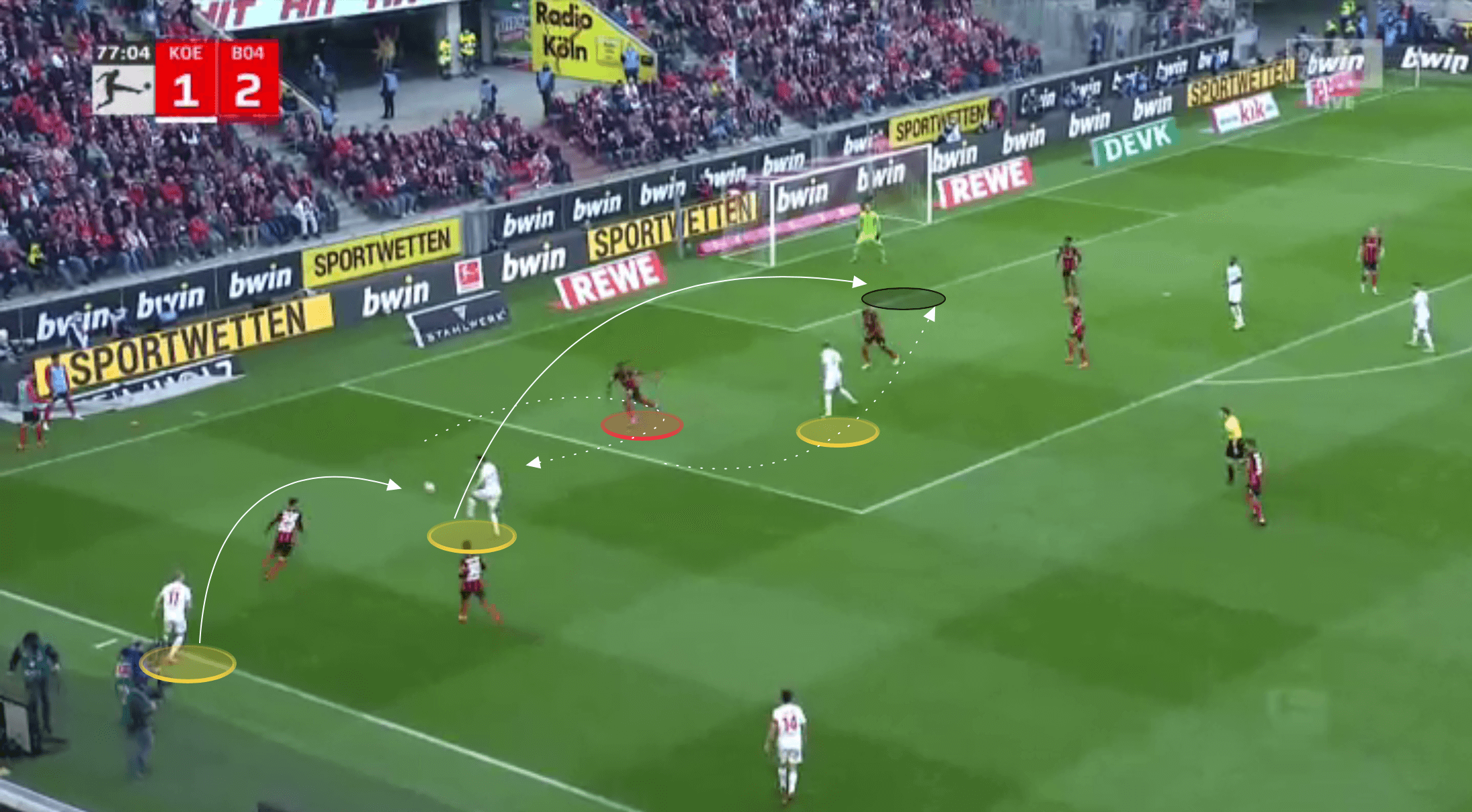 Koln’s equaliser would come within the following five minutes, this time from a long throw-in.

It was a game of conflicting styles where both teams had to adjust and adapt to the problems being thrown at them by the opponent. It was the intelligent, fast-paced counter-attacks of the away side that initially dominated the game, with Leverkusen going 2-0 ahead inside the first half. However, Koln showed resilience and a marked improvement defensively in the second half, as their dogged approach to attacking the Leverkusen goal from wide areas ended up paying dividends.