West Ham United have announced the signing of Brazil international Lucas Paquetá from Lyon for a club-record £37m fee plus £15m add-ons on a five-year contract. The midfielder becomes the Hammers’ 9th summer signing and takes their spending past £175m.

David Moyes’ side have started the Premier League season slowly, recording one win and three defeats, scoring just once in their first four games. This forced their hand into shopping for attacking reinforcements – step forward Paquetá.

After dazzling at Flamengo, AC Milan signed Paquetá in January 2018 for a fee of €38m. Expected to set the world alight, Paquetá proceeded to register just one goal and two assists in 37 appearances for the Rossoneri. In the summer of 2020, Paquetá’s time at the San Siro came to an end as he was sold to Olympique Lyonnais.

“I put myself under a lot of pressure in Milan,” Paqueta reflected in L’Equipe. “When I moved to France I told myself I didn’t have to put myself through that again. I just had to do my best.”

In France, Paquetá was a player reborn. He quickly established himself as a standout performer in Ligue 1, being named in the 2020/21 Team of the Year at the end of his first season. Moreover, he missed just six league matches in two full campaigns in Lyon.

Despite Lyon’s struggles as a team, Paquetá recorded a combined 29 league goals and assists, with his underlying stats suggesting he could have had more.

The midfielder has 33 caps under his belt with the Brazil national team and has become a regular in the starting eleven under Tite. This level of performance led to West Ham emerging from a pack of suitors to acquire Paquetá in a sensational move.

Being linked with many top sides, it proved a shock for many that the midfielder did not end up at a Champions League team. The pull of English football is increasing year on year.

In this scout report, we examine Paquetá’s strengths through tactical analysis. The analysis highlights how he can bolster West Ham’s attacking performances and fit into their tactics.

Paquetá’s main position is the right-sided half-space as a No.10 in a three-man midfield.

The left-footed attacking midfielder prefers to line up in the No.10 position but has been used across the midfield and even as a striker last term. Paquetá is an all-action player, comfortable in multiple roles which provides his manager with great tactical flexibility.

His primary duties on the pitch are to serve as a creator for his teammates as well as to keep the ball rolling in the middle of the park. He has emerged as one of Europe’s finest in the creative role behind the striker.

The 25-year-old averages 9.25 progressive pass receptions per 90, placing him in the 93rd percentile. It’s clear that West Ham’s new No.11 won’t hide and will always make himself available for passes from the defence or deeper midfielders.

In possession, Paquetá is an exceptional ball carrier and will bring West Ham someone that is able to glide through challenges and progress the attack. At pace, he’s comfortable absorbing pressure from the opposition with good upper body strength and positioning to shield the ball.

In addition, he ranks in the 98th percentile for through balls, attempting 2.36 per 90 minutes. He possesses that Brazilian flair and is regarded as a risk-taker in the final third, much like a Bruno Fernandes-type of player.

On the defensive end, his pace and anticipation ensure he’s effective in regaining possession with 0.56 recoveries per 90. He is very aggressive in closing down opposition, ranking in the 94th and 99th percentiles for pressures and tackles respectively among attacking midfielders.

Lyon were one of several teams in France who liked to keep control during possession and win it back quickly. West Ham under David Moyes are quite the contrast with a strong counterattacking style and a tendency to defend deeper.

The individual pressing numbers will lessen, but it’s reasonable to think Paquetá will still make a positive impact while in a settled defensive block, especially with a quality midfielder like Declan Rice to clean up any of his missed defensive gambles.

As a No.10, Paquetá generally operates between the lines, looking to receive balls from deep. He has a high awareness of where the spaces are and swiftly glides into the marked area to open up the passing lane. 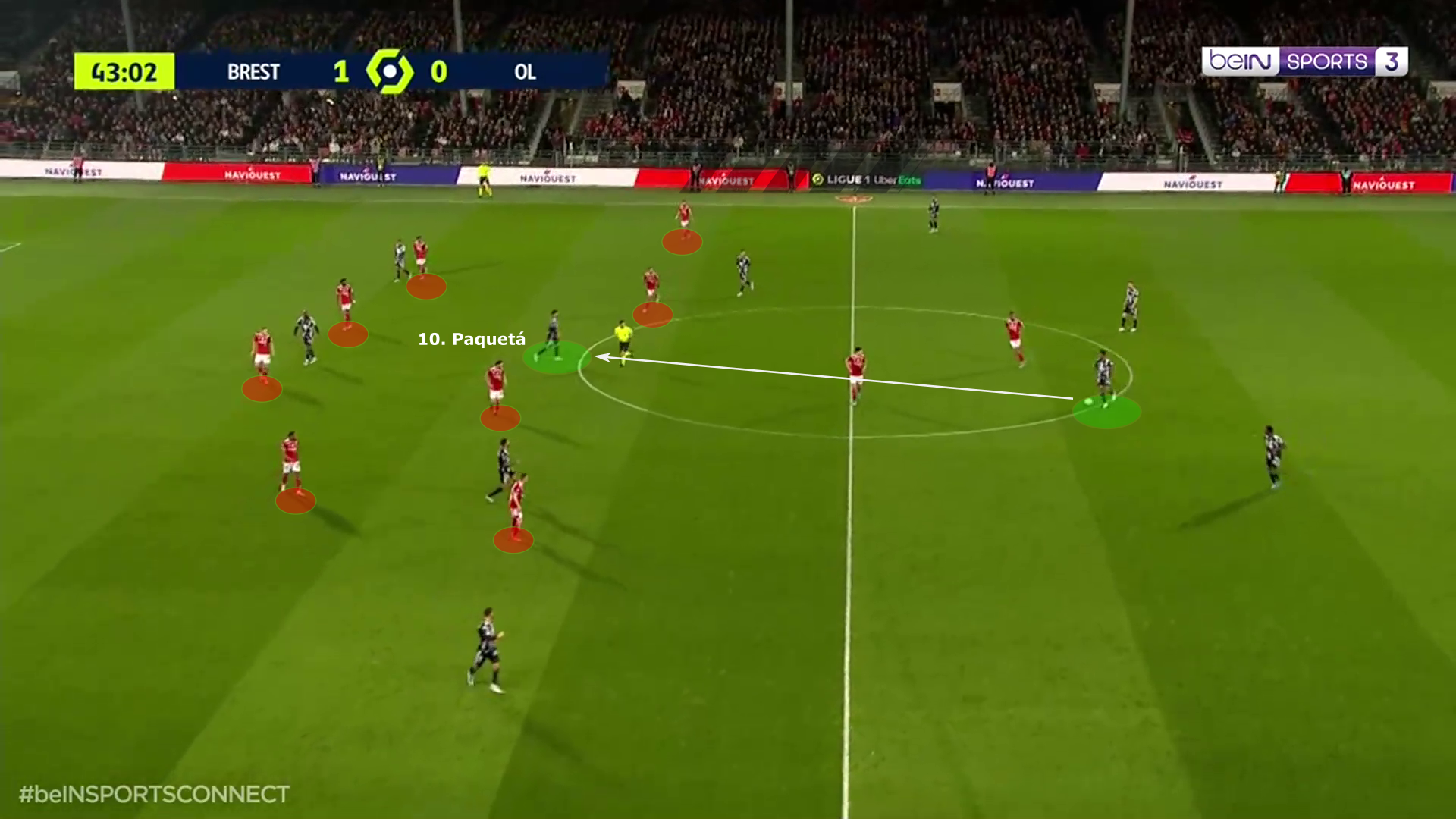 Once he collects the ball between the lines, he possesses the agility, balance, tight control and dynamism to either burst forward on the dribble or clip balls in behind/over the top for runners to chase. 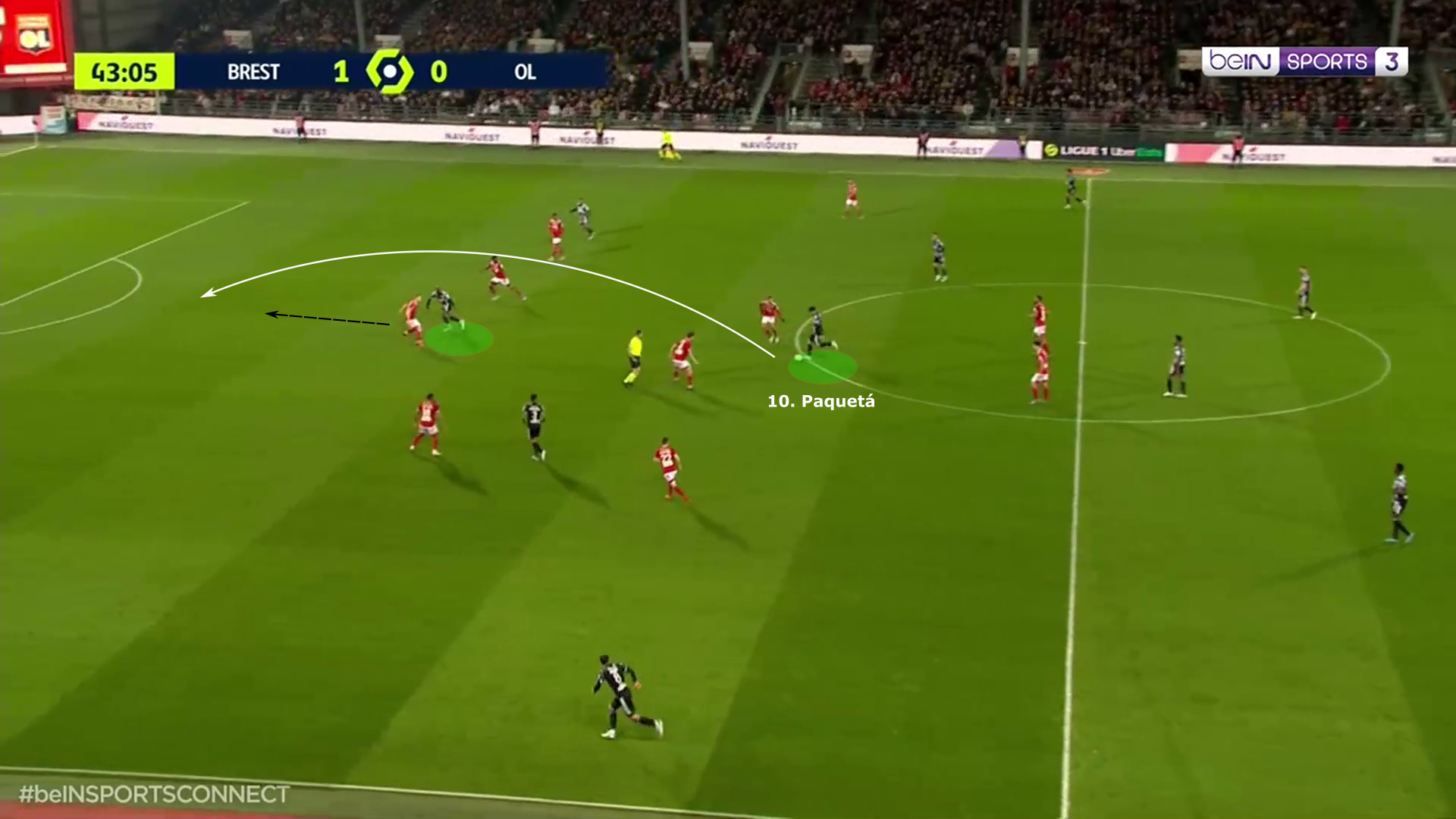 Paquetá’s overall accuracy with passes to the penalty area is not very high (41.49%), but what is significant is his ability to provide smart passes to consistently produce shooting opportunities. 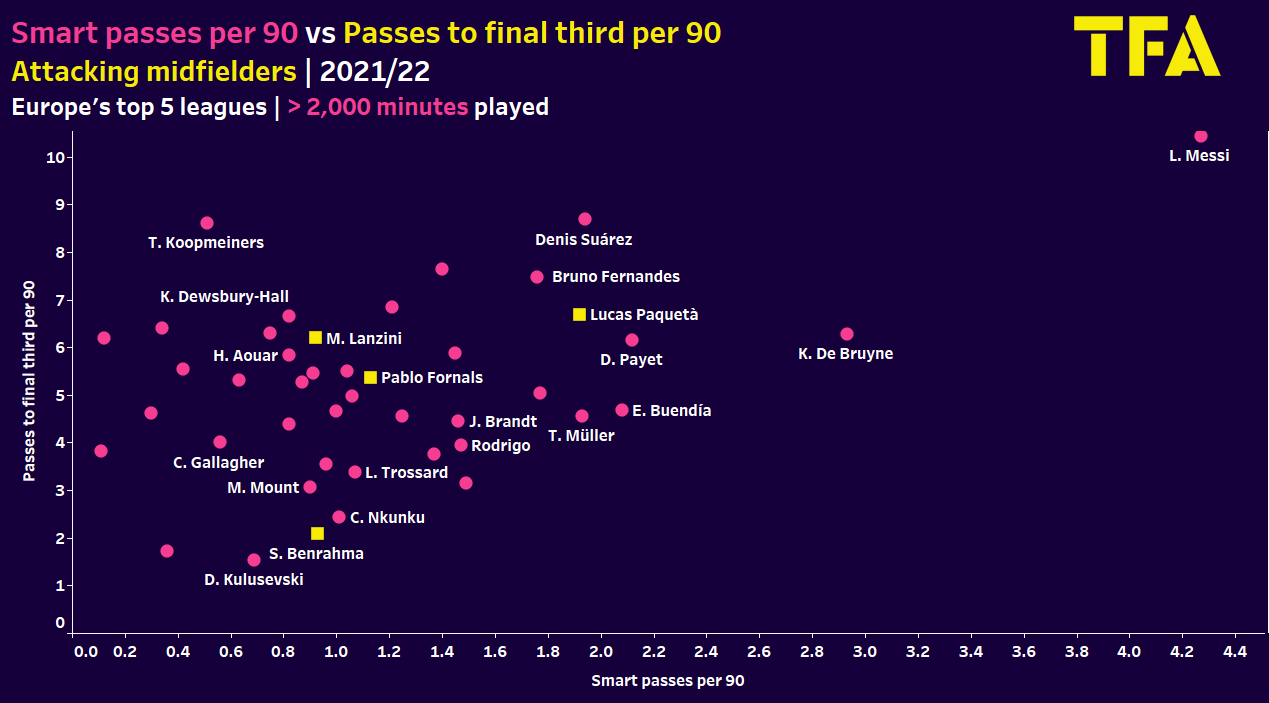 In yellow, we can see the current West Ham options that can play in Paquetá’s position – Pablo Fornals, Manuel Lanzini, and Saïd Benrahma. Lionel Messi is in a league of his own, but it is obvious how direct Paquetá is and how involved he is in picking out the final pass.

This will enhance the potency of attack for West Ham as the stats show he is an upgrade to what they already have.

When opponents set up in a low block, Paquetá often drops deeper to participate in the build-up phase and get some touches of the ball. He can still be as creative and effective, looping incisive long balls towards the flanks or in behind. 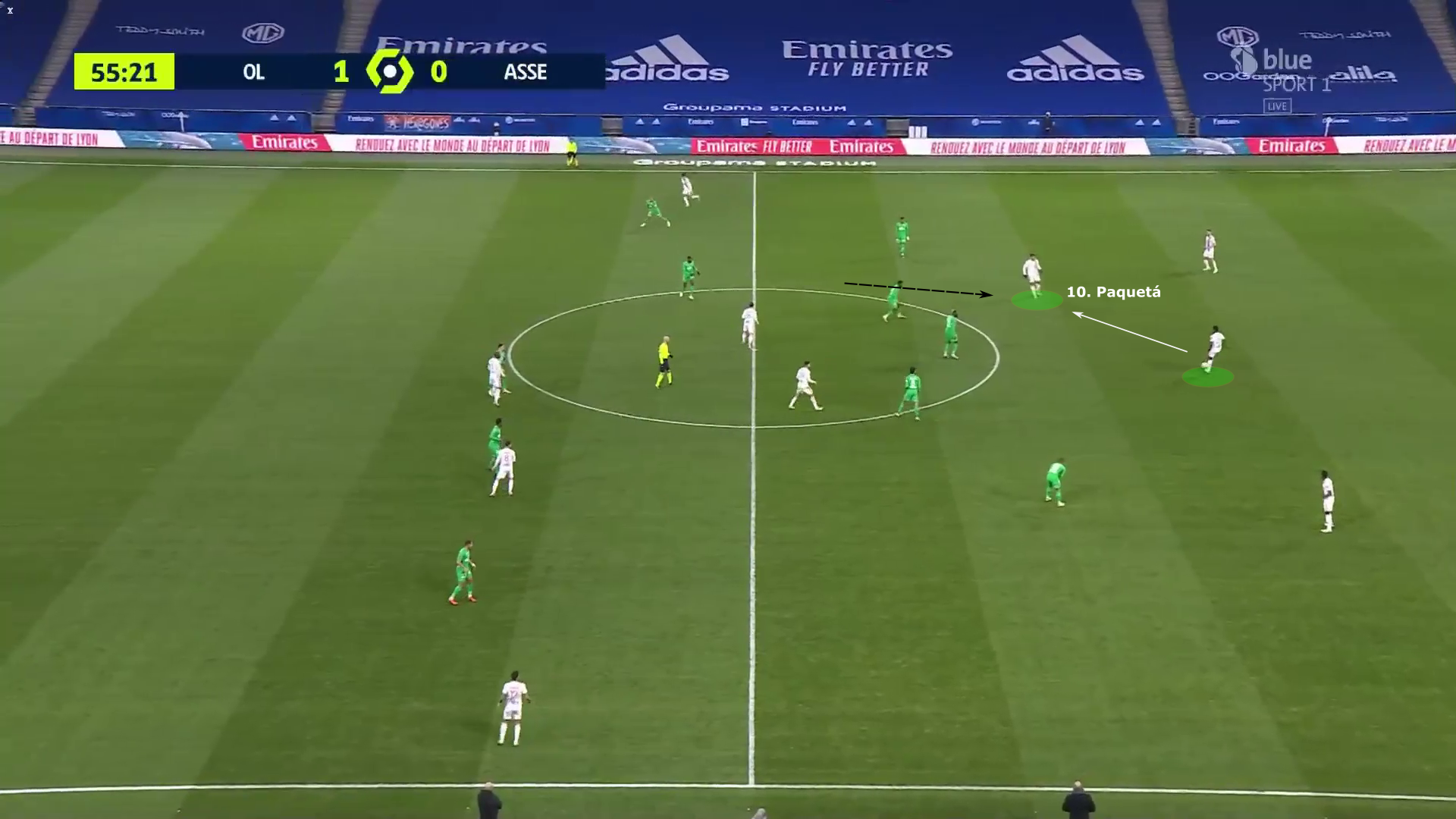 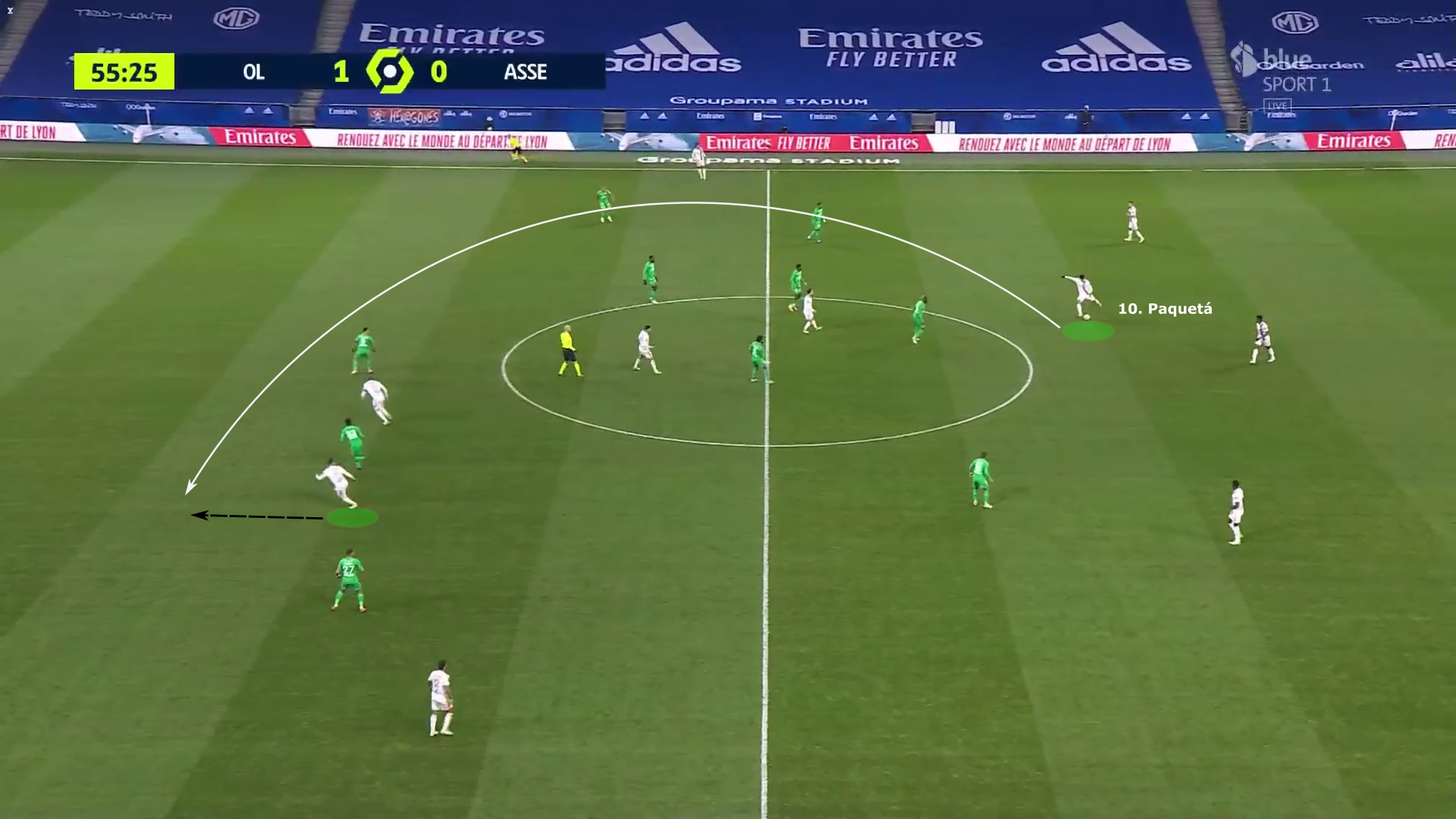 Paquetá scored 11 and assisted 6 goals in all competitions for Lyon last season. A player of his quality should be aiming for double-figure assists per season. Despite attempting a high number of through balls, key passes, smart passes and passes into the penalty area, Paquetá’s xA is not very high compared to attacking midfielders in Europe’s top-five leagues. 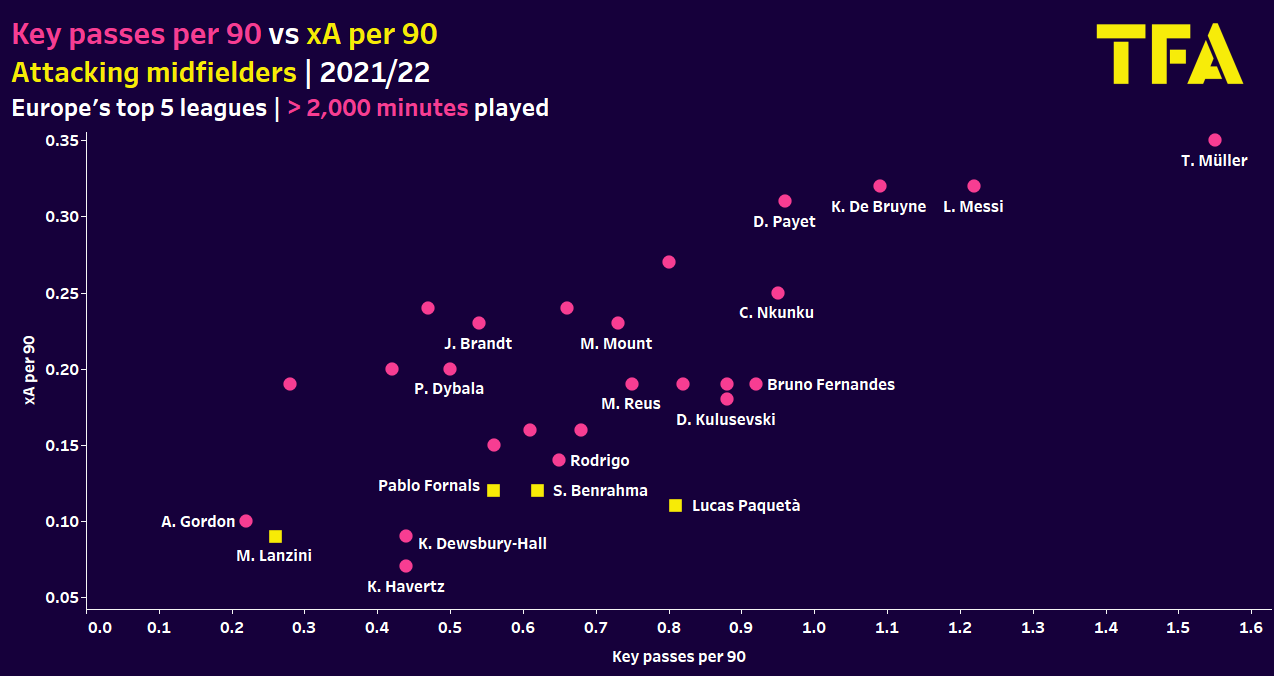 Another area which also requires improvement is his deliveries from crosses. The playmaker takes good positions around the opposition box but boasts a 35.7% crossing accuracy per 90. Forward Michail Antonio and Gianluca Scamacca will be hoping Paquetá’s crossing improves as they are players who thrive from deliveries into the penalty area.

Paquetá is difficult to control as he rotates between the deep-lying and advanced midfielder positions, which enables him to drift into areas to shoot outside the area unopposed consistently. Last season, he took an average of 2.53 shots per game. He generally does tend to settle for some low-value shots.

In terms of dribbling, the new Hammers signing has a strong dribble volume and success rate –  averaging 4.88 dribbles per game, with around 55% of those being successful. However, he does not actually progress very far with the ball. He was only in the 29th percentile among attacking midfielders in Europe’s top-five leagues in progressive carrying distance last season.

Rather, he uses his dribbling and quick bursts of acceleration to create a bit of breathing room and set up a progressive pass attempt. 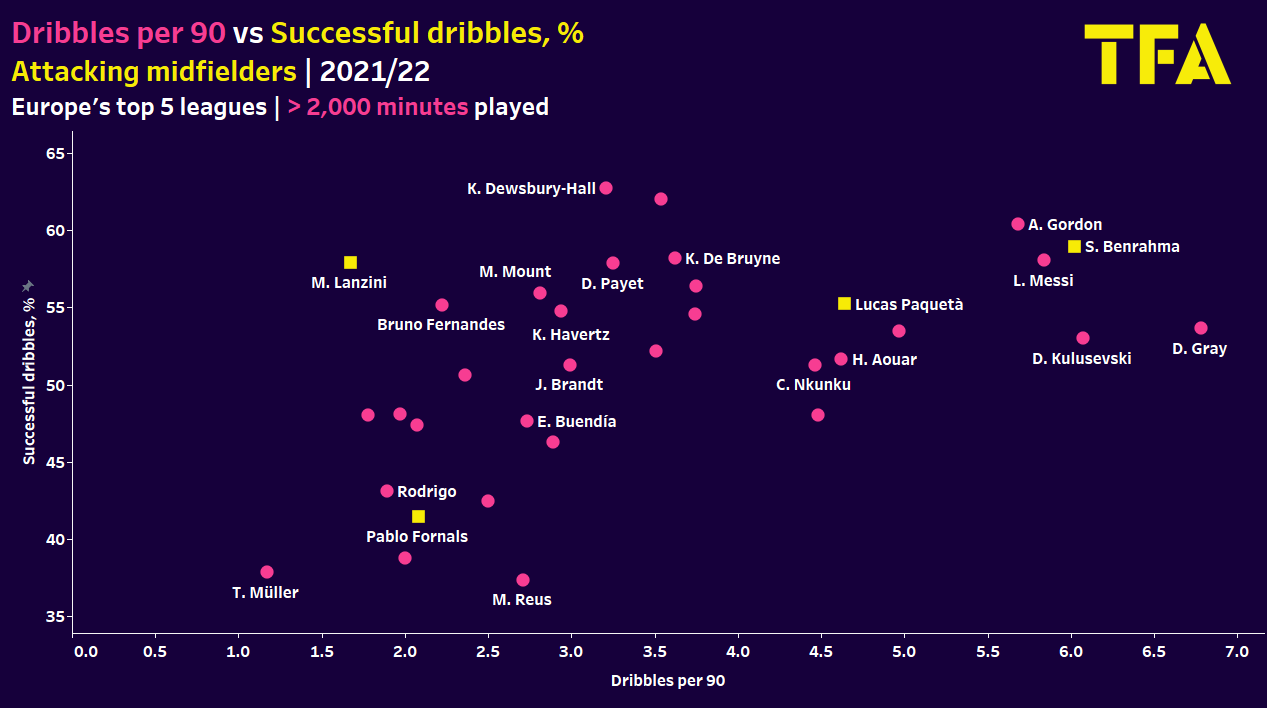 At times during the 2021/22 season, Paquetá was being deployed as a striker or false 9 under Peter Bosz.

He is a willing runner within the final third, with his best runs being straight line sprints within the channel once he got on the blindside of his marker(s). 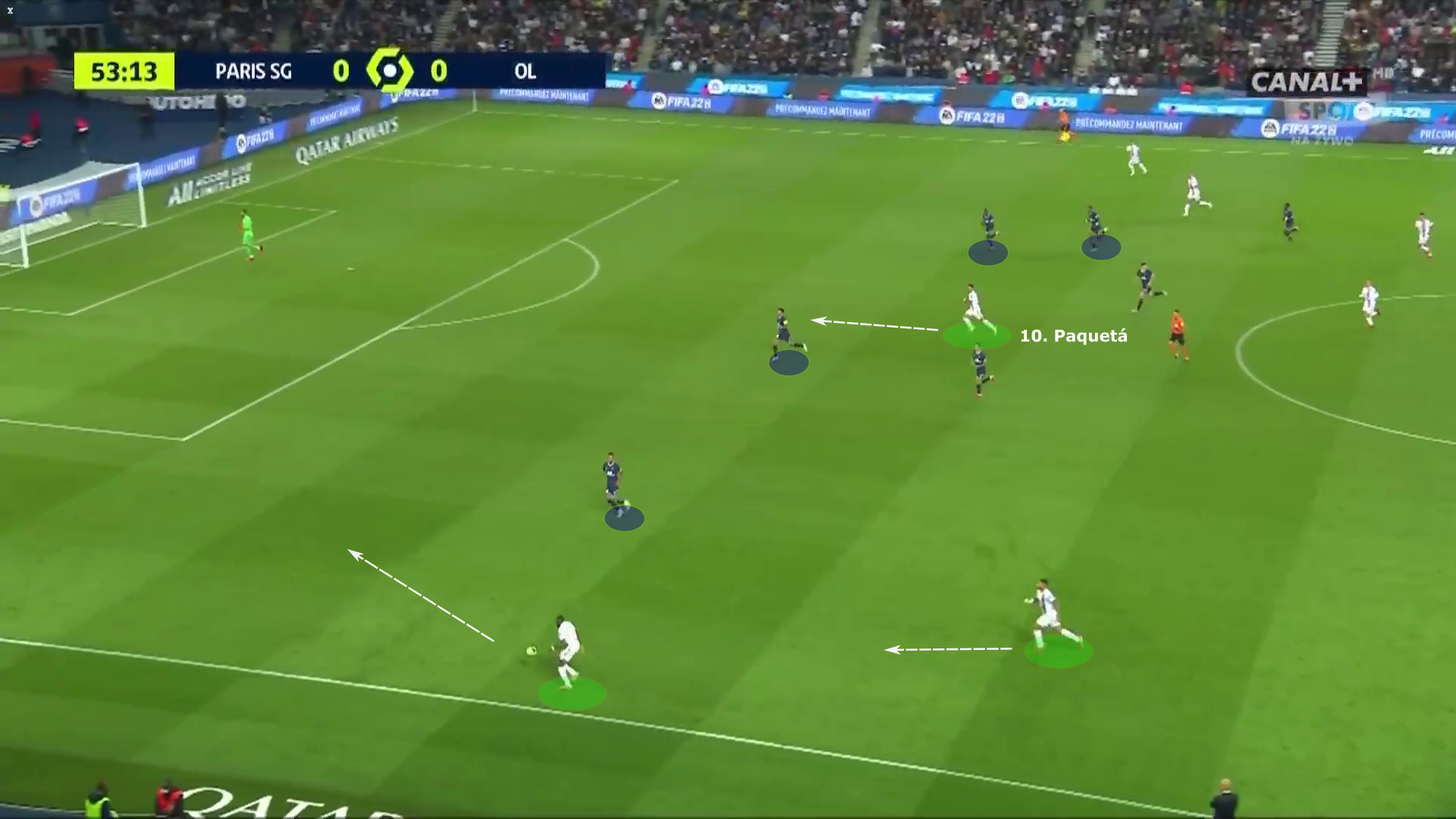 He makes his stride forward in between the PSG centre-backs. The run from the Lyon fullback keeps Hakimi and Marquinhos on their toes. 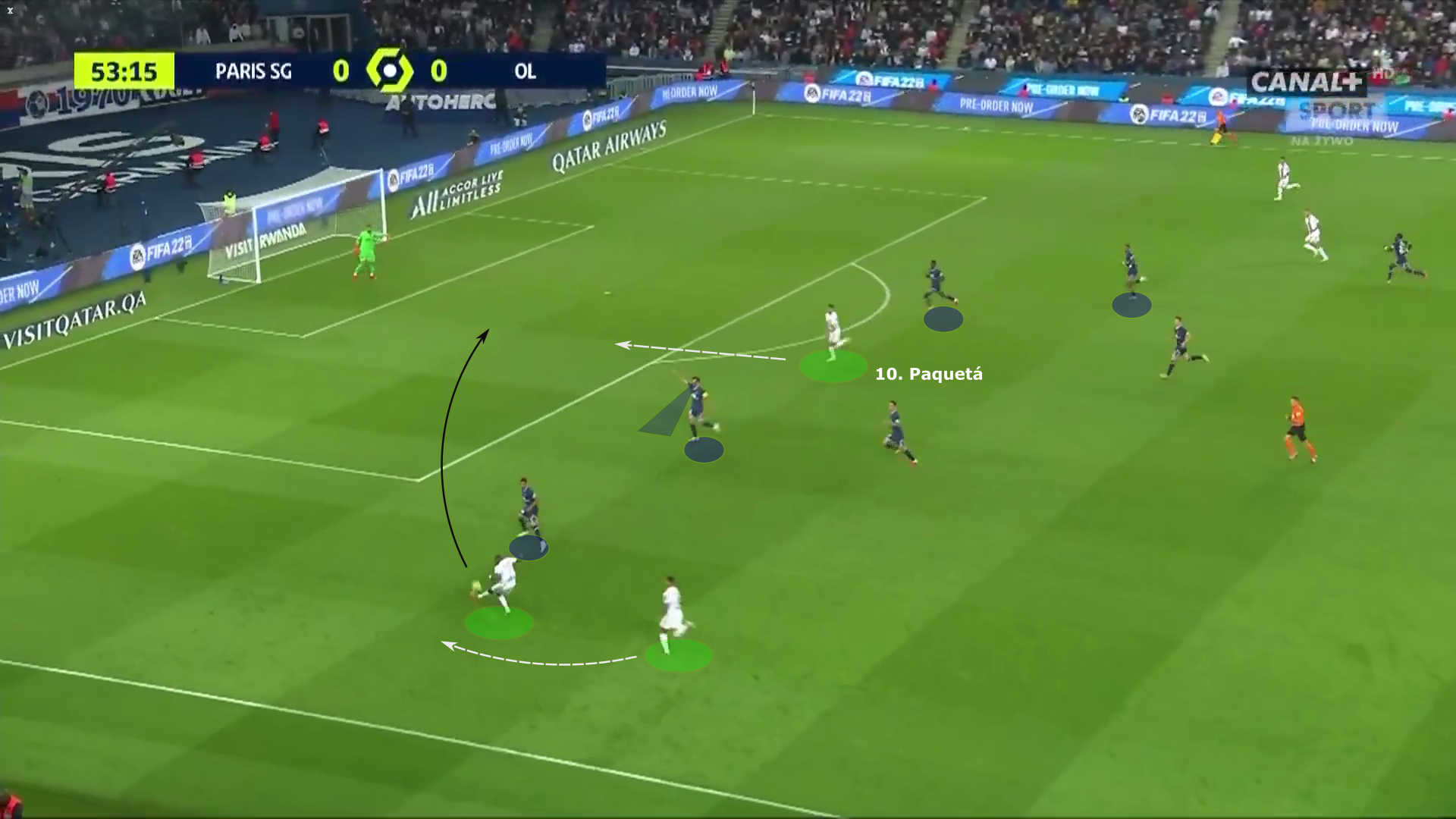 Marquinhos does not close down Paquetá himself, fearing the overlap pass to the fullback, and points backwards towards the midfielder. 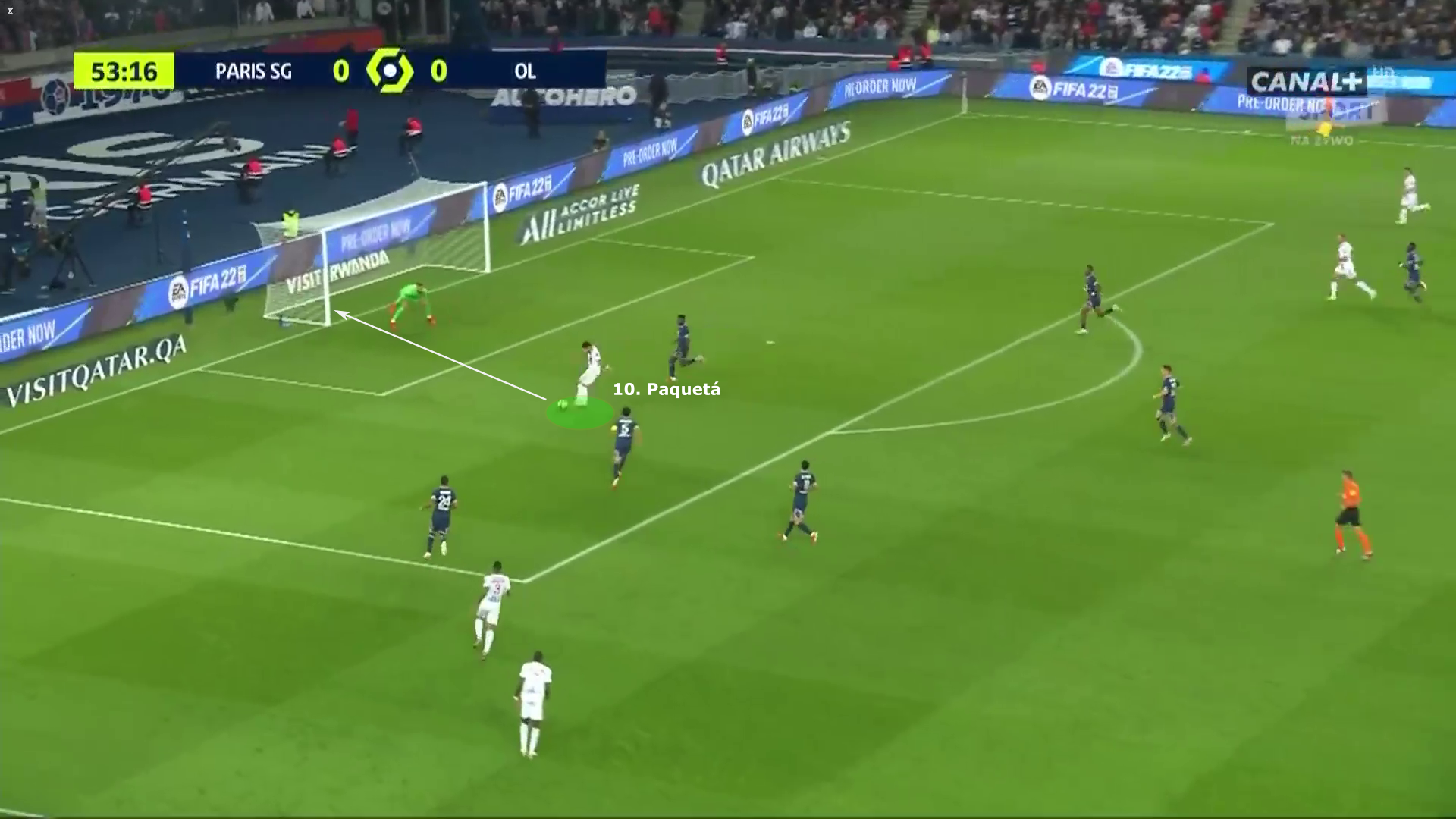 Paquetá outsprints the defenders and finds the bottom corner to give Lyon the lead.

Whilst an attack-minded player, Paquetá is very active in the opposition third as part of the first defensive press. He is highly effective in a counter-pressing system, looking to regain possession immediately after a turnover. He averages 6.07 recoveries and 2.61 interceptions per 90. 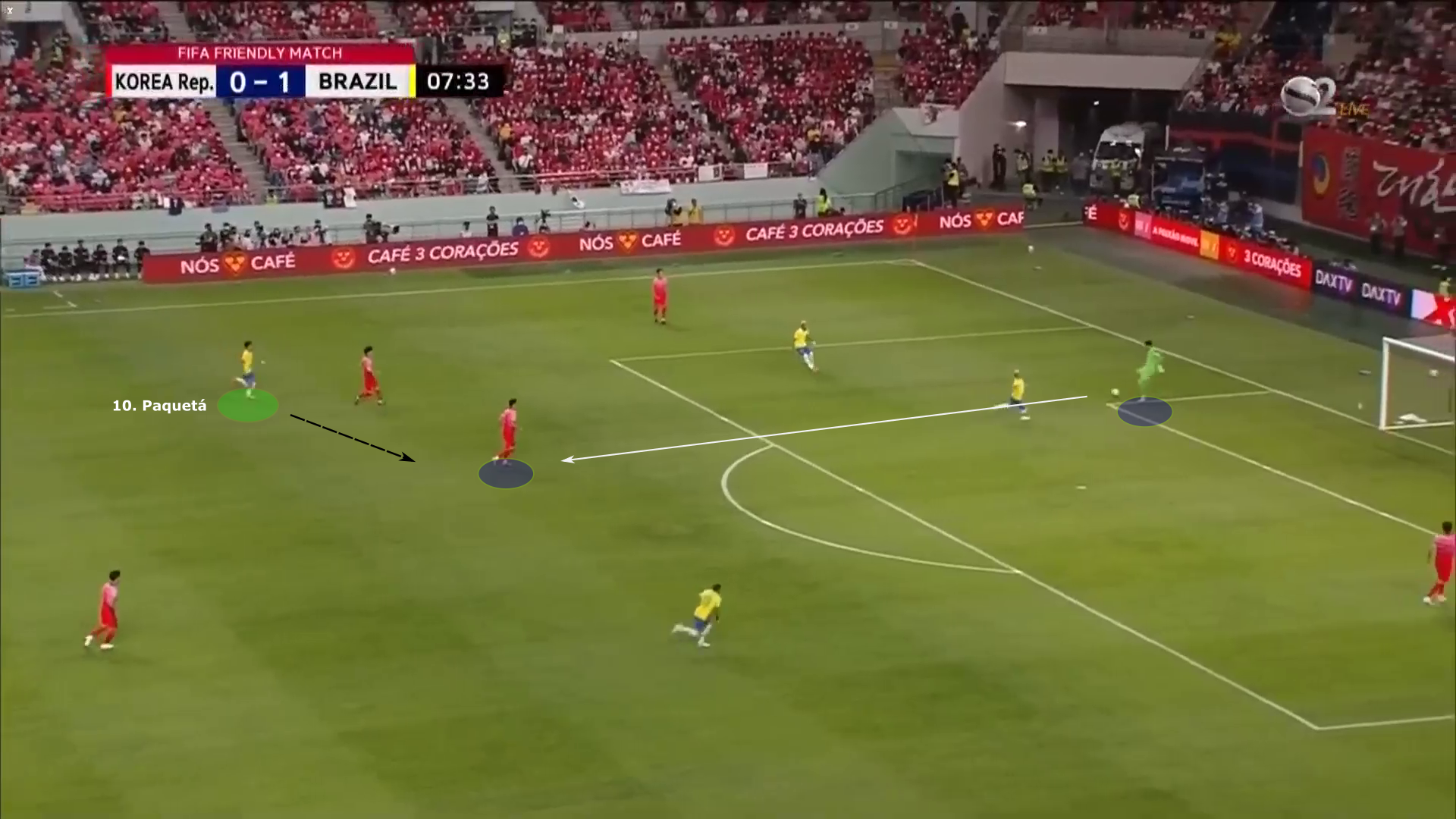 Brazil lose the ball high up the pitch. They instantly look to counter-press the opposition. 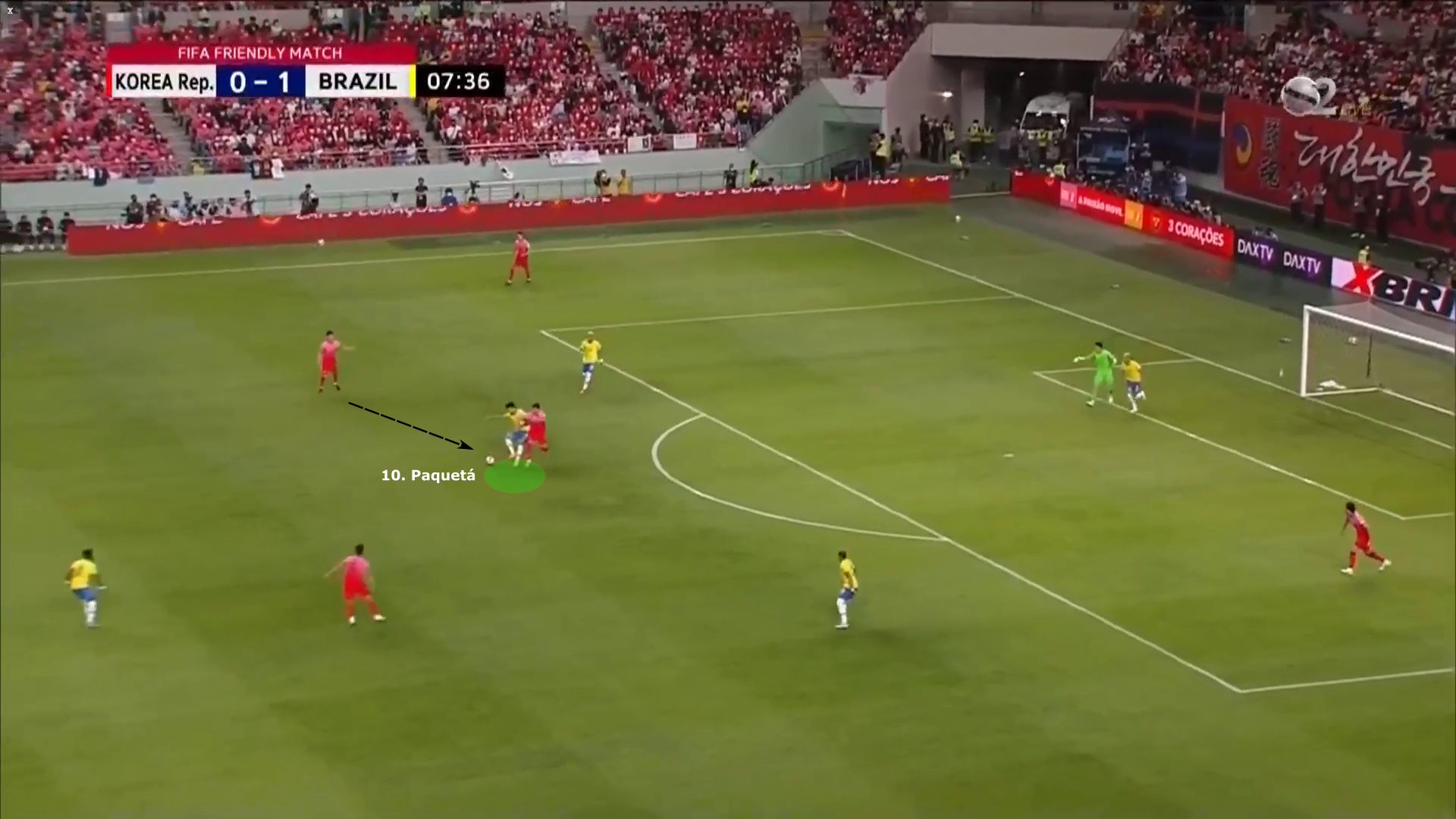 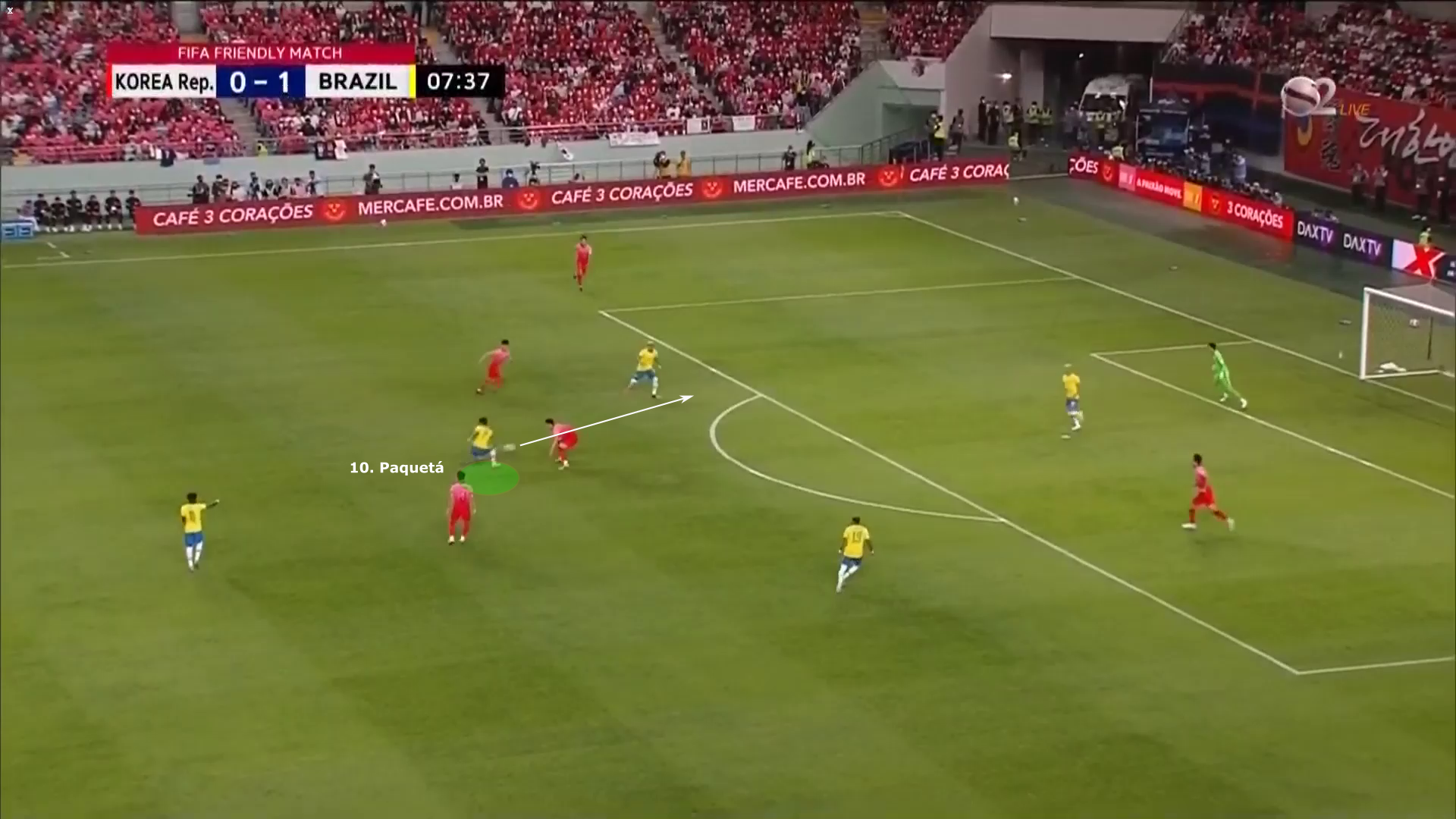 What makes him so vital in and out of possession is he starts the move by pressing hard and winning the ball back and finishes it off by threading a ball into his attackers.

Paquetá is very aggressive in closing out spaces on the flanks and chasing down opponents. He gets low when looking to dispossess opponents so he’s got a better chance of staying with the dribbler. Even when beaten initially, he’ll continue to chase and try to recover.

He attempts tackles from the blind-side of his opponents, ensuring that it is difficult for them to see him coming. 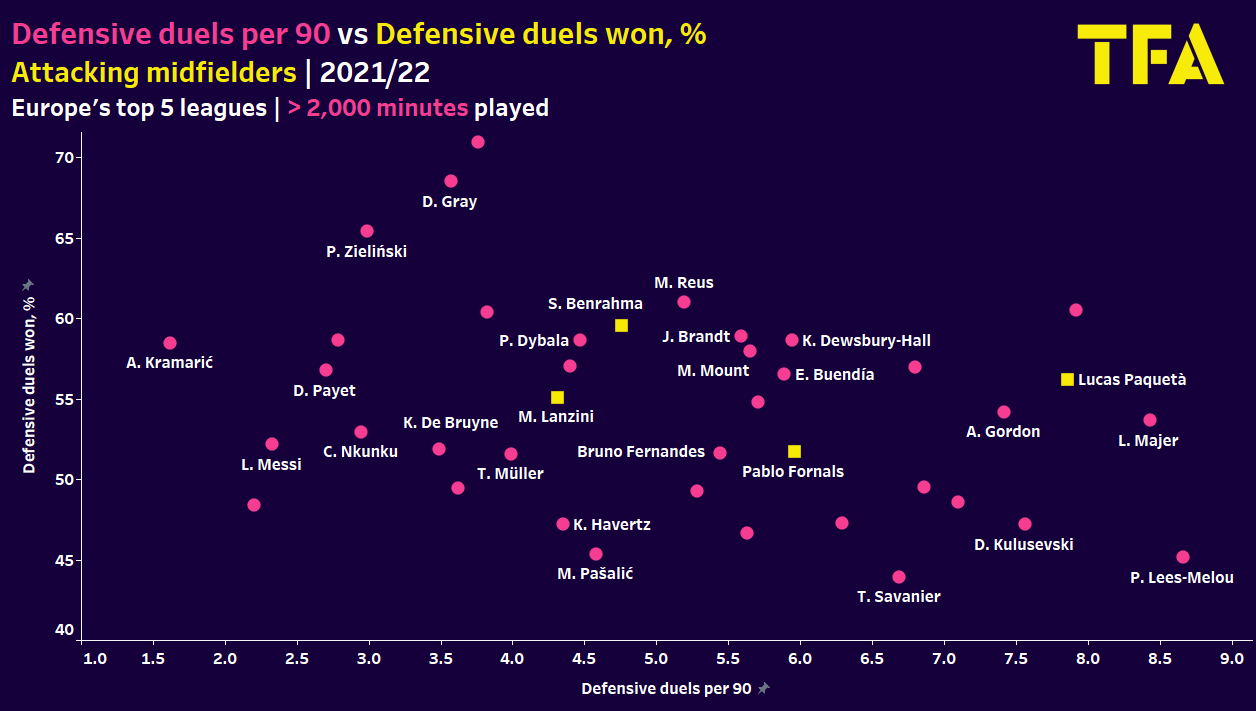 Paquetá is one of the best attacking midfielders in Europe in terms of defensive work rate and engaging in defensive duels, as can be seen above. This aspect of his game will give West Ham more legs in the middle of the park and chances to win the ball higher up the pitch.

Being the club-record signing will surely raise the pressure on Paquetá’s shoulders. Arriving into a new team and a new league without a proper pre-season is not straightforward. Fans will need to be patient and give the player time. Something that is not a luxury in the Premier League.

“He’s a very talented footballer and whilst he will need time to adapt to the Premier League, we’re excited about adding another proven international to our squad,” said Moyes.

Paquetá has learned how to be patient with himself after his failed spell at Milan, and has admitted to have taken advice from Neymar: “When I went through difficult times, Neymar told me that I had to be patient, that I was a great player.”

Lyon did go backwards in Paquetá’s time at the club, declining from Champions League semi-finalists to no Champions League football at all in back-to-back years. Last season under Peter Bosz, Lyon experienced its worst campaign in a quarter of a century.

For Paquetá, it was no doubt the ideal time to leave. The club was no longer matching his ambitions, with the sale of Bruno Guimarães to Newcastle last season to going back to former players in the form of Alexandre Lacazette and Corentin Tolisso.

With a demanding Premier League season and a World Cup on the horizon, Paquetá has a huge year ahead of him on the grandest of stages.