Lindsey Horan has been one of the United States national team pillars in the last few years as well as being one of Portland Thorns’ most reliable and valuable players in the last four NWSL seasons with plenty of goals and assists in her career so far. Most of her goals were scored for her national team and for Portland Thorns and with a lesser degree for Paris Saint Germain since she had a four-year experience at the French capital during which she scored 46 goals and was an important squad player. Her experience in Europe at an early age helped her become a more mature player since she had the opportunity to play against teams like Lyon in Division 1 Féminine and in UEFA Women’s Champions League as well even though she didn’t face teams like Barcelona, Bayern Munich or Chelsea at that time.

In this tactical analysis scout report, we will explore the main traits of Horan while focusing on her attacking contribution with Portland Thorns and the USWNT. Moreover, ahead of the Olympic games participation, it would be beneficial to study how Horan is a fundamental and very impactful player for her national team’s tactics from different perspectives.

Horan is naturally a central midfielder who combines between attacking and defensive roles since she has the physicality needed for defensive duels and the skills for helping in playmaking and being efficient in the build-up. But what distinguishes Horan from other midfielders is her excellent attacking abilities and finishing skills which allow her to give a plus to any team she plays at.

As you can see in this heat map, Horan covers almost the whole pitch as she is a dynamic player who retreats to defend when necessary and moves a lot without the ball upfront. Moreover, she advances a lot to the final third and we also find her quite often inside the box either waiting for a pass or penetrating with the ball by herself. And both in Portland Thorns and the USWNT, she is used as a left midfielder yet she is given the liberty to advance more than the other midfielders given her attacking efficiency. 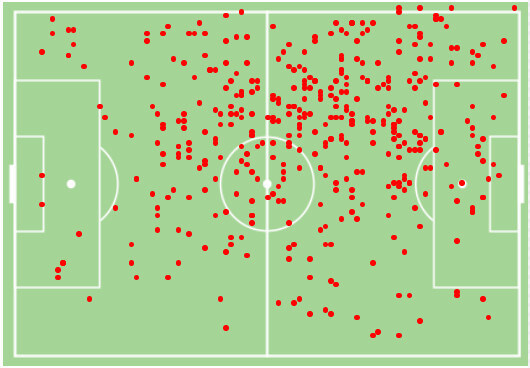 Horan’s playmaking skills are excellent and this has been proved continuously by the 27-year-old midfielder whether at the international matches or in the NWSL. Her passes are often accurate and they create a lot of danger since we are not talking about just simple passes. Horan often gives passes that allow her teammates to aim at shooting by attracting defenders through her dribbles and penetrations before serving an unmarked teammate. This pattern has usually been fruitful for Horan and the teams she played at as it created a big number of goals.

As you can see below, Horan here intended to attract her marker to dribble past her and give the opportunity to her teammate to be unmarked inside the box before passing to her and creating a goalscoring chance. 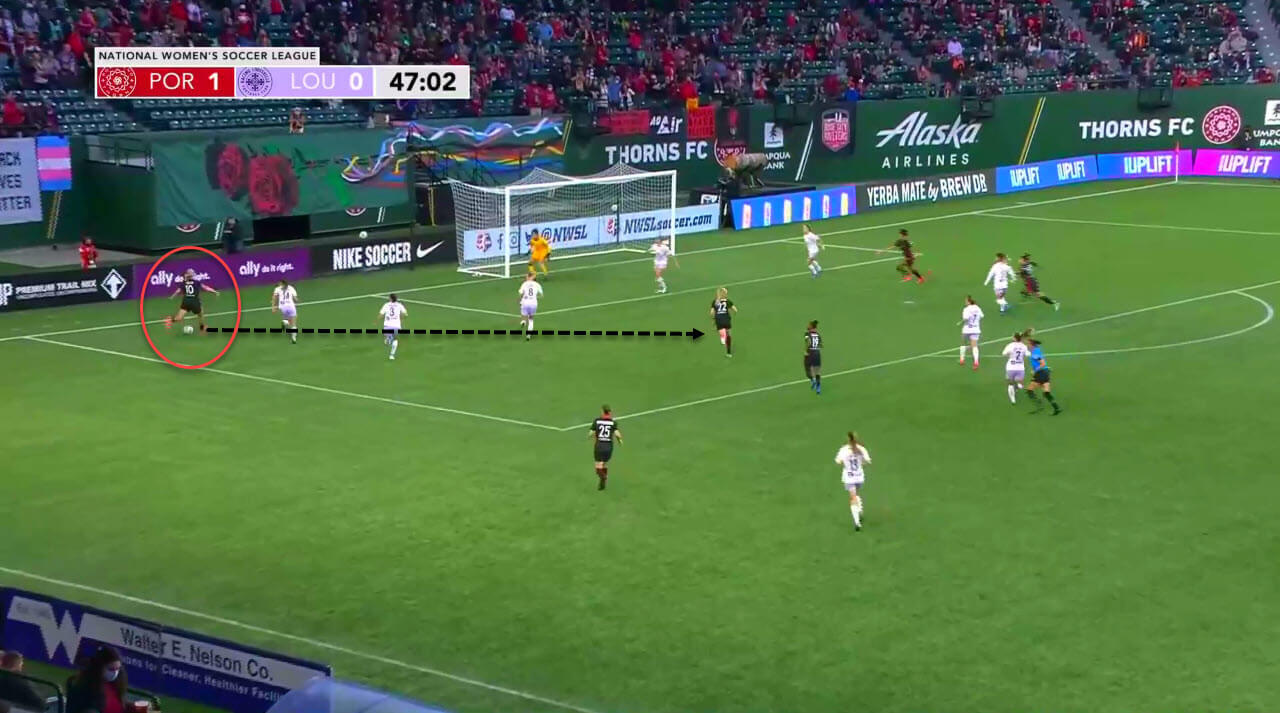 In addition, it is quite remarkable that Horan often leans to the wings in order to find more space to dribble and create opportunities by running down the wing even though this is not her natural position. Nevertheless, she is very good at that too and she does not find problems in crossing and giving assists from either wing since she has made several assists from the right-wing as well in her career.

Horan gave a lot assists from this side of the pitch as well and it is clear that she never passes without thinking thoroughly about what could her pass result in and whether her teammate would have the time and space to deal with it in a good way. This might sound very natural but it is at the same time so important at this level since not all players think about their actions thoroughly before executing them especially when it comes to passing. Yet, the ones who think and observe the situations meticulously before passing are the players who are efficient in this regard and in chance creation rates. 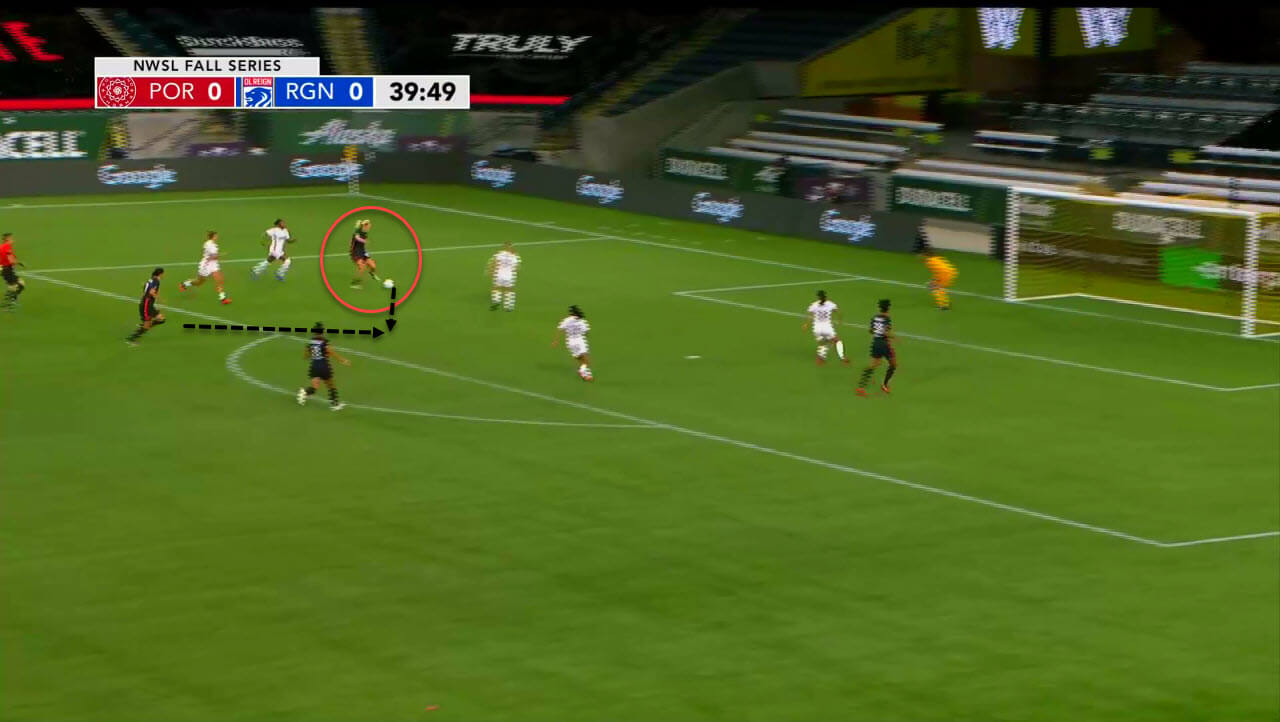 Overall, Horan’s passing accuracy is 80.8%, a rate which could be improved but it also does not give her enough credit for the excellent key passes that she provides continuously. These passes constitute a large part of Horan’s attacking value, efficiency and impact at the teams she played at.

Another fundamental aspect of Horan’s attacking impact can be found in her goalscoring abilities and contribution. In fact, Horan has always been involved in her teams’ attacking actions whether by passing or shooting. But the ability of being clinical in front of the goal allowed her to be an even more useful player when compared with other good midfielders. She shoots a lot on target whenever she gets the opportunity to do so as she knows how and where to direct her shots to confuse goalkeepers by using the adequate amount of power as well.

And perhaps the most recent Horan goal highlights exactly these shooting abilities since she was able to shoot the ball before it hits the ground while coordinating her body perfectly to give the ball the necessary amount of power to surprise the goalkeeper and not give her enough time to react. Moreover, what made this goal even more beautiful is Horan’s movement behind the defensive line as if she was a striker while Christen Press was the one who gave the assist. 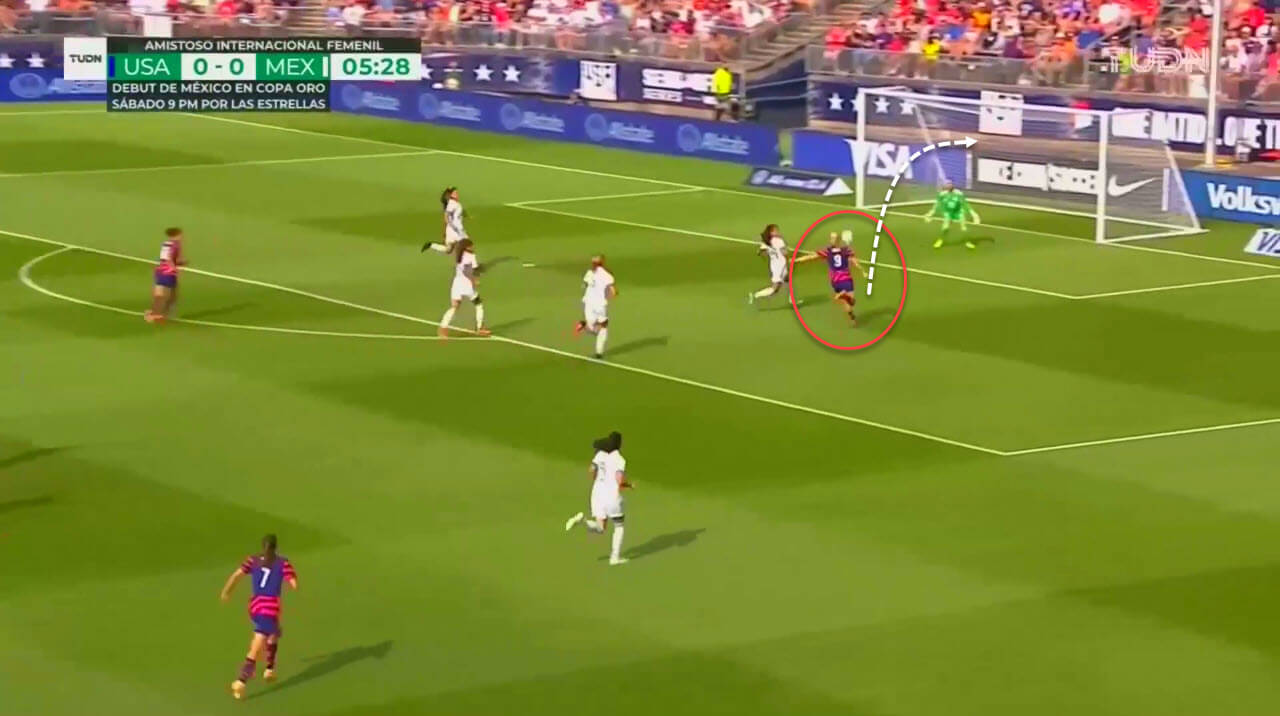 In addition to being able to act like a striker to surprise the defenders with her penetrations in attack, Horan is also a good set-piece taker who knows how to exploit free-kicks near the box. This is not only helpful for Portland Thorns in terms of exploiting set-pieces but it also helps the USWNT since Horan can be the best set-piece taker in the upcoming Olympics along with Christen Press and Tobin Heath. Therefore, we could see her scoring one or two free-kicks soon if she executes them like she did in this game against OL Reign. 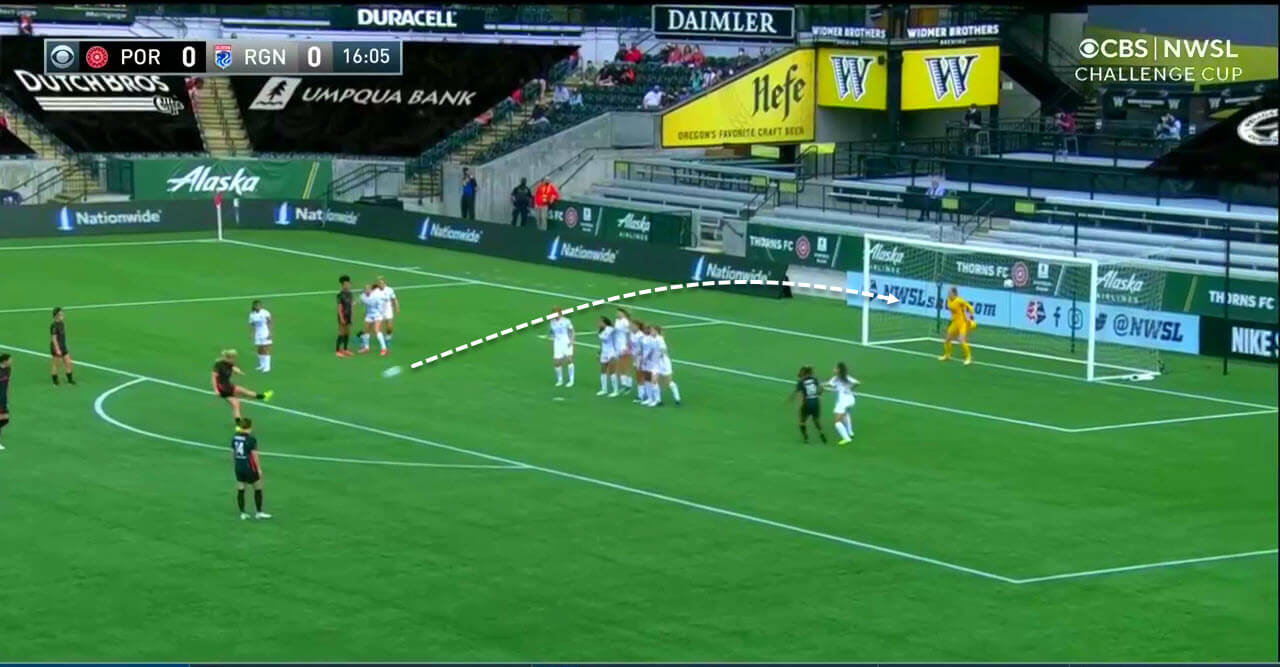 Once again, mixing between the characteristics of a number 10 player and those of a striker make of Horan a really special player. And by being usually clinical in offensive aerial duels and especially during set-pieces, she gave yet another good reason to prove that she is one of the best American midfielders at the moment. In fact, having the sense of the goal and coordinating her body quickly according to the ball movement even when she is a bit disturbed allowed Horan to score numerous goals with headers and volleys.

You can see in this example how she quickly decided to execute a diving header in order to score a beautiful goal from long distance, which shows Horan’s creativity and adaptability even in the way she scores goals. 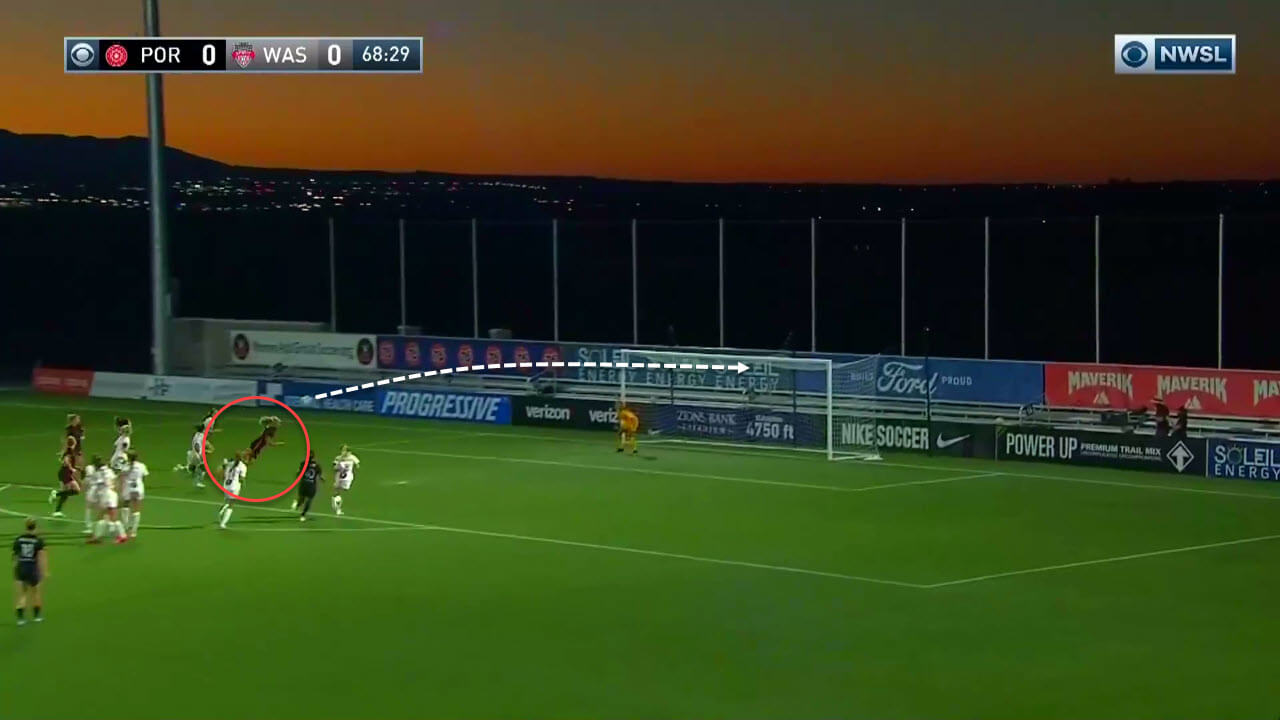 Another key element in regard to goalscoring is Horan’s ability to score with her left foot with almost the same accuracy as her strong foot. In the following goal we see how she was able to deal extremely well with the defenders surrounding her by dribbling and shooting between two defenders as soon as she saw the goal angle. In reality, Horan advances a lot more when she plays with the USWNT as she is given more freedom to move inside the box, which is why we see her more often inside the box with her national team. Moreover, the chemistry with Press, Heath, Megan Rapinoe and Carli Lloyd allows her to get more key passes and exploit them very well. 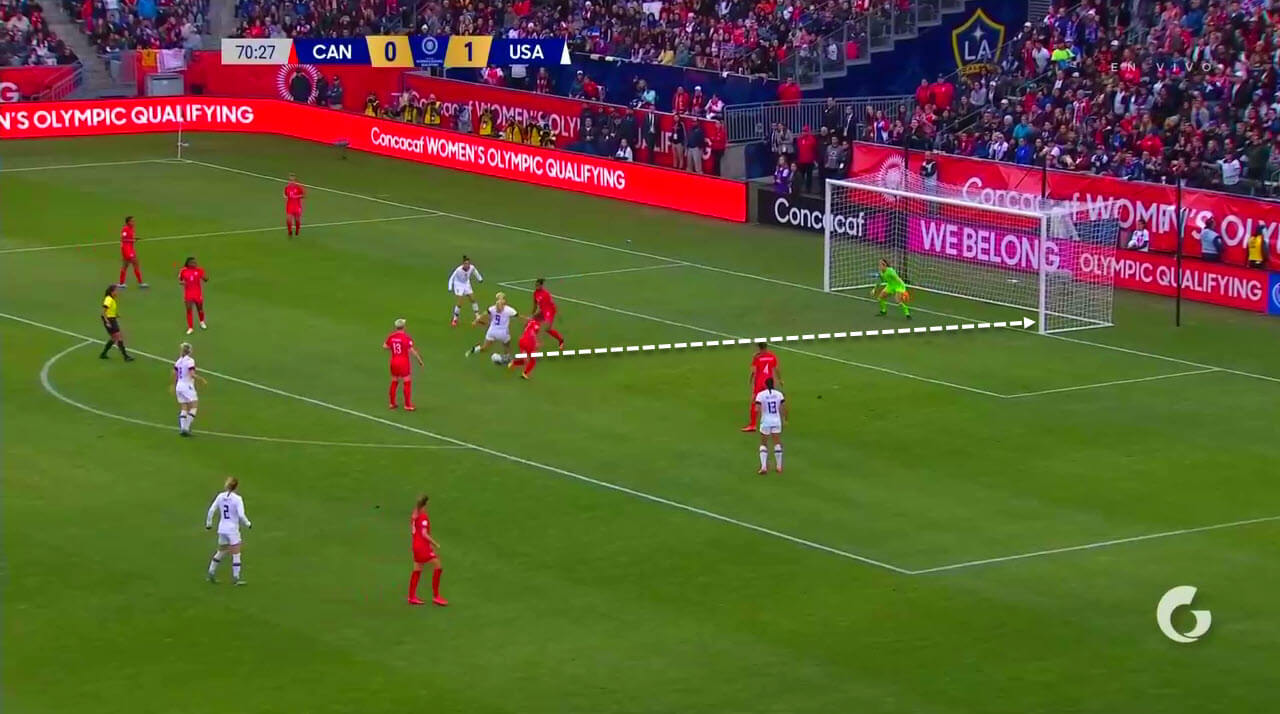 Horan will certainly play a huge role with the USWNT in the upcoming Olympics as she will also be fundamental for Portland Thorns as soon as she gets back with the team. She is one of the most special midfield players at the moment since she masters both playmaking and goalscoring with almost the same excellent efficiency.