The 2020-21 CAF Champions League Final saw Kaizer Chiefs take on defending champions, Al Ahly. While Al Ahly went into this match on the back of a thrashing win against their opponents in the Egyptian Premier League, Kaizer Chiefs last played a game against Wydad AC on 26th June in the semi-finals of the competition where they emerged victorious on aggregate.

Al Ahly were looking to defend their title and qualify for the FIFA Club World Cup like last season where they got knocked out against 2020-21 Bundesliga Champions, Bayern Munich. Kaizer Chiefs, on the other hand, were into their first-ever CAF final and looking to pull off an upset. This tactical analysis will feature how Al Ahly dominated the game using their tactics from start to finish and thrashed Kaizer Chiefs to clinch their 10th Champions League title. Let’s begin the analysis.

Kaizer Chiefs lined up in a 4-3-3 system as Stuart Baxter shifted into a more possession dominant system from a 3-4-3. But on the pitch, it was more of a 4-2-3-1 system with Baxter bringing in Mphahlele and Mashiane for Sasman and Siyabonga Ngezana. 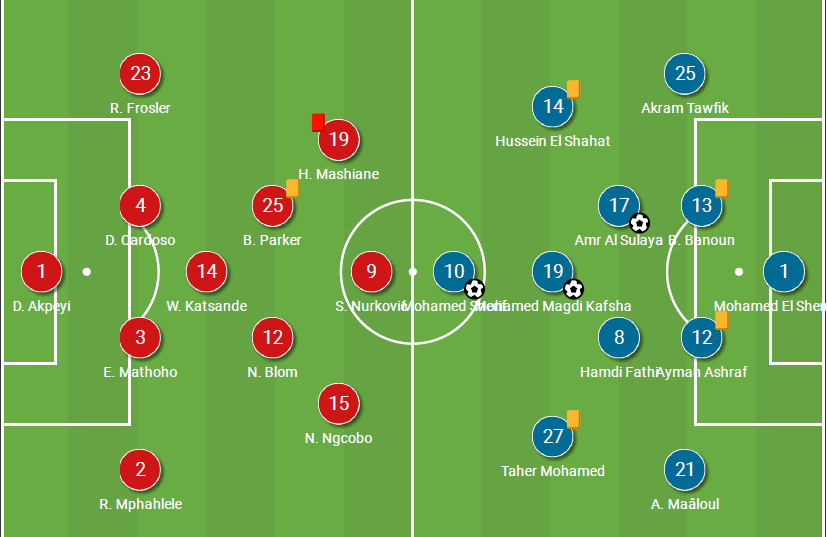 Al Ahly made one change to the lineup that beat Misr Lel Makkasa 4-1 last weekend with forward Taher Mohamed replacing Junior Ajayi. They went with a 4-2-3-1 system that often shifted into a 2-3-5 when they had possession.

Kaizer Chiefs’ thrive in low-block but exposed during high press

We saw that their formation on the paper looked like a 4-3-3 but on the pitch, it was pretty much a 4-2-3-1 with Parker often pushing higher up the pitch to start as a CAM. This was understandable given that Al Ahly went with a 4-3-3 system themselves and Al-Sulaya was deployed as the single pivot for most parts of the game and Parker now had just one job which was to closely mark the Egyptian. We can see that in the image below. 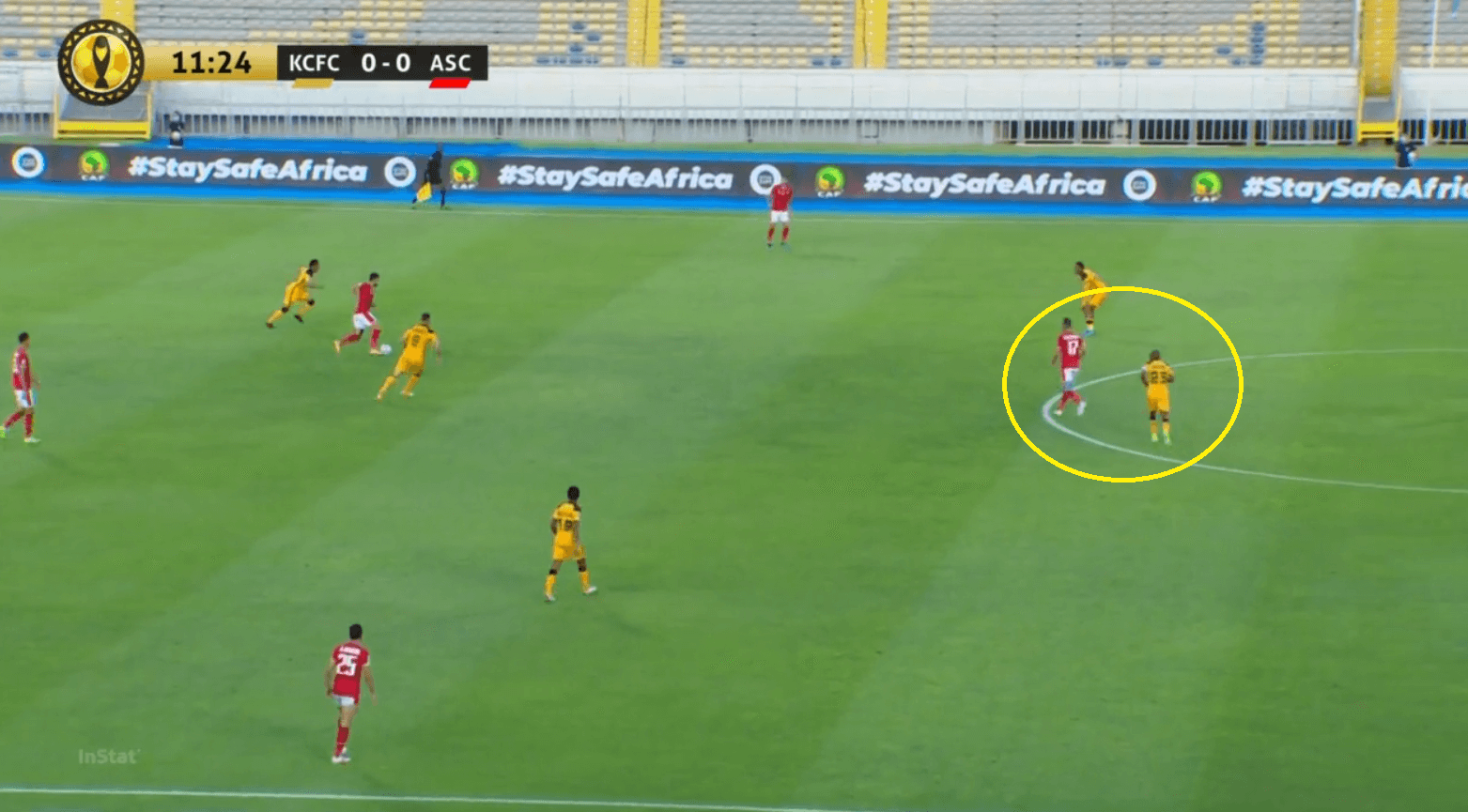 But Kaizer’s high press left a lot to be desired especially in a 1-3 shape when they were easily bypassed by the quality of passing from the Al Ahly CBs and midfielders. Also, it was partly down to their flawed pressing where they didn’t maintain the good orientation of their body and look to protect the space behind. This meant that they were able to play through the lines and move forward. We can see an example of this in the image below where the Kaizer Chiefs’ winger presses the CB using a curved run to block the passing lane to the full-back. This means that the inward passing lane is open to the central midfielders. Nurkovic, the striker, should have adjusted his positioning to maintain Al Ahly’ number eight in his cover shadow but he failed to do that and now their CB can easily pass to the midfielder. 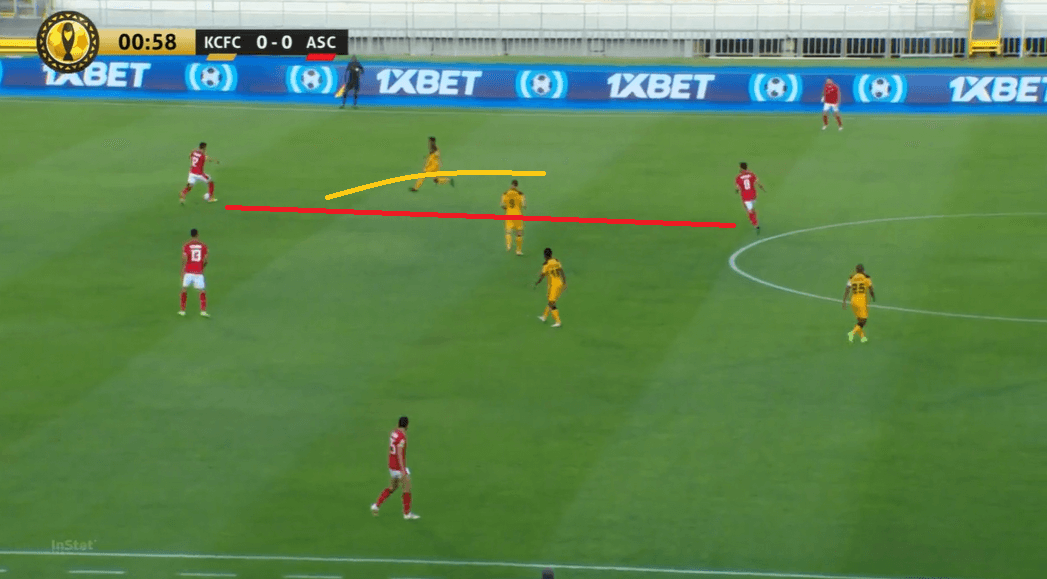 Another example of them not having a definite structure to press can be seen in the image below. The Chiefs’ right-winger keeps an inward body orientation while pressing to ensure that the midfielder behind him is in his cover shadow. But redundantly Blom also presses the same midfielder and the winger’s decision to come inward is of no use whereas he could have had an outward press to block the passing lane to the full-back on the wing who then makes a run into the final third after receiving the ball. 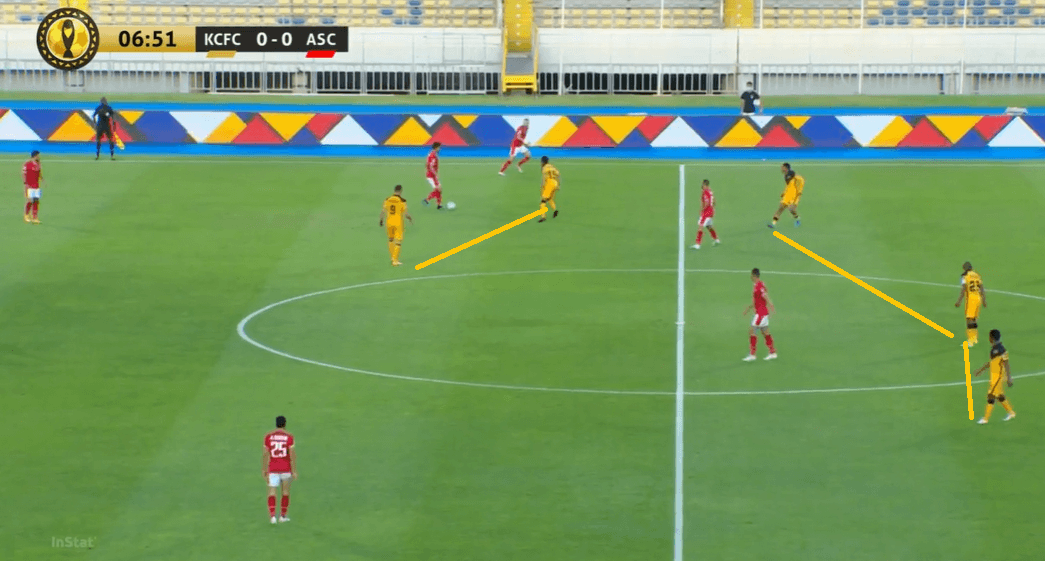 Soon when Al Ahly realised that a single pivot was being easily taken out of the game, they asked another one of their pivots to drop deep and went with a 2-2 or 3-3 shape building out from the back. The advantage of this was now they could overload the Chiefs’ CAM and he was put in a dilemma to mark which one of them. We can see an example of this in the image below where Parker marks the right-sided pivot. The left one is free now and he had to be taken care of either by the winger or the midfielder behind him. Both of them were again left in lack of communication as the winger focussed more on blocking the passing lane to the full-back while the midfielder stayed deeper waiting for the ball to be played to him while Fathi received the ball easily from the CB. 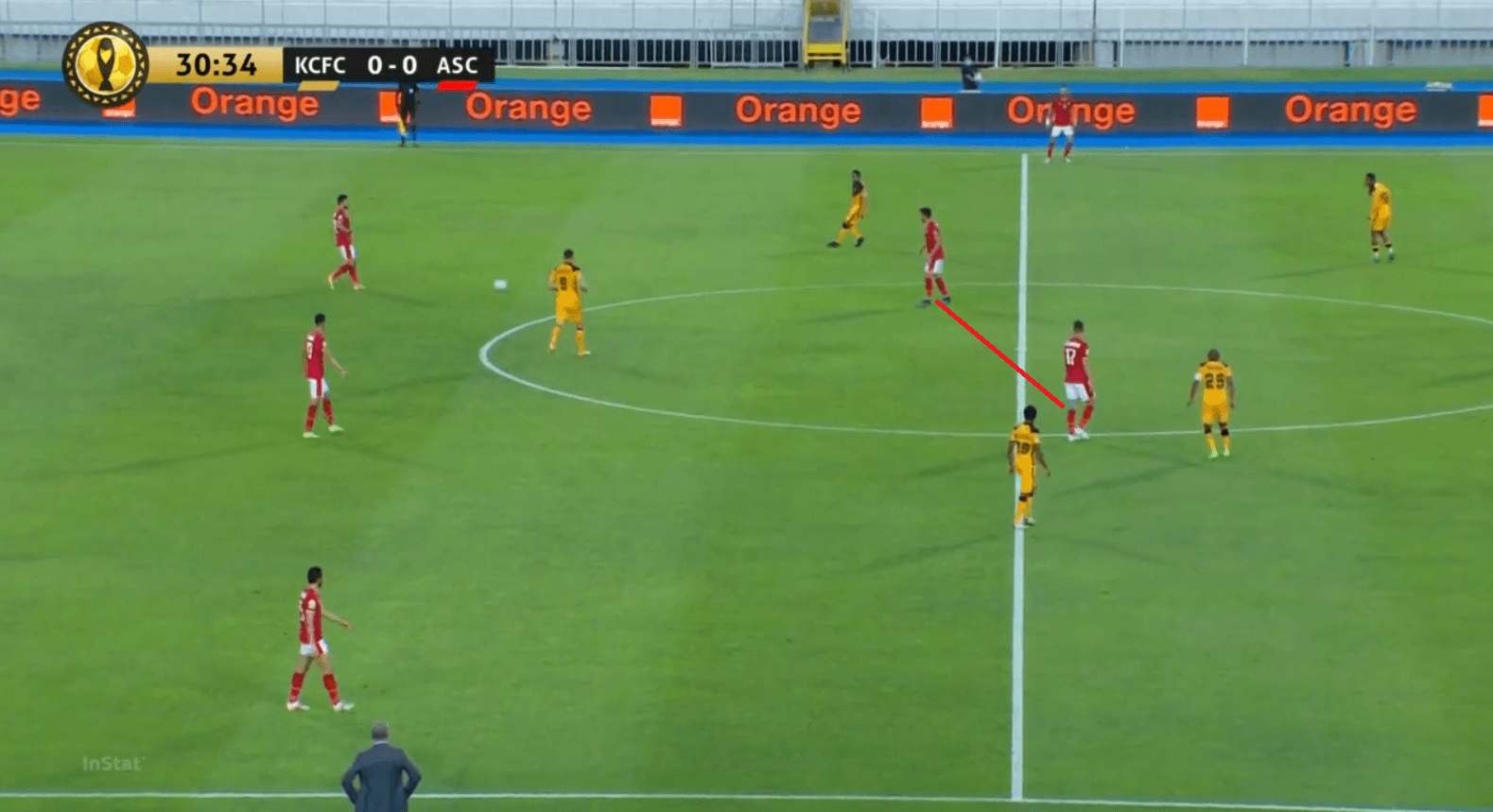 An ideal structure of their press can be seen in the image below which was rarely executed by them and occurred very little in the game. This structure in the example helped them to be compact in the middle while the winger’s body angle means he can also cut the passing lane to the full-back. 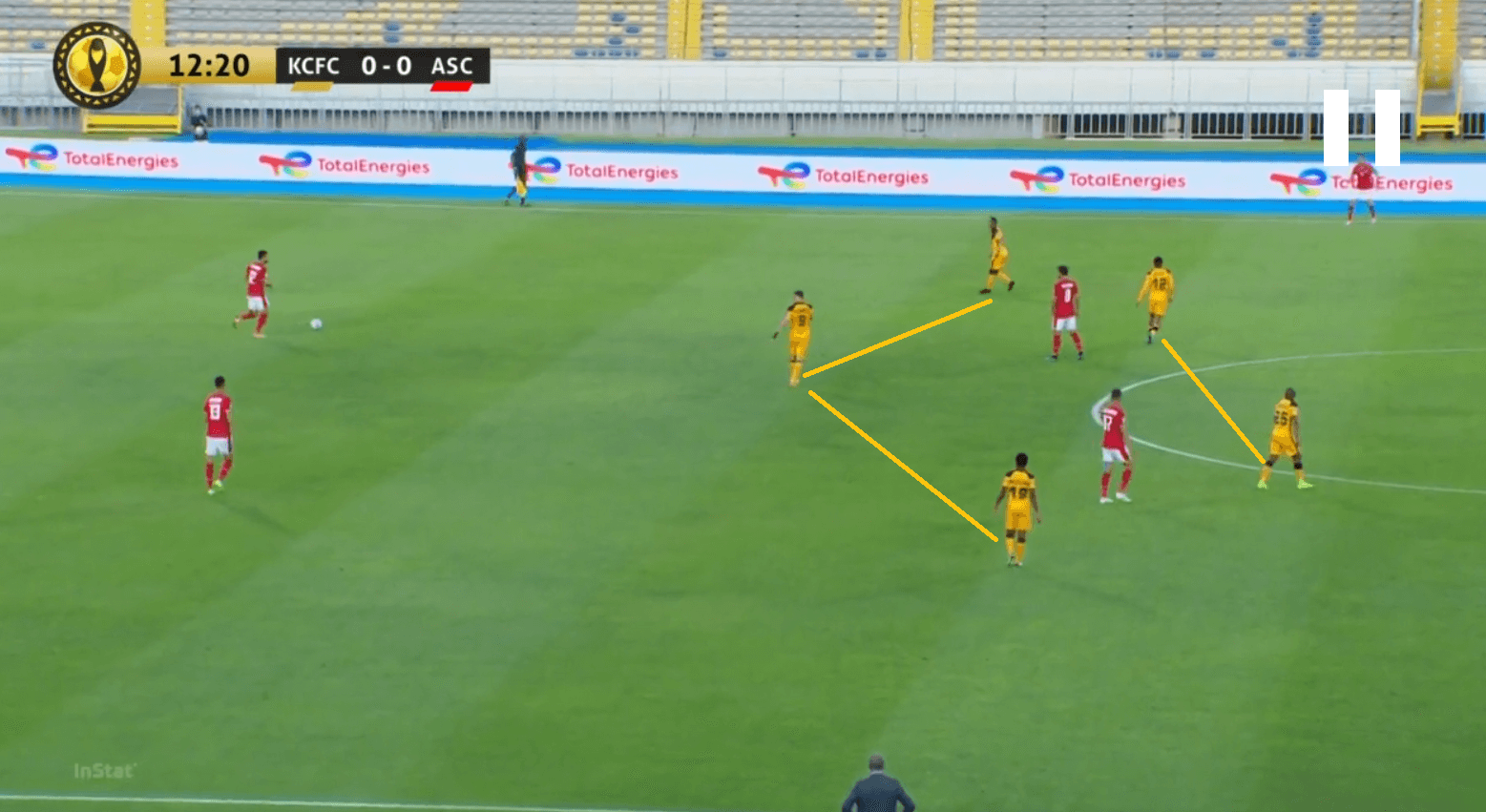 Though they had a very poor high pressing setup, their low-block defending was very good at least in the first half as they were able to block or clear most of Kaizer’s final-third passes. Most of Al Ahly’s final passes were crosses into the box and Kaizer Chiefs defenders did a very good job to head out of those. We can see an example of the Kaizer Chief defence getting behind the ball in numbers and settling into a non-penetrative low block. This meant that Al Ahly’s plan on the ball no matter what it was went fruitless for the first half. 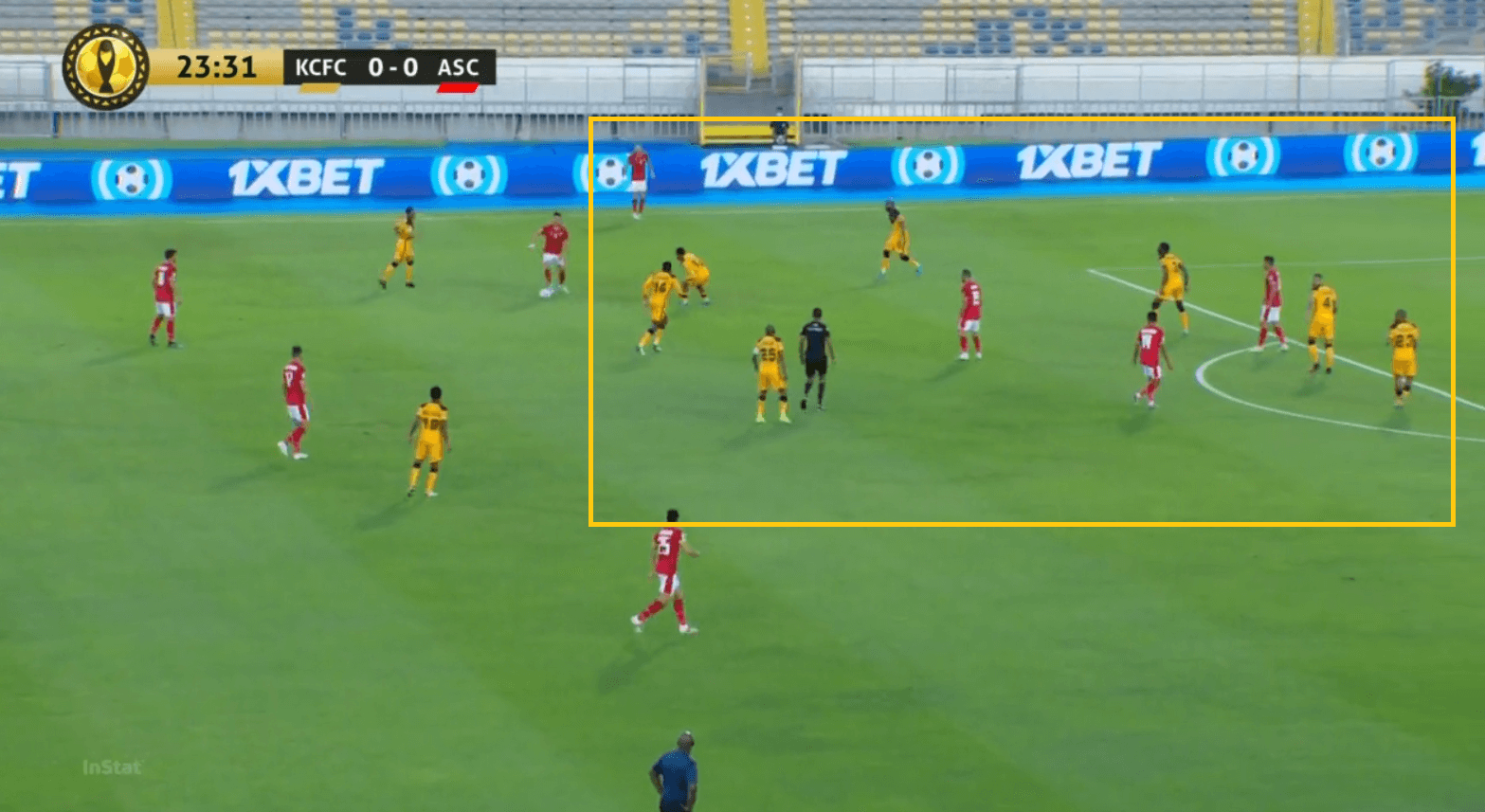 In most cases, their low-block would converge towards the centre with an intensity that saw the ball go nowhere but to the flanks. We can see that in the image below where the structure from the Chiefs is not very good but they were able to press with intensity and commit a lot of numbers to push the ball wide out to the flanks.

While Kaizer wanted to stay compact and defend narrow, Al Ahly were more than happy to let them use the flanks for progression. They formed triangles in the flanks to lure the Chiefs player to the flank and then move the ball up. We can see an example of that in the image below where they have formed a triangle in the pitch and are looking to progress the ball. 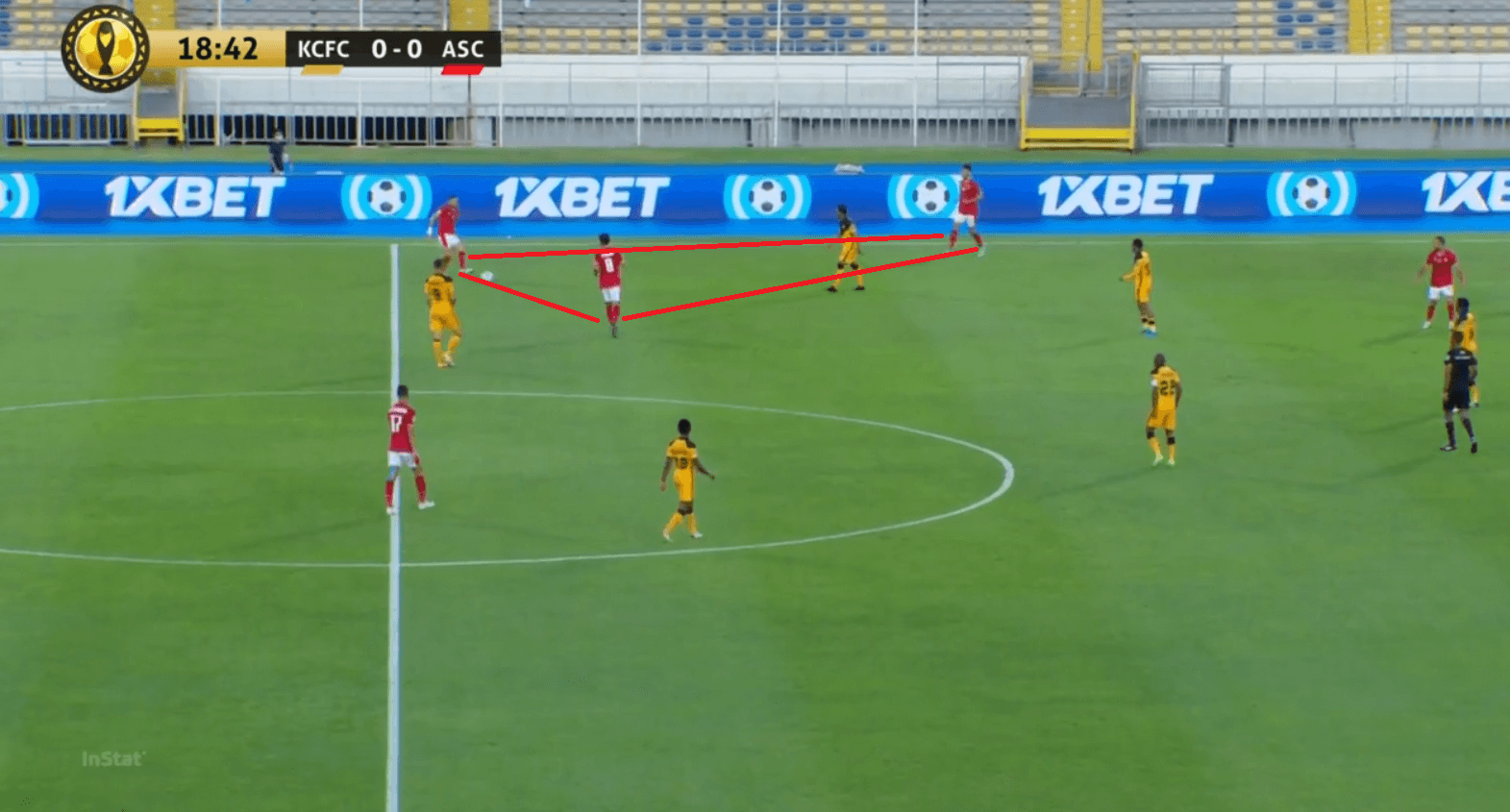 The Al Ahly player’s superiority in terms of quality was very much visible throughout the game. Even before the red card, the men in red dominated the possession as well as the territory and had control over the proceedings. It was partly due to Al Ahly players’ ability on the ball that saw them retain them for a longer period of time. We can see an example of this in the image below where Kaizer’s CM moves up to press the ball carrier, which he shouldn’t have in the first place. The ball carrier immediately notices a passing lane to Al-Sulaya who has a very good body orientation facing sideways that helps him to play a first touch pass forward. 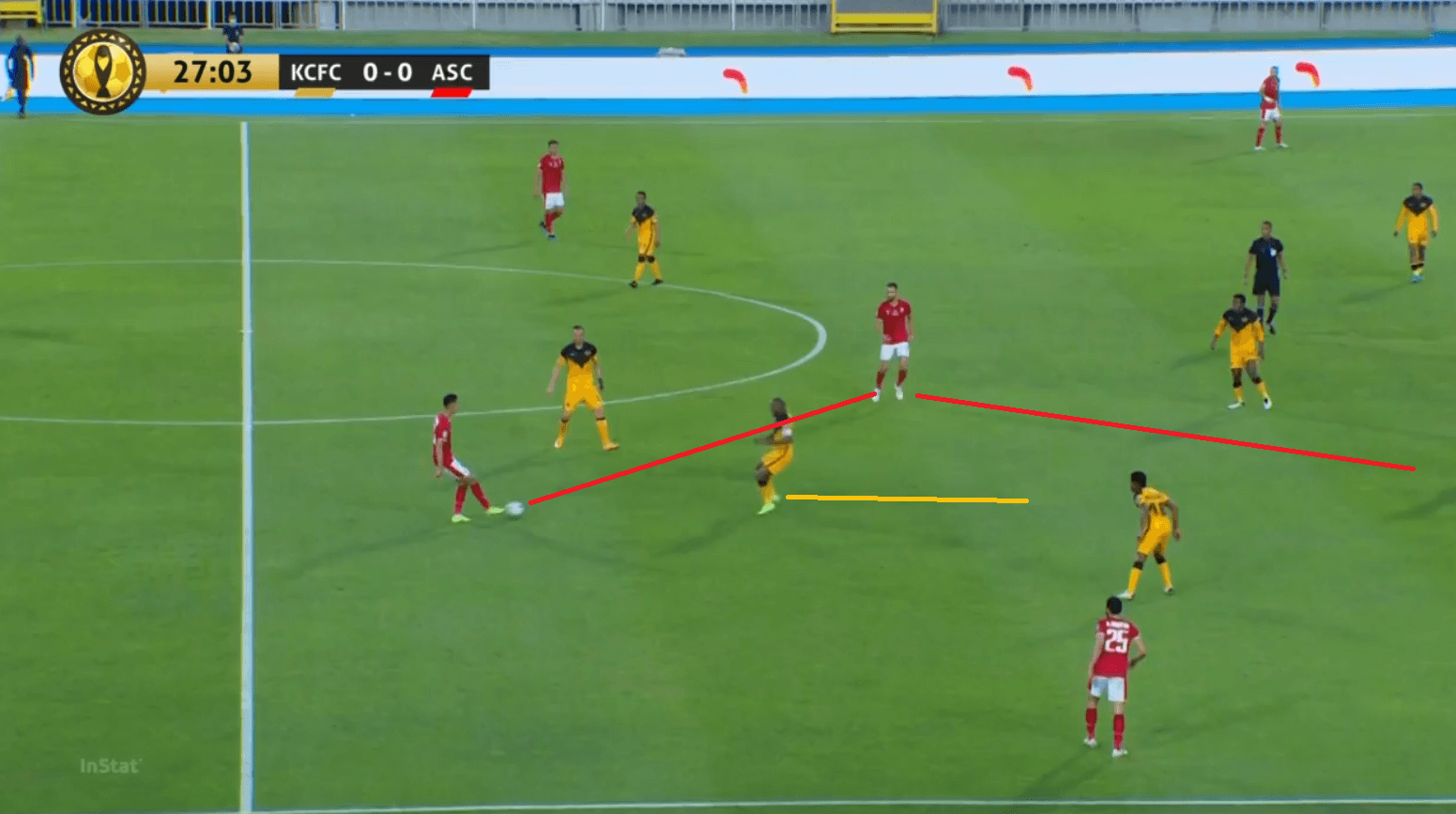 Kaizer on the other hand looked to be more direct and wanted to hit Al Ahly on the counter-attack. Mostly, they would look to skip the second phase of progression by going long using their CBs to their forwards. We can see an example of that in the image below where the centre-back has played a long ball to the forward in space behind. 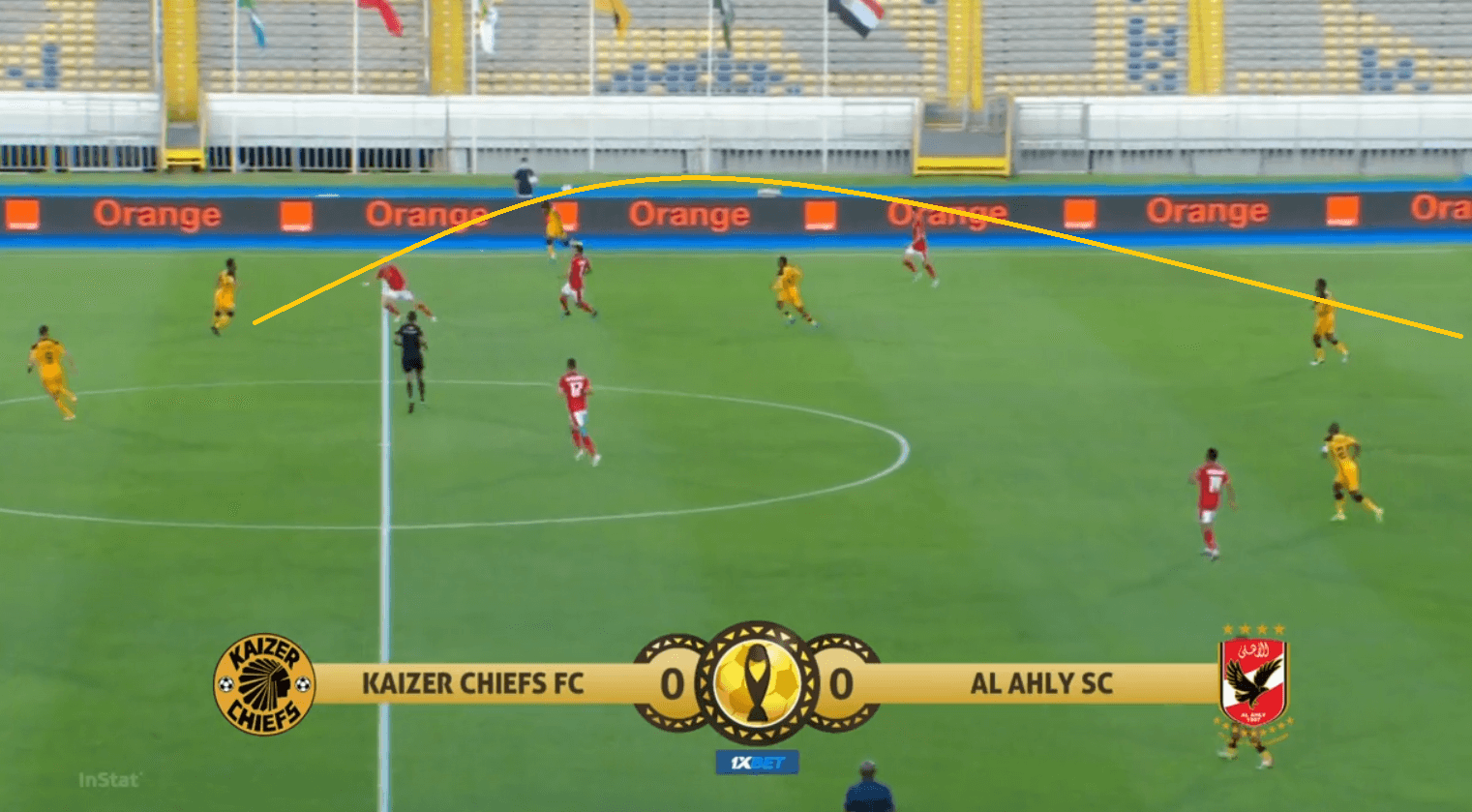 The advantage of skipping the second phase was that the Al Ahly’s midfielders and forwards went forward to press high. This meant that the players can receive the ball in space and with the defenders not committing very high, Kaizer’s forwards can now engage in 1v1 situations with the defenders. We can see an example of this where a ball is played on top of the defence from the Kaizer Chiefs player who received a long ball just a moment before like in the image below. 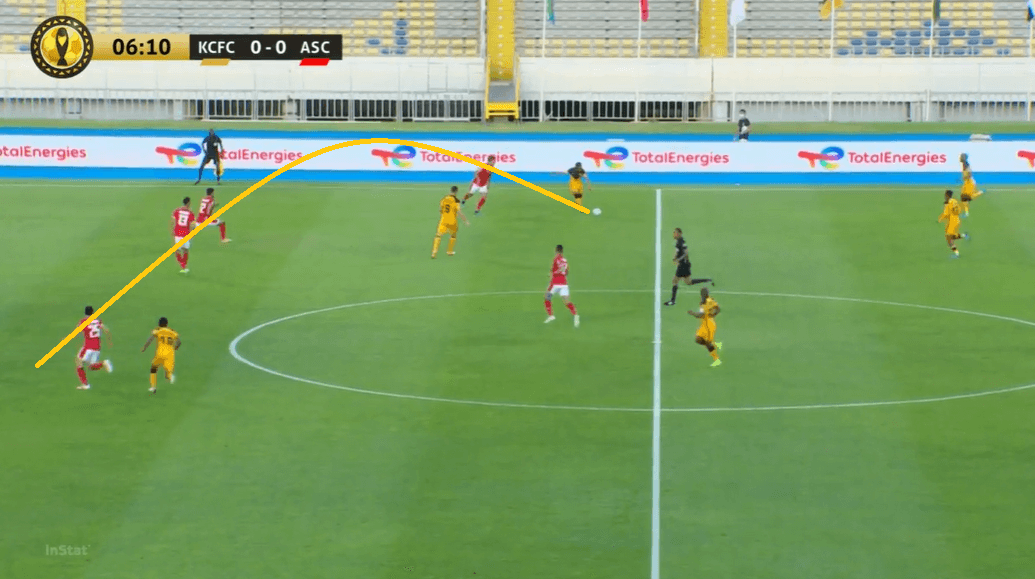 After the red card, Kaizer were forced to play a 4-3-2 system with the front-three now becoming a front-two. Their ability to press was pretty decent for a team that was restricted to ten men as they didn’t look to press the CBs but were hovering close to the pivots like in the image below. 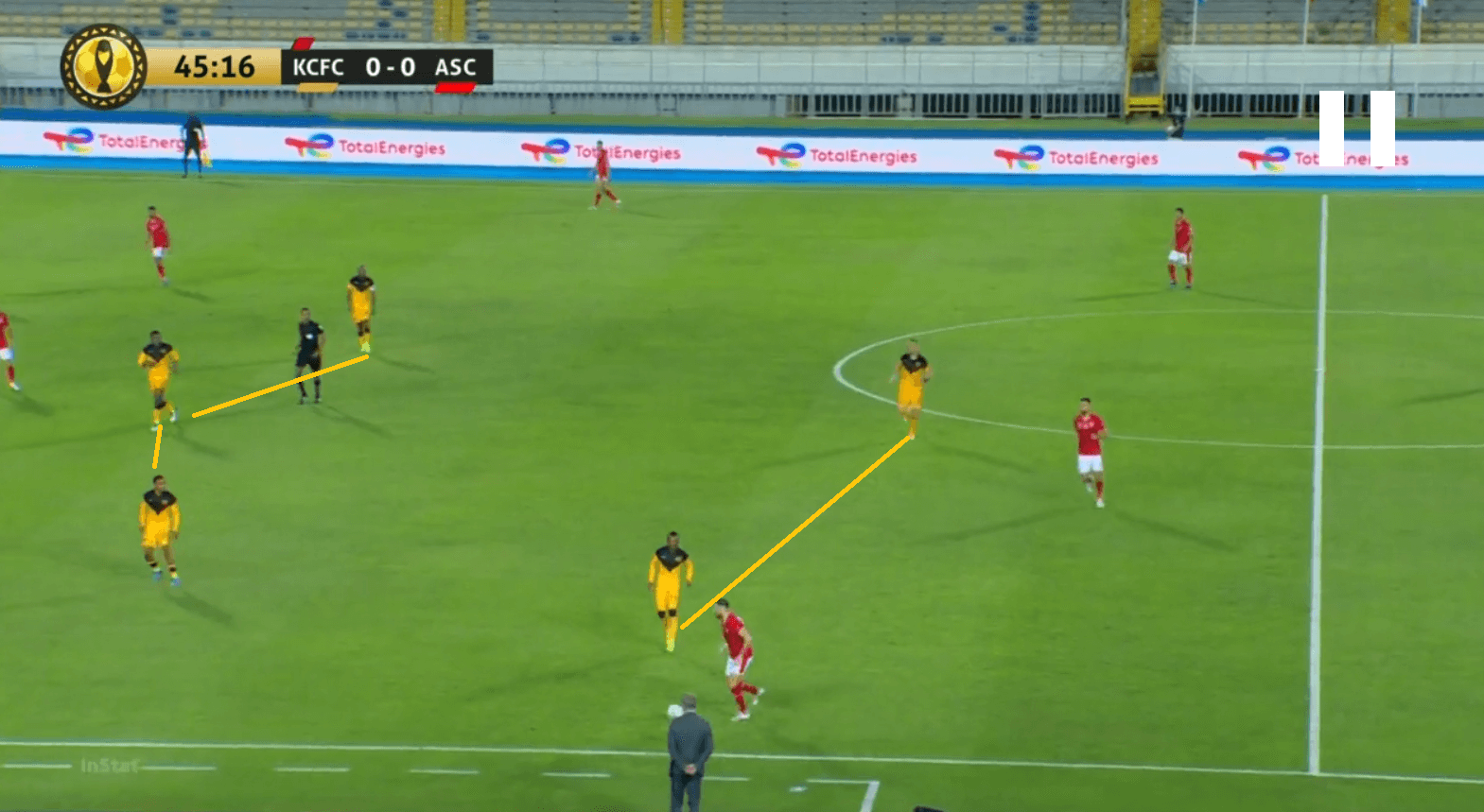 But Al Ahly found a way to stretch them laterally and with the five men advantage on the final line against the four from Kaizer Chiefs, they were easily able to find gaps in the defence. We can see an example of this in the image below where the full-back goes out wide to the Al Ahly full-back and this opens a gap in the defence. This horizontal stretching eventually indirectly led to their first goal. 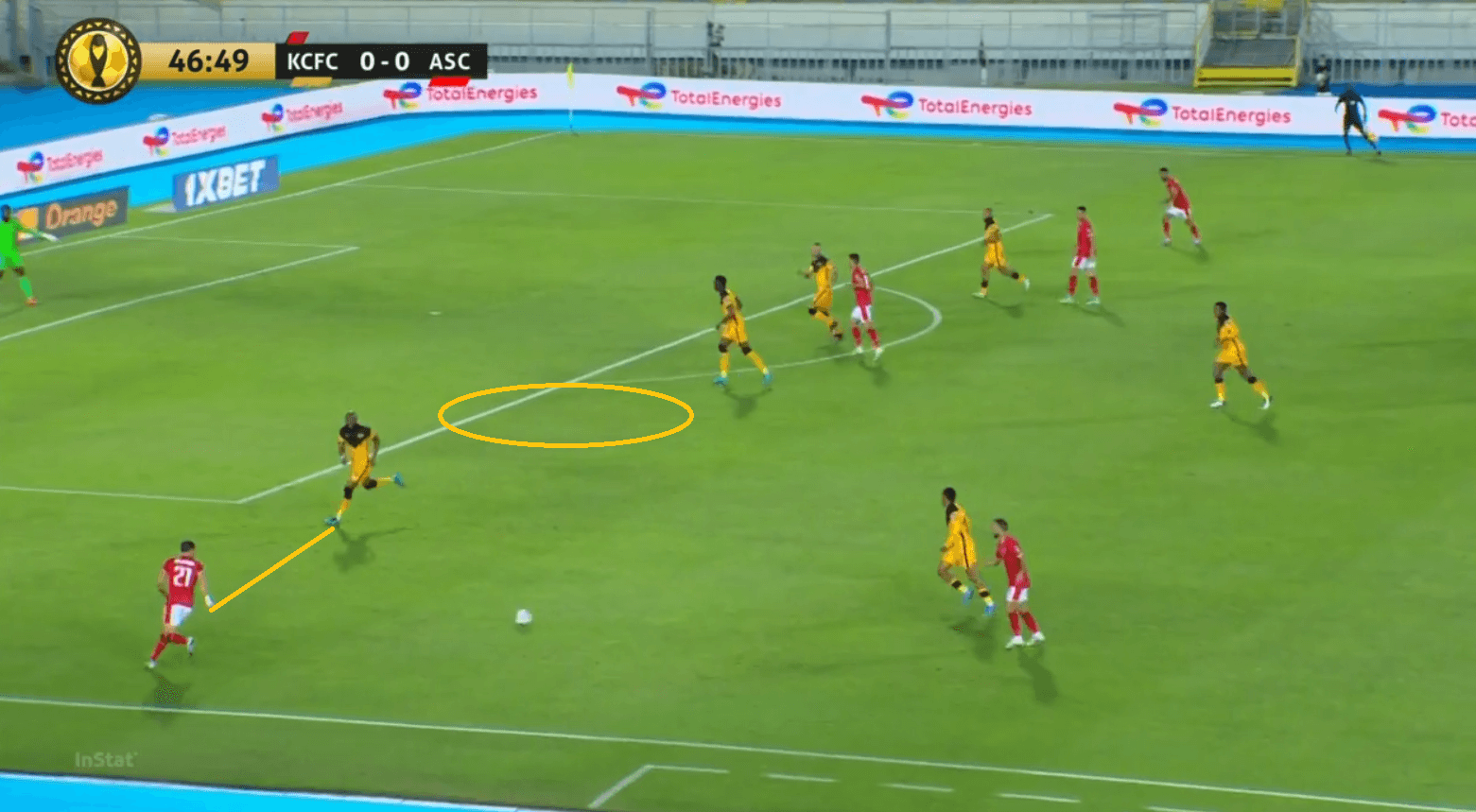 Al Ahly eventually scored the final two goals on the counter as desperate Kaizer Chiefs wanting to get something out from the game were exposed during the counter-attacks. Overall, they were deserving of their victory as they went on to clinch their second Champions League title in a row and clinch a spot in the 2021 FIFA Club World Cup which will also consist of UCL champions Chelsea.