Kosovare Asllani is a 32-year-old veteran Swedish international player who plays with the Spanish Primera División’s Real Madrid. Asllani had several other experiences at different clubs before playing with the Las Blancas. She started her professional career at Linköping, then she had a brief spell at NWSL’s Chicago Red Stars and returned to the Damallsvenskan and played for both Linköping and Kristianstads.

From 2012 to 2016, Asllani moved to France and had a relatively long experience at PSG and followed it with one season at Manchester City before getting back to Linköping, CD Tacón and then Real Madrid. This career can only prove how the demand for this player never ceased to exist, knowing that she was and is one of the most talented players in Europe, especially from an attacking perspective.

In fact, Asllani has just left Real Madrid this season and the news suggests that she has already reached an agreement with Serie A Women’s Milan. Therefore, this tactical analysis scout report will study the player’s characteristics and key skills while linking the findings to both her possible addition to Milan, her adaptability to Milan’s tactics, and her predicted role and contribution to the Swedish Women’s national team during UEFA Euro 2022.

Asllani plays in most attacking positions and her coaches usually employ her as an advanced playmaker, either in the 4-2-3-1 formation or in the 3-4-1-2 one as well. Moreover, Asllani is used to playing as a striker mainly in the 3-5-2 formation. In other words, Asllani’s strengths become more useful when she plays as a second striker, forming an attacking duo with another centre-forward. Apart from being responsible for scoring goals, Asllani’s main roles include playmaking and providing the final pass to her teammates, knowing that Asllani is an intelligent attacking player with great vision and passing accuracy.

If her move to Milan becomes a reality, Maurizio Ganz, Milan’s actual head coach, would find no problems in fitting Asllani to the system or vice versa. In other words, he would have an additional key attacking option to be used in the way he wants while guaranteeing the balance between attack and defence. Therefore, it is very probable that the team will play according to the 3-5-2 formation following Asllani’s arrival since Ganz usually prefers to play with a back-three. Asllani would form an attacking duo with Martina Piemonte exactly like what was done when Ganz had strikers like Valentina Giacinti and Natasha Dowie at his disposal.

Nevertheless, if the coaching staff decides to use a 4-3-3 formation to exploit the winger’s abilities, Asllani would more likely be employed as a central midfielder with more attacking duties and less defensive ones or even as a left-winger. Therefore, a player like Asllani would certainly solve numerous attacking issues for Milan especially when knowing that such a player would provide quality and concretisation inside the final third.

Concerning UEFA Euro 2022 though, Asllani could possibly be used mainly in midfield and sometimes in attack as a second striker. But she would mainly be used as an advanced playmaker given that the team already has plenty of other excellent options for the striker’s role such as Stina Blackstenius and Lina Hurtig. Therefore, using Asllani just behind one or two of them would benefit the team more and provide the necessary attacking support.

As you can see in the following heatmap, Asllani covers the whole final third as she usually moves well with and without the ball to provide passing options in dangerous areas. Her dynamism in this area will surely be crucial as her movements can bring a lot of threat to opposing teams. 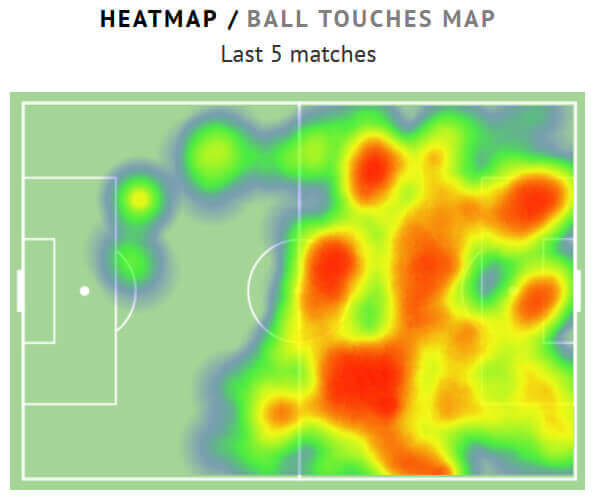 Asllani has an average shooting accuracy of 42.2% and an xG of 0.45 per 90. These numbers explain that Asllani is not a striker by nature but rather a playmaker who works a lot to support her attacking teammates. Yet, the Swedish international has a great sense of goalscoring and finished the actions very well most of the time, especially when she positions herself well to receive the ball in key areas (which happens a lot).

In addition to that, thanks to the experience she had so far, Asllani became a potent goalscorer who follows the ball very well and finishes with determination even when put in complicated situations. For instance, she was able to score a magnificent goal against Barcelona after receiving a cross from Lucía Rodríguez knowing that the ball was difficult to reach. Her ability to coordinate her body in an adequate way in order to direct her shot perfectly and touch the ball despite being disturbed by her direct opponent’s clearing attempt proves that Asllani is an intelligent and determined goalscorer. 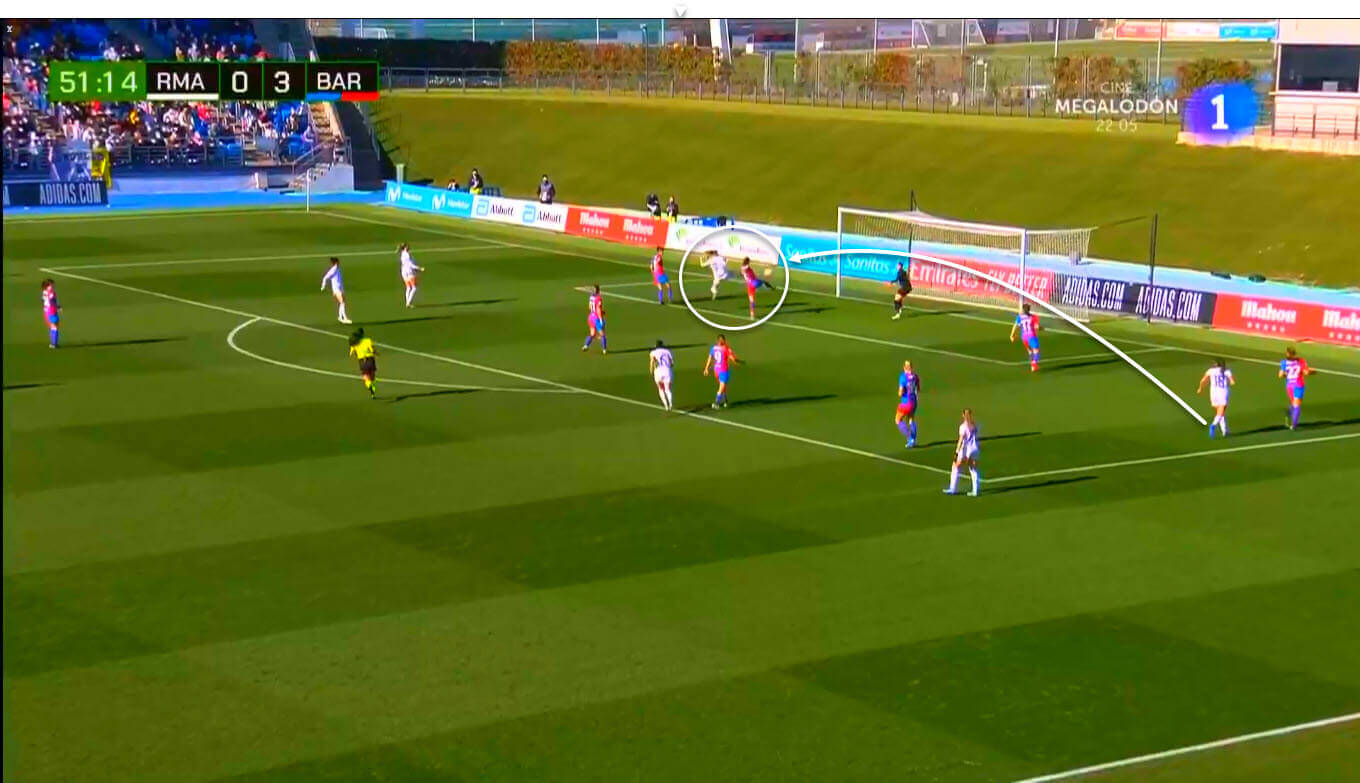 Also, Asllani can be very quick inside the box even when she is disturbed or marked. Her ability to analyse her surroundings and go for the best decision in a quick and unpredictable way allows her to win in terms of passing, finishing or even in duels. The following picture not only highlights Kosse’s quickness in terms of decision-making and in exploiting the element of surprise but it also shows that she is able to shoot with accuracy with both feet, and that can be considered a big weapon especially for attacking players like herself. 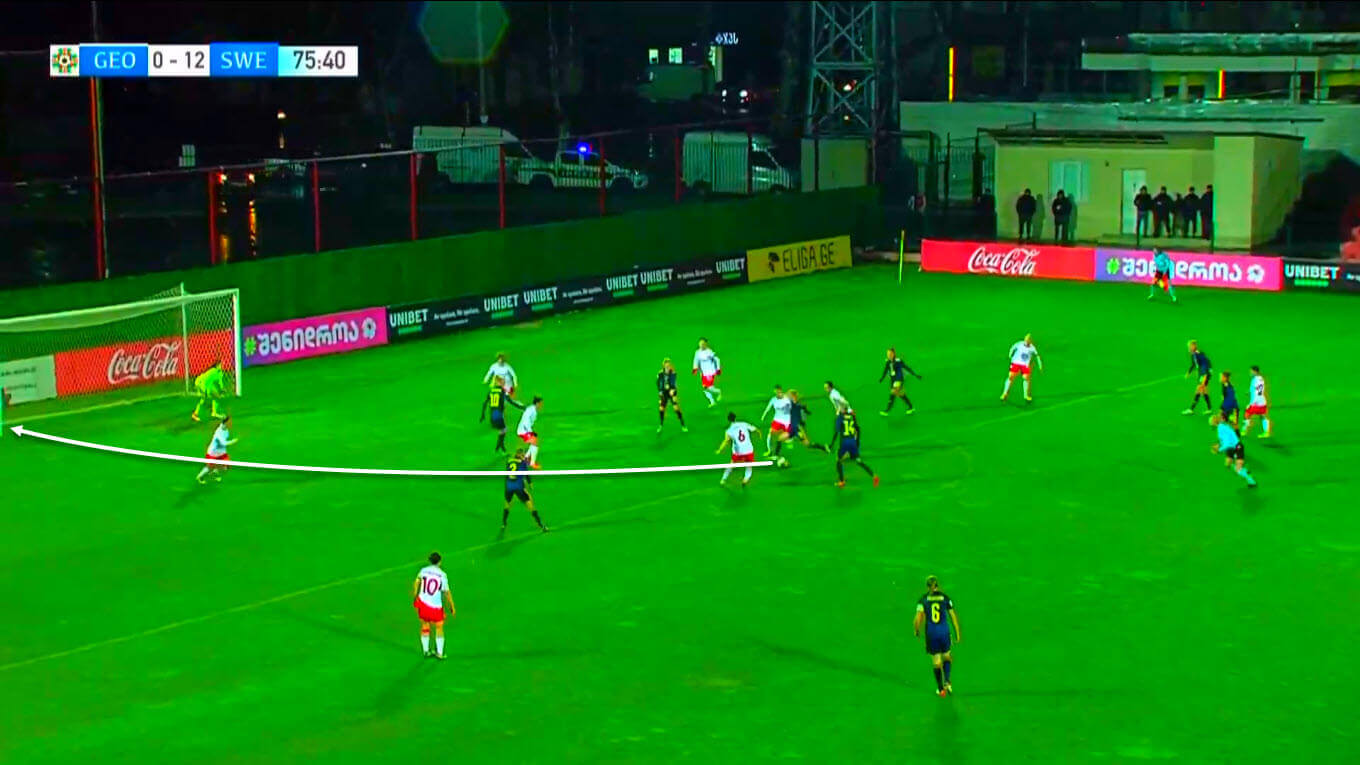 Here is another example that shows Asllani’s ability to score with her left foot once again but this time with an acrobatic move, such as in the first example against Barcelona. These goals highlight Asllani’s great physical abilities, and by this, we mean body coordination and agility, especially in her finishing executions. Being able to receive a pass while being marked, controlling it with her chest and then shooting with her left foot before the ball hits the ground explains that this player can deal extremely well with complicated situations inside the box and manage to reach the desired outcome. 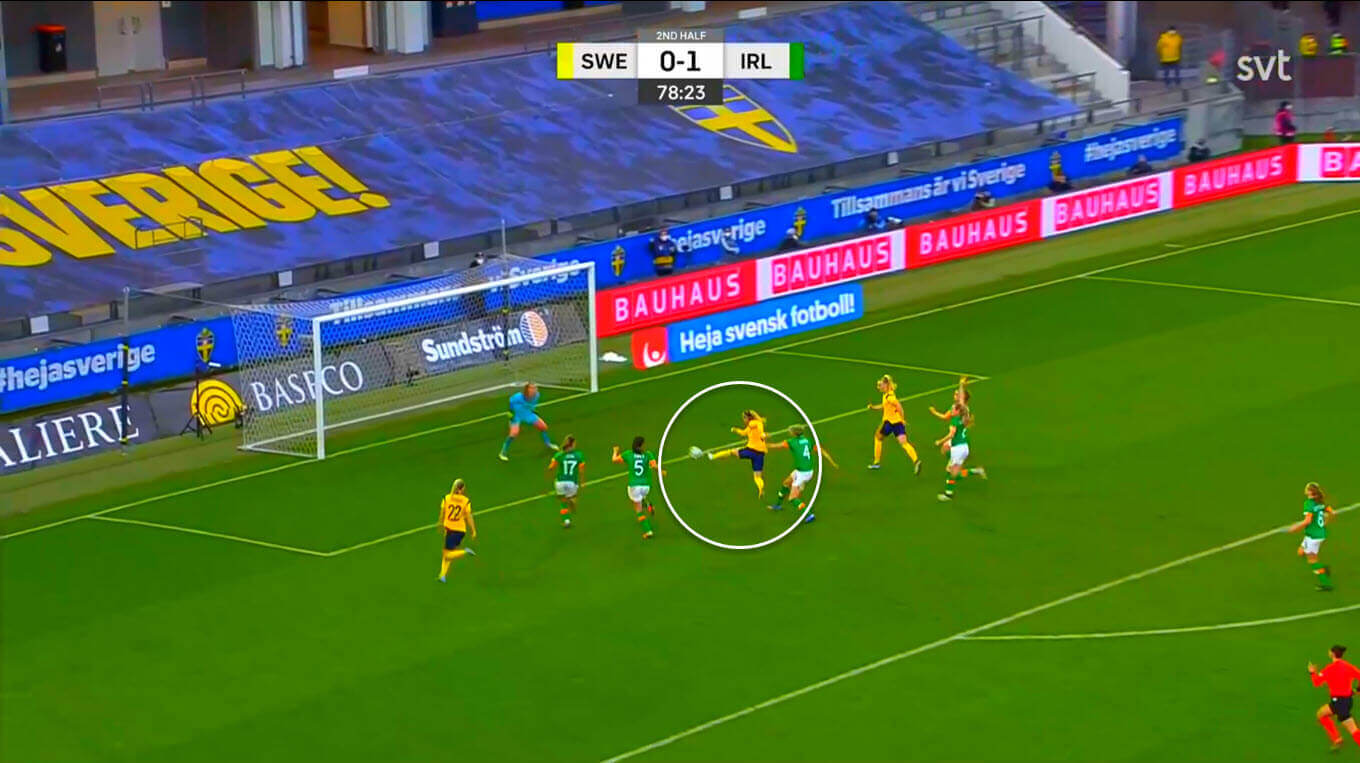 Moreover, Asllani is an excellent set-piece specialist and she usually scores penalties, and free-kicks, and executes corner-kicks in an efficient way. And this set-piece expertise will surely be beneficial for a team like Milan and also for Sweden during UEFA Euro 2022 since set-pieces can represent great alternatives in terms of opportunities, especially when playing against teams that defend very well and/or with a retreated defensive bloc. A player like Asllani can exploit these set-pieces in the best possible way knowing that she has already scored free kicks like the one shown below. 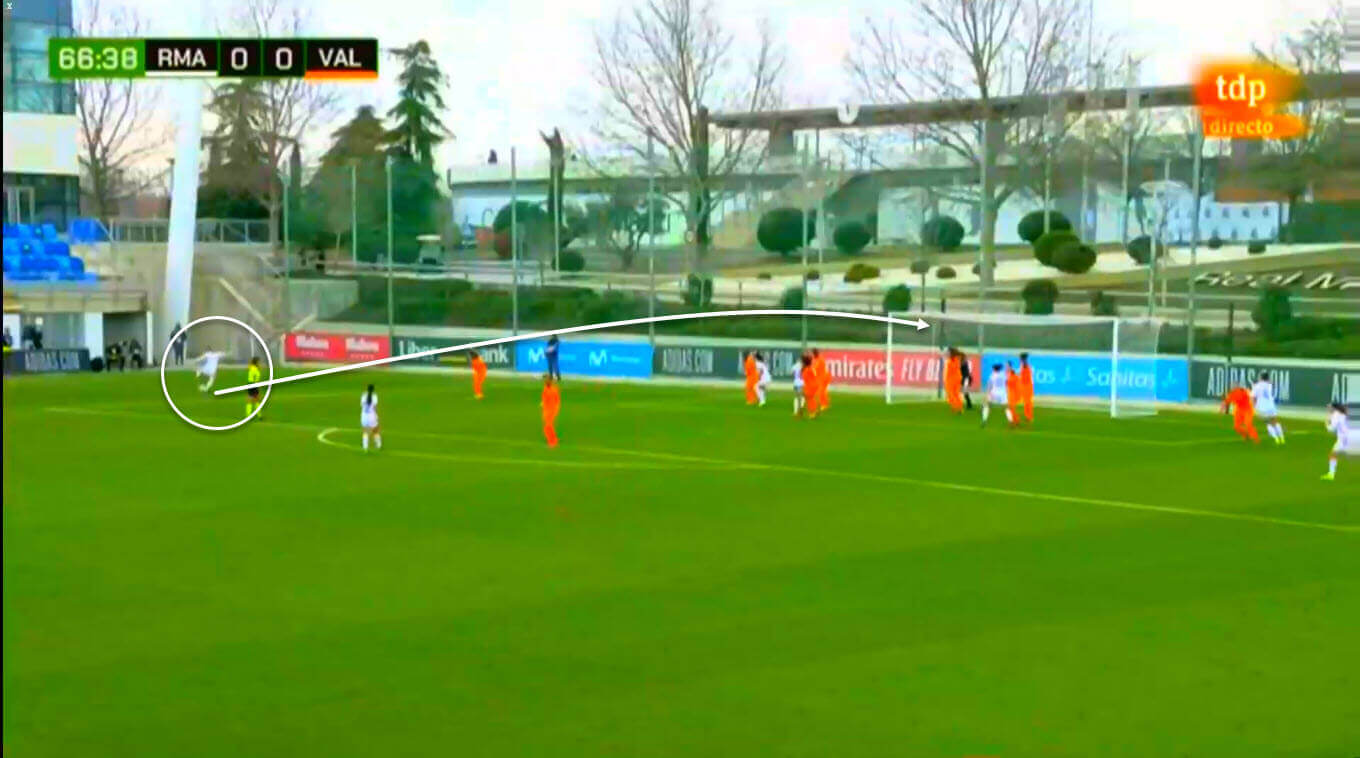 When it comes to playmaking, Asllani has a passing accuracy that reaches 75.7% knowing that she provides 67.7% accurate passes to the final third and 52.7% accurate passes to the penalty box. These statistics highlight Asllani’s passing abilities and show that her passing accuracy doesn’t drop a lot when passing to the box. But in order to assess the degree of importance of Asllani’s passes, one must look at her key passes to identify their real impact on actions. In fact, after exploring Kosse’s key passes and assists, we can say that her playmaking intelligence was crucial to both Sweden and Real Madrid and will most probably be crucial for Milan’s attacking actions as well in the future.

Asllani’s ability to read the game and provide key passes with a first-time touch are fundamental for succeeding in isolating defenders and in putting the receiver in the best possible situation. In fact, using first-touch passes in such key areas while being surrounded by opponents makes these passes more effective as it leaves less time for opponents to react or to mark the receiver as needed.

And that’s exactly how Asllani creates the difference inside the final third. In the next example, Asllani receives the ball under pressure, controls it and as it is about to fall, she immediately provides a chipped through pass to her teammate who was running on her left, giving her the opportunity to be in a one-on-one situation with the goalkeeper. If Asllani waited for the ball to reach the ground and looked at her teammate before passing she would have either lost the ball or put her teammate in a difficult situation because defenders would certainly mark the player in that case.

Moreover, Asllani knew that her other teammate was in an offside position and decided to pass to the one on her left despite being tightly marked and disturbed while controlling the ball. Such characteristics that are related to quick and efficient ball control, scanning the pitch before receiving the ball and being able to provide key passes with quickness makes Asllani a great playmaker. Kosse makes these actions look simple and natural while in reality, they are very complicated to execute with success and in a consistent way. 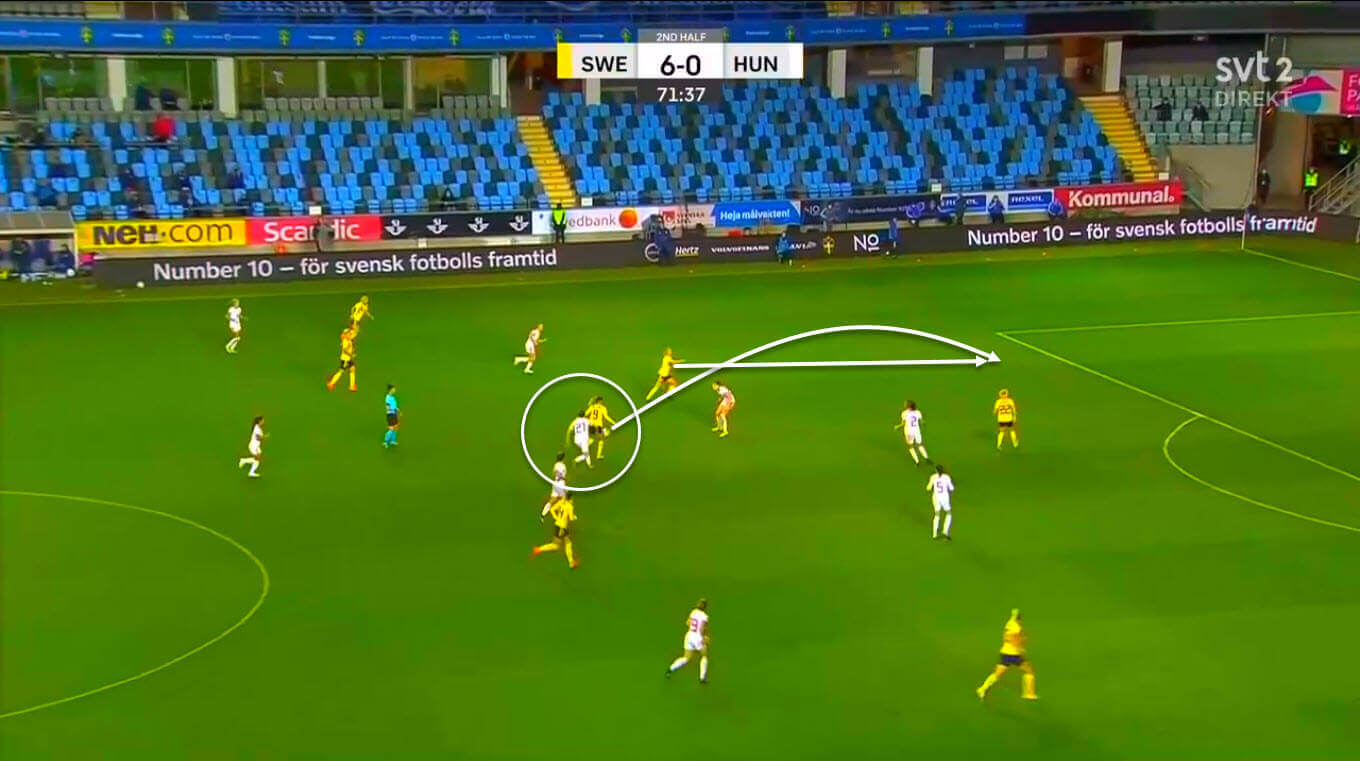 A similar action occurred in this match when Asllani advanced with the ball until she reached the most adequate place and timing for her pass between the two opponents in order to put her teammate in the best possible shooting position. Having such excellent passing abilities makes Asllani succeed in being dangerous even when playing as a second striker since this position allows her to be closer to the main striker and therefore provides her with passes even further. 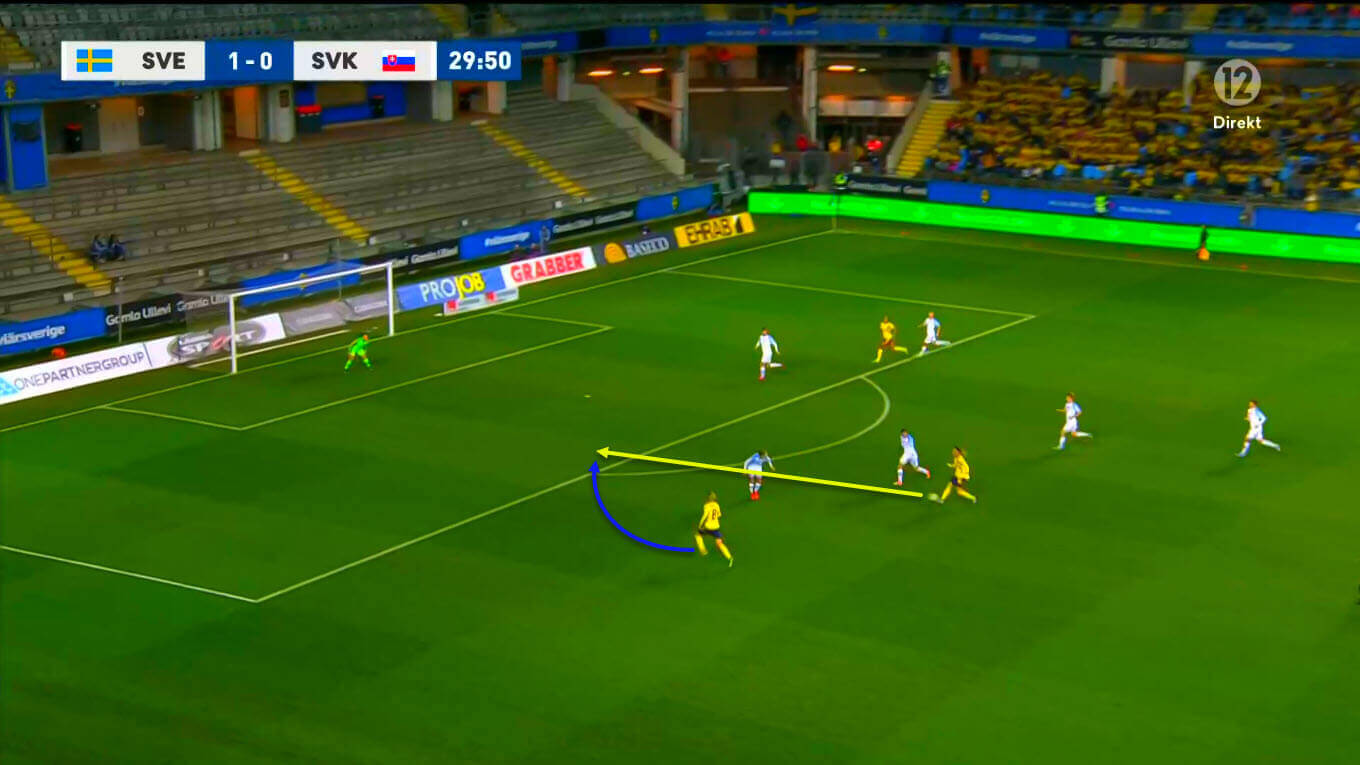 Asllani is one of Europe’s best attacking players especially in terms of playmaking, key passing, vision, finishing and body coordination. She can be very useful for Sweden during UEFA Euro 2022 as she has always been and she would surely be fundamental for Milan Women next season, especially if the coaching staff exploit her abilities in the best possible way and not the contrary, in order to give her the opportunity to help the team reach their seasonal goals of reaching the UEFA Women’s Champions League. 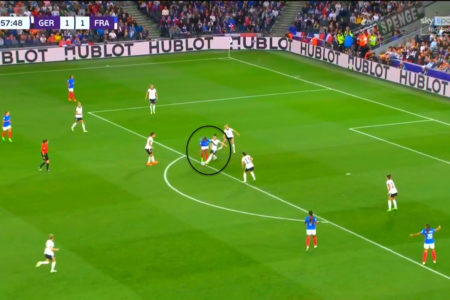 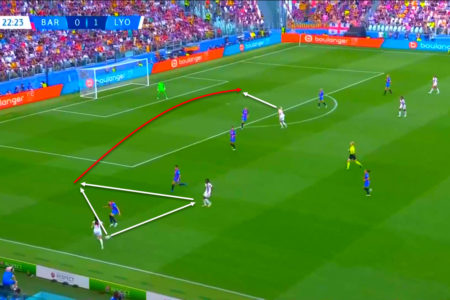 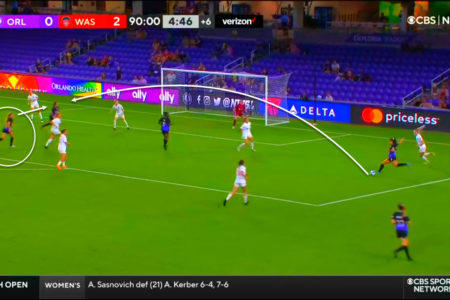