Klara Bühl is a German international player who is 22 years old and plays mostly as a winger. She started her footballing journey at SC Freiburg in 2016 before moving to Bayern Munich in 2020. And at the moment, she is approaching her peak years step by step as she put on some excellent performances during Euro 2022 with Germany and during her time with Bayern Munich so far, even though it was painful for her to miss the Euros semi-final and final to Covid-19.

Bühl is becoming a more complete player this season and her impact on her team’s results and performances is becoming more visible. That’s why we think it would be very informative and fruitful to explore this player’s characteristics, abilities, roles on the pitch and what makes her a special player.

This tactical analysis scout report will therefore focus on identifying her key skills, without forgetting to link this information to an analysis of Bayern Munich’s tactics.

Bühl is mainly a winger who plays with almost the same efficiency both on the right and the left wing. She regularly alternates between playing on the right and on the left wing in Bayern Munich’s 4-2-3-1. Moreover, she has been used as a striker at times, especially with Germany. But in general, Bühl is usually played on the wings either with Bayern Munich or with Germany in their 4-2-3-1 as well. What characterises this player is the fact that she has some great physical abilities that help her avoid her opponent’s disturbance in duels.

Moreover, her ability to use both feet with almost the same power and efficiency make her a very useful player upfront. Plus, Bühl has got a very good vision of the pitch and her passing accuracy is usually outstanding, even when she is being tightly marked. Her roles mainly consist of serving strikers inside the box either with crosses or with powerful through passes. She is also required to get inside the box whenever possible in order to give extra passing options when not having the ball. In these cases, she positions herself in the best possible way in order to receive and finish the actions with success.

When having the ball, Bühl’s mission is to advance on the wing, serve a striker or get inside the box with the ball by trying to cut inside and shoot or by advancing towards the line and provide a backward pass to a player coming from behind.

In addition to these attacking missions, Bühl has also got defensive roles, knowing that Bayern Munich are a very disciplined team that focuses a lot on teamplay and on defending as a unit. The following pizza map highlights Bühl’s outstanding defensive statistics and shows that she is excellent in winning defensive duels, which helps her team a lot in the defensive phase.

At the same time, it indicates that there is still room for improvement for the German international in terms of goal contribution and especially in terms of aerial duels and dangerous passing.

Nevertheless, it should be said that Bühl is an excellent dribbler despite the fact that she relies on direct play so often. 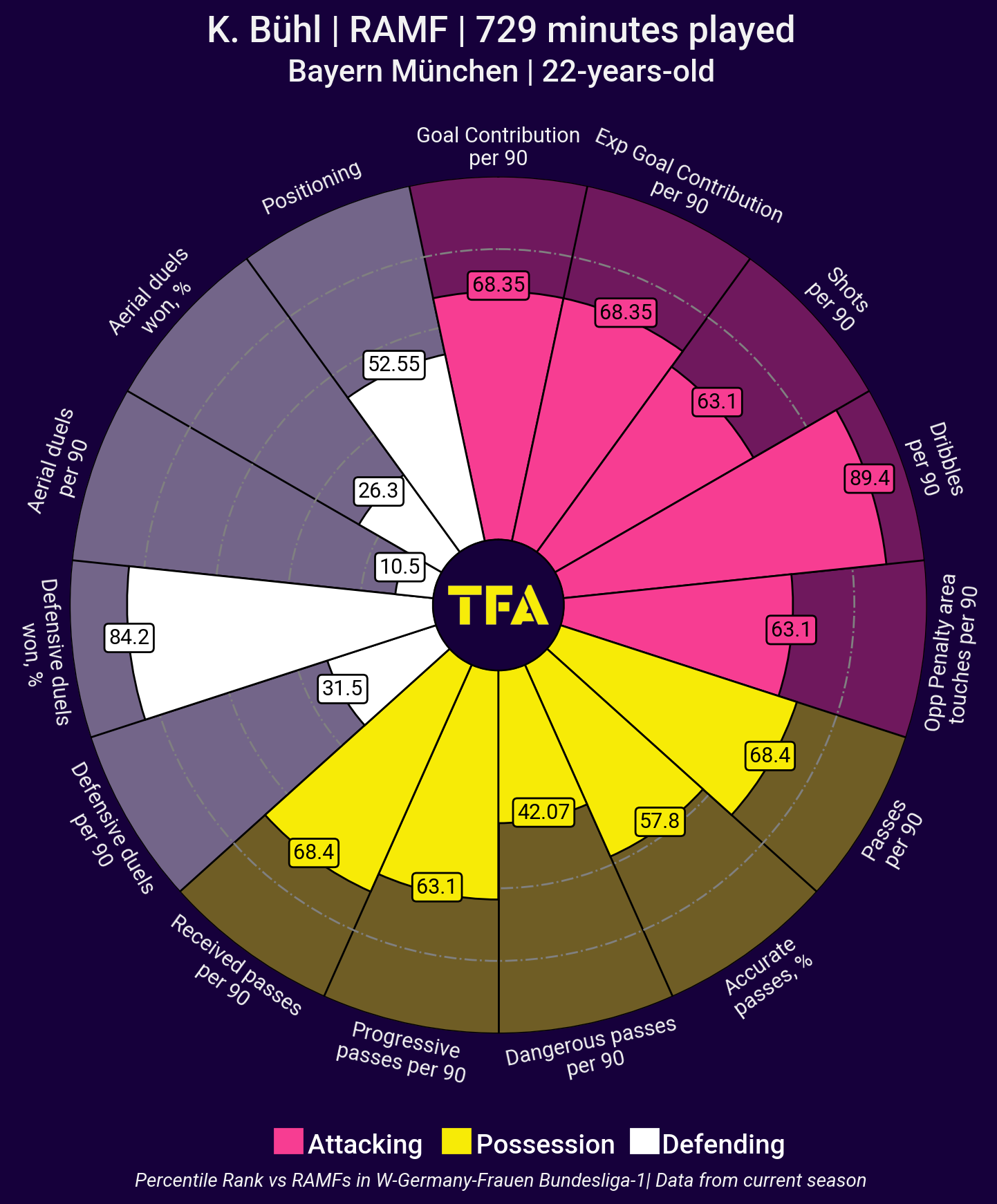 What makes Bühl a very useful winger is her unselfishness and her ability to always provide key passes or crosses to her teammates. Playmaking and assist making are therefore the main strengths of Bühl since this is her main role in the attacking phase. The following action stresses the fact that Bühl is an unselfish attacking player as it clearly shows how she preferred to make an assist to her teammate instead of shooting herself, knowing that she was in a position that allows her to score.

Nevertheless, her unselfishness and the fact that she quickly understood that her teammate was even better positioned helped her make the passing decision without complicating things. 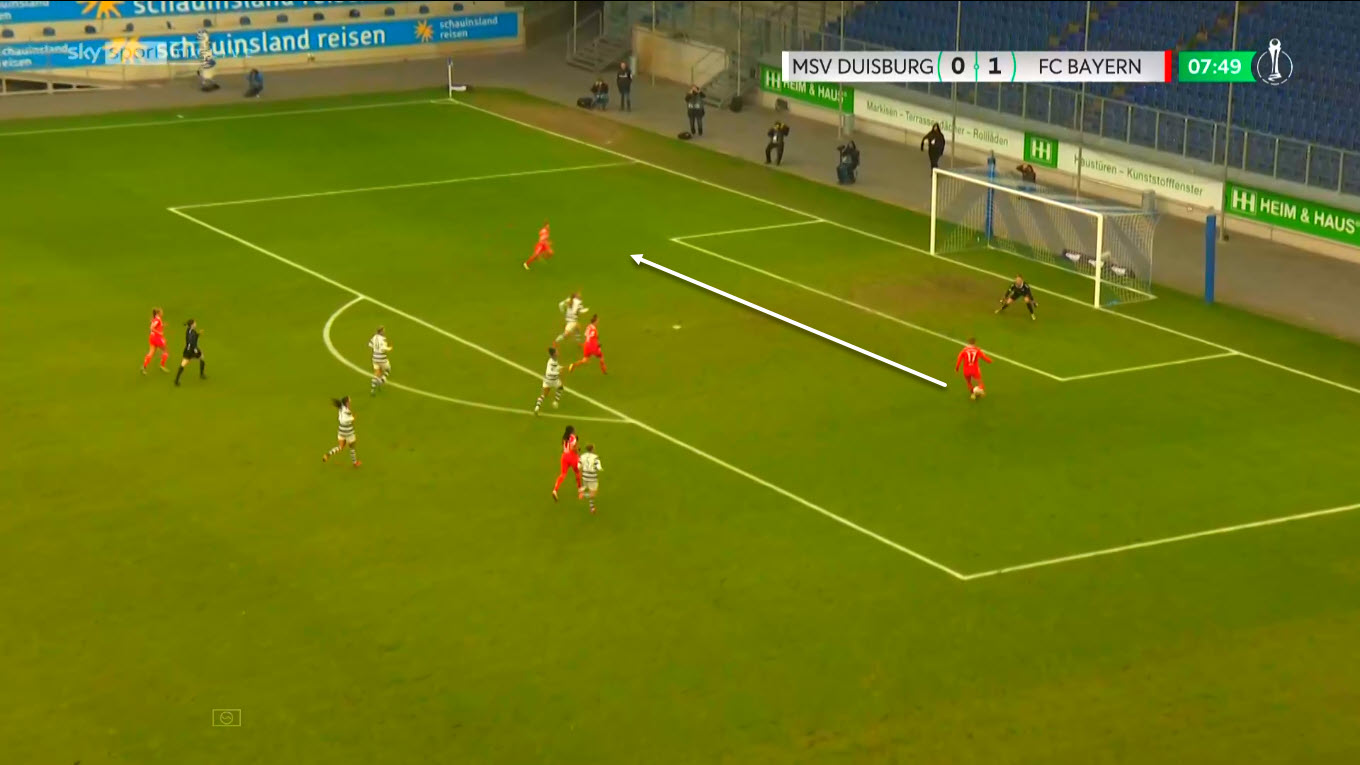 Decision-making inside the final third is also one of Bühl’s key strengths and this quality helps her in having an advantage over her markers on most occasions. Moreover, being able to provide assists using her left foot gives Bühl the possibility of alternating her moves frequently when advancing on the wing. Instead of using her right foot to cut inside, make early crosses or shoot from distance, she is able to surpass her direct marker and go for crosses using her left foot. She did exactly that in the following example during which she advanced towards the box before providing an accurate assist to her teammate using her left foot. 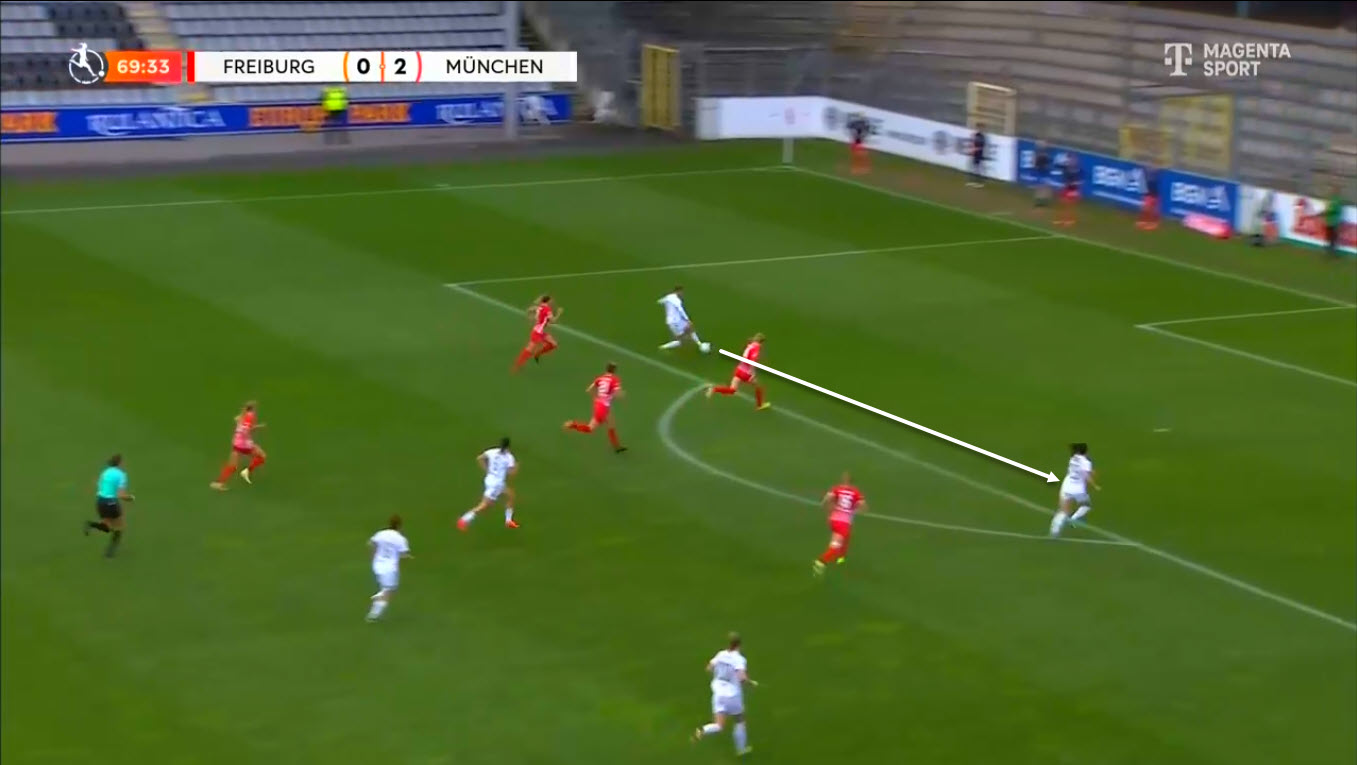 In fact, these penetrations on the left wing and on the left side of the box as well as passes with the left foot towards a player inside the box represent a recurring and successful play by Bühl and perhaps the most identifiable action that resembles this one is her great anticipation of Serie A’s and Austria’s Carina Wenninger to then provide an assist to Lina Magull who scored the goal. 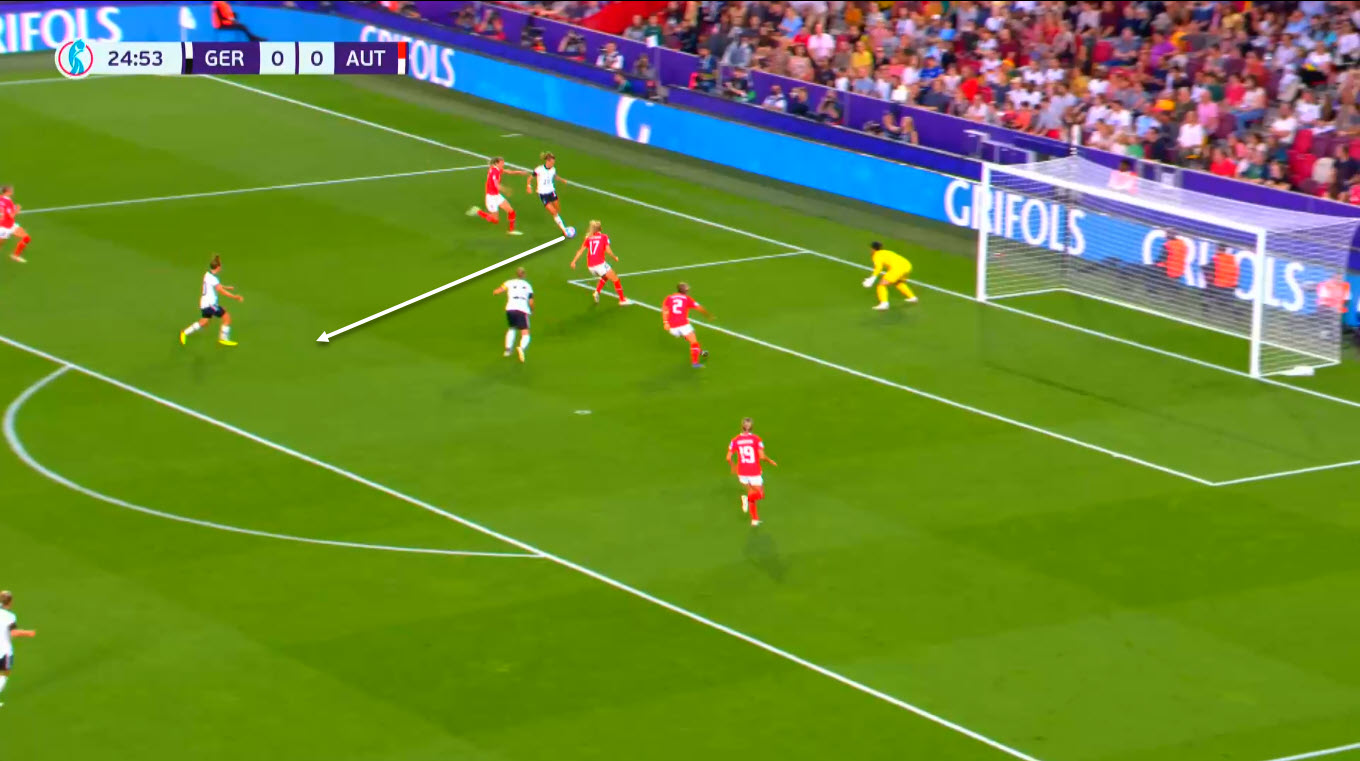 Bühl is also a creative player in the sense that she can interpret situations in the best possible way after spotting the pitch and the movements of her teammates and opponents.

We opted for showing the following example to highlight her creative and key passing inside the final third. The action shows Bühl passing the ball to her teammate with her left foot despite seeing that the latter was tightly marked. Nevertheless, she knew exactly where to provide the through pass in order to meet the team player and not the opponent. 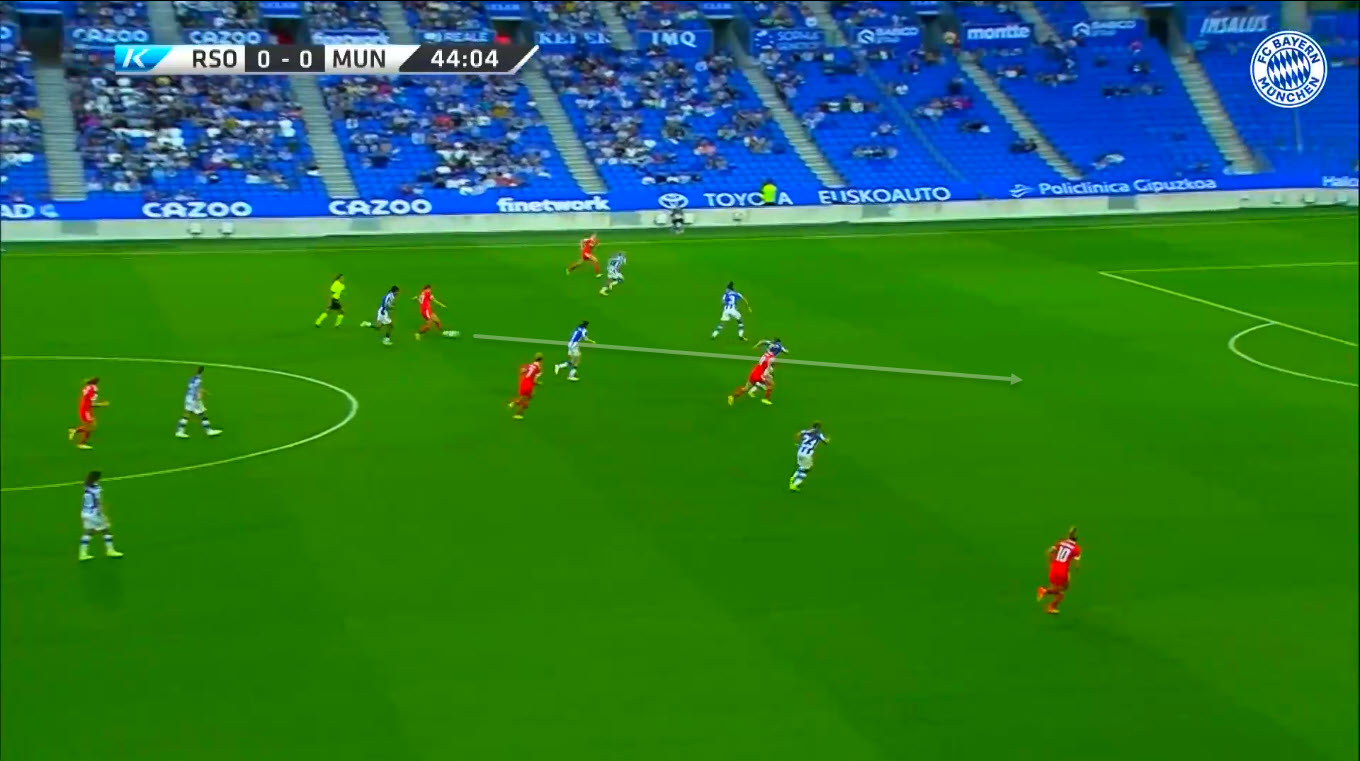 It is fair to say that Bühl’s goalscoring skills are impressive. She is capable of scoring using both feet and from different distances and situations as she is a reliable goalscorer for both Bayern Munich and Germany.

The following goal action against the WSL’s Manchester United shows a glimpse of what Bühl is capable of doing when cutting inside from the left wing. She finds no issues in dribbling and aiming at shooting from distance using her right foot to score, and that’s exactly what she did here despite being marked by two defenders. 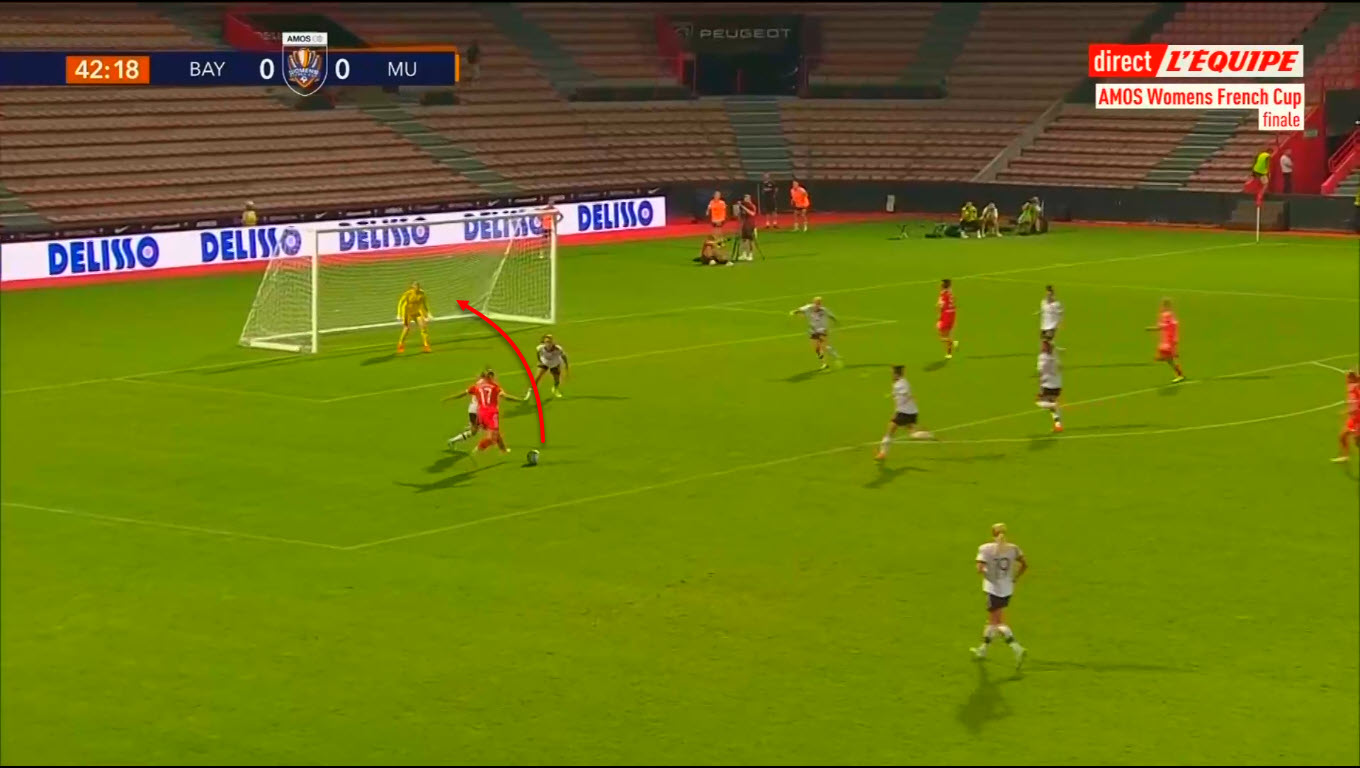 Moreover, Bühl is never afraid of putting herself at risk and her high pressing is usually efficient and fruitful. The best proof to this is her pressing during Euro 2022 group stage match against Spain during which she intercepted the goalkeeper’s pass, dribbled past the defender and put the ball inside the net using her left foot without fear of getting tackled and without hesitation nor overthinking. This direct approach helps Bühl a lot in terms of goalscoring and makes her more unpredictable and dangerous to opponents. 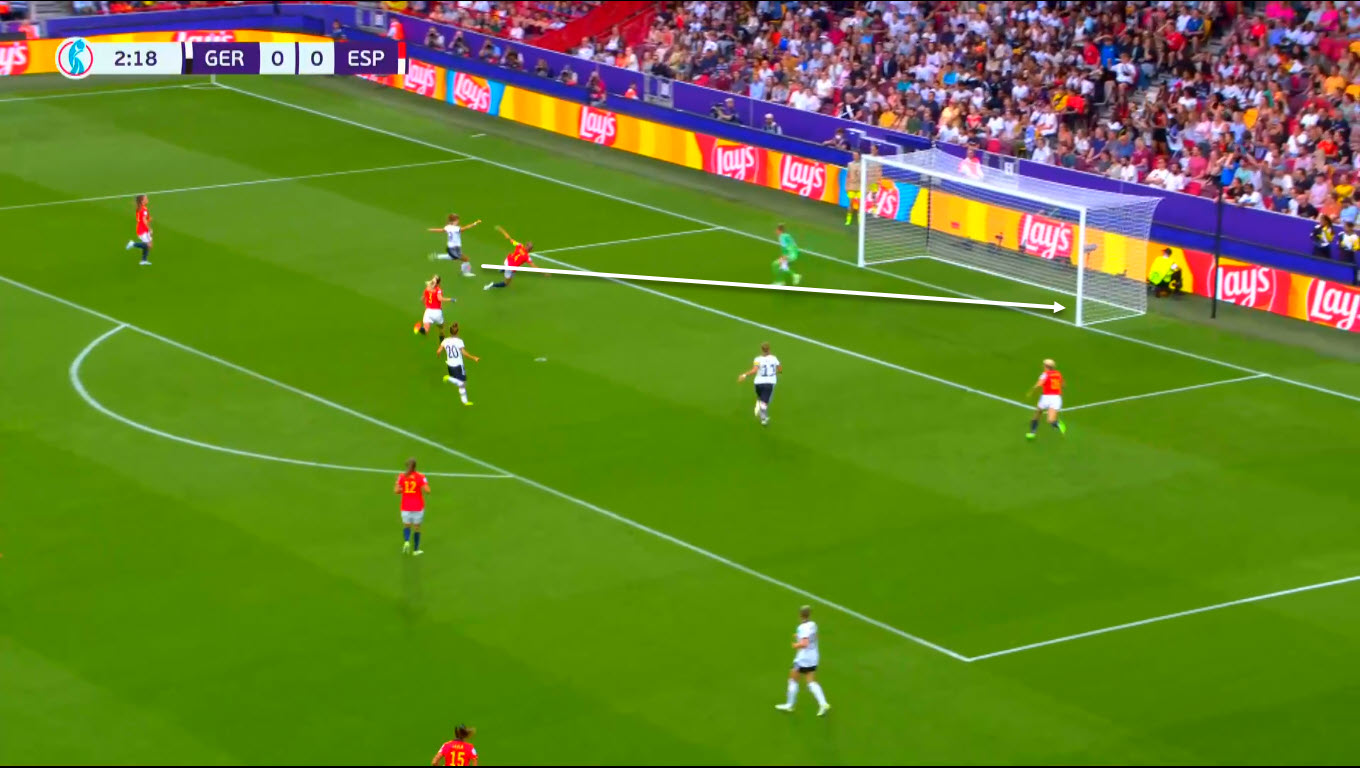 Bühl can also be very impactful when taking set-pieces as she has already proved that she can score free-kicks and provide dangerous crosses towards the box when needed. She scored a direct free-kick against PSG during a UEFA Women’s Champions League match and that free-kick highlights her great shooting techniques and accuracy.

Bayern Munich and Germany can use these skills a lot more and in a more intelligent way in order to get the best out of Bühl. And perhaps making Bühl a regular set-piece taker most of the time would help a lot in this regard. 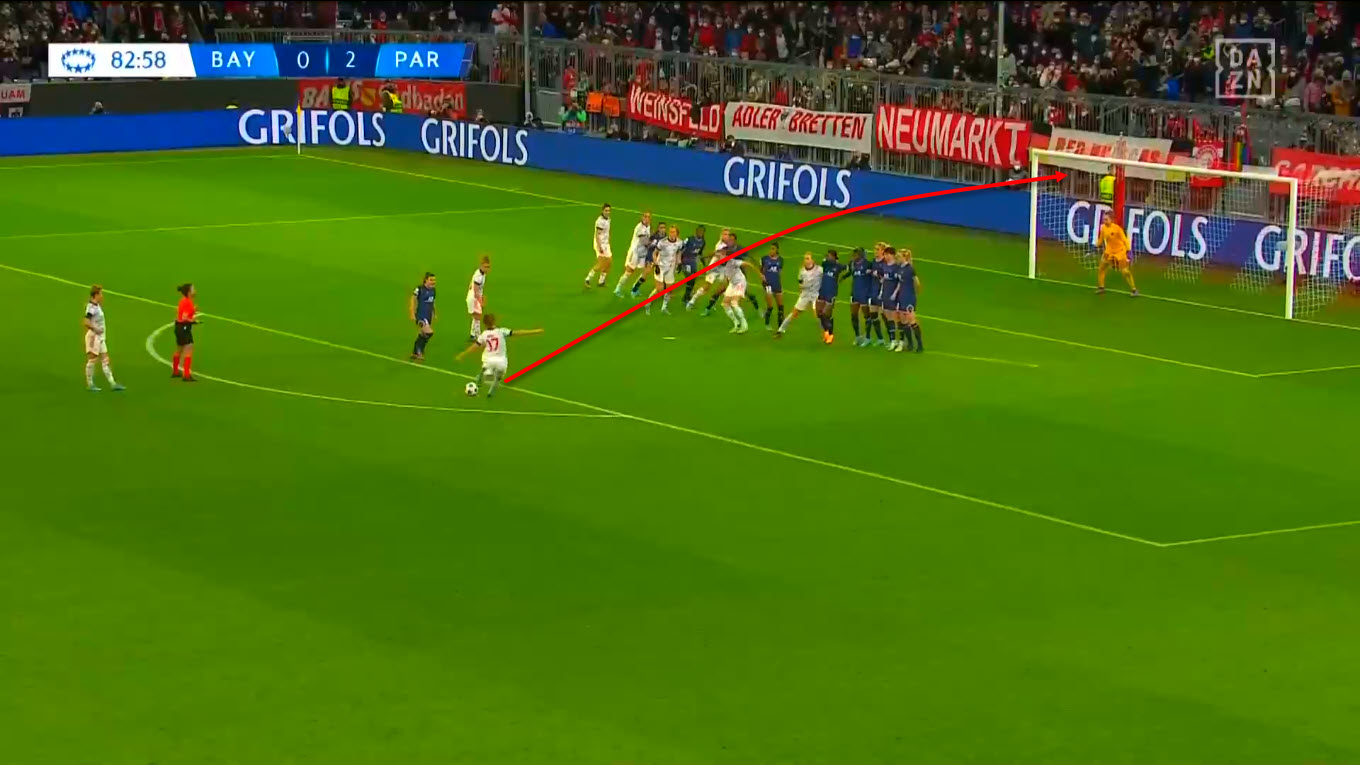 Klara Bühl is one of Bayern Munich and Germany’s best talents and is gradually becoming a very fundamental player for both sides. She has got some excellent skills and techniques that would serve her throughout her career especially if she keeps developing them and improving what requires more work.

Bühl’s ability to play with both feet with almost the same efficiency and her excellent performances in different positions make her deserve to be considered among the best forwards in Germany and in Europe.