Sturm Graz had until to this point an average season as they sit in the fifth position with 32 points out of the opening 22 games. However, one player clearly stood out in this squad: Kiril Despodov. The 23-year-old Bulgarian who is on loan from Cagliari at Sturm Graz scored in this season six goals and provided six assists in 11 games for the Grazer.

Despodov played in the season 2018/19 in just four out of 17 possible games for Cagliari in the Serie A and due to that, the loan was a logical consequence. At Sturm Graz, he performed in this season really well as we’ll see in this tactical analysis in the form of a scout report in which we’ll look at his style of play and tactics.

First of all, before we look in this tactical analysis at the qualities and weaknesses of Despodov to examine his style of play and how he can help his team, we need to talk about his positioning and his movements during a game to understand in which areas of the pitch he has the real impact. In general, you need to consider that the head coach of Sturm Graz, Nestor El Maestro used several formations in this season and while Despodov also played in different positions.

Usually, the Bulgarian is a right-winger who can play also on the left side and additionally he made some appearances in a more central role too. Considering all these aspects, it’s no surprise that his heatmap doesn’t tell us much about his activities on the field except the aspect that he played in this campaign in different positions. Besides, even when he plays as a left-winger, we can often see how he goes into the centre as he is a player who rarely stays in one certain area of the pitch. All these factors are visualised in the shot below.

However, one thing that definitely can be seen in the heatmap for his 11 appearances in the Austrian Bundesliga is that we can mainly find him in the final third. The 23-year-old definitely supports his defenders when it’s absolutely needed, but he’s essentially not a defensive-minded player. This can also be seen in the stats as he just makes 1.82 recoveries per game.

On the other hand, you have to give him huge credit how he permanently tries to support his teammates by giving them passing options. Extremely often we can see how he starts deep runs to then receive a through pass which doesn’t work off that often, but whenever he decides to provide a short passing option, he makes use of his good understanding of the game to find free space. In the example below, his teammate runs to the right wing and distracts two opponents which creates space in the centre in which Despodov positions to provide Emanuel Sakic an option for a simple pass. 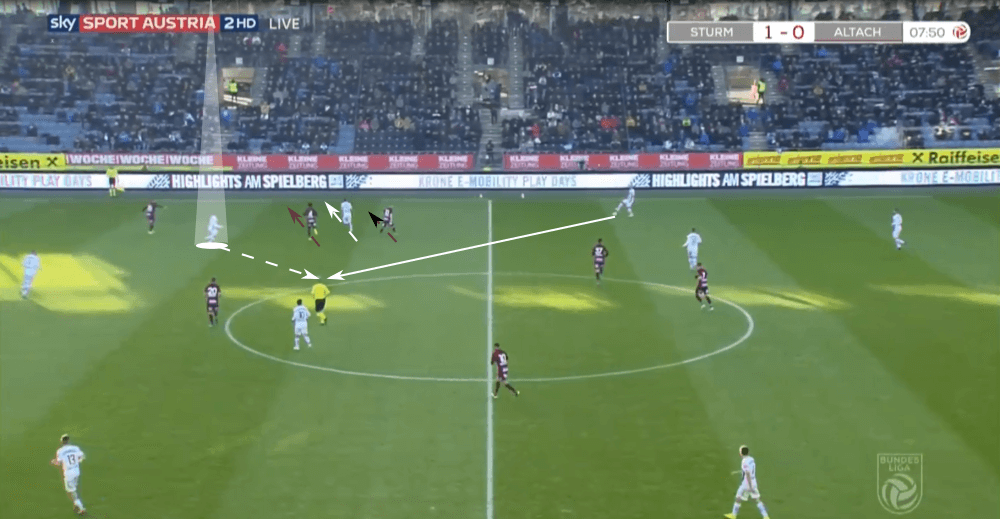 As we will see at a later stage of this tactical analysis, Despodov is incredibly dangerous in the final third which the stats already tell as he scored one goal every 126 minutes this season in the Austrian Bundesliga. One reason for that is his intelligent positioning. While we saw in the example above that he often positions himself in free spaces in deeper areas to open up short passing lanes for simple passes, we can see in the following shot a similar principle in the final third.

Moments ahead of this shot, Despodov used his great acceleration to get into the centre and away from WSG Tirol’s Felix Adjei while he stayed onside to receive a pass from Bekim Balaj. In this situation, he exploited once more his incredible acceleration to get into the free space and we’ll see in the other sections of this tactical analysis too how he uses this physical quality to get and advantage out of it. 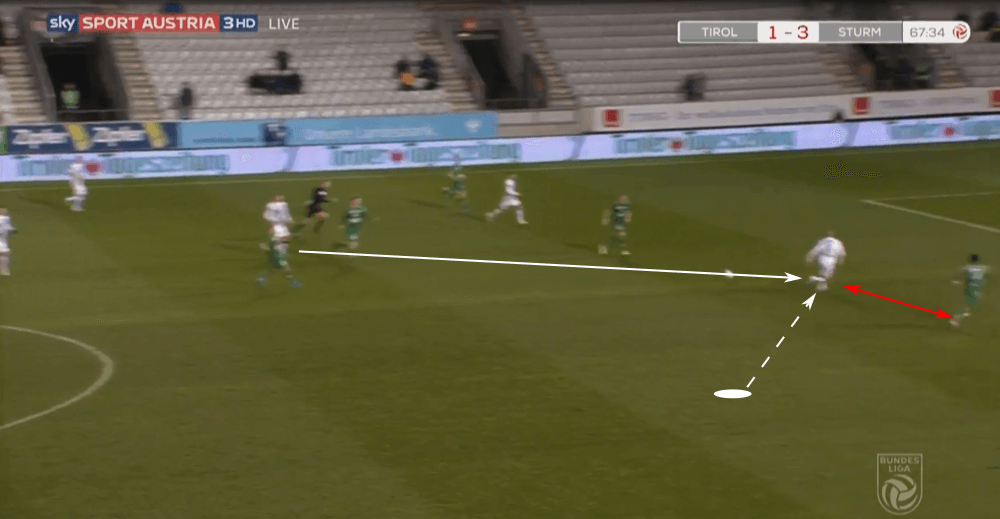 Abilities on the ball and surprising actions

As we talked about the positioning and the movement of Despodov in the first part of this scout report, we’ll now look at his abilities on the ball and how he combines these with his acceleration and vision.

Basically, the Bulgarian international is clearly the most dangerous when he has the ball at his feet since you sometimes have the feeling that he is then faster compared to the moments without the ball. While his sprint speed is also quite good, his acceleration is even more outstanding, and he is definitely aware of that. Due to that, we can often see how he gets past an opponent with the ball at his feet like in the example below where he starts his dribble slow to then start into one direction and the defender can stop him due to his great acceleration.

Also notice in the situation below how he recognizes the overlapping run of his teammate which forces the opponent to cover the wing at least a bit and he also detects the free space in the centre in which he dribbles. 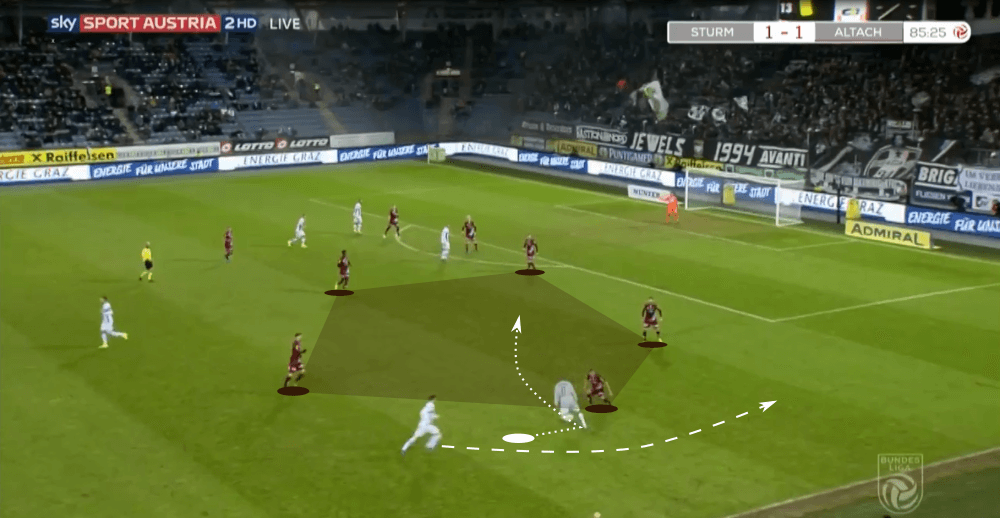 Considering this, the example above shows us perfectly how he combines his dribbling skills with his vision and how fast he can pick up speed with the ball at his feet. However, in the light of this, it makes perfect sense that his first touches are also often incredibly effective since in this situation he can once more make use of these three qualities.

Despodov is a classic winger who likes to do surprising actions or tricks like step-overs. Sometimes you have the feeling that he wants to humiliate his opponent by getting past him in a special way that often leads to surprising and interesting moves. In the example below, we can see such one as he receives the ball and turns with the first touch perfectly around his opponent to then use his speed to get away down the touchline into the free area. 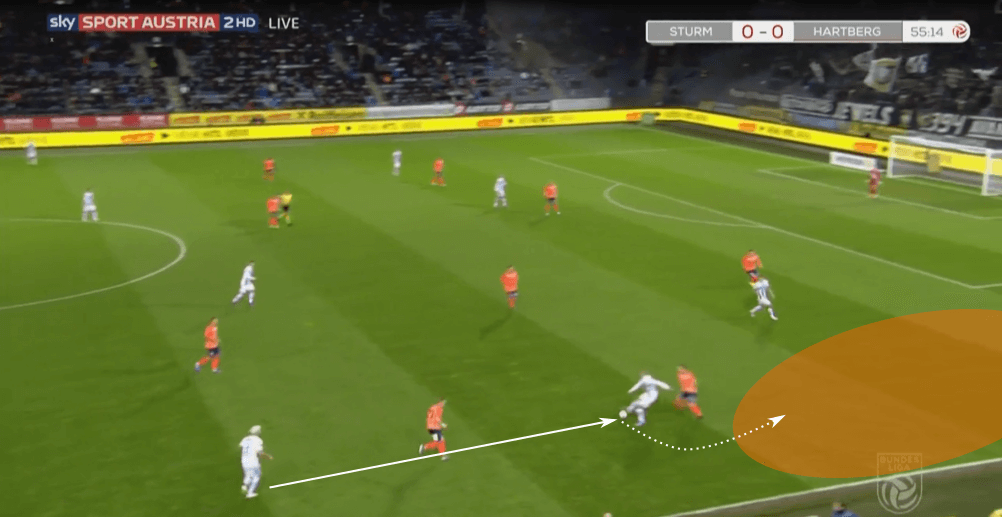 His first touch with the ball is especially often quite interesting as he tries to show off his skills. He doesn’t just do so with dribbles and turns, but also with passes. The Bulgarian plays 15.95 passes per game which is an astonishingly low value, but we’ll take another look at that in the following and last section of this tactical analysis.

However, whenever he passes the ball, he wants to make it look at least a bit special like this one with the back heel in the example below. 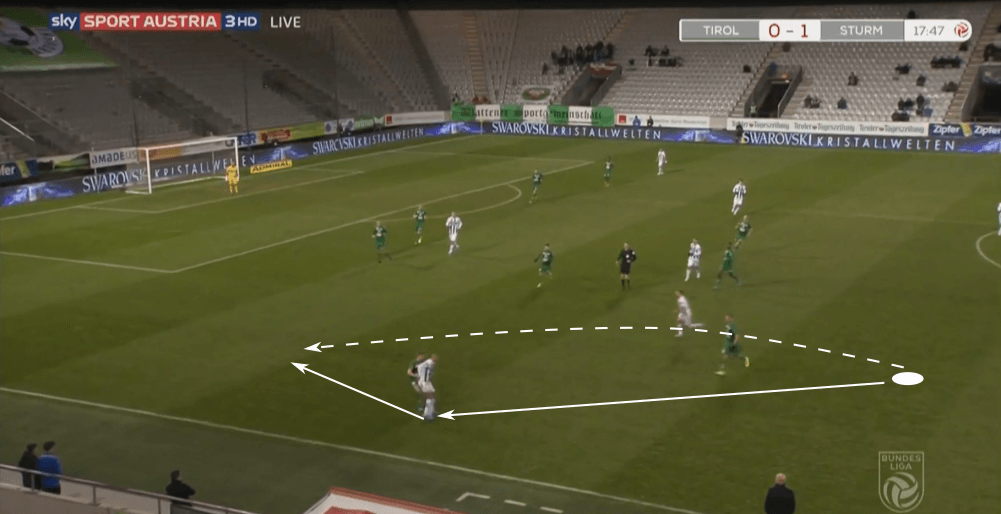 Directness in the final third and goal threat

In this final part of the scout report, we’ll take a closer look at Despodov’s directness and goal threat which are two major parts of his style of play and tactics. While he often tries to provide options for through passes or drops a bit deeper to open up short passing lanes, the Bulgarian’s style of play completely changes as soon as he enters the final third.

The 23-year-old winger is clearly not a player who likes to combine that much with his teammates as the statistics tell as he just plays 15.95 passes per 90 minutes, but it gets even more drastically whenever he gets into the area near the opposition’s goal. Especially when he gets on the ball in a central area around or in the penalty box, Despodov’s directness is noticeable. In his passing map for his last appearance against Altach before he got injured, we can perfectly see this. In the area marked in the graphic below, you can see that over the full time he played in this area just four passes and all of them weren’t successful.

We can perfectly see that in a deeper area on the right wing he supported his teammates during the build-up and that he chose several times the simple option. This passing map perfectly sums up the following section.

Whenever the Bulgarian international enters the above-marked zone, he almost forgets about his teammates and dribbles until he gets into a good goalscoring position. While that sounds quite negative, that’s not the whole story as he has the quality to be extremely dangerous in such situations since he has the abilities on the ball, incredible acceleration and a clean finishing which we will look at next.

Considering these aspects, he is quite effective in some situations like the one below as he makes just one little cut to the outside while he is almost at top speed to give the defender no chance to get into the duel and then he scores with a beautiful shot. 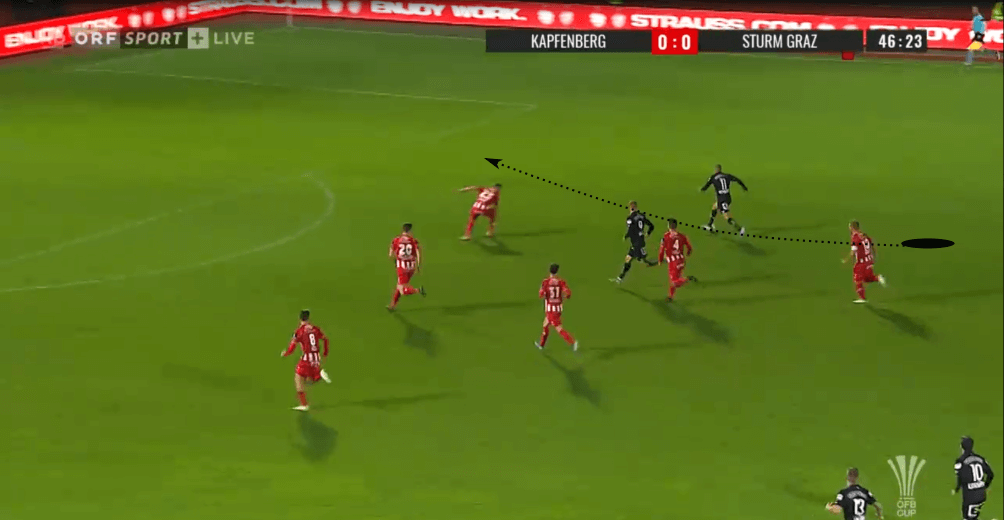 However, this directness in the final third is sometimes Despodov’s greatest enemy as he completely misses the right moment to get rid of the ball, and this can also be seen in the statistics. The Bulgarian starts on average 8.32 dribbles per game which is the third-highest value in the Austrian top-flight as only former Bundesliga star Sidney Sam and Hartberg’s Jodel Dossou start more dribbles per 90 minutes.

However, he has just a success rate of 39.7% which is disappointing compared to his abilities. The main reason for that is that he often starts dribbles in the final third even though it makes almost no sense as he is alone against two or three opponents as in the example below.

The goal threat of the 23-year-old is quite astonishing because of two aspects: his intelligent movements in the penalty box and his clean finishing. Despodov scored in this season several goals which were conversions of crosses into goals with just one contact. In these situations, the 23-year-old benefitted from his intelligent movements in front of the goal as we can see in the situation below in which he detects the free space and receives a perfect low cross to score. 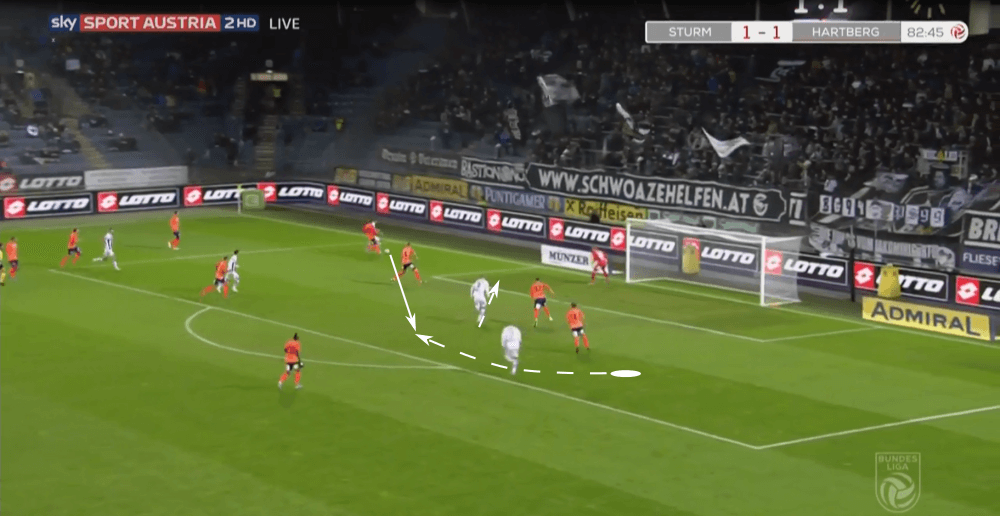 The second aspect which makes him such a threat for the opposing goalkeeper is his clean and simple finishing. Despodov never tries to score with power, but always wants to beat the keeper with a clever shot. No matter if he is in a one-on-one situation with the opposition’s goalkeeper, receives a cross or shoots from outside the penalty box, the Bulgarian tries to place the ball in the corner.

Of course, he tries to combine it with a certain power like in the situation below, but he focuses very much on where to place the ball in the net. 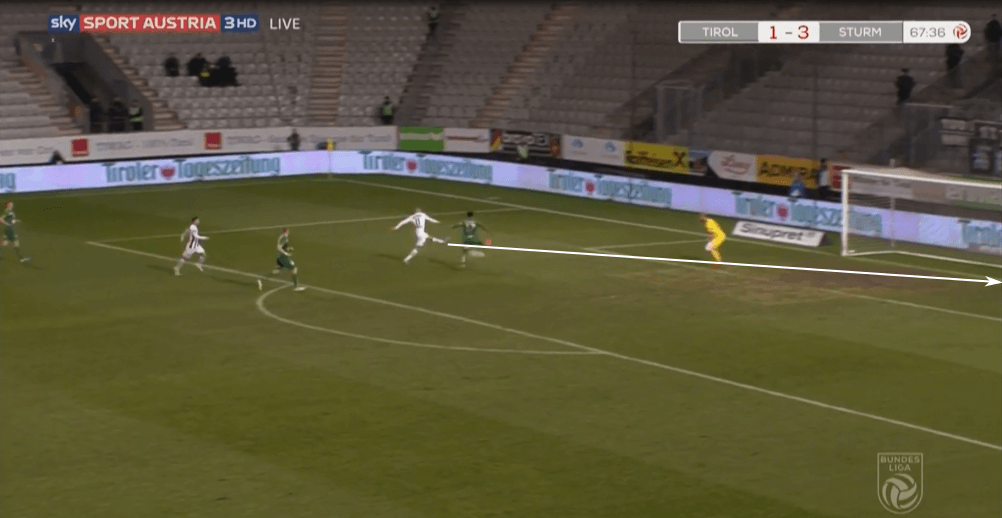 In a nutshell, Despodov was one of the most interesting players in the Austrian Bundesliga this season. If he returns to Cagliari at the end of this season and Sturm Graz are not able to buy him, I don’t expect him to get that much time on the pitch in the Serie A. He has got the quality to start for Cagliari, but he should learn that just because he gets near the penalty box doesn’t mean that he must solve it on his own.

When he can work on this one great weakness, Despodov has the quality to also maybe become a regular starter. However, it would be outstanding for Sturm Graz if they are able to get him for another season on loan or even buy him.