While we’ve had a number of midfielders and attackers in the Austrian Bundesliga make a name for themselves after their departure to bigger leagues (for example Erling Haaland at Borussia Dortmund or Sadio Mané at Liverpool), it now seems that we have several interesting young defenders in Austria.

RB Salzburg have Maximilian Wöber, Jérôme Onguéné, and Rasmus Kristensen who are three young and talented defenders. The number of promising defensive talents is now becoming prominent in Austria. One of them is the 21-year-old Luca Meisl who plays for St. Pölten. At the end of this season, he will probably return to his parent club RB Salzburg since he’s just on loan at St. Pölten, but they have an option to buy him at the end of this campaign.

In this tactical analysis scout report, we’ll take a look at the abilities of Meisl, his style of play and on what he needs to work on.

Usual positioning and reason for that

The young Austrian defender who played in the youth teams of RB Salzburg and for their second team FC Liefering before he joined St. Pölten on loan at the start of the season 2018/19, played in 64% of the time in the Austrian top-flight. Miesl is a centre-back who stands at 6’0″ that is the average for a player in his position. He was also the captain of the team of RB Salzburg’s Under 19 side which won the 2017 UEFA Youth League what already tells you that he is one of the most promising Austrian centre-backs.

When we look at his heatmap below, we can see that the 21-year-old defender usually plays more on the right side of the back three in St. Pölten’s 3-4-1-2 which they mainly use. We can also see that he is positioned quite high for a centre-back, but we’ll take a closer look at his tactics and style of play in a different section of this tactical analysis.

The three centre-backs together with the two defensive midfielders are responsible for the circulation of the ball during the first stage of the build-up as we can see below. The two central midfielders are positioned quite deep to support the three defenders. However, one big question is if they switch the tactics or system in the future as the head coach Alexander Schmidt got sacked last weekend as they are currently in the last position of the Austrian Bundesliga. Since the team haven’t played under the new coach Robert Ibertsberger yet, I’ll focus on Meisl’s style of play and not that much on the role he played in his team’s tactics as they may change now. 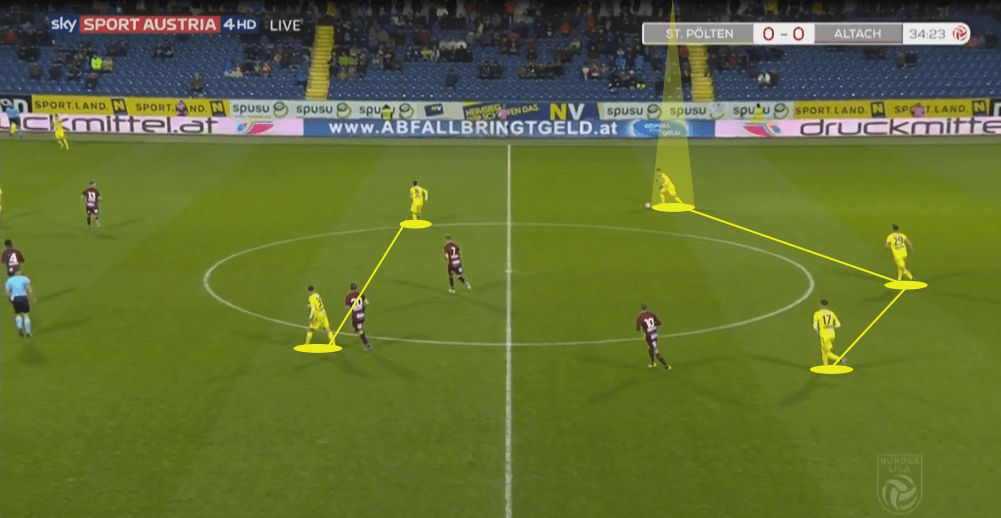 Whether his new coach opts for a back four or back three, he should use Meisl as a right centre-back. Under Schmidt, he was mostly used in a back three and you clearly see that he feels more comfortable on this side compared to the other. The main reason for that is he is way better with his right foot compared to his left one. As we will see later in this tactical analysis, Meisl is basically quite strong on the ball during the build-up, but for that, he needs to have the ball on his strong foot. As we can see in the example below, whenever he plays on the left side, he needs to get the ball always in the right position to play it with his strong foot. Even though the pass in the situation below is brilliant, he refuses once more to play the ball with his weaker foot. 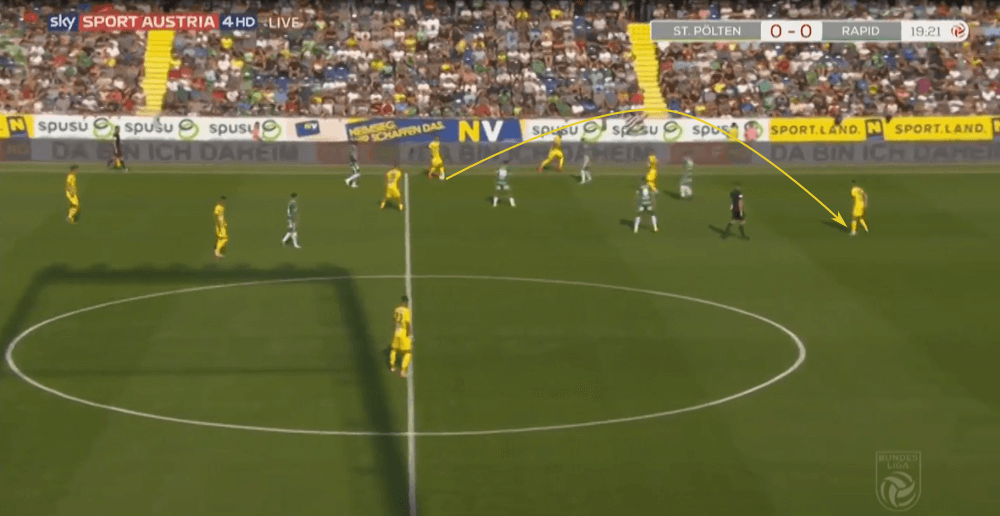 Before we take look at the abilities of Meisl during the build-up, we need to analyse how he performs the main duties of a centre-back: defending. The young Austrian is involved in 6.41 defensive duels per game and wins 69.8% (14th best value in the Austrian Bundesliga) of them what is a quite solid value especially for a young player.

The 21-year-old makes on average 1.74 recoveries in the opposition’s half per 90 minutes. We can see him several times in games following his opponents whenever they drop deeper and there he puts pressure on them in their half. We can see such a moment in the shot below as he tracks the run of the opponent, follows him and even though he doesn’t win the ball, he forces him to a bad pass and as a result St. Pölten get back possession in a higher position.

The situation above already tells that Meisl played during his youth for RB Salzburg and their philosophy is incredibly active with and without the ball. The defender is not above-average fast for a defender and due to that he always tries to get as fast as possible in the one-on-one situation with the opponent and avoid that the player on the ball can pick up speed.

Due to that, Meisl is a centre-back who permanently tries to be active and get into duels with the opponent on the ball as we can see from the below example, where he steps out to get into a duel for the ball.

The Austrian often stays on his feet as long as possible and tries to avoid slide tackles. This is quite intelligent and shows that he is well aware of his own talents and weaknesses. After a miss-timed sliding tackle he would have no chance to get back into the duel due to his lack of acceleration and pace. This can be seen in the statistics too as he averages 0.4 sliding tackles per 90 minutes, but when he does so it has a success rate of 66.7%.

So, these numbers can tell us that he just uses this whenever there is no other option left, but if so, he’s quite good in it.

Meisl is surely among the defenders in the Austrian Bundesliga who have the best understanding of the game. In the next section of this tactical analysis, we look at his abilities on the ball.

One indicator which shows how good a defender can read and understand the game are his interceptions. Meisl intercepts passes on average 6.41 times per game, which is quite good value. We can see in the image below an example in which he detects the deep run of the opponent and knows which through ball will come next and perfectly intercepts the pass. 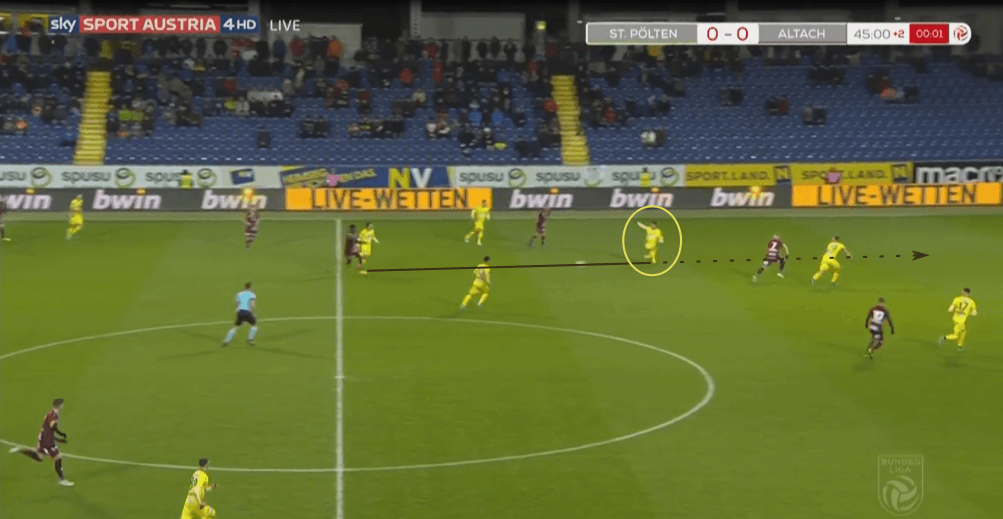 One last interesting point which stands out when we look at the Austrian’s defensive work is his fouls and yellow cards respectively. St. Pölten are the team in the Austrian Bundesliga with the most fouls per game (18.1) and the most yellow cards in this season (62 in 22 matches). However, Meisl hasn’t received a yellow card and makes just 1.07 foul per game what is one of the lowest values of all players of the Wolfsrudel. You could now think that he’s not aggressive enough in the duels, but you surely can’t say that his active style of play out of possession is aggressive. Anyway, it shows that his work in one-on-one situations is so clean that he mostly wins them and rarely needs a foul to stop the opponent.

Confidence on the ball

Now, we will take a look at Meisl’s abilities on the ball and during the build-up. First of all, you have to note that the Austrian centre-back was until now extremely important for the build-up tactics of his team. He plays on average 40.19 passes per game what is the highest value of all players at St. Pölten.

Basically, the 21-year-old defender tries to solve almost every situation with a short pass even though his opponents put pressure on him as we can see in the example below. 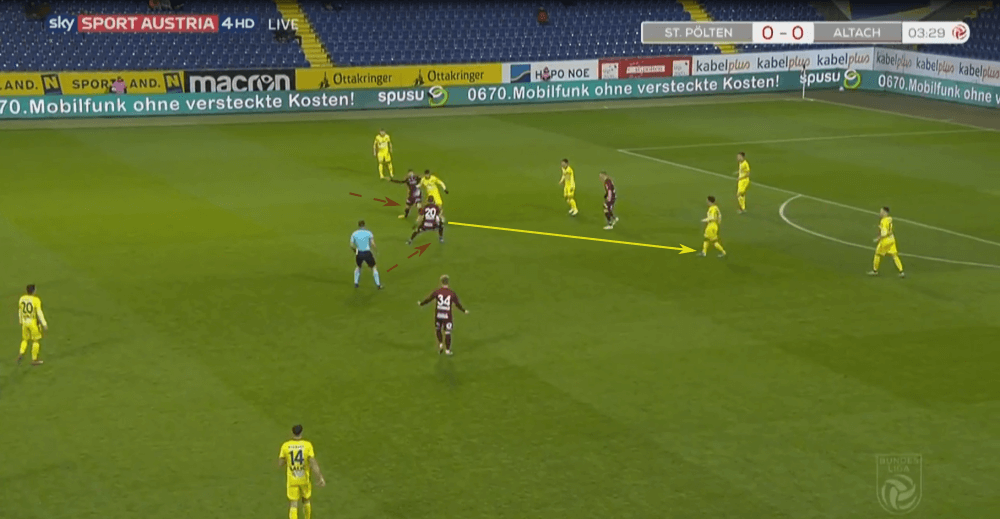 Now, we will take a look at one of his typical patterns and movements which also explains his heatmap which we looked earlier in this tactical analysis. Usually, Meisl is the one who receives the ball from the goalkeeper or one of the other two centre-backs and then has the task to bring the ball forward and organise the build-up. For that, he often creates a triangle with the defensive midfielder on his side and the right wing-back.

The second option is how he often tries to bring the ball into the final third through dribbling forward on the right side and then he tries to find a teammate in a higher line with a vertical or diagonal, low and powerful pass. One of the main reasons he plays as the right-sided centre-back in a back three is that there he can perfectly dribble forward and pass the ball with his right foot as we can see in the example below. 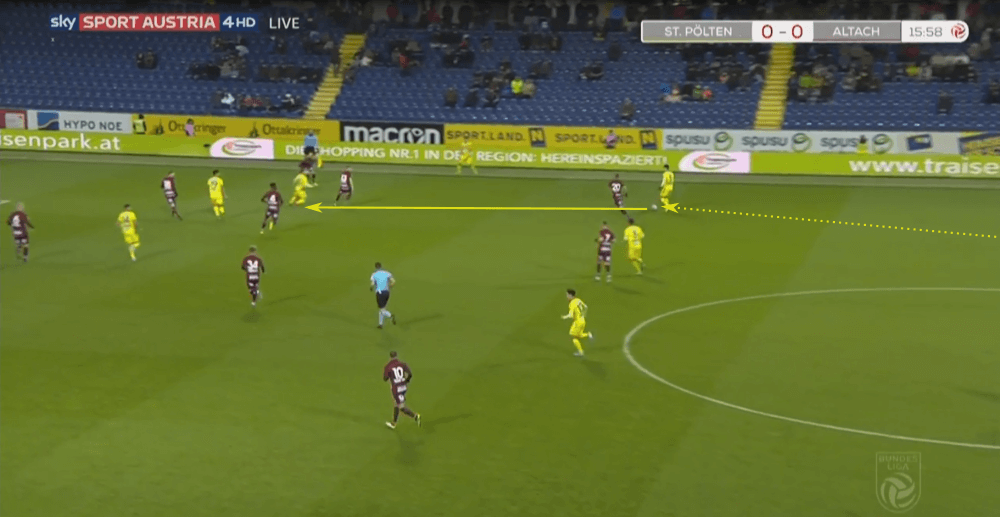 It’s also often the case that Meisl plays long diagonal balls to switch play and exploit the space on the other wing. So, his three typical actions during the build-up are creating a triangle with the defensive midfielder and the right wing-back, dribbling forward on the right side and break the opposition’s lines with powerful passes or playing long diagonal balls.

In Meisl’s passing map for long balls in the game against Altach for example, we can see accurate long diagonal passes. The young Austrian still needs to work on his behaviour and tactics in possession. Quite often we can see how he plays untidy passes or that he tries to dribble past an opponent instead of playing a simple pass to his teammates. It’s good to see that a young defender like him is so strong on the ball and likes to solve situations with his technical abilities, but sometimes he seems to be a bit sloppy and should go for the simple option instead of the risky one.

All in all, Meisl is clearly one of the most promising defenders in the Austrian Bundesliga. However, at 21 years of age, he’s not among the very young talents and he needs to show good performances on a regular basis. In general, it will be very interesting to see if he joins St. Pölten as they have the option to buy him or if he returns to RB Salzburg where he has to fight against other incredible talents for the place in the squad.

Anyway, one deciding aspect will be how he will fit into the tactics (if they massively change) of the new head coach Ibertsberger. Basically, he is clearly the defender in the squad who is the strongest and most confident on the ball during the build-up. Due to that, I expect him to be an important player for St. Pölten in the remaining games as they fight to not be relegated.