After joining Norwich City in August last year from Bundesliga side Werder Bremen, Josh Sargent seemingly struggled to adapt to life in the Premier League. After making his debut against Liverpool, Sargent scored his first and only Premier League goals in January 2022 in a game against Watford.

Finishing the season with 2 league goals to his name, the American international would have hoped to score more. The 2022/23 Championship season has got off to an explosive start for the young forward with 4 goals already. Norwich are looking to bounce back to the Premier League following their relegation and Sargent is looking like he could be the talisman they need.

Sargent is developing into a real threat at the top end of the pitch. He has been utilised as a winger and as a ‘9’. Most of his minutes in the Premier League switched between the two positions but this season, he has mostly been used as the frontman in Norwich’s attack. 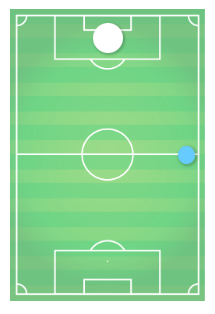 This season, over 70% of his minutes have been played as a ‘9’ in Norwich’s attack. In this campaign, the Canaries have used a 4-3-3 or a variation of this. This formation can lead to attacking isolation while playing as a solo striker. Sargent has adapted well and is able to get himself into games.

His position on the pitch is often seen to be in wide channels. This is down to his time deployed as a winger. Sargent likes to pick the ball up in these wider areas where he can get more time on the ball. As you can see on the heatmap, he is very comfortable dropping deep to receive the ball. 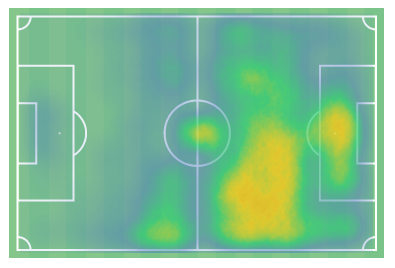 The strong heat mark in the box is key to his play style. He is most dangerous in the box and his positioning and role in the team enable him to do this.

As a young forward player, moving to England can be difficult due to the physicality. Sargent stands at 6’1” tall which is a great height for a modern-day ‘9’. Although he is quite slight he puts himself around and is no easy pushover. The 2022/23 Championship season could be the one where he makes a name for himself in England.

As briefly mentioned, Sargent is a massive attacking threat in the Championship. His ability to find space in the box and time his runs sets him apart from other strikers at this level. The perception that Championship strikers need to be big, strong target men is blown out of the water with Sargent’s style of attacking play.

Parts of Sargent’s game are really old-school in the sense that he does what a striker should do, get in the box and score. He rarely looks to take opportunities away from the box and he is aware that being in the box when play is high up the pitch is the most important thing. He likes to drop deep and link up with his teammates but for the most part, he is a very good poacher.

To emphasise this even more, the data visual below explains how Sargent compares to other Championship strikers in terms of, touches in the box per 90 and shots per 90. 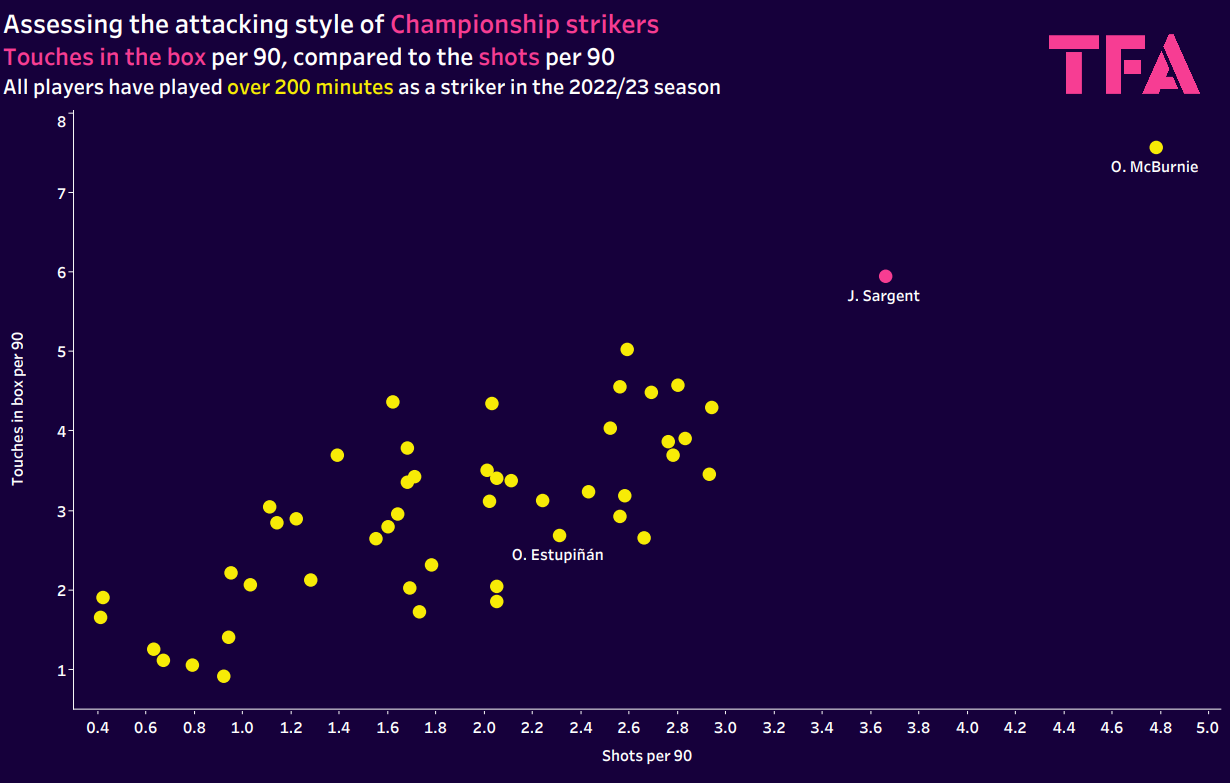 As the visual shows, Sargent ranks very highly for this metric. Only Oli McBurnie is ranked higher. This could be down to the style of play and also his physicality. Sargent, in this Norwich City side, is a great example of how strikers can play their own game whilst fitting in with the team.

Championship top scorer (as of writing this) Óscar Estupiñán, is ranked lower amongst the cluster of other strikers but has scored more than anyone else. Showing that the style of play differs dramatically in the Championship.

Of course, it needs to be taken into account that Norwich dominates the ball with an average of 63.1% possession this season. So, naturally, more chances and touches will take place. However, to continuously show for the ball and be in the right spot is a difficult task. Sargent is smart in his movement and is able to remain focused for the whole game.

His consistency and repetition of movements off the ball have paid off, rewarding him with 4 goals already. As mentioned Sargent is great at getting touches in the box and his shot map backs this up. He is clearly most effective inside the penalty area. 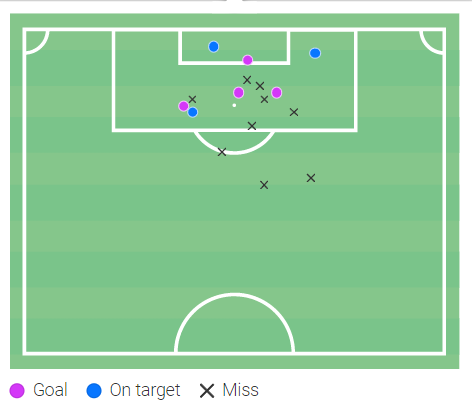 With a 40% conversion rate so far in the Championship, he is one of the most consistent performers. 16 shots totalling 4 goals is a great output. As the visual shows, Sargent is yet to hit the target from outside the box, again emphasising the importance of his in-the-box finishing and poaching ability.

Furthermore, the goals he has scored, represented by the purple dots, have all come from within the width of the six-yard box. He has not scored a goal from an acute angle and Sargent is finishing his chances well.

Strikers spend the majority of the game without the ball and it is all about how they create space and chances for themselves. Sargent is excellent at understanding his surroundings and capitalising on situations.

In and around the box, Sargent makes excellent runs and doesn’t just make one. He continues to change his direction and speed to make it difficult for defenders to mark. Below is an example of how Sargent moves forwards towards the ball before making a dart backwards as the cross comes in. By doing this he makes space for himself and is able to win a header. 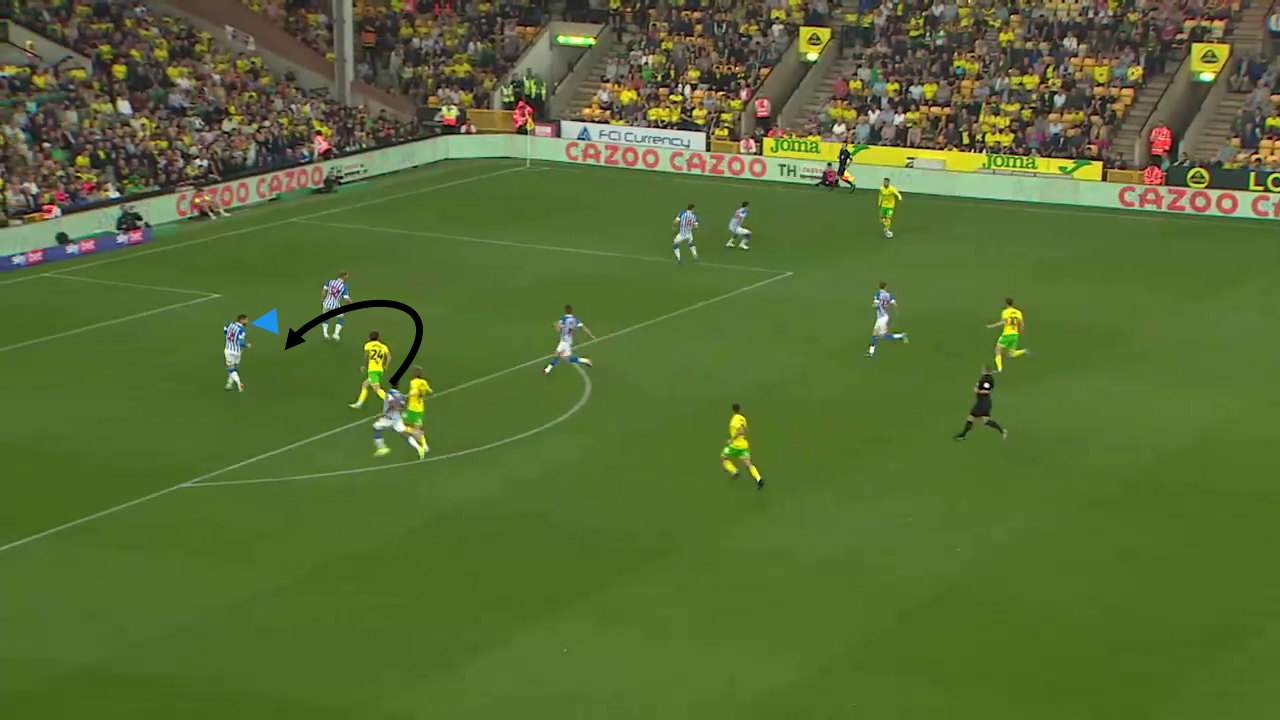 He is able to manipulate the defender and then attack the space left of him. As you can see, the defender has eyes on Sargent as he makes a move forwards, which is when Sargent changes his direction. This small detail and timing are everything in this move as the defender thinks he knows where the American is.

Not only this, Sargent is great with his back towards goal and in close spaces. He is sharp and effective in breaking down a deep block. Below, the box is crowded with opposition players and there is no space. Sargent makes a movement towards the ball, dragging his marker with him. This now creates space behind him in the penalty area. 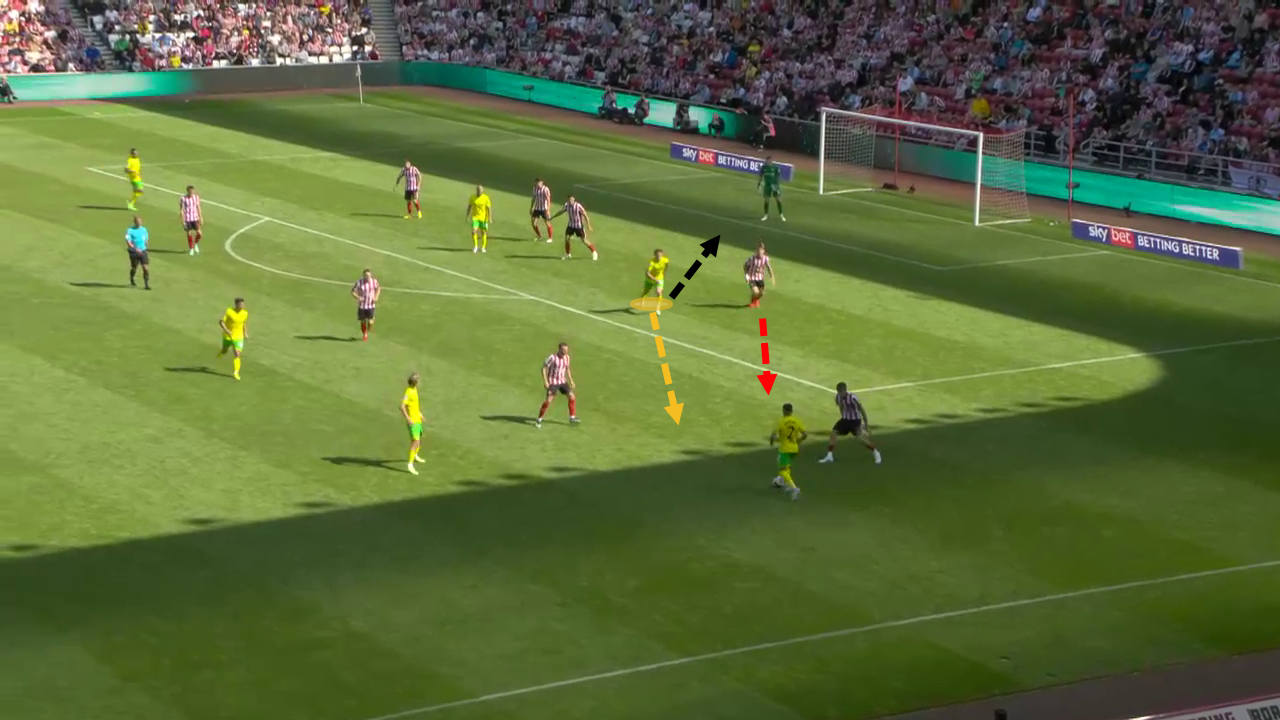 Sargent has the awareness and skill level to exploit this space. To do so, he lets the ball run across his body and into the space he has created. This now sees him baring down on goal and in the penalty area, where he is most dangerous. This particular move ends in a rash tackle from a Sunderland defender, which could have been given as a penalty.

Not only is Sargent a good finisher, but he also works hard for the team with his running. Without the ball, it can be easy to stand still and let the game pass you by. This is even more prominent during transitions. When the team look to break quickly it can be difficult to decide what’s best to do.

Sargent is calm and smart about his role. He makes a clever, selfless run which allows his teammate to attack much more dangerously. This intelligence adds value to his game and allows for him to be deployed as a solo ‘9’ due to his diversity. 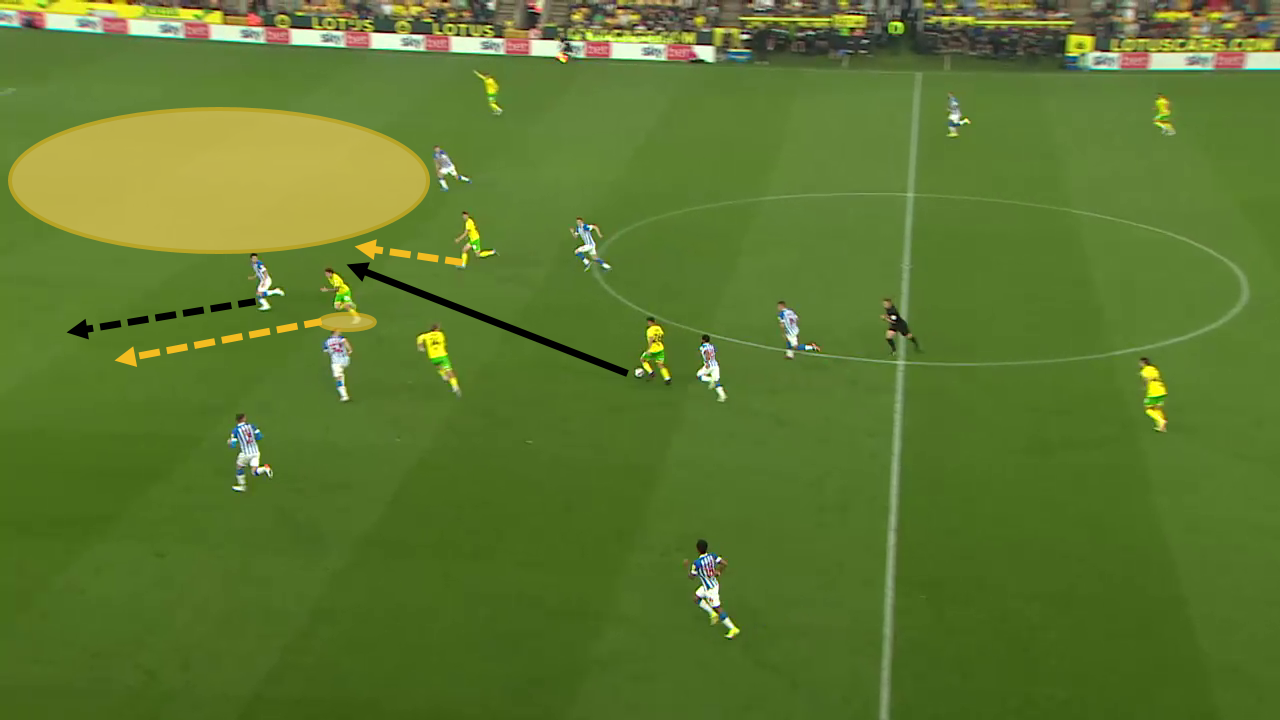 Although he loves to be in the box, Sargent is also very good at dropping deep to link-up play, something that Harry Kane does a lot. Sargent likes to come and receive the ball before finding one of his teammates, usually a winger. Below shows how he does this and links play by finding a winger. 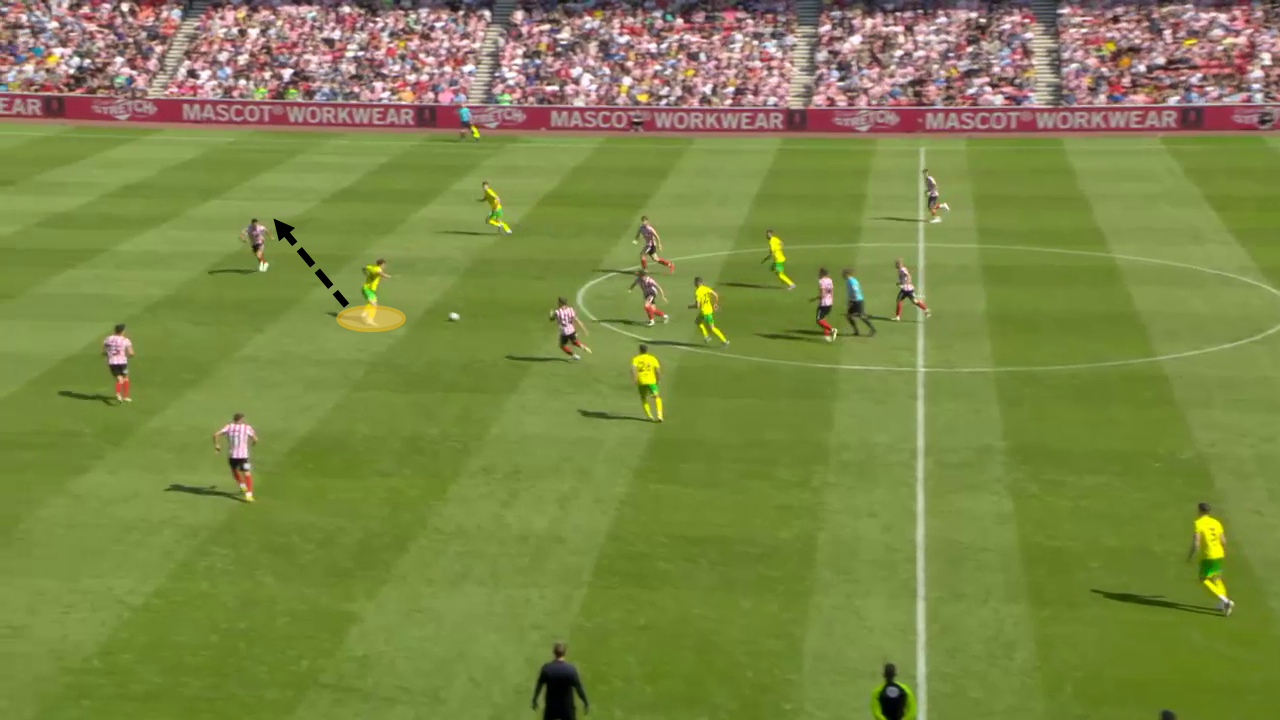 He looks to play the winger into the space behind, creating a goalscoring opportunity. He is comfortable in doing this and is clever in losing his marker. He chooses when to drop deep and times it well leading to a difficult decision for the defender. Do they go with him and come out of their defensive shape or stay and allow Sargent to turn?

This link-up play from deep is effective but Sargent is also great at combining higher up the pitch. He is able to read the game well and has great vision. This allows him to create opportunities for himself, along with his teammates, and they can combine to devastating effect.

His goal against Millwall came from a quick one-two passing combination as seen below. Sargent moved quickly and progressively into the space behind the defenders before smashing it into the net. 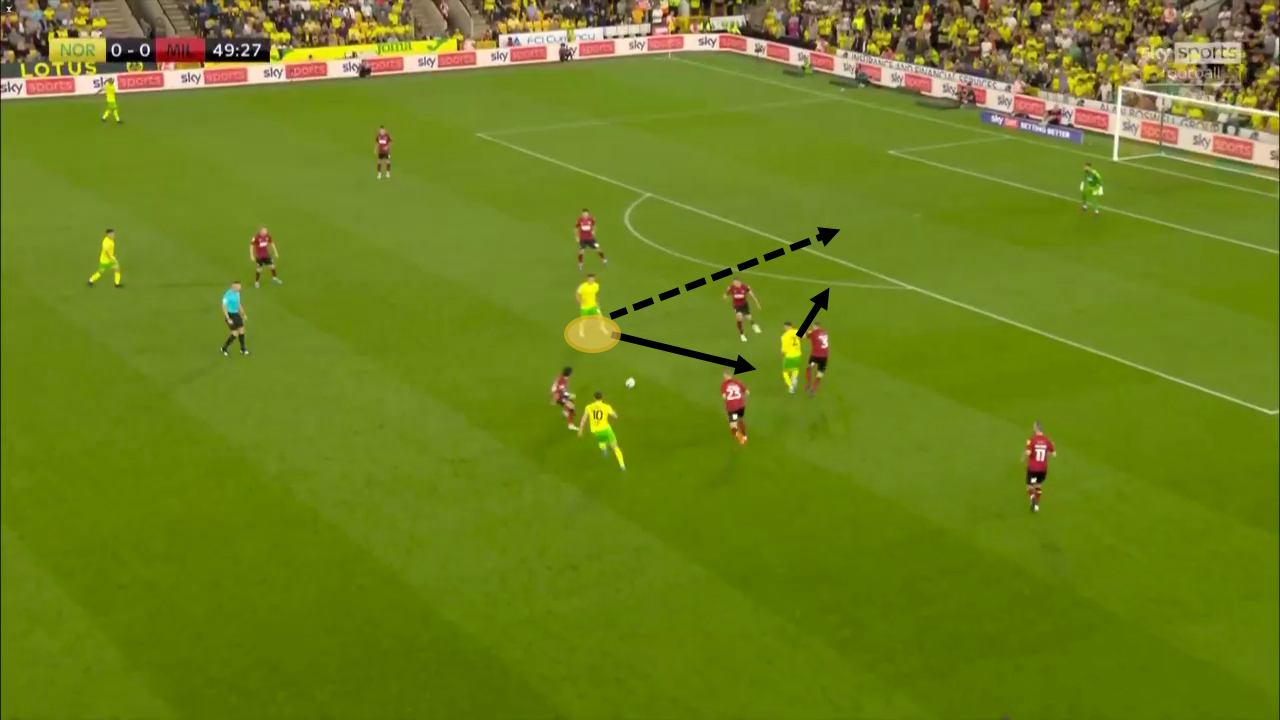 Having had a great start to the season, Sargent will be hoping to continue this fine form. Norwich are a strong favourite for promotion and Sargent’s excellent performances will go a long way toward achieving that.

He is developing into a well-rounded ‘9’ in the English game. His strengths are utilised well in the Norwich City side. With the World Cup on the horizon, Sargent could go on to have a breakout year. If he continues in the same manner, the young forward will be playing Premier League football next season, with Norwich or someone else.