Within the last two weeks, I wrote two data analyses for Total Football Analysis. The first one was about talents in Austria’s second division while the last one was on about all the Austrian centre-backs who are or could be relevant for the Austrian national team. Both times Johannes Handl was one of the players who stood out as he has amazing statistics.

Because of this, I decided to write a tactical analysis in the form of a scout report on the 21-year-old centre-back of Austria Vienna II who also made in this season three appearances for the first team. In this analysis, we will look at the tactics and the style of the play of Handl to examine the reasons for his outstanding metrics.

Before we even start to talk in this tactical analysis about the on-the-ball abilities of Handl which make him so vital for the build-up of his team or his defensive qualities, we have to look at his usual positioning and his movements. Essentially, the 21-year-old defender always plays as the right centre-back of a back four when he plays for Austria Vienna II. We will only analyse his style of play for the second team as his appearances for the first team are still not enough to really see if he is capable of playing on that level.

In the shot below we can see the heatmap of the Austrian defender and we can perfectly see that he is always the right man of the central defence. Additionally, it gets visible that he is often positioned quite wide and also high up the pitch for a centre-back.

The two centre-backs of Austria Vienna II split during the periods of possession and organise together with one of the two defensive midfielders the build-up. This one either drops on the same height of the defenders or stays a bit higher to create a triangle. Meanwhile, both full-backs push forward to position themselves in a higher line. Because of these factors, Handl is positioned wide during the build-up as we can see in the example below in which the defensive midfielder drops to create a back three. 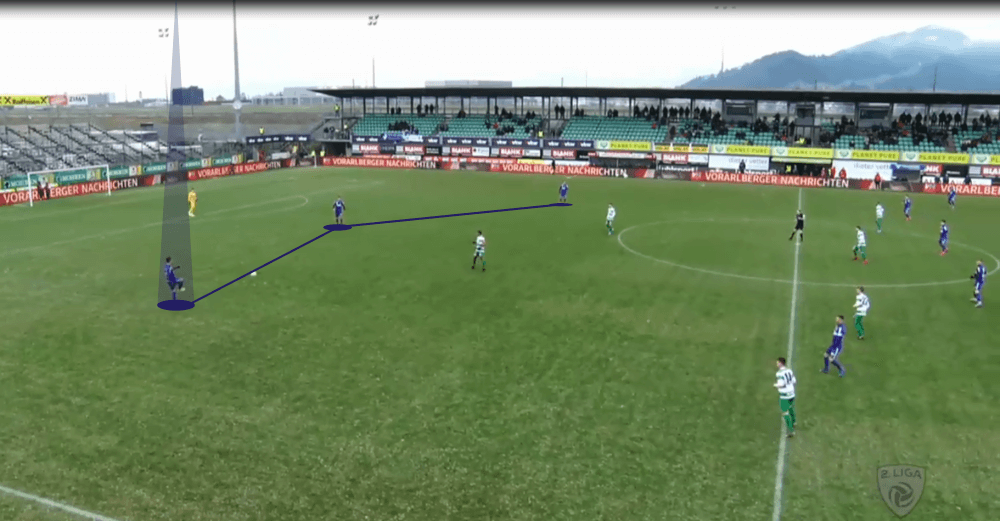 As we will see in the remaining parts of this scout report, the young Austrian defender is similar to how you would expect from a modern centre-back: strong on the ball and willing to go forward. Handl never hesitates to support his teammate and use the space in front of him if there is a good opportunity.

We have a perfect example for that in the shot below as his teammate is on the ball in the left half-space while the 4-4-2 of Austria Lustenau is horrible in this situation and a great free space is in front of Handl. The 21-year-old immediately sprints forward before he even gets the ball to make the most out of the free area in front of him and also dribbles forward as soon as he has the ball at his feet. 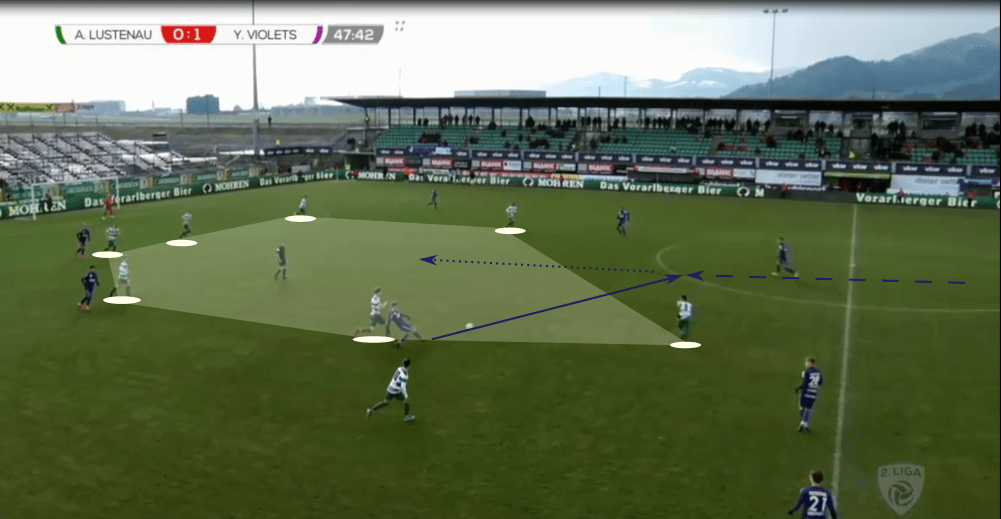 Importance for the build-up

We have seen two out of three important aspects of Handl’s tactics or style of play, so we will now get into the more detailed analysis of his strengths and weaknesses. We already talked about his usual positioning on the right side and that he has the confidence to go forward (both aspects are perfectly visualised in his heatmap for all his appearances in Austria’s second division in this season).

As the third point factor, I want to mention how calm and relaxed the 21-year-old Austrian seems to be throughout the 90 minutes on the pitch. Especially during his team’s build-up and attacks he never looks like he wouldn’t know what to do next. For me, the two first centre-backs who come to my mind and also act like that are Liverpool’s Virgil van Dijk and the captain of Real Madrid, Sergio Ramos.

Now we are aware of his usual positioning, the fact that he doesn’t hesitate to go forward, and that he always seems to be relaxed. All these aspects lead us now to the next point which is his dribbles. The Austrian centre-back starts 1.32 of them per game which is a solid value for a centre-back.

The first situation in which he usually starts to go forward with the ball at his feet is whenever there is a free space in front of him as we already saw in the first part of this tactical analysis. In these moments (like the one in the shot below), Handl rarely hesitates to make the most out of it and dribbles forward. 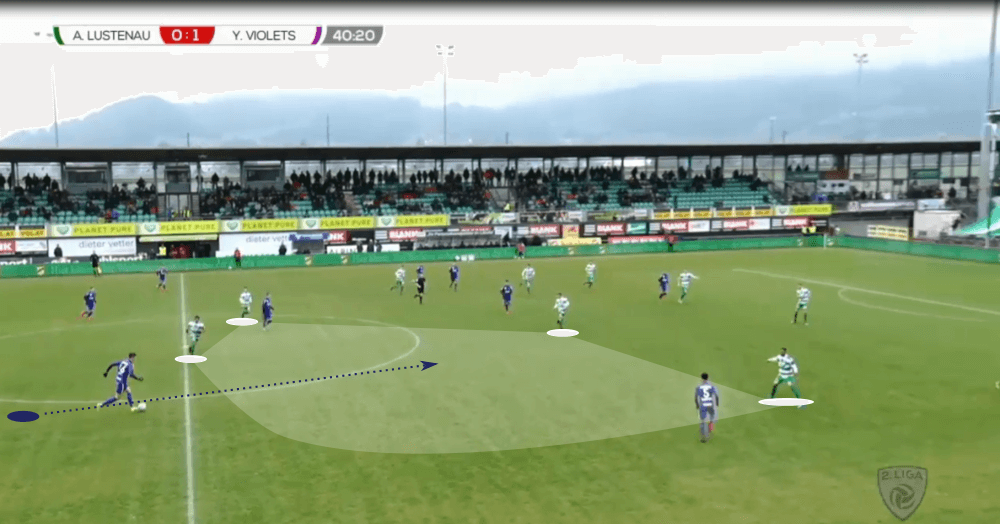 Next, the second situations in which the 21-year old Austrian takes the ball and goes forward are the complete opposite compared to the ones mentioned above: when there is no forward passing option. At first, this may sound a bit illogical but Handl wisely doesn’t just use the dribble to go through space which is free in front of him but to lure opponents out of their position to then pass the ball. This can be perfectly seen in the example below as he goes forward with the ball as his feet which leads to a movement by the opposition and his teammate getting unmarked. 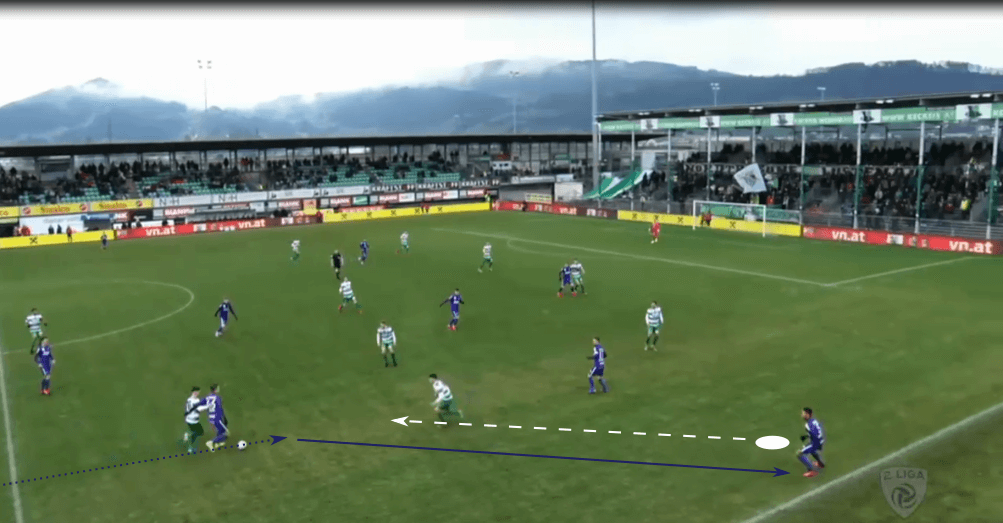 However, the 21-year-old is not just important for his team’s build-up due to his calmness on the ball as I already mentioned in this tactical analysis, but also because of his passing abilities. He plays on average 61.74 passes per game which is an outstanding value for a centre-back and additionally has a success rate of 84.7%.

The value for his successful passes is especially outstanding when we consider his high number of passes. Of course, a lot of them are simple passes to the left centre-back or a defensive midfielder, but also in situations like the one below he seems to always find the right option.

In this example, the opponents clear the situation with a long ball which Handl intercepts and Austria Lustenau’s players immediately start the press. The Austrian stays calm, controls the ball with a good first touch, and plays a simple but effective pass. 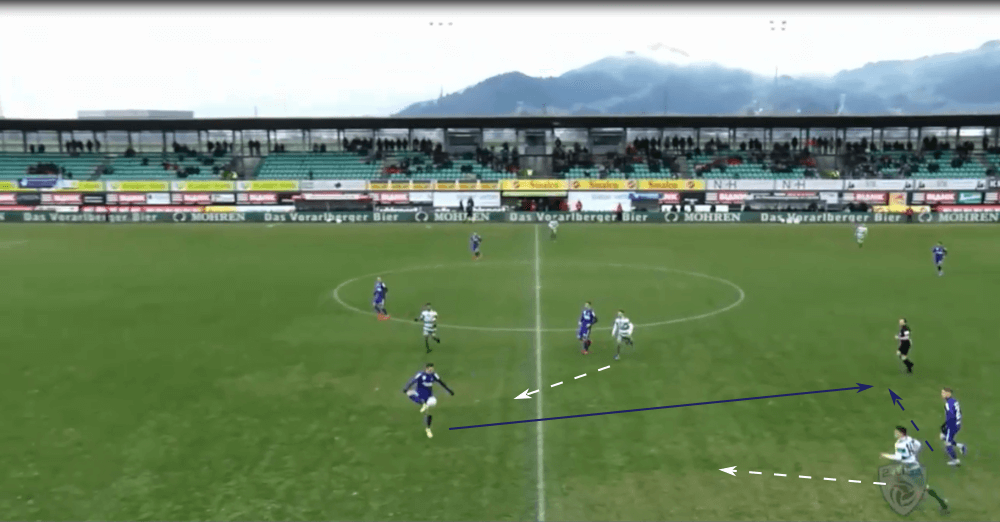 It’s often Handl’s task to play a penetrating pass to progress the ball further up the pitch. The especially good thing is that the Austrian’s ability to play good forward passes perfectly fits into the tactics of Austria Vienna II as they want to get into the final third with the aid of these balls. 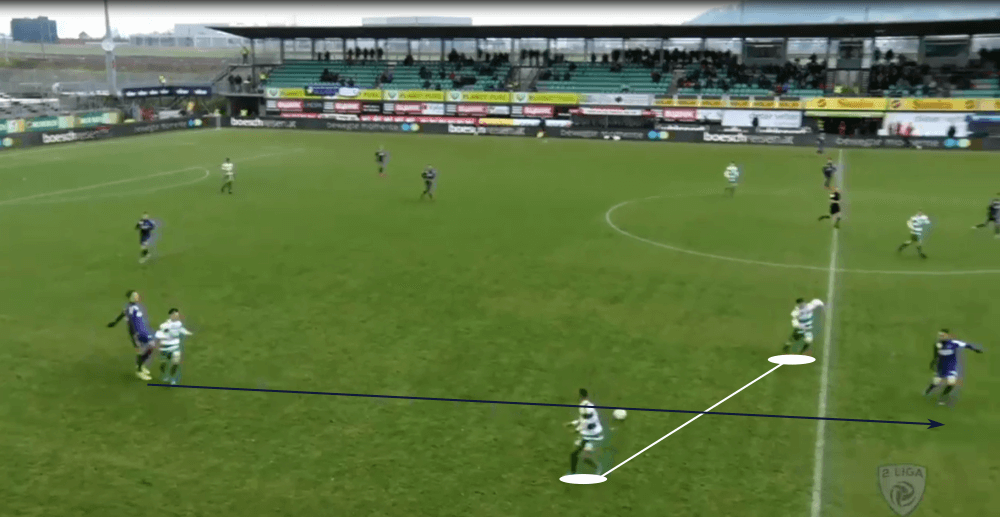 However, it is clear that every single football player, especially a 21-year-old, has not just strengths but also weaknesses. When we talk about Handl’s impressive qualities on the ball, we also need to mention that there are two major weaknesses. Firstly, he tries to solve every single situation with his right foot as you probably already noticed. The fact that he is so strong with his right foot is also the main reason why he plays as the right centre-back. However, he clearly needs to work on his left foot as it would make him more variable and offer him more solutions in different situations.

The second weakness, which is by far not that drastic as the first one, is that his long balls for which he has a success rate of 50.4%. That’s not a bad value and his long balls are clearly not that bad that you would say that this is a clear weakness, but I wanted to mention them as they are still not on the same level as his (forward) passes and the ability to dribble.

In the last section of this tactical analysis, we’ll take a closer look at Handl’s defensive game. Just the fact that he makes an outstanding 15.57 recoveries per 90 minutes already tells us that we need to analyse his defensive style of play.

Even though it gets more and more important nowadays that a centre-back is confident on the ball and is able to progress the ball further up the pitch by using passes or dribbles, the defensive abilities are still something important when we talk about a central defender.

As we already saw in the prior part of this tactical analysis, Handl’s understanding of the game is probably one of his greatest strengths. Of course, his technical qualities to execute his decisions are great, but the fact that his decision-making is so solid is surely the most interesting part of his game. Exactly that understanding of the game and the decision-making are also so vital for him in the moments of the defending.

He wins 71.8% of his aerial duels which is a great value but still, he just goes into a duel if it is necessary. In the example below, the striker is the only man of the opposition who is positioned higher and due to that Handl doesn’t even jump but just slightly pushes the opponent, so he can’t touch the ball and his teammate behind him receives the pass without any pressure of an opponent. 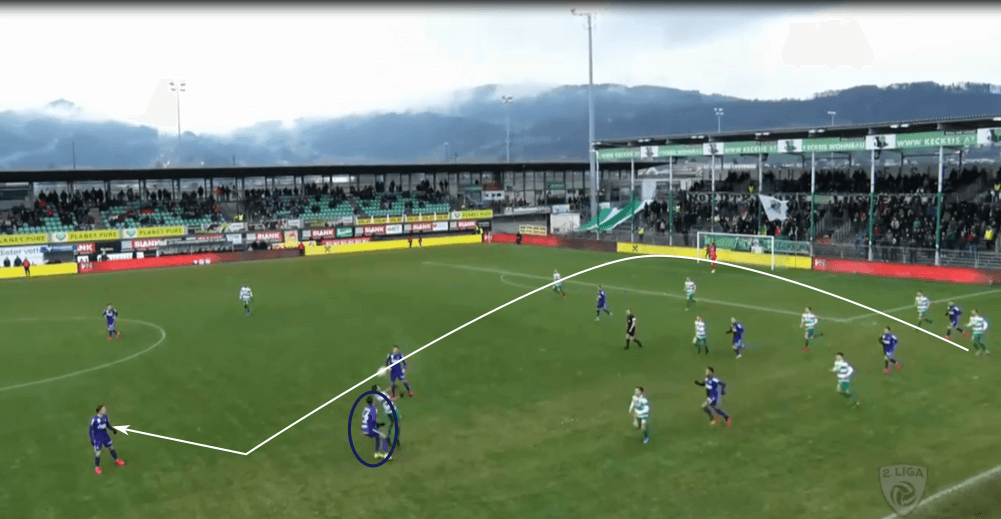 This situation is a perfect example of how the 21-year-old defends as it is not always his ability in the air or the defensive duel to win back the ball for his team, but rather his decision-making. Furthermore, the Austrian makes 10.98 interceptions per 90 minutes – a quite high value and interceptions are a good metric in which we can see (at least a bit) if and how well a player can read the game.

So, the statistic tells us that the 21-year-old often wins back the ball for his team by knowing what the opposition will do next and then he is just one step ahead as we can see in the situation below in which he steps forward to intercept the pass. 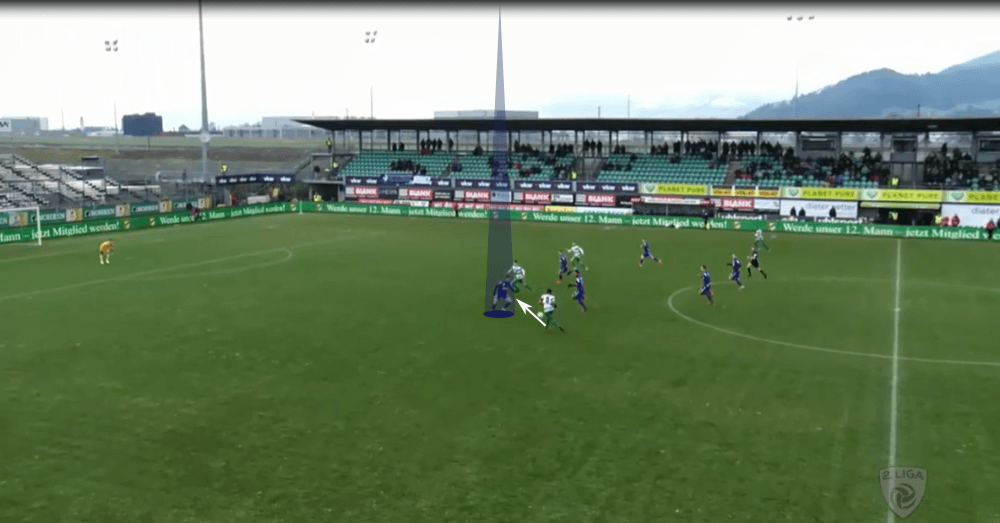 Also, the example above once again shows us that the 21-year-old has the confidence to go forward, no matter if it is with the ball at his feet or to intercept a pass.

The Austrian centre-back has a success rate of 80% in defensive duels, an incredible value. However, you always have to look at all the relevant stats to understand them and in this case, you need to consider that he is just involved in 4.67 defensive duels per 90 minutes which is an extremely low value for a centre-back.

All in all, you just have to admit that Handl is one of the greatest Austrian talents in the position of the centre-back and it’s hopefully just a matter of time until he gets his chance to become a regular starter for the first team of Austria Vienna. His understanding of the game and incredible decision-making are clearly, besides his technique, his greatest strengths while he needs to work on his left foot. This would make him more variable and even more effective for his team during the build-up.

It will be interesting to watch what will happen when the Corona crisis is over as hopefully, he will get more appearances for Austria Vienna as he has the talent and qualities to become one of the best centre-backs of the Austrian Bundesliga. However, they need to give him the chance, so we can see if he is ready for the next step in his career.