With the end of the NWSL 2020 Challenge Cup, it seems that a wave of elite players will now be moving to Europe to continue play. One eye-catching transfer is the potential move of Jess Fishlock to Reading in the FAWSL. Through tactical analysis, we will look into how Fishlock may create an immediate impact alongside her fellow Welsh internationals Natasha Harding (captain), Angharad James, Rachel Rowe and Lily Woodham.

We will see that not only has Fishlock travelled the world and created an immediate improvement in multiple team’s attacking tactics but that she is able to improve teams when out of possession as well. This scout report will look at exactly how she does it.

Fishlock has had a long and adventurous career spanning the globe. Born in Cardiff, she made her senior debut with Cardiff City LFC at age 16. She quickly helped her hometown club to become Welsh Cup champions and subsequently Champions League participants. In 2008 she was drawn to AZ Alkmaar in the newly formed Eredivisie Vrouwen, becoming the first overseas player to be signed in the league. In her first two seasons in the league, she won back to back league titles. Fishlock returned to the UK in 2011, joining Bristol Academy WFC, reaching the FA Cup final and winning the 2011 Club Player of the Year.

From there Fishlock moved on to the Melbourne Victory in 2012 where she helped the club to reach two Grand Finals in a row, winning one (2013). During the 2013 season, she was acquired by the Seattle Reign, who Fishlock helped towards winning the 2014 and 2015 NWSL Shield. Both seasons saw Reign lose in the championship game with Fishlock being included in the 2014 NWSL Best XI.

With Reign, Fishlock entered a cycle of playing the full NWSL season with Reign and then going on loan in the offseason. Fishlock has played with Glasgow City, FFC Frankfurt (who she earned a UEFA Champions League medal with, in 2015), and Lyon (beating Barcelona to win the 2019 Champions League).

Naturally, Fishlock made an impact with the Welsh National Team as well, becoming the first Welsh player, male or female, to earn 100 caps.

Fishlock suffered a season-ending ACL tear against the Utah Royals on June 28, 2019. With that in mind, this analysis will focus on the five games leading up to Fishlock’s injury. During that span, Reign were able to gain eleven points out of a possible fifteen with Fishlock scoring 3 goals and creating 1 assist.

Fishlock’s ability as a passer elevates the ability and tactical execution of her fellow teammates. This is reflected in a few key statistics. During our five-game span, Fishlock led the team in multiple key categories. This includes through passes (“direct pass in the empty spaces behind the defensive line, leading the attacking player alone against the goalkeeper”) with 10, deep completions (basically a pass into the opponent box) with 11 and key passes (“important pass, cross, which creates clear situation and opportunity for goal”) with 5.

This is a testament to her high level of scanning and subsequent awareness of attacking spaces on the pitch. This vision paired with the technical ability to place the ball exactly where she wanted with the correct pace, helped to create many goal-scoring chances for Reign.

In their match against eventual 2019 league winners North Carolina, we see a glimpse of her passing ability. Fishlock receives the ball from a central position. In the image below we see the moment of her first touch. She has received the ball across her body and used her far foot to push the ball into forward space.

Key in this moment, is that Fishlock’s vision is already locked on Courage’s box and the three attacking movements being executed in that area. We can see that within a split second Fishlock has received the ball, set herself up for forward penetration and assessed her team’s attacking situation. 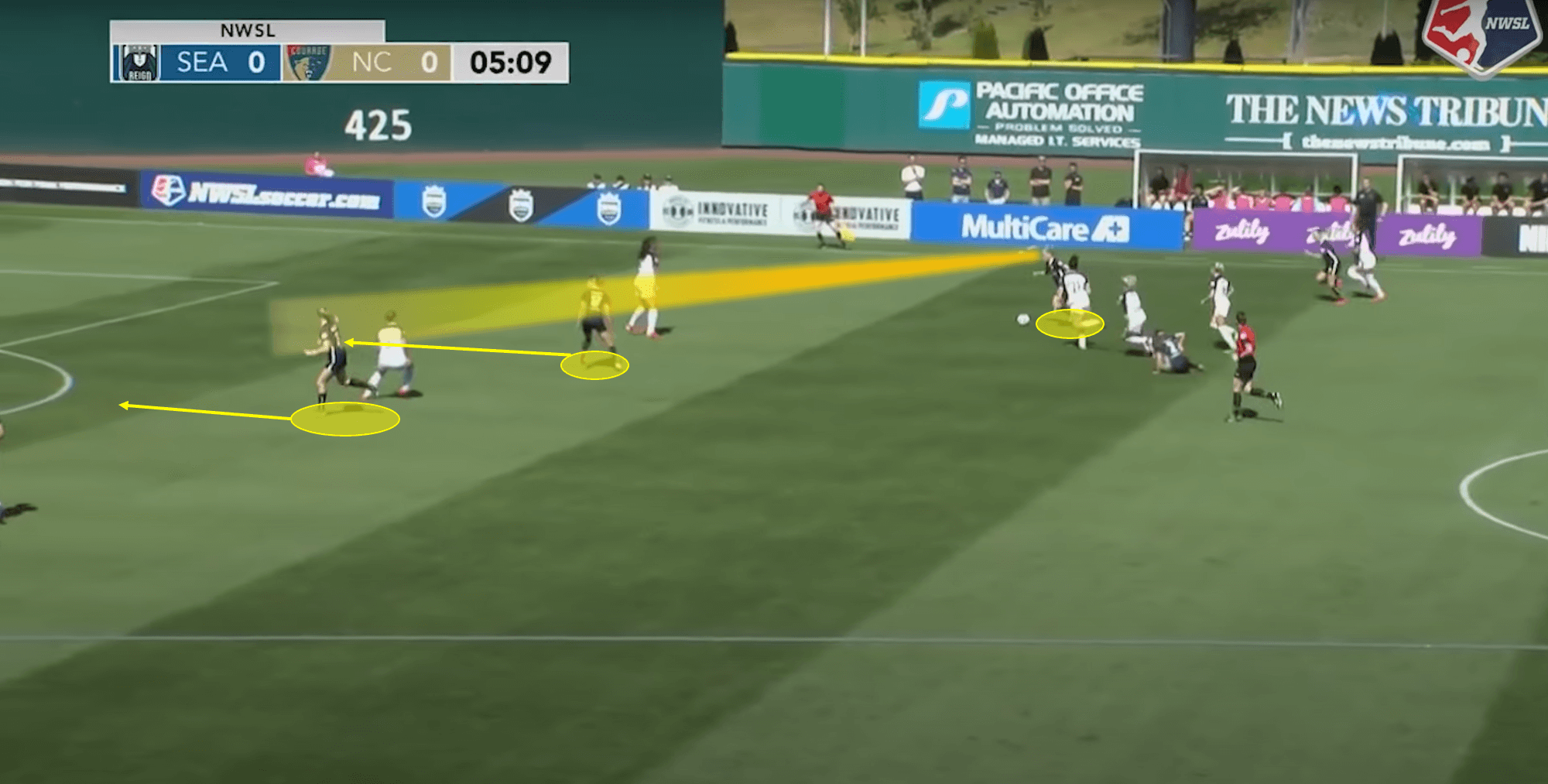 Fishlock takes one more touch to control the ball and then releases a curved pass into the path of forward streaking Bethany Balcer. Balcer uses the outside of her right foot to execute a volley that narrowly misses wide of the goal. 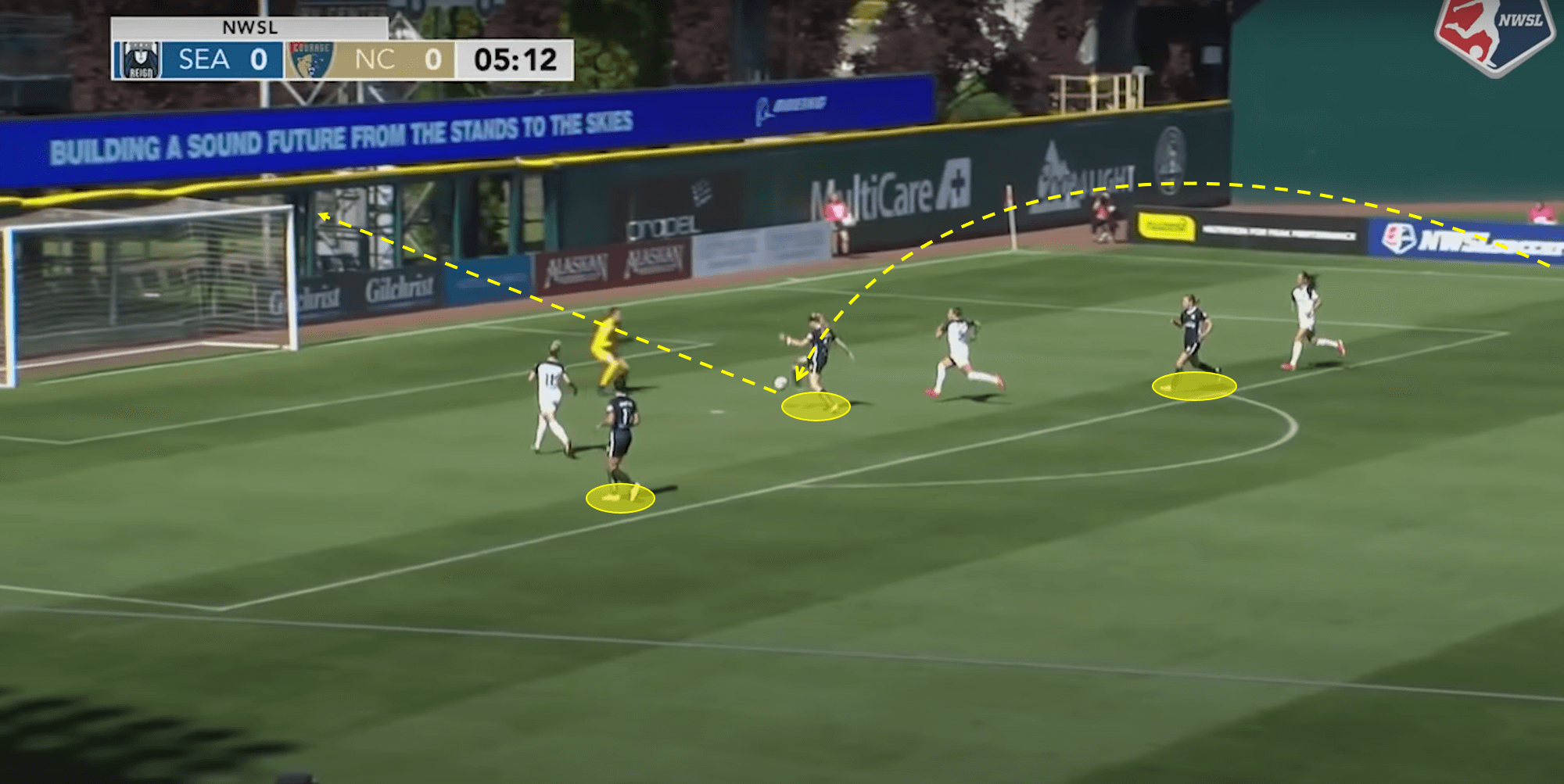 In Reign’s match against the Houston Dash, Fishlock has a moment in which she receives the ball with her back square to the opponent goal. Crucially, Fishlock has scanned the area behind her and is aware that fellow attacker Shea Groom is in position to accelerate forward into space. Fishlock is also aware that by receiving with her back to goal, she will trigger pressure from the Dash centre-back. 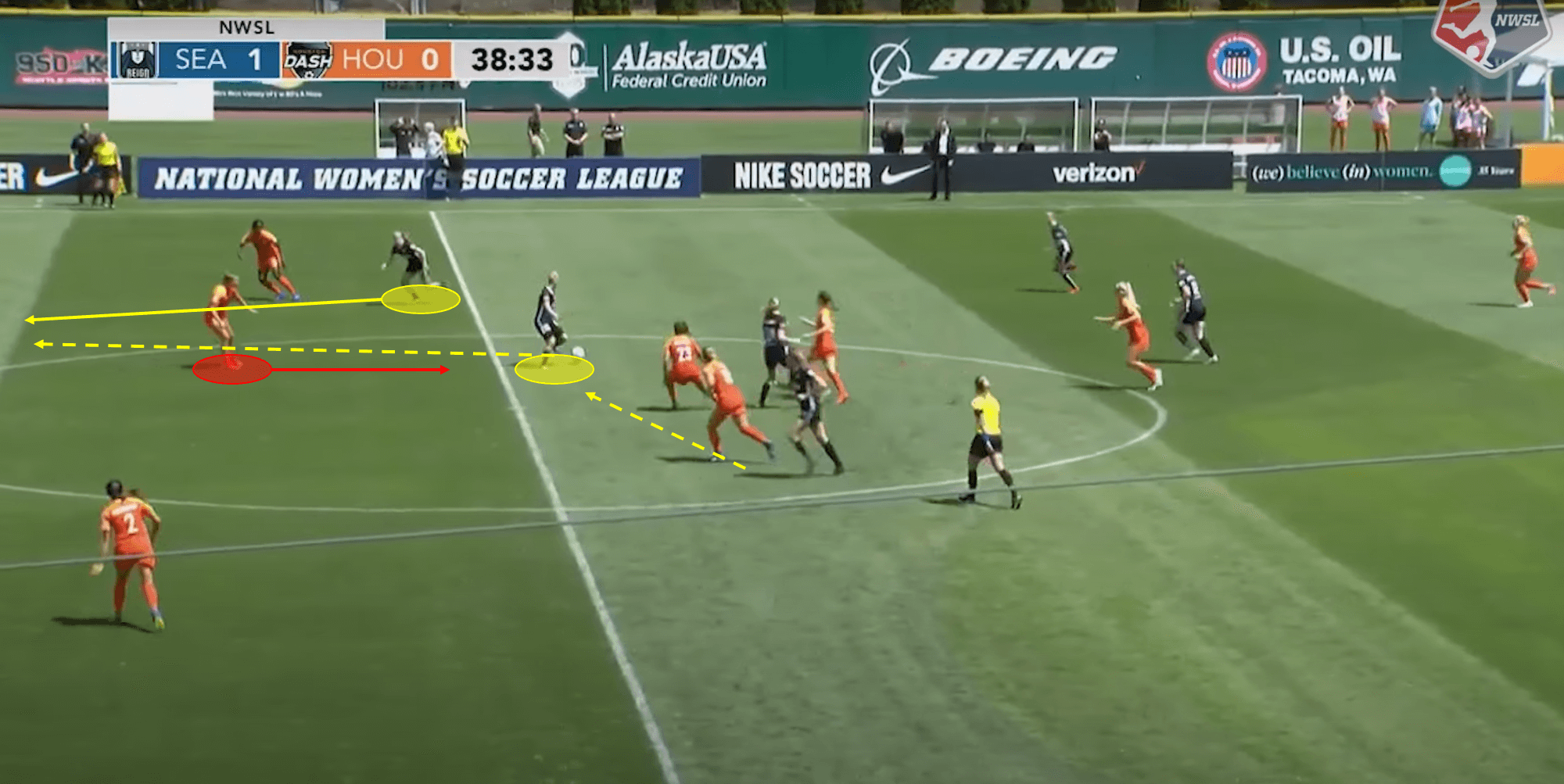 Upon receiving the ball, Fishlock does not take time to scan the area (because she already has) and immediately pivots her body to release a through ball into the space behind the Dash defensive line. In a matter of seconds, Fishlock has pulled a defender out of critical central space and placed the ball into that space for her attacking teammate. 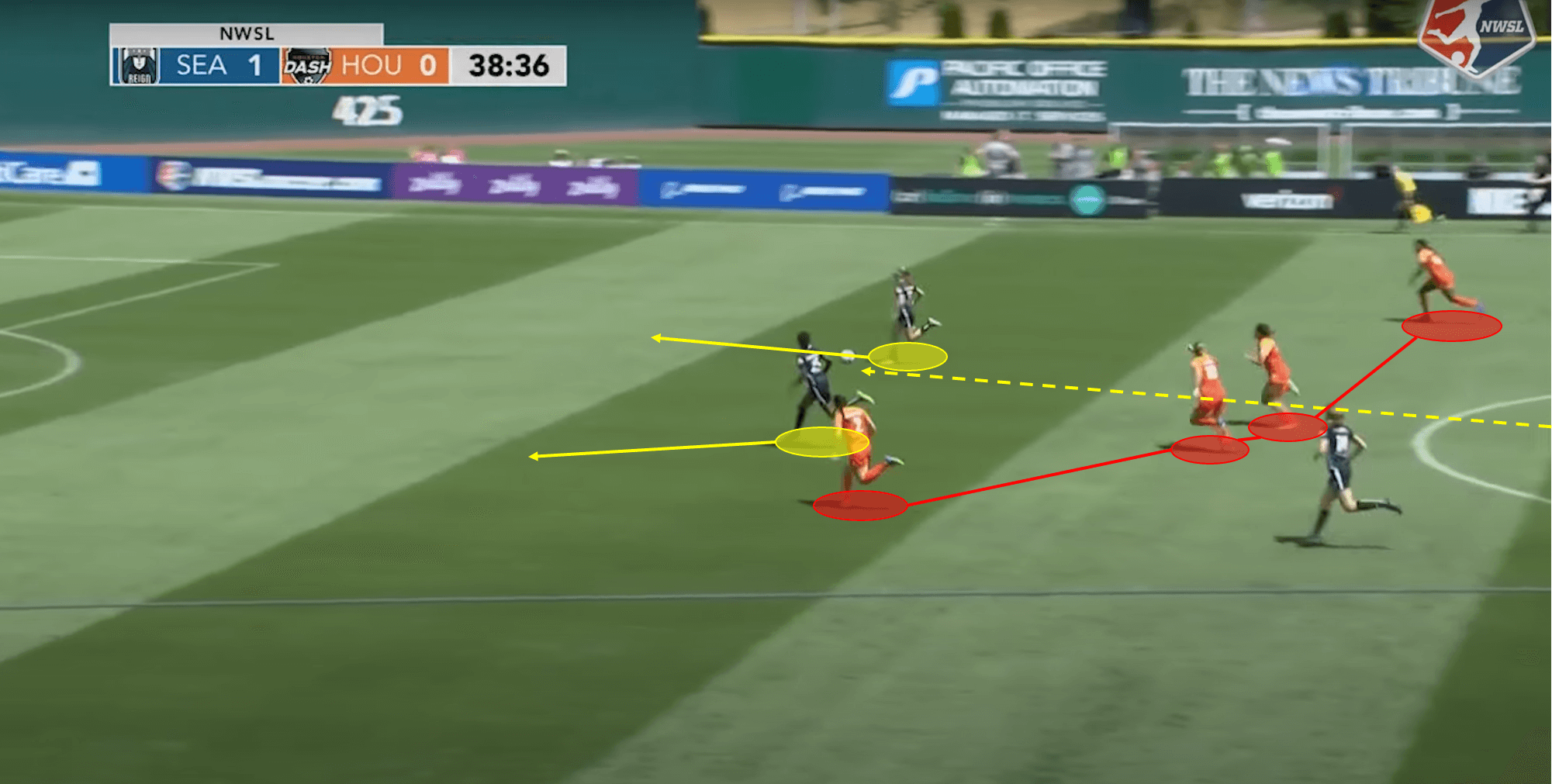 As we can see in the image above, Groom is able to receive the ball in stride with no nearby Dash players to impede her progress to goal. The eventual shot is blocked, but we can see that Fishlock was able to create the chance created through her spatial awareness, ability to move defenders and a well-placed pass.

Recoveries in the attacking third

A lesser covered aspect of Fishlock’s play is her productivity when out of possession. In the five-match span of focus, Fishlock led the team in recoveries by far with 14 in the final third of the pitch. These recoveries not only helped Reign to regain possession but led to shots 50% of the time. This drove to a team-leading 0.97 xG from her recoveries with 2 goals created.

Being fully aware that hunting the ball for 90 minutes is not ideal, Fishlock executes these recoveries by carefully selecting when to pressure. Her key moments of recovery typically occur when she approaches the ball carrier from behind. In these moments she is able to surprise the opponent, use a low centre of gravity and force the opponent off the ball. From there Fishlock aggressively presses forward to create a chance on goal herself or release the ball to a teammate who can.

In Reign’s match against the Washington Spirit, we see an example of this late in the match. A Spirit midfielder is attempting to control an aerial ball in the central channel. As the ball is in the air, Fishlock is already in a full sprint, approaching the opponent from behind. 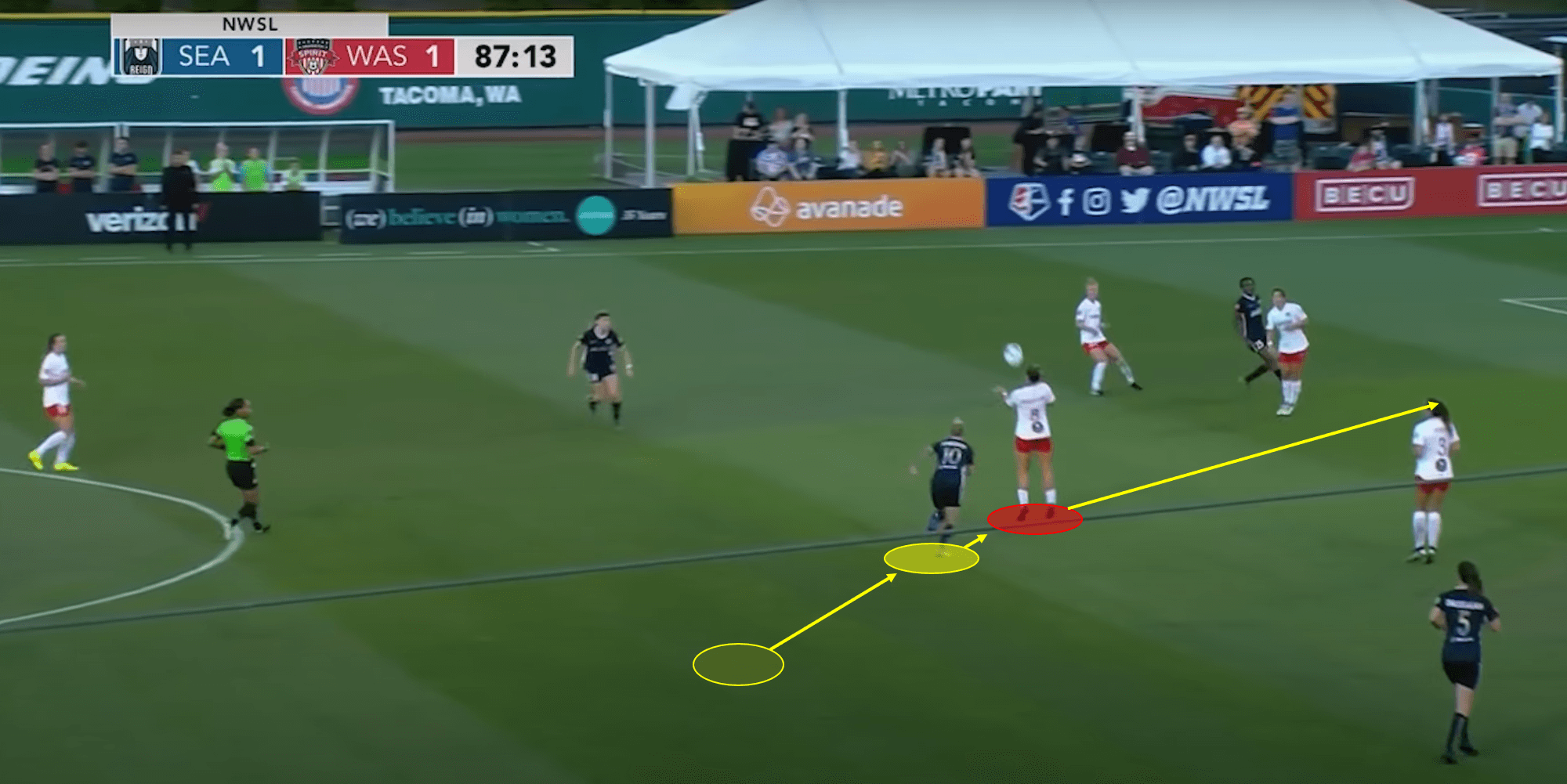 Because the Spirit player was just airborne and not aware of the incoming pressure from behind, she is easily unbalanced by Fishlock. From there Fishlock is able to poke away the ball and immediately press forward into dangerous attacking space.

Fishlock takes the ball to the edge of the Spirit box and releases a shot directly at the keeper. We can see in this moment that Fishlock also had the option to play the ball into the path of two different attacking players as well. 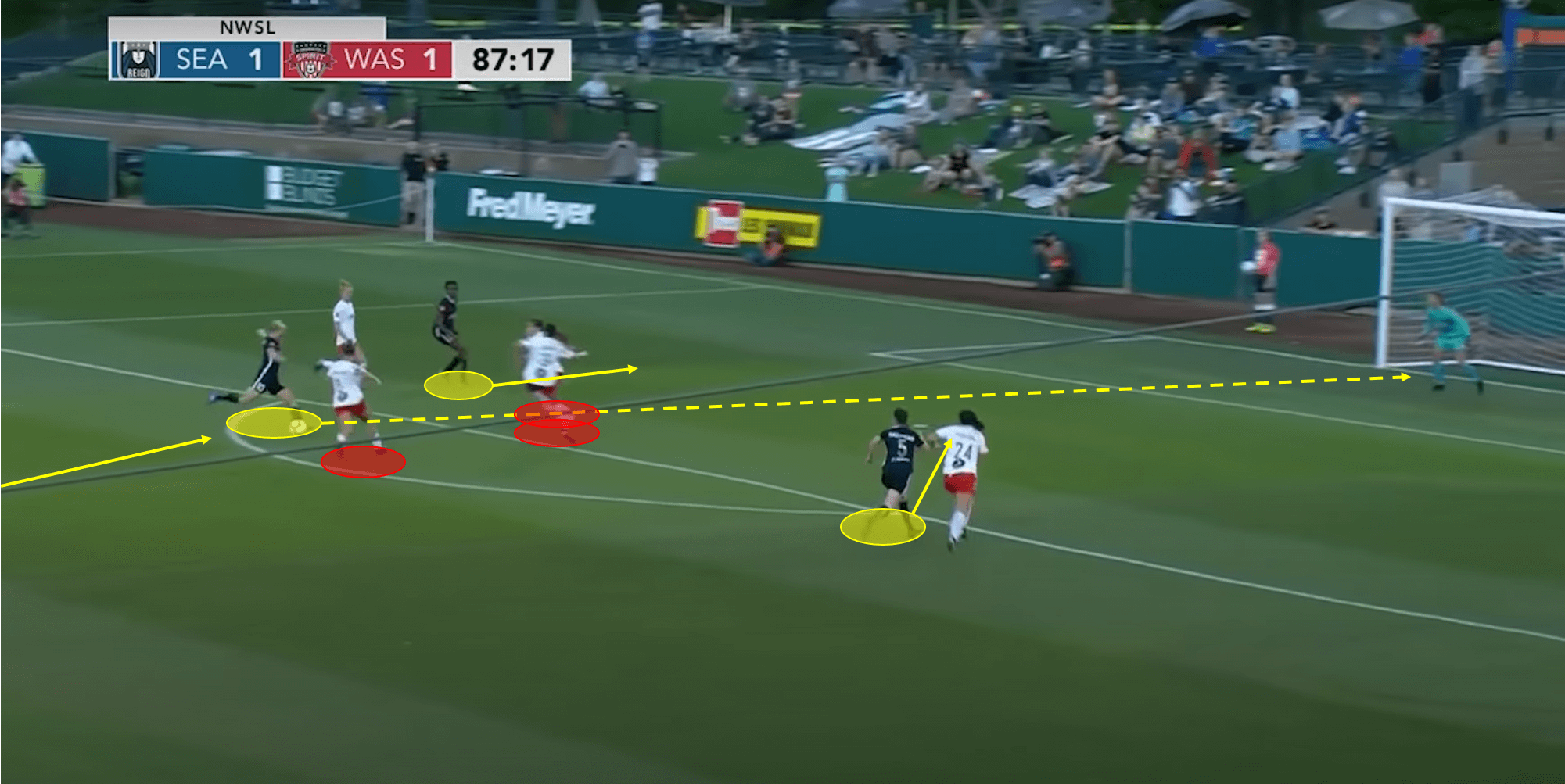 Earlier in the same match, Fishlock used a similar pressuring tactic on the flank. A Spirit player is receiving the ball in her defensive third with her back to the pitch. Fishlock recognizes a key opportunity and moves to pressure the Spirit player from behind as the ball is travelling to her.

Fishlock arrives and quickly lowers her hips to gain a lower centre of gravity. From that position she forces the Spirit player off the ball and pokes the ball away. 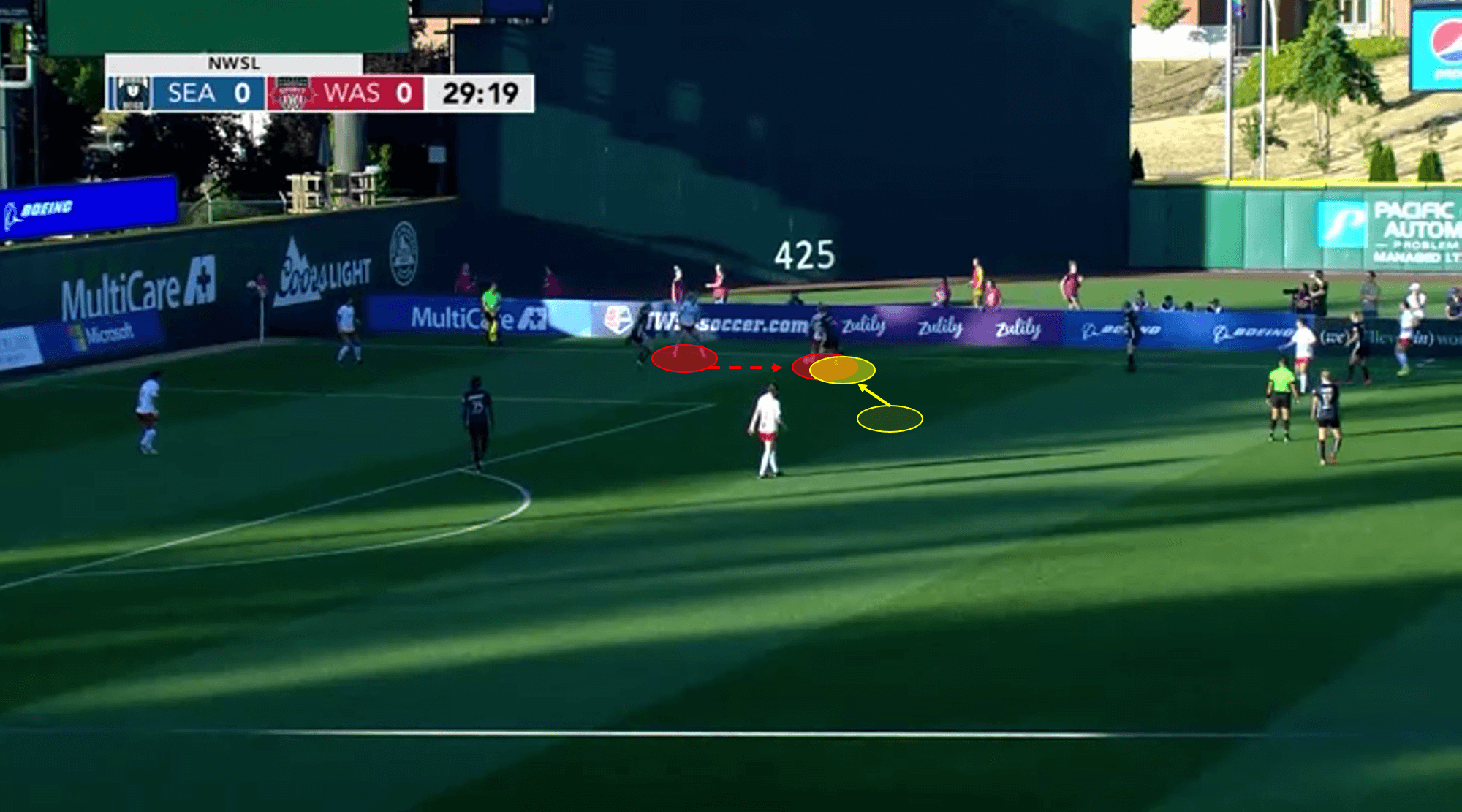 Fishlock takes a touch forward to gain control of the ball and directs her vision to the centre of the pitch. She sees that as she recovered the ball, attacking teammate Ifeoma Onumonu has altered her movement to approach the top of the box. Fishlock releases a low pass to the feet of Onumonu, but the pass is unable to reach its destination. 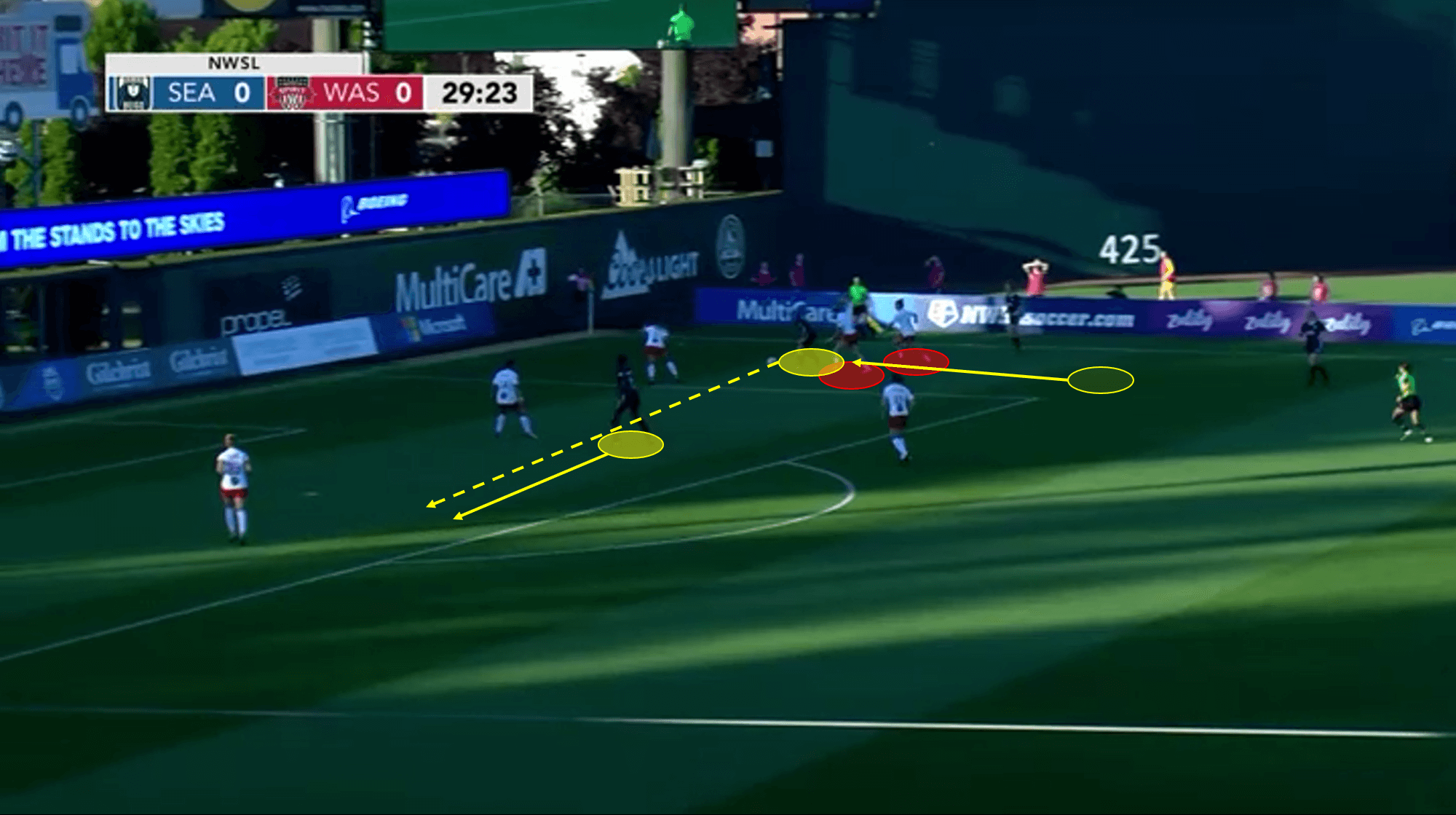 Fishlock’s ability to win the ball in the attacking third of the pitch gives her team a way to not only gain possession but immediately create chances on goal.

Shooting from outside the box

We must note that these statistics should be taken with a grain of salt. The tracking of statistics in the women’s game is woefully inadequate, with many past leagues and seasons barely registering any individual statistics at all. Despite this, we can infer that Fishlock will not hesitate to execute shots from outside of the box.

This has two main tactical implications for her team. A) If Fishlock is not pressured while she is in space outside the box, she will take a shot and through her technical ability create possible goals. B) If Fishlock is pressured to reduce the chance of her taking a shot, the pressuring opponent will open attacking space for Fishlock’s teammate.

This allows Fishlock to create goal-scoring situations by taking shots from outside the box or releasing the ball to a teammate who has found newly opened space in the box.

In Reign’s match against the Royals (shortly before Fishlock tore her ACL) we see Fishlock use this tactical scenario to her advantage. Fishlock has received the ball in a large amount of space in the left halfspace and is penetrating forward into the attacking third. The opposing centreback is faced with a dilemma, concede space to Fishlock, who can do damage from outside the box or take it away and attempt to halt the Reign attack while her defending teammates make recovery runs.

The Royals centre-back goes with the latter choice and closes down Fishlock. This pressuring movement opens up a large amount of attacking space for Reign attacker Balcer. Fishlock waits until the last possible moment and releases the ball to the feet of Balcer.

Fishlock, instead of remaining dormant and allowing Balcer to carry on the attack on her own, immediately penetrates forward into the box. Balcer realizes that all the nearby Utah players are focused on her and not Fishlock. Balcer releases the ball into the path of Fishlock who takes immediately releases a shot into the bottom right corner of the net.

This goal was created because of many variables, but Fishlock’s ability to take shots from far away set the foundation for the entire tactical movement. Any team that Fishlock plays for will be able to use her shooting threat as a tool to create space for nearby attackers.

Although Fishlock is approaching the twilight of her career, she appears to have no intention of slowing down. As we saw from her playing history, she is able to make an immediate and massive impact with any squad she takes the field with. She is bound to influence the attacking style of any FAWSL club that she may join. 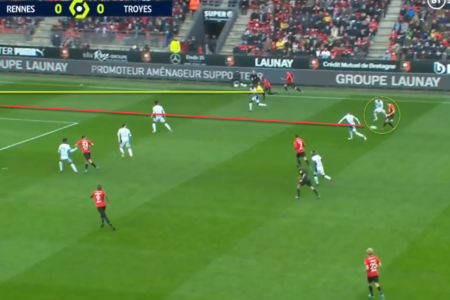 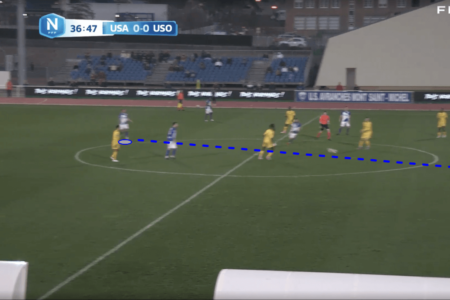