Javi Martínez has been a core part of Bayern Munich since joining the German powerhouse in the summer of 2012. While he was initially brought in as a defensive midfielder, Martínez’s appearances have been coming more consistently as a centre-back. In fact, he’s only played one full match as a defensive midfielder this season. Martínez has done well to help support and admittedly contribute to Bayern’s injuries across their back line. While Martínez has featured in less than half their matches, his abilities both defensively and on the ball make him a great option for Hansi Flick, Bayern’s manager.

This tactical analysis scout report provides an analysis of how Javi Martínez fits into Flick’s tactics at Bayern Munich. At 31 years of age, Martínez has contributed to Bayern’s four-point lead over their rivals, Borussia Dortmund, at the top of the Bundesliga table.

Javi Martínez isn’t necessarily the fastest player on the pitch, which will be highlighted later, but his ability to anticipate attacking movements allows him to remain effective as a centre-back. While this may come through instinct or, after a review of match footage, his ability to properly predict what will occur allows him to gain an advantage on opponents. The first example comes against Borussia Dortmund. 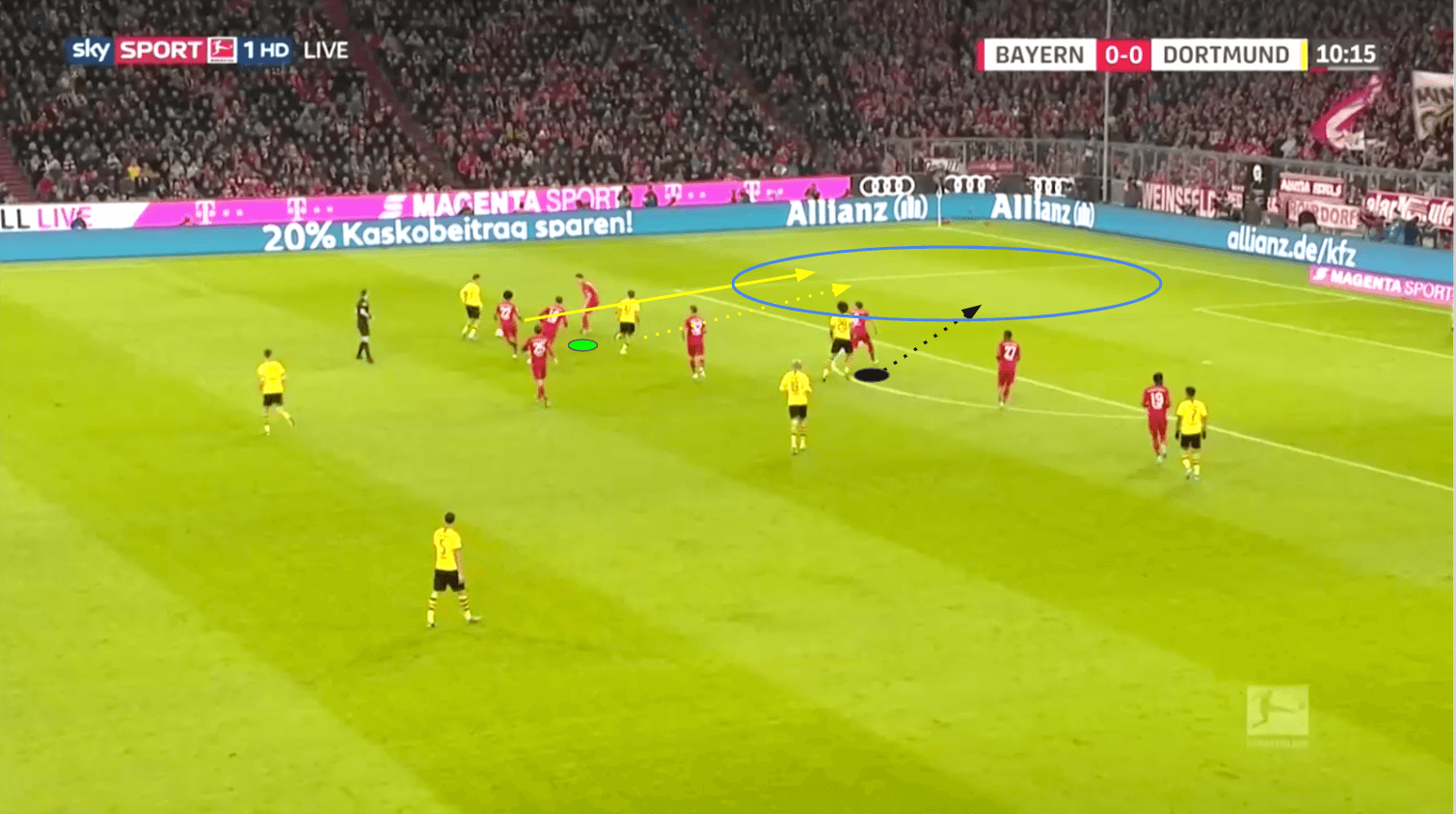 As Benjamin Pavard, marked in green, stepped up to defend the pass, Martínez, marked in black, recognised the space that Pavard left open. As soon as Pavard left, Martínez took his first step in that direction. Simultaneously, Mario Götze, Dortmund’s attacker, ran towards that space. Because he anticipated this movement, Martínez was able to effectively prevent Götze from crossing the ball, defending him well to force a corner. Instead of having to react, his proactive thinking allowed him to prevent a potential cross.

Martínez’s anticipation later allowed him to slow down Julian Brandt when the Borussia Dortmund midfielder was attempting to counterattack. As Brandt dribbled down the centre of the pitch, Martínez stepped up to slow him down. When Martínez was close enough to Brandt, Brandt got the ball off of his foot. What happened next is the anticipation that makes Martínez so successful. 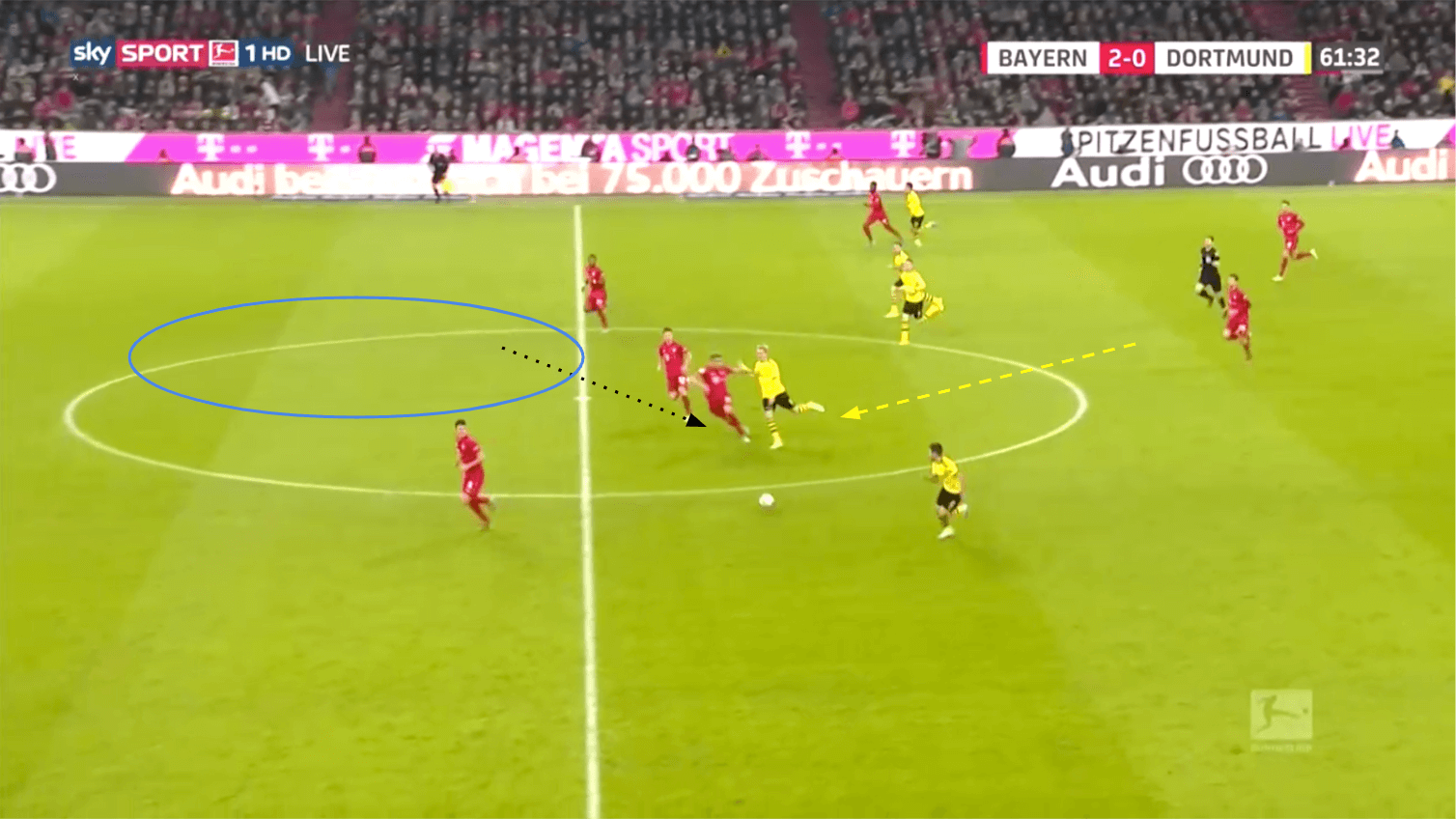 Martínez met Brandt in the centre of the pitch. As the ball left Brandt’s foot, Martínez made sure to make contact with Brandt, extending his arm out and slowing Brandt’s progress forward. While not technically legal, this prevented Brandt from entering the space directly behind Martínez. Raphaël Guerreiro, who had just received the ball, could have played Brandt through with his first touch; however, Brandt slowed his run, staying in front of the Bayern defensive line. Seconds later, Guerreiro, who now had fewer attacking options, played an errant pass, and Bayern were back in possession.

Martínez’s anticipation in defence can allow his team to transition quickly to attack, providing them with the opportunity to catch their opponent off-guard. Below is an image of Martínez making a tackle. Bayern were in the midst of building out of the back when they were dispossessed, and Dortmund looked to counter quickly. 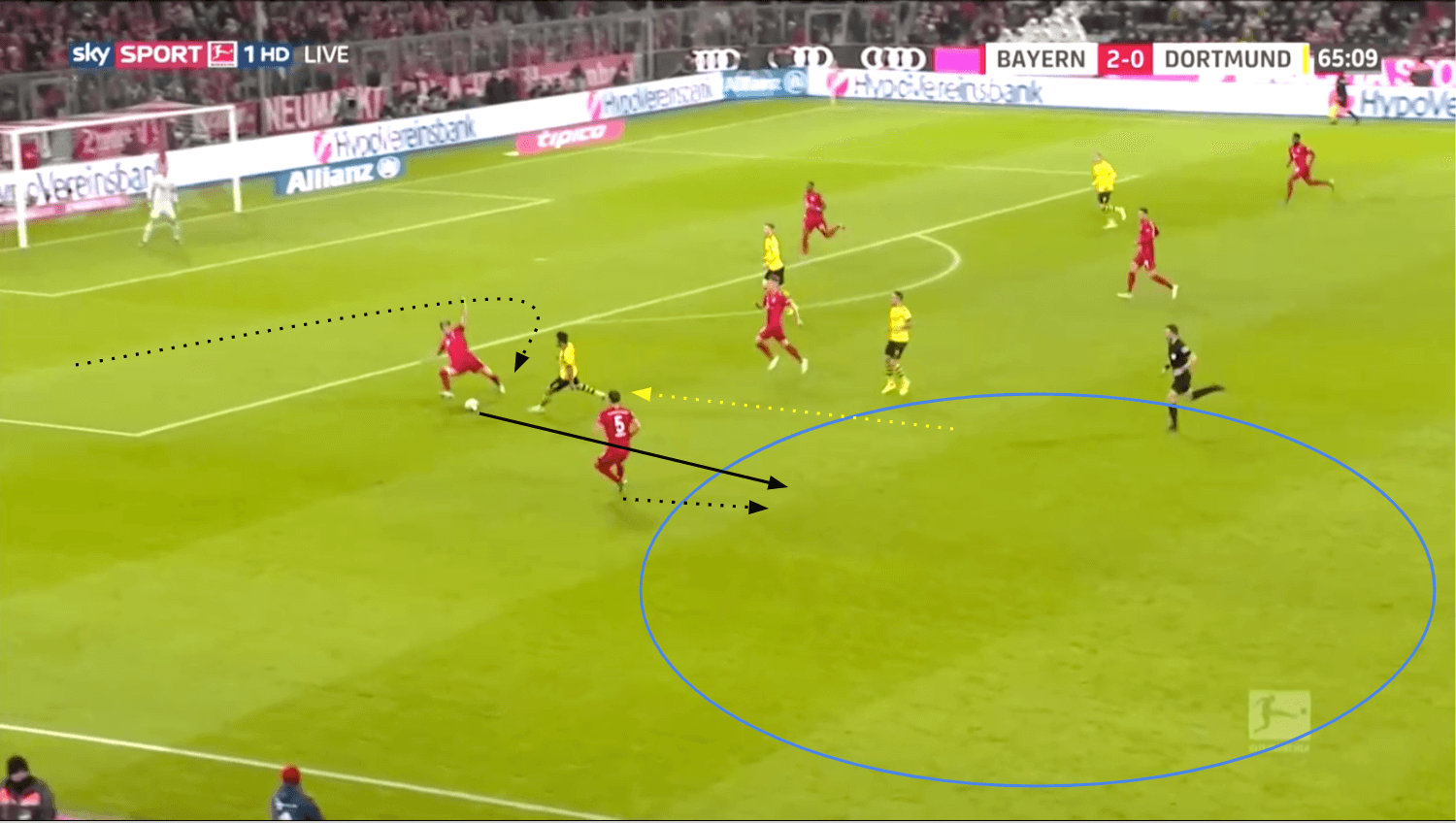 The ball was played into the path of Guerreiro, who found himself in a duel with Martínez. As Martínez arrived to tackle Guerreiro, he lunged at the ball. Martínez likely recognised the space behind Guerreiro before arriving for the tackle. His first and only touch put the ball right into the path of Pavard, who used his first touch to play a vertical ball to Thomas Müller. Within seconds, Bayern went from defending a potential scoring opportunity to creating their own, all because of Martínez’s ability to anticipate his opponent’s movements.

While Martínez has featured primarily as a centre-back for Bayern this season, he has certainly brought his skills and experience from spending much of his career as a defensive midfielder with him. Because of this, Martínez is able to make more challenging passes than most central defenders. 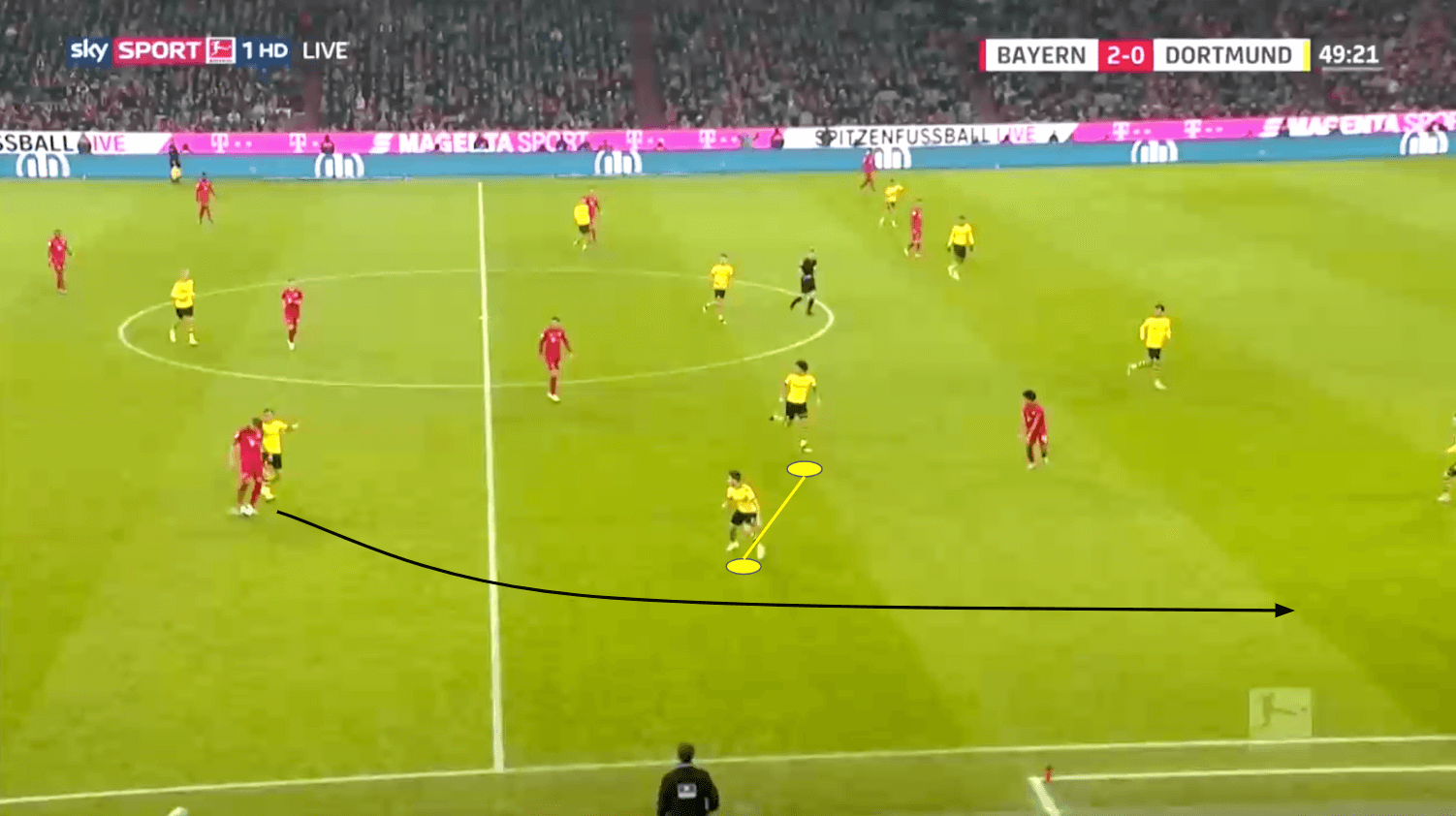 Here, Dortmund’s midfield had done well to organise themselves, particularly Axel Witsel and Raphaël Guerreiro, who were preventing Martínez from passing the ball to Serge Gnabry, who was the Bayern player gesturing for a pass. Guerreiro also believed that he had eliminated Martínez’s pass out wide with his body shape, as it appears that he will intercept anything sent that way. However, Martínez both lofts and bends the ball around Guerreiro, eliminating him from the play and finding his open teammate. This pass is not typical of most central defenders. When Martínez lines up next to David Alaba, Bayern effectively have two players who can ping passes all over the pitch, allowing for their build-up and attack to be much more balanced.

Similarly, Martínez is more comfortable on the ball than most centre-backs due to spending just over half of his career as a defensive midfielder. He has built up the courage and ability to play more dangerous passes that most centre-backs would not attempt. In the image below, Dortmund have created a numerical advantage, outnumbering Bayern around the ball. 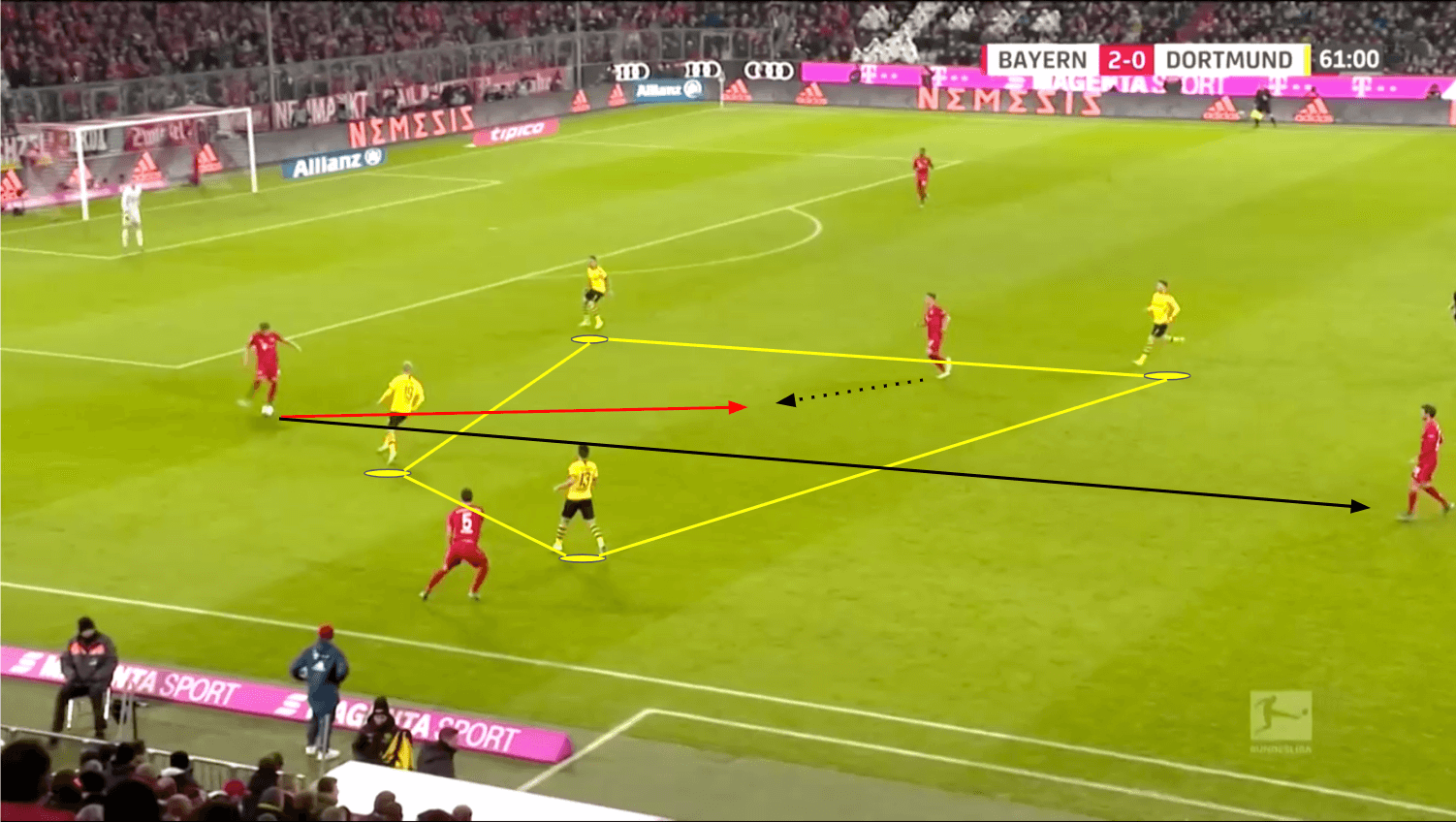 As Martínez received the ball from his right-back, Pavard, he had two options. If Martínez chose to play the obvious pass (highlighted in red) to Joshua Kimmich, Dortmund would have had the opportunity to collapse on the player and win the ball in a dangerous area. Instead, his first touch rifled a pass directly past a poorly-shaped Brandt to Thomas Müller, who was able to turn up the field and distribute the ball, leading to a Bayern cross. Martínez’s pass successfully eliminated four Dortmund players from the play, meaning that Dortmund were in trouble defensively. This ability to pass comes from Martínez’s time spent as a defensive midfielder – the same experience which taught him to attract opponents in order to deliver more effective passes to teammates.

One of the reasons that Martínez pairs so well with David Alaba at the centre-back position is because of his willingness to attempt to attract pressure during Bayern’s build-up. Martínez is more than comfortable dribbling forward in an attempt to draw defenders towards him.

When Bayern were looking to progress forward against Dortmund, Martínez received a pass from Alaba and his first touch sent him forward, towards the Dortmund defence. 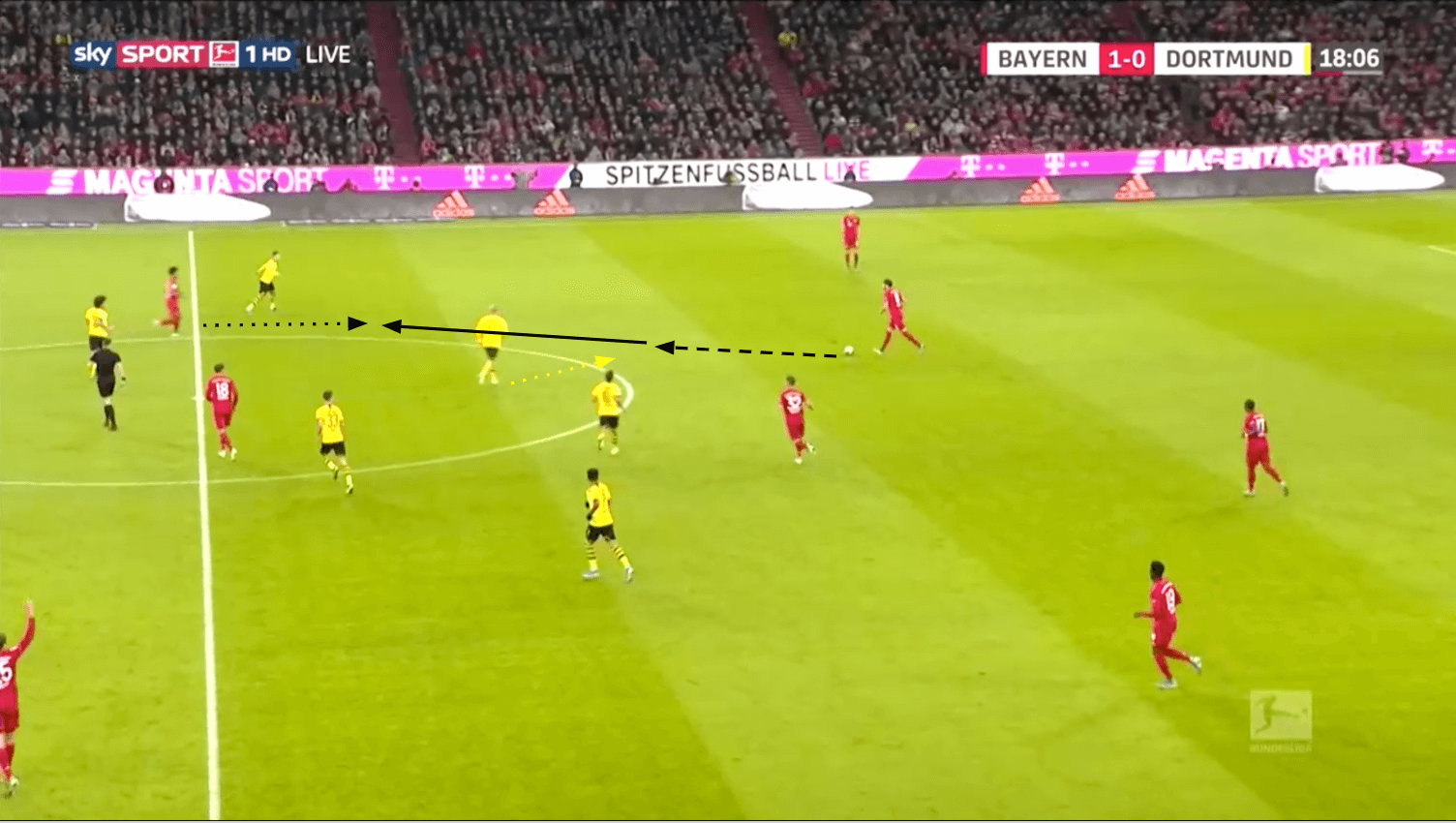 Martínez continued to dribble forward. As he did, Julian Brandt changed his movement – instead of moving laterally, Brandt took steps toward Martínez. While a small change, this created more space for Serge Gnabry to receive a pass. Martínez waited until Brandt was as close as possible before releasing his pass to Gnabry, who was now able to receive the ball in space. While Gnabry had pressure on his back, causing him to play Pavard out wide, he didn’t have to worry about losing the ball from pressure in front of him.

Martínez also does this higher up the pitch when Bayern has opponents set up in their defensive block. In this instance, he was attempting to get one of the two highlighted defenders to step forward and pressure him. 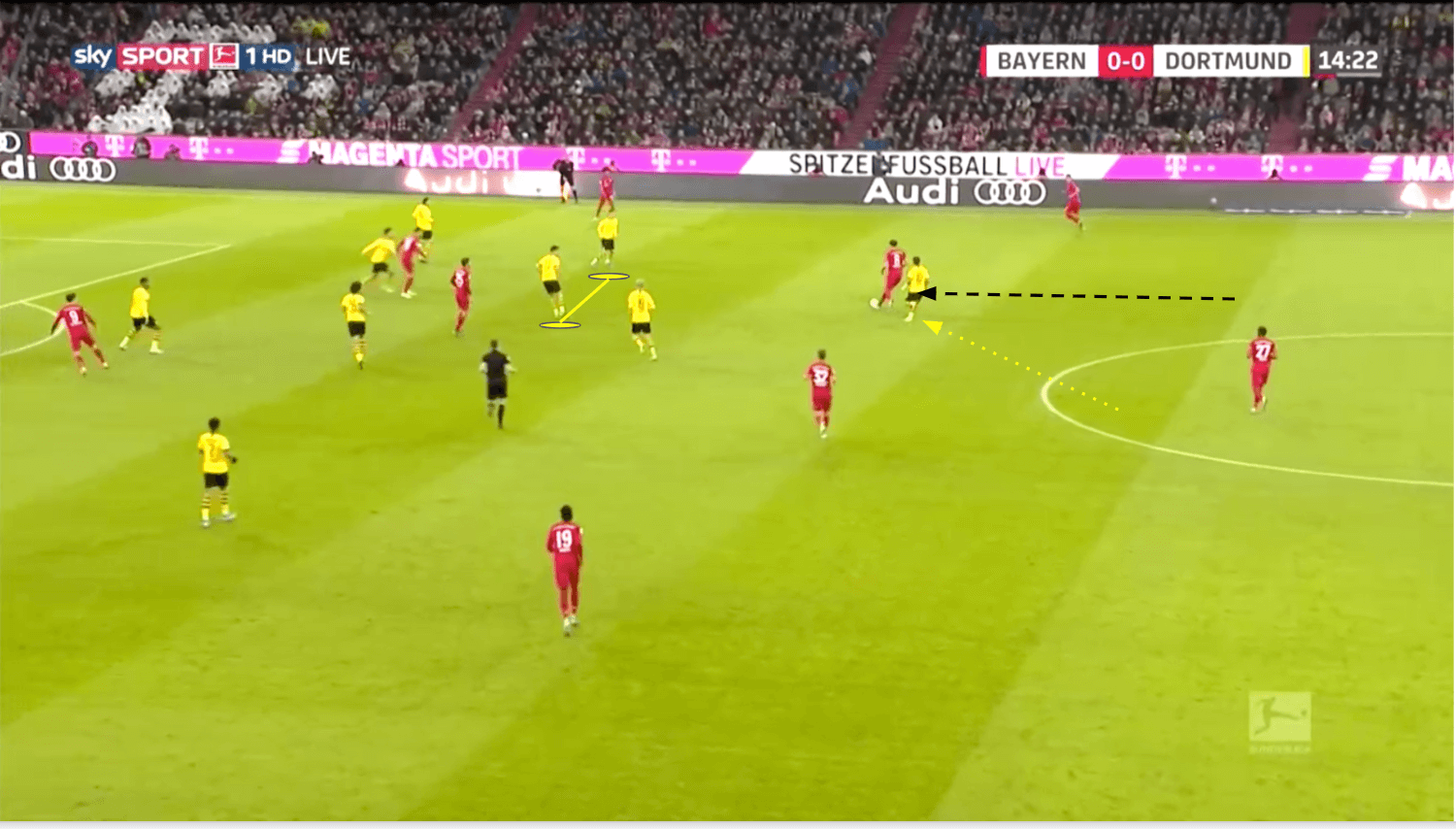 The reason he wants to draw that pressure is because the two defenders are currently eliminating the Bayern players behind them as passing options with their cover shadow. This defensive positioning that they’ve taken up is effective, but if Bayern can get someone like Martínez to get them to move, the Bavarians have some of their most dangerous players in one of the most dangerous spaces on the pitch, the half-space. In this instance, none of the Dortmund players actually step forward because they don’t view him as a dribbling threat, bringing to light one of Martínez’s deficiencies: his lack of pace.

Twice against Borussia Dortmund, Bayern Munich were put under pressure because Martínez was unable to properly challenge either an opponent or an opponent’s pass. This lack of pace, similar to Jérôme Boateng, is one of the main reasons why Martínez may need to look elsewhere for playing time in the future. The first instance occurred when Dortmund were counterattacking down the right flank. 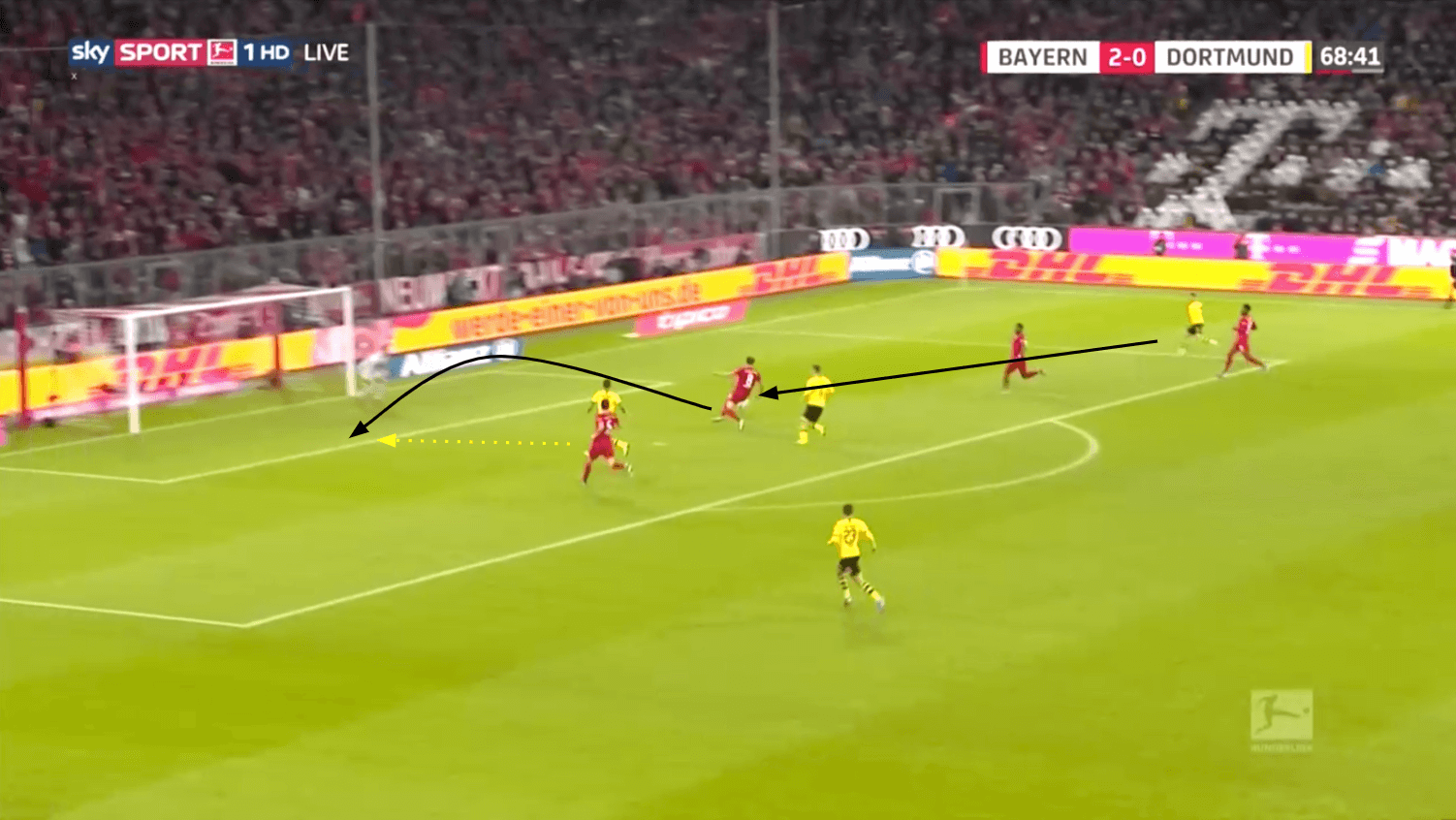 Achraf Hakimi progressed the ball forward with pace. The Bayern defence dropped accordingly, with Martínez keeping pace with Alaba. As Hakimi crossed the ball, Martínez dove with his right foot out to prevent the cross from getting through. Ideally, Martínez would have been a step or two quicker, allowing for him to get his left foot in the way, deflecting the ball back from where it came. Instead, his right foot deflected the ball into the air, directly into the path of Paco Alcácer, who was unable to finish the chance despite being in on goal. While Bayern were able to escape unscathed, Martínez’s inability to get into the correct space is not encouraging for Hansi Flick.

Similarly, Martínez failed to close down Julian Brandt, although this time his lack of pace became more apparent over a much smaller distance. As Brandt received the pass from the wing, Martínez, highlighted in black, failed to close him down. 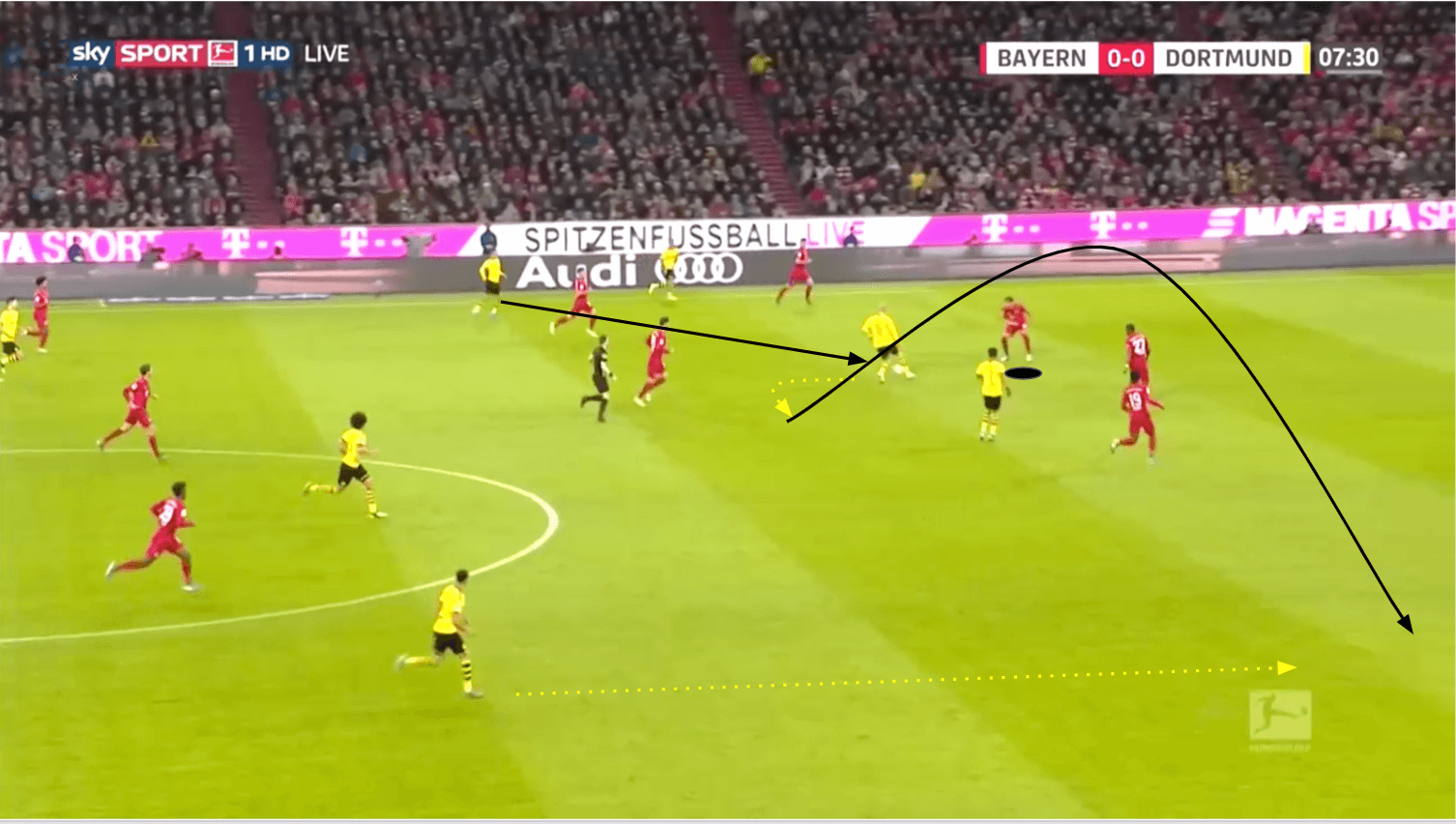 Upon first glance, it appears that Martínez is holding the same distance as his teammates, which seems like a good idea. The problem is that David Alaba and Alphonso Davies are much quicker than Martínez, and they can leave more room to their opponents and still close them down in time. Martínez doesn’t have that luxury. In this instance, Brandt is allowed to turn and then play the ball towards Hakimi, who had a lot of space to run into on the right wing. While Brandt should have done better to take on Martínez, the fact remains the same: Martínez’s lack of acceleration will continue to cause problems for Bayern.

Martínez has clearly demonstrated his value to Bayern Munich, filling in for them in multiple roles, albeit primarily as a central defender this season. With his contract expiring at the end of June 2021, and with Bayern’s recent purchase of Lucas Hernández and the emergence of Niklas Süle, it’s possible that Martínez will need to ply his trade at a different club. While he may be on the move in the summer, Martínez’s cool, calm demeanour while defending would be a welcomed addition to most clubs around the world.