Bayern Munich welcomed FC Augsburg to the Allianz Arena as Bayern celebrated their 120th anniversary as a club. While Augsburg fought hard to spoil the party, they ultimately fell to the Bavarian Champions by a scoreline of 2-0. Hansi Flick’s tactics, which he adjusted at half time, led Bayern to their sixth win in a row.

This tactical analysis looks to understand the tactics used by both Hansi Flick and Martin Schmidt in their Bundesliga match. While Augsburg’s defence initially frustrated Bayern, Flick’s analysis of his team’s first half and his adjustment in tactics made the difference on the day. 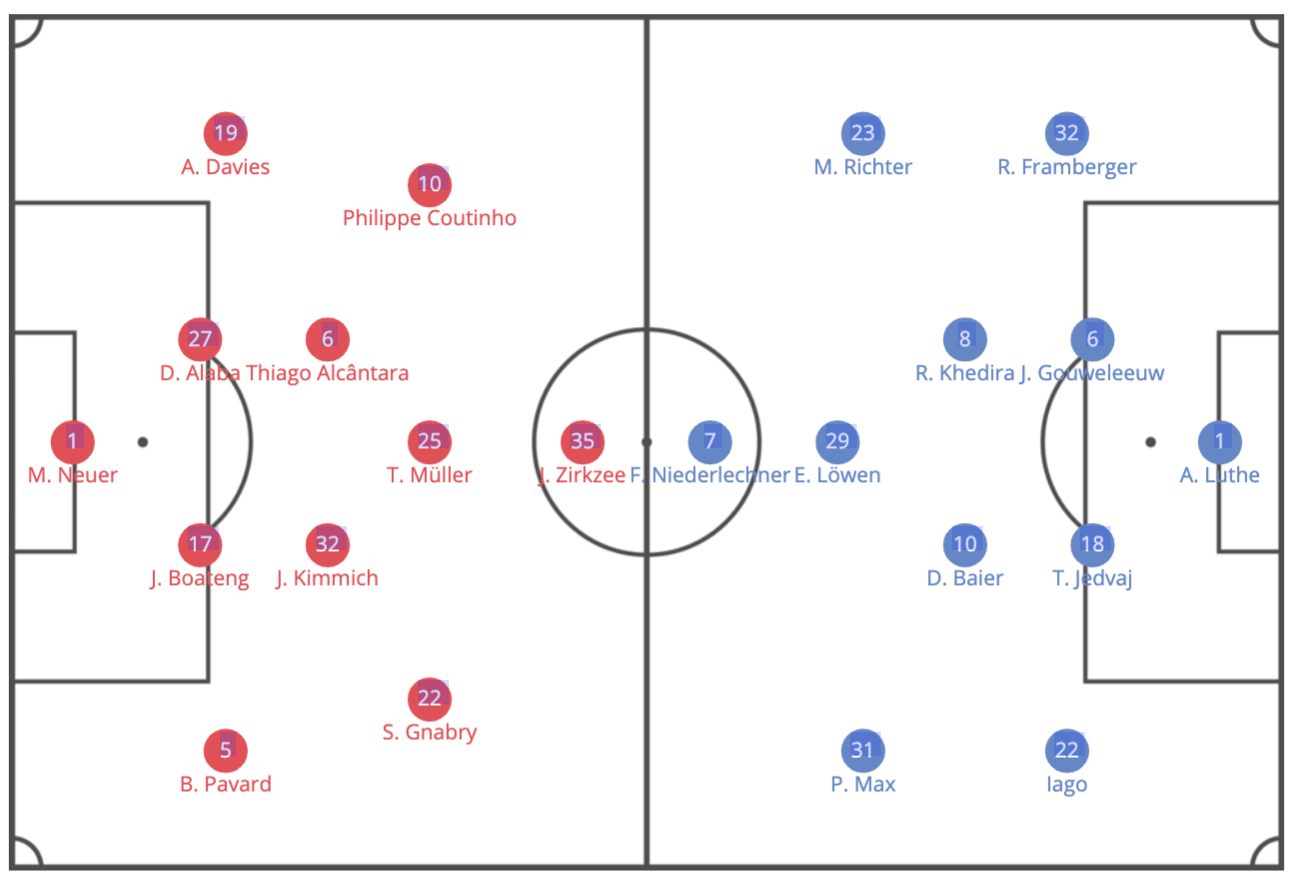 Bayern Munich came out in their 4-2-3-1, which is what they’ve used the majority of the time under Hansi Flick. Their back four remained the same, with Alaba and Boateng pairing as centre backs with Davies on the left and Pavard on the right. The midfield remained unchanged from their last Bundesliga match. Müller was again trusted in the centre of the park, and Joshua Zirkzee started as the striker, as Robert Lewandowski is still out injured.

Augsburg, who spent most of the match defending in a 4-4-2, technically came out in a 4-4-1-1. Their centre back pairing of Jedvaj and Gouweleeuw were tasked with maintaining the organization of both the backline and the midfield line of four. The midfield, consisting of Max, Baier, Khedira, and Richter, worked cohesively to frustrate Bayern’s attack.

Augsburg came to the Allianz Arena looking to frustrate Bayern and hit them on the counter. Their defensive set up, which was a 4-4-2, helped them achieve their first part of their goal.

Bayern struggled to create chances in the first half. In fact, they didn’t create any until the end of the 45th minute, seconds before halftime. While this did account for their .2 xG, it was otherwise a fruitless half for the Bavarians, as they struggled to break down Augsburg’s defence. The adjustments that Hansi Flick made will be addressed later; for now, the focus is on how Augsburg kept one of the most potent teams in Europe at bay for an entire half. More specifically, how they used a compact, relatively simple structure to do so. 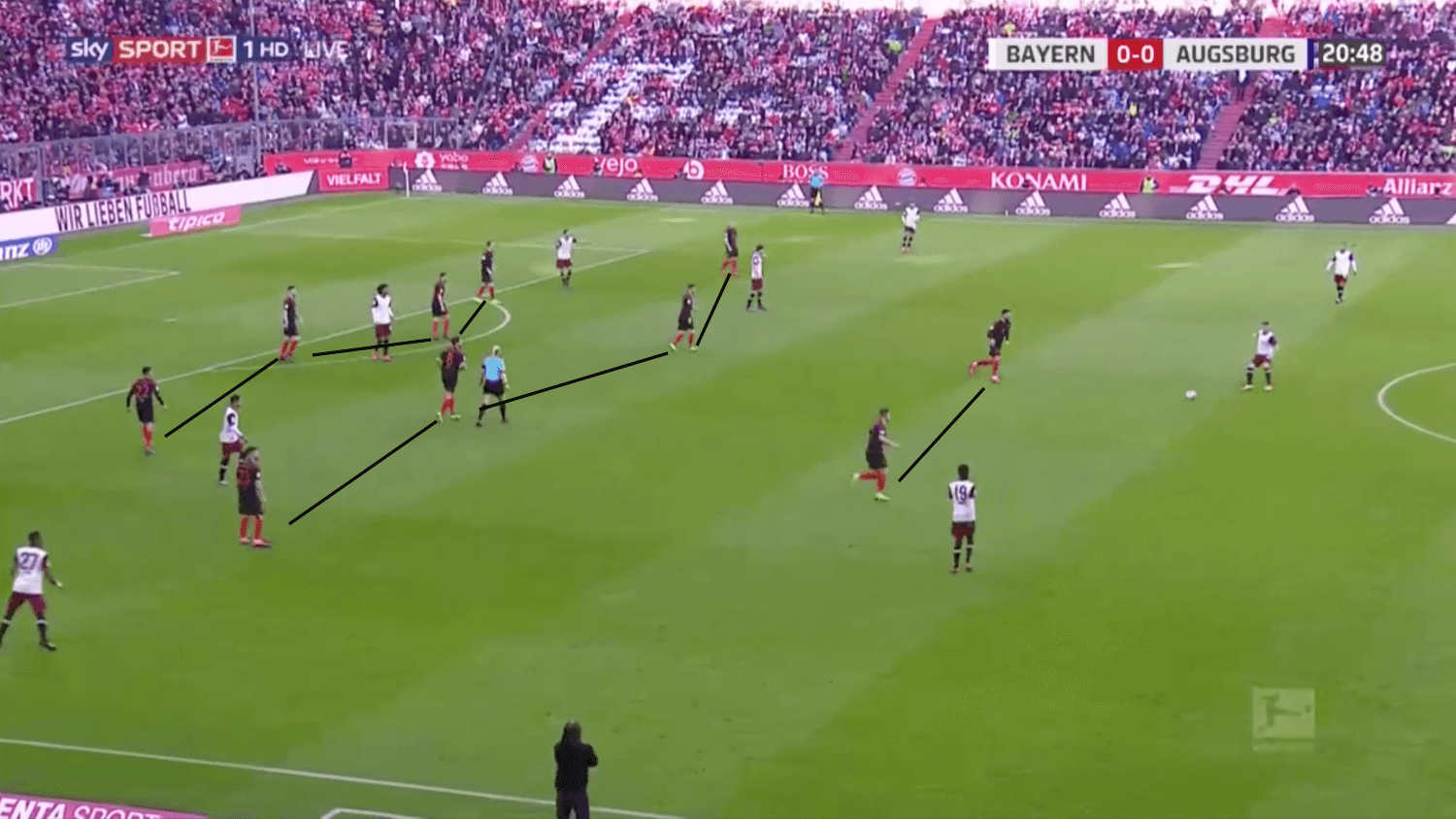 Augsburg, who allowed Bayern to have 72% of the possession in the match, set up in this 4-4-2 formation when they didn’t have the ball. They rarely pressed the ball when Bayern were in their own half, instead opting to drop and find their shape. While they didn’t always drop this low (they also opted for a mid-block), their compactness is what made them successful. In this image, Augsburg have successfully marked all of Bayern’s attacking players in the centre of the pitch, essentially forcing the Bavarians out wide. This led to a slew of crosses from both Davies and Pavard, which were easily warded off by the Augsburg defenders. 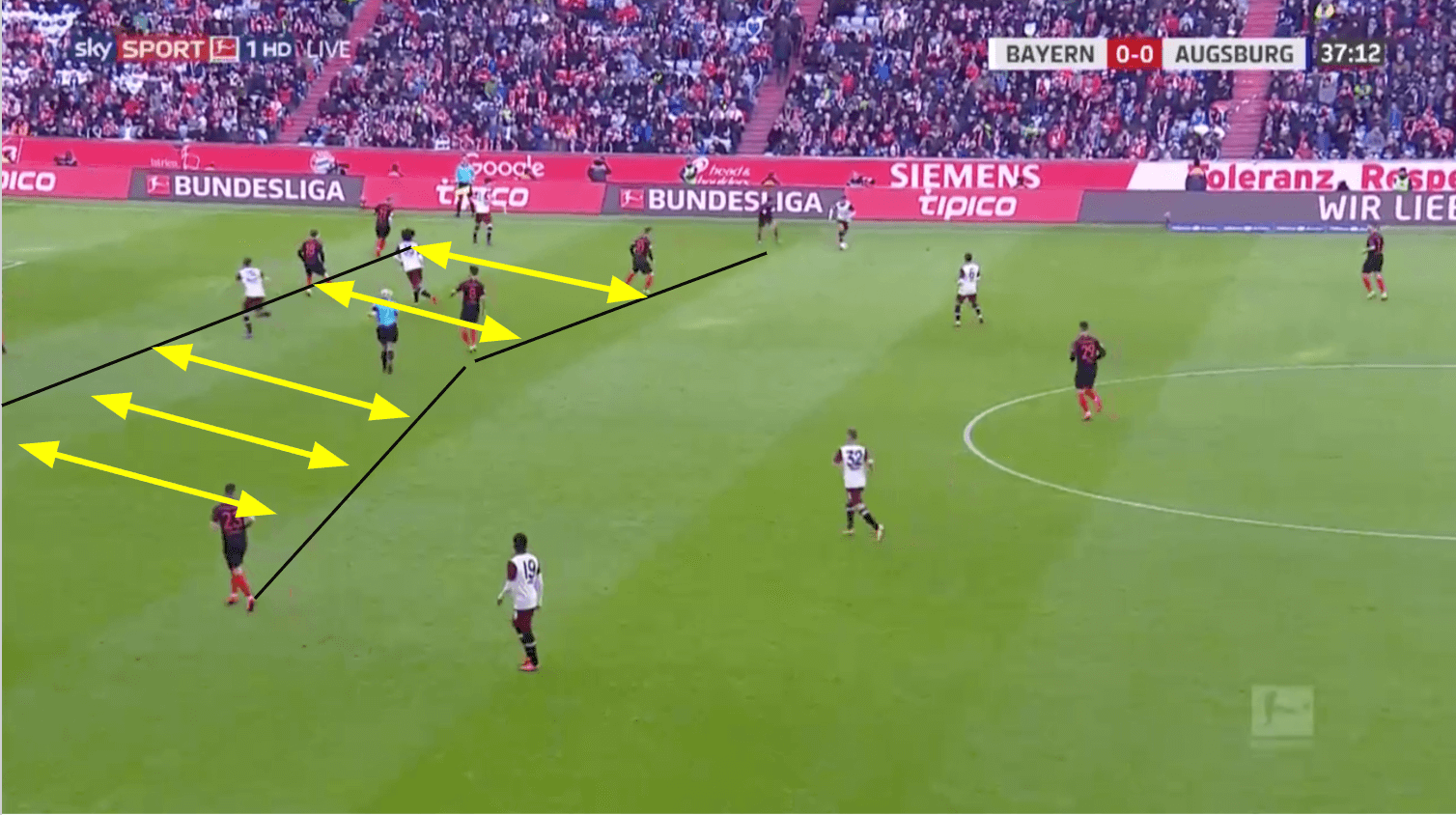 Even when Bayern tried to pull Augsburg out of their deep block, they were able to maintain their compact shape, eliminating space in between the lines of defence. This meant that there was no way for Bayern to play through the middle of the pitch, because there was no room for players like Müller, Gnabry, and Coutinho to receive the ball in front of the back four defenders. This meant that if Bayern wanted to score, they’d have to find space on the wings to exploit.

Bayern struggles with wing play in first half

Unfortunately for Bayern, their play on the outside of the pitch also suffered in the first half, which was another contributing factor to their low xG output in the half. Their attack down the left flank seemed to struggle, often due to positioning issue and angles of support. The first example is early on in the match, with Alphonso Davies dribbling towards the penalty area. 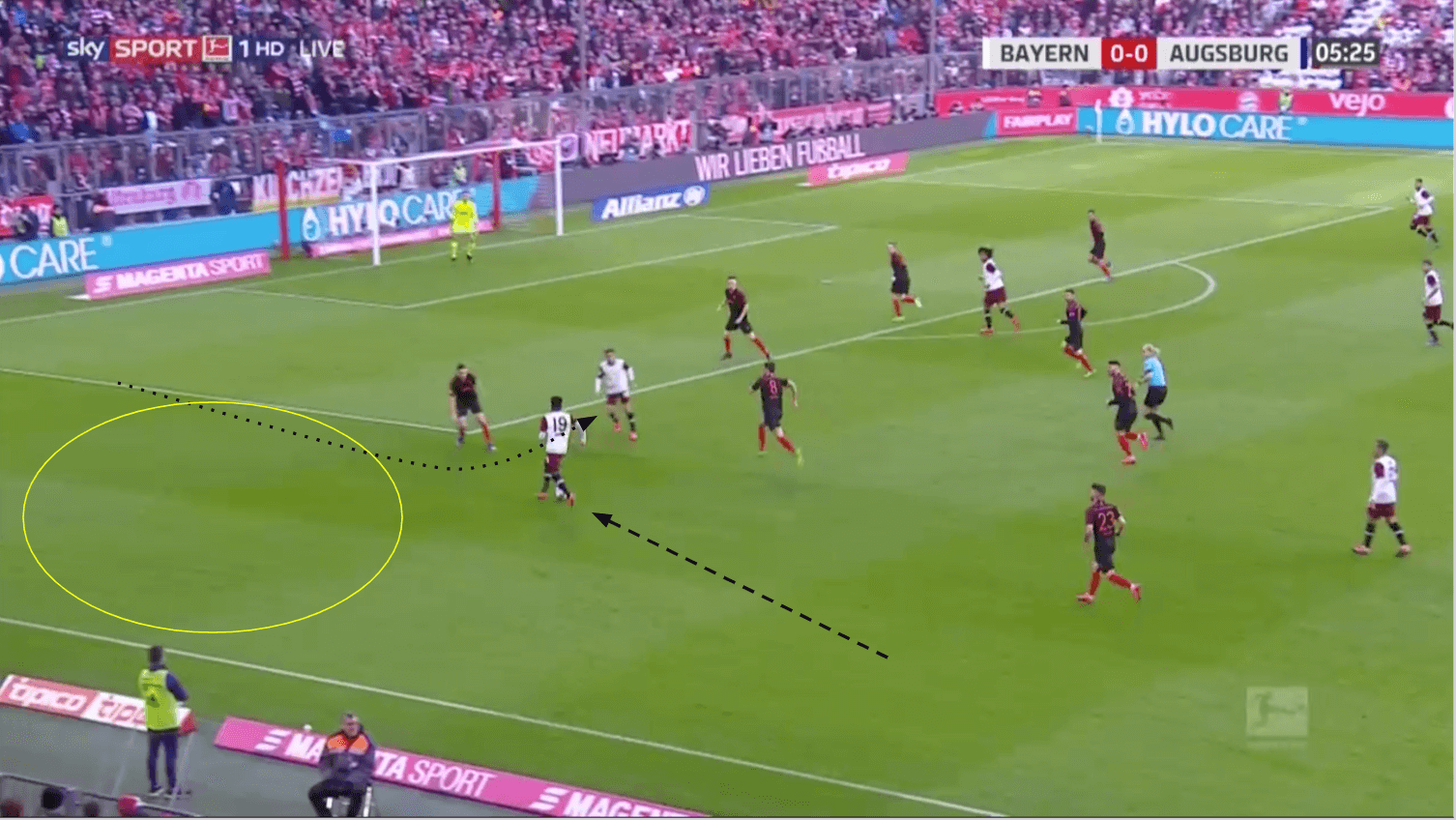 As Davies attacked, Philippe Coutinho, coming from an offside position, checked into the space that Davies was attacking. This caused a problem for Davies because Coutinho had taken up space which Davies could have used to dribble through. This is also a problem for Bayern because the defender can now mark two men at the same time due to their proximity. The preferred option here would be for Coutinho to go out wide to the left of Davies. This would result in the defender either having to shift, creating more space, or would allow Davies to play a nice diagonal ball that Coutinho could run on to and potentially put across the face of goal. Instead, Davies laid the ball off to Coutinho, who quickly lost possession.

The next example of poor positioning also includes Davies, who wasn’t able to support his teammate properly. 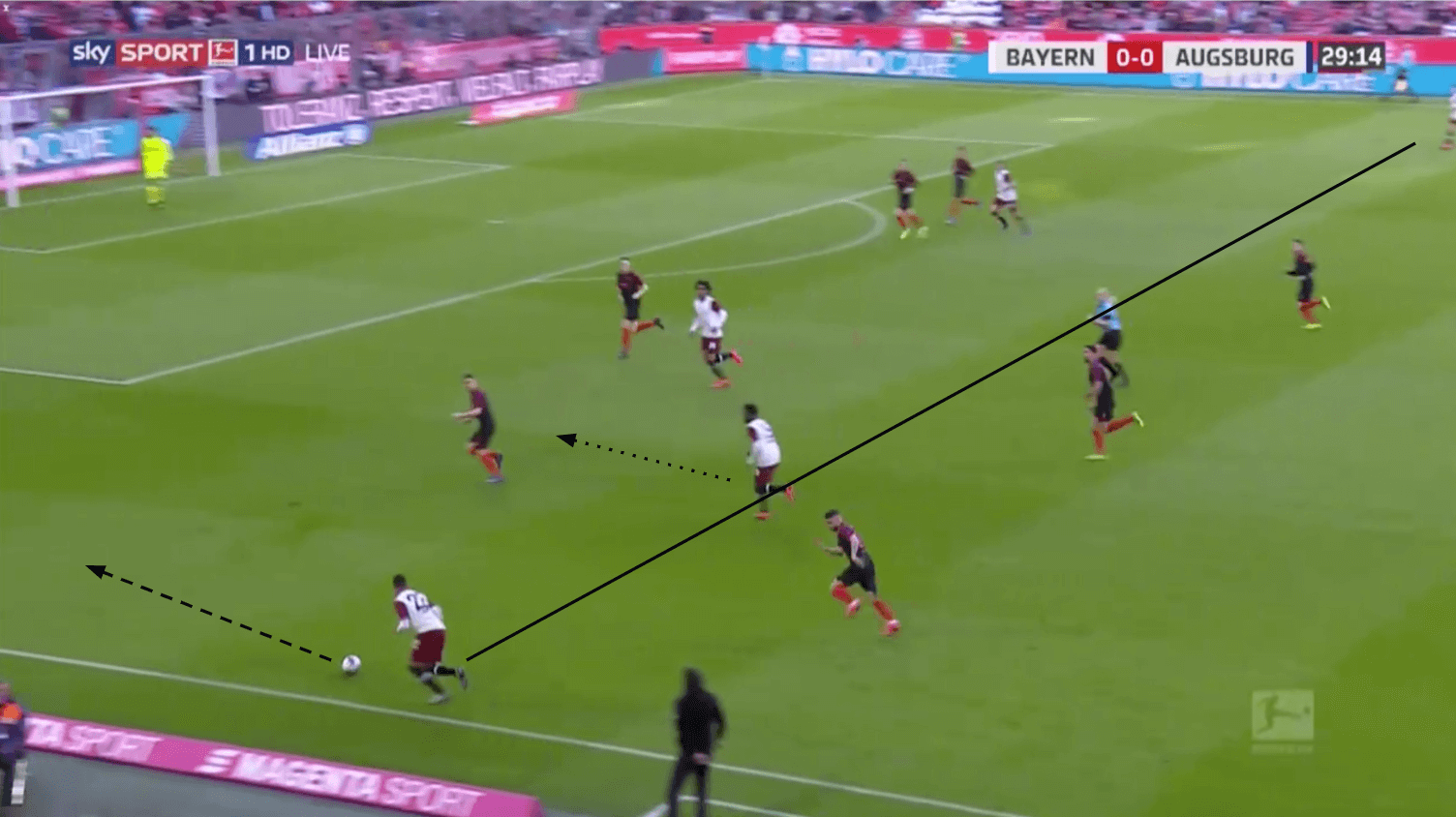 Here, Serge Gnabry received the ball from David Alaba. This image was taken at the moment he received the pass facing forward. While there were teammates close to him, Gnabry essentially had no options to play a pass to. In this instance, Davies was on the exact same horizontal line as Gnabry. As Gnabry drove forward with the ball at his feet, Davies moved the exact same direction at the exact same speed. The pass that would be required for Davies, who is technically in an advantageous position, to receive the ball is almost impossible to execute at speed, meaning that Davies eliminated himself as a potential passing option.

One of the ways in which Bayern tried to solve their lack of attacking opportunities is through the play of David Alaba, who at times seemed visibly frustrated with his teammates, particularly Davies and Coutinho on the left side of the pitch. Alaba took opportunities for himself to try and impose his will on the game. 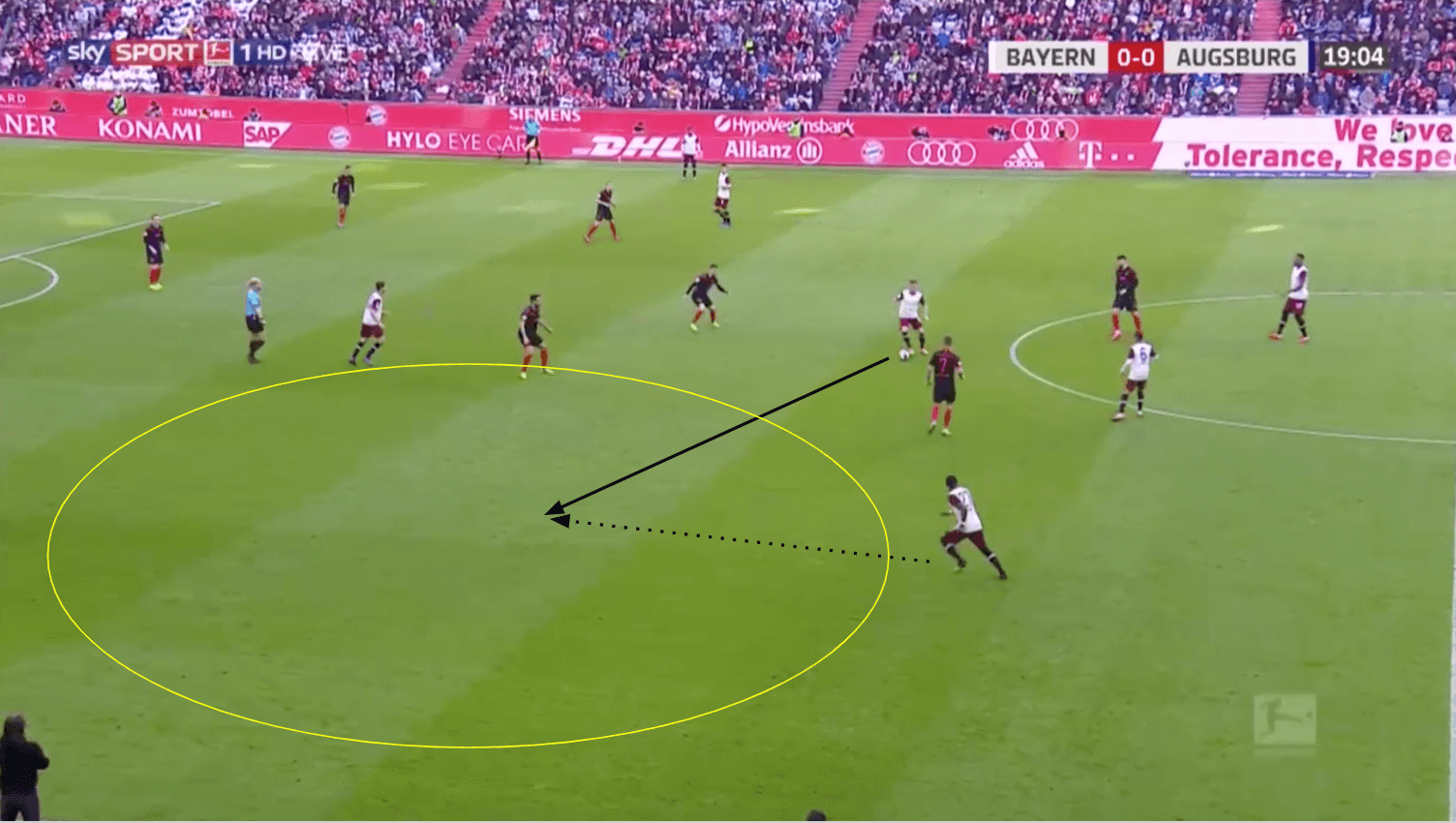 One example of this is seen above, with Alaba receiving a pass from Kimmich in a large amount of space.. The centre back, in an attempt to speed up play and cause Augsburg problems, quickly played the ball to Coutinho, who attempted to lay it off for Davies but delivered a poor pass. While this particular move didn’t work, Alaba looked to create a numerical advantage in order to better support his teammates, which is a brave, inspiring move from a central defender.

Alaba also contributed in attack by attempting to catch Augsburg by surprise. He did this through his long passes in to teammates before Augsburg had a chance to set up defensively. 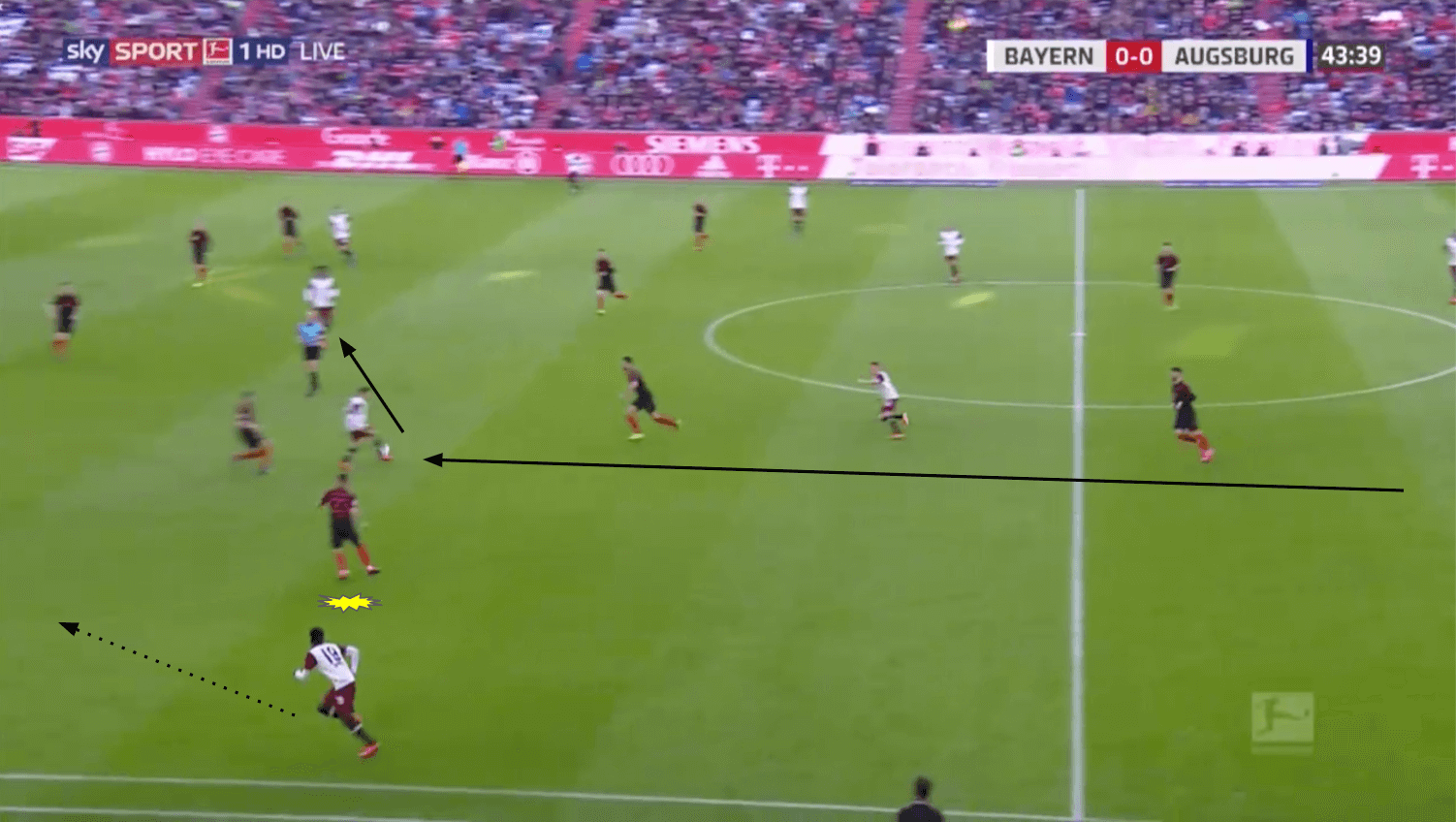 In this image, the long pass came in to Coutinho from Alaba. Coutinho has a man open in the centre of the pitch in Zirkzee. Davies, the man at the bottom of the image, read the situation perfectly: as the pass to Coutinho went in, he attacked the space behind Coutinho. The only man who was able to stop Davies is the one in yellow, who wasn’t even watching him. There is no one else behind him; if Coutinho could have successfully laid it off to Zirkzee, Davies would be in alone on goal. Instead, Coutinho got his touch wrong, and Bayern turned the ball over. While this additional creativity from Alaba made Bayern more of a threat going forward, the adjustments made at halftime were to be crucial for Bayern’s success in the match.

While Bayern struggled in the first half, particularly down the left side of the pitch, Hansi Flick’s adjustments ultimately made all the difference in this match. It’s clear that his squad was told to focus more on the area known as the half-space, which is the area to the left or right of the centre space directly outside the penalty area.

This attacking of a certain space often involved Thomas Müller, who leads the Bundesliga with 16 assists. 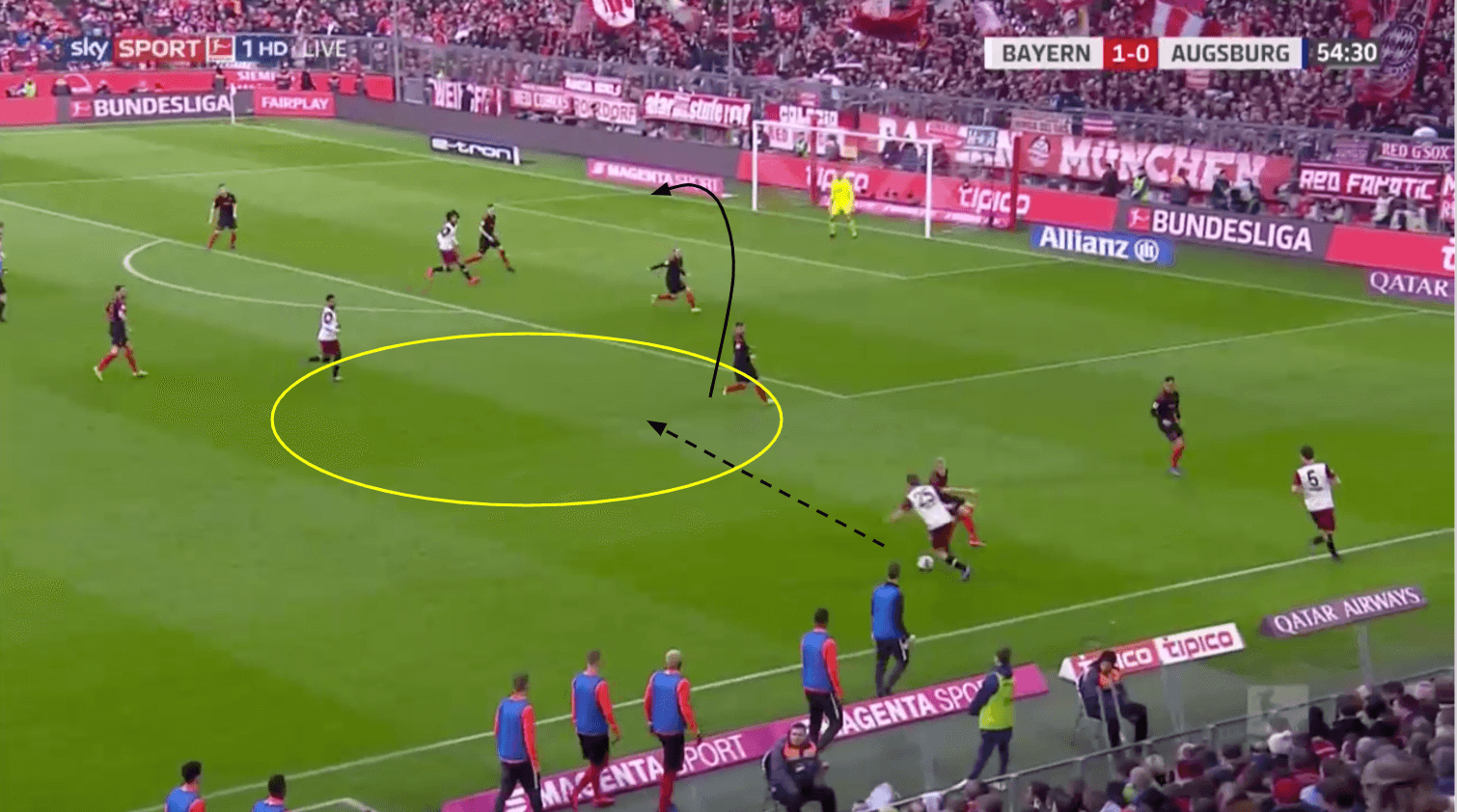 Here, Müller received the ball on the right flank. As Müller cut in with the ball, he looked to attack the half-space identified in yellow. This area is where a majority of goals come from, as it is a difficult space to defend properly. As he cut in, Augsburg’s defenders weren’t able to decide whether or not to step up and pressure. If they did, a run in behind them would be deadly. Instead, Augsburg allowed Müller to pick his head up and try to curl the ball towards the back post, where he had Coutinho making a run from midfield. While the service wasn’t the best, this was one of the first instances where Bayern looked to exploit this dangerous area.

Eight minutes later, Müller worked to get into the same space to create a chance. 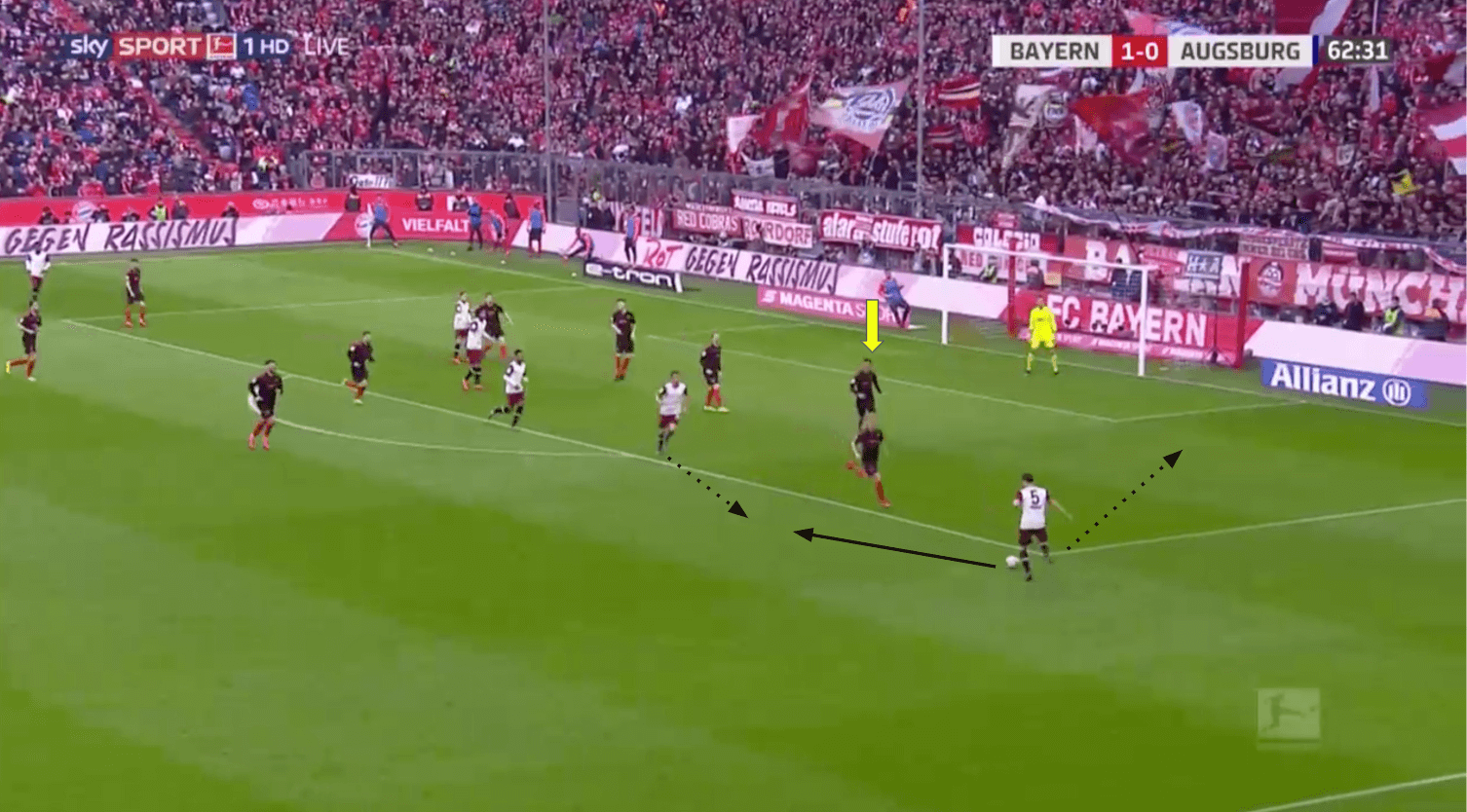 As the ball came across to Pavard, the defenders shifted and Müller checked back into the half-space. Pavard used his first touch to play Müller before running toward the end line. As Pavard made his run, his defender followed, buying more time for Müller to make a decision. Augsburg’s left back, marked with the yellow arrow, had to freeze. If Müller played Pavard through, he would be responsible for providing the defensive pressure. This allowed Müller to turn and face the goal, where he played that same lofted pass to the back post, where Coutinho was waiting to cross the ball back across the face of goal. Ultimately, Augsburg cleared the ball, but the chance to score was there.

Bayern’s second goal was a result from the persistence in attacking the half space, and it ultimately guaranteed the victory for the Bavarians.

Leon Goretzka began the move by attacking the half-space on the dribble. He laid the ball off to Gnabry, who took his dribble towards that same space, just as Goretzka was leaving it with his run towards goal. As Gnabry arrived, Goretzka checked back, and the two men played a series of 1-2 passes through the half-space, which resulted in Goretzka wide open with the ball at his feet in front of goal. From there, he finished cooly, securing Bayern’s victory and highlighting Hansi Flick’s change in tactics.

With their victory, Bayern Munich were able to maintain their lead at the top of the Bundesliga, even though Borussia Dortmund put on the pressure by defeating Borussia Mönchengladbach on Saturday. Bayern look to win their eight Bundesliga title in a row, and their next challenge comes from Union Berlin this coming weekend. After that, they have their second leg of their UEFA Champions League tie with Chelsea in Munich.

Augsburg find themselves in 14th place in the Bundesliga. Luckily for them, they are currently five points above the relegation zone, with their next match coming against Wolfsburg. While Martin Schmidt’s squad primarily looked to defend against Bayern, they demonstrated their ability to hurt opponents on the counter attacking, which they’ll need to do with more consistency if they intend on remaining in the Bundesliga next season.