Southampton have had a tumultuous season. After struggling severely in the first half of the season, including spending a brief amount of time in the relegation zone, the club sacked manager Mark Hughes. Since then however, the Saints have hired former RB Leipzig manager Ralph Hasenhuttl and have made an inspired return to safety. Multiple factors, from a change in tactical system to player selection, have been the backbone to this recent comeback. Few players have been as instrumental throughout it as defender Jan Bednarek.

Who is Jan Bednarek?

Jan Bednarek began his football career at the academy of Lech Poznan, the same club at which Robert Lewandowski and Dawid Kownacki, among other prominent Polish players, amplified their skills. There, he made his professional debut at only 17 years of age. In 2017 he helped lead the club to the Polish Cup Final and a third place finish in the Ekstraklasa. Following his success in his homeland, Bednarek transferred to Southampton that summer.

Despite scoring on his Premier League debut against Chelsea near the end of the 2017/18 season, Bednarek was sparsely played by then-manager Mark Hughes. Ralph Hasenhuttl however has started Bednarek in virtually every league match since signing on as manager, and the Polish centre-back has begun to show promise.

Since Hasenhuttl took over at Southampton, the defence has been reorganised as a back five. Bednarek plays as the right centre-back alongside right wing-back Yan Valery and either Jack Stephens or Maya Yoshida to his left. Defensive positioning has been a major factor of Bednarek’s success. He has consistently been successful in covering for Valery on the right when the wing-back pushes forward in attack. 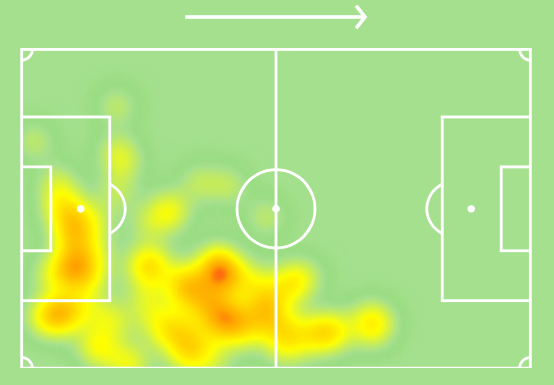 In these heat maps from Southampton’s recent 2-1 victory over Tottenham, you can also see Bednarek’s positioning when playing in a deep block. Hasenhuttl’s tactical system at Southampton has largely revolved around the counter-attack, and having an organised deep block can be very valuable in this method.

When positioned in a deep block, visually scanning the pitch is absolutely critical. Bednarek is very good at making quick, consistent glances around the final third to make sure attacking players are marked and his defensive teammates are in an organised position.

Bednarek was arguably the man of the match in Southampton’s 2-1 victory over Leicester, tallying match-highs of five blocks and 12 clearances.

However, playing a deep block doesn’t mean you can’t play aggressively in defence. Bednarek has thrived in Hasenhuttl’s pressing system as he has an excellent ability to stop attacks. He ranks near top of the league in interceptions (fourth with 2.7/90 minutes), clearances (third with 7.2/90, 0.1 behind teammate Jannik Vestergaard), and blocks (second with 1.4/90). He is rarely beaten one on one, using his speed and strength to out-position and out-maneuver the opponent.

Bednarek had a difficult task against Chelsea marking Eden Hazard, yet he stopped the Belgian for much of the match by staying disciplined in the defensive formation. Southampton recorded their first clean sheet under Hasenhuttl in this match.

Bednarek doesn’t just prosper on brute athleticism alone. He also uses his intelligence and vision in his play-making, as shown by his impressive interception and shot-blocking numbers.

Bednarek stated he was moved early in his youth career from striker to defender because of his size. There may have been other factors involved, but there is little doubt that it was the correct move. Bednarek’s defensive abilities have grown considerably in the short time he has been regularly playing for Southampton, and that growth should continue under the guidance of Hasenhuttl.

While Bednarek is more of a defensive-minded centre-back, he has shown hints of capable distribution from the back. His scans of the pitch also aid in this tactic.

After receiving the ball, Bednarek quickly sees two open midfielders. He makes a direct, attacking pass to one after noticing how that midfielder will have space to make a short pass to the other, who is better positioned to make another pass up the pitch. This ended in a counter-attacking shot off the post for Southampton.

Just 22 years old, Bednarek’s development in passing and build-up from the back will be a key factor of his success in an age of more modern, ball-playing centre-backs.

Over the international break, Bednarek was called up for his 13th appearance for the Polish national team. The White Eagles had a disappointing 2018 World Cup, but there was a small consolation for Bednarek  as he scored his first goal for the national team on the biggest stage.

His goal ended up being the match-winner in Poland’s only victory at the tournament. Since then he has played in seven of Poland’s last eight matches, and started in six of those seven. Primarily alongside Kamil Glik, Bednarek has quickly earned a core spot in the starting lineup, and can learn plenty from the Monaco defender.

“He is very aggressive in the one-on-one duels at the back, and also with the ball he is calm and has a good view for the surrounding players. He is also loud, giving good tactical advice for the other players, and I think he is a very good package as a centre-back.” –Ralph Hasenhuttl on Jan Bednarek

When it comes to centre-backs, it is common to see an emphasis of skill placed on either the defensive phase or attacking phase. The best centre-backs in the world however can often do both. While Jan Bednarek fits more of the defensive-minded mold for now, his attacking contribution is only improving. His positioning, strength, and vision all advance his development. Whether on England’s south coast or in Poland’s back line, Bednarek is proving he can play a key role in the defensive success of his team.