In joining Manchester United, Jackie Groenen has had a subtle yet important role in a squad making its first steps in the FAWSL. United have made an immediate impact in the league and seem to be on the brink of breaking into the upper tier of the division. In this scout report, we will take a look at exactly how Groenen is able to expand and support United’s attacking tactics. After analysis, we find that she is able to use a dynamic mix of skills with and without her feet to elevate the United attack. This tactical analysis will look into exactly how she does it.

Born in Tilburg, Netherlands, Groenen grew up just across the border in Poppel, Belgium. She made her first-team debut with SGS Essen (Frauen-Bundesliga) in January of 2011 at the age of 16 years old. Later that year, she joined FCR 2001 Duisburg, who she played with until the club’s insolvency in late 2013. Chelsea quickly pounced on Groenen, acquiring her in February of 2014. Groenen returned to Germany in June of 2015 to join FFC Frankfurt, where she remained up until signing with Manchester United last summer.

Groenen has become an influential fixture in the Netherlands Women’s National Team, gaining her first cap in 2016. She quickly made an impact and helped the Dutch to win the UEFA Women’s 2017 Euros (she was named to Team of the Tournament). Recently, she started every match in the 2019 Women’s World Cup that saw the Dutch advance to the final.

Sun Tzu once said, “All warfare is based on deception.” Groenen has fully allocated this idea within her individual play style. By weaponizing head movements and body orientation, she is able to mislead the direct opponent as to her true intentions with the ball.

This allows her to guide an opponent’s pressure in the desired direction while planning to move into a different attacking space. She is able to do this primarily with her eyes/head and torso.

Groenen can also be found using her body orientation to mislead defenders. As a rule of thumb, attackers typically play the way they are facing and receive the ball across the body with the furthest foot. Groenen is aware that when receiving the ball, the pressuring defender will more than likely target her furthest foot from the ball. She uses this to her advantage and draws opposing players in to create space to move into.

Below we see an example of Groenen misleading a direct opponent with her body orientation. Groenen is set to receive the ball with her right foot and has her body open to the left side of the pitch. Groenen has already scanned the field and is aware that a Manchester City defender will immediately pressure her from her right side. Groenen is also aware that the City player will almost assuredly specifically pressure her right foot, which is in position to receive the ball. 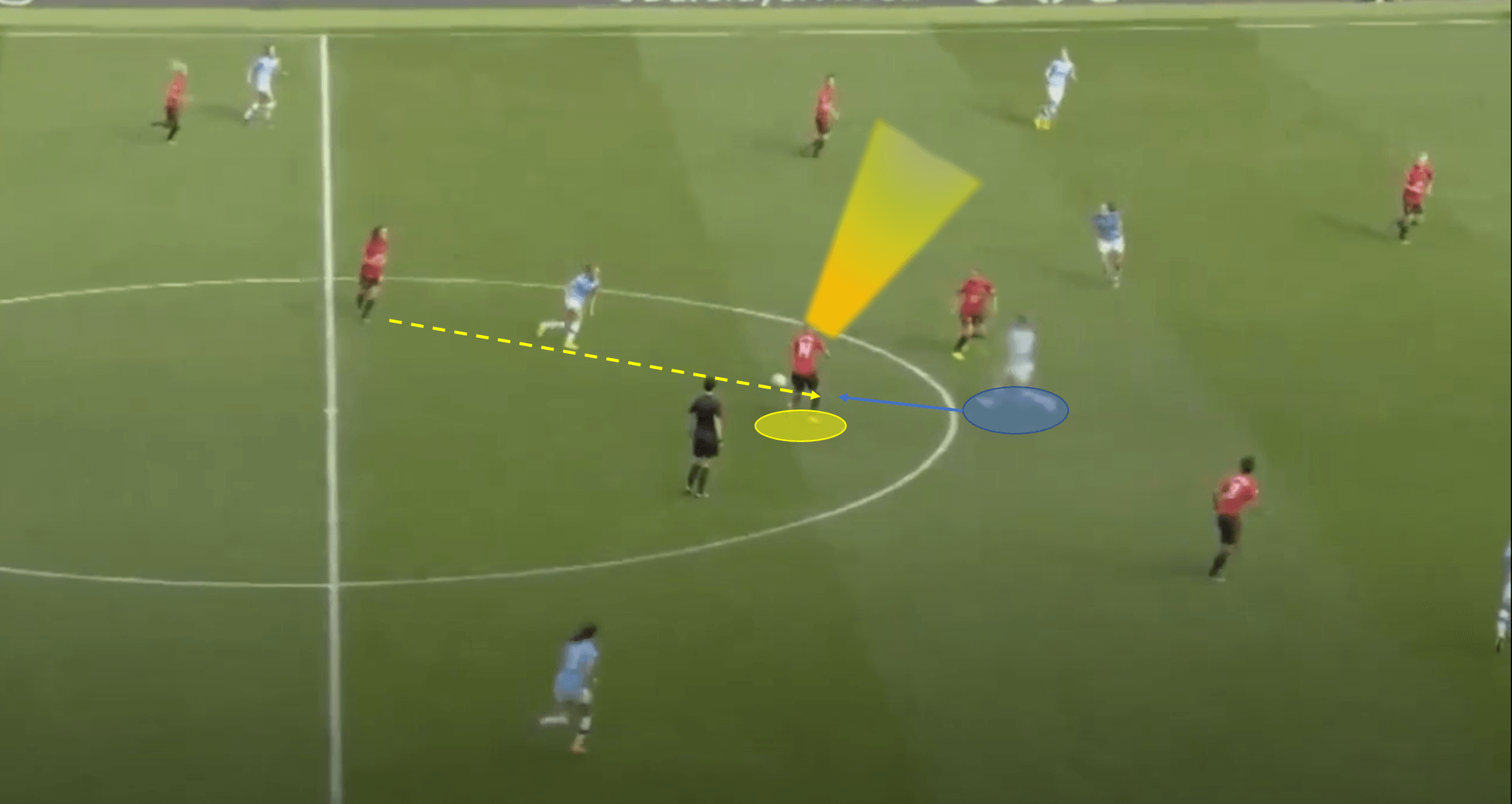 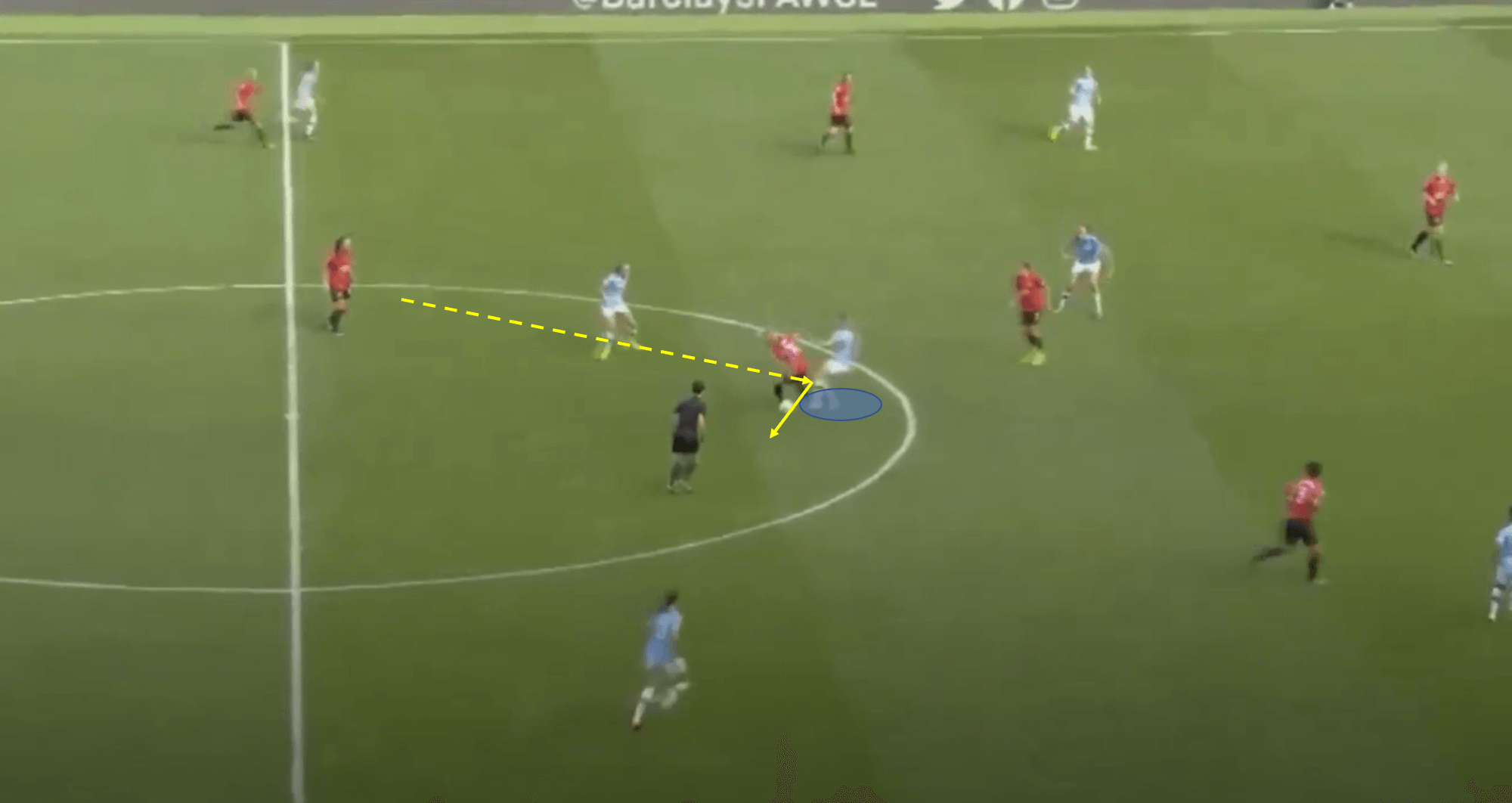 Groenen then spins her body upfield and takes a touch forward into newly opened space. The City player is directly behind her, but Groenen now has space to penetrate and has her body in between the City player and the ball. We can also see that the space Groenen is penetrating into is open because Groenen enticed the City player out of that space. 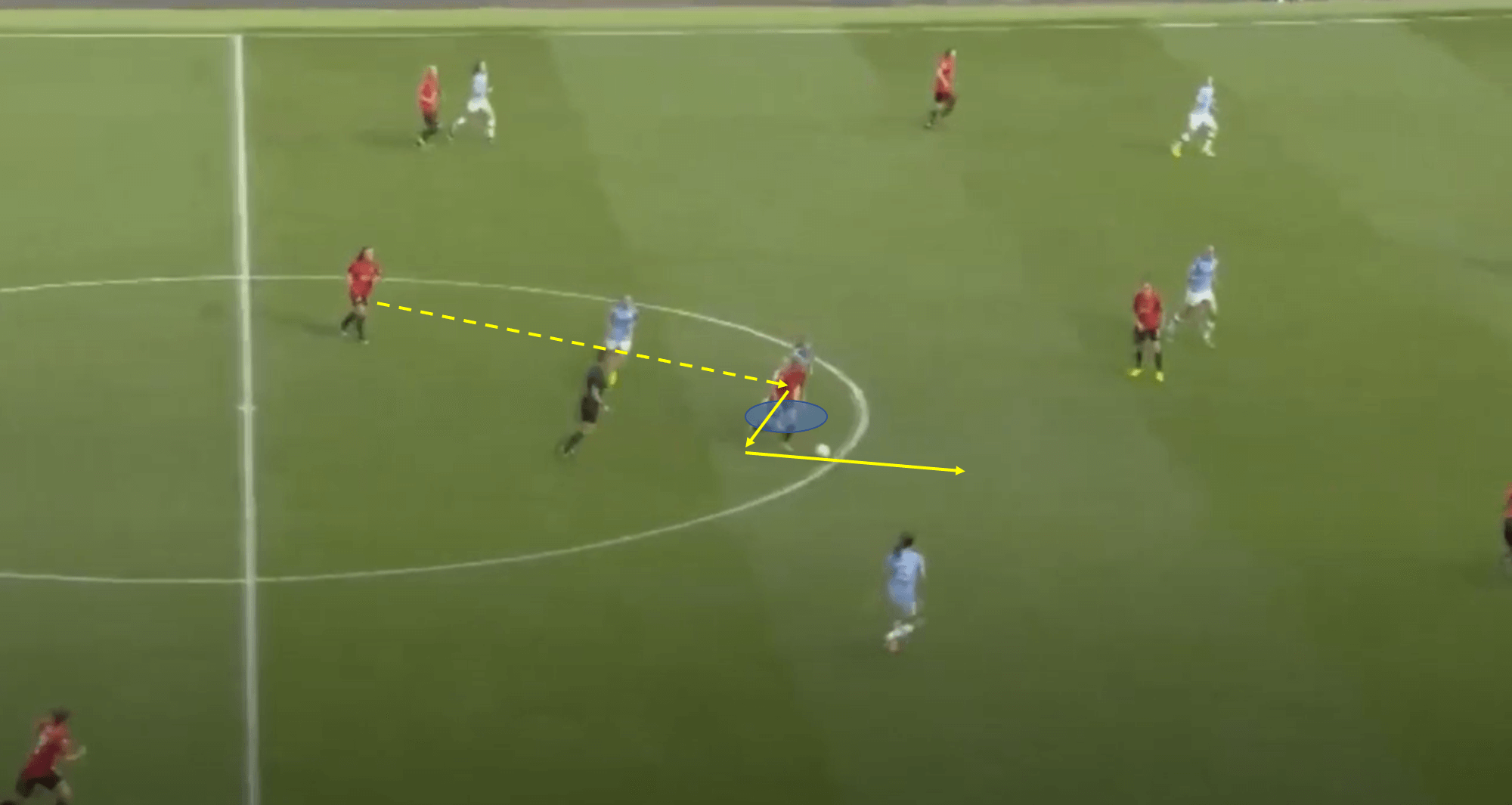 Again, we have another example of Groenen deceiving a direct opponent. Groenen has received a back-pass from Leah Galton on the left flank. Reading have a fairly good defensive structure in the moment, so Groenen begins to dribble backwards to safety and aims her vision to the centre of the pitch. In this instant, her ball movement and body language imply she is looking to recycle possession and move the ball to a different channel. 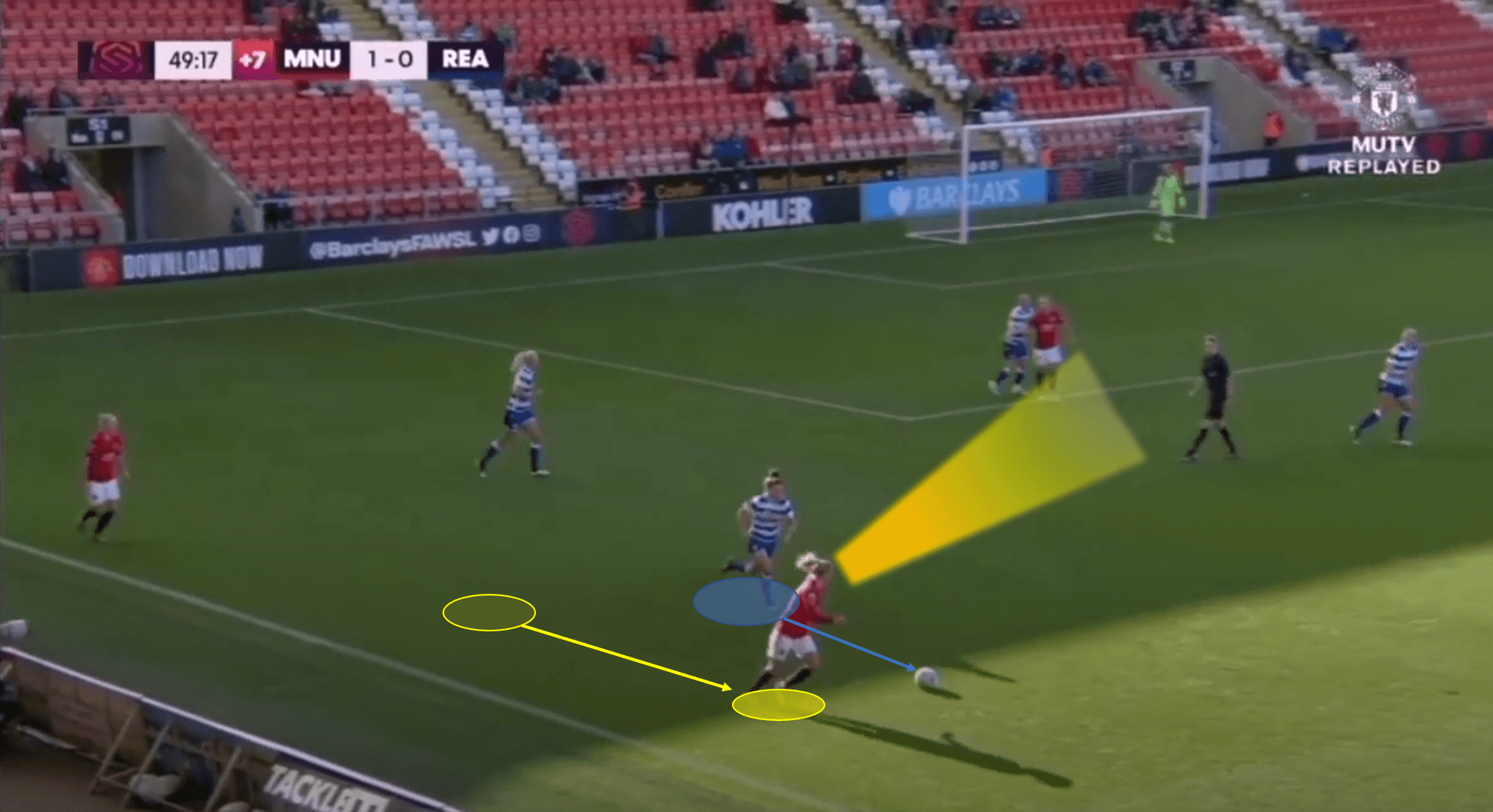 The Reading player reads this intention and moves to pressure Groenen from a central position in an attempt to cut off the central pass. Groenen torques her body as if to pass the ball centrally and at the last moment uses the sole of her right foot to drag the ball across her body. We can see in the image below that Groenen has moved the ball to her left side and is accelerating into newly created space. 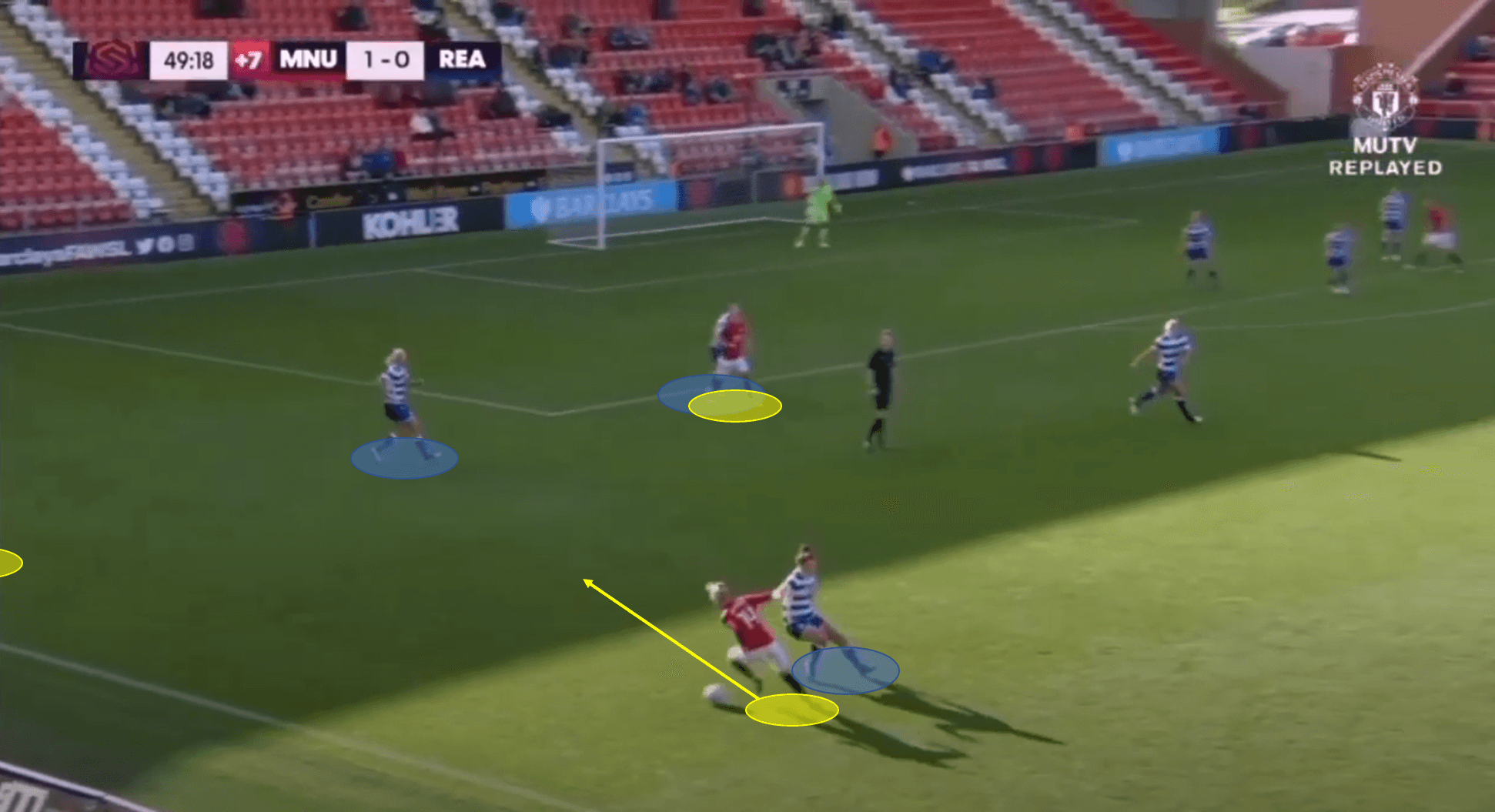 We can also see that the Reading player has overshot the ball and is about to plant her feet to change direction as Groenen is already bursting away. It should also be noted that Groenen has created a temporary 3v2 numerical superiority on the flank. Her dribble not only disguised her intention but opened up space for her to penetrate.

Groenen is able to use deception in individual play to confuse and mislead direct opponents. This allows her to more easily retain possession and to create attacking platforms for herself to move in to.

Vision and the long pass

Groenen’s can be seen as a sort of orchestrator of the Manchester United attack. One main statistic brings this to light. Groenen has completed 43 progressive passes this campaign, which are “Completed passes that move the ball towards the opponent goal at least 10 yards from its furthest point in the last six passes, or completed passes into the penalty area. Excludes the passes from the defending 40% of the pitch.”

This means that Groenen creates penetrating passes from the middle and attacking thirds after an attack has slowed down and become stagnant. Groenen is able to take control of the ball and ignite attacks.

She is able to do this because of her ability to execute long passes from deep and, just as important, she has the vision and awareness to find the potential passes. She does this by surveying the pitch often and quickly.

In each moment in football, there are 4 main reference points the players can observe. They are: where the ball is, where your teammates are, where your opponents are and where space is. Based on these four reference points, players can make calculated decisions in the moment and execute the desired tactic. The more a player checks their surroundings, the better picture they have of the moment in the match. The more pictures the player has, the more they are able to make quick and intelligent decisions.

Groenen can be seen constantly checking her surroundings and assessing everyone’s position on the pitch. She is constantly aware of possible attacking platforms.

Groenen’s passing ability and vision enable forward United attackers to constantly be a threat to the opponent backline. She is always capable of playing an accurate ball behind the backline, so opposing teams must constantly be ready to anticipate United forward players making darting runs behind.

Because United regularly use three attackers to occupy four defenders, a numerical overload is created in the defensive and midfield lines. Below we can see that United, who typically line up in a 1-4-2-3-1 (50.8% of matches), are able to have an 8v6 overload in the build-up phase (yellow box) due to the wingers and forward pushing high into the opponent backline (blue box).

This positional tactic is predicated on Groenen’s ability to quickly observe potential attacking platforms and execute dangerous passes into space behind the opposing line. If Groenen were not able to see or complete these types of passes, the opposing back four would be less threatened by the United attackers and opposing managers would be able to push defenders higher up the pitch to negate United’s positional overload. 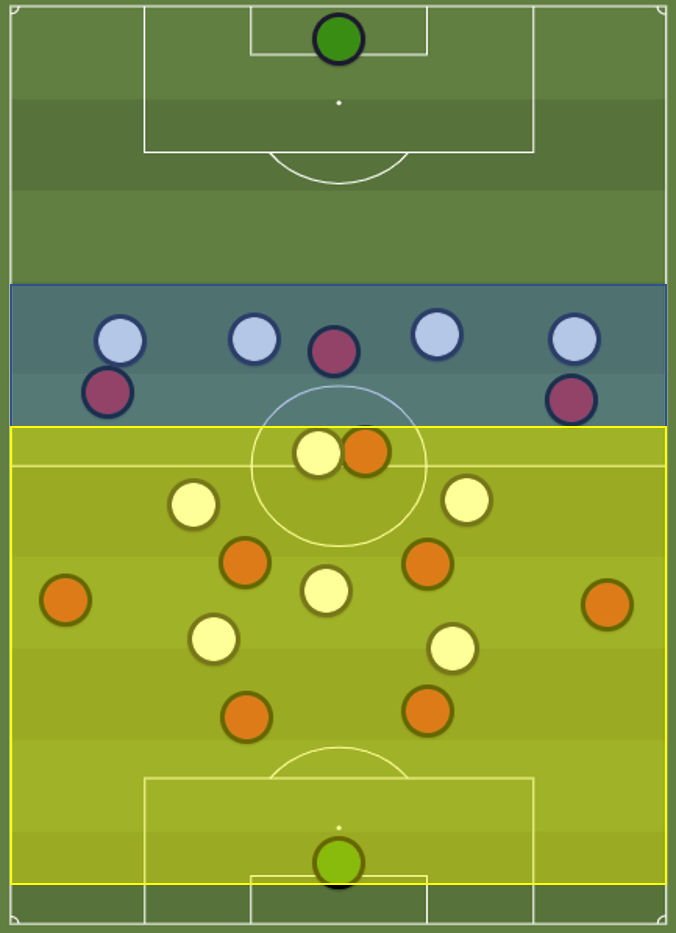 Below we see a moment in which Groenen is seen using her vision and passing ability to quickly create a United chance on goal. In a counter-attacking moment, Lauren James plays a pass into the forward path of Groenen. Groenen continues forward and keeps her eye on the ball to gauge its trajectory. 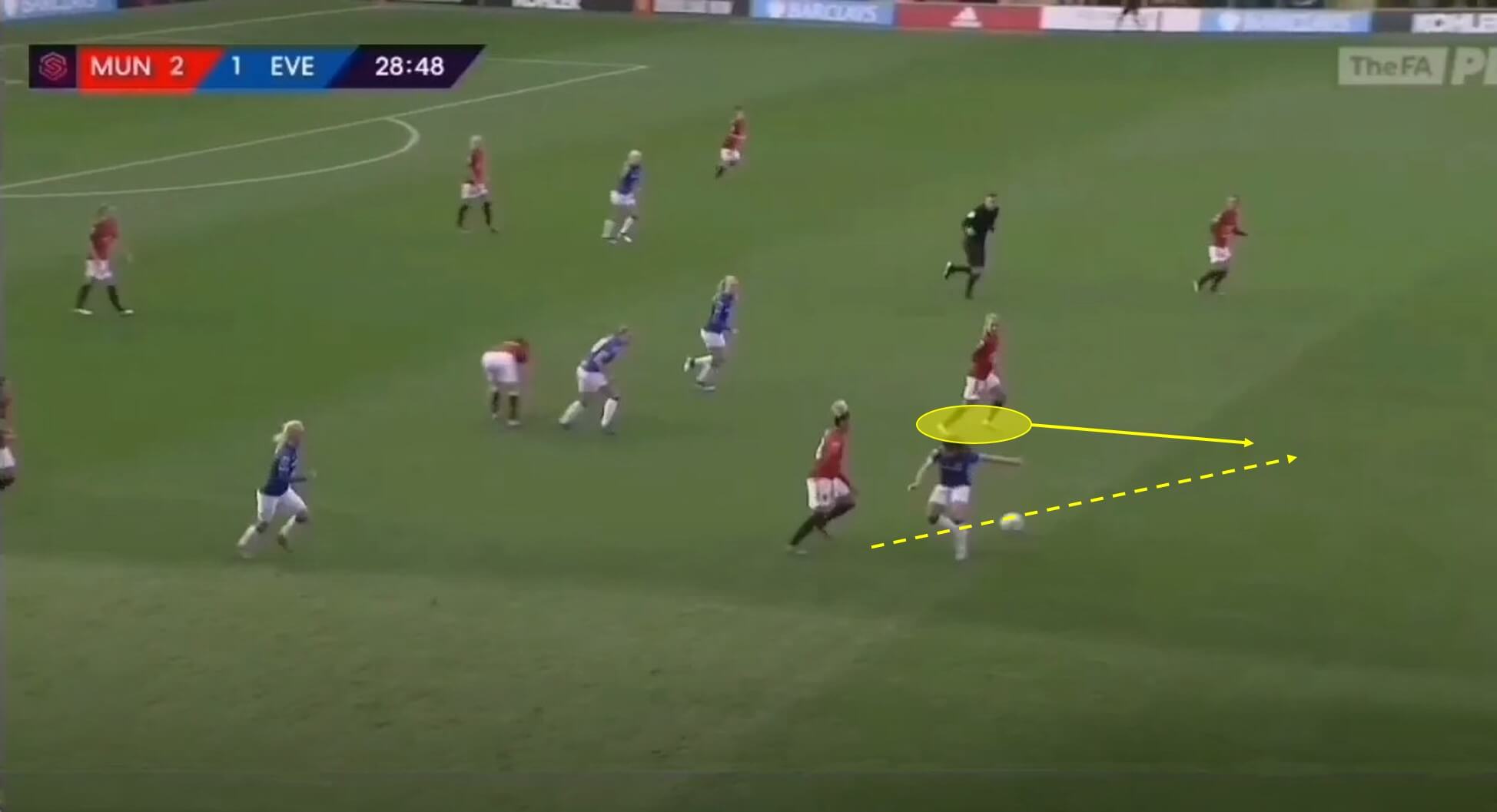 As soon as Groenen calculates how the ball is currently travelling, she takes her eyes off the ball. While the ball is still in motion, she turns her vision upfield to once again see where her teammates are, where the opponents are and where exploitable space is. As we will see, she is looking at five Everton players and two United players. Not an ideal situation. 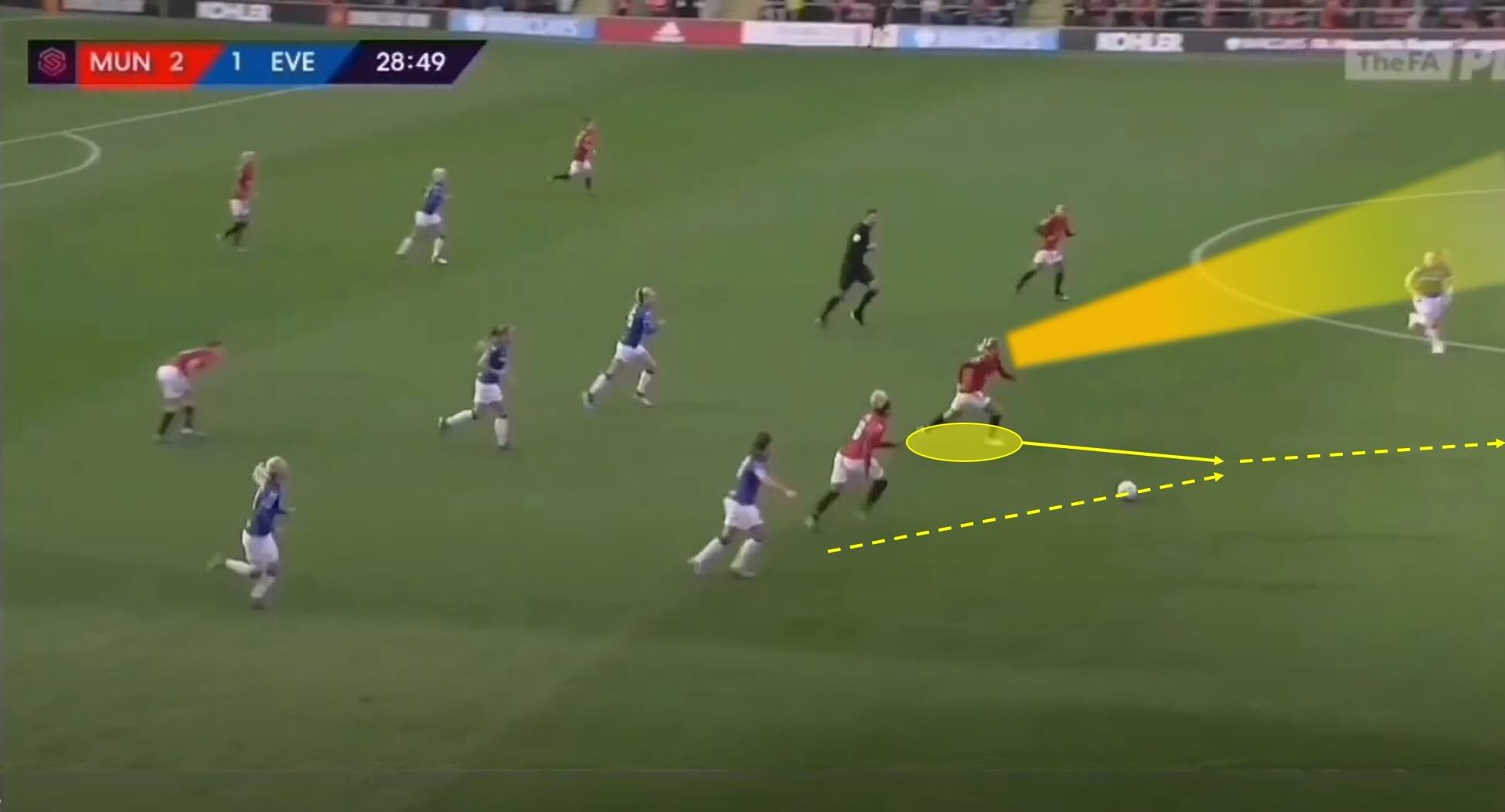 Groenen, while sprinting, executes a one-touch curved pass that travels through a gap in the Everton backline. The ball is hit with a spin so that a curve is created. As the ball travels past the Everton line it curves into the forward run of Galton, who does not have to break stride to receive the ball. 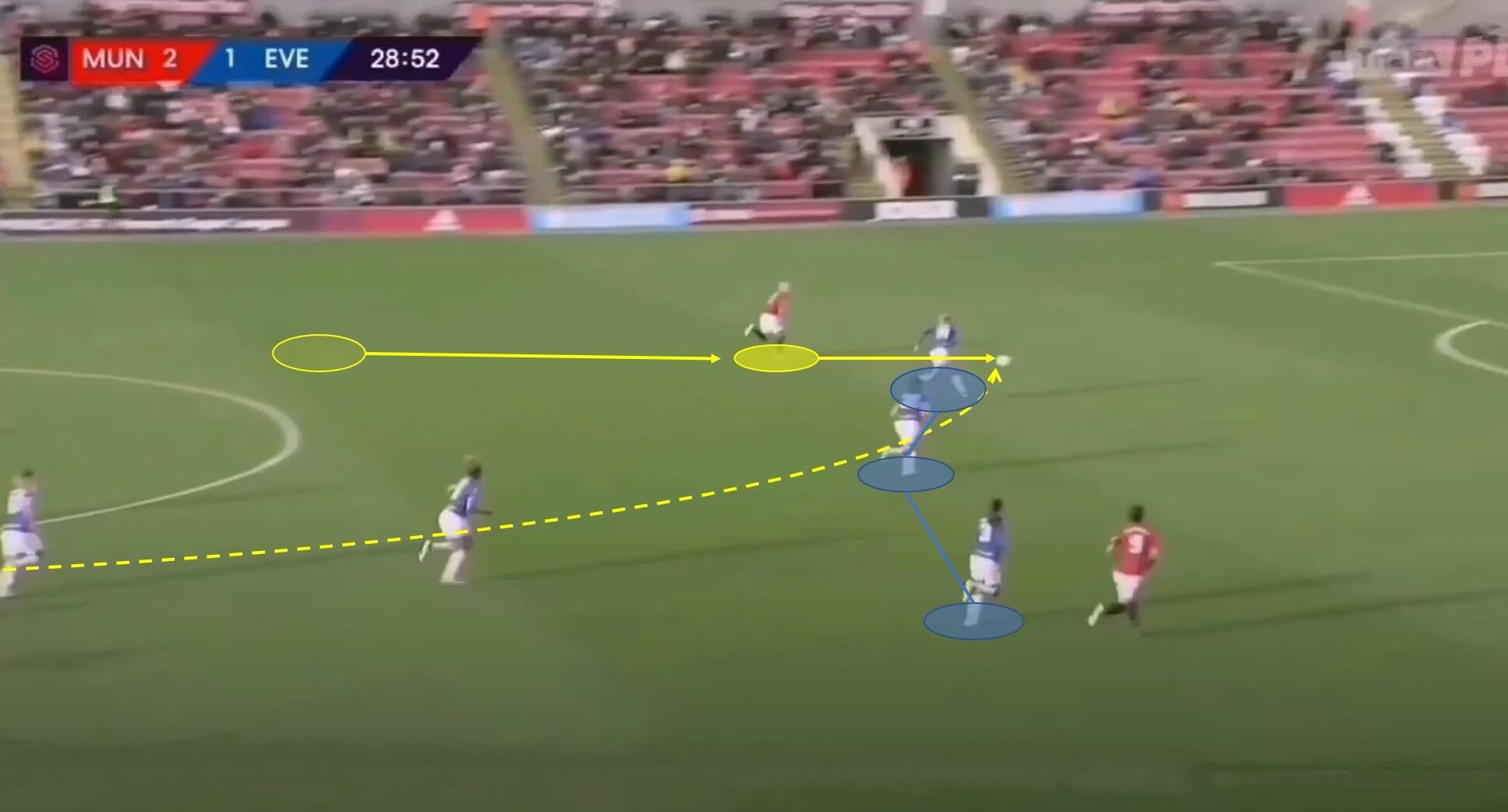 Note that this single pass has circumvented five Everton players.

Because Groenen is capable of executing incisive passes like this at any time, she not only has the means to create goal-scoring chances on her own but also forces the opposition to adjust their defensive tactics to her abilities.

When compared to other midfielders, Groenen does not exactly fit into the attacking central midfielder archetype. She is not the type of player who primarily engages in aggressive forward attacking 1v1s and constantly creates chaos in the opponent’s box with bombing forward runs.

That being said, Groenen is quite skilled in a different type of 1v1 situation, possession retention. Groenen excels not in penetrating past opposition with her dribbles but by making sure that when she has the ball, it will be very difficult to win it off of her.

Groenen is proficient in evading defenders from different angles of pressure (frontal, side, behind, etc.), while retaining possession. Through these dribbles, she is also able to create space and time for her teammates.

Below we see a moment in which Groenen keeps possession against Reading, who have one of the most intense presses in the FAWSL.

United’s goalkeeper has sent a long aerial ball to Groenen, who has drifted into the right flank. This is almost exactly what Reading want. Reading are able to pressure Groenen from three different angles while using the sideline as a “fourth defender”.

Notice, that in this moment, the nearby Reading players have both marked-out nearby United players and created cover shadows to restrict any escape routes through passing. The Reading press is well set up. 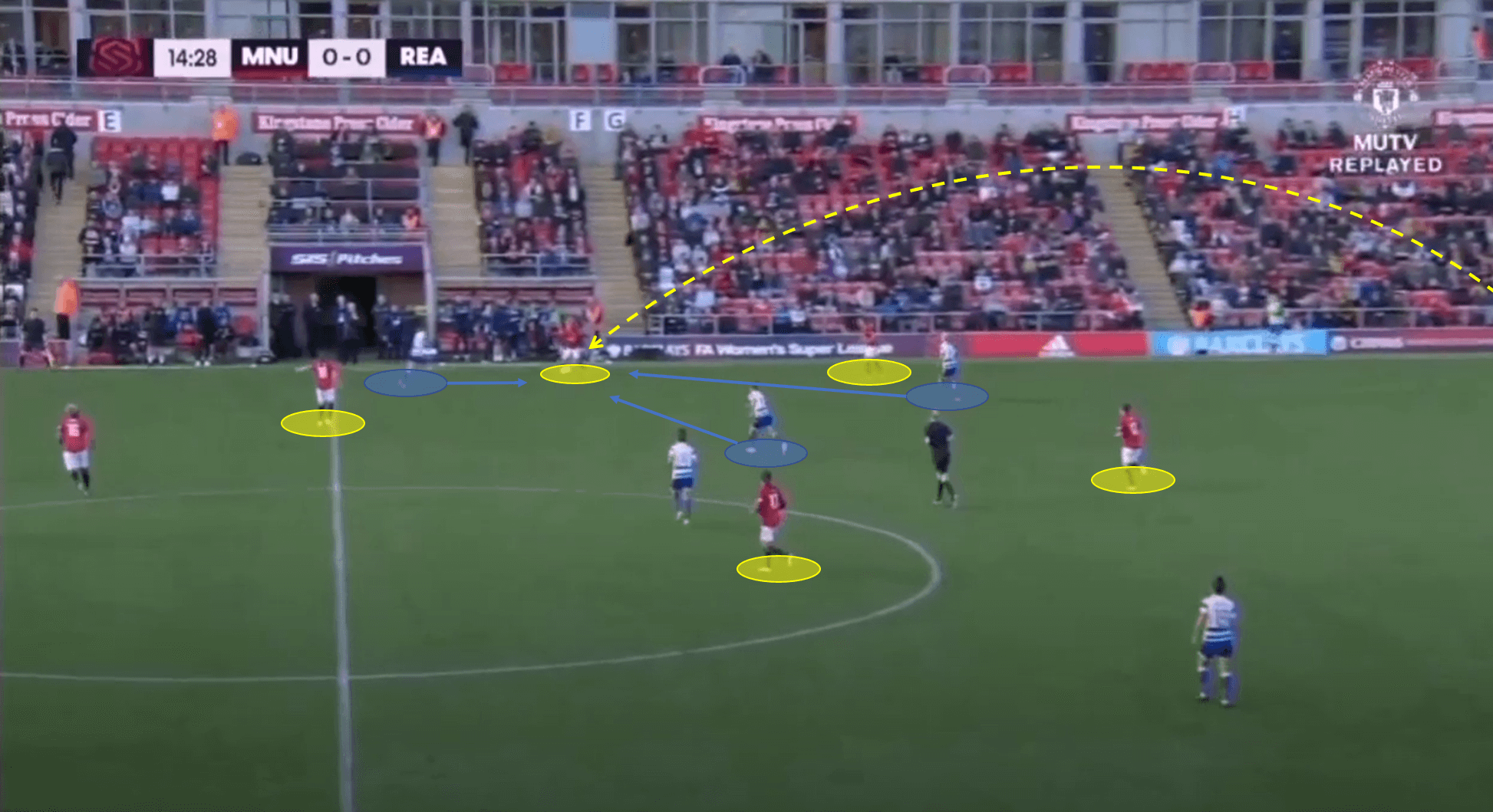 Groenen receives the aerial ball with one touch and is instantly ready to dribble. She sees that the Reading players in front of and behind her are closing in and applying immediate pressure. Instead of charging forward, toward the Reading goal, Groenen cuts towards the centre of the pitch with the aim of retaining possession. 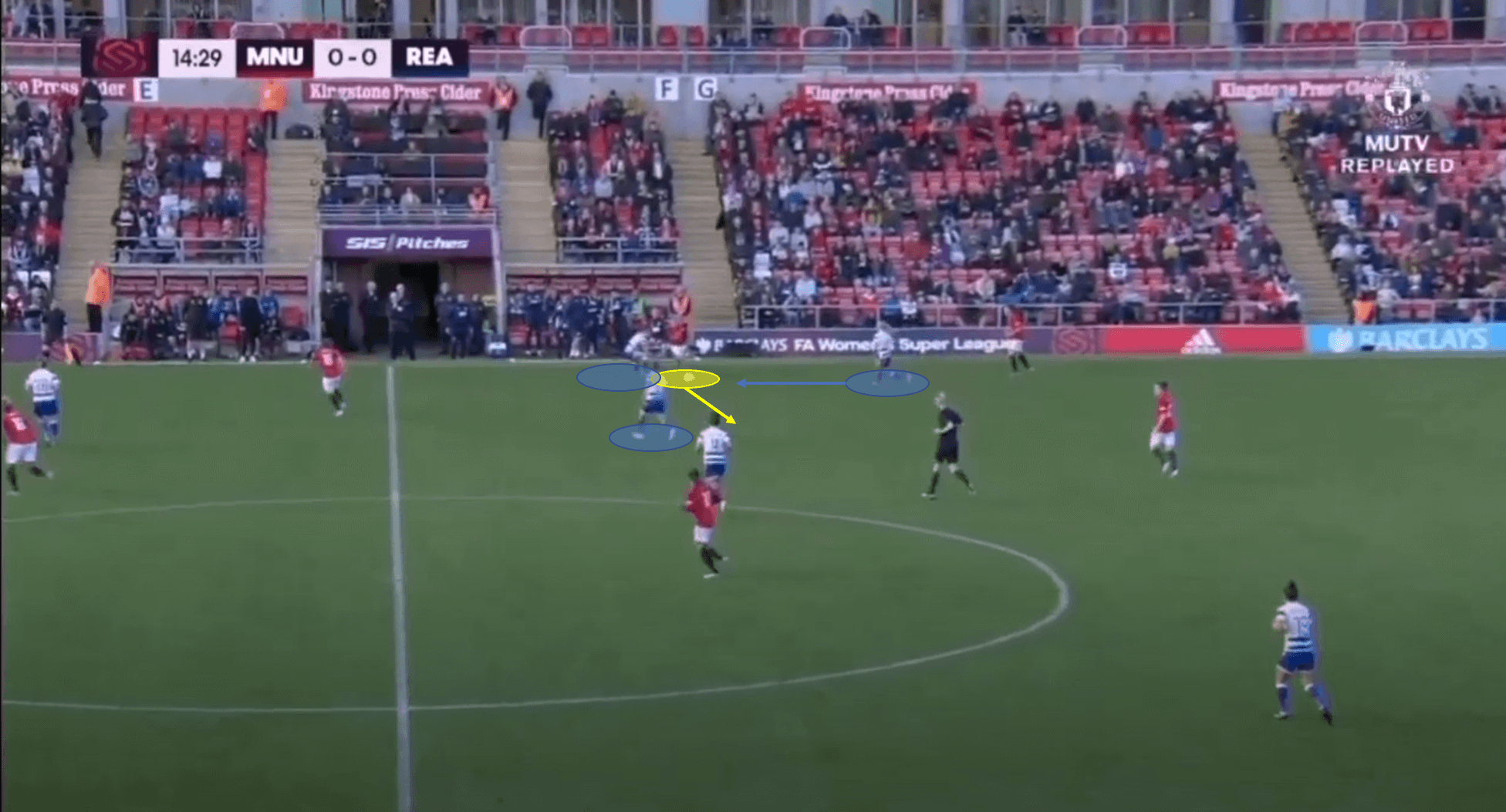 The first two Reading players move to within “touch-tight” distance of Groenen, but she is one step ahead. She has escaped the immediate pressure and is moving towards the United right halfspace. 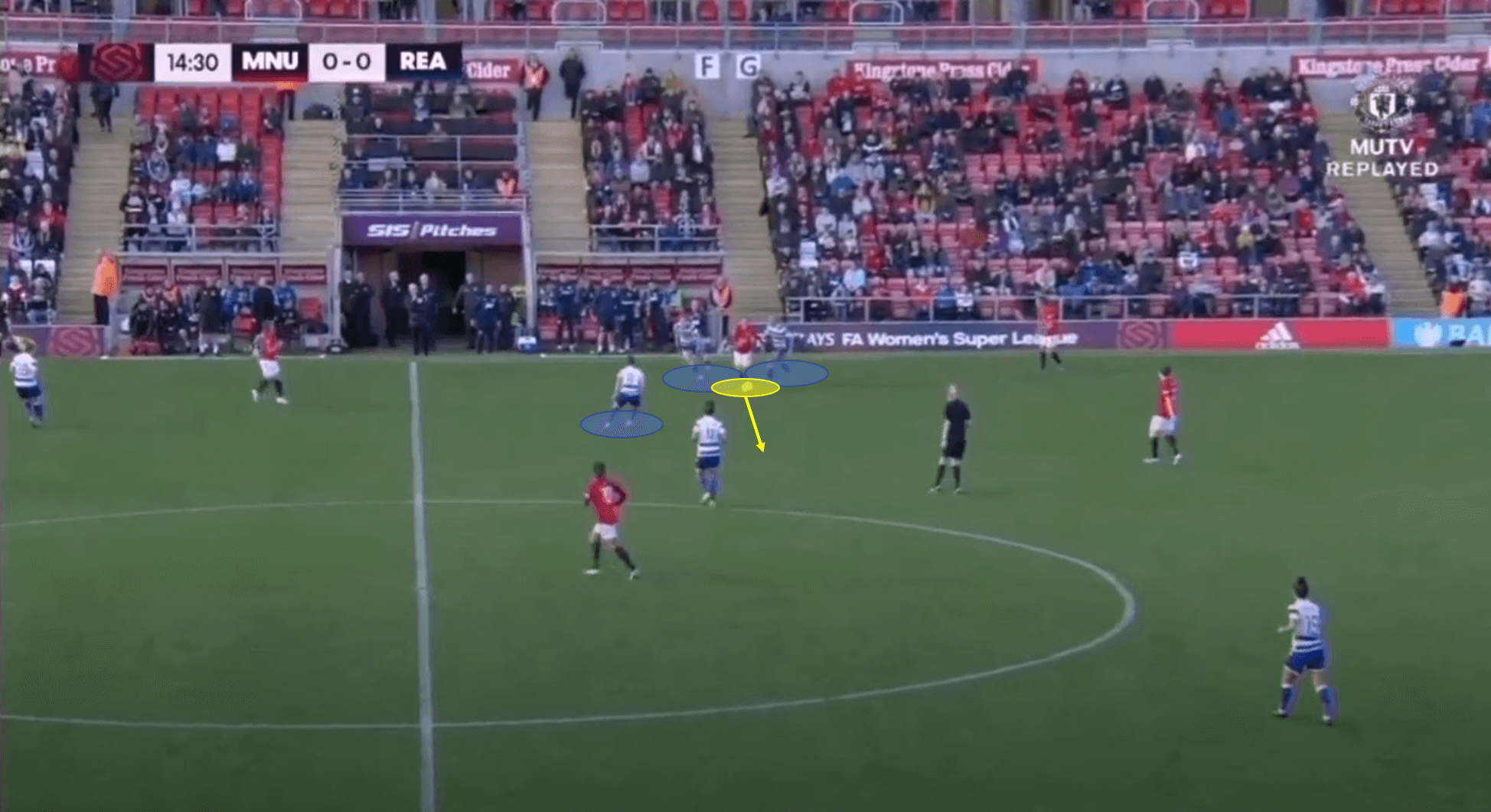 With two opposing players behind Groenen, the centrally positioned Reading player vacates her space to apply full pressure. Before she can reach Groenen, the ball is released to a now open United teammate. The initial Reading press has been bypassed and the United attack can now continue from the middle third of the pitch. Notice that by dribbling and attracting pressure, Groenen has shifted the Reading players and opened up attacking space for her teammates. 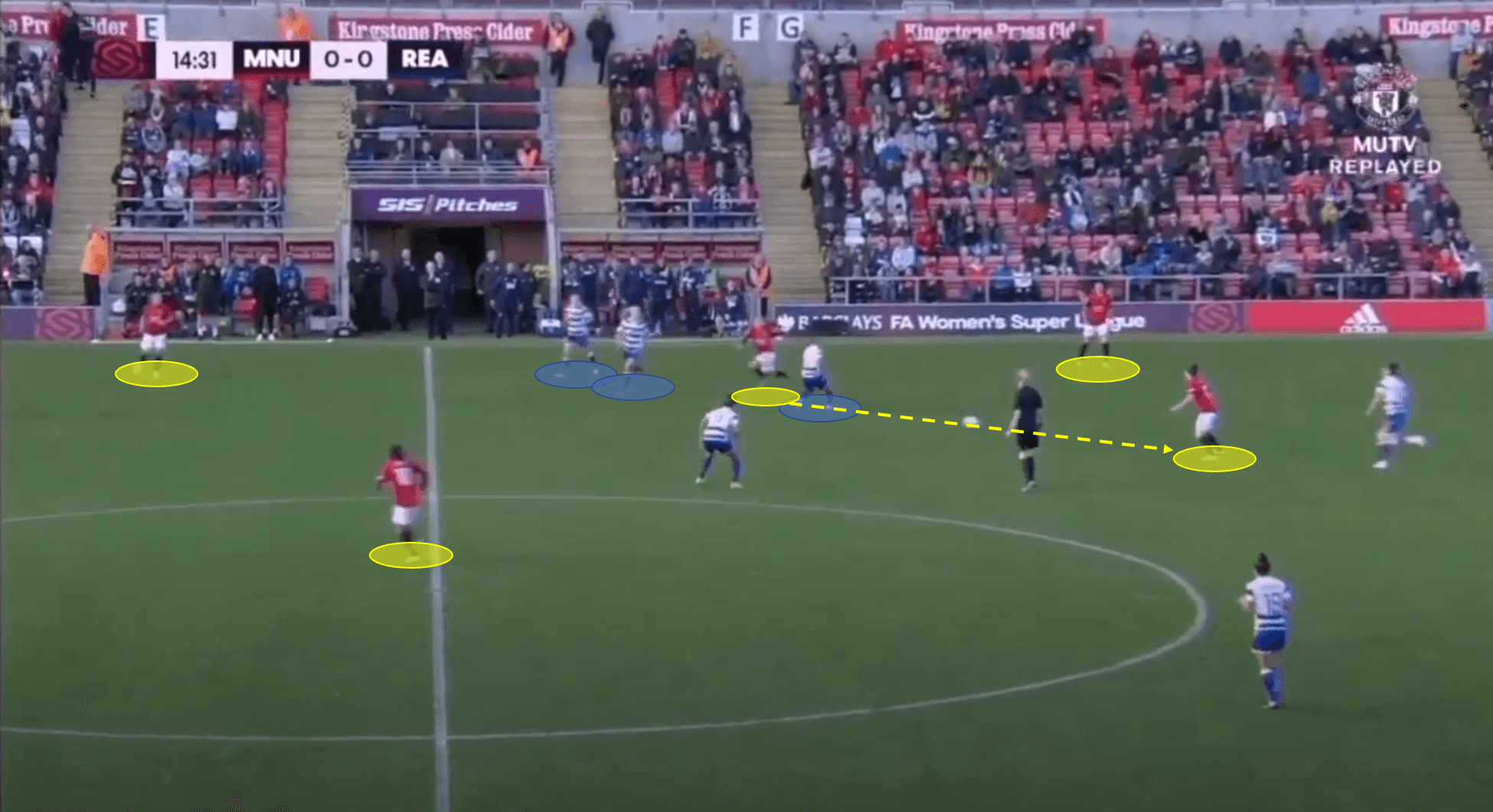 Groenen uses her dribbling ability to retain possession for United, even under intense pressure from multiple defenders. This skill set helps United to advance through high presses and retain possession in general. Groenen can be found as a near-constant attacking platform for United.

As United grow and build upon their current squad, Groenen is likely to remain a key contributor. Her individual abilities and awareness of the pitch allow her to elevate the play and tactical capabilities of her teammates. She will surely be a significant piece in the United puzzle moving forward.

Adios, Levante. Hola, Madrid: Why 24y/o “assist-producing machine” will get a major move

Our newest video is a scout report on the 19-year-old Santos forward Kaio Jorge, who is being linked to the […]