After having a shaky start to their season, Djurgaden are on track now as they look to defend their crown. They are currently on top of the table although having a game in hand against their nearest rivals Hacken who are giving them a surprisingly tough challenge so far. Their form has improved and some players are pretty much key to that.

One such player is Hampus Finndell, a 22-year-old midfielder, who has been very good for them and has continued his development after popping into their first team last season and occasionally putting in very good performances. This season, he has been a mainstay and has been deployed in multiple positions while benign consistently good for them, especially with his abilities in possession contributing a lot more to the team.

This scout report in the form of a tactical analysis discusses the strengths and weaknesses of Finndell both in the attack as well as in defence and states how contributes to the tactics and playing style of Djurgarden. Let’s begin the analysis. 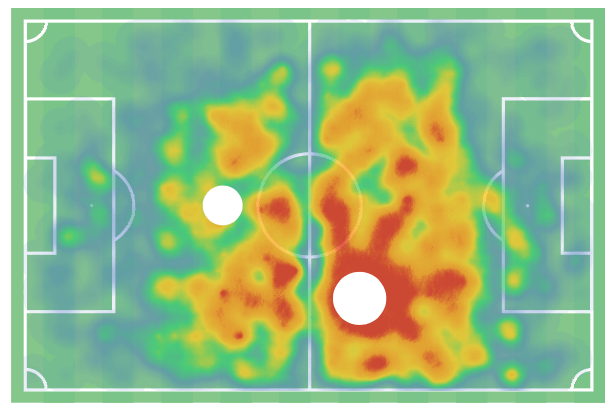 But over the last few game weeks, he has been deployed as a central defensive midfielder and has been impressing there for his team.

On the ball, Finndell has a very good first touch with both of his feet while receiving the ball and also shows for the ball in very good angles as well which opens up a lot of passing lanes for him to move the ball forward and higher up the pitch. He averages 41.16 passes per 90 in the league with an accuracy of 85.21%.

Playing as a lone DM in their 4-3-3 system, his role is to help his team move the ball into the final third of the pitch. He has so far recorded 6.62 passes into the final third per 90 with an accuracy of 68%, both of which are very good numbers for a midfielder. He has a very good passing range which means that he can play a wide variety of passes with both of his feet. 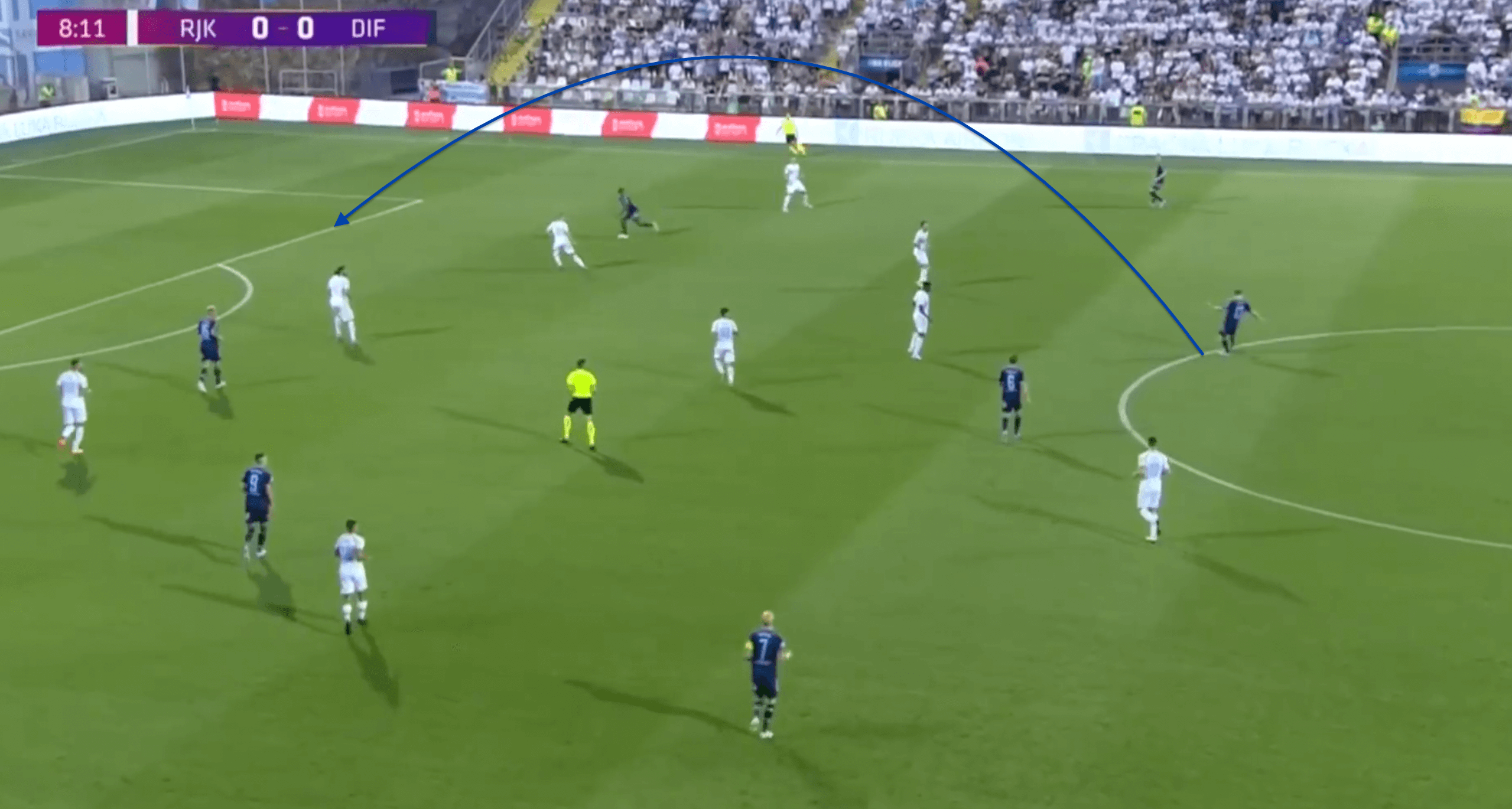 He is very good at finding his teammates making a run in behind the defence where he makes decent decisions on the ball before making a pass within a split second. Another example of that can be seen in the image below where we can see his teammate making a curved run to stay onside. Finndell realises this and delivers him a very good ball over the top of the defence which resulted in a scoring chance again.

In the above example, we can see him playing a switch to the opposite flank where he finds his team’s right-back with a brilliant pass. The best thing about the pass is that his footwork and technique are very balanced where he does not struggle to make this switch but attempts this pass with an upright body angle and posture.

We have mentioned that he receives passes at very good angles and shows himself with an open body orientation. But even when there are instances when he is not able to show himself for passes with an open shape, he makes sure that his technical abilities come to the rescue and help him to play passes in difficult situations. We can see an example of that in the following image:

He is being pressurized by an opposition player when he drops deep to show himself for a pass for his CB. Due to being pressurized directly from behind, he decides not to take an open shape with a concern for ball safety and to shield it away from his marker when he receives it. But as soon as he receives the ball he plays the first-touch pass to his teammate which is a clipped pass over the head of one of the other wingers beside him. His technique and intuition to quickly play this pass evaded the opposition’s press easily.

Having the experience of playing as a right central midfielder, he also has the ability to execute link-up play with his teammates and plays one-two passes with them. In this following example, we can see him receiving a pass from his left-back and then immediately playing a clipped pass over the opposition’s right back with his weaker left foot as his teammate is making a run already to receive the pass.

As said before, even though his left foot is his weakest one, he is pretty good at making passes with his left foot as well and has impeccable technique on that as well to make well-timed passes to his teammates.

He has averaged 5.76 progressive passes per 90 in the league so far and has also made 1 through pass per game as well. He releases his through passes in a well-timed manner which bisects the opposition’s defence correctly and ensures that his teammates are mostly the ones who will be receiving it without any interception from the opposition defenders. We can see an example of such a through ball in the image below where he finds the right moment to pass the ball in the channel between the FB and the CB of the opposition while his teammate has already started a run. 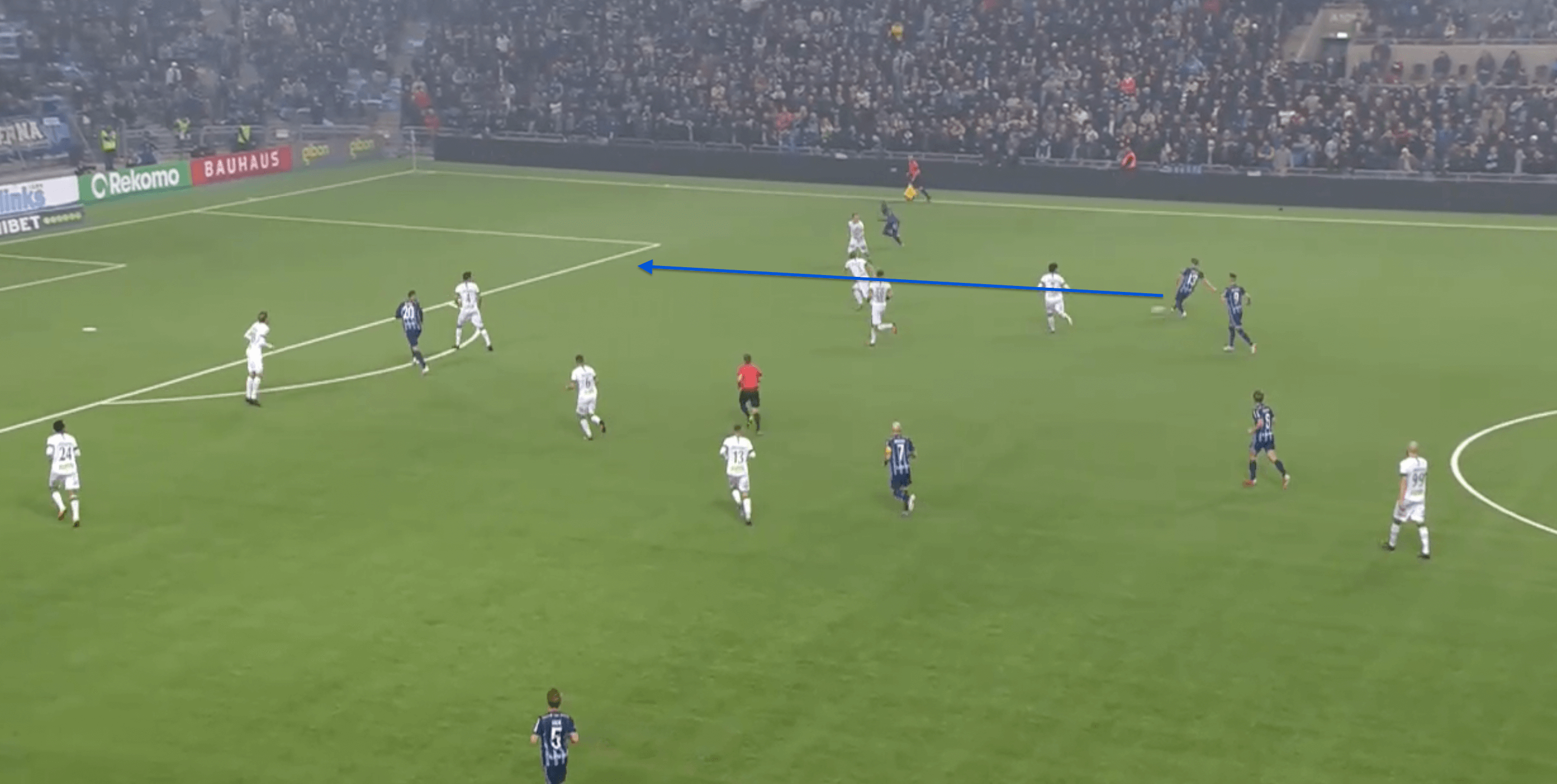 The best thing about him is that his teammates are pretty confident in making such movements into spaces and into dangerous areas knowing that, if he has the ball, they will be found with a pass from him which again speaks volumes about his ability to read the surroundings as well his technical security in terms of passing.

He also scans his surroundings before making an action. Although he does not do it a lot of times, he still gets a good imprint of the surroundings that helps him to make a pass before. In this example, we can see him looking at the defence and its shape behind and also getting a hint that one of his teammates is ready to make a run in behind. After scanning and receiving the pass, he makes a through pass behind the defence immediately to create a chance for his teammate. 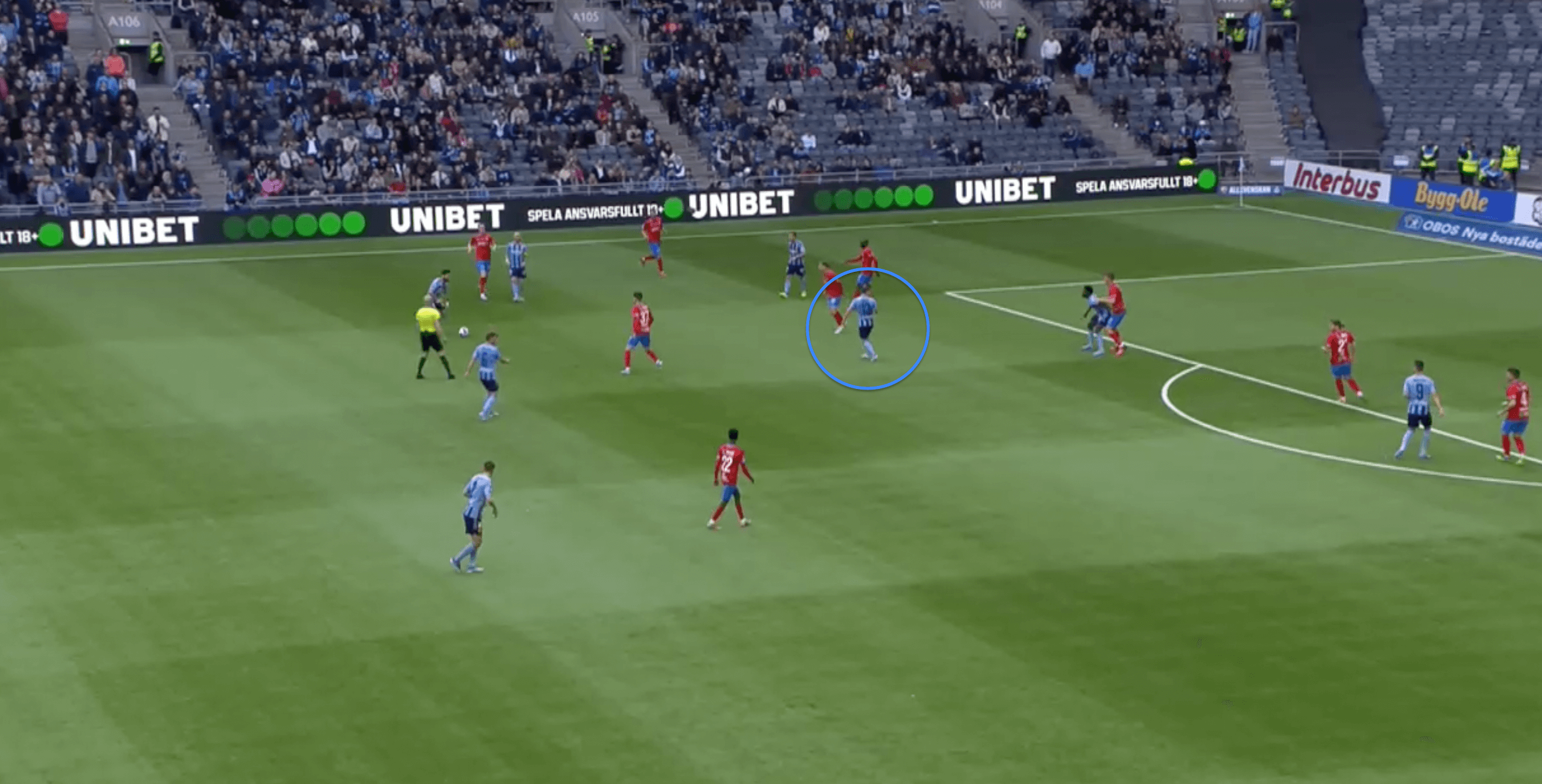 Although having a very good ability to make a wide range of passes, Finndell does not have the mobility to carry it over long distances. Despite being nimble-footed and also having short stature that makes him have a low centre of gravity, he does not have the pace to move the ball faster on the ground and is generally a bit slower on that.

The main reason for this is his running style as he uses a heel-first running and walking style which emphasizes putting a lot more pressure on his heel than his toes. This style generally gives athletes to run and move slower in general than others who put their body pressure more on their toes. This is one of the reasons why he has only averaged 0.26 progressive runs per 90 and 0.66 dribbles attempted per 90 both of which are pretty average figures for a deep midfielder.

He is slightly agile due to his low centre of gravity where, if he pre-meditates his move, he can evade past taller players, but when standing still trying to dribble or continuing to accelerate over a smaller distance, he struggles because of his running style.

Finndell has a very good sense of positioning when his team has possession of the ball. He doesn’t rush to the ball carrier always to show himself for passes which is actually one of the common mistakes that footballers make when they want to receive the ball. He would scan the surroundings and see the lanes around the players to understand which position would be very ideal for the ball-holder to pass the ball to in a simpler and more effective manner in terms of retaining the possession for the team. 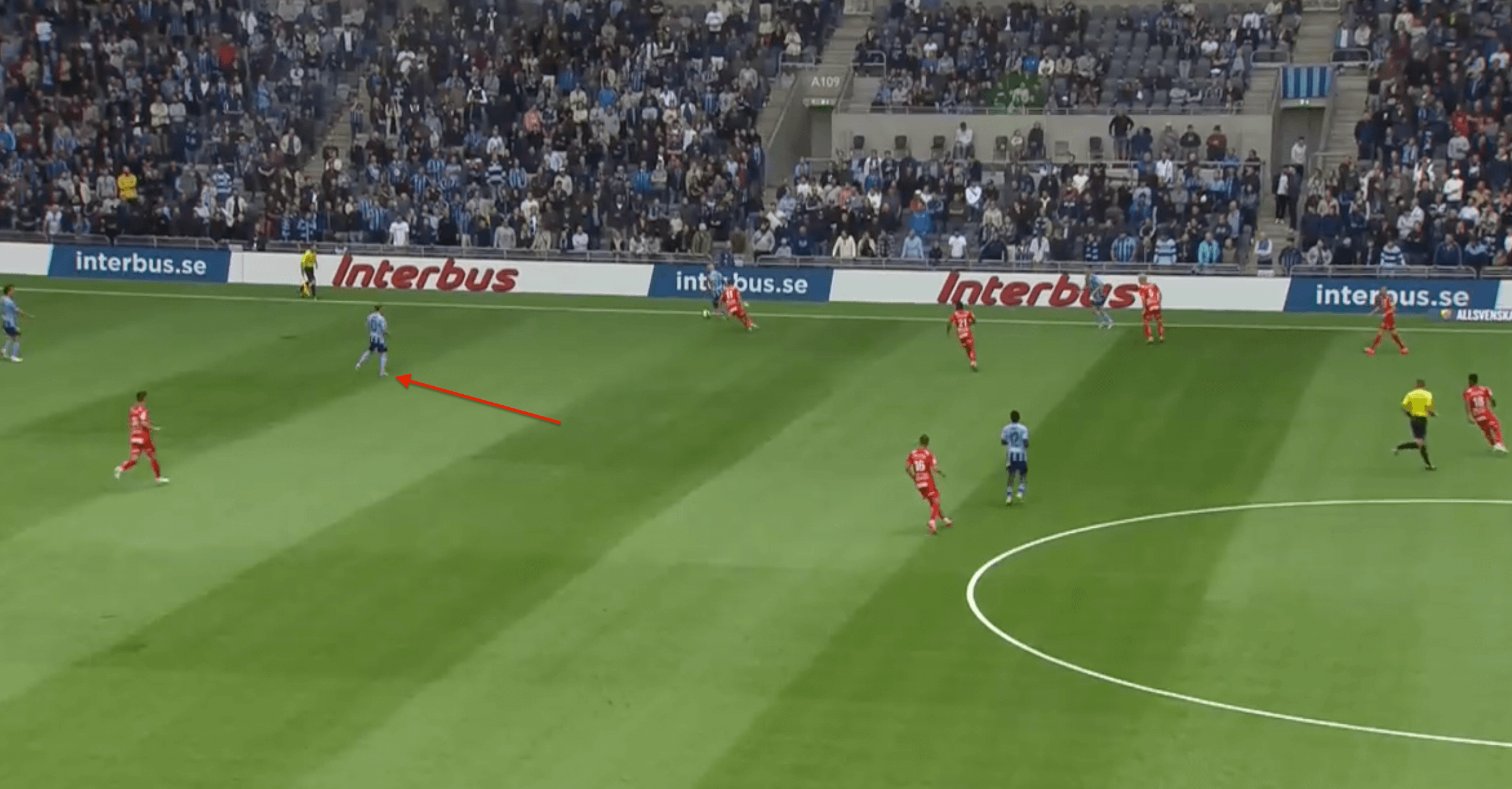 In the above example, we can see him moving from an initial position to drop a little bit back, as indicated by the arrow in order to give a passing option for one of the full-backs on that side. This means that he has escaped the passing angle which was cut down by the cover shadow of the player who is pressing the left-back and he is now able to receive it freely.

Generally, he looks to drop deep, but with most teams pressing with a lone forward, Djurgarden basically build up with two centre-backs and he acts as the pivot in front of the CBs. Mostly when the opposition looks to mark him with one of their players, he is pretty good at manipulating the opposition by constantly moving around to drag the player and create spaces or open passing lanes for his CBs to progress the ball.

Sometimes he also moves laterally forward when he realises that two of his midfield partners in the 4-3-3 system are staying back. Djurgarden uses this approach quite a bit to use Finndell’s experience of playing as an advanced midfielder as well, especially last season.

Defensively, Finndell has a decent reading of the game and positions himself quite well in many situations. In this example below we can see him moving to the wide left region to cover the marker and look to cut out the passing lane for that marker from the ball carrier who is also being pressured by his teammate.

He is also pretty good with his ability to get into the box and defend passes and crosses that arrive in the box. We can see an example of that in the image below where he arrives at the box at the right time to defend the cross coming in into the box. 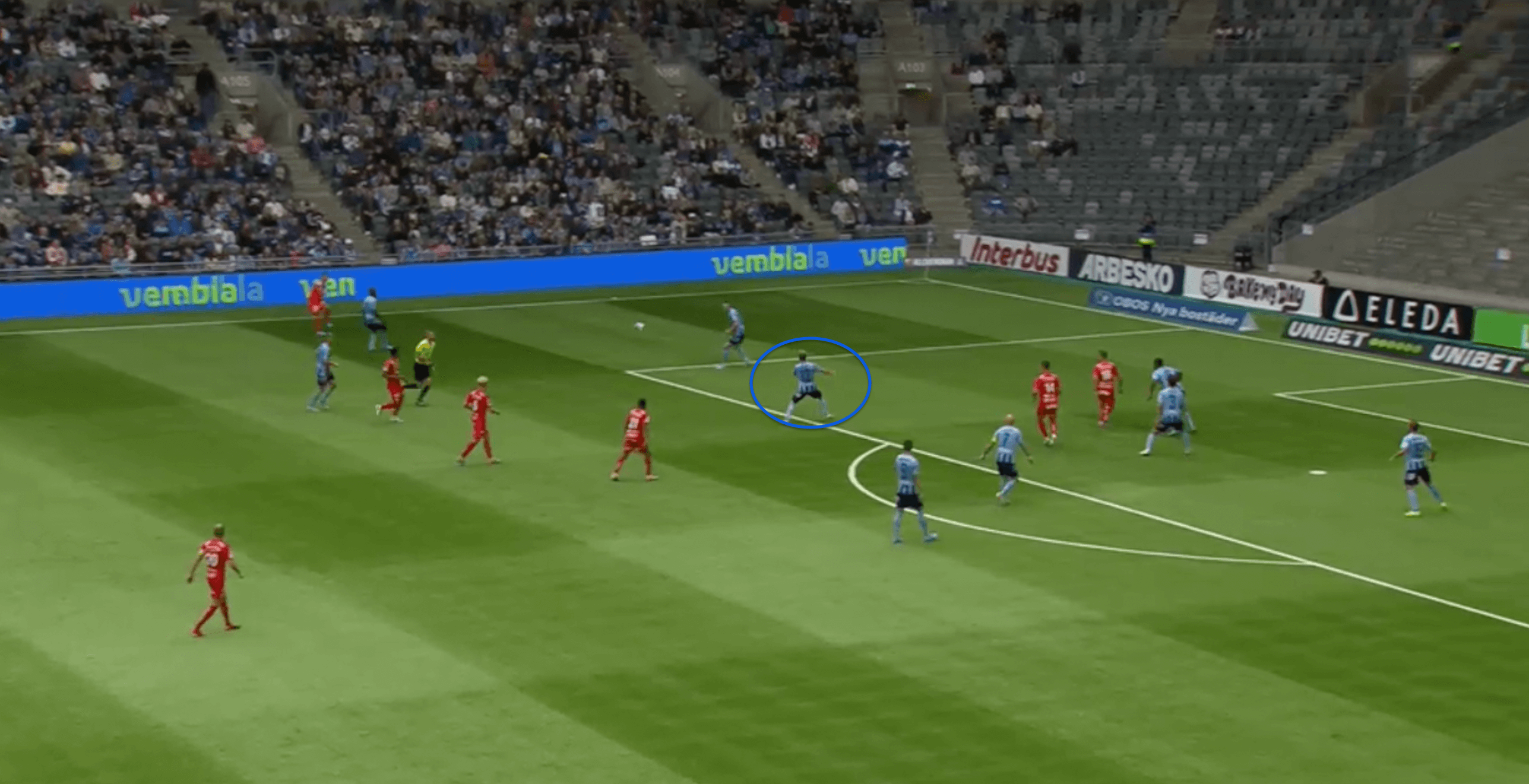 He is also good at giving sudden bursts in pressing over short distances due to his low centre of gravity which allows him to effectively block passes or shots as he closes in on the angle very sooner.

But one issue with him defensively against a settled possession would be dealing with physical challenges. Physically, he is not as strong as you would expect a defensive midfielder would be and he is someone who can be easily bullied by stronger players on the pitch. In the example below we can see him losing the ball to an opposition player when he pressures him and behind and he easily nudges him to dispossess and take the ball away from him. 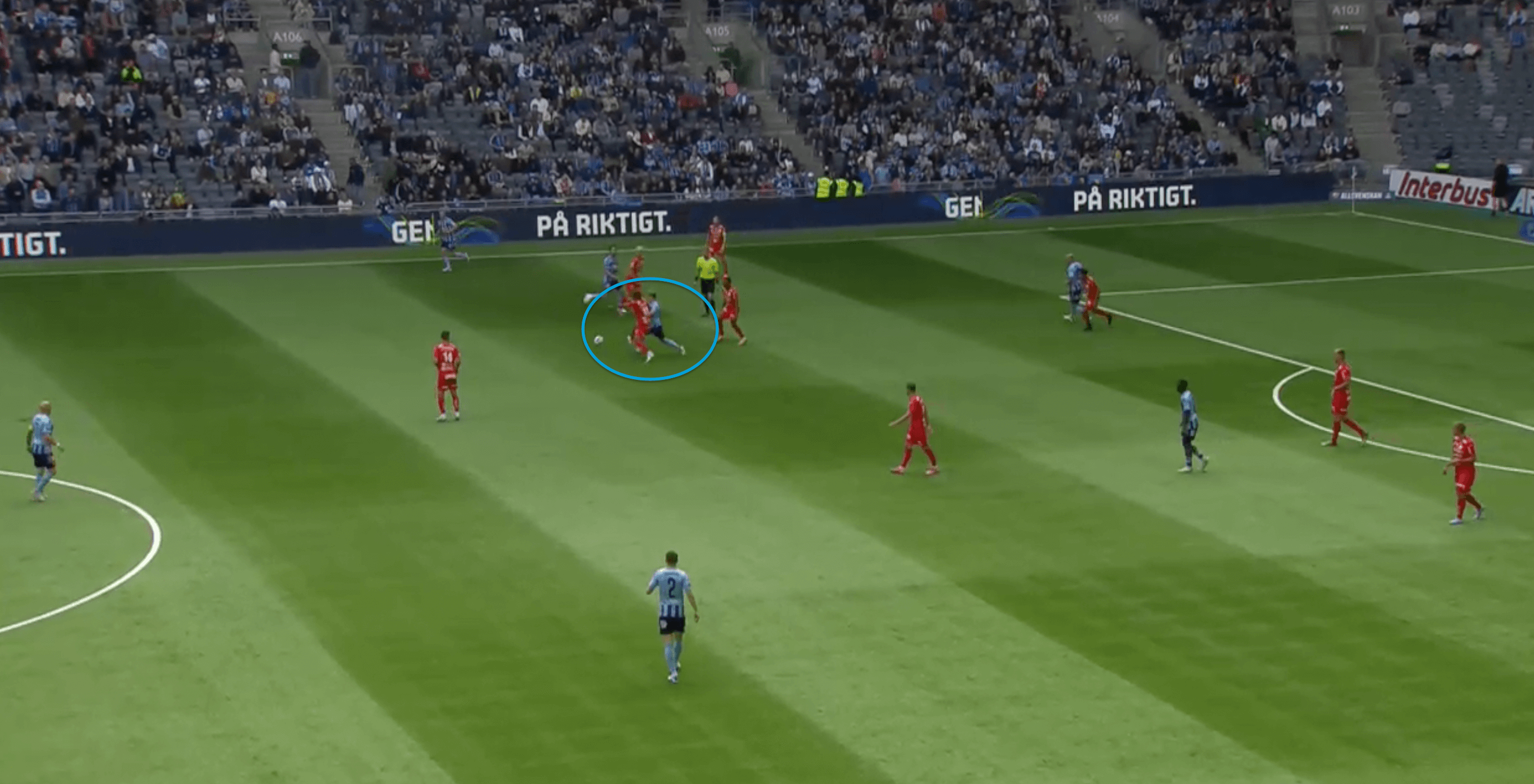 We can see another example below where he struggles to deal with the challenges when he tries to make one and he is easily outmuscled by the opposition player. His physicality is his biggest weakness right now which is also one of the reasons again for some of his limitations when he has the ball like carrying and dribbling, etc.

Also, at times, his decision-making during opposition counter-attacks can be a bit mixed where instead of staying in his position he would unnecessarily vacate it and go on to press when he should not have chosen to do that. The below image is one such example where he does that and he fails to block the passing lane into the centre, a space he vacated, and now an opposition player can easily receive the ball with space ahead of him.

Overall, Hampus Finndell is a talented midfielder who is not yet completely developed but has very good potential to develop into a very top midfielder who can play for teams belonging to the top European clubs like Premier League, Serie A, La Liga, etc. But for that to happen his main focus has to be to develop himself physically by gaining more muscle mass that would aid him to deal with challenges more effectively against strong players as well.