Gianluca Scamacca: A lethal finisher who can give West Ham a new attacking dimension – scout report

Gianluca Scamacca has put pen to paper on a five-year contract at West Ham United, moving from Sassuolo in a deal worth around £35million. The highly rated 23-year-old Italian striker became the fourth player to come through the door at the London Stadium this summer.

Scamacca represents a huge statement signing for the Hammers after two and a half years without having a natural striker in their first-team squad. Michail Antonio has done a tremendous job since being given the number nine role under David Moyes, but he has had fitness issues in recent years due to being overused and has often gone on barren spells in front of goal.

The forward has just undergone his second full season in Serie A, scoring 16 goals in 36 appearances (27 starts) last term, netting double the amount of goals he recorded for Genoa on loan in 2020/21. Since moving to Sassuolo in 2017, Scamacca has been sent out on four loan spells until he broke out with Genoa two seasons ago.

Prior to that, the Italian had a torrid time in the Netherlands with PSV Eindhoven after leaving boyhood club AS Roma as a 16-year-old. Ultimately, his loan move to Ascoli in 2019/20 kickstarted the long-awaited emergence of Scamacca at senior level. 13 goals in just under 2,500 minutes in Italy’s second division was a healthy return for a young striker still learning to manage the jump in physicality from youth to senior level.

“He has everything it takes to become a complete centre-forward,” says Italy manager Roberto Mancini.

After recent struggles in the transfer window in the forward department – with players such as Andy Carroll, Andre Ayew, Javier ‘Chicharito’ Hernandez and Sebastien Haller not fulfilling expectations – West Ham supporters will be hoping that Scamacca can quickly hit the ground running and lead the line at the London Stadium for the foreseeable future.

This tactical analysis and scout report sheds light on Scamacca’s style of play and key attributes. The analysis highlights the reasons that led West Ham to invest in the young striker, how he can adapt to the team’s tactics and how he compares with Michail Antonio.

Playing as a lone striker in either a 4-2-3-1 or 4-3-3 during the 2021/22 campaign, Scamacca has netted an impressive 16 goals in 36 Serie A appearances and ascended into one of the most in-demand center-forwards in Italian football.

The 23-year-old has been likened to Zlatan Ibrahimović in terms of physicality and stature, 195cm tall and weighing 85kg. Nicknamed “Il Bomber”, West Ham’s new number 7 has taken giant strides in his development in recent years and now looks capable of becoming a physically dominant force in the Premier League. Like Zlatan, especially when he was younger, Scamacca is capable of being a nuisance to defenders from anywhere in the final third.

Scamacca has a wide range of passing, he prefers to utilise his passing over carries. In his role, he’s namely a target man that anchors dynamic inverted wingers dropping to collect possession, but he also has the range to switch the play to the flanks. He averages 1.8 progressive passes per 90 compared to 0.78 progressive runs.

Scamacca doesn’t confine himself to specific areas of the pitch, he likes move about, confusing his markers as well as creating space for the likes of Domenico Berardi to exploit the areas he vacates.

Shooting-wise, he ranks in the 84th percentile for total shots taken and in the 93rd percentile for shots on target among forwards in Europe’s top five leagues, averaging 2.94 shots per 90.

His influence and contributions to the build-up are emphasized below. He is positive in possession and has a direct impact on the likelihood of a shooting/scoring opportunity.

Scamacca’s main attributes are his strong aerial presence, solid balance and acceleration, link-up play and deadly finishing ability. His physique also means that he has superb chest control, enabling his team the option to play long balls in his direction, as he can make them stick, lift his head up and then provide lay-offs to supporting players.

The 23-year-old’s hold-up play is a major problem for defenders. He gets his body in between opposition centre-backs and the ball and acts as a target man. He can also serve as the outlet during a dast counterattack. 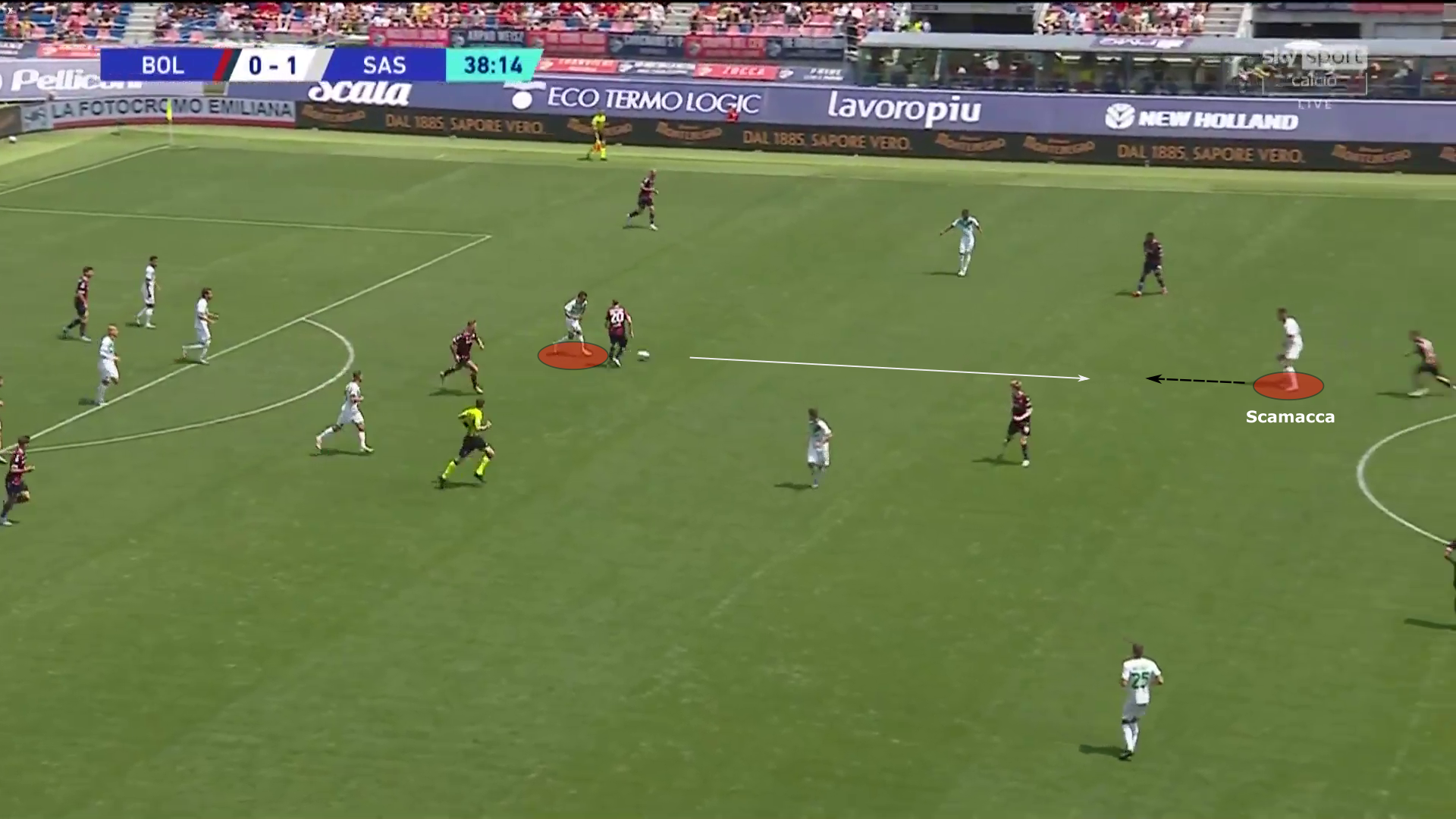 Scamacca drops deep to receive the ball after Sassuolo win back possession. 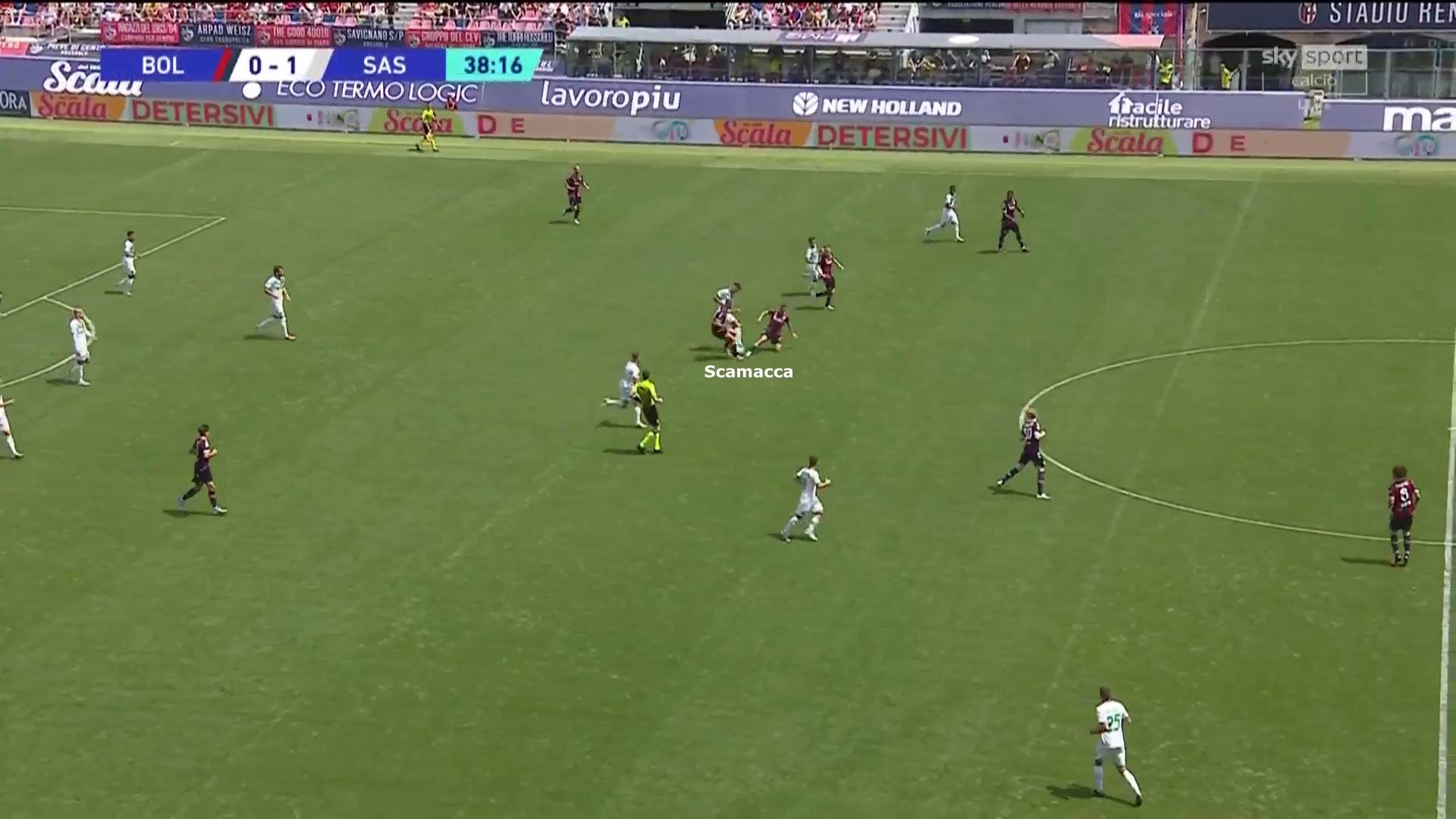 Being put under pressure, he uses his strength and confidence on the ball to bully two defenders while maintaining his balance, causing the opposition players to collide with each other. 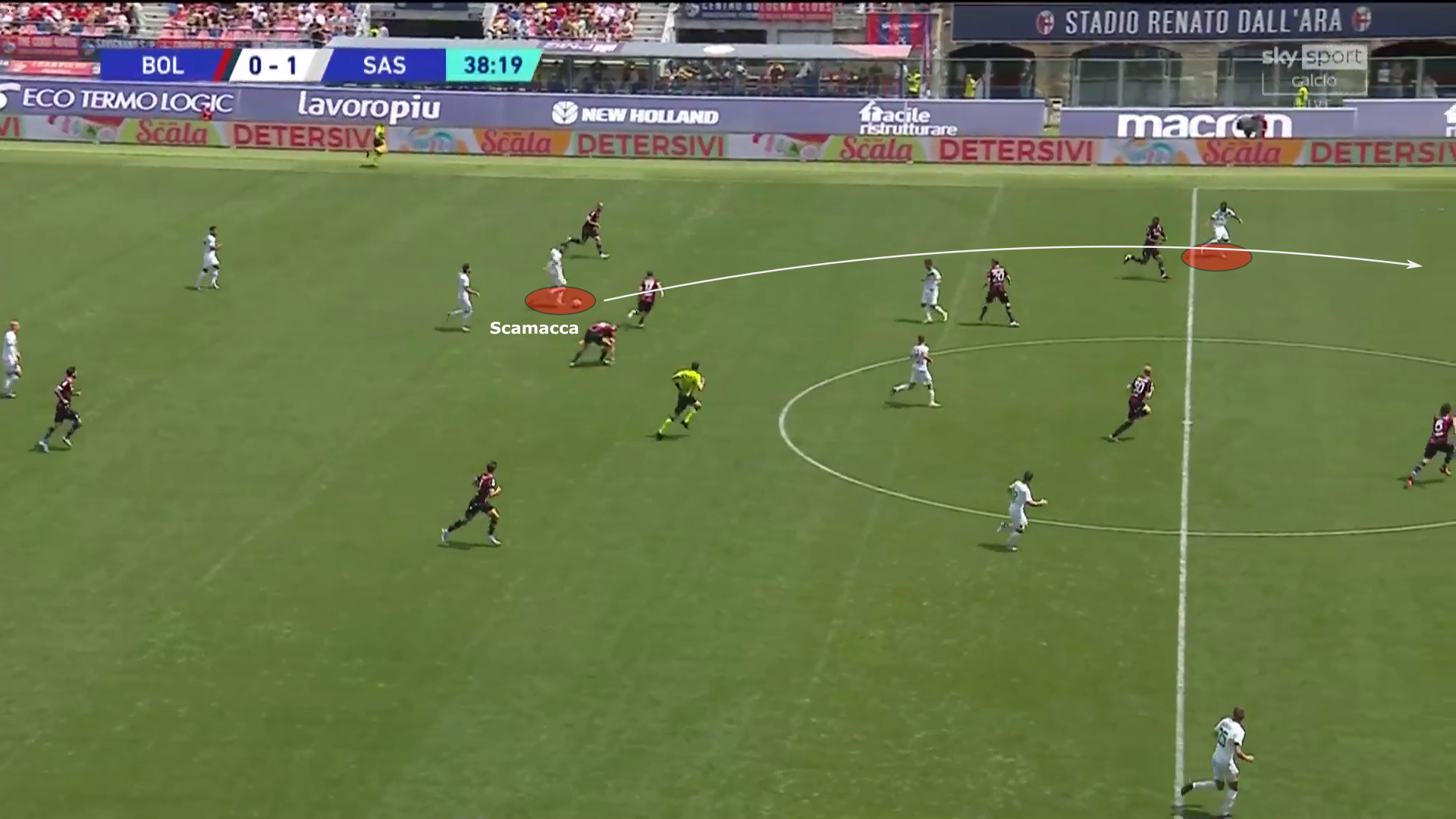 Scamacca immediately scans the pitch for options to exploit the disorganization in the defence and supplies an outside of the foot through ball to the left wing. 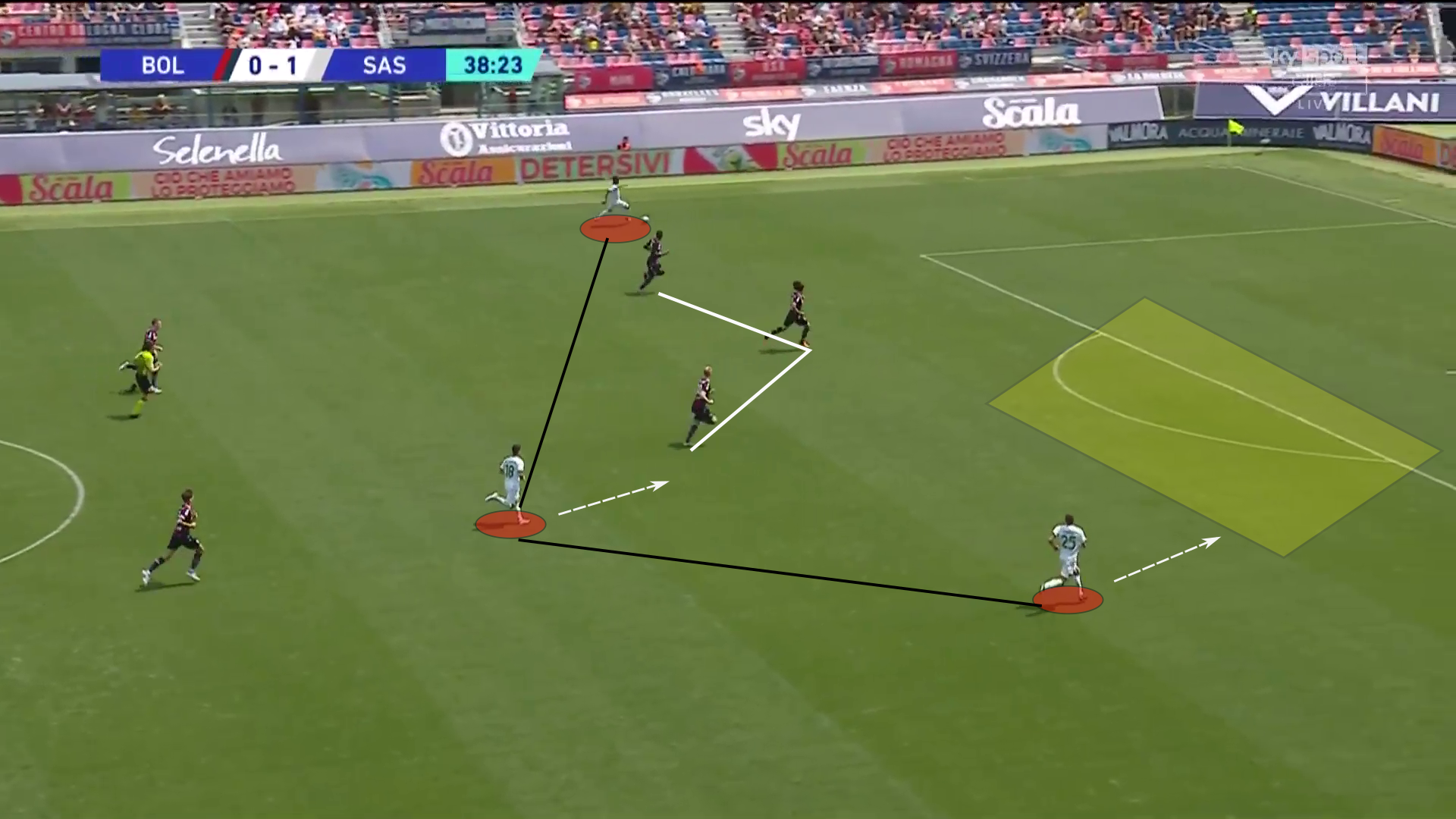 The move leads to a 3v3 situation with Berardi in acres of space at the far post.

A player with Scamacca’s size and height is obviously useful in set-pieces, both attacking and defensive. On the attack, he is very difficult to mark as he is physically strong and has smart movements in the box, in addition to his powerful and deadly heading ability. On the other end, he is utilized to cover the near post, hold his space and clear the ball away.

Scamacca’s movement in the box is deadly and his headed goal vs Salernitana is a perfect example of how he creates space for himself. 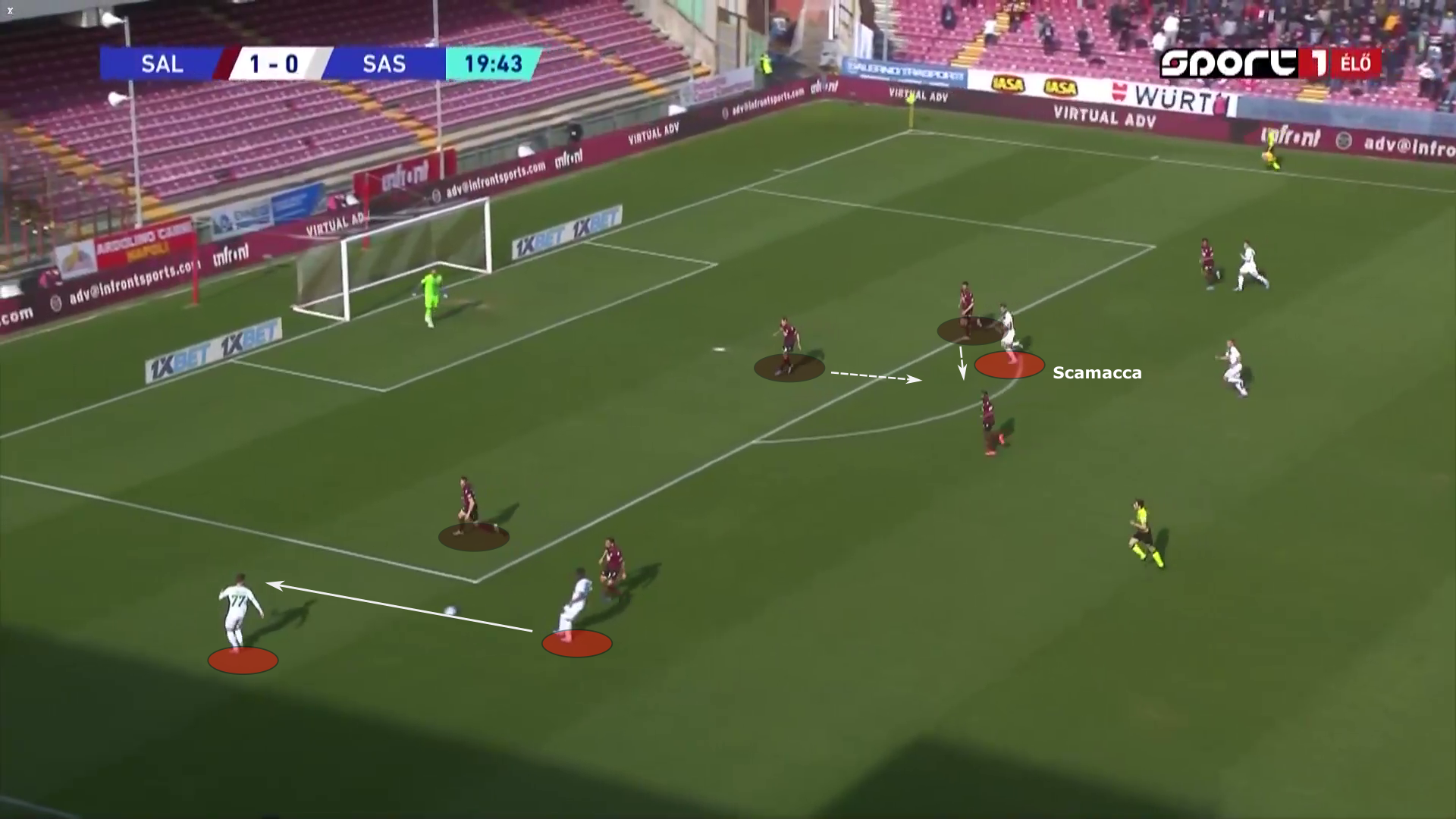 He positions himself between the two centre-backs as the play develops in the left channel. 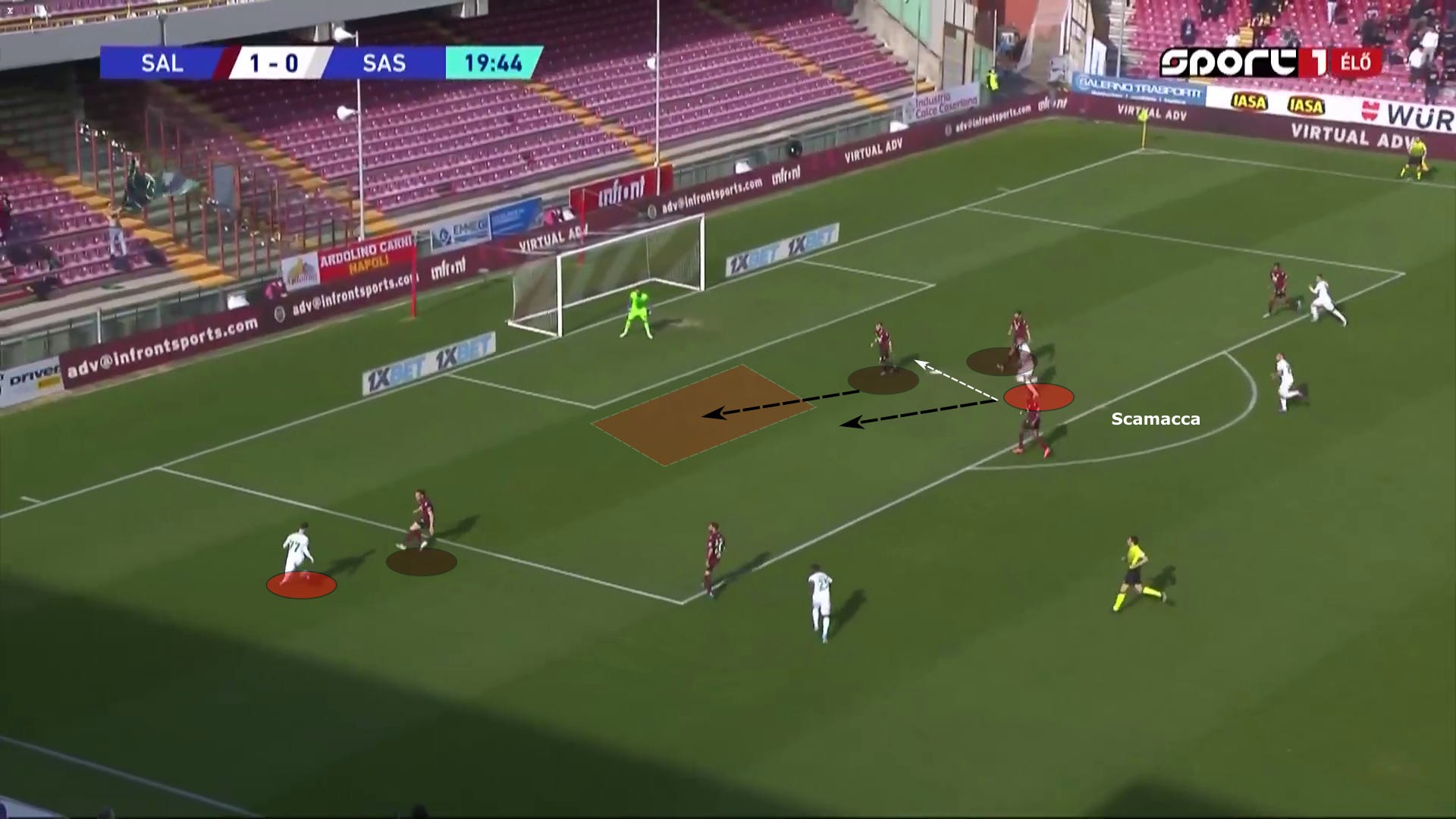 Scamacca directs his run towards the near post and drags the right-sided defender with him before swiftly shifting his run into the centre. 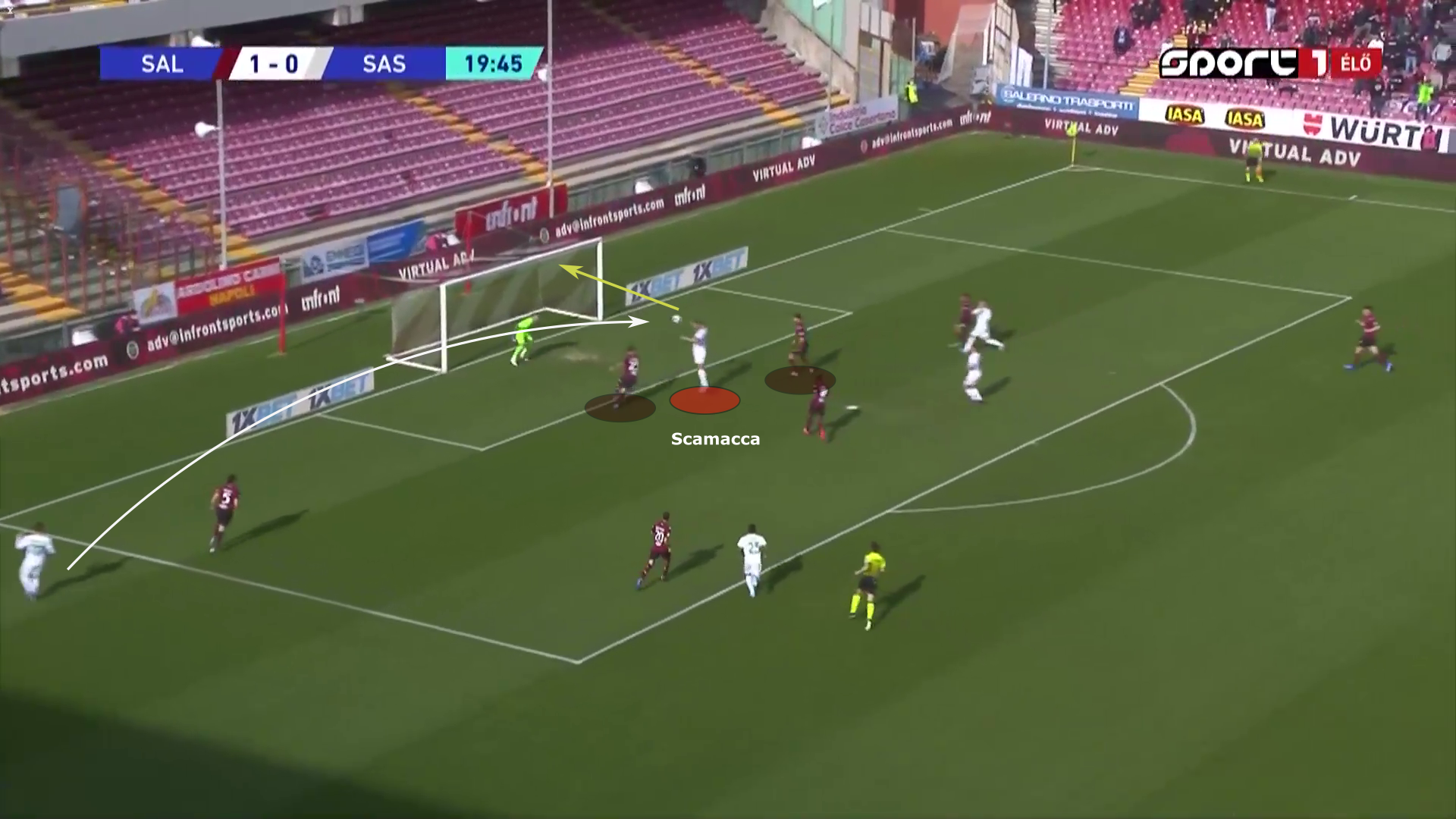 Scamacca anticipates the cross and judges the flight of the delivery to place a towering header past the keeper.

Scamacca has the ability to hit the target consistently & score in multiple ways making him a constant danger. Six of his goals have come from long range or via his head which highlights his versatility.

To complement his range of aerial abilities, the 23-year-old is a superb ball striker. He releases his shots quickly, rarely requiring many touches of the ball to control it and create an optimal shooting angle. 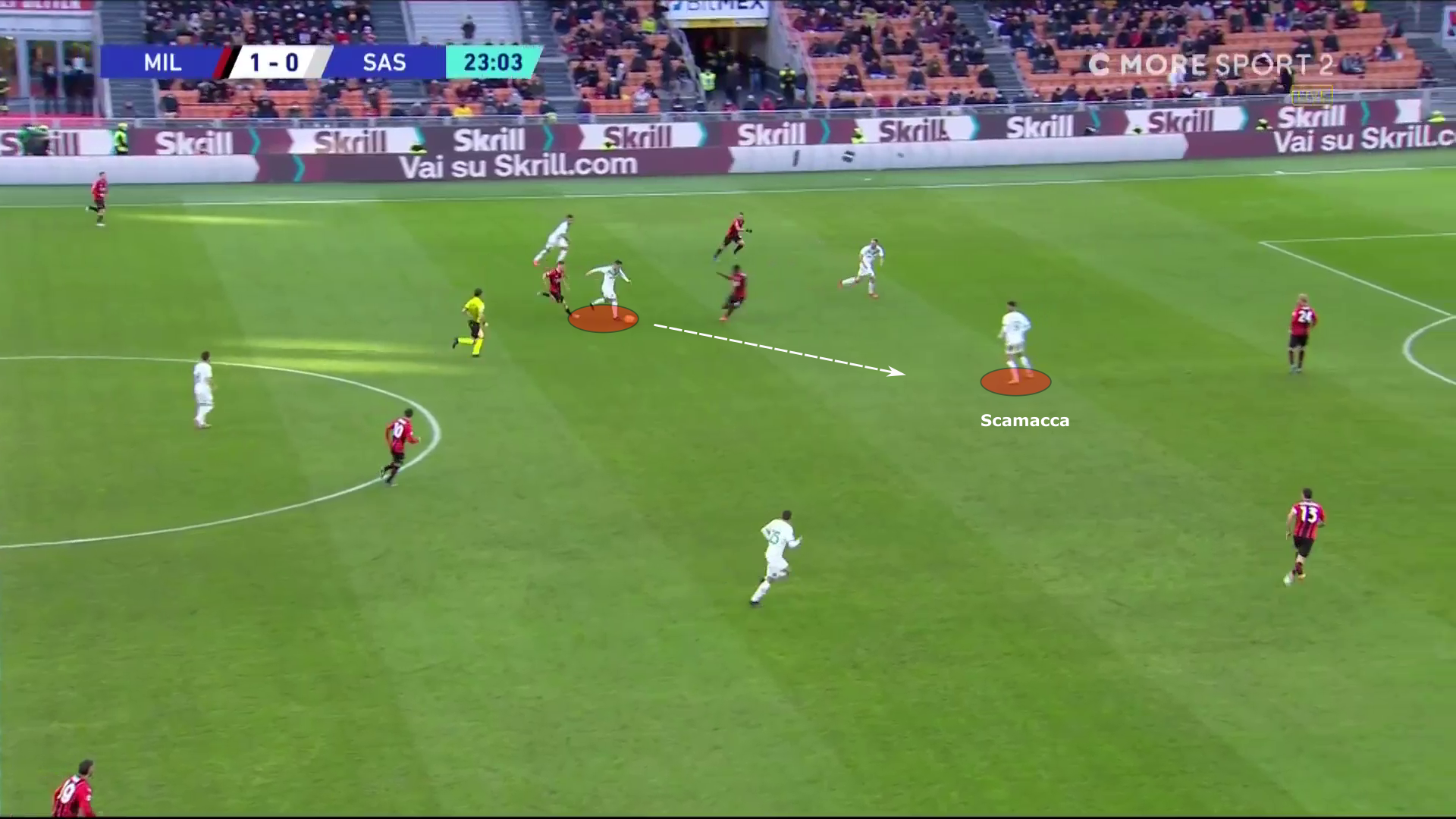 His thunderbolt against Milan was one of the goals of the season, with Maignan rooted to his spot. 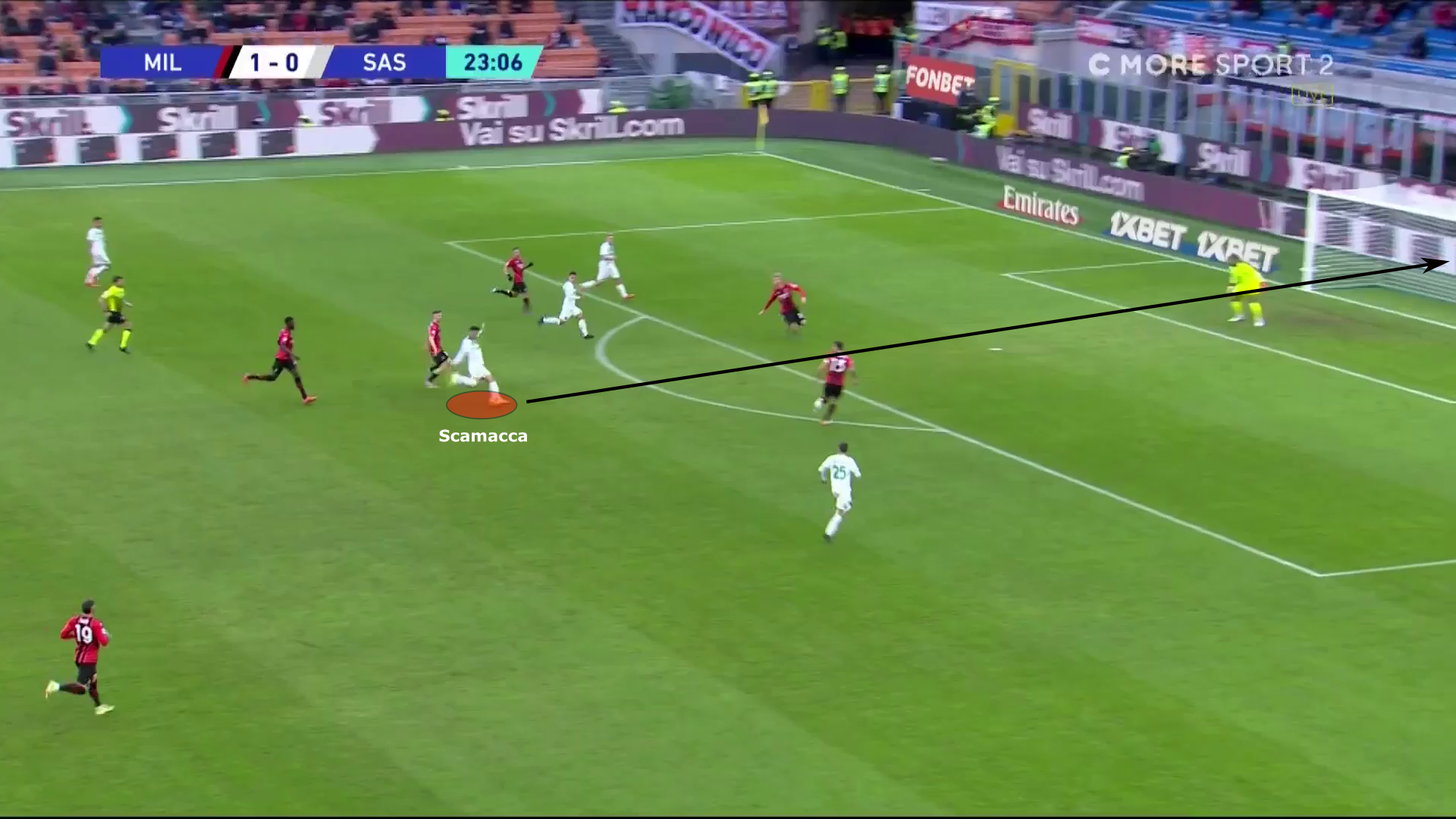 Despite his goals from long range, Scamacca’s decision-making as to when to shoot needs some improvement as he tends to shoot from low % conversion spots and takes some rushed attempts without concentration.

He is sometimes subject to inconsistent hold-up play, losing his footing or giving stray cut-backs with his back to goal. 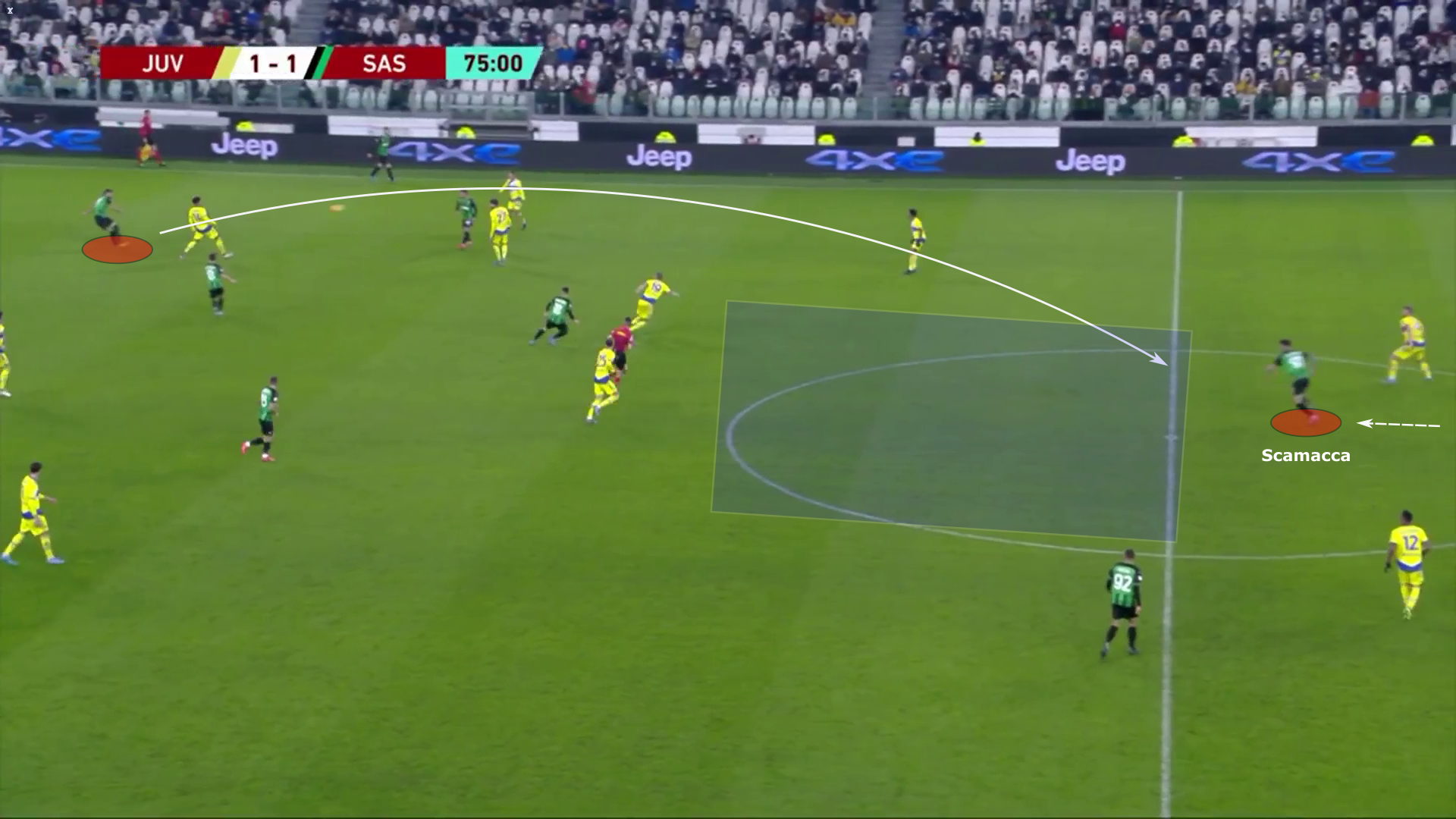 The centre-back plays a ball towards the middle of the pitch into Scamacca’s feet as the striker drops to receive. 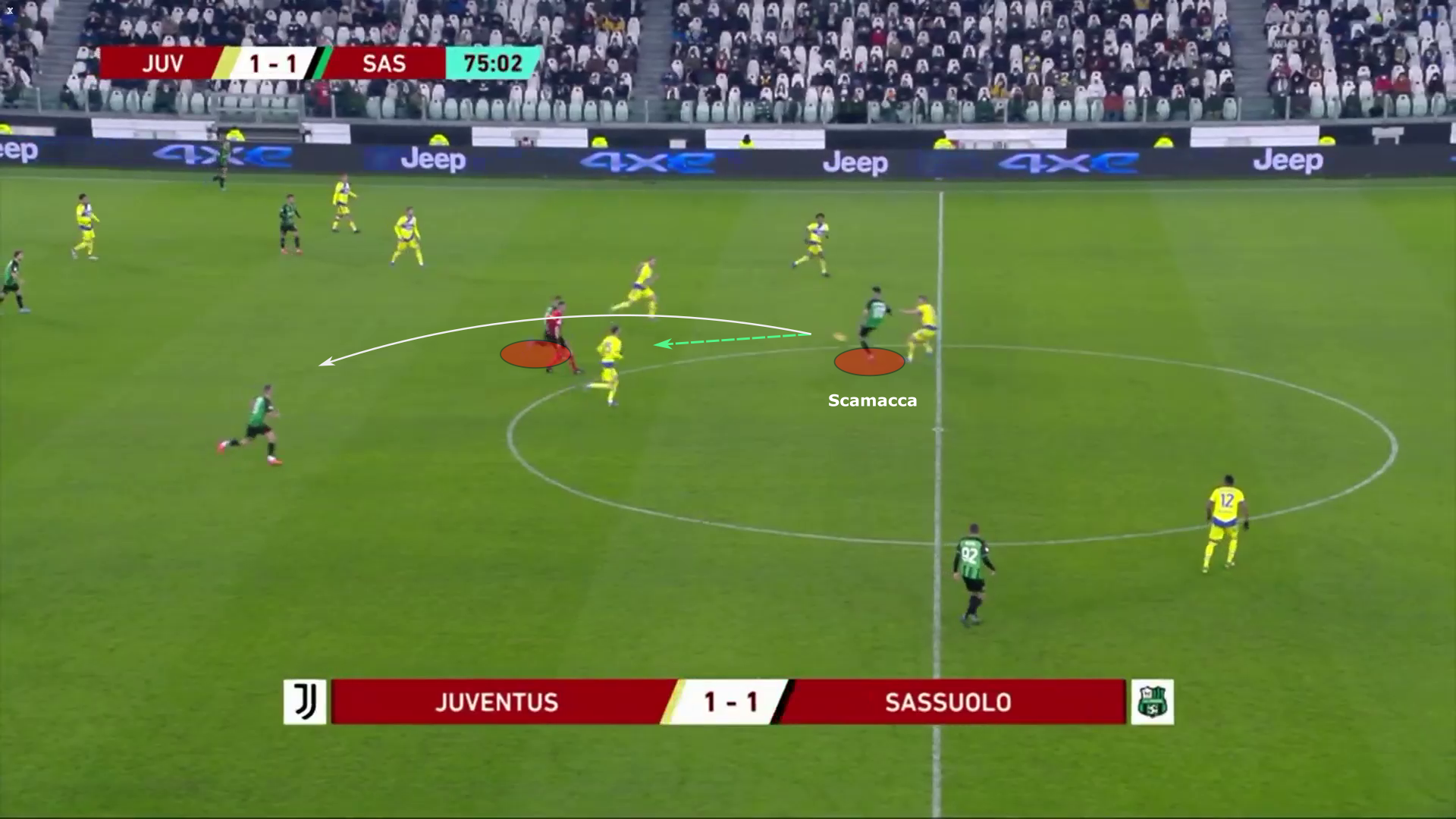 Attempting to play a simple lay-off (green arrow), he miscalculates the bounce of the ball and instead hits a heavy pass which reaches a Juventus player and puts the team under pressure. 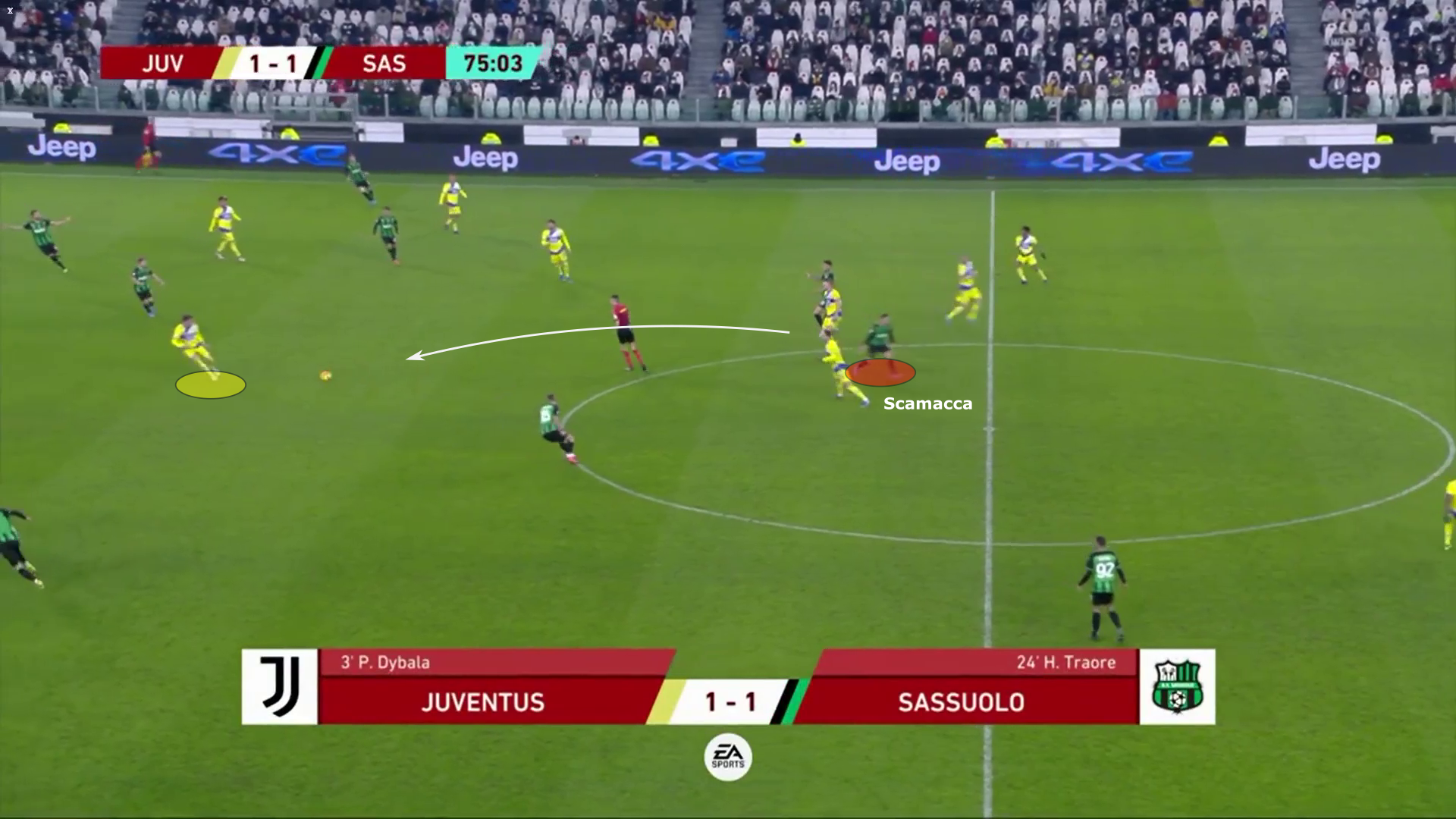 As ever in the modern game, attackers are now expected to do a lot more than just attack. They are also expected to do some of the dirty work going towards their own goal too, or even pressing their opponents to stop them from allowing ball progression into dangerous areas.

Scamacca’s defensive contribution is limited and below the median among forwards. He averages 3.37 defensive duels, 1.84 interceptions, and 1.22 Padj interceptions per 90.

This isn’t necessarily an indication of a poor defensive attitude but merely due to the tactical approach of Sassuolo.

Overall, the striker is not reluctant to commit defensively and pressurize the opposition when the opportunity presents itself. However, he does have an aggressive style and is highlighted by his 1.66 fouls per 90. 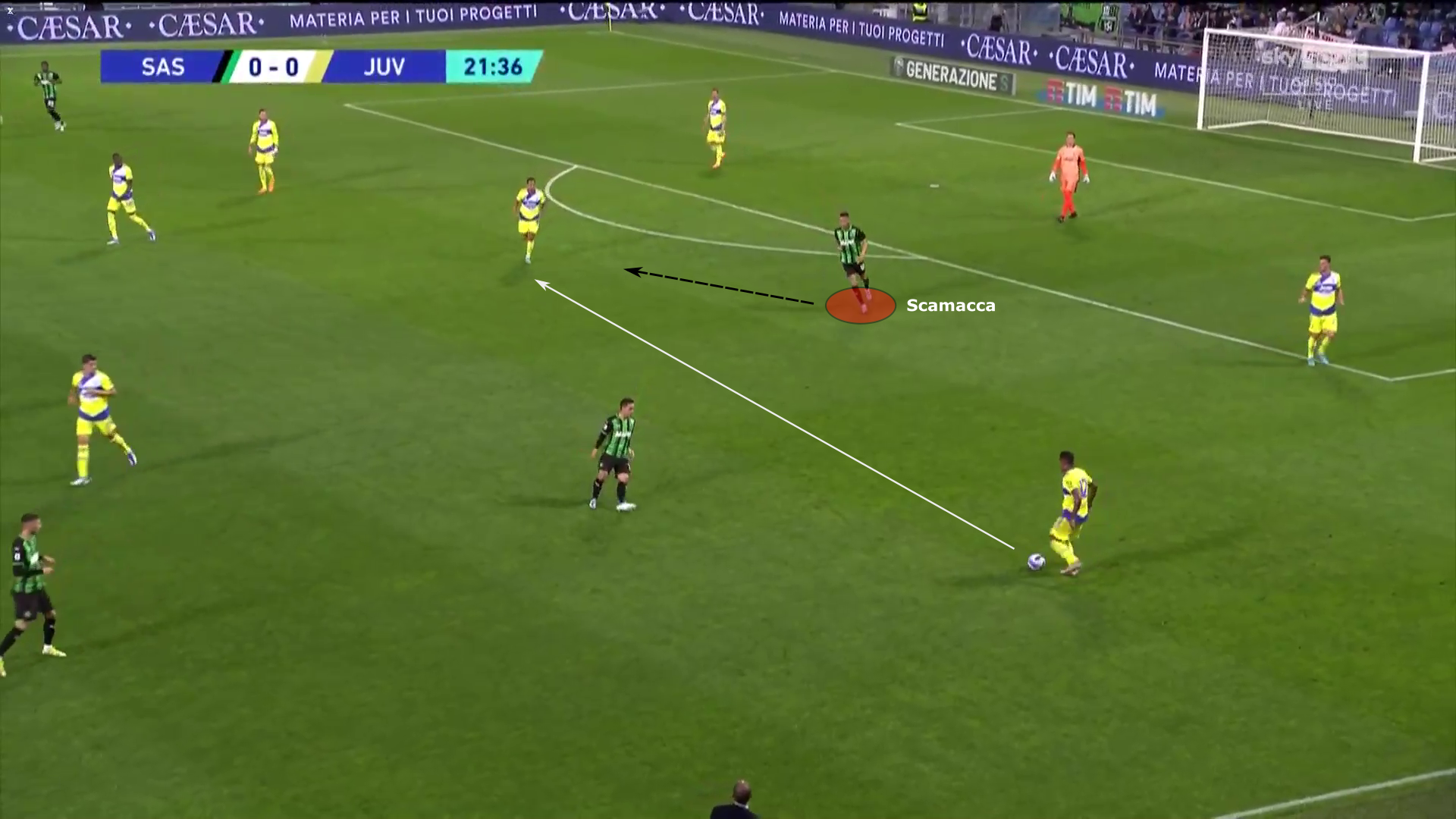 As the pass is played towards the middle, Scamacca quickly chases down the player with the ball but ends up committing a foul. 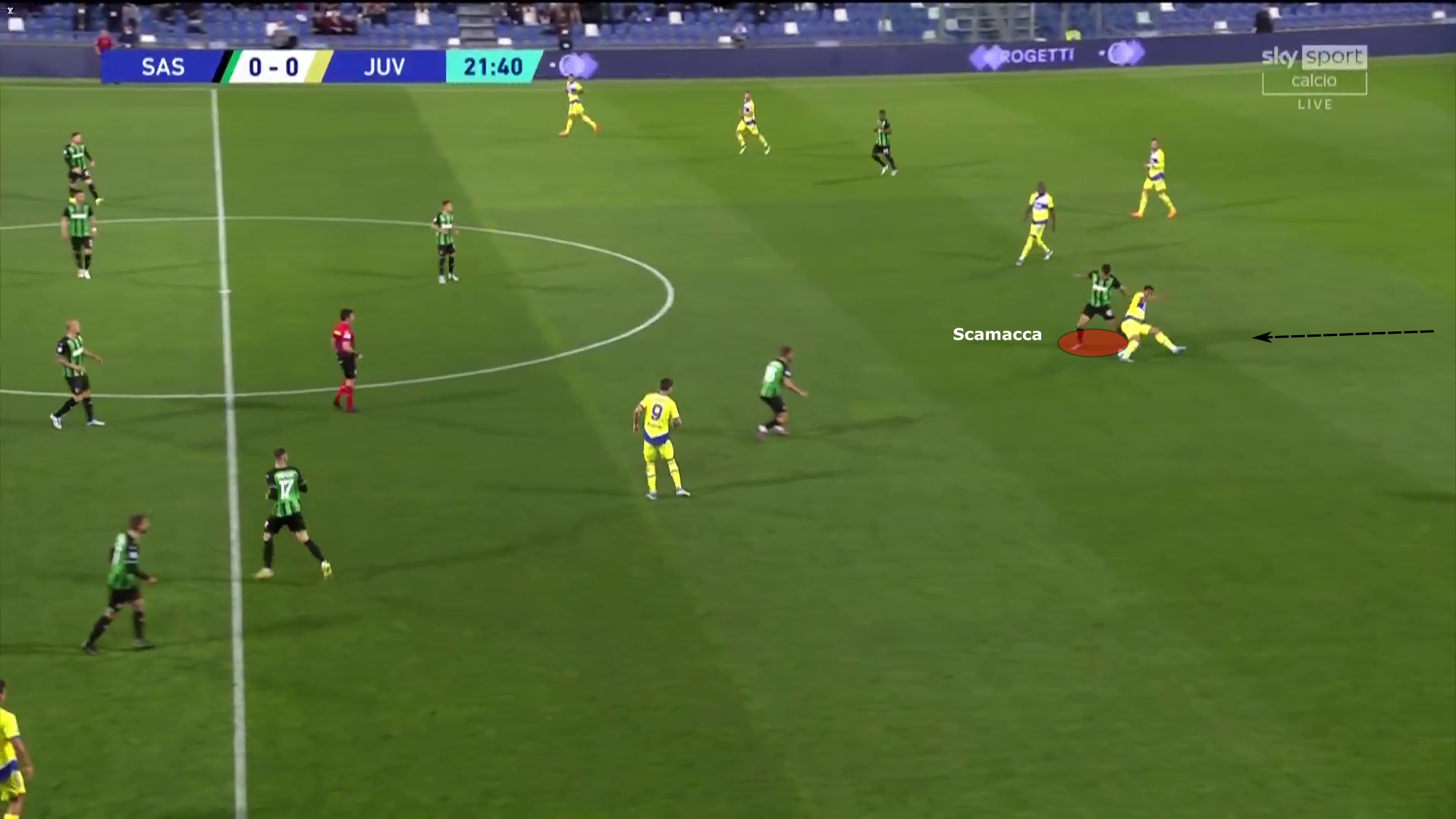 A major area that Scamacca needs to work on in the coming seasons at West Ham is creating chances and assisting. He didn’t record a single assist in Serie A last season (16 goals, 0 assists) and is below average for metrics such as progressive carries, carries into the penalty area, shot-creating actions, and progressive passes among forwards in Europe’s top five leagues. He is not currently the type of forward who creates chances for his teammates.

On another note, none of his goals during last season were scored with his left foot – another dimension of his game which needs improvement so he does not become dubbed as predictable and one-footed.

Despite qualifying for Europe for the second consecutive season, West Ham suffered from a lack of squad depth. Michail Antonio was the club’s only senior striker and, even though he performed admirably, the Hammers were often predictable in their play.

Antonio has done incredibly well for 18 months as the club’s only senior striker and played 47 games in all comps (3,912 minutes) last season – double what he was able to play in 2019/20 and 2020/21 combined. A strong indicator of the need for a new striker to arrive at the club. 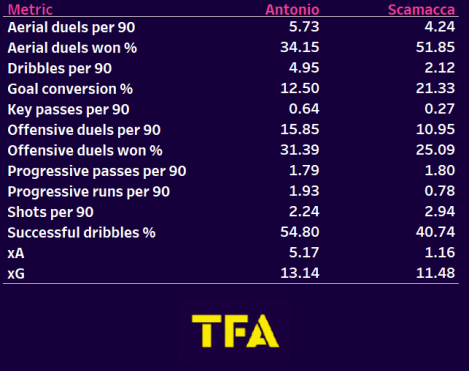 Antonio edges Scamacca in offensive duels, dribbles and key passes per 90, as well as having a higher xG – 13.14 to 11.48. The Jamaican international is more involved in the build-up as can be seen in the heat map. Antonio, previously a right-back and winger, likes to drift into wider areas and participate more in the creative areas of the pitch.

Antonio’s 8 league assists compared to Scamacca’s 0 showcases the different types of players the two strikers are.

Scamacca’s heat map demonstrates his profile as a target man and traditional no.9. He primarily holds the central space on the pitch & looks to consistently provide support on the right side where he can receive into his stronger foot before linking or progressing with carries.

Scamacca’s conversion rate is amongst the best in Europe’s top five leagues, ranked in the 84th percentile and higher than Antonio’s by about 8%.

This is exactly what David Moyes wanted to add to his West Ham side to give them another attacking dimension and a different route to scoring. Some suggest that the pair can even play together at certain times during the season if West Ham adopt a back-three system.

Scamacca is still an unpolished forward. He is prone to giving the ball away and can sometimes go through periods within games and across a season where he fails to influence matches as much as he could. He is still considered a raw talent but possesses immense potential to develop into a top-tier Premier League striker.

With the club’s involvement in Europe again this season in the form of the UEFA Europa Conference League, some of the burden will be lifted off Antonio’s shoulders and shared with his new teammate.

It will be interesting to witness how Scamacca adapts to the Premier League and to the Hammers’ style of play and how well he can connect with the team’s creative forces such as Pablo Fornals and Jarrod Bowen.