Esther González is a Spanish international player who is actually playing at Real Madrid Women and who has been outstanding during the last period and especially during and following the 2022 Euros. González is a 30-year-old player who started her professional footballing career at Algaidas before moving to Levante, Atlético Málaga, Sporting de Huelva, Atlético de Madrid and finally joining Real Madrid in 2021.

In this tactical analysis, in the form of a scout report, we will mainly be studying González’s excellent run of form by exploring her key abilities, her positions and roles at Real Madrid and Spain, as well as what makes her a special player for her team’s tactics and why she has been considered among the best players in the world recently.

González is mainly a striker who can play in numerous formations such as the 4-2-3-1, the 4-3-3 and the 4-4-2 beside a second striker. And at the same time, she is a player who can adapt to different plans and playing styles as her characteristics allow her to be useful in whichever way she is used. But what is certain is that she can give her best and help her team more when she plays in an advanced position and precisely when being used as a striker.

It is true that she played as a left and right attacking player yet she wasn’t able to be as lethal as when she played as a striker. Her finishing/goalscoring skills and physical abilities which include pace, endurance and strength, represent the key elements of González’s profile and make it more logical for her head coaches to play her as a striker most of the time.

During this past season and especially during this actual season, González has been at her peak performances and she confirmed this great run of form with her Euro 2022 performances and goals before continuing her excellent showings in the Primera División and in the UEFA Women’s Champions League with Real Madrid.

The following pizza map just highlights González’s strengths and weaknesses and shows that she is a very valuable player from a defensive perspective as well since she wins a huge number of defensive duels per match, which explains that González interprets all of her roles on the pitch with the same level of concentration and perhaps with more efficiency since she relies on her physical strength to win these duels, in addition to anticipating the direct opponent’s movements and decisions.

From an attacking perspective, González is actually a very good performer on the pitch. She is characterised by some excellent playmaking skills despite being a striker. Her passing accuracy is very high and she is not a player who avoids passing and focuses only on goalscoring. On the contrary, she passes a lot per match as the pizza map shows and she provides the necessary amount of accuracy as well even when it comes to passes towards the final third or to the box.

More importantly, González’s goal contribution rates are very high compared to her expected goal contributions and this means that she is dangerous and efficient both in terms of finishing and key passing. Shooting a lot on goal helps her be constantly dangerous as it makes defenders’ tasks more complicated. 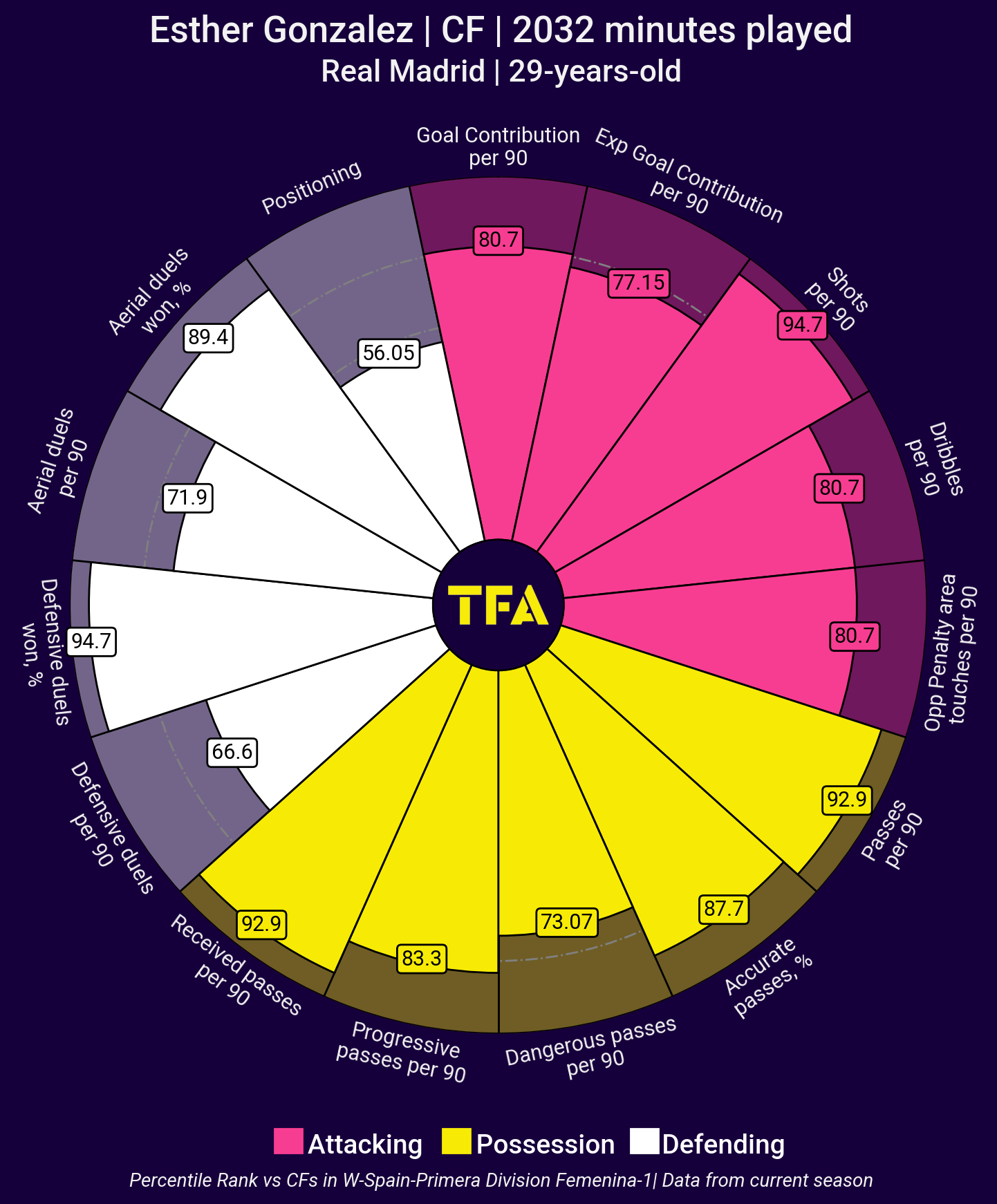 González scored numerous goals this season and is actually one of the best goalscorers in the Spanish Primera División. She is able to score goals in different ways when inside the box and even from outside the box. And what is special about her is that she finds no problems in finishing with her right or left foot, without lacking accuracy or power. The following example highlights her ability to adapt to difficult situations inside the box and more importantly, it shows that she can always score goals with a first-time shot.

This consciousness about her surroundings and the efficiency of execution help her a lot in scoring many goals per season despite being closely marked most of the time. In this action against the USWNT, she received a cross from the right wing and was able to put the perfect impact on the ball before it hits the ground. Being able to use both feet with proficiency was key in this situation because it helped her in chipping the ball over the goalkeeper using her left foot. 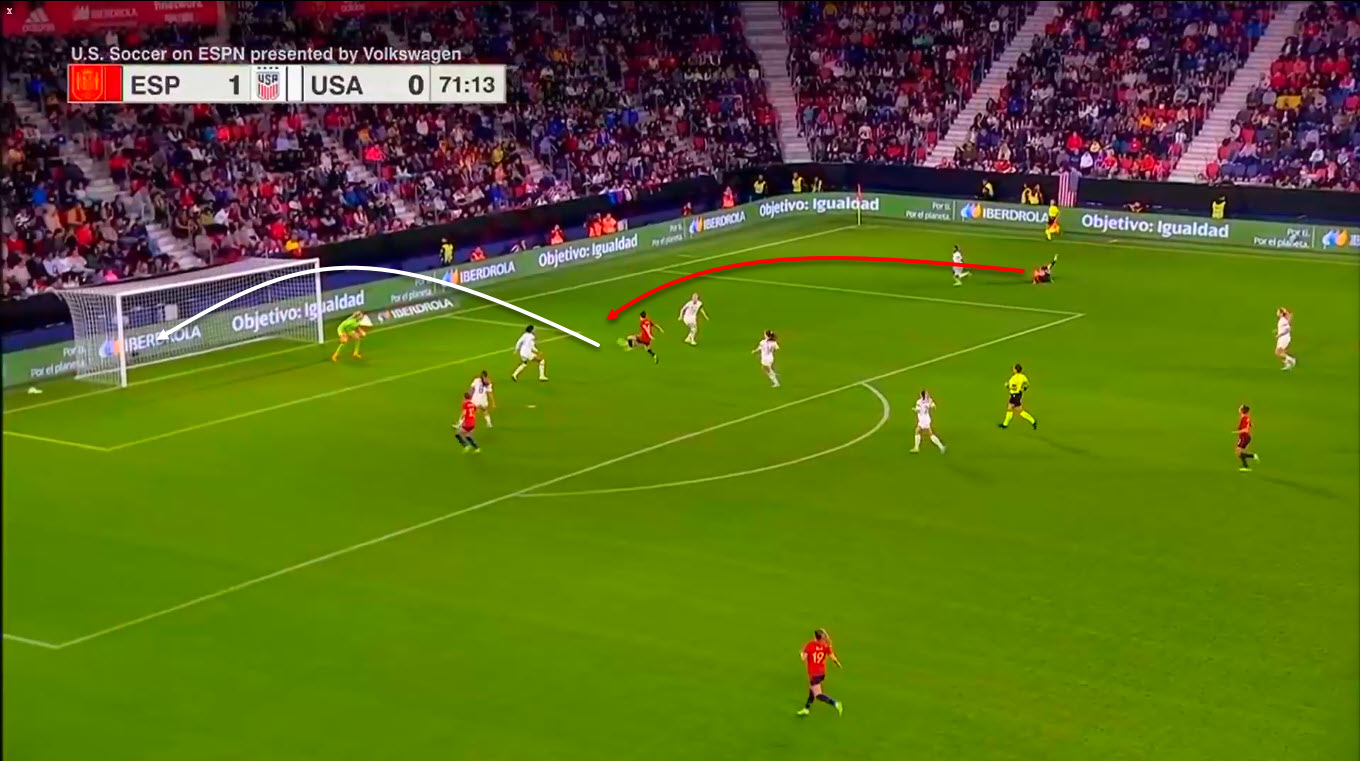 In addition to being excellent in the air, González is also very useful in terms of pressing. She usually leads the pressing line since she is the top-positioned player and uses her physical abilities to disturb defenders and goalkeepers. The result of this pressing is often perceivable since she has already managed to score goals and contribute to scoring goals thanks to her pressing efforts.

The following example just shows how González never fears doing more pressing to intercept a pass even if this can be risky at times. She didn’t hesitate when making a sliding tackle in order to intercept a backward pass towards the goalkeeper despite seeing that the goalkeeper was doing a sliding tackle as well. And in the end, she succeeded in making an impact on the ball which resulted in a goal. 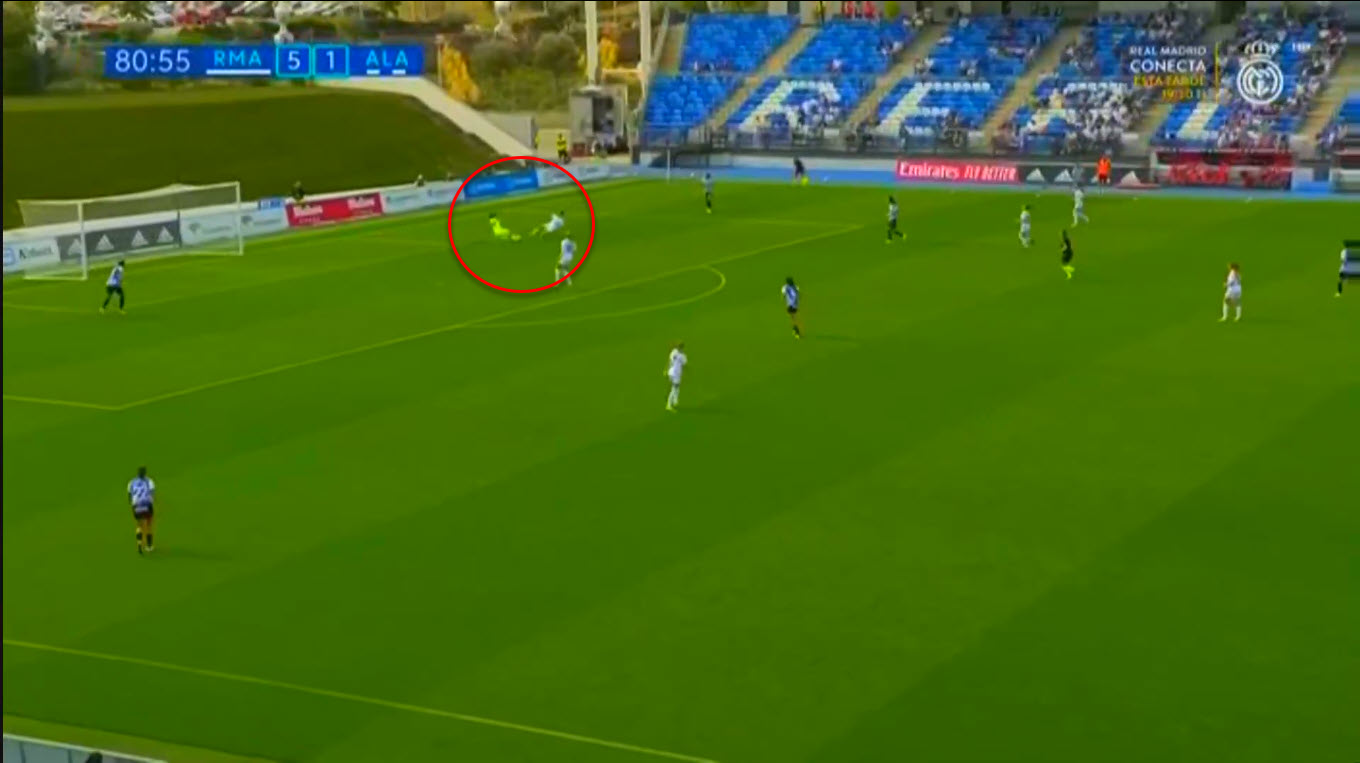 González can also be very dangerous with the ball at her feet. She can play well with her back towards goal in order to receive passes and act like a stationary player. Nevertheless, she can be extremely dangerous when given a little bit of space. She uses her agility and strength to pass defenders using feints most of the time.

So in this action, she received a pass with her back towards the goal, and she immediately feinted her direct marker who was behind her and decided to accelerate towards the box while resisting the disturbance of the two other defenders who were trying to chase her, which explains the player’s physical strength and ability to win attacking duels. 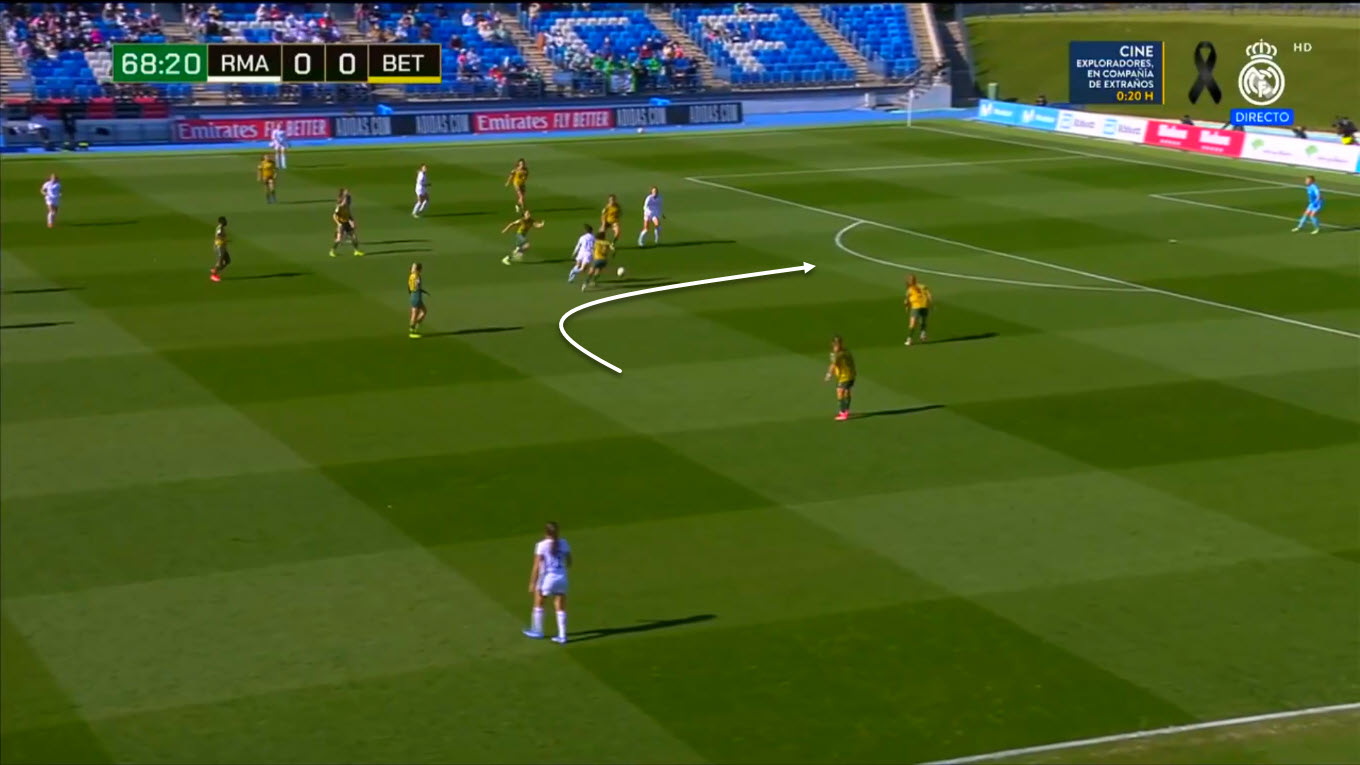 Concerning playmaking, González is actually one of the main providers of passes at Real Madrid and what is striking about her is that she is not really a selfish striker who only focuses on scoring goals. González has got the sense of teamplay in her and usually looks for better-positioned players when receiving the ball inside the final third.

She was fundamental in this regard during Real Madrid’s UEFA Women’s Champions League journey as she contributed to scoring one of the most crucial goals against Manchester City in the first round’s “League Path” final in order to be able to qualify for the group stage. She was the one providing the assist to Caroline Weir using her left foot from the right wing while acting like a right-winger, and such movements towards the right and the left-wing help the team a lot in switching roles and not giving references to opposing defences. 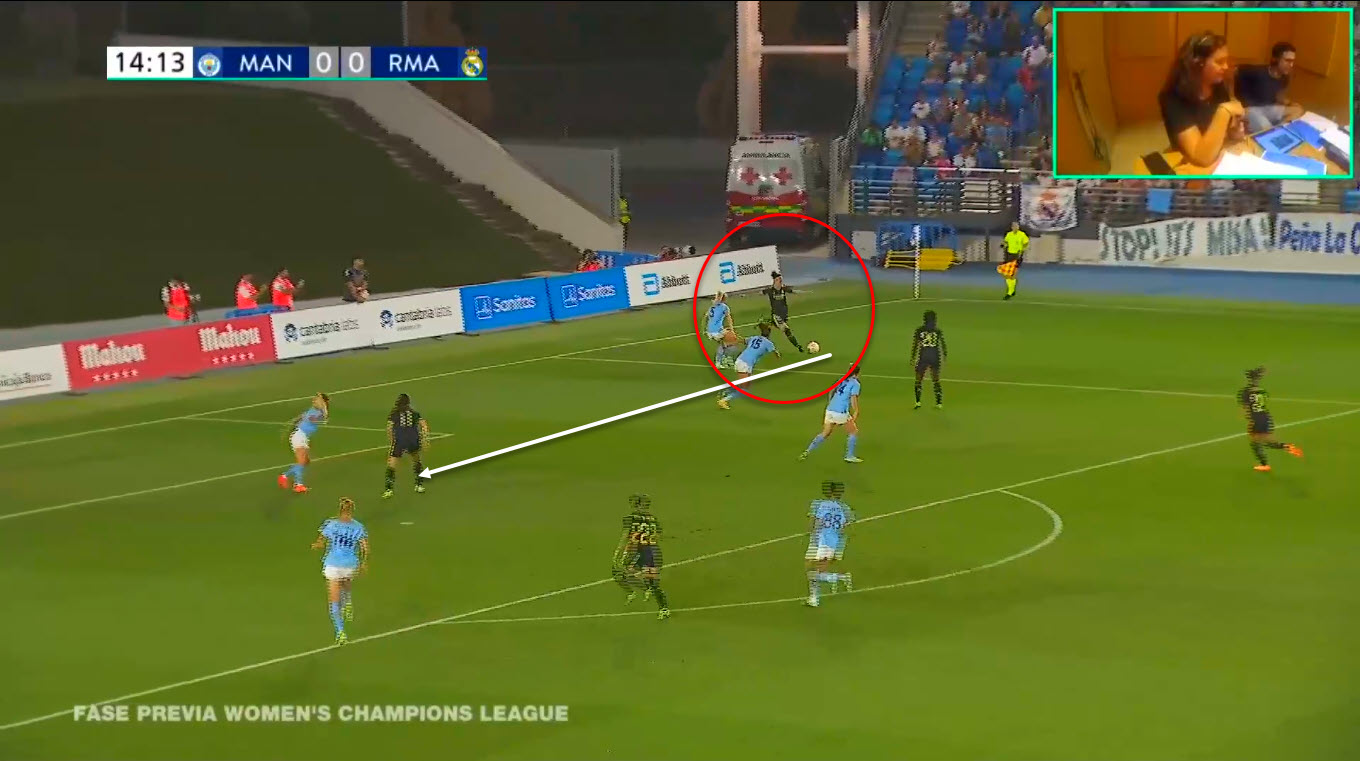 Another assist example that highlights González’s unselfishness and ability to read the game well occurred when facing Alhama. González advanced with the ball on the right wing and when she entered inside the box with a defender in front of her, she saw two teammates who were better positioned and unmarked as well and decided to provide an accurate assist in their direction. Such penetrations on the wings add a lot of value to González’s performances as it helps the team alternate their attacking solutions. 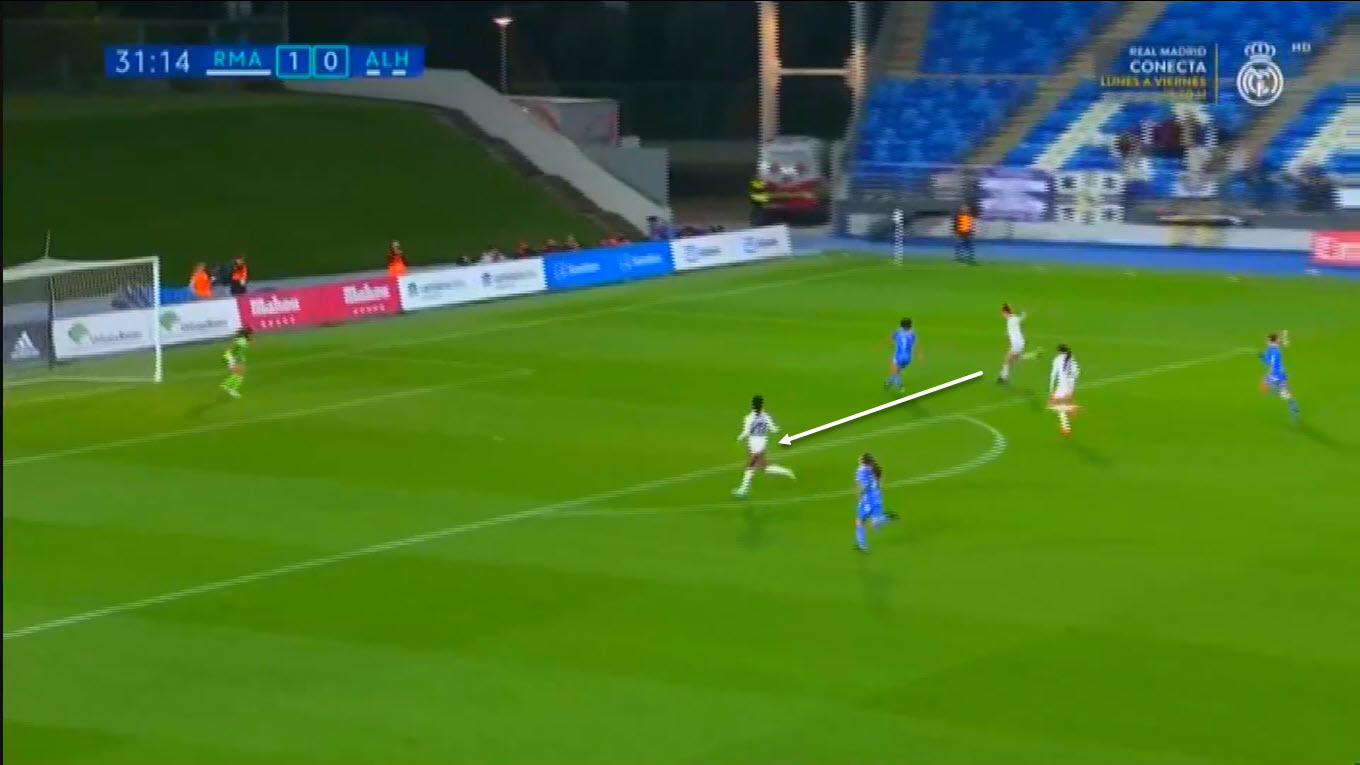 Esther González is a very complete attacking player who finds no problems in playing on both wings even when knowing that she is naturally a striker. In fact, she is an outstanding finisher and she has proved her worth clearly during this season and will most probably continue to shine throughout the season and especially during the upcoming World Cup as this would represent an excellent opportunity for her to shine at an international competition after succeeding in putting on some very good performances during Euro 2022.

It will be also very important for her to help her team battle Barcelona and Levante until the last matchday, for the league title and for the second spot which qualifies for the UWCL.