Atalanta: The reasons behind La Dea’s recent struggles in the 2022/23 – scout report

When Atalanta started its winning streak of eight matches at the beginning of October, everyone thought they will be title contenders this season. So how did Atalanta perform afterwards?

The most concerning is those three lost matches against direct competitors for the Serie A’s Champions League spots. So far Atalanta has taken 1 out of 15 points from teams ahead of them it in the table. If Atalanta is expected to compete at the top of the table, taking points off rivals is compulsory, more than anything to demonstrate that the club belongs at the top of the table.

This scout report will provide a tactical analysis of Atalanta’s most recent matches this season. In this analysis, we will look at the changes made to Gian Piero Gasperini’s tactical approach. The Italian coach has made key changes within his tactics ahead of this season.

Although there have been changes to the team’s tactical approach, one thing that Gasperini hasn’t changed is his preference for a three-at-the-back formation. The 3-4-3, 3-4-1-2 and 3-4-2-1 formations have still been the main base formations used by Atalanta this season. These three formations provide the core for Gasperini’s philosophy and have done for most of his career.

As you can see other formations have been used situationally in different matches and for a certain period within matches. This itself is an indication that Gasperini wants to be more adaptable, not just to the opposition but to the players that have been brought to the club in the transfer window.

Atalanta’s shot-stopping prevention has been very poor over the course of the last matches. But not only was Atalanta’s shot-stopping prevention poor, but its own shot creation was relatively weak, comparatively speaking. Even though Atalanta may have produced three more non-penalty shots than their opponents, the quality was poor. Atalanta’s average shot was three yards further away, produced 2.5 times less xG, and 3 times less xGoT. The clear-cut chances that opponents were able to create were undeniably beneficial.

This is even more impressive given that e.g. Inter only had three shots on target excluding the own-goal. In key matches, Scudetto-winning teams are able to produce, convert, and capitalise on the necessary high-chance opportunities to steer the tide in their favour. Is Atalanta able to turn on the offensive switch and start doing the same to its opponents?

Some of the same worrying trends from last season are starting to creep back into the squad – mainly permitting too many good chances for the opposition that expected models tend to underrate. Atalanta will be on pace to concede over 54 goals this season if these goal trends continue, effectively eliminating Atalanta from Champion’s League contention. Just as a strong defence brought Atalanta to the top of the table early in the season, it has to be the priority to right all the wrongs of these last matches.

One of the reasons for this is that when Atalanta hasn’t got possession, a three-at-the-back formation with wingbacks enables Atalanta to transition into a five-man defence. This then provides them with the structure to be able to switch between a 5-3-2, and a 5-2-3 defensive shape throughout a match.

Under Gasperini, Atalanta’s defensive style has been identified with high-intensity and aggressive pressing and because of the man-to-man marking tactics, they haven’t been accustomed to defending against the ball with a specific defensive shape. Their defensive shape is usually dictated by the opposition’s attacking shape because each player man-marks all over the pitch.

This season has seen this approach adapted, the man-to-man marking approach remains a principle with Gasperini’s tactical approach, it just hasn’t been used continuously through a whole match. It’s used occasionally depending on the situation within the match, usually during the first period of the game against specific opponents.

The example below shows Atalanta’s varied approach sitting in a 5-3-2 high defensive block. They have condensed the space between the lines, but instead of being compact, they are defending with width. Midfielder Maarten De Roon is about to put pressure on the ball and switch the defensive block from a 5-3-2 to a 5-2-3 as they look to stop Fiorentina during their build-up. 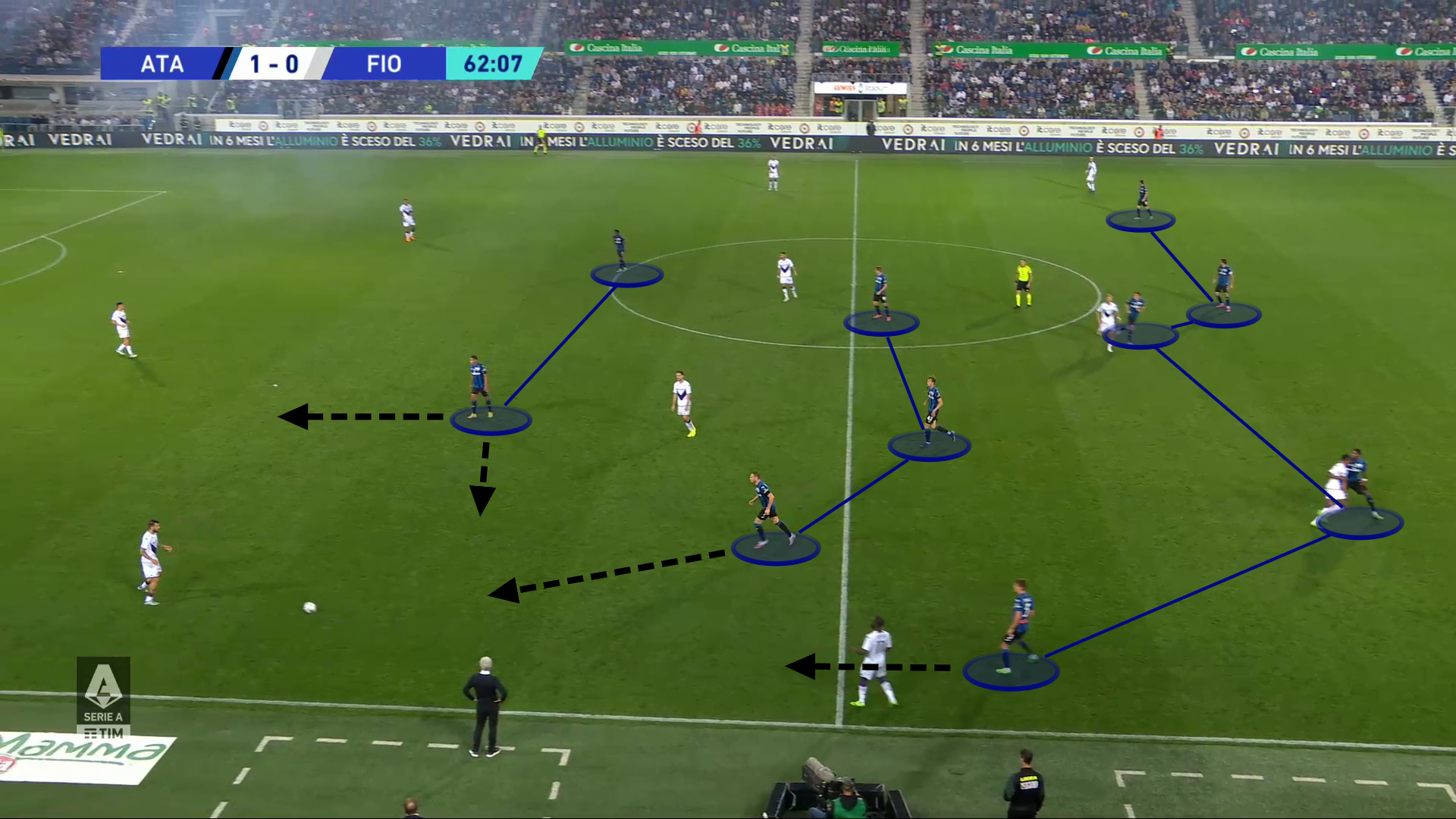 Instead of pursuing the ball aggressively, they are maintaining their shape and forcing the play into certain areas. The purpose of this type of defensive shape is to force the opposition wide by stopping any vertical progression through the centre of the pitch and forcing the opposition out wide where they can then press immediately without shifting across.

At the end of 2022, Atalanta had shipped seven goals during its three-game slide. The offences Atalanta have recently faced are undoubtedly of higher quality than before, but the recent run of defensive form is a far cry from what Atalanta fans were treated to in the early part of the season. High-level mistakes continue to bite Atalanta, and La Dea pay for it with clear-cut chances for the opponent.

In the match against Inter, Edin Dzeko’s brace came of chances of 0.47 xG on average, and he’s taking both of those chances right inside Juan Musso’s six-yard box. How Dzeko is able to live rent-free inside the six-yard box is puzzling, but it isn’t a freak occurrence. Both Victor Osimhen and Federico Baschirotto’s recent goals against Atalanta have also come from less than five yards away from the goal line. 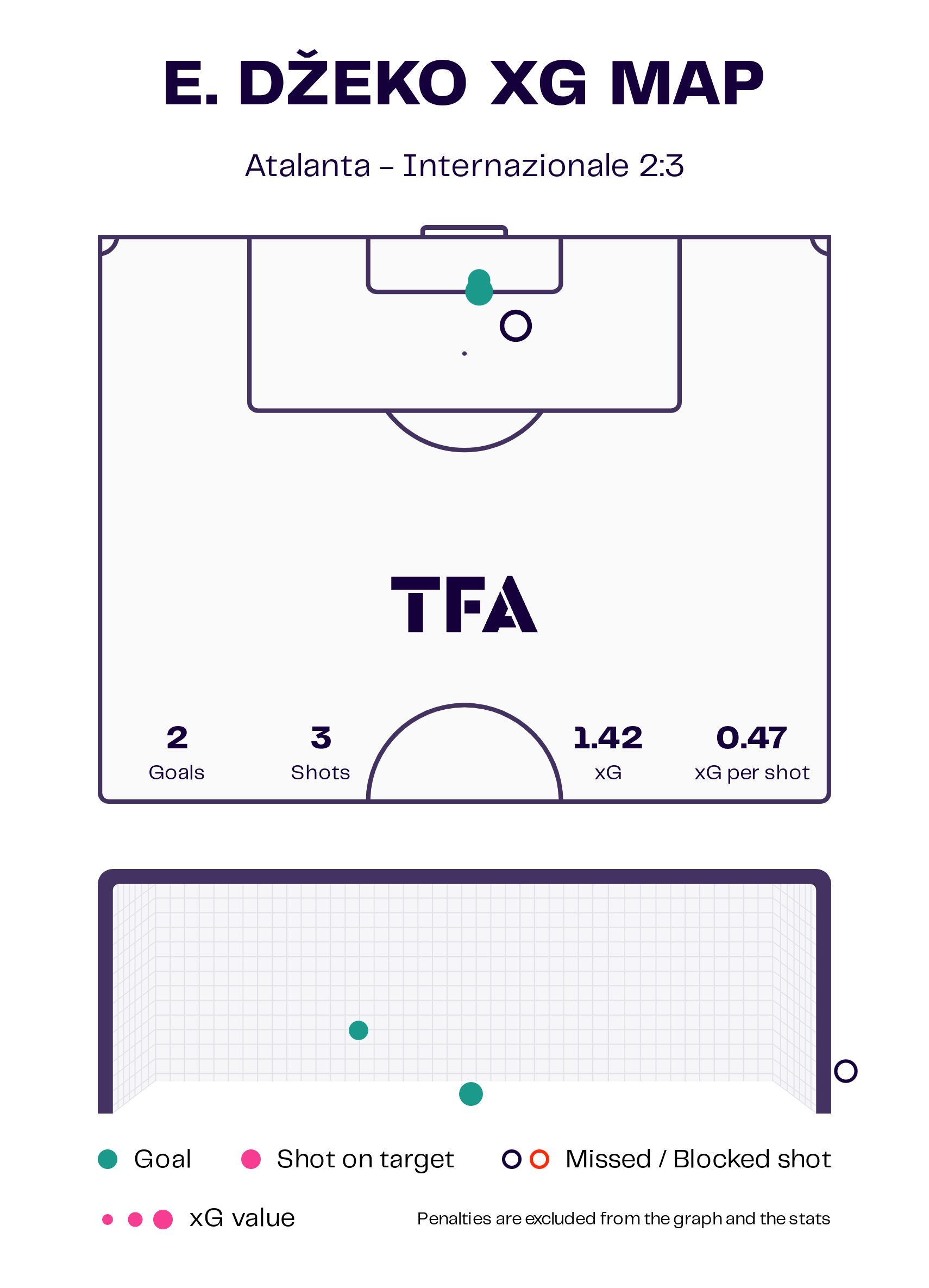 Meanwhile, out of all of Atalanta’s 16 shots against Inter, only the improbable headed goal from Palomino was shot from less than 10 yards away. While Palomino’s goal did give Atalanta one last chance at securing a draw, it wasn’t meant to be. Two goals seems to be Atalanta’s limit this season, and it hasn’t been able to break that iron ceiling and hit the three-goal mark since Torino at the beginning of August. 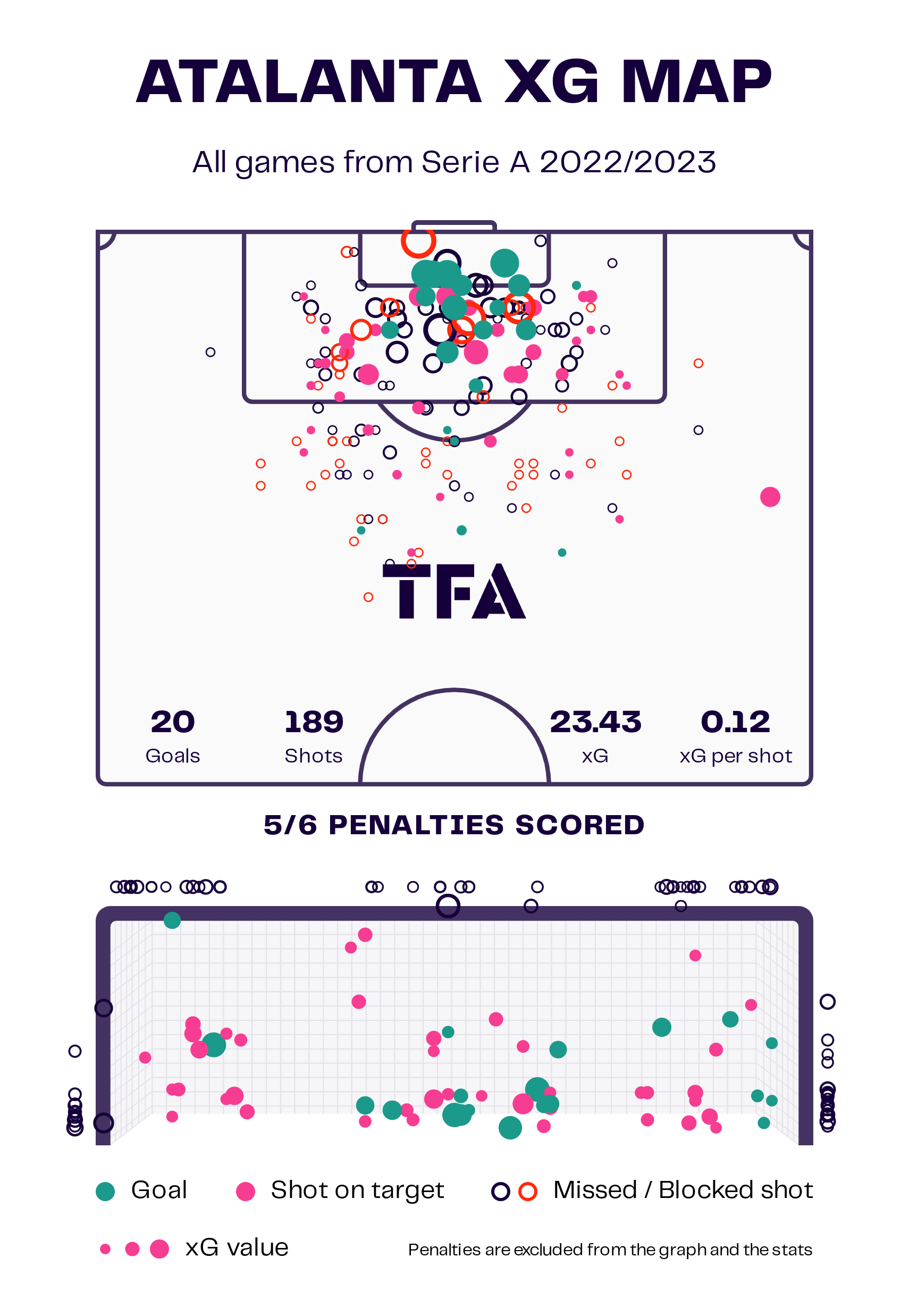 The tactical approach we have seen throughout Gasperini’s tenure at Atalanta is focused on attacking. Playing with a high tempo in possession and defending with aggression and intensity out of possession.

Their attacking play was varied. It was never set on a specific passing style. They focused on attacking through the wide areas and half spaces by creating overloads and affecting them with combination play. The team would form their wide attacks through the use of transitional play, both vertically and laterally.

These next images show examples of Atalanta generating overloads through wide areas. Both situations show Atalanta maintaining possession and creating a 4v3 overload. 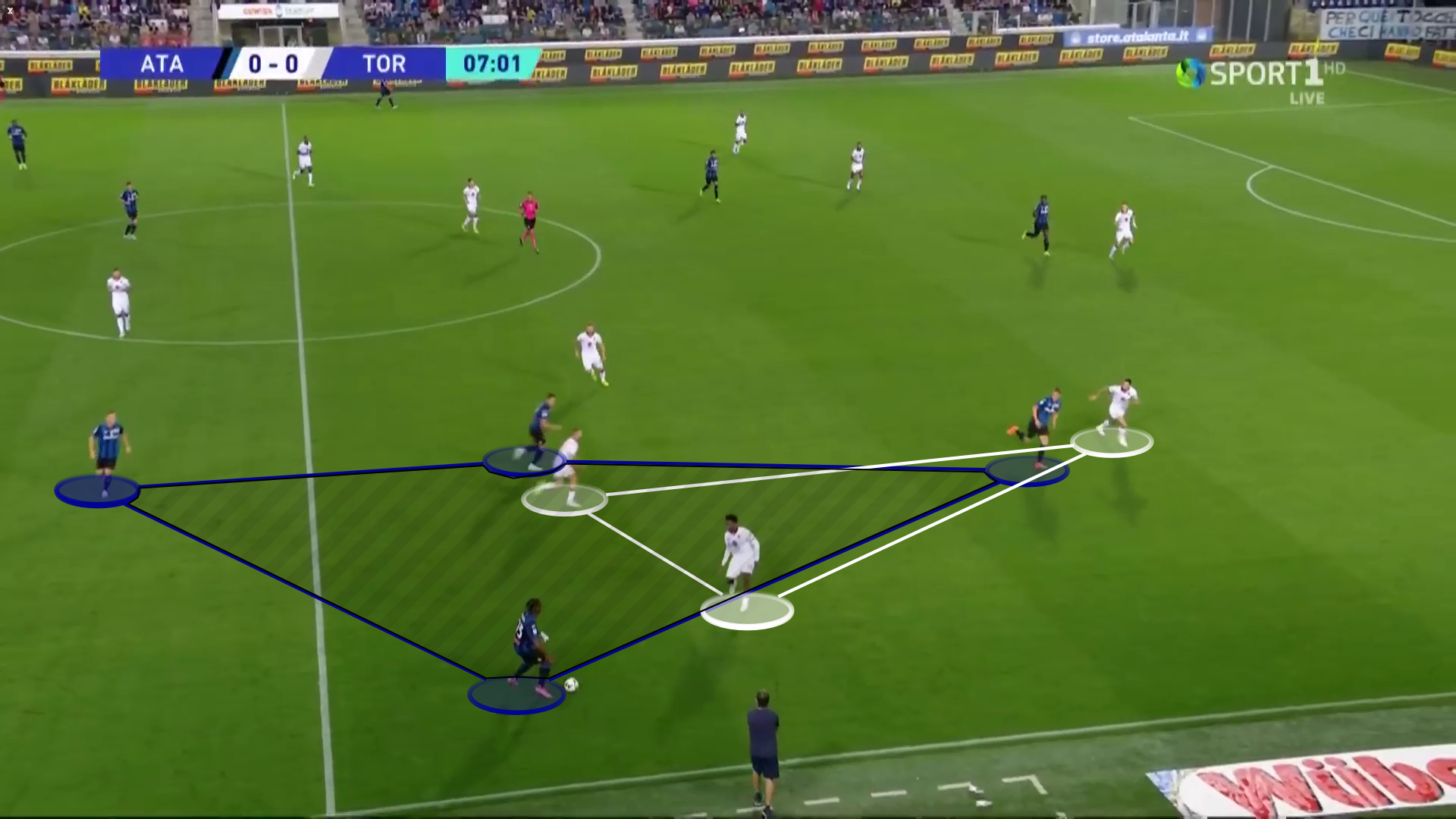 The aim was to ensure the team kept the ball more than the opponents and scored more than their opponents. Last season, Atalanta’s average possession was 53.9%. Although it has never been the highest in Serie A, it has always been towards the top end of the table.

Long balls have been a key aspect of Atalanta’s new approach. The team are still playing out from the goalkeeper during the build-up phase but instead of trying to play out through each third of the pitch vertically, their build-up approach is to attract the opposition towards the ball and then Atalanta attempt to hit it over them and directly into the attacking third.

The first images show the build-up structure Atalanta use from a goal kick. They build up in a 3-4 structure. Six Fiorentina players have pushed up into a high block to stop any ball progression from the build-up. The goalkeeper does not take the goal kick, as Caleb Okoli starts the play and passes to the goalkeeper, who then takes a long goal kick and doesn’t play out through the defence. 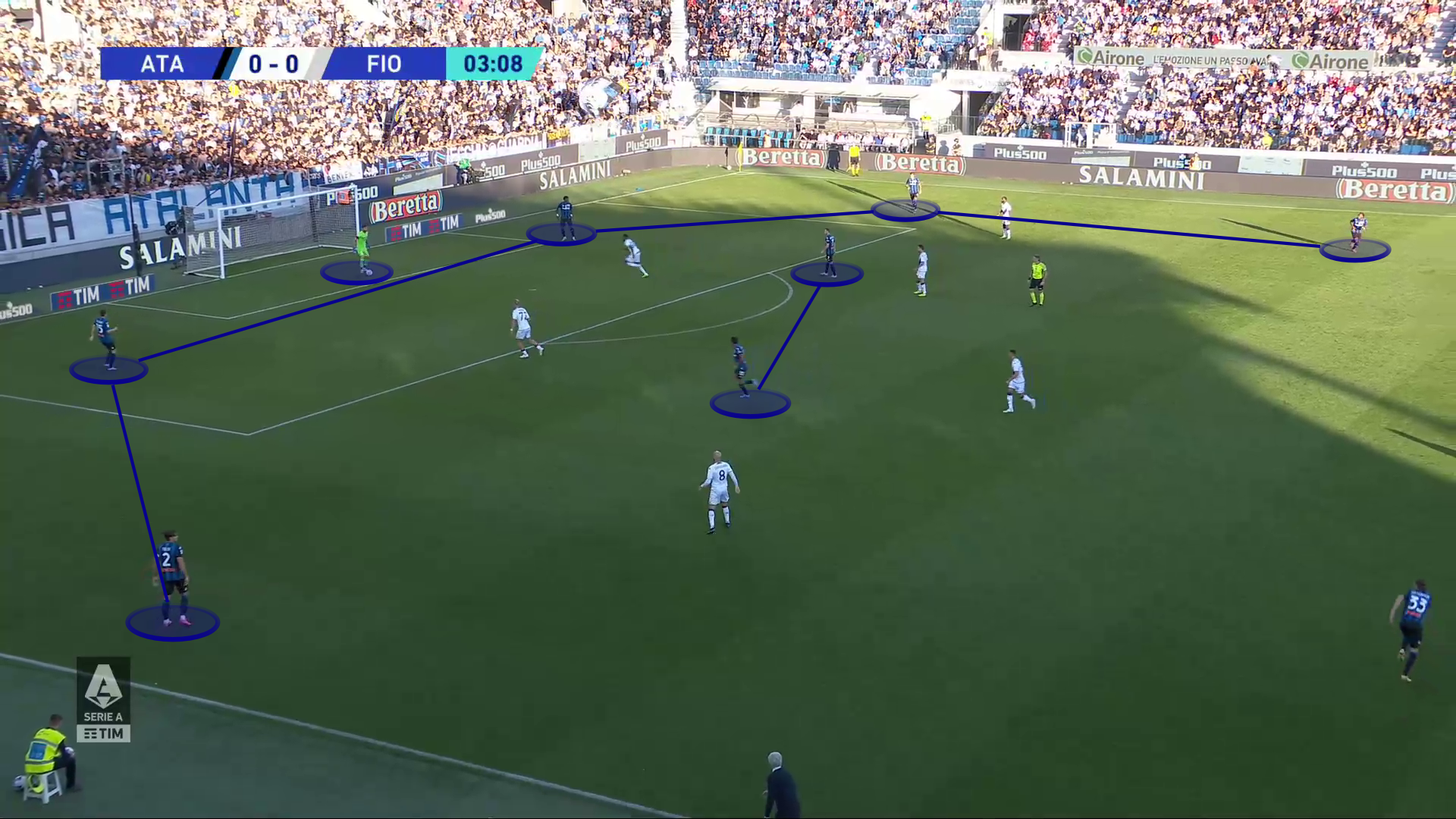 The Danish teenager Rasmus Hojlund has gotten off to an energetic but uneven start to his career in Bergamo. His limitless work rate and hustle have helped him be the beneficiary of some of Atalanta’s best chances this year. Unfortunately, he is not converting those great chances.

Of the 12 shots Hojlund has taken this year, seven have registered an xG greater than 0.19, only one has found the back of the net. However, the sheer quantity of excellent chances that Hojlund is able to create for himself cannot go unnoticed. He obviously has a nose for the box, he just needs some more seasoning to have his finishing match the eliteness of his positioning. 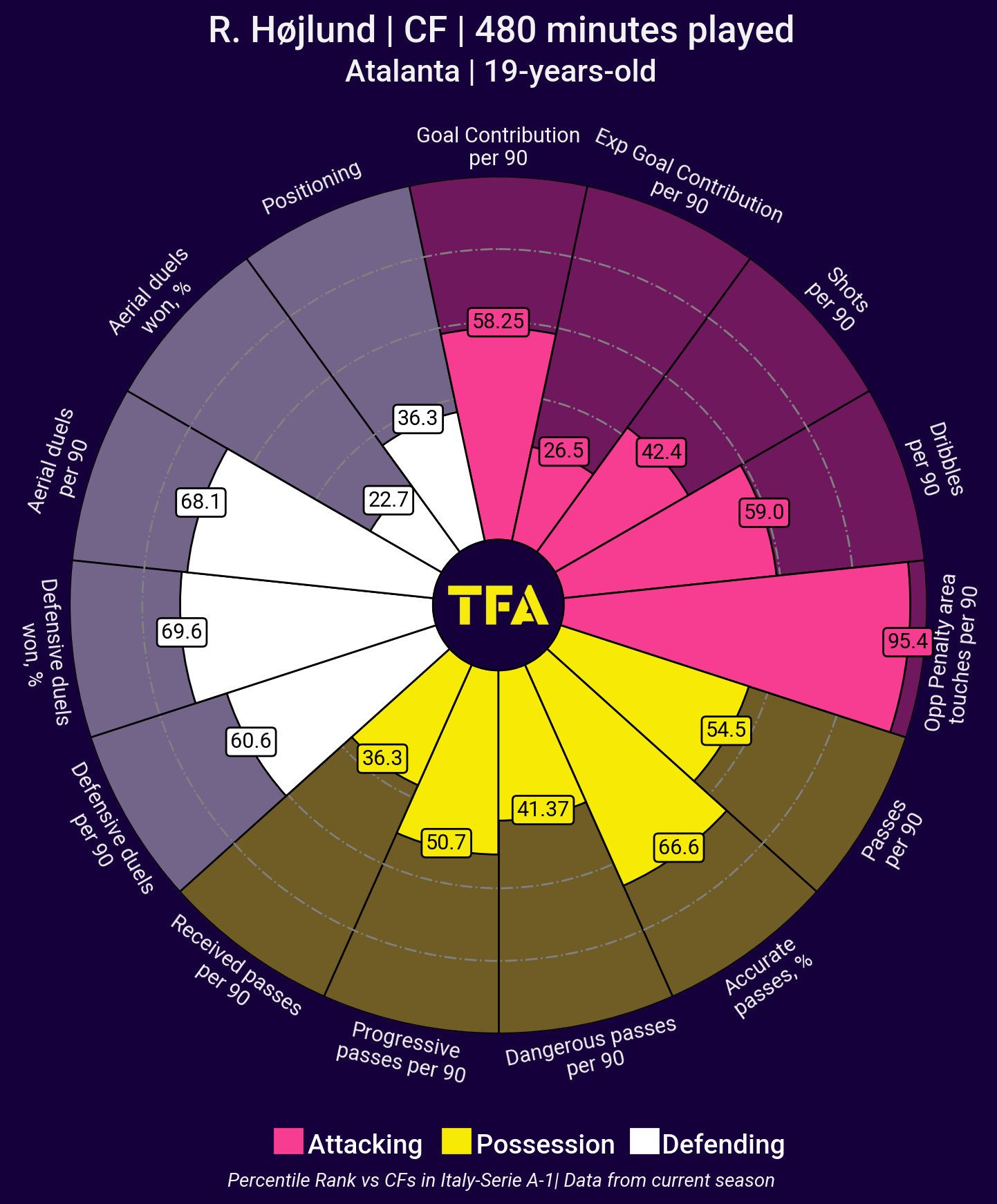 In a one-to-one comparison between Hojlund and Duvan Zapata, Hojlund may be the better bet right now to convert more goals. Zapata has been hurt a fair amount, but Zapata’s 13-shot opportunities come nowhere near the quality of the shots Hojlund has taken (only three opportunities over that 0.19 xG). This has a lot to do with average shot position. 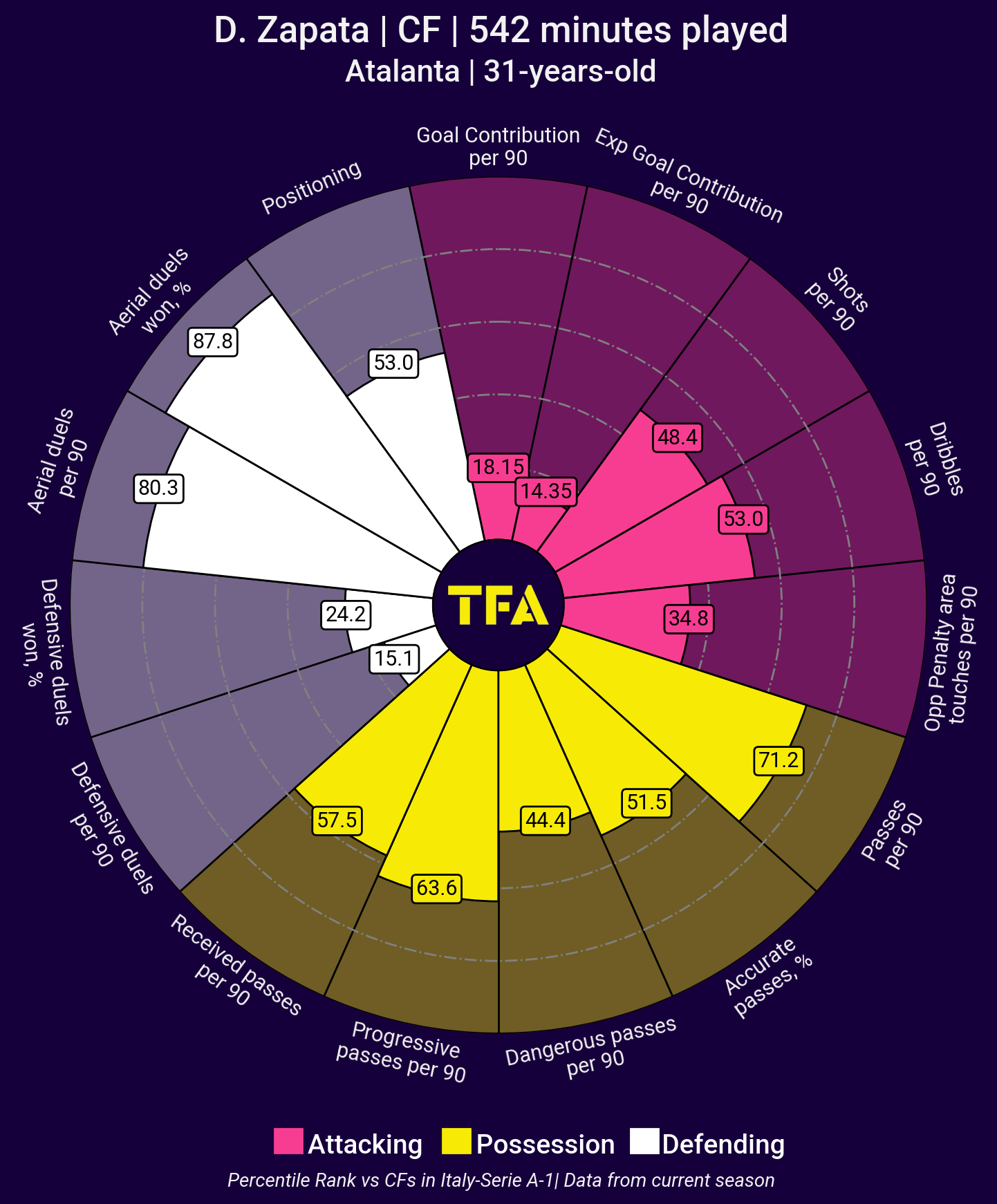 Right now, for a team that needs to create and convert easier chances, give me the guy who is swimming around the box looking for those opportunities right around the penalty spot. Zapata has value to his game in the build-up, but with the emergence of Maehle on the left, and hopefully Ederson’s continual improvement in the midfield – Atalanta has other ways to progress the ball forward, and realistically should not have to rely on Duvan to facilitate creation and to score.

Traditionally under Gasperini, Atalanta have ways been dangerous in a counterattacking situation, as their attack-minded approach demanded that the team counter through quick transitions once the ball was won.

However, no matter how dangerous they were, counterattacks have never played the main part in Atalanta’s tactics as much as they have this season, as their tactical approach is not as focused on keeping possession and transitional play as much as it has been in previous seasons.

The next two images show how Atalanta’s defensive shape sets up its counterattacking strategy.

Atalanta’s five-man defence is sitting in a low block defending a cross against Monza. The three midfielders were sitting centrally in front of the defence, squeezing the space between both positional lines. As the cross was cleared towards the wide area, you can see how Gasperini’s men have eight players behind the ball. 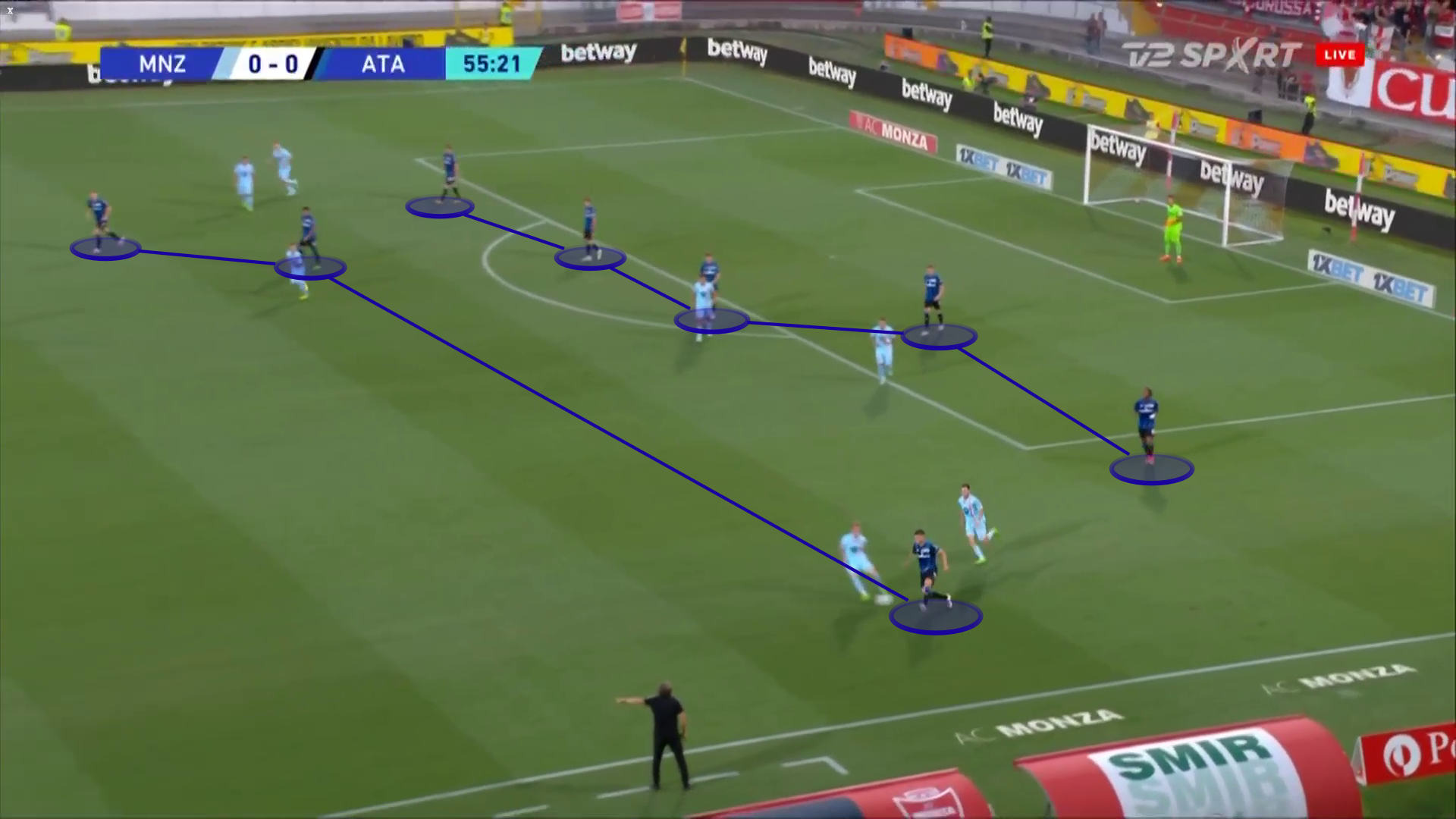 As we’ve already mentioned in this analysis, attacking and exploiting the space in the wide channels and half spaces is a common tactical trait from Atalanta as it forms part of Gasperini’s philosophy, only now the team is attacking the space with direct play rather than combination play.

His blunder covering Edin Dzeko for Inter’s second goal prevented him from becoming Man of the Match, but his offensive output continues to be important – even if it isn’t yet translating to goals either for himself or his teammates. 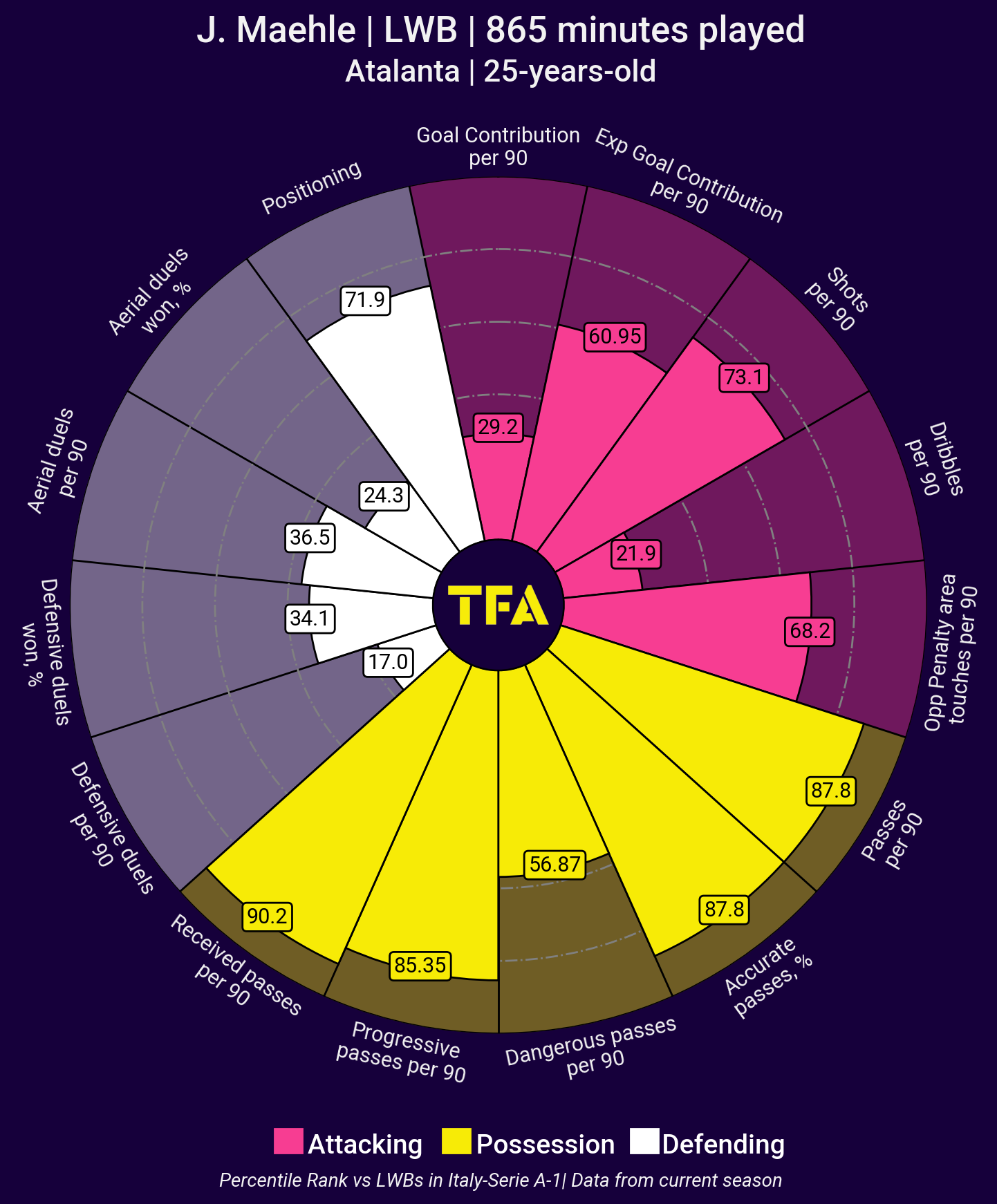 The details in the current season become suffocating, preventing the Atalanta fans from grasping the full picture. While the loss to Inter capped off an unimpressive run of form, let’s not forget that it should still be coupled with the excellent form displayed to start the season, and one or two tweaks could have this team firing on all cylinders once again. In the last two matches of the new year, Atalanta already came back with 4 out of 6 possible points.