KRC Genk suffered a disappointing season in the Belgian Pro League 2019/20. Finishing down in seventh, they ended up five points adrift of European qualification, far below their expectations. Former Bundesliga manager Hannes Wolf struggled to bring success to a side who lost key players such as Mbwana Samatta, Leandro Trossard, and Sander Berge to the EPL.

Replacing the likes of Samatta was always going to be difficult, with the striker being one of the best players in the Pro League. Paul Onuachu of FC Midtjylland joined in at the start of last season and managed a respectable nine goals in 22 appearances. Yet other than Onuachu, striking options for Genk are limited. Therefore, adding a second striker was a must before the start of the 2020/21 season.

Cyriel Dessers is the striker Genk have decided to invest in to help provide the side with more goals. Dessers had a fantastic season in Holland with Heracles Almelo, scoring 15 league goals and grabbing five assists. Far smaller than Onuachu, Dessers will offer Genk a different approach, either on his own or alongside the target man as a second striker.

This tactical analysis, in the form of a recruitment analysis, will look at how Dessers could fit the tactics of Wolf. The analysis will look at the strengths of Dessers and where he may fit into Genk’s system. On the face of it, the signing of Dessers looks like a fantastic piece of business for Genk.

First of all, we will compare how Heracles set up last year in comparison to Genk. At Heracles, Dessers was used as the main striker, either in a 4-4-2 system with the second striker playing just off Dessers, or in a 4-2-3-1 or 4-4-1-1. In Belgium, Genk predominantly operated with a 4-2-3-1 formation but did occasionally deploy a 4-4-2. With both Dessers and Onuachu, they could play the 4-4-2 more often in order to get both players in the side.

In terms of pressing from the front, Heracles averaged 9.75 recoveries per 90 in the final third, around 12% of their total recoveries. Genk on the other hand averaged 11.08 in the final third, at a slightly higher 14%. When we then look at the pressing intensity data, Heracles sat fifth overall with a 10.47 average per 90, while Genk were up in third with around 8.7. Dessers will therefore only see a slight increase in pressing while at Genk, and will by no means have to adjust to a completely different system. For a player who did most of his counter pressing in the final third, he should be a good fit for Genk to press even more. 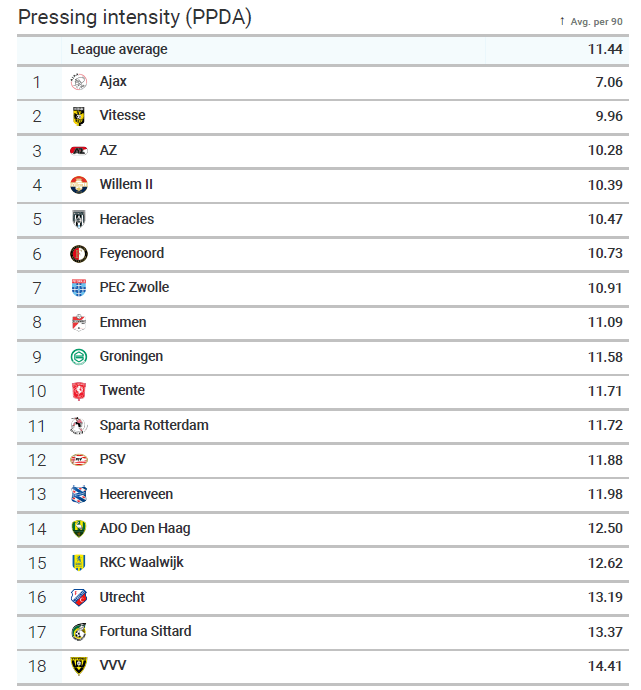 Where Dessers will notice a change is in possession. Genk are, in comparison, a bigger domestic side than Heracles are in Holland, and this is reflected in the possession stats. Genk averaged 54.2% possession per 90, while Heracles were just under 50 with 49.9%. Again, these are marginal differences that probably won’t affect Dessers’ game too much, although he may well see more chances at Genk than he did at Heracles purely on the basis of his side having the ball a fraction more. 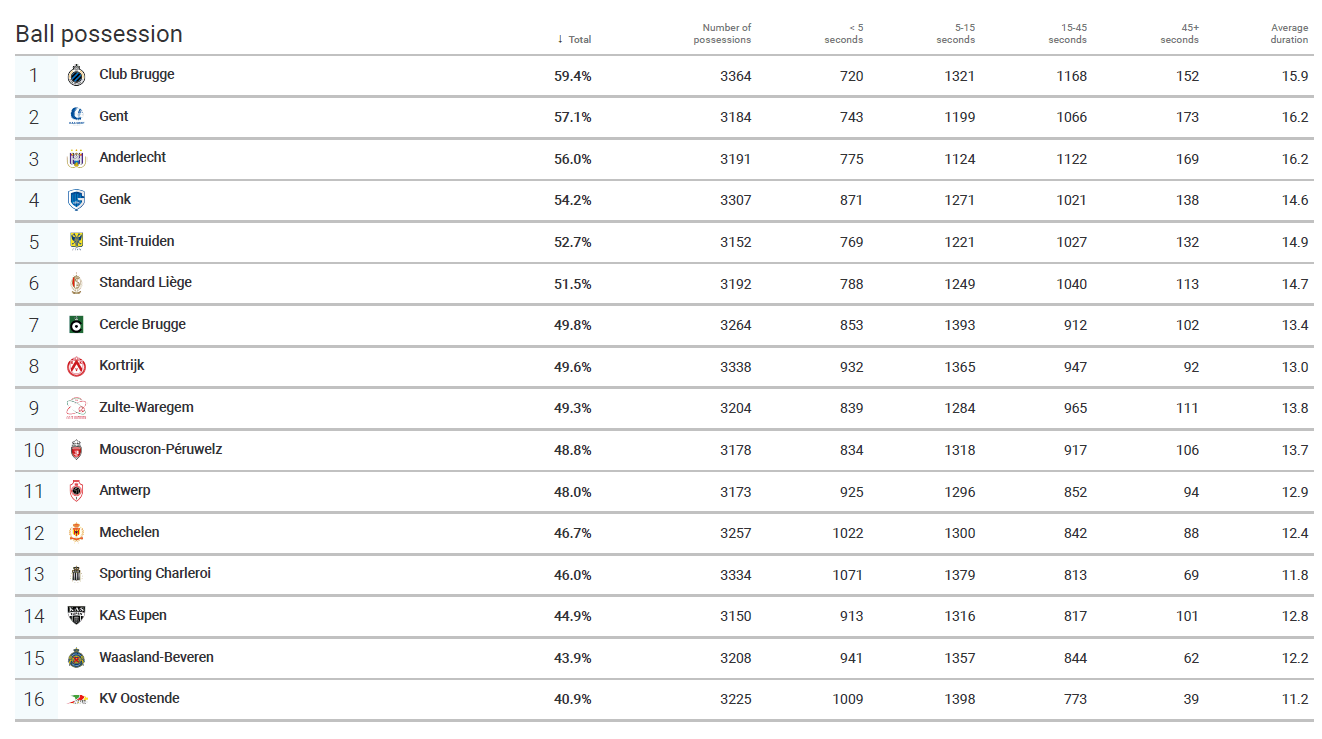 One final area that Dessers may have to adjust to is the attacking approach of Genk compared to Heracles. In terms of crossing, Genk were the third highest crossers per 90 in the Pro League, averaging 18.03 with a 32% success rate. Heracles on the other hand only averaged 13.08 per 90 with 30% success rate. The difference may be accounted for through possession, with Heracles perhaps improving those numbers if they had more possession. Dessers will have to anticipate that he will receive a greater number of crosses with his new side, which he should enjoy as it increases his chances to score.

Dessers will bring a fantastic striker’s instinct to Genk for the 2019/20 season. When we look at the below shot graphic, we see that only two of his 20 overall goals this season came from outside the box. He has an impressive 22.4% conversion rate when taking shots inside the box. With creative players like Junya Ito and Mats Moller Daehli behind him, Dessers will have plenty of service and won’t have to contribute to the build-up play, instead focusing on getting in the box. 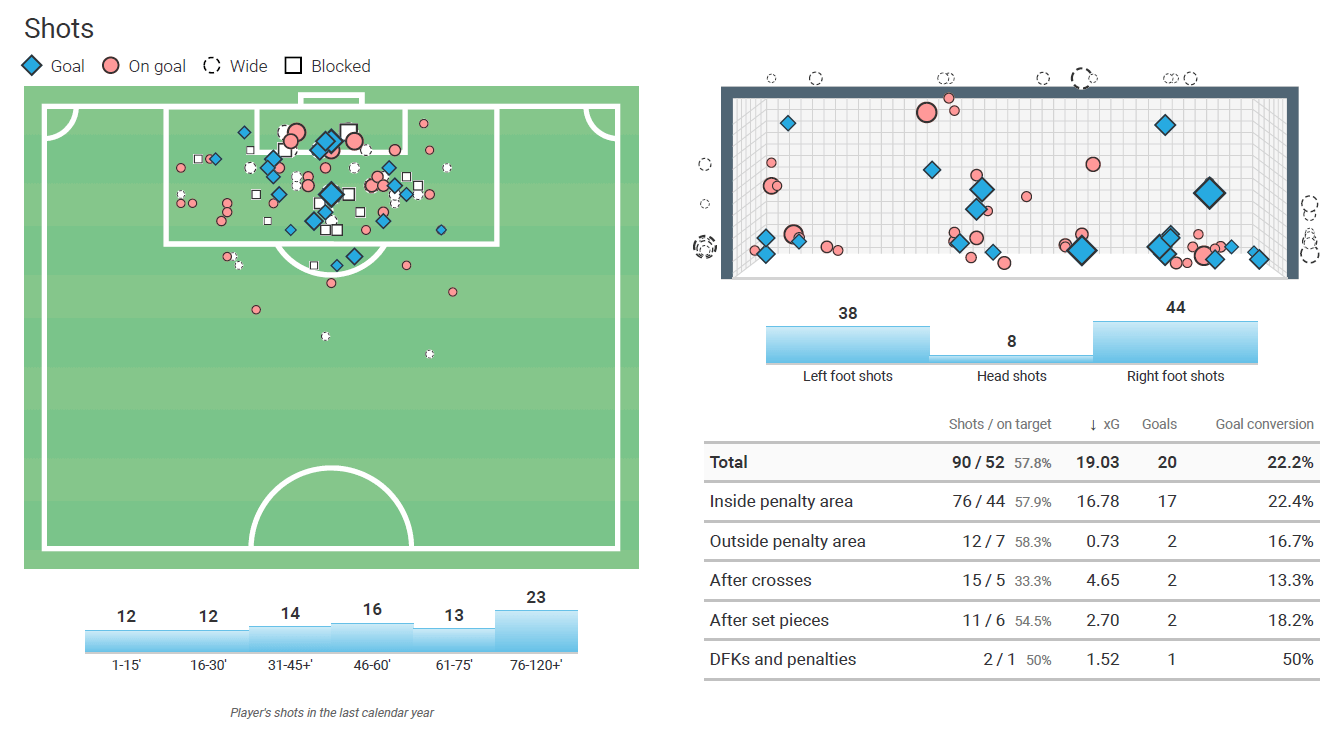 With an average of 5.72 touches in the box, it appears Dessers is taking 2.95 shots per these touches. Overall, Dessers has an xG per shot of 0.21, by far the best of the top five in the Eredivisie. Clearly Genk need to improve their conversion rate, as they took the fourth most shots on average per 90 in the Belgian Pro League at 12.70. By bringing in Dessers, Genk will be hoping his lethal finishing ability will improve their conversion rate.

Finishing is as much down to positioning as it is technique. Getting in the right position is crucial, and is something Dessers has shown he is capable of. Add to that his calmness and composure, Genk fans should certainly be excited about this new addition.

For example, in the game against ADO Den Haag, we see his ability to read the game and then provide a composed finish. In the first still, we have him highlighted here, ready to make a standard run across the centre back into the gap ahead of him. He is taking advantage of the winger having dropped deeper, dragging the full-back out of position. 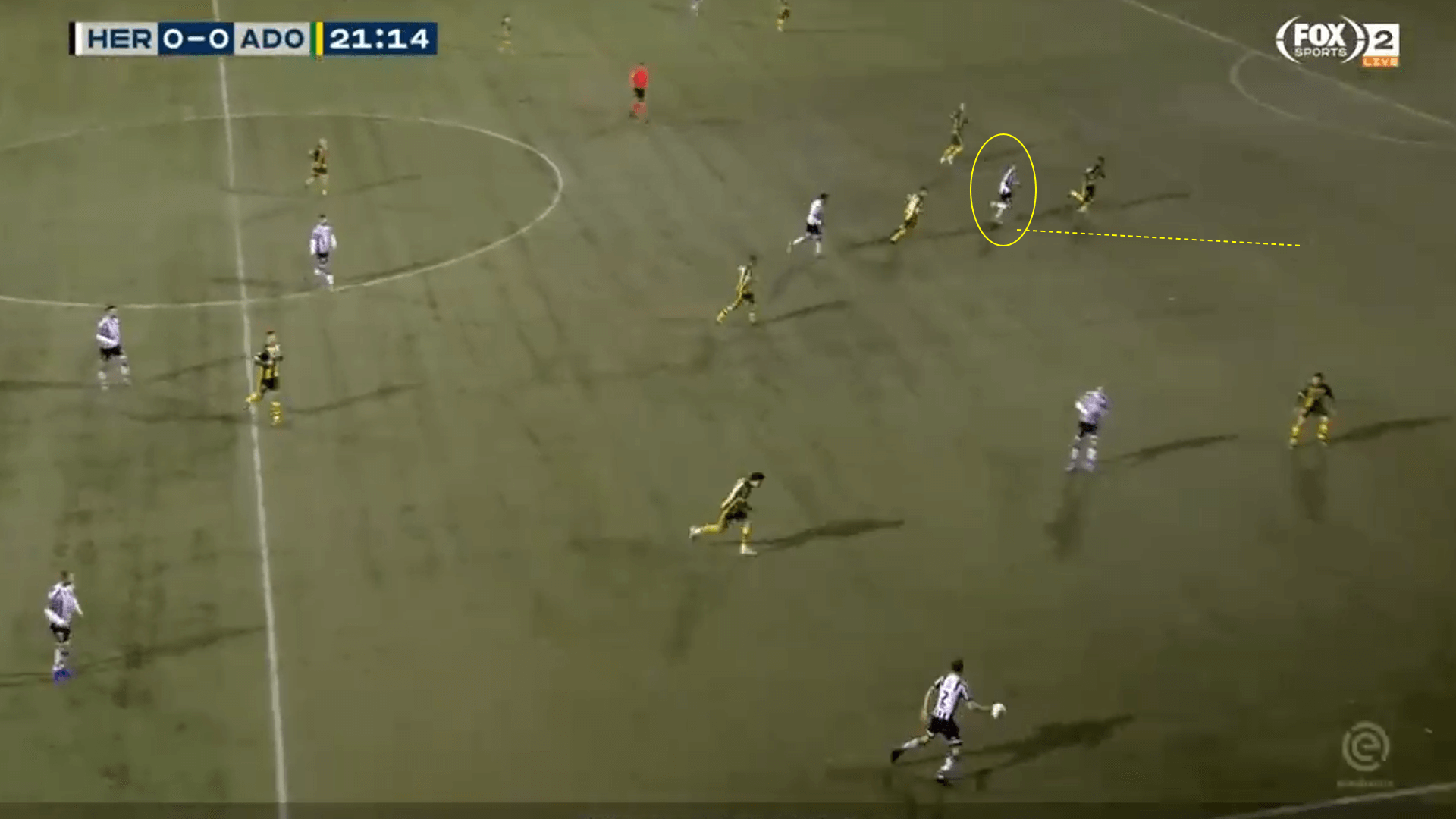 Unfortunately, the run is not spotted, and instead Heracles decide to work the ball amongst the midfield. Dessers now drifts inside, having noticed that the build-up is happening on the wing, and he needs to provide the option in the box. After a nice build-up play, we see that Dessers is now working on the other centre back and has him isolated in a one-on-one, which has this time been spotted by the midfielders. The most obvious option for the striker in this situation would be to get the ball down and continue to run in the same trajectory towards the goal. 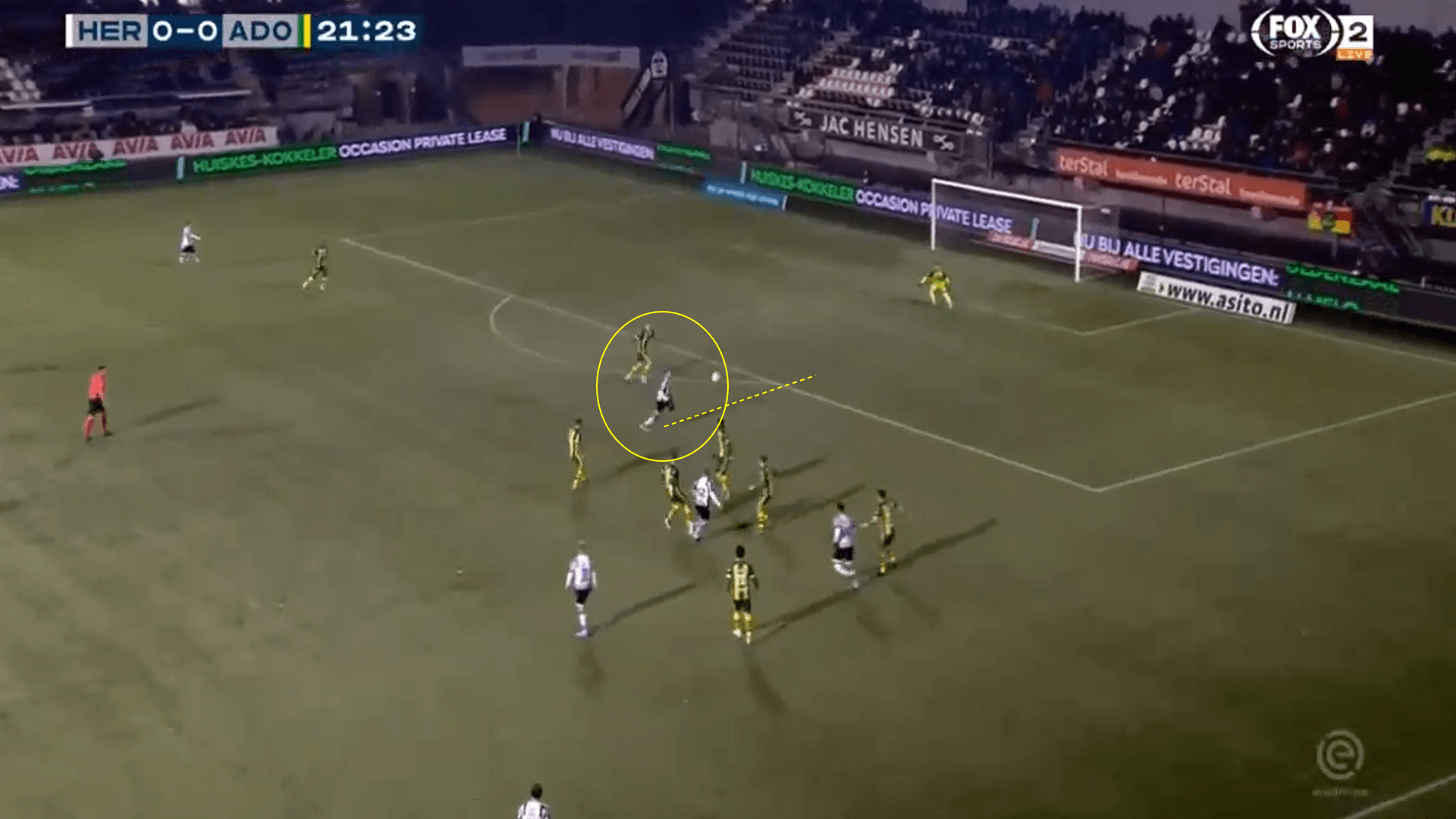 However, here is where we see the intelligence, technical ability and composure of Dessers. Instead of bringing the ball down to continue into space, he drags it across the defender, catching him by surprise and forcing him off balance. This opens up a better shot for the striker who finishes calmly. 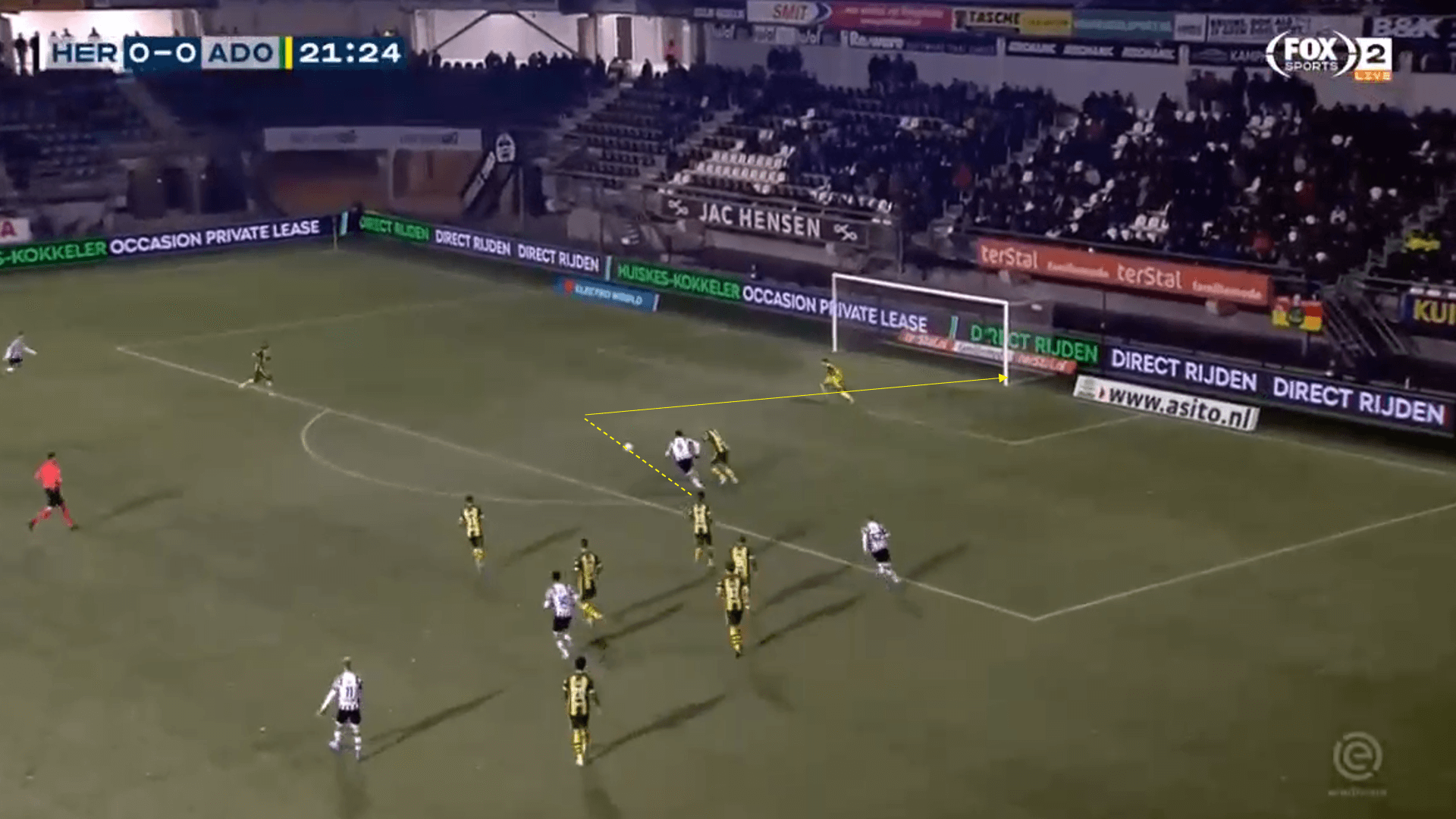 This example gives us a clear indicator of why the xG per shot of Dessers is quite high. He looked in this situation to increase the chances of getting a better shot. Rather than have to get a shot away from a tighter angle, he uses his technical ability to create a better shot for himself and ultimately scores a quality goal.

Alongside his finishing ability, Dessers will also bring an eye for an assist. With five assists in the 2019/20 season, Dessers was in the top 10 for his position, exceeding his 3.77 xA and averaging 0.18 assists per 90. Drifting wide to cross the ball is not part of Dessers’ game, so Genk shouldn’t expect him to operate outside of the width of the penalty area too often. As his finishing has shown, they need to ensure he gets touches in the box, rather than having to run down the channels. Statistically, Dessers averaged 1.24 crosses per 90 with only 14.71% accuracy. 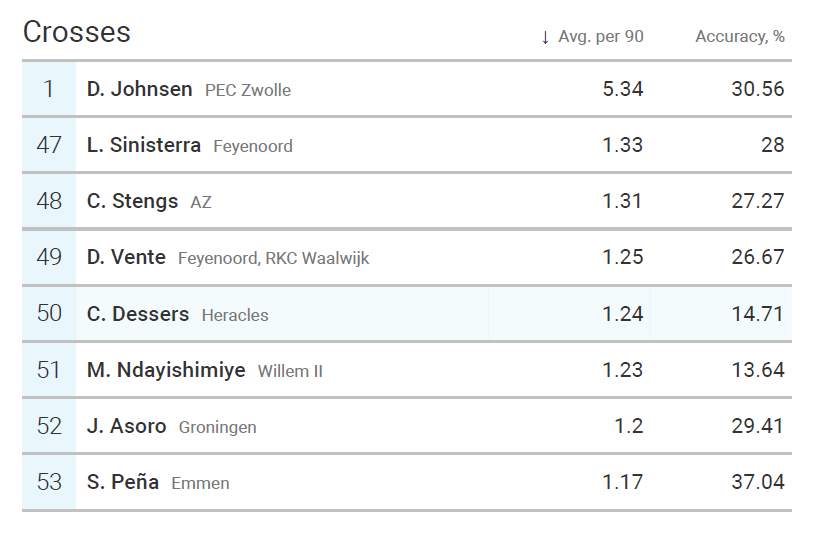 Much like his desire to create better shots, seeking better opportunities for his team mates is also part of Dessers’ game. Even though the majority of the time he is the player finishing off moves, he has an eye for how he can ensure those alongside him also have chances to score.

For example, in the game against VVV Venlo, we see Dessers below highlighted in the box. With Heracles already three goals to the good and Dessers having provided one of those, the defenders are gravitating towards him at the top of the pitch, leaving a gap into which we see one of the other Heracles players bursting into. 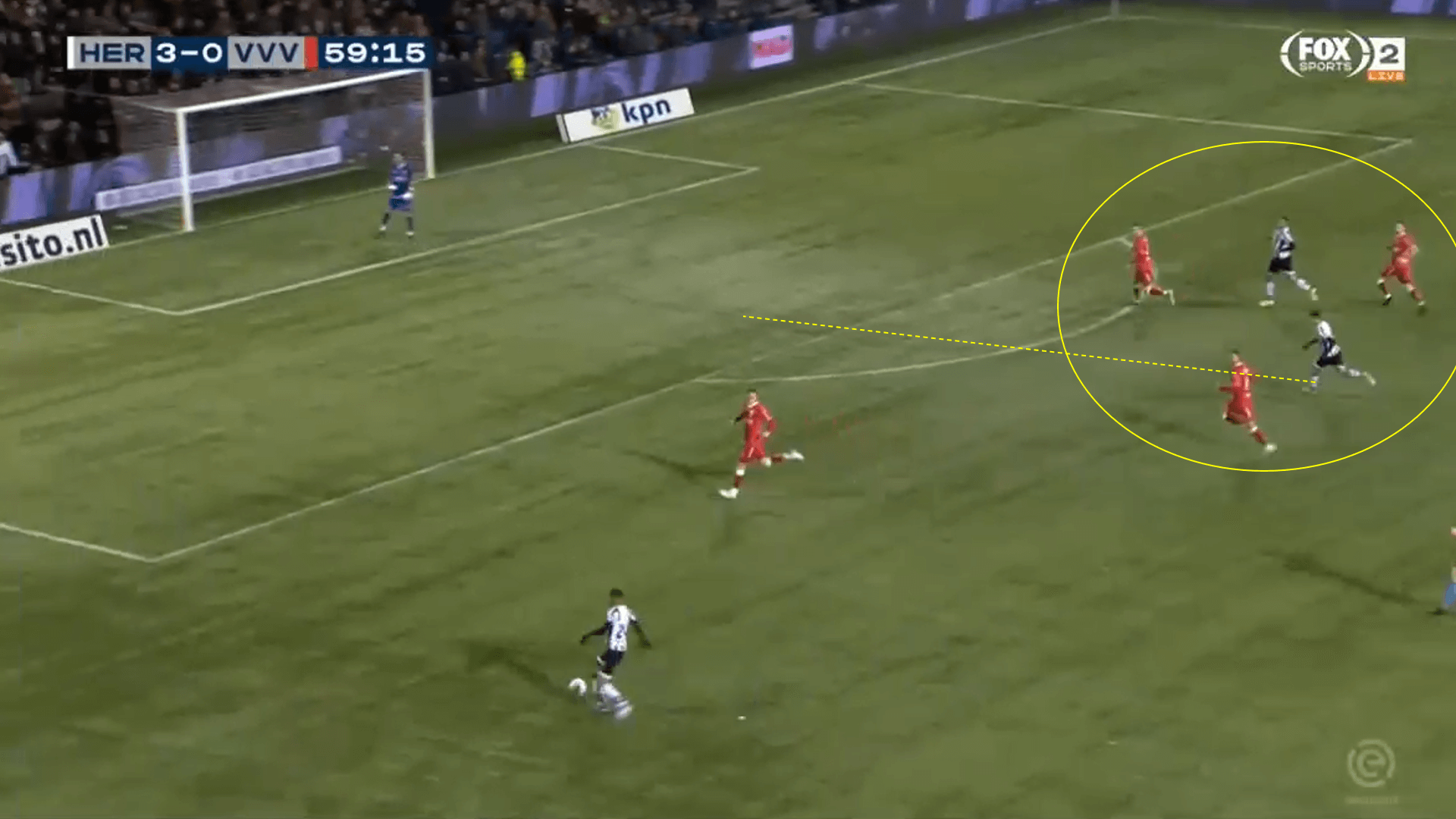 In the next image we see that when the cross came in, Dessers drifted away from his markers to the back post and was left completely alone. Despite having a free header, he realises that if he heads it across, his teammate is in an even better position to score. The striker had every right to go to goal from this distance but instead exhibited his unselfish play as well as his footballing intelligence to lay it off to his teammate. 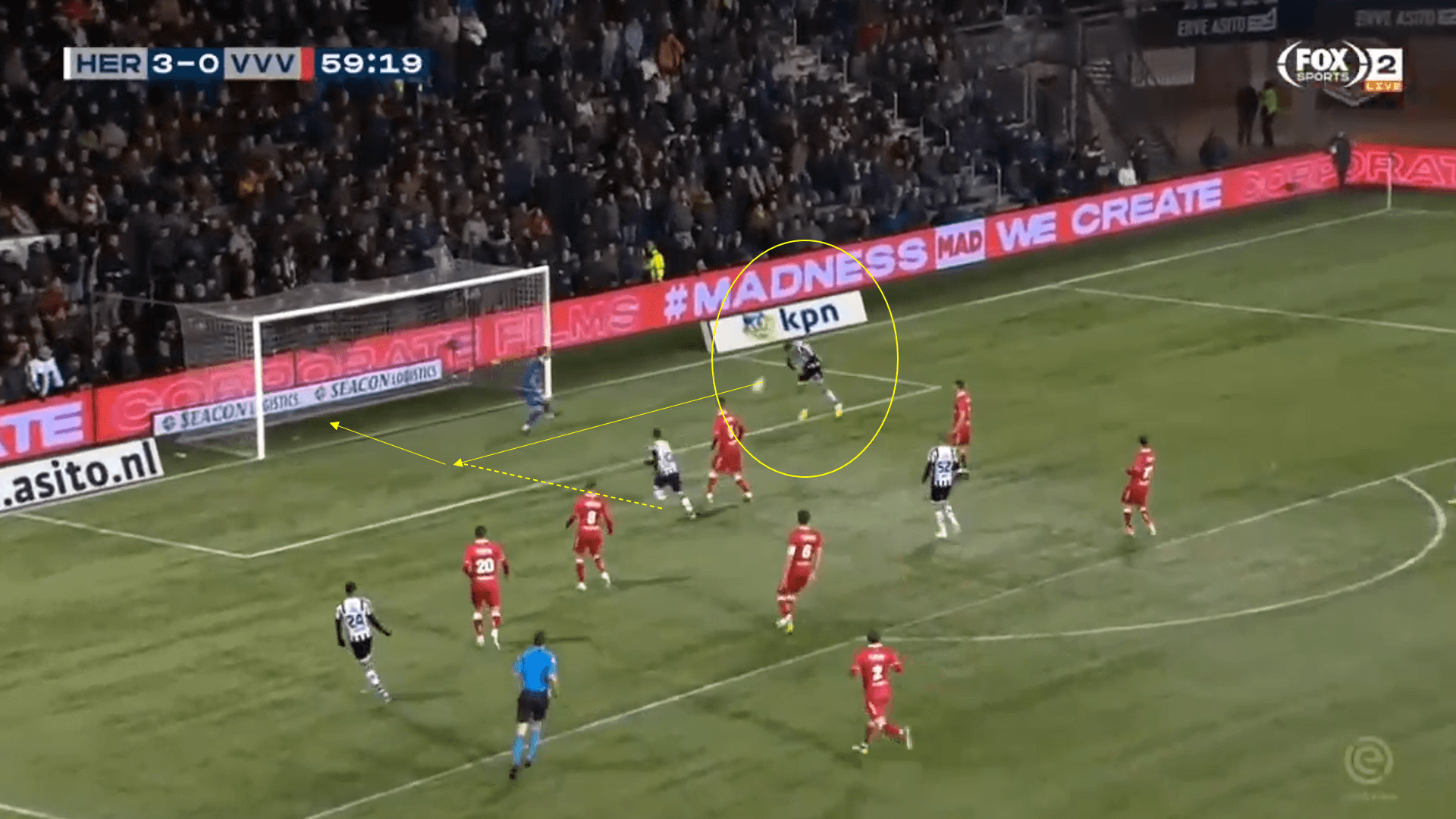 With players like Ito looking to get into the box, Dessers will have plenty of opportunities to increase his assist numbers. Genk’s players themselves should enjoy playing alongside a striker who can finish with either foot but is also willing and able to provide them with chances too.

All in all, it is hard not to be excited about Dessers as a Genk player next season, while also being somewhat surprised that they were able to complete the signing. With a four-year contract, it would be surprising if he stays in Belgium for the entirety of the deal. If he can replicate his Heracles form in the Pro League, it won’t be long before bigger European clubs will come looking for him.

Not having any European football could help Genk really turn their fortunes around next season, and a player like Dessers could be central to that. Alongside Onuachu, Genk may well have found a way to replace the goals once scored by Samatta.